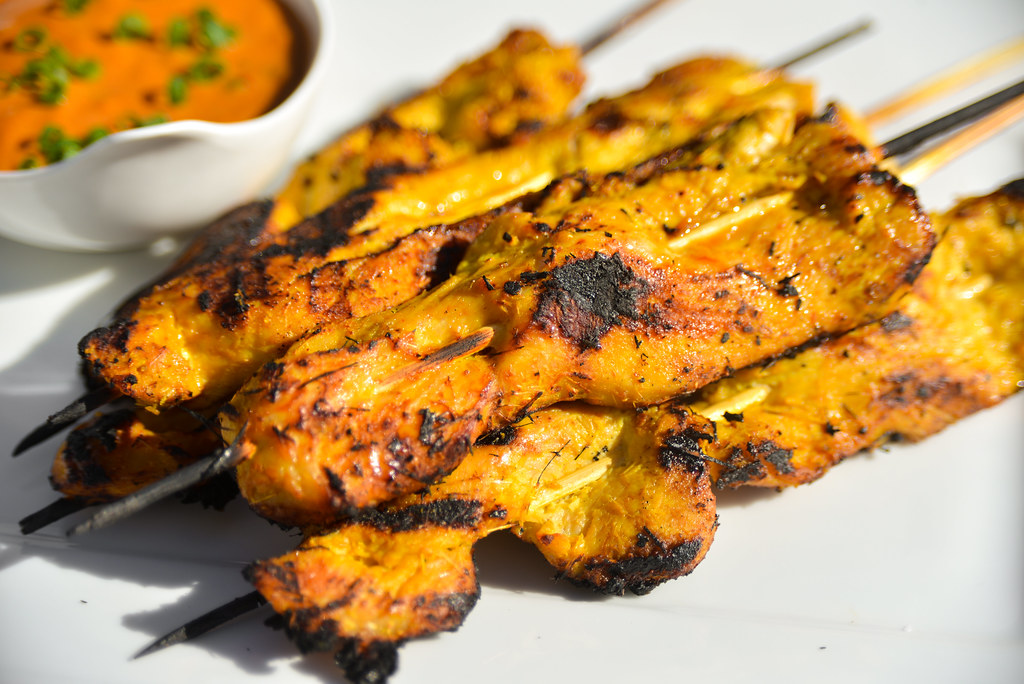 I can totally get behind a beef satay—thinly sliced, marinated flank steak becomes incredibly delicious when well seared over a scorching fire—unfortunately I can't say the same for chicken satay. Sure, the components of the marinade are more noticeable on chicken, but it's the lack of flavor and fat in the meat itself that makes it comparatively flavorless and, all too often, dry. So I approached making this Thai chicken satay with some low expectations, but luckily the final product left me pleasantly surprised. 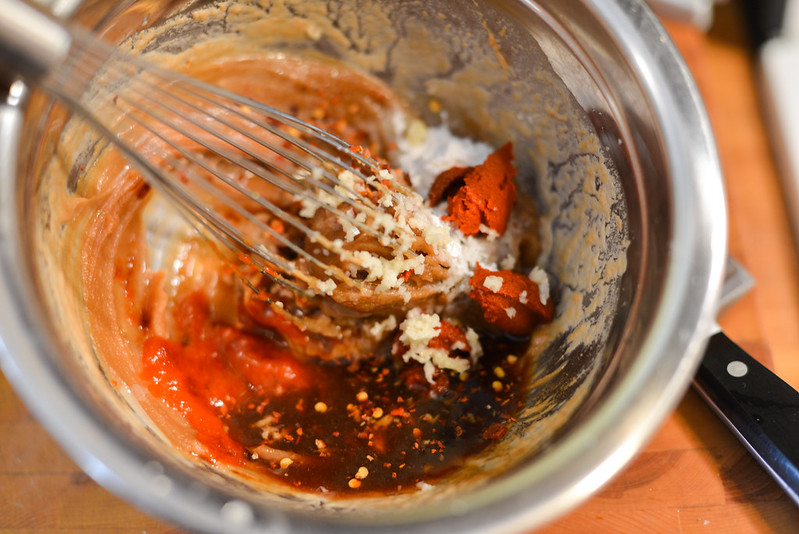 From the outset, I assumed this chicken would be a little dry and require extra assistance in the flavor department. Preparing for what I assumed was the inevitable, I whipped up a powerful peanut sauce that could be used as corrective dip after the chicken was cooked. Thinking the standard peanut sauce wouldn't go far enough, I gave this one a spicy depth that added Thai red curry paste, Sriracha, and red pepper flakes to my base recipe that's composed of creamy peanut butter, brown sugar, soy sauce, vinegar, lime, garlic, and scallions. 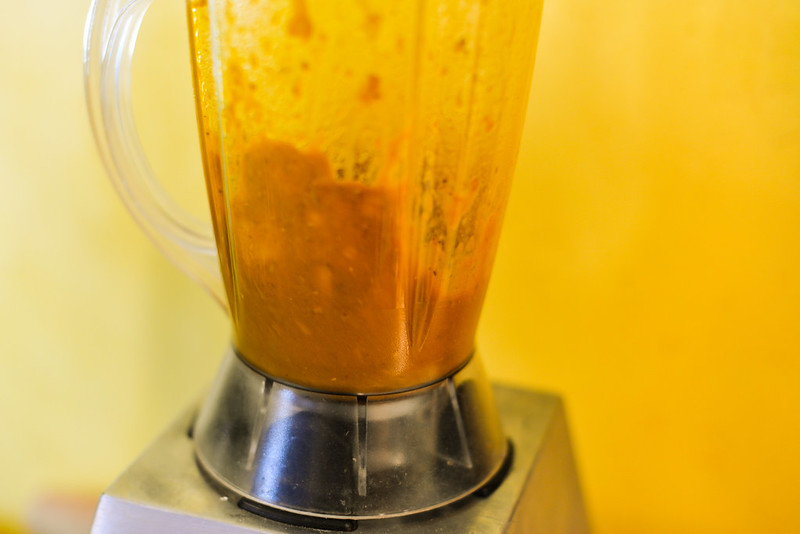 Now that I had a plan for what I figured was inevitable failure, I went to work at trying to make the chicken excel beyond expectations. This came mostly by pushing the flavors of the marinade. This is likely a deviation from what a more traditional satay recipe might be, but I thought if I pumped up the marinade with a hefty amount of fish sauce, soy sauce, palm sugar, and lime juice against the more subtle lemongrass, turmeric, and coriander, I'd have a good chance of getting the chicken saturated with flavor. 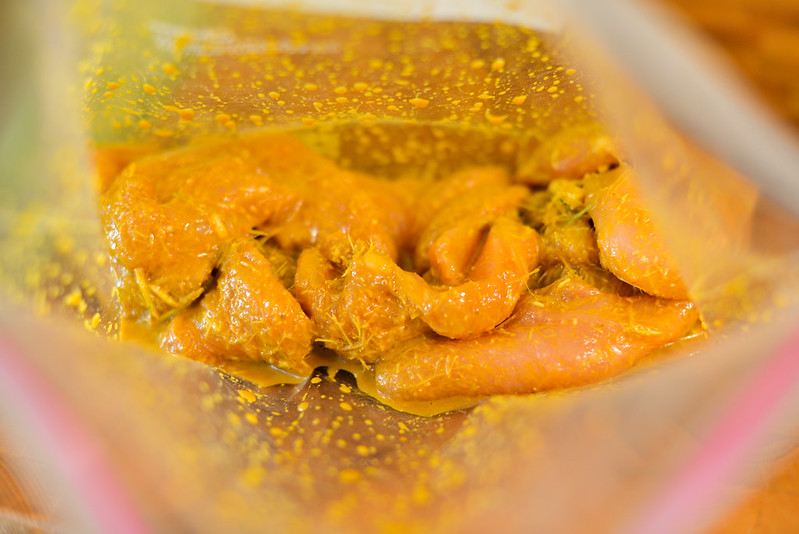 I added this potent mix to thinly sliced chicken breasts and let it marinate in the fridge for an hour. You can see in the photo that I did a bad job peeling my lemongrass, which remained too fibrous even after a long spin in the blender. 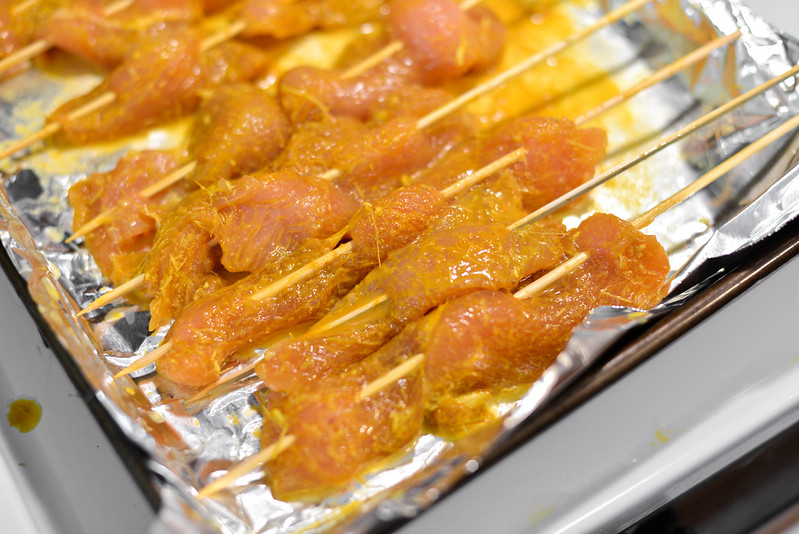 I ended up having to rub a lot of that tough lemongrass off as I was skewering the chicken. Thanks to the staining power of the turmeric, this left my hands looking as if they were suffering from some localized jaundice once the last chicken strip was threaded onto its skewer. 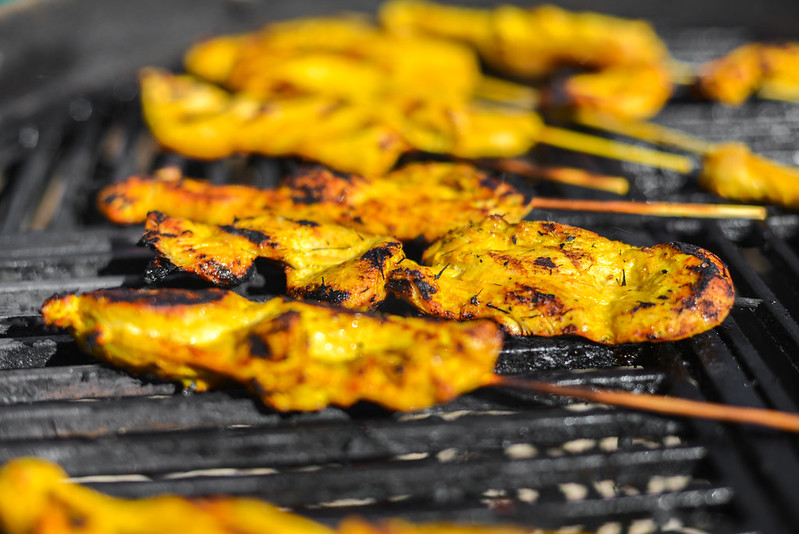 Like with beef satay, I subjected these to some intense heat, hoping to get a nice sear and cook the chicken throughout in little time. I had to be careful though, since I hadn't brined this chicken, there was little room for error in cooking time. They did cook incredibly fast—a mere two to three minutes per side left them some beautiful browned parts with a meat that was just cooked through. 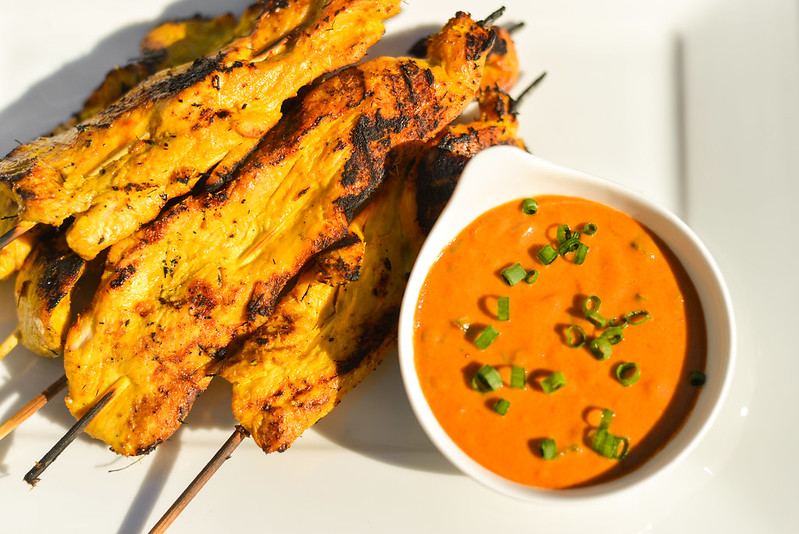 I can't say every piece was perfect—there were the few overly dry skewers in the mix, and if doing them again, I'd opt to brine first—but generally, these were some pretty tasty chicken skewers. The marinade did its job in giving the chicken an earthy, salty, and slightly spicy flavor that certainly didn't leave them the flavorless sticks I thought they would be. Still, they did benefit from the peanut sauce, which added that extra layer of complexity and intensity that I personally am drawn to in my food. Now I wouldn't rush out and make these over beef satay, but I will say that they left me with a slightly better impression of chicken satay, one where I would think twice about knocking it the way I have in the past.