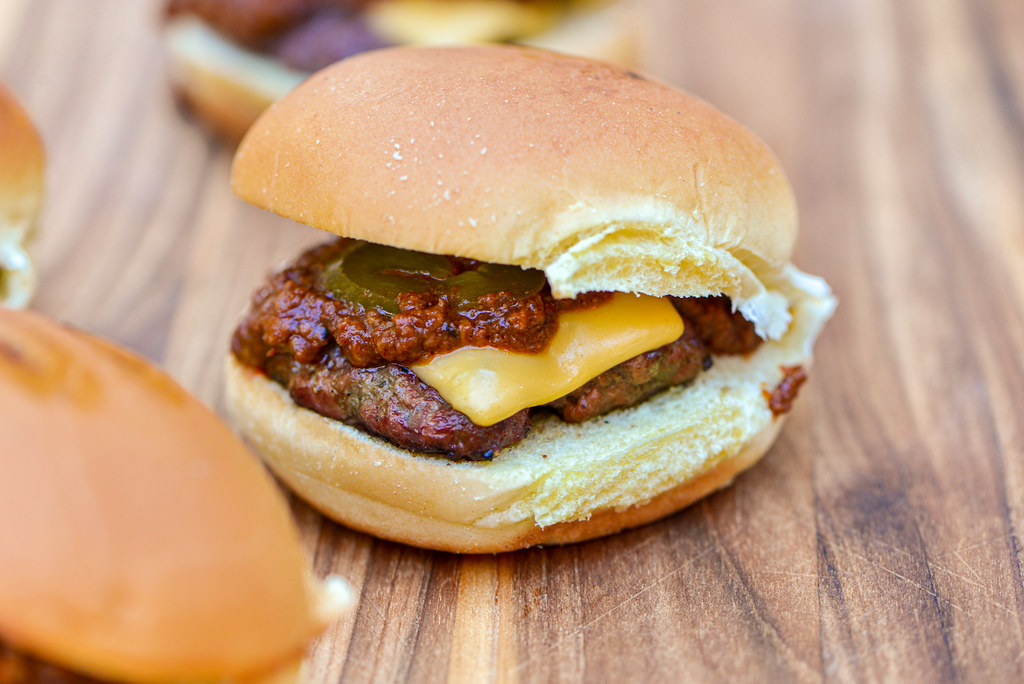 At the last Meatwave of the 2021 season, I decided to revolve the menu around chili as a fitting comfort to go with the crisp fall weather. I had a bag of hot dog-style chili I had made earlier in the year sitting in the freezer waiting for the right use, and this seemed to fit the bill. Since it was used for chili dogs previously, I wanted to change things up and make chili cheeseburgers this time around, but I worried that full-sized burgers were not what anyone would want to eat after helpings of the smoked pork chili verde and brisket tamale pie that were served first. So I decided to keep with my original thought, but just scale down to mini chili cheeseburgers, which was the right call and also made these an excellent party choice, especially for upcoming New Years celebrations where they would make a either a great close out to past year or tasty welcome to the new one, however you want to look at it. 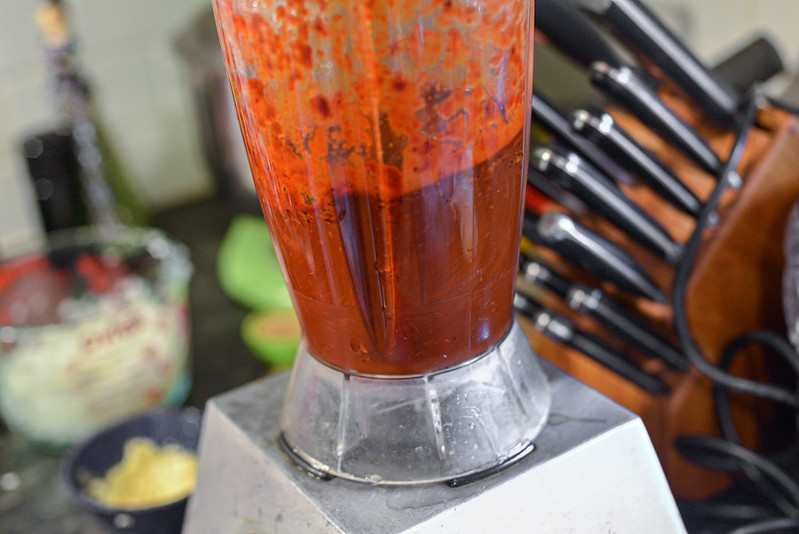 Most of your time investment in this recipe will go into making the chili, but the good news is that you can prep in the days prior and just reheat when it's grilling time. The chili recipe is one that I adapted from J. Kenji Lopez-Alt and have used many times in a past. It's a good thing too because I had to rely on past photos here because the actually batch of chili I used for these burgers was made before I knew it would become part of a recipe for this site, so didn't take photos of the process. The chili began by soaking dried ancho and New Mexican peppers in boiling chicken stock until they were tender, then pureeing everything together in a blender. 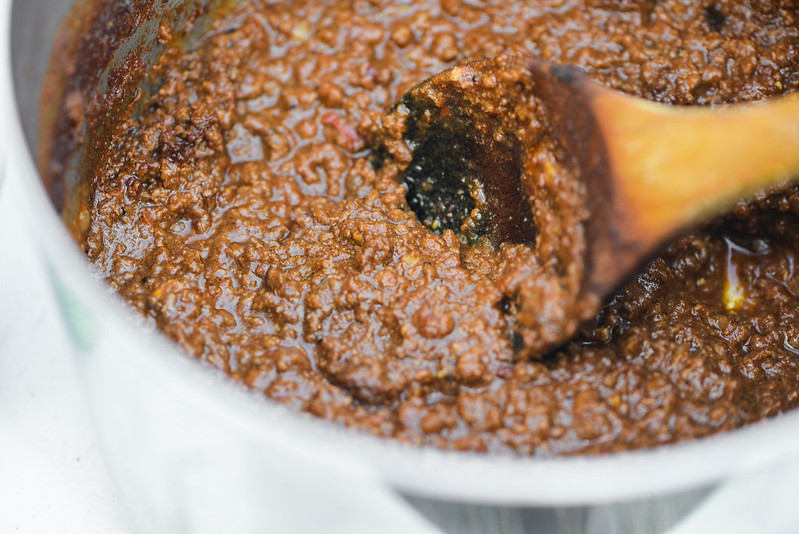 Next, the trick to getting that distinct fine grain from the ground beef is to whisk it into the liquid chili mixture while heating in a pot, which breaks the meat into smaller bits than you would get if it was browned on its own first. Then, like with most chilis, the rest is just a matter of waiting until the sauce reduces and thickens up. Since you don't need all that much chili for these tiny burgers, I actually halved the original recipe, so if you want some leftovers—it does freeze well—go ahead and make a full batch, which is what I would probably do. 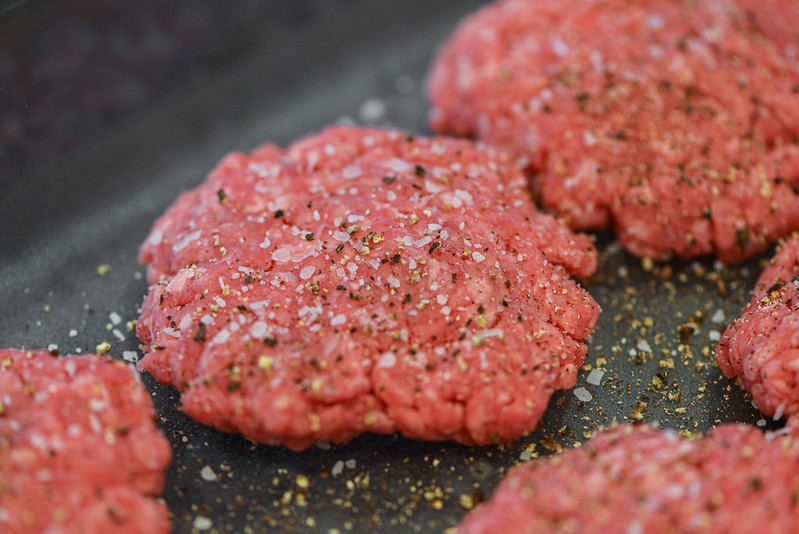 After the chili was done, prepping the patties and grilling is quick work. I recommend going with roughly two ounce portions of ground chuck that has at least 20% fat for juicy burgers that are the right size. I tried to make my beef stretch into more burgers when making these, so used a bit less than my own advice, and while the burgers were still quite tasty, they shrunk up smaller than the buns in the end. 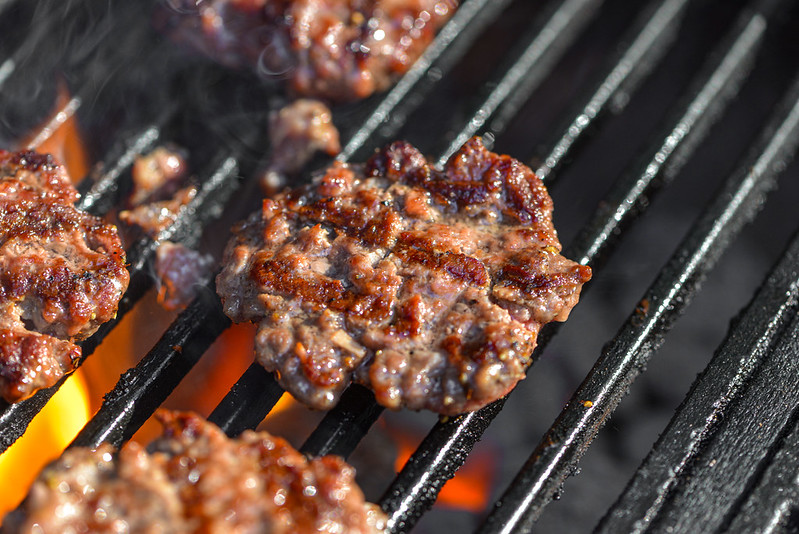 After forming and seasoning the patties with salt and pepper, I placed them over direct heat on two-zone fire and let the first side start to brown before I attempted to flip to ensure it would release from the grates. Then I continued to cook, flipping fairly regularly, which helped form a good sear on the outside without totally overcooking the inside. 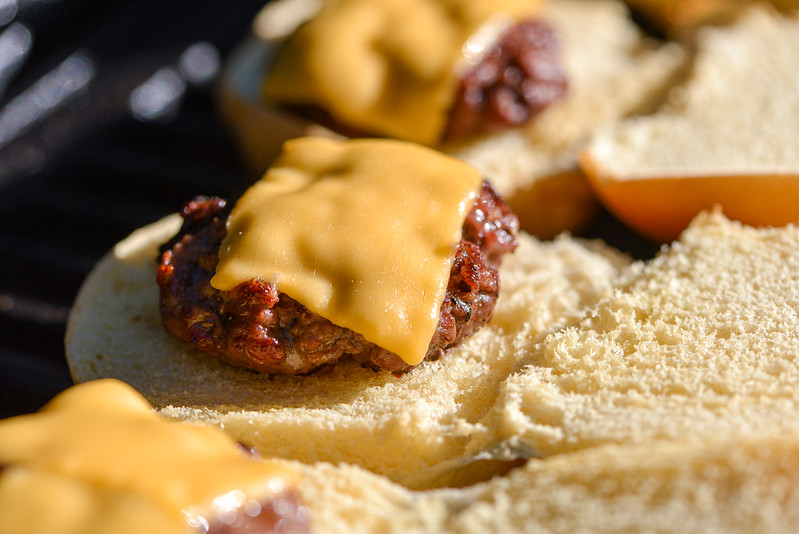 Once done, I transferred the patties to the slider rolls and topped each with American cheese. I placed all of those on the cool side of the grill and covered. Since American cheese melts quite fast, this allowed me to both get a warm bun and melted cheese at the same time. Finally, to finish of the burgers, I topped each with a generous spoonful of the chili and one pickled jalapeño slice each. 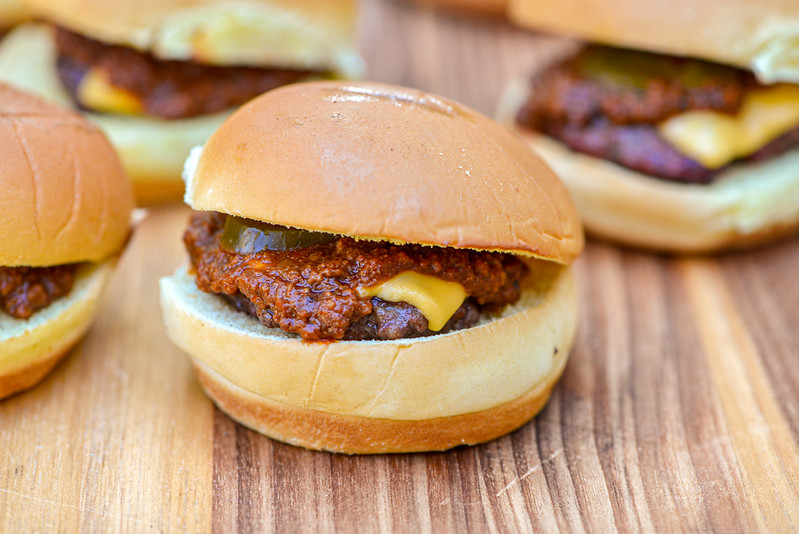 I don't eat many chili cheeseburgers, but from what I have had, I liked how the combo worked in mini-form over full size. The reason being was the smaller amount of beef really let the chili come through first and foremost. That good beefy burger sear that was accounted for, but earthy chili defined the wee sandwiches while the jalapeño did a lot in delivering a touch of heat and mild acidity. The reason I used less beef in each patty to get more burgers was to ensure all of my guests that day could get at least one to try, but some last minute cancellations actually found me with too many tiny chili cheeseburgers on hand, which I didn't mind because I had no problem downing three in one sitting, then a fourth while cleaning up later in the evening when there was still a couple left uneaten and resisting their lure was futile, even with a stuffed stomach. 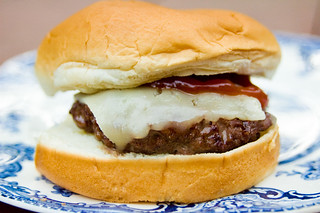 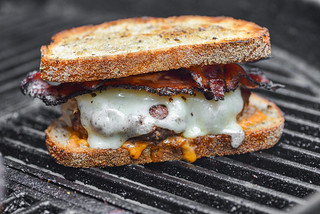