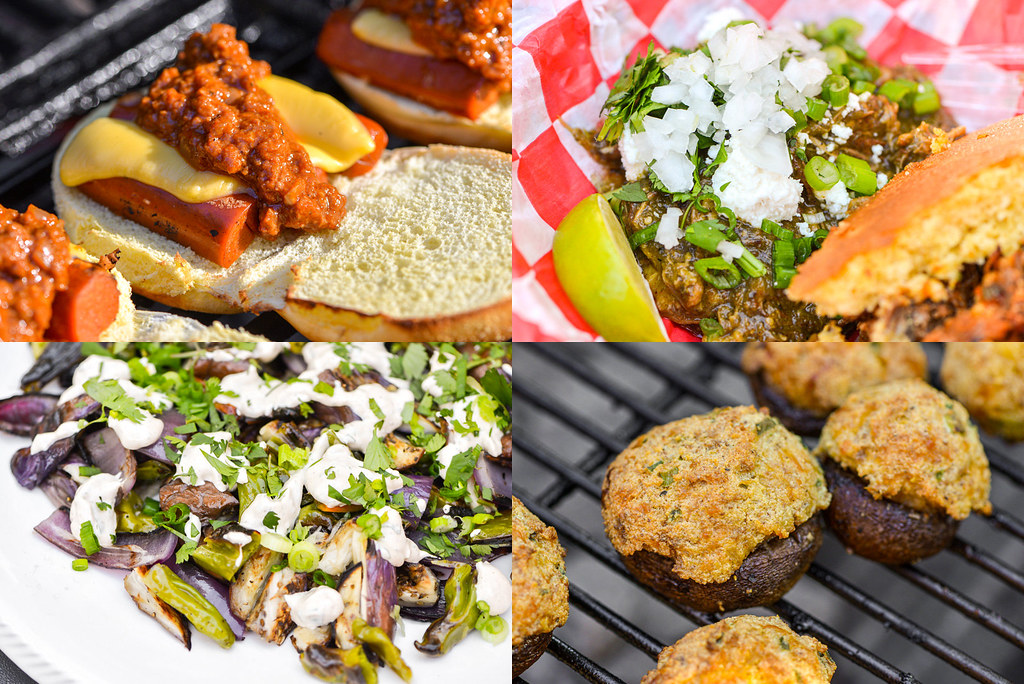 When 2021 got its start, it was looking like we were in for another Meatwave-less year as Covid continued to rage. As things started to look a bit brighter in the spring, I began dipping my toe into having small Meatwave gatherings and that seemed to feel manageable and safe. I still wasn't sure I would get a full season in, but Meat Your Hear Out a couple weeks ago marked the sixth event of the year, which is the number I usually aim for, albeit they all played out in a scaled-back fashion. 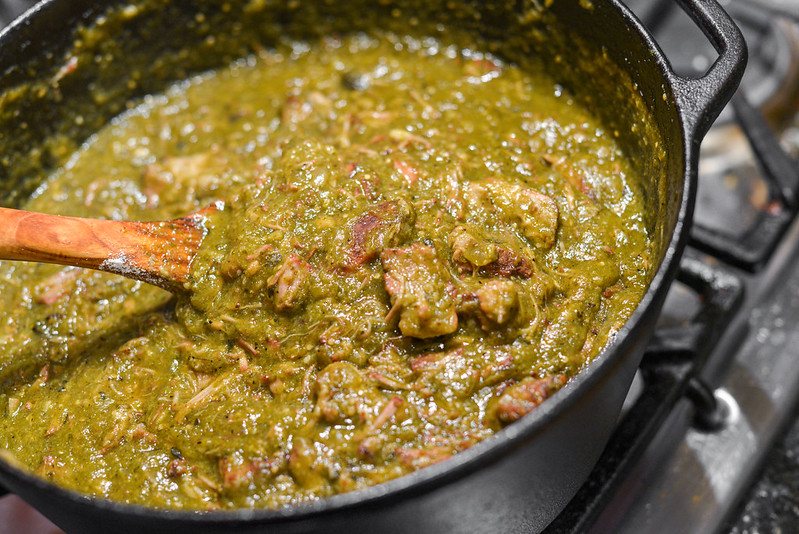 With the crisp fall air settled in, I felt like a series of chili-based dishes would be a good thing to center a menu around. I had considered making a smoked pork chili verde for a camping trip a couple weekends prior to this Meatwave, but didn't then, so acted upon that idea to start off the day with a chili that had a nice kick of heat and a great underlaying smokiness. 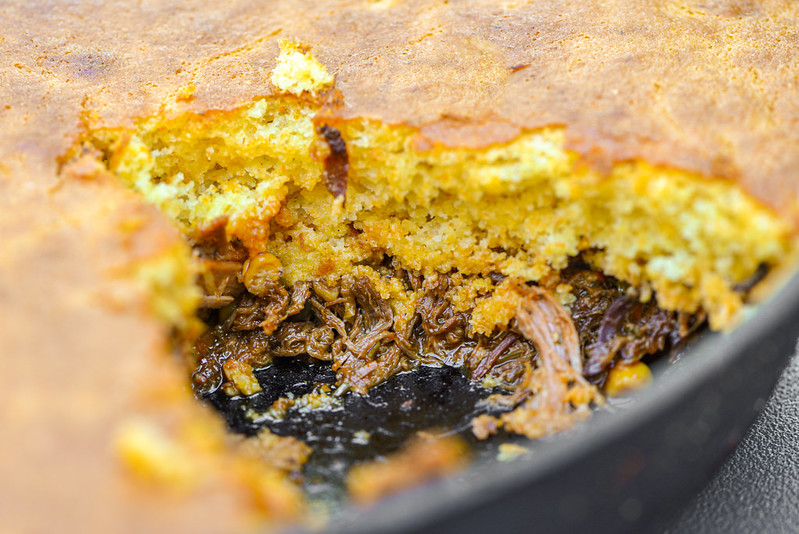 Next up was a smoked brisket tamale pie. This dish really brought the Meatwave season full circle because the brisket was one I had smoked and then froze the leftovers of way back in May. I had two two-pound chunks of smoked beef waiting for the right use and this tamale pie was certainly worthy of it—the smoked meat was well matched with a red chili and series of veggies that got topped with cornbread batter and baked. 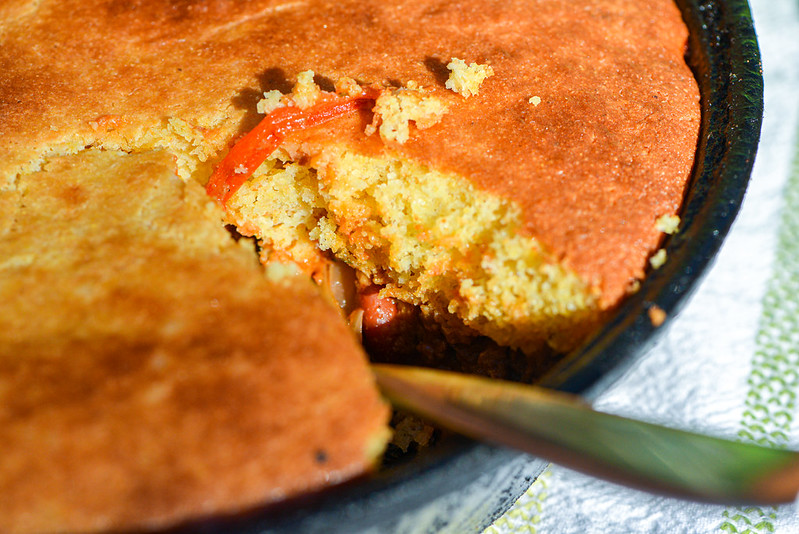 I was really excited for the tamale pie and didn't want the vegetarian constituency to miss out on it, so made a version that subbed out the smoked brisket in favor of Impossible meat and beans. Those two formed a very hearty base that made the meatless version stand alongside the brisket one quite well. 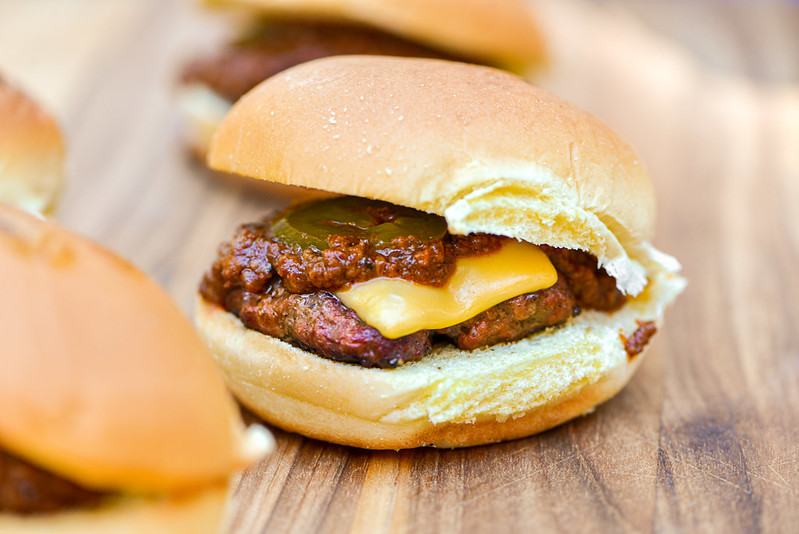 I also had a small bag of hot dog-style chili in the freezer from a non-Meatwave dinner I hosted earlier in the summer. Since I had the chili theme going, it made sense to defrost that and put it to use and I thought chili cheeseburgers would fit the bill. I figured after two substantial chili dishes though, no one would really want an entire burger, so I made these mini, slider-style, with the small beef patties being grilled and then paired up with American cheese, chili, and a jalapeño slice. 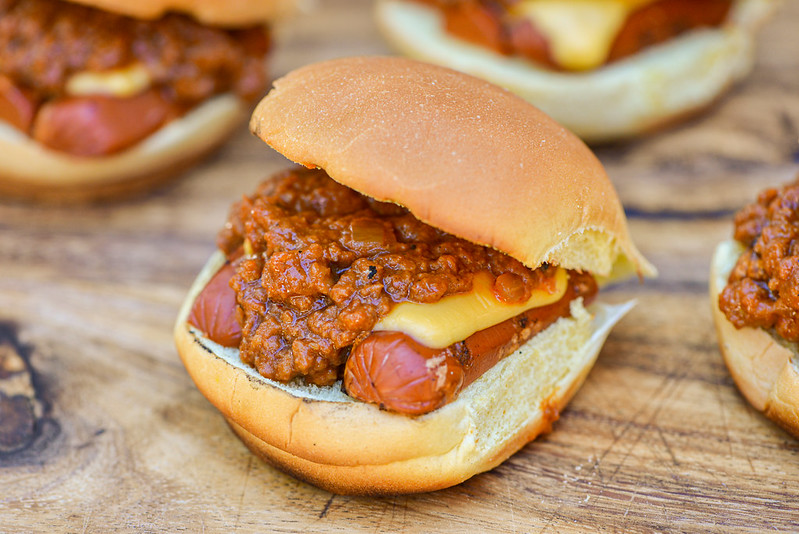 Like with the tamale pie, I wanted a vegetarian version of the chili cheeseburgers, but I went a little different using veggie dogs that I grilled and then split and halved to fit onto the slider buns. They also got topped with a vegetarian chili that was the same one I used for the tamale pie, I just reserved a portion of it prior to adding in the beans and sliced veggies so it would be more akin to a burger topper than pie filling. 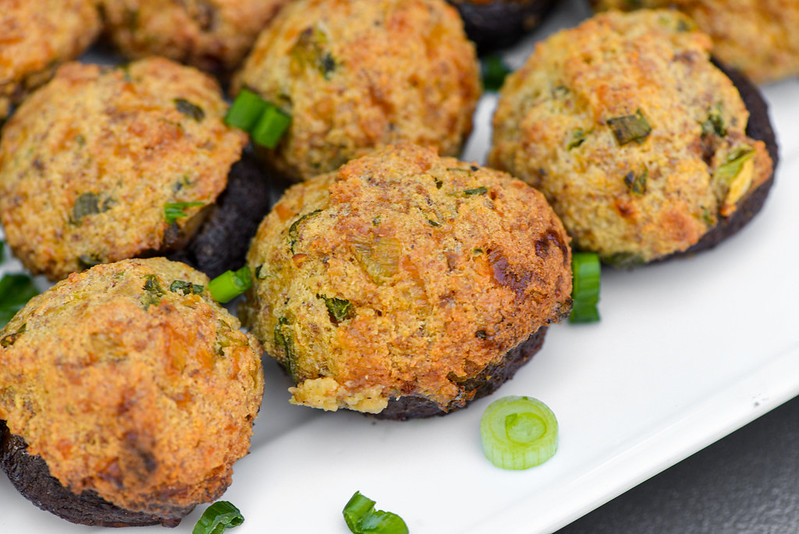 Now onto the sides, which started with another hearty fall offering in the form of these jalapeño cheddar cornbread stuffed mushrooms. I made the filling mixture much like I do my Thanksgiving stuffing with dried out cornbread mixed with half-and-half and egg. Then, instead of the sausage and veggie combo I would normally use, I subbed in jalapeños, onion, cheddar, and scallions. This made for a really flavorful stuffing that went well with the earthy and meaty cremini mushrooms. 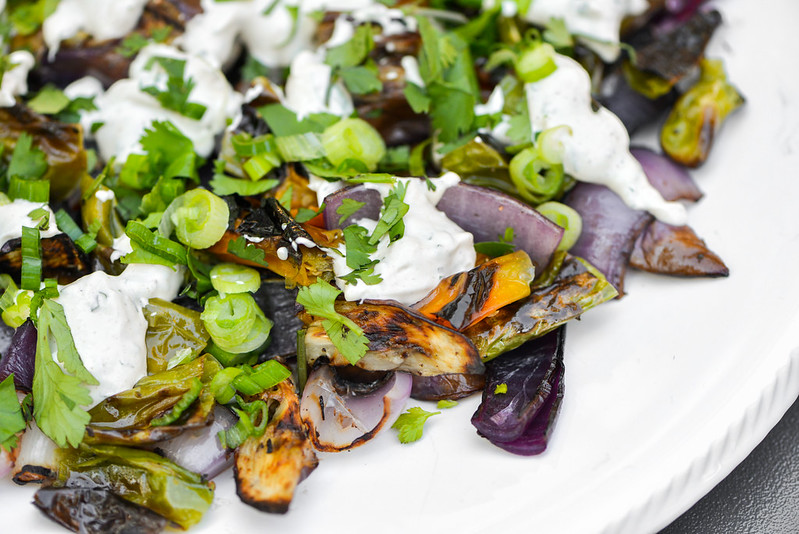 After some last minute cancellations, I considered dropping this last dish of a charred red onion, eggplant, and shishito salad, but I'm glad I didn't because it was the only light-ish spot in and otherwise gut filling meal. And while it was not quite the same as the rest of the dishes, the combo of shishitos paired with lime-crema dressing gave it a tilt that still had it fitting in. 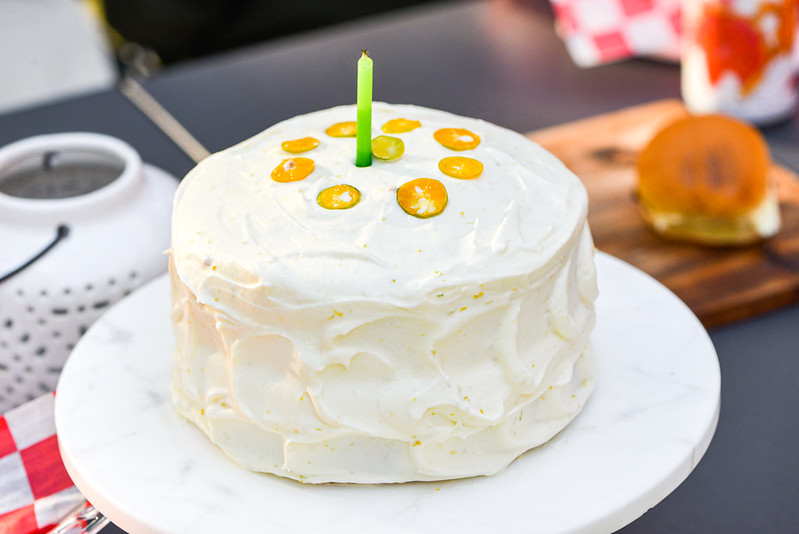 This was also a very special Meatwave because we got to celebrate Kim's birthday! Kris made a calamansi cake to mark the occasion that utilized the remaining fruit from our tree to make a tasty treat. 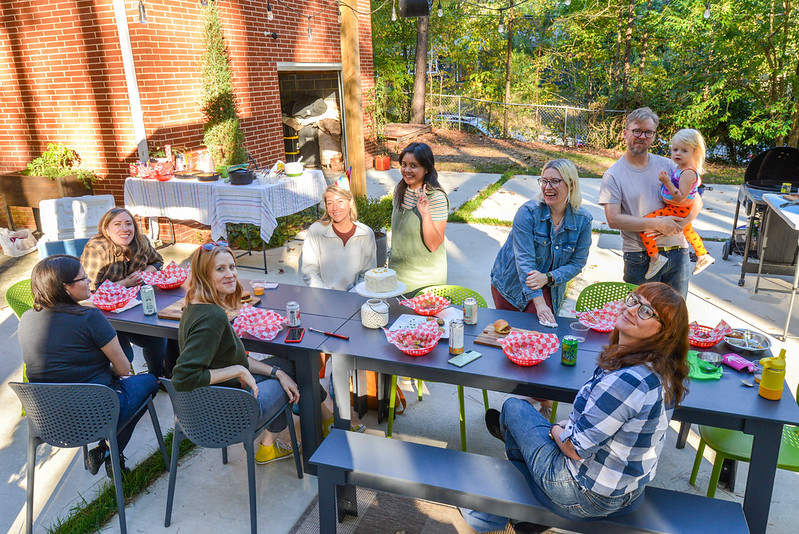 And here's the crew we had on hand which included Alison, Lindsey, Mel, Christina, Kim, Kristin, Leslie, Steve, and Brooks. 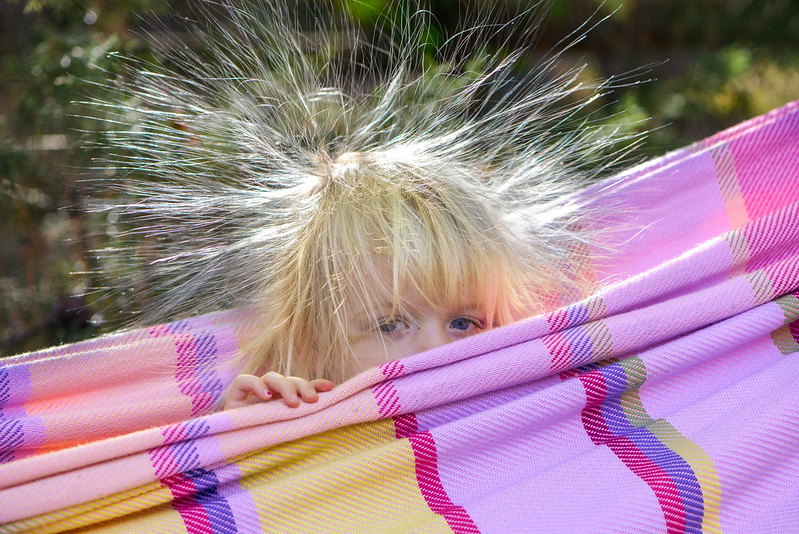 Brooks even got in some hair raising hammock time. 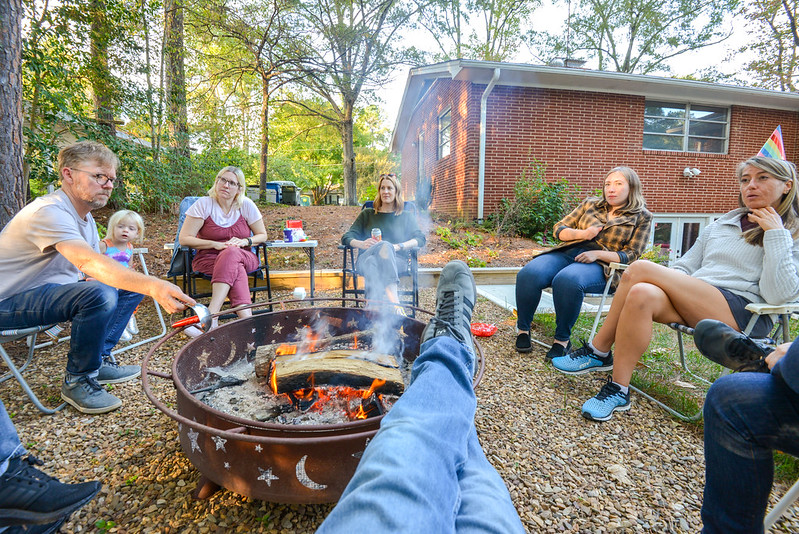 And, as I like to do at fall Meatwaves, we ended the day with a fire and s'mores. I feel very grateful to be able to have put together an entire Meatwave season in 2021 after having to go into hiatus the previous year. Hopefully things just keep getting better and we'll be back in full force in 2022 because I still have so many ideas meant for larger crowds that I've been sitting on for two seasons now.