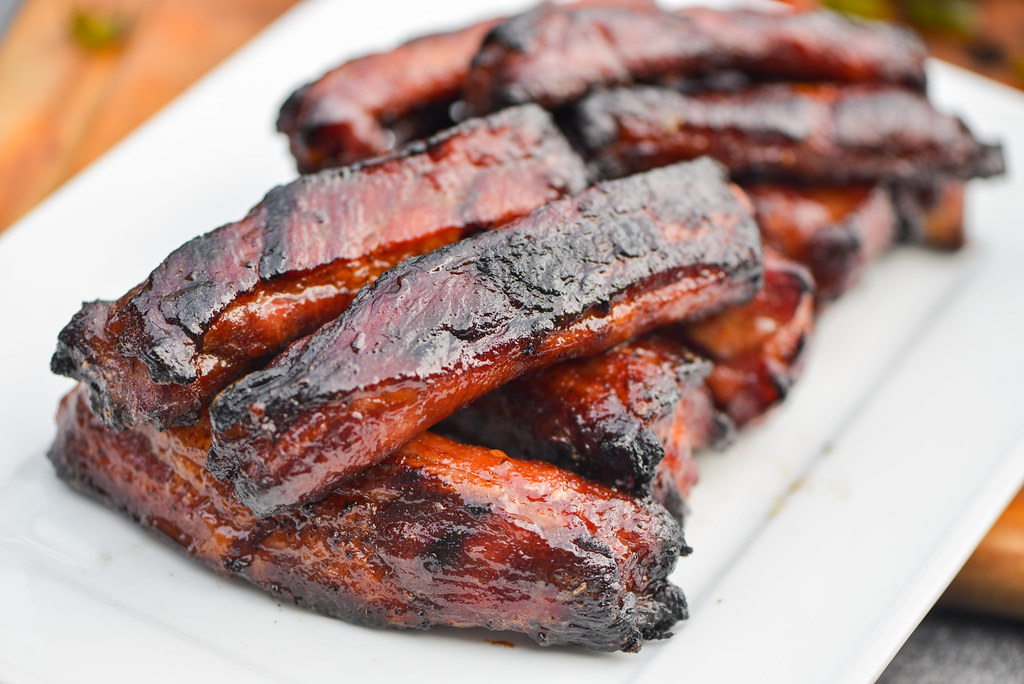 It's very likely my first pork rib was at a Chinese restaurant. Growing up in the suburbs of D.C., barbecue was not prolific, but Chinese restaurants were, and boy did my family love going to them. A dinner out for Chinese meant one thing to me back then—pu pu platter. In a love for all things appetizers, which still persists today, the pu pu platter was like mecca. I got to have it all—beef skewers, fried wontons, egg rolls, and, of course, spare ribs. I became aquatinted with these sweet and sticky, sometimes tough, spare ribs at a young age, and my fondness for them has yet to cease. It only made sense that I learn to cook them myself so I could have great Chinese spare ribs all the time, especially since I'm stuck in the weird bad-Chinese-food vortex for Astoria, Queens, in a city otherwise known for excellent Chinese. 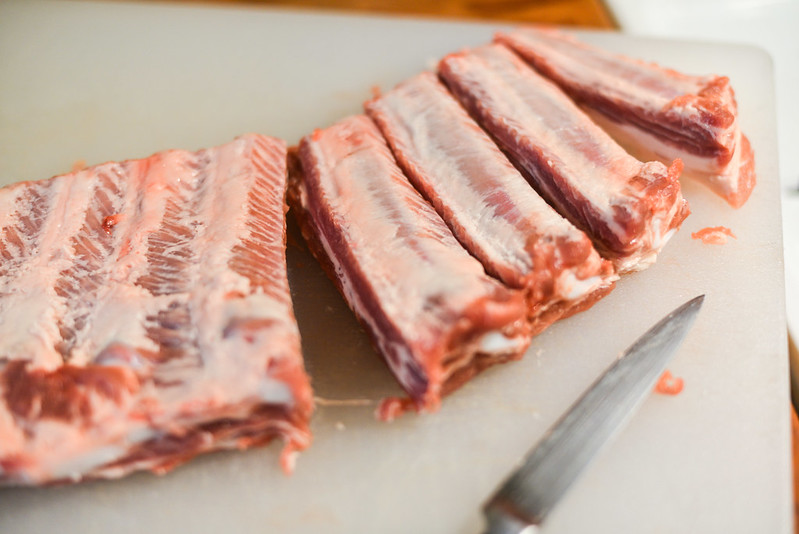 I've actually been working on this recipe for a while. It was one of the earlier things I tried to cook when I started grilling, but ended up with overly tough, dry, and somewhat bland ribs. Over the years though, experience with grilling techniques and building recipes has led me to correct all the wrongs and end up with a killer Chinese ribs—which start as individual bones of a St. Louis cut rack of spares. 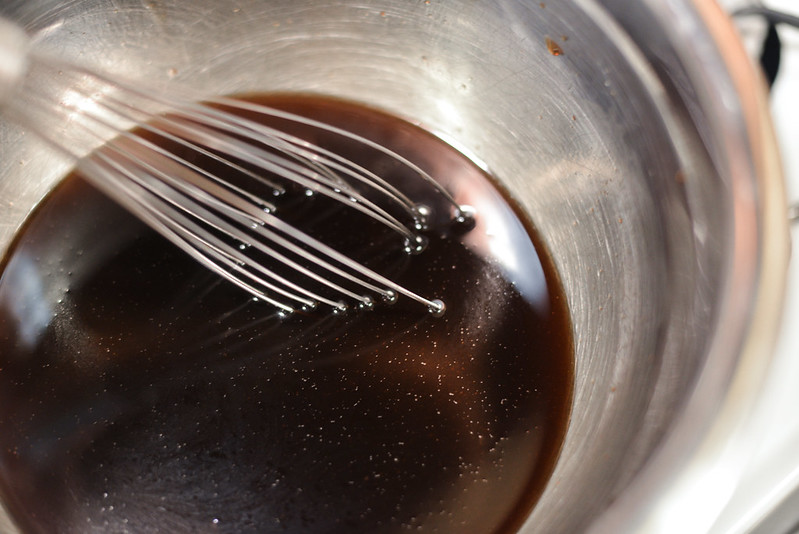 The distinct sweet and earthy flavoring comes from char siu sauce. You can say char siu is kind of the Chinese equivalent of barbecue sauce—it's used extensively in meats that are grilled or roasted. It's a mixture of hoisin, honey, soy sauce, sherry, and five spice powder, which combine to form a sauce that has a robust layered flavor that's sweet, tangy, and earthy, which are all also familiar notes in a standard American barbecue sauce, albeit with a different overall profile. 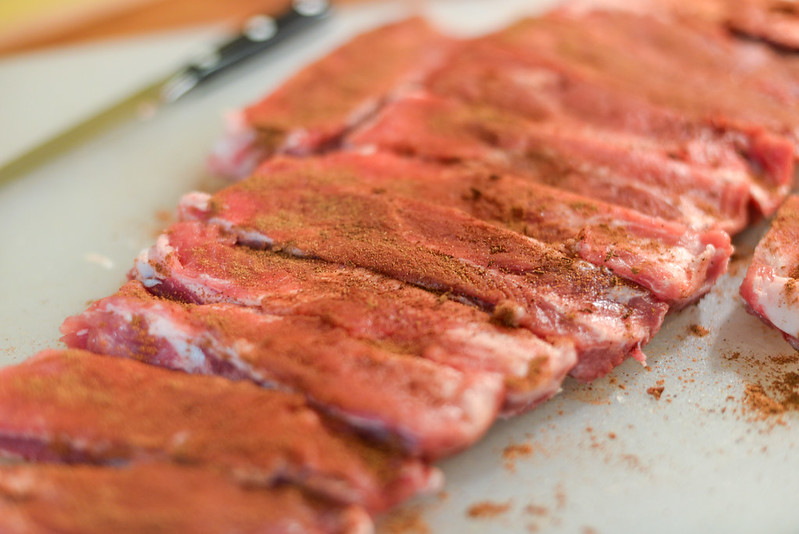 In this latest version of my recipe, I made a change and removed the five spice powder from the sauce itself and instead used it as a rub for the ribs before the introduction of the marinade. I picked this up from Kenji at Serious Eats, and it seemed to make sense since five spice powder is just a mixture of spices like any rub—it's made up of cinnamon, fennel, star anise, cloves, and Sichuan peppercorns. Divorcing the five-spice from the sauce also meant that each rib would get a larger portion of those spices, resulting in a more flavorful rib overall, and I'm all for more flavor. 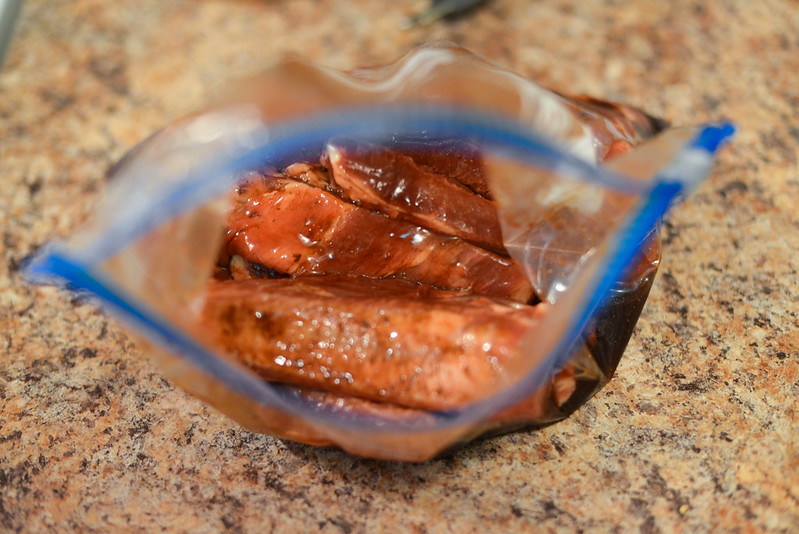 After applying the rub, I tossed the ribs into a Ziploc bag, poured in the char siu sauce, sealed it up, and placed it in the fridge. The longer you let these marinate, the better they'll be. I've gotten great results going overnight to a full day, but you can let them soak up to three days if you want. 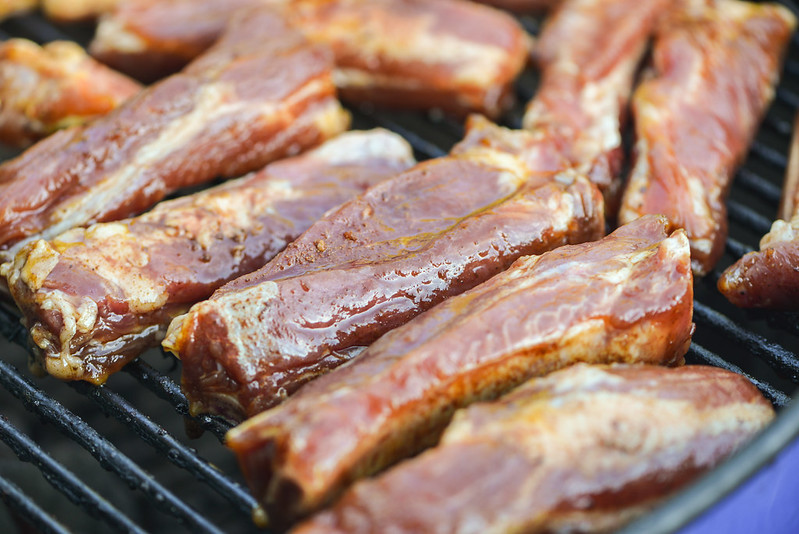 Grilling these ribs goes against a lot of what I learned in making barbecue—you want to go as low and slow as possible with spares. Rather than smoking these at the usual 225°F I would normally, I roasted them over indirect heat at a fire running around 350°F. Conventional wisdom would tell us that cooking them hotter and faster won't allow enough time for the fat and connective tissue to breakdown for maximum tenderness. That's totally right, but Chinese spare ribs are chewier and tougher than barbecue ribs, so it goes with the territory, and that's not a bad thing. 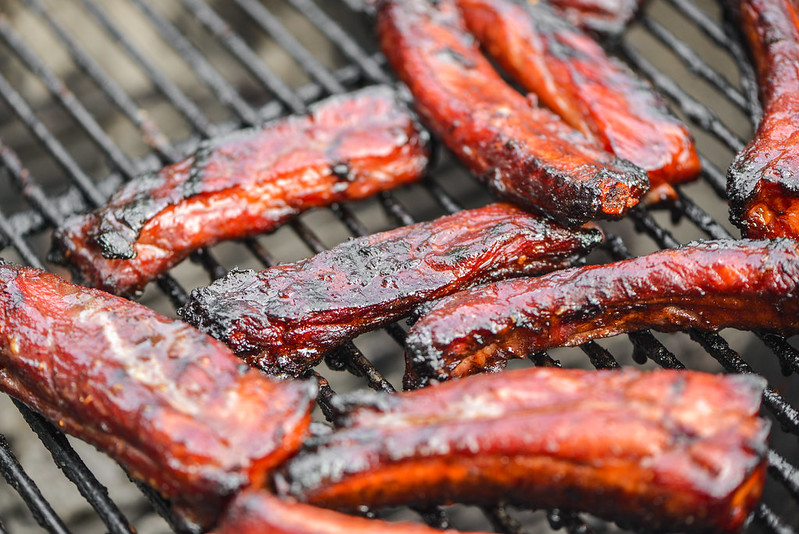 Right out of the bag, the ribs looked a bit pale, but as they cooked, they developed that characteristic earthy red hue. I cooked mine for an hour over indirect heat, brushing them with reserved char siu sauce halfway through. By this time, the ribs were done cooking, but I brushed them with the char siu once again and moved them over direct heat to caramelize the sauce and develop some attractive spotty char. 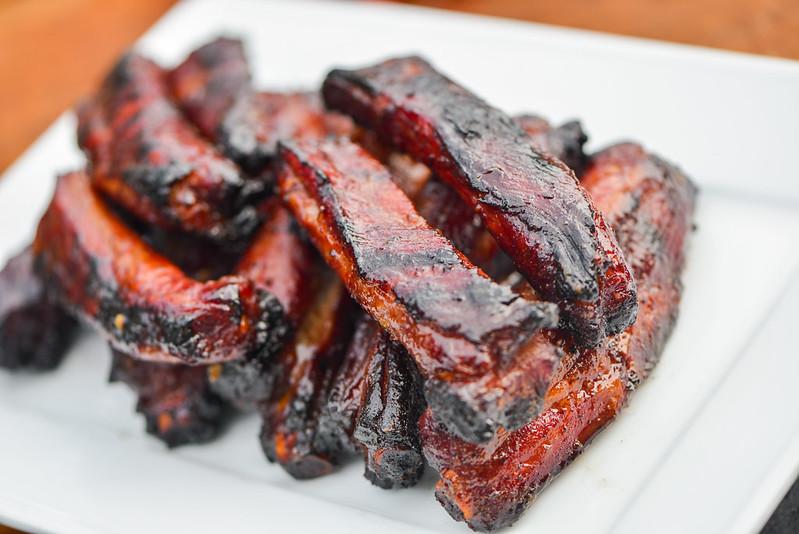 When all was said and done, these were pretty textbook Chinese spare ribs. They had the reddish appearance with bits of char here and there. The meat took a slight effort to pull from the bone, but was totally manageable and wouldn't be considered dry or tough by any means. Most of all though, the ribs had that great sweet char siu flavor, creating an intersection of sweet and savory that works so well and has kept Chinese spare ribs on my list of favorite foods for as long as I can remember.