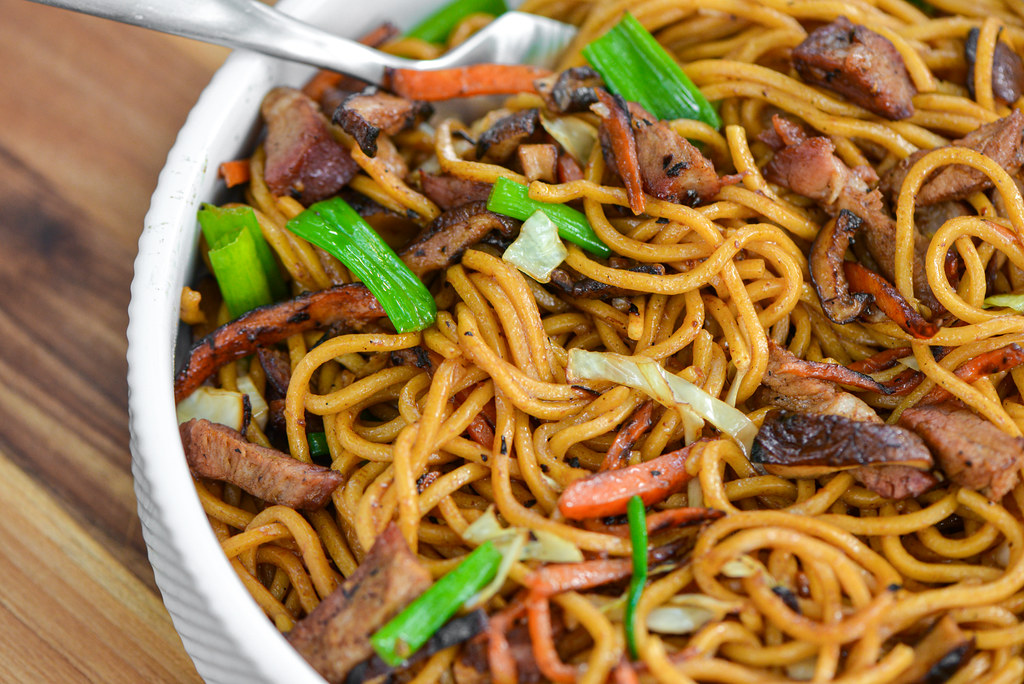 I love the sweet and savory flavor of char siu, which makes sense because it somewhat equates to Chinese barbecue. There's a long list of evidence for my love of it by way of slow smoked char siu pork shoulder, char siu pork belly, char siu chicken buns, char siu ribs, char siu tofu buns, and more. One thing that's missing from that list though is the most common form of char siu—roasted pork shoulder. I had a hankering to make it lately, but I'm not one to leave good enough alone and decided to transform that sweet and glistening roast pork into an almost entirely grilled version of lo mein. 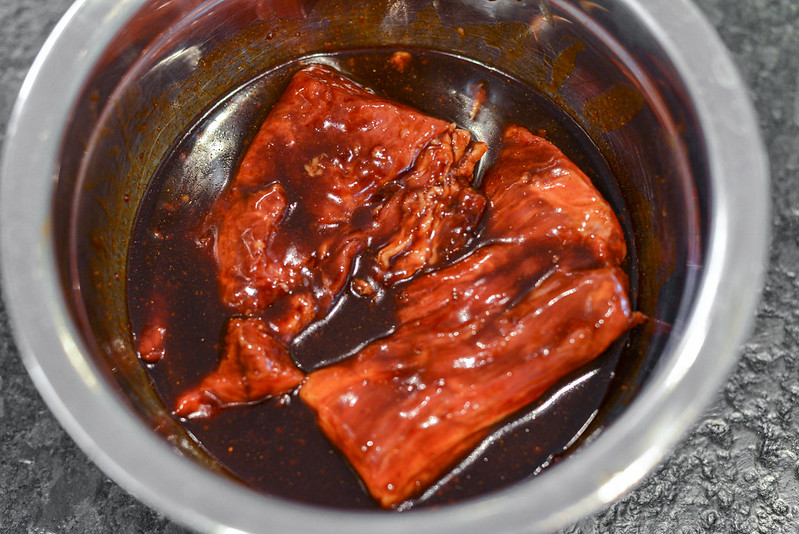 With so many char siu recipes on this blog, you have other posts to turn to for in-depth information on the subject, so I'll keep this part short and sweet. For those not familiar with char siu, it basically boils down to a marinade that leaves whatever it touches with that distinctive reddish hue and a sweet, savory, and mild earthy spiced flavor. Since I have an Asian grocery nearby that I shop at regularly, I don't hold back on using uniquely Chinese ingredients like red fermented bean curd or Shaoxing wine, but some of my older recipes utilized only American supermarket staples and still outputted very tasty results, so feel free to change up the base char siu recipe here if procuring any of the less common ingredients presents a challenge. 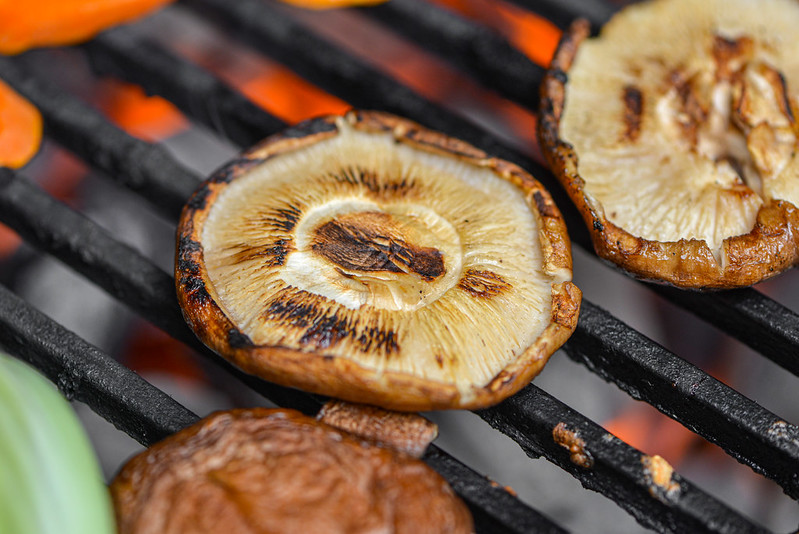 I had let my pork shoulder pieces marinate overnight in the char siu sauce, and then when it was time to grill the next day, I prepped the vegetable components of the lo mein right beforehand, all which I ended up grilling except one. First up were shiitake mushrooms that I brushed cleaned and removed the stems from. I then grilled them until they picked up some charring and became tender, which took about five minutes total. 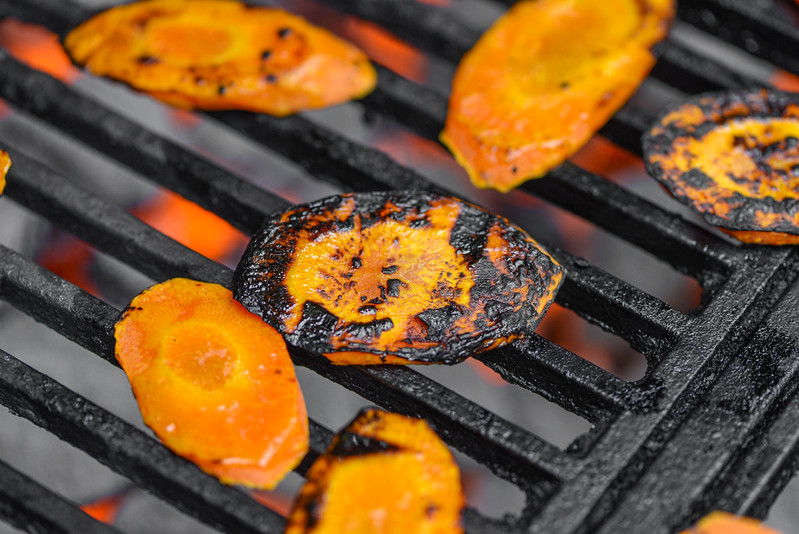 Next we have the carrots, which I cut on a bias after peeling to create slices I hoped wouldn't fall between the grates. I still ended up losing a few pieces to the fire, but the ones that stayed put picked up a fair amount of browning and remained crisp-tender. Like the mushrooms, these also clocked in at about five minutes of cooking time over direct high heat. 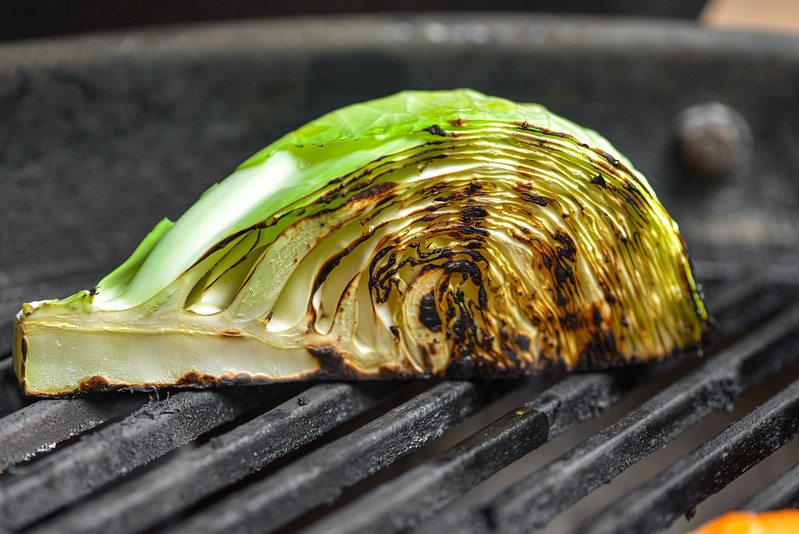 Lastly was the cabbage. I used roughly 1/3 of a small head of cabbage here and kept the core in tact in order to make grilling a snap. To cook it, I just placed it over the direct heat and grilled, flipping occasionally, until it was well charred around the edges. This took about twice as long as the carrots and mushrooms, but when done, the cabbage still had a good crispness in its center while the outer portions were nicely softened. 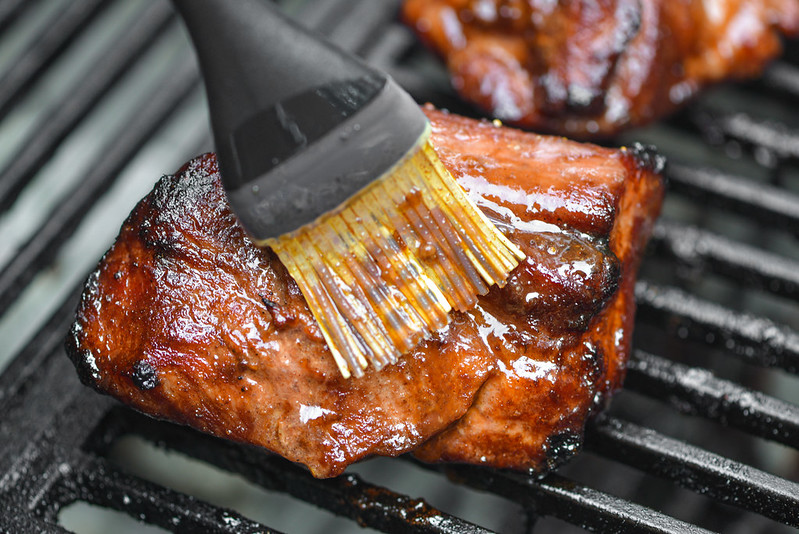 After clearing all the veggies from the grill, I placed the pieces of pork shoulder on the cool side and covered. I let the pork cook four about 20 minutes before I began to brush it with reserved marinade, and I continued to do that about every seven minutes until the meat was done. 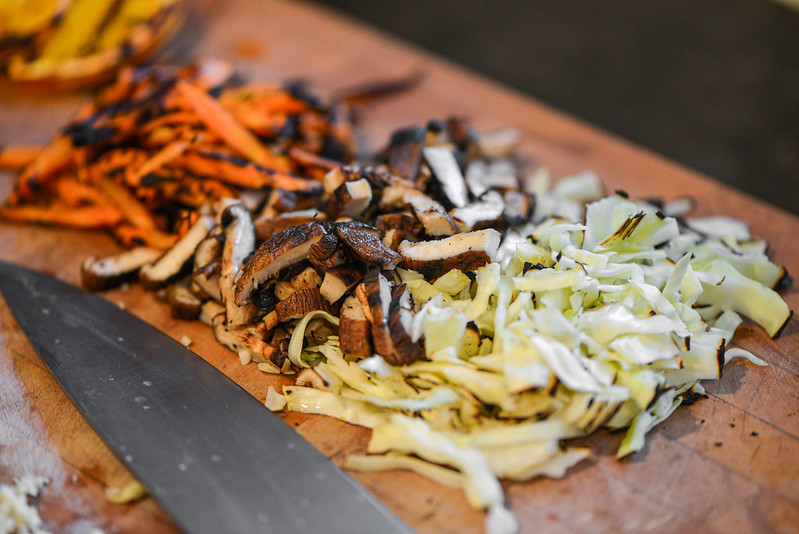 I took advantage of some of the down time during the pork cooking process to get the veggies ready for the final dish—I removed the core from the cabbage and then cut everything into similar-sized thin strips about an inch long. 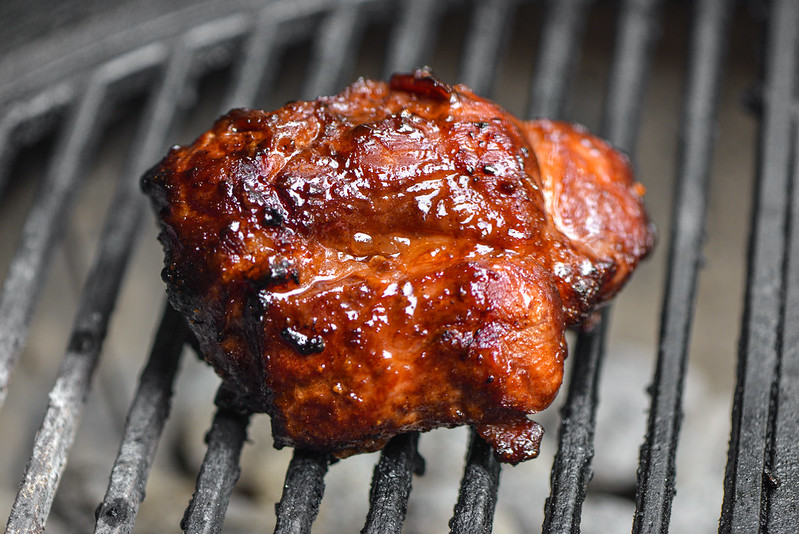 I was shooting for and internal temperature between 155-165°F in the center of the pork, which it hit after roughly 40 minutes of roasting. By that time, the pork had picked up that glistening glazed look of char siu and I couldn't wait to get the lo mein together and eat! 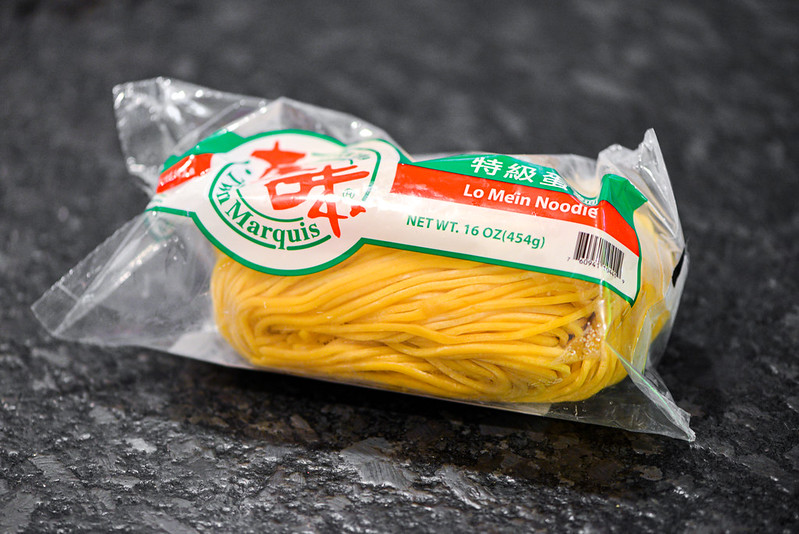 Luckily putting the rest of the dish together was pretty quick. I forgot to get a photo of the noodles cooking, but these fresh lo mein noodles only required three minutes of boiling time until they were tender, but not too soft or gummy. 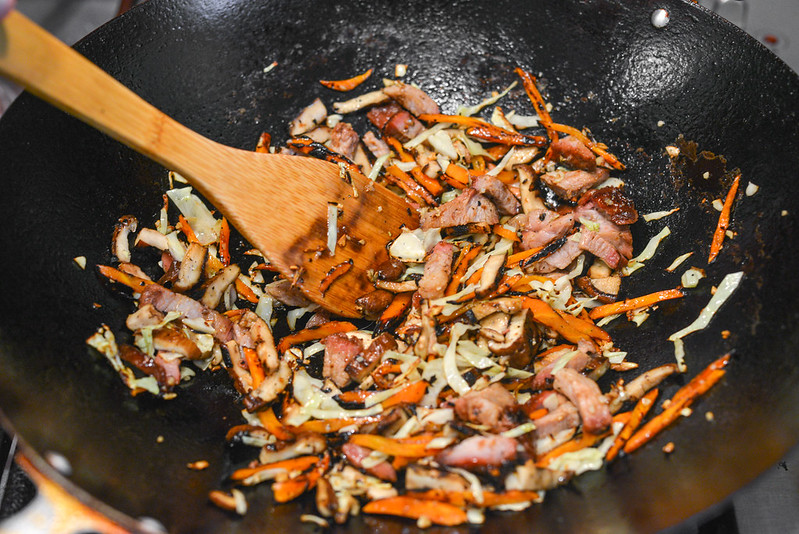 Once the noodles were done and drained, I moved on to the wok portion of this recipe, where I heated up some oil together with garlic until the oil was hot and the garlic fragrant. I then tossed in the veggies and pork and sautéed for a minute mainly just to rewarm them all. 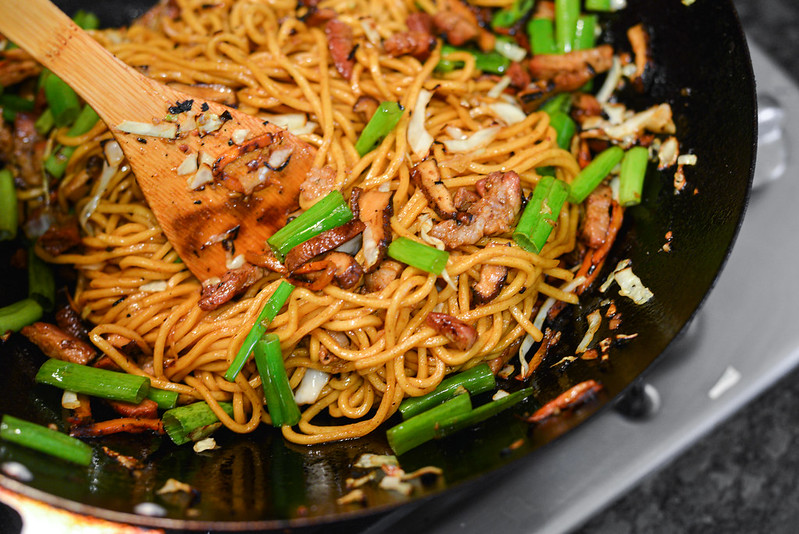 Then in went the noodles, some scallion pieces, and the seasoning which was comprised of light soy sauce, dark soy sauce, Shaoxing wine, and sesame oil. Again, I really only needed to heat everything and make sure the ingredients were evenly distributed since all the components were already cooked. 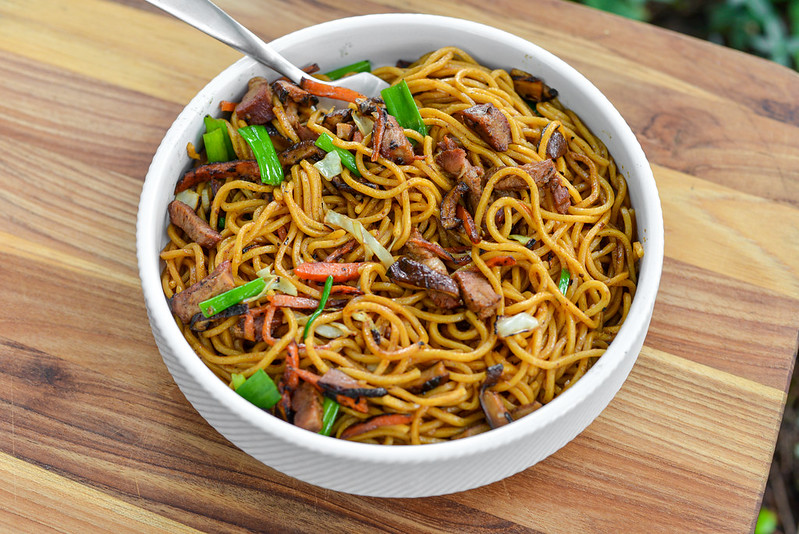 The final plate of lo mein looked pretty on point and taking the time to photograph it was difficult because I just wanted to dig in right away. I worried the grilled aspect wouldn't be very prevalent and would come off as gimmicky, but my wife's first question was why everything was charred, so the flavor and appearance from grilling each component certainly came through. The veggies added that lightly charred flavor while also lending a crisp bite against the tender noodles and pork, which were the highlights for me. The pork especially, with its satisfying earthy sweetness delivered against juicy meat, which made this dish yet another positive char siu addition to this site, albeit delivered in a much different manner than any previous recipe so far and in format that you probably wouldn't normally consider the grill for. 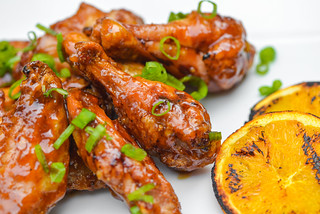