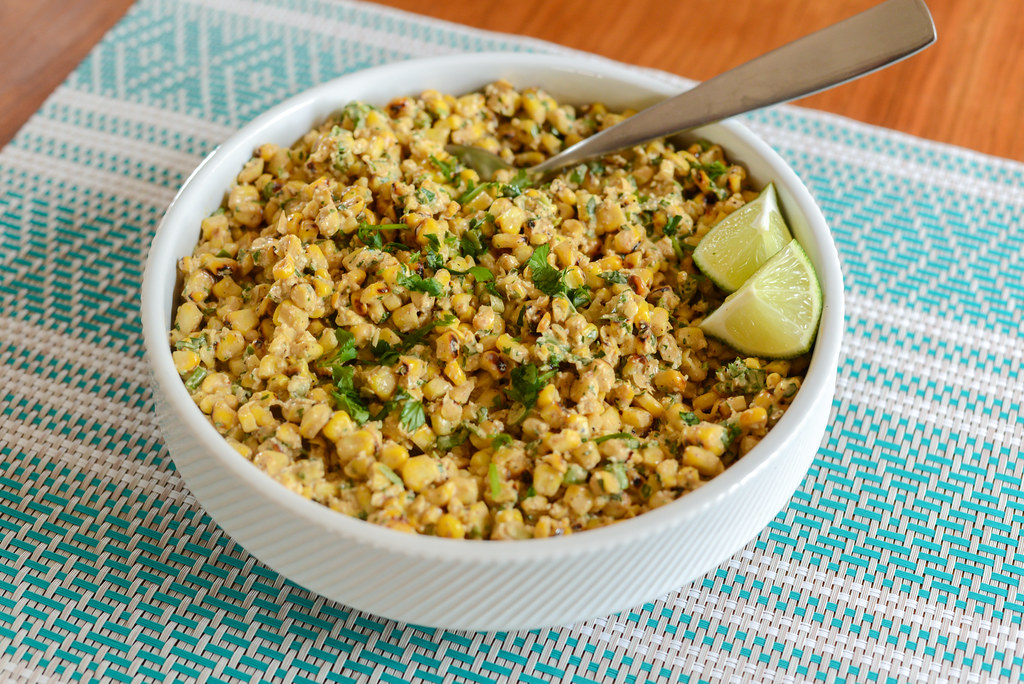 Back in my early days in New York, a good friend of mine had a place across from Cafe Habana on Elizabeth and no trip to see her was ever complete without stopping by the take-out window for some elote either pre- or post-visit. This Mexican corn—slathered in spicy mayo, rolled in cotija cheese, and served with a slice of lime—became so ingrained as part of my diet by the time I took up grilling, it was among the first sides I ever tried cooking myself. Since then, it has continued to be my go-to for many cookouts, Mexican-themed or not, but while this satisfies a craving, it also means no new fodder for recipes to share. Then I realized there's a way to have my elote and still blog about it too—make it in salad form (otherwise known as esquites)! 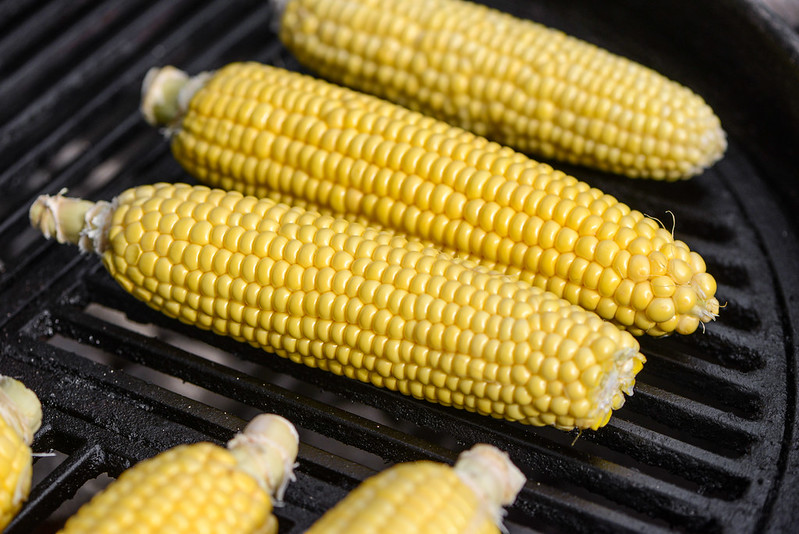 While in essence, this recipe could be almost identical to the one I have for elote, I did do a few things differently, starting off with how I grilled the corn. I'm usually a fan of husking, buttering, seasoning, and wrapping the corn in foil before grilling. This is due do the extra richness provided by cooking in butter plus the foil's ability to allow the corn to char, but not too much. For the equites though, I really wanted to focus on that grilled corn flavor, so opted to cook them unwrapped and unbuttered or seasoned. 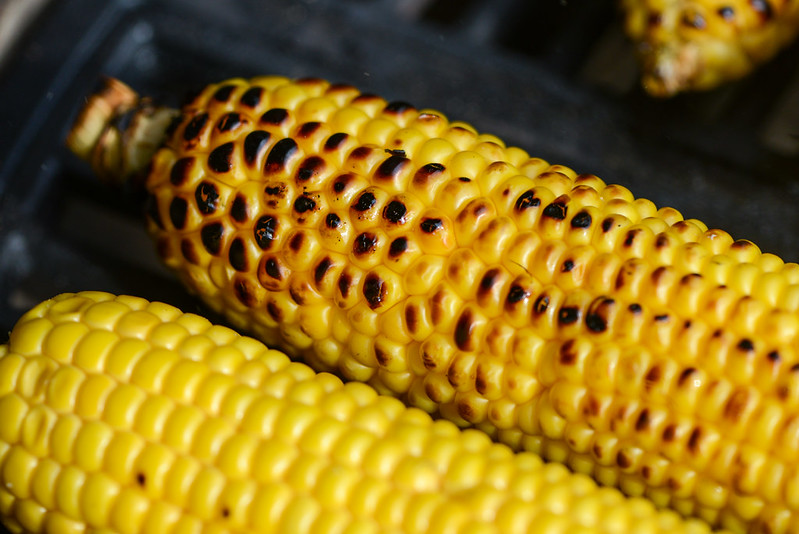 There ended up being two really good benefits of grilling the corn this way—it cooked a lot faster and developed a whole lot more charring. I usually roast corn for about twenty minutes, but cooked naked over fresh coals, the corn was done just over ten minutes, which was nice because the fire was still plenty hot to keep grilling other things afterward. 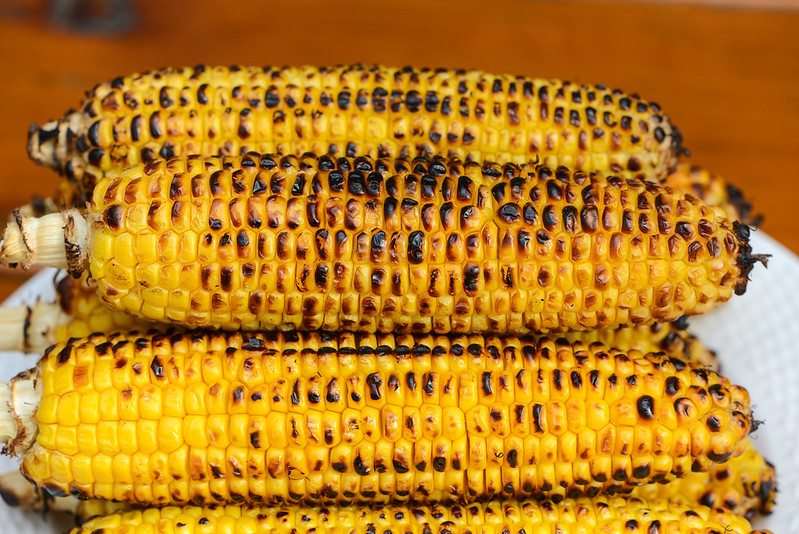 I was serving this for a crowd, so doubled my based recipe and grilled eight ears, which after done and left to rest until cool enough to handle, created one impressive tower of charred corn. 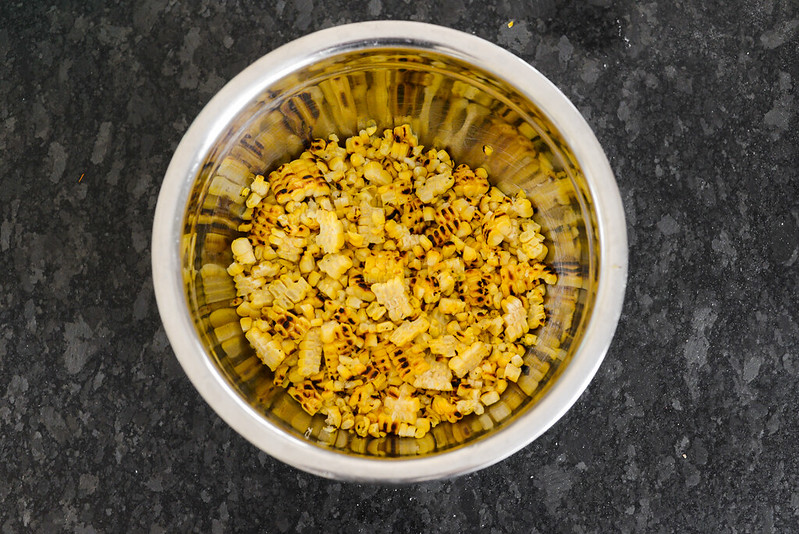 Elote's powerhouse flavor is the main reason I choose to make it so often, but the convenience is also certainly a selling point—once grilled, it's just a spread of mayo, roll in cheese, and done. Esquites introduced the requirement to now cut the kernels from the cob, which admittedly isn't that hard or time consuming, but just presented an added step that changed the value proposition—esquites became more about having something done before guests arrived rather than overall simplicity. 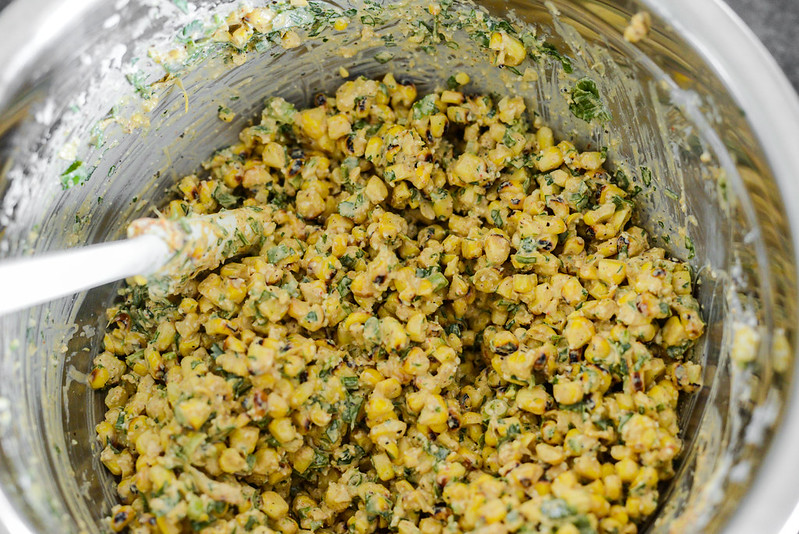 After cutting off the kernels, it was time to build up that great elote flavor. I did deviate from my norms here, seeing the salad as an opportunity add little bit more complexity. Instead of mayo alone, I did a mix of mayo and sour cream to add a bit of tang to the party. Then rather than just cayenne, which brings the distinctive background heat, I also introduced ancho chili powder for a little smoky and earthy chili flavor. And while I often finish my elote with a sprinkling of cilantro mainly for color, I went in heavier here with that herb along with finely chopped green onions for more overall freshness. When all of these ingredients came together, I was left with a salad that was reminiscent of my beloved elote, but was really something pretty unique. 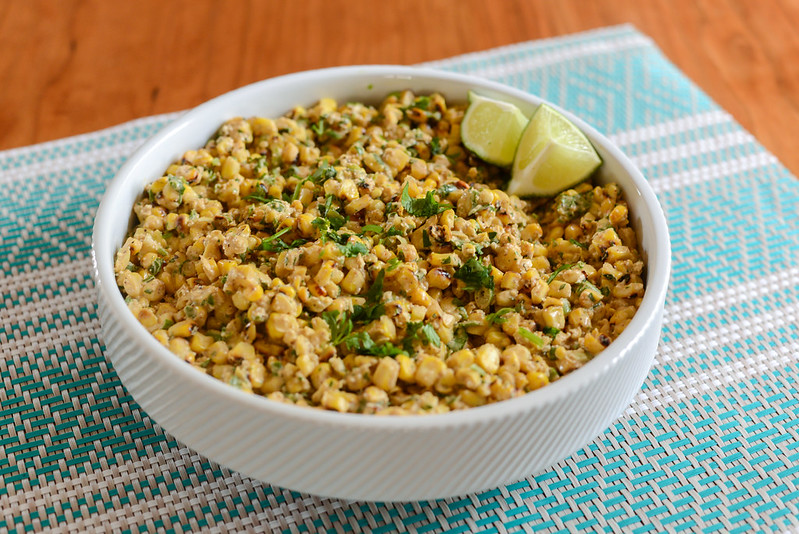 Present was the pleasing intermix of sweet corn, creamy sauce, spicy cayenne, and salty cotija that defines elote, but both the additional ingredients and how everything was put together offered a different experience. The sweet burst of juice from biting into hot corn is part of the elote equation, but with the kernels divorced from the cob and already cooled, that didn't come into play so much here, which actually let the flavors of chili and tangy sour cream be brought more into the forefront. That loss of freshness of eating the corn right off the grill was counteracted by the additional amount of cilantro and scallions. Those really helped keep the salad tasting great all throughout the afternoon, but a little squeeze of lime juice right before eating did a lot to brightened things up. So I set forth with this esquites recipe as merely a way to both have elote and create new content too, but I ended with something that's way more than a simple rehash and a recipe all you Meatwavers really need to try.