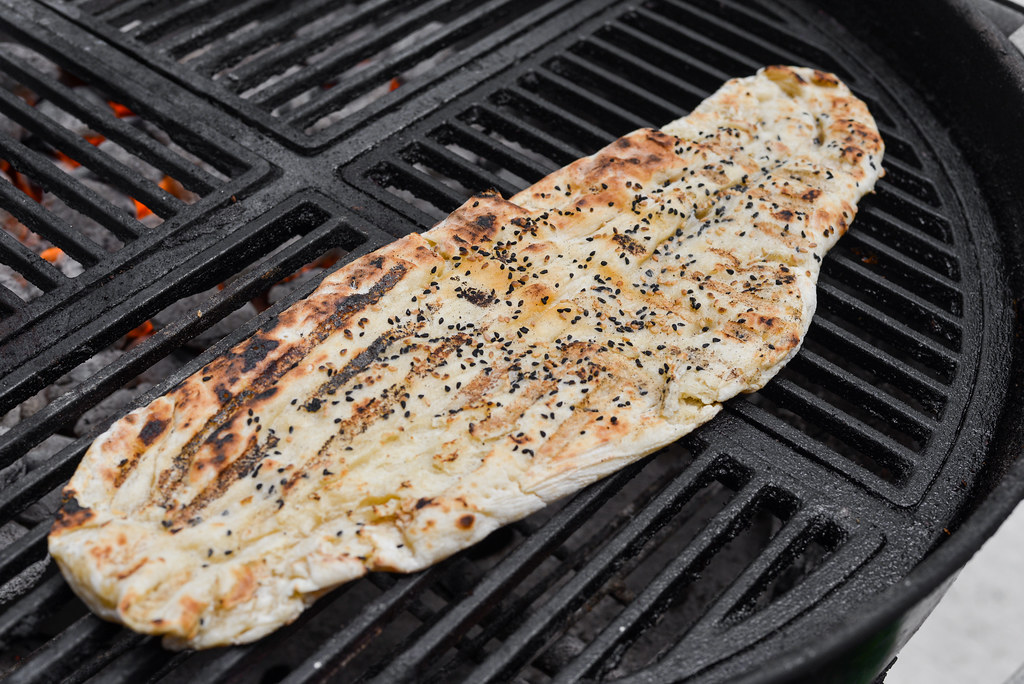 I'm all in on any meal that calls for making fresh grilled bread. When my wife suggested doing some kebabs for a dinner during the early spring months, I began searching for something I haven't tried before and landed on chapli kebab. Those heavily seasoned meat patties have unique variations in Afghanistan and Pakistan and I opted to go for the former version mainly because I also wanted to try making naan-e-afghani too. I'm only casually familiar with this variety of naan, having had it at a few Afghani restaurants here and there throughout my life, but in terms of cooking process, it's pretty much the same as Indian naan—baked on the wall of a very high heat oven. I had good success at adapting Indian naan for the grill, so I thought the Afghan version was going to a cake walk. That didn't prove to be the case, but despite some folly and more learning to do, the bread itself was excellent and felt worthy of sharing. 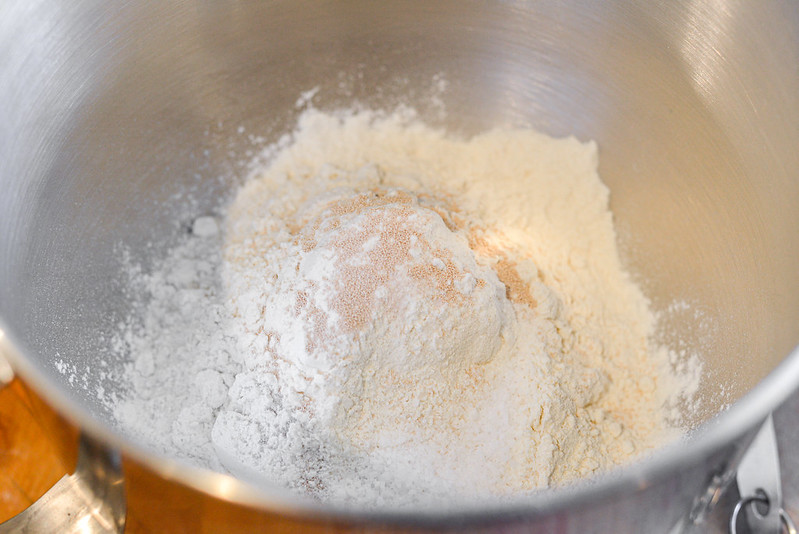 Indian naan is going to serve as my reference point here only because it's the most similar thing that I have experience making. So if you compare these two different regional naans, the base recipe is very similar, except the Afghani version omits any dairy and uses water and a little oil for the liquids. 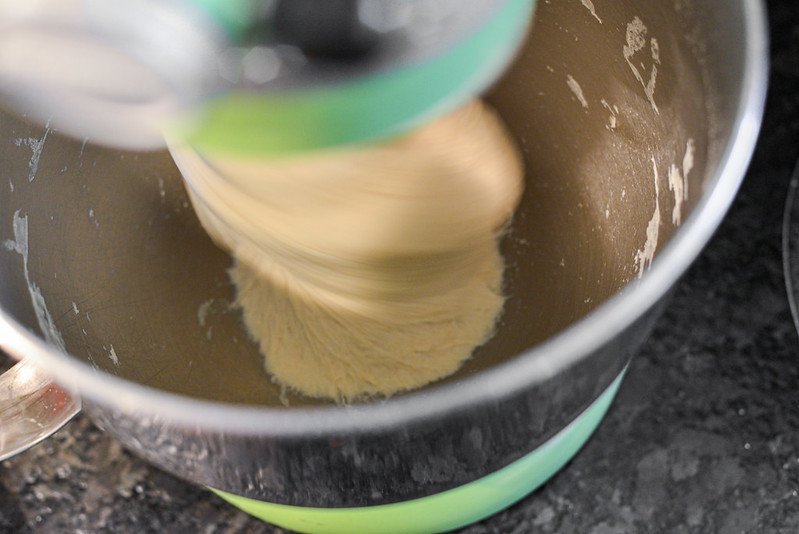 To make easy work of kneading, I utilized my KitchenAid with the dough hook attached to first combine the ingredients at low speed, then knead the dough at medium speed. I let it run for five minutes, and at the end of that time, the dough was sticking to the bottom of the bowl as the hook whipped the mass around, doing all that gluten development work with no physical investment by me. 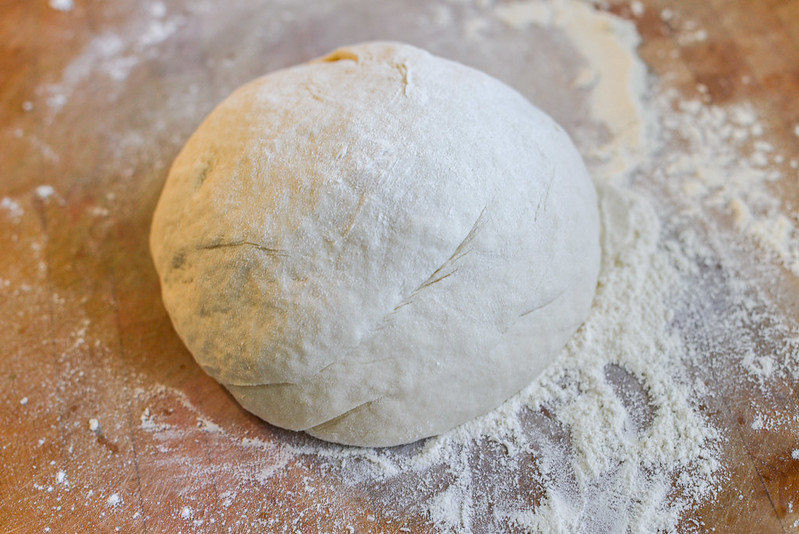 Once it was done, I did turn the dough out onto a lightly floured cutting board and kneaded by hand until I got a smooth ball. I then place the dough back in the bowl, covered, and let it rise at room temperature. 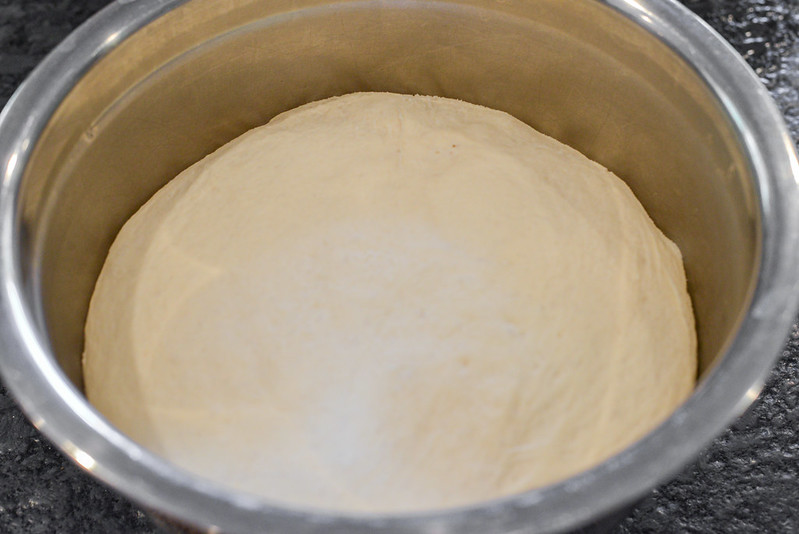 I was looking for roughly a doubling in volume, and after two hours of rising, I was probably a tad over that point. Another change between the Indian naan I've made and this recipe is the absence of a second rise, so at this point I went outside and got the grill prepped for cooking. 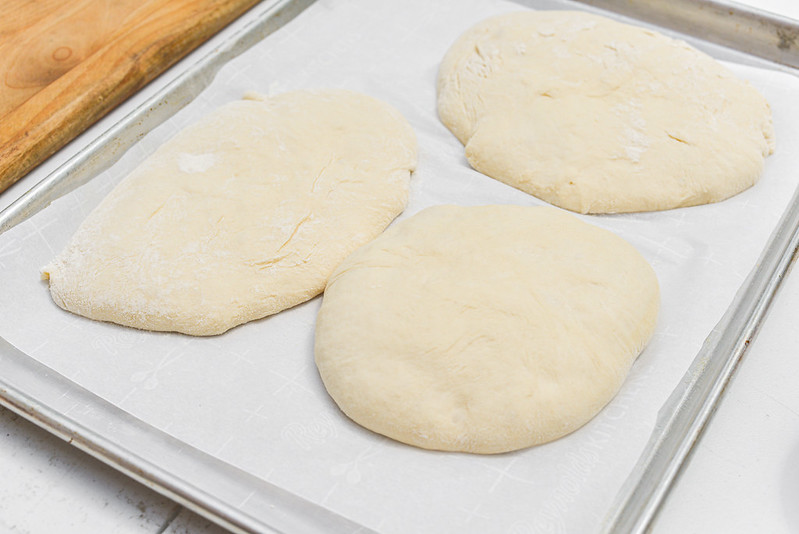 The most visible difference between Indian and Afghani naans comes next with the process of shaping and dressing. From my experience, Afghan naan is made in larger portions, so I divided this batch of dough into only three pieces that I pressed down into a rough oval. 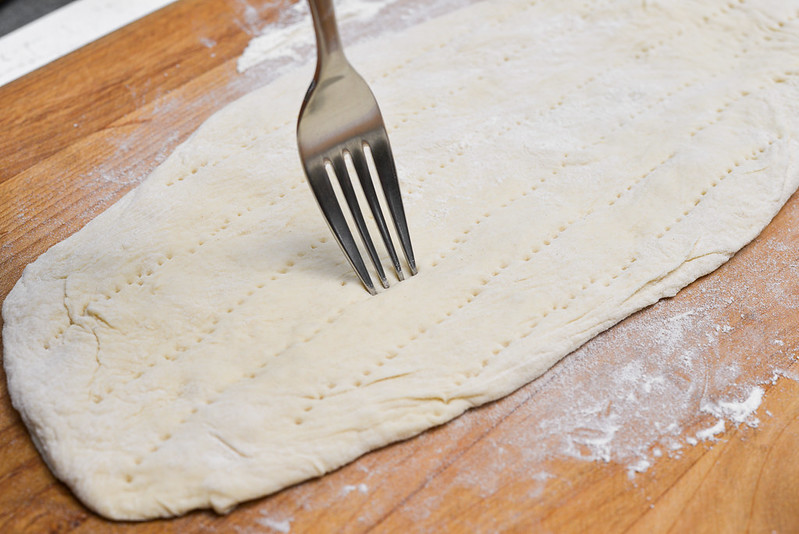 Then, working with one piece of dough at a time. I stretched it out into a larger and flatter oval on a floured cutting board. I then used the tines of a fork to poke dotted lines running vertically along the dough. This poking of patterns seems pretty quintessential for naan-e-afghani, but I think using the grill as the cooking medium ended up negating this step as the pattern ended being barely noticeable in the final product. 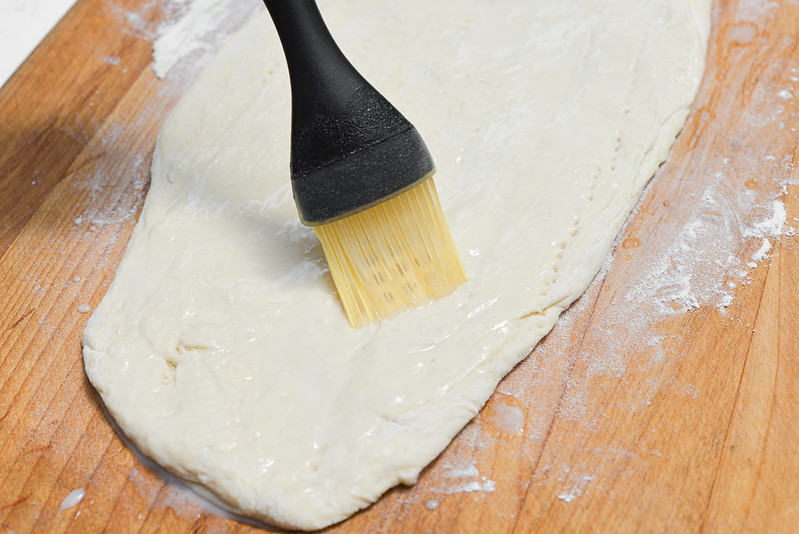 Also fairly ubiquitous is adorning the bread with some type of seeded seasoning, whether this be nigella seeds, sesame seeds, poppy seeds, or a combination of those. To get the seeds to stick, the dough needed to be moistened and I did this by brushing on a mixture of water and flour as a glaze. 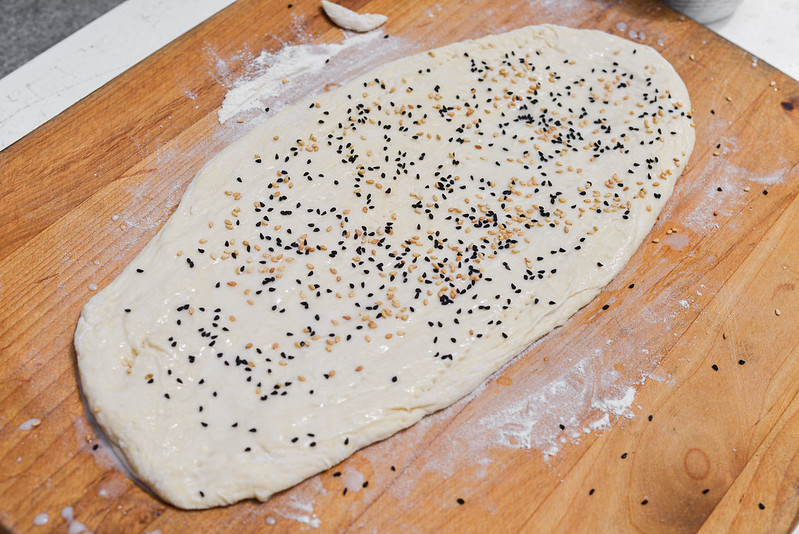 After brushing that all over the dough, I sprinkled it was a combo of sesame and nigella seeds since I had both on hand. I then picked up the dough and transferred it to the hot grill. 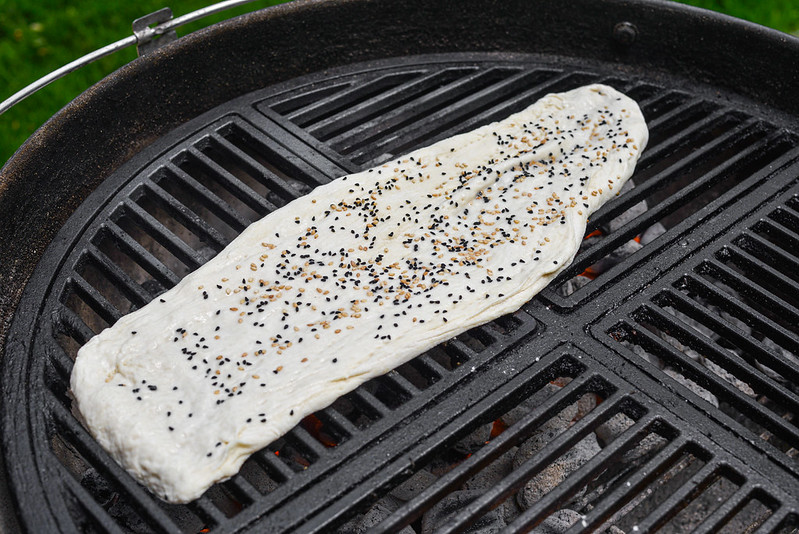 The large size of the dough made this slightly awkward and hard to fully maintain the shape I had stretched it out to. If you've ever grilled bread before, you probably know that perfection of shape is not easily attainable, so while I felt some annoyance that things didn't go smoothly and might not make a picture perfect product, it was also easy to brush off since it's just the reality of the situation. 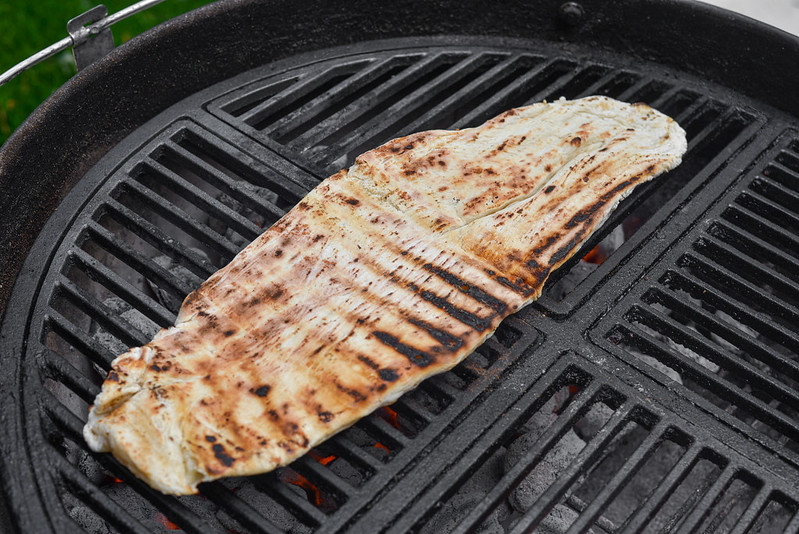 What did end up frustrating me was the actual cooking because a couple new challenges popped up with this bread. First, it's long size was well suited for the big surface area of the grill, but it also made it more vulnerable to uneven cooking as it stretched across various different concentrations of heat. This had me moving it around more for even cooking, and that was all fine until I flipped it and cooked the second side.

My initial fear was that the seeds may burn, but that didn't turn out to be a problem, what was and issue was the glaze, adding additional moisture that made the dough stick to the grates. Waiting until the dough was well cooked ensured that it released easily, but when you take the unevenness of the fire into consideration, when I first tried to move it some parts were done and starting to blacken, while other parts were not done enough and were still sticking to the grates. With the subsequent pieces, I learned my fire better and when best to try to move it, but still three pieces wasn't enough to get things down 100% on my first go at naan-e-afghani. 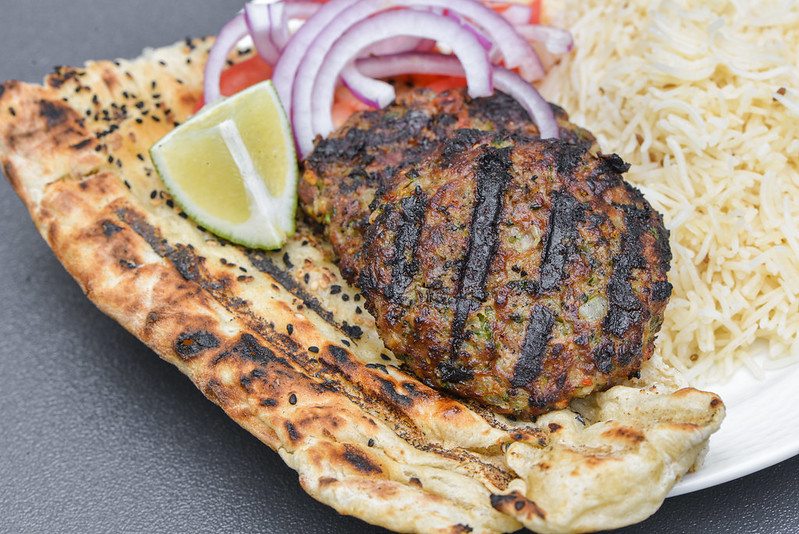 I was thinking maybe of giving it another shot before sharing a recipe to get better photos, but the bread tasted so great, I didn't want to wait. Again, comparing this to Indian naan, the bread was slightly denser with more of a chew. That made it taste more substantial—I thought my wife and I would eat all three pieces in one sitting, but we only got through a little more than one piece—but what gave this bread its most defining character were the seeds. While they added a little variation in texture, the nutty and roasted taste of the sesame seeds and earthy cumin character of the nigella seeds were both notable when eating the bread on its own, and they still had a presence when enjoying the naan with the super flavorful chapli kebab too. Taking the entire meal in, this naan-e-aghani went on to provide more proof points for taking the time to grill fresh bread because the whole experience certainly would not have been as satisfying, complete, or delicious without it. 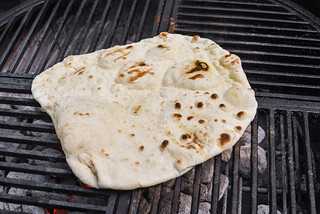 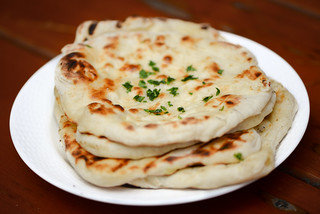