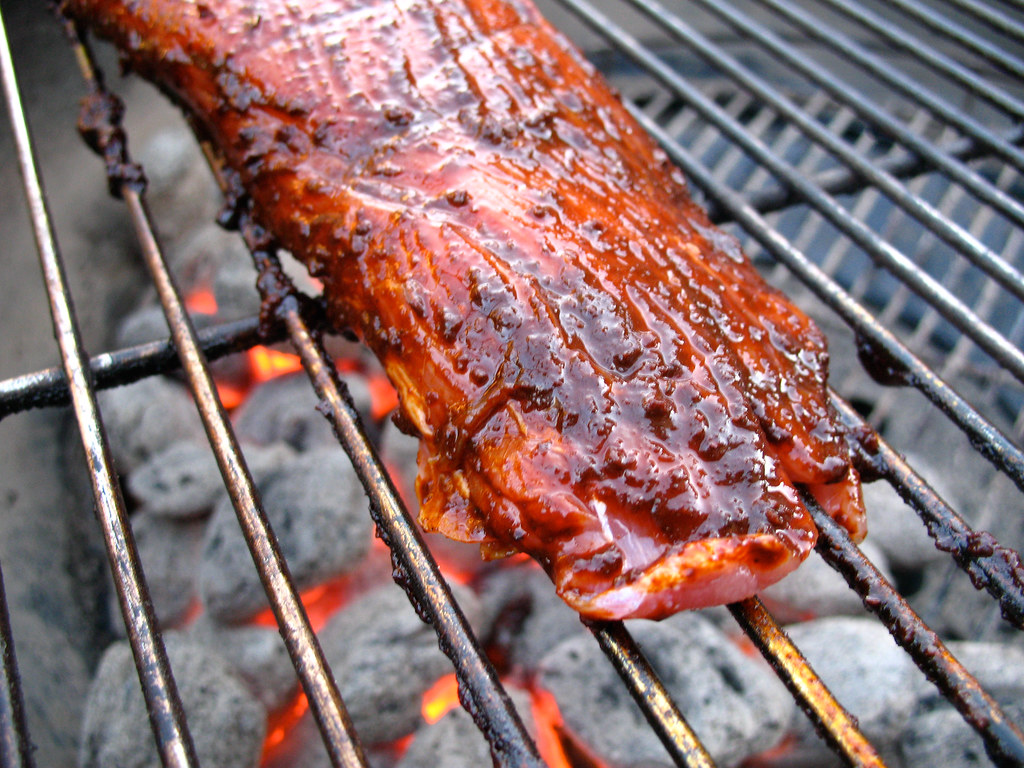 So I thought it would be fun to try to make something different to gear up for Cinco de Mayo and break away from the usual fajitas, tacos, guacamole (not that there's anything wrong with that). I turned to one of my favorite cookbooks, Mexican Everyday, in search for something that would possibly make the holiday a little more authentic, which is where I made my first big mistake. We all know that it's appalling for residents of NYC to attempt to make authentic Mexican food (salsa in particular) and I don't know why I ever thought that I would be an exception to this rule. 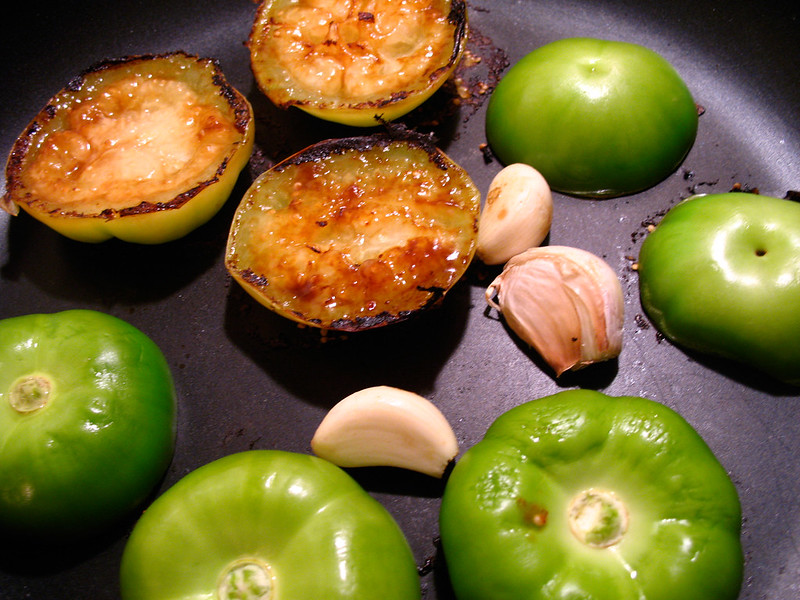 I went for a grilled pork adobado and sweet potatoes with a guajillo chile salsa, mainly because it gave me a chance to roast and grind a lot of peppers, a practice that I have come to love. I started with the salsa on Wednesday night, because salsa always seems to improve with a night's rest in the fridge. The salsa making went as well as could be expected, although the flavor was pretty challenging for me, but I discounted that and figured it'd mellow out a bit when it cooled off. Then came mistake number two. Being tired (ok, not really tired, but lazy) I skipped the rest of my night before prep duties, which included trimming the tenderloin then brining it, and making the sauce. With about and hours worth of extra work left for today, I was just asking for trouble. 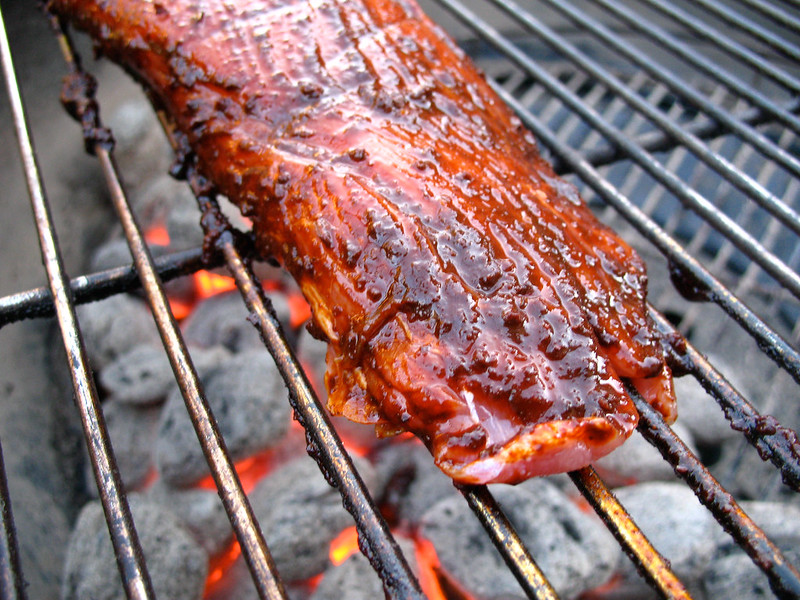 So I got home and went straight to work, getting the trimming and brine put together very quickly and then turning my attention to the sauce, potatoes, and the fire. Even with my super speed, I still didn't have the grill ready until 7:30, not leaving me any time for errors, and there were plenty on the way.

So the meat went on the grill, looked good, and smelled delicious. The girlfriend returned from working late and was excited by what she saw was for dinner, and in turn, I was even more excited now to get to the point to where we'd be eating this meal, which should have only been about 15-20 mins more. 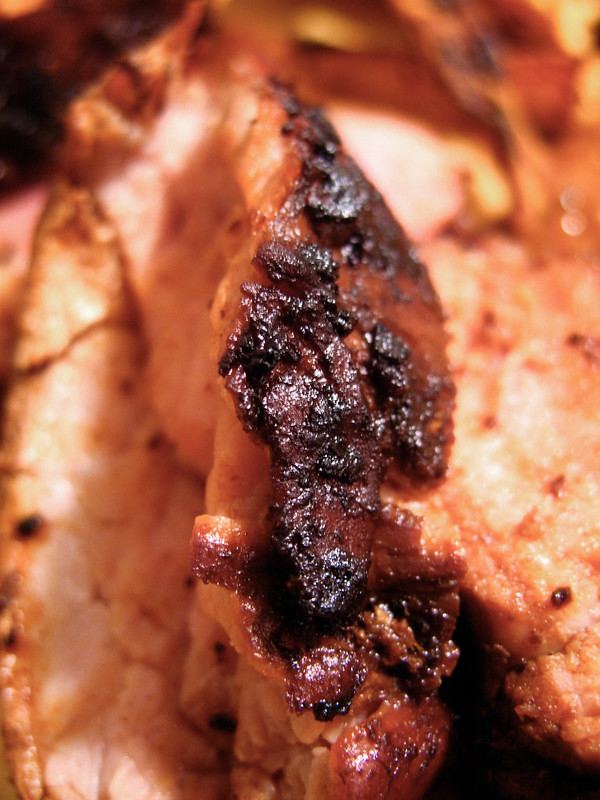 Indeed my thermometer chimed in at 145 degrees just when I was expecting it to and all seemed well. The pork rested for 10 min and then I eagerly cut the first slice which revealed a completely pink, undercooked tenderloin. The gf's excitement quickly turned into disgust and the tenderloin returned to the grill, but with the fire burning cooler, even 20 extra mins did little to help the situation.

Coming up to 8:30 with two hungry bellies, it was time to take a different approach. I removed the tenderloin from the grill and continued to slice it into medallions. Then placed the already cool sweet potato fries and pork slices into a very hot over to quickly finish the cook. (This an embarrassing way to start up a blog about grilling.) 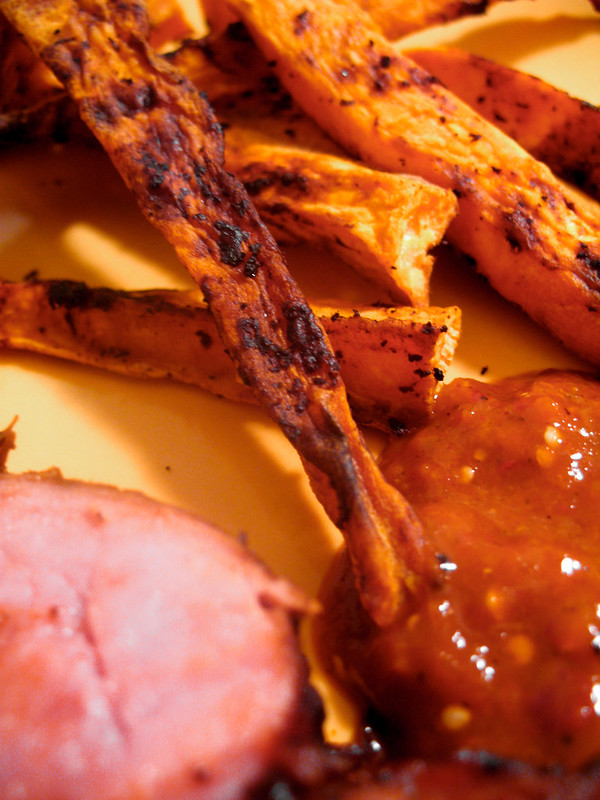 In the end the pork actually held up to the way it was horribly cooked, and I think the brining helped here. The pork with the sauce was decent, but the best part of the dinner was the way the sauce worked with the sweet potatoes. I love spicy and I love sweet, and have no problem mixing the two, and the hot browned bits of sauce tasted delicious against the sweetness of the potatoes. Unfortunately neither of us much liked the way the salsa went the pork or potatoes. It's definitely a very, very different type of salsa, not like anything I've ever tasted before, but also something I just didn't enjoy very much.

So from this experience I have come to a conclusion: Cinco de Mayo should be left to the fajitas and tacos of the world, because these are the things, for better or worse, that are the taste of a holiday that I have no reason to be celebrating. I've also learned that I'll have to make some fajitas this weekend, are you in?