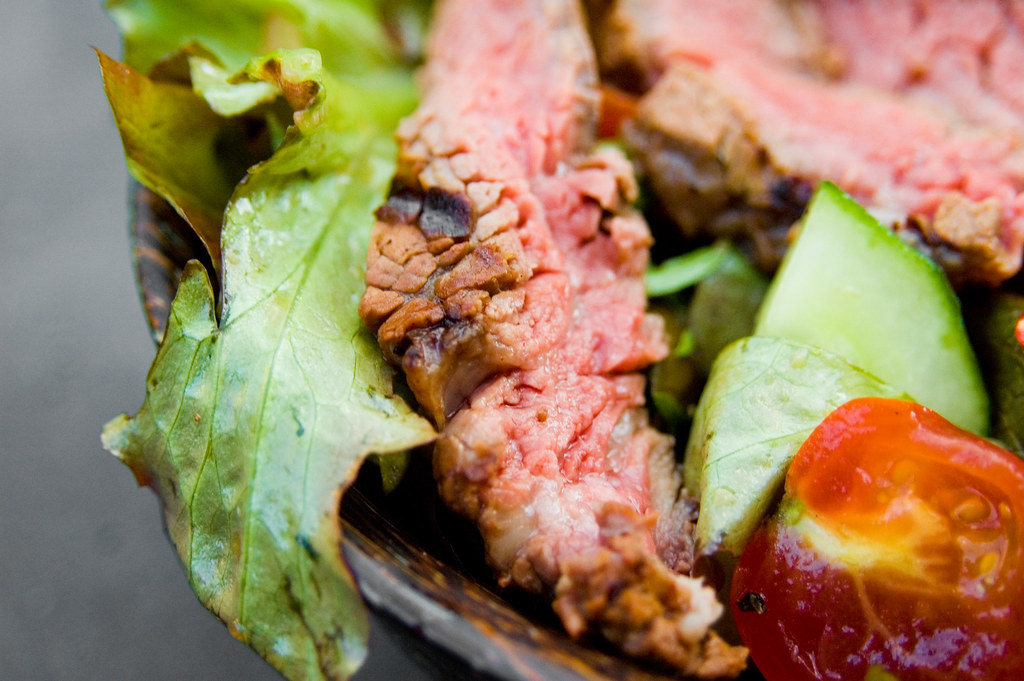 Excitement was in the air on Tuesday after work. After spending the winter trying to get on the Hellgate CSA, then being wait listed, and finally being accepted, the first distribution day was at hand. For those who are unfamiliar with a CSA (Community Supported Agriculture), here's how it works: A community of people pair together with a local farmer who provides fresh fruit and produce for the members once a week. So we get whatever is in season on the farm, and this week's share included red salad bowl lettuce, curly cress, oregano, radishes, leeks, and mizuna. Mizuna, hmmmm, never heard of that one before... So the gf went on a search to find a recipe that would utilize this salad herb, and low-and-behold, she found something that included 1/2 of this week's share, plus called for a nice steak on top. What can't she do? 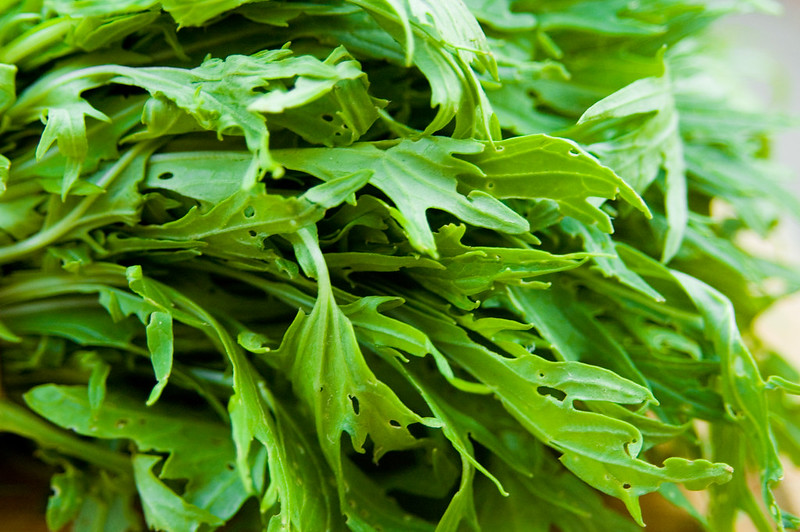 So what is Mizuna anyway? It's a Japanese mustard green mostly found in Asian salads that, based on the recipes we found online, seem to often be paired with seafood. As you might have come to realize, I'm not a big salad eater. I can only recall two occasions where I've ordered a salad in a restaurant, but really, if there's an $8 salad and an $8 burger staring at you on a menu, how can you ever pick the salad??!? Although we make salads a bit more often at home, I still never feel full on a bowl of leafy greens. It seems no matter how much salad I eat, I find myself digging into some chips or a bowl of ice cream later in the evening, which totally voids any attempt I had made at eating healthy. So when this salad recipe popped up on my gmail chat, I was a little skeptical, but then realized it called for an entire filet mignon to be thrown on top, and I was totally in. 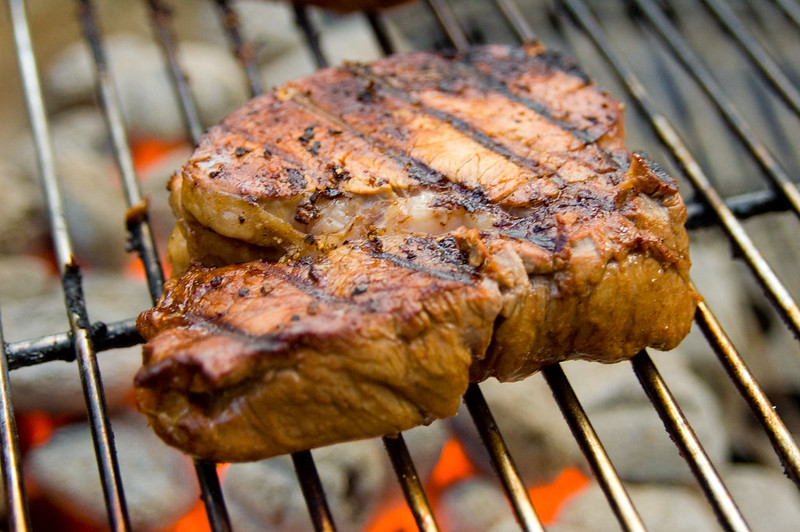 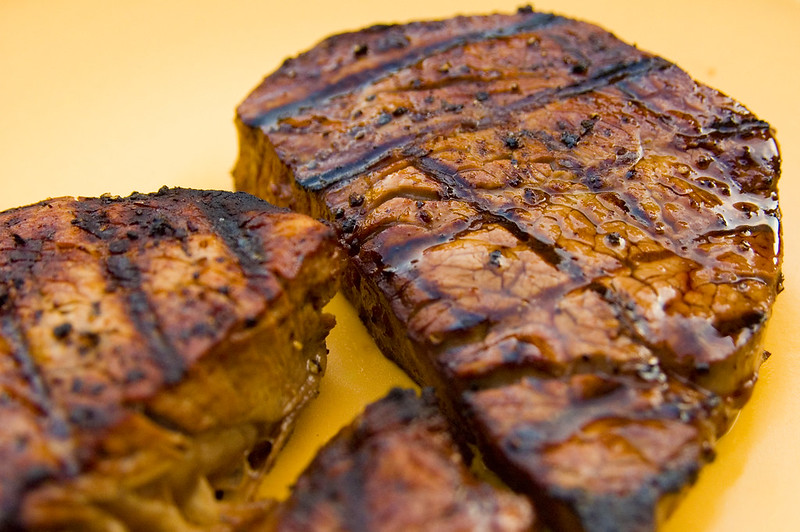 Not only did this recipe call for a steak, but it included an easy, short marinade, great for weeknight grilling (and I'm always looking for good weeknight recipes). It was only one hour from mixing ingredients, to letting the steaks marinate, to grill time. Filet mignons grill up nice and fast too. I had rather small ones, about 1 1/2 inches thick, and they only needed 3 mins per side for a perfect medium rare. Not to waste the heat, I also grilled up the leeks from the CSA share, but more on that at a later date. 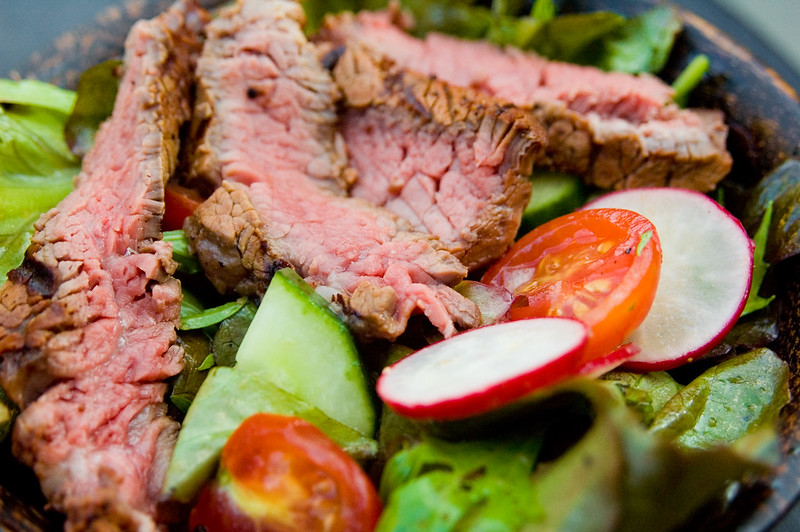 After a 10 min rest in some foil, I sliced these up on a bias, maximizing the pink juiciness in each piece. The gf was in charge of the salad and she did a great job. It looked more appetizing (even without the meat) than most salads I've come across. Both the salad and steaks alone were quite tasty, but put the two together and you have something special. The steaks had a nice spiciness that played well with the citrus dressing. My palate isn't refined enough to really pick out the flavor of the mizuna, but I could tell that there was something in there working more than the lettuce, giving it a more earthy and complex flavor than I'm used too. So for not being a salad eater, I found myself oddly enjoying this meal very much, and guess what? It's almost my bed time and I haven't had the urge to eat anything else, score 1 for the salad.