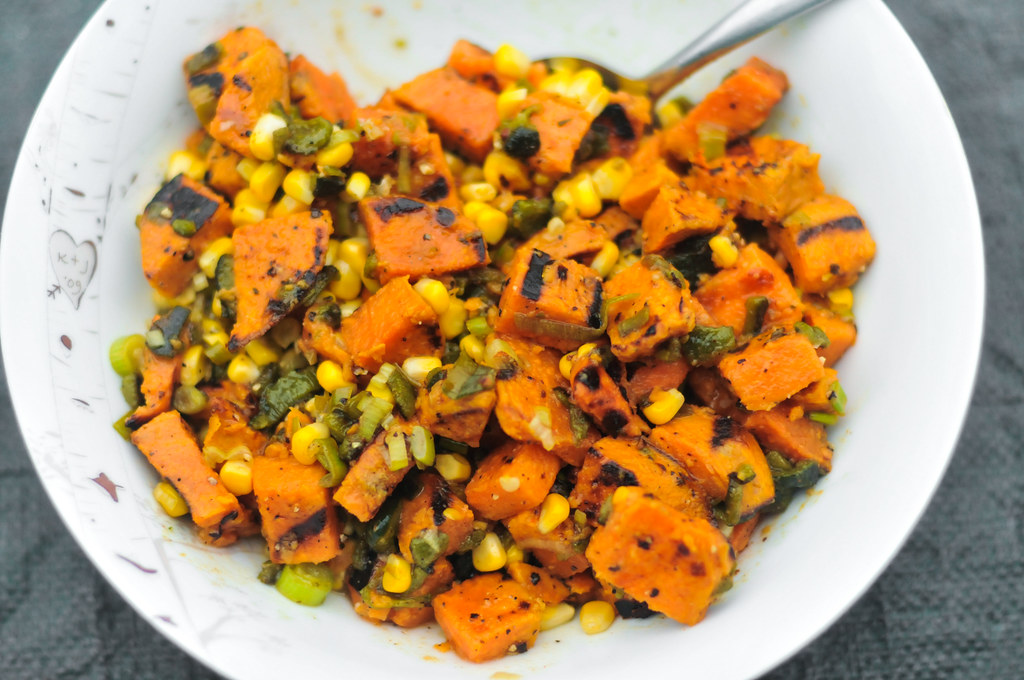 One Thanksgiving staple I've never really been able to get behind are candied sweet potatoes. The natural sweetness of these tubers are one of my fall and winter pleasures, so why would you go and mask that with more sugar and marshmallows? Makes no sense to me and the dish feels as if I'm eating my dessert next to my main course. If I were to do a sweet potato side for the big holiday meal, it would be more in line with this sweet potato and corn salad, which I first came across when I was hosted at a tasting of recipes from the Brother Jimmy's BBQ Book. 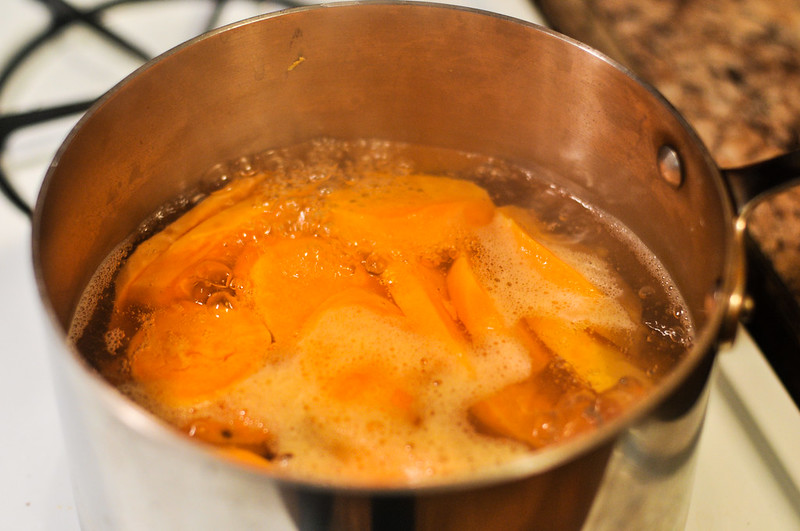 A roasted sweet potato is an incredible thing—a soft and silky texture that merely needs a little salt and pepper to give a savory quality to its sweet flavor. It's a treat, but damn does it take a long time to cook. For this salad, I wanted that wonderful soft texture, but needed the spud to keep its shape and also didn't want to spend an hour on the roast either. The solution was to give the potatoes a kick start on cooking by boiling them before being grilled. The potatoes were peeled sliced, and then cooked until they could be pierced with a paring knife with little resistance, but still were sturdy enough to retain their structural integrity. 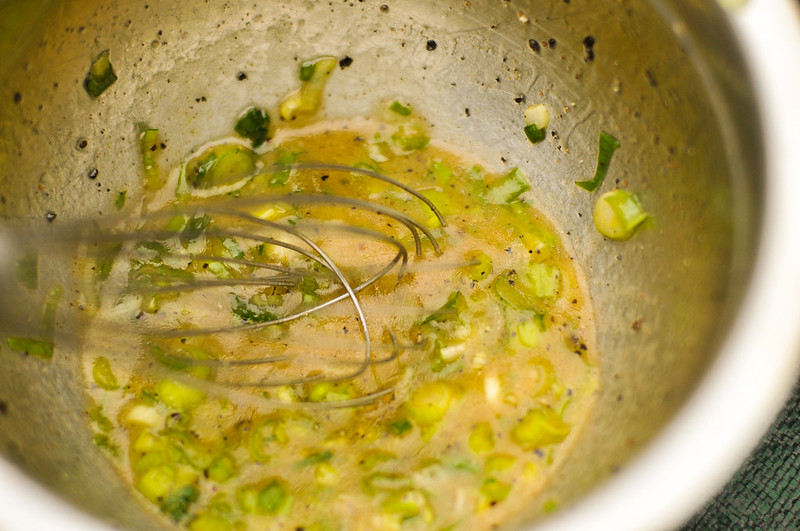 As the potatoes boiled, I put together the simple sauce that would dress the salad at the end. This comprised of oil, lime juice, cayenne, and scallions. It was a minimal mix of flavors that would contrast against the sweetness of the potatoes and corn in a good way. 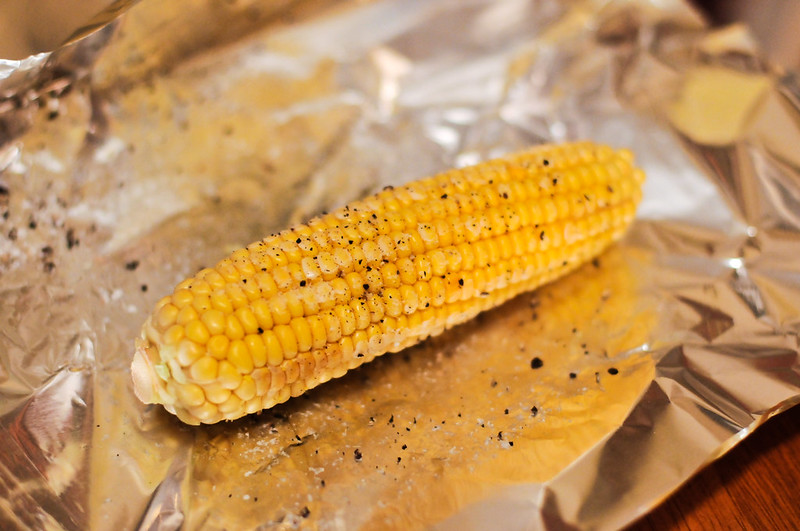 Spuds and sauce complete, it was off to the grill to getting all the parts of the salad cooked. This included an ear of corn, which was buttered, seasoned, wrapped in foil, and cooked over direct heat until some light charring happened. The kernels were then sliced off the ear. 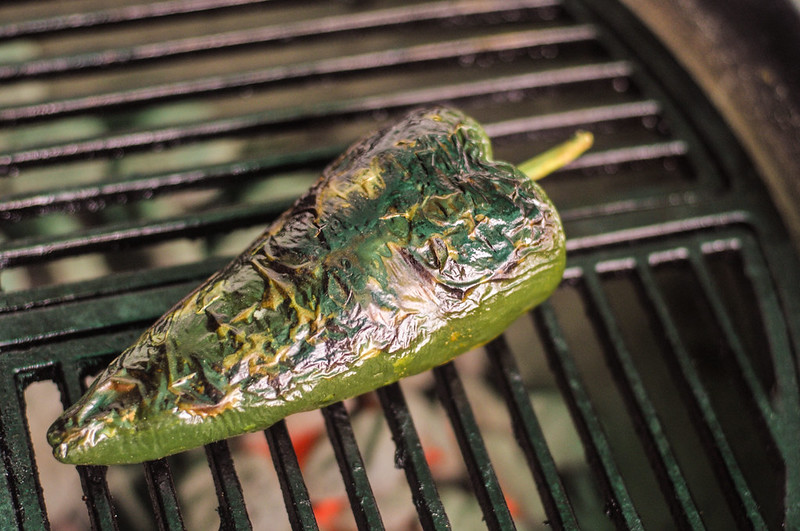 A large poblano was also roasted to give the final salad a light fruity heat. This was cooked until it was charred all over, then set in a covered bowl to cool. The blackened skin was scrapped off, the pepper stemmed and seeded, and chopped into a fine dice. 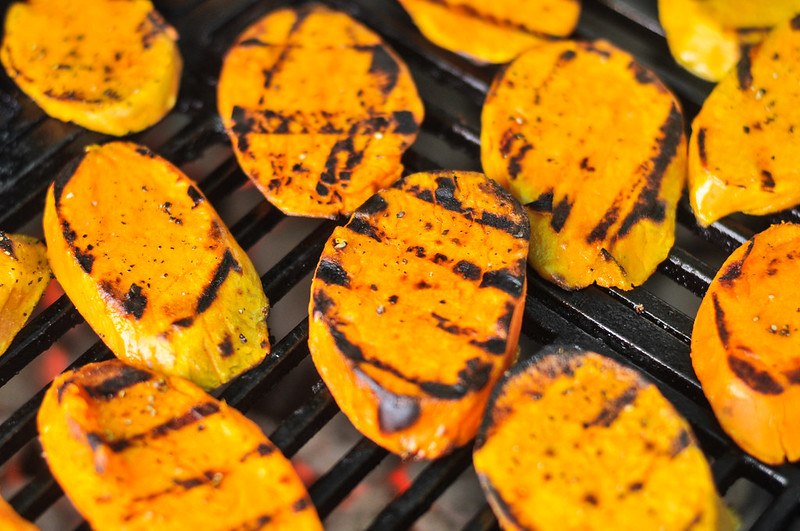 Finally came the potatoes, which only needed to develop some color on the outside since they had already been cooked in the boiling water. It took about four minutes per side to give them some attractive grill marks, and they were then cut into a half-inch dice. 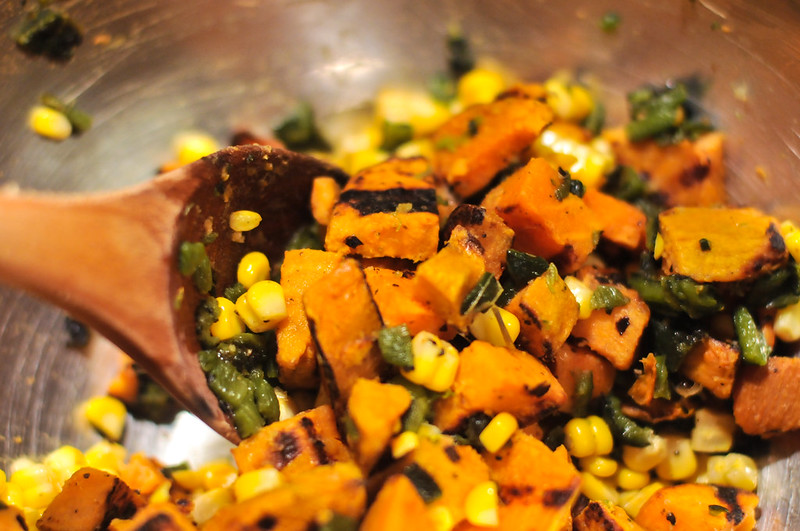 All of these were combined together with the dressing. The salad was then sat for ten minutes to allow time for the flavor to meld. 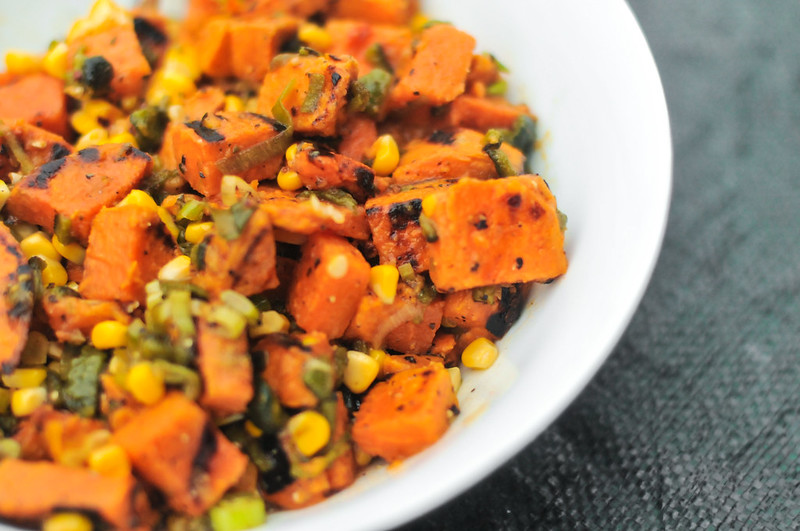 I admit the Southwestern influence of poblano peppers and the lime dressing paired with grilled sweet potatoes and roasted corn may not jive with all holiday meals, but it's a combination that works quite well. The earthy, natural sweetness of the potatoes dominates the salad, while the corn imparts another layer of sweetness with each bursting kernel. The poblano lends a mild fruity heat, and the lime and green onion dressing adds a contrasting acidity and freshness.

Yup, this is what I call a good use of sweet potatoes, which are now slowly, but surely, starting their annual progression to becoming the centerpiece of my fall and winter diet.