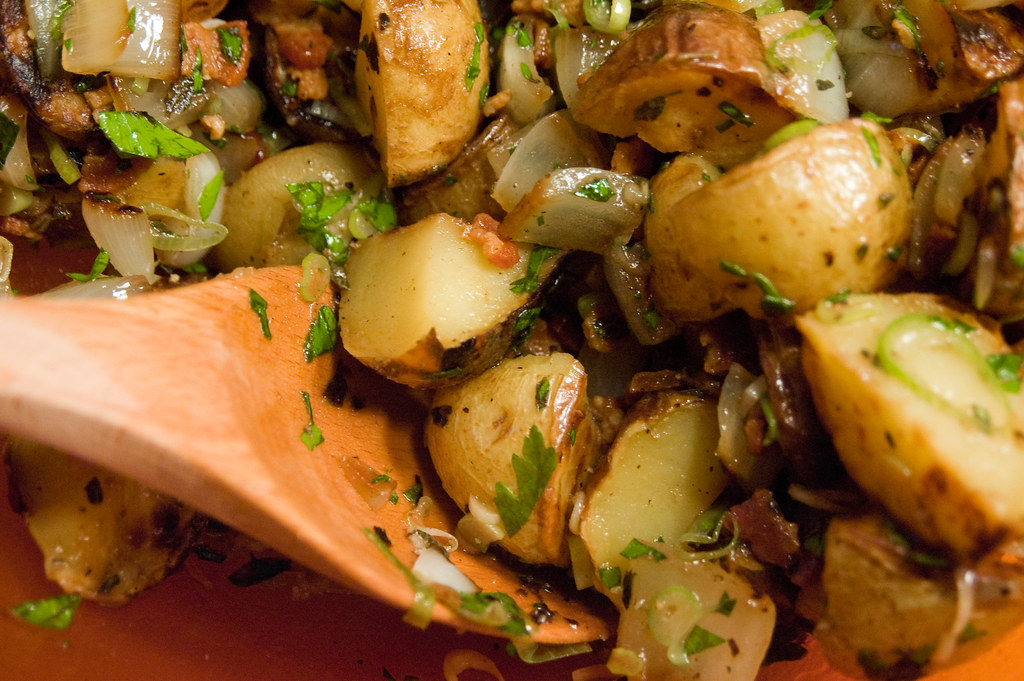 I had written off potato salad as a totally unnecessary part of my personal food culture. It seemed to pop its head up all over my family's affairs. Those cold, bland potatoes soaked in mayonnaise, prompted a "this is so gross" face every time I crossed paths with this so-called salad. That was until I took a leap of faith and made my own potato salad last year. A recipe that involved both grilling and bacon roused my interest, resulting in a revelation of what a potato salad can, and should, be. 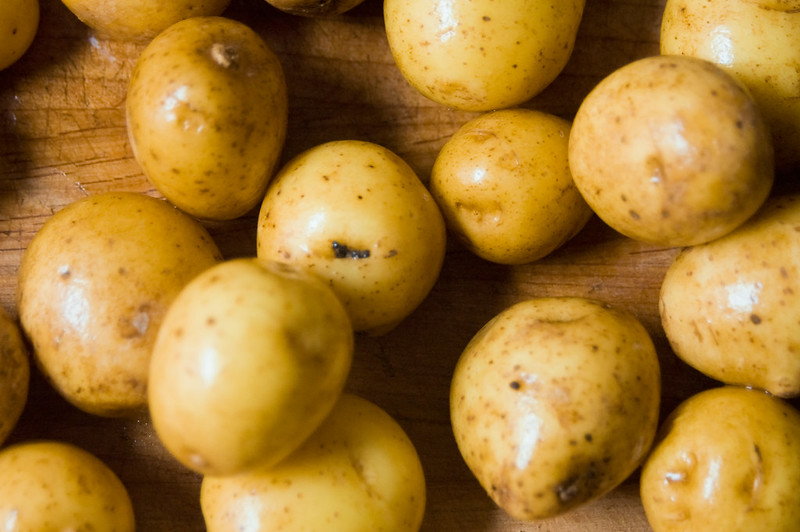 I've had barbecue and grilling books ever since I bought my first grill 5 years ago, all which contain recipes for potato salad. It took 4 years until I mustered up the courage and set out to actually make one. I went with a salad that started with new potatoes, which had always been my favorite for roasting. These beautiful, waxy little guys cook up with a nice browned outside and a creamy inside, which is harder to accomplish when using the standard russets. 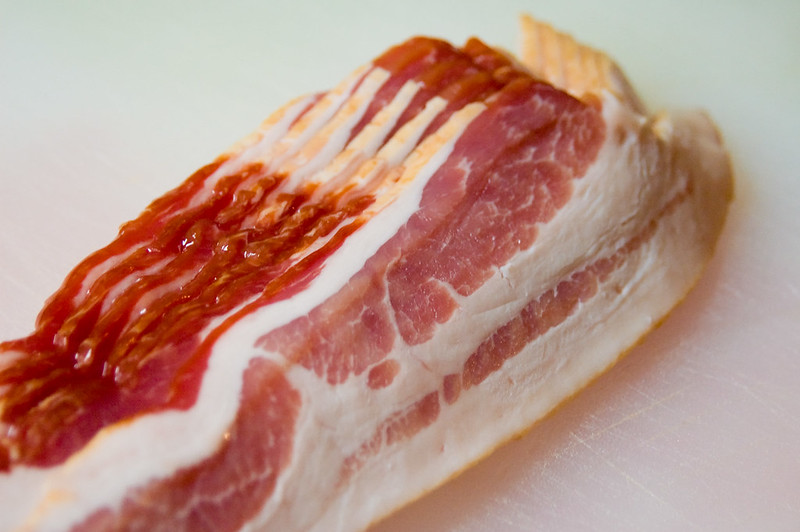 What really made me take notice of this particular recipe was the call for 1/2 a pound of thick cut bacon, and then the subsequent use of the bacon fat later in the cooking process. Rightfully, I feel any recipe with a lot of bacon warrants my attention, as I have yet to find anything that isn't improved with the addition of bacon. I've even been pressed to make a bacon ice cream, which doesn't seem like a bad idea...maybe next Meatwave? So I chopped the bacon and cooked it over medium heat in my cast iron skillet until it was extremely crispy, rendering as much fat as possible for later use. 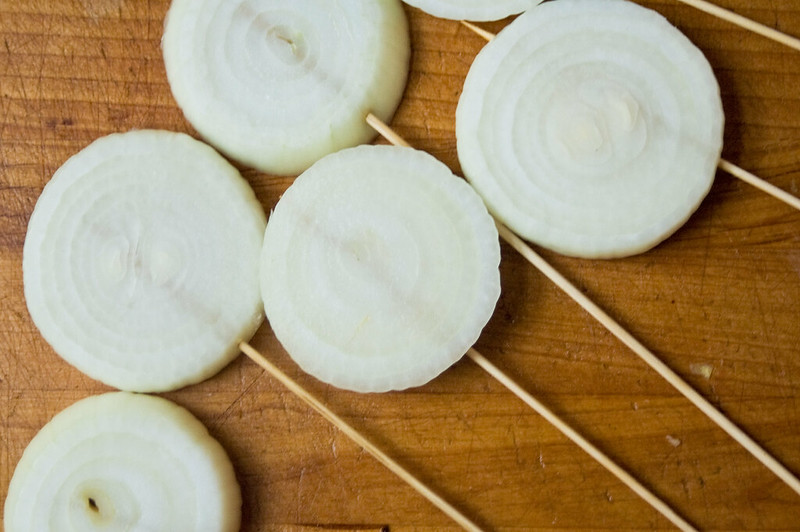 This recipe also called for Vidalia onions, and lots of them. Vidalias are, by far, my favorite onions. When they are in season, I find myself incapable of leaving the grocery without some. I love grilling onions until they're thoroughly caramelized and sweet, and Vidalias make this even better and sweeter, they're the onions of the gods. I've found, after many lost onions, the best method for grilling them is to slice them into rings 1/2 inch thick. Then push a skewer through the entire ring, this will keep them together and from falling through the grate while they cook (and shrink). 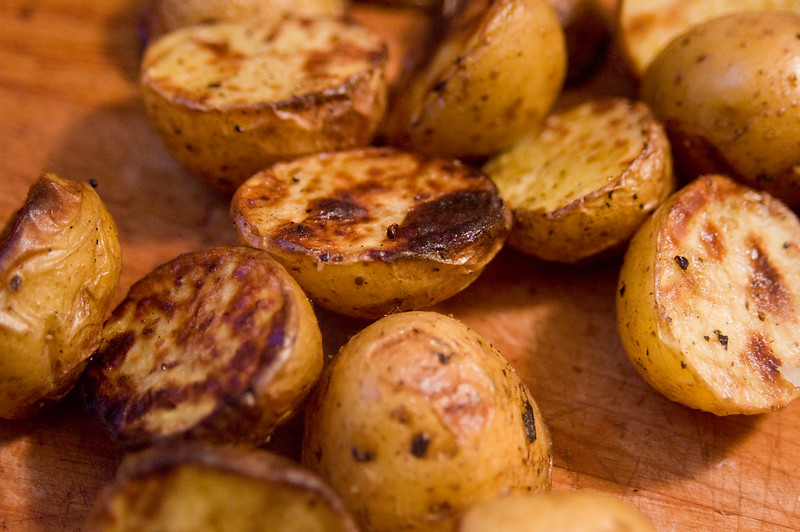 Grilling potatoes also took some tries to get a good method down. They take about 20 minutes to cook, so leaving them over the hot coals just burns the hell out them, and burnt does not make a good potato salad. To get around this, I used a two zone fire when grilling them. First I browned the potatoes on all sides over the coals, which took a little over 5 minutes over the very hot fire. Then I moved the potatoes to the cool side of the grill, covered it, and let them cook an additional 15 minutes, until I could pierce a knife through the middle of them easily. Then end result was picture perfect crust, with soft, creamy insides. 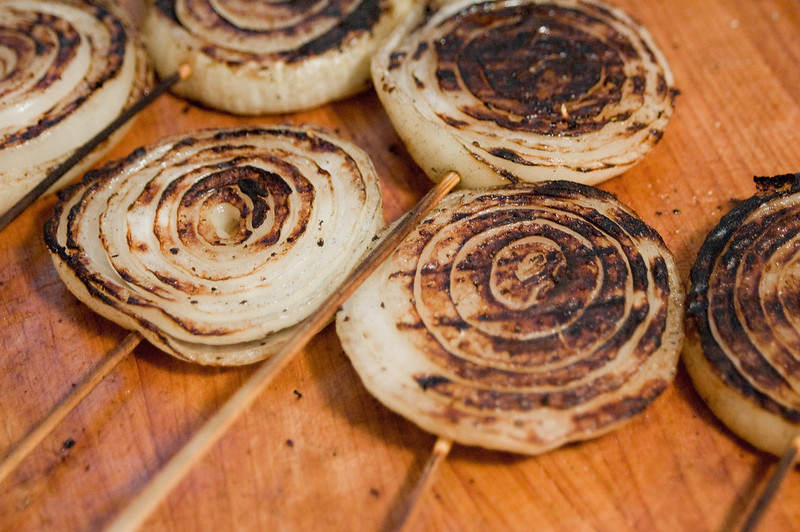 Now let me tell you about a marriage made in heaven. I took the Valadias I've already wax poetics about and the leftover bacon fat, and combined the two. I brushed the onions on the skewers with bacon fat on each side, sprinkled with some salt and pepper, and grilled. If you think nothing gets better than grilled onions, try grilled onions brushed in bacon fat, you will not be disappointed, I guarantee. I sat with the onions while the grilled, making sure they cooked to just right balance of tenderness with a little crunch still left. 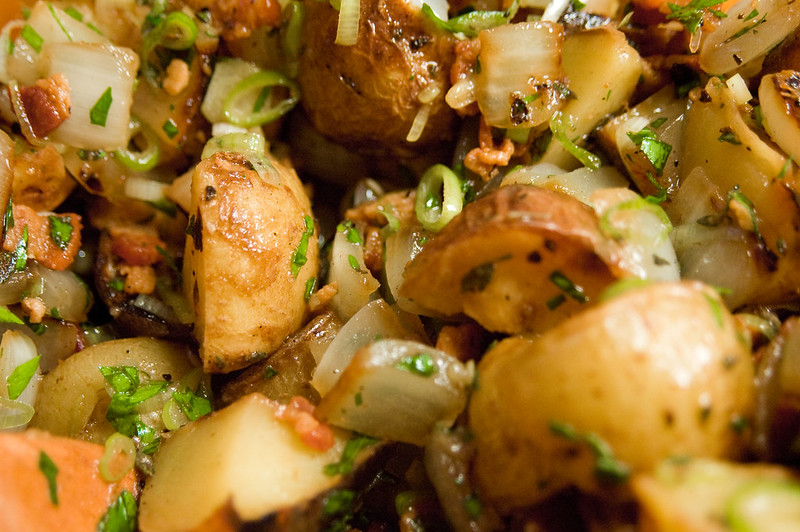 Now I combined the onions, bacon, and potatoes along with some green onions and parsley I got from the CSA, thyme, and a nice sherry vinaigrette. Then I let the whole thing sit out at room temperature for an hour before serving, which was essential for the flavors to meld. My first taste of the potato salad, when I first combined it, and my second taste after it sat for an hour, were two completely different experiences, the later being impressive and the former being "eh." After that hour, it was time to totally dig in, and we all did a lot of that. There must have been enough salad for 10 people, but we finished the whole thing between five. My three servings helped the effort.

This potato salad has shown me the treasures that are hiding beyond that stuff you see in your grocery's deli case. Potato salad has now become part of my regular diet, but none that I've made have been as delicious as this one. So next time you see some of that nasty mayo thick potato salad sitting out and wonder how anybody eats that stuff, remember potato salad doesn't have to be that stuff, and if you give this one a try, you'll know exactly what I'm talking about.

From Weber's Big Book of Grilling 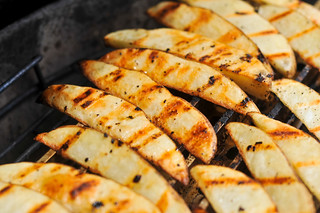