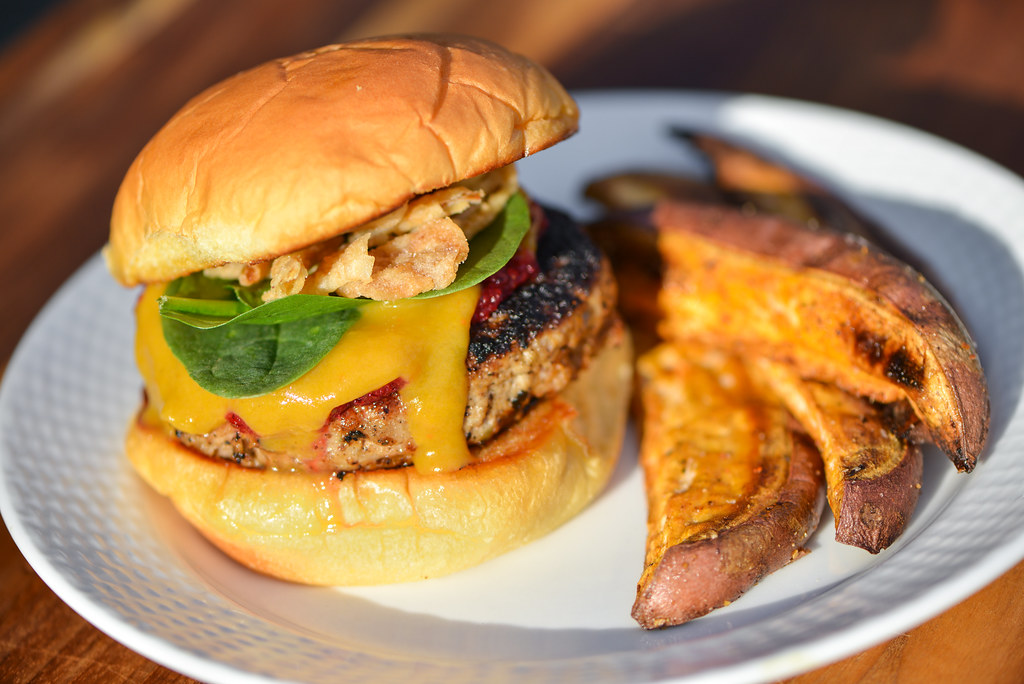 I've never been a fan of turkey burgers, which are all too often dry and flavorless. In the past, I've resorted doctoring them up with tons of mix-ins to compensate for their inherent shortfalls. 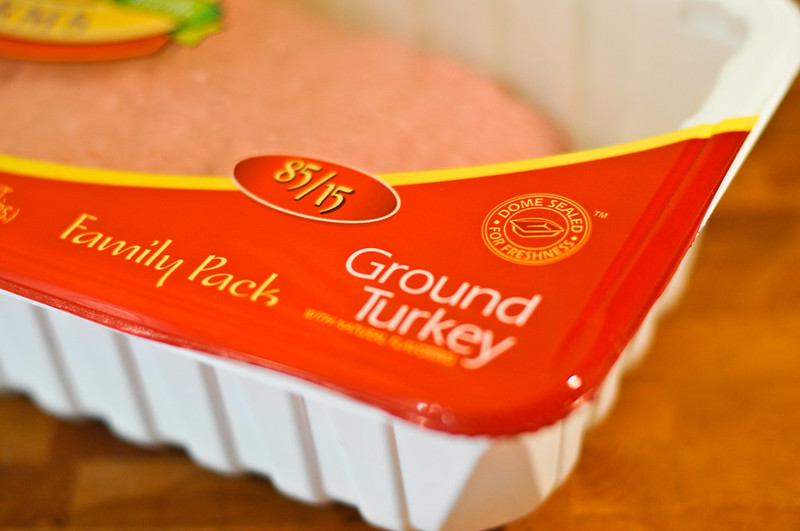 In this incarnation though, I did want to feature the turkey more than the barrage of herbs, spices, and veggies I've turned to in the past. So to get a burger that would taste like turkey and still be juicy, I turned to ground turkey that had as much fat as I could find—15% in this case. 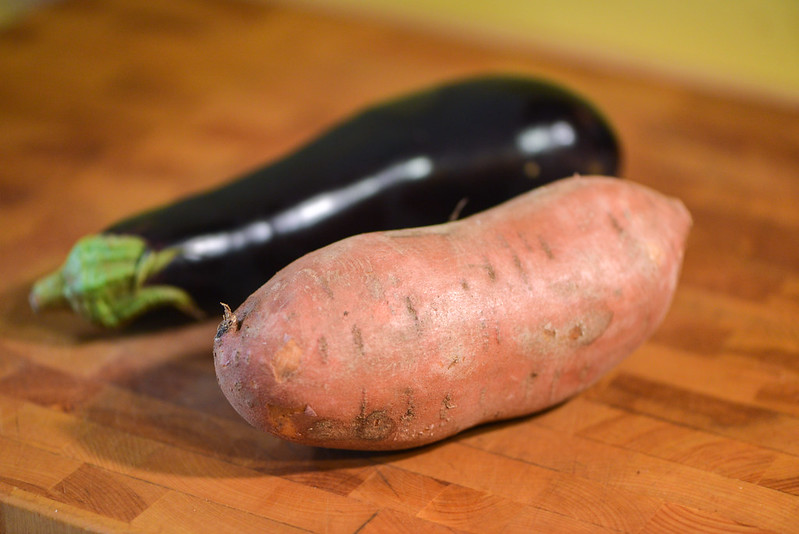 From my past experience with burger-making, I knew that 15% fat wouldn't be quite enough to ensure a juicy, full-flavored patty. I looked to other ways to add moisture into the mix and saw Kenji at Serious Eats found that eggplant played that roll really well. I started to wonder though if a sweet potato might be able to do the job in its place, with the added bonus of incorporating some classic Thanksgiving flavor. 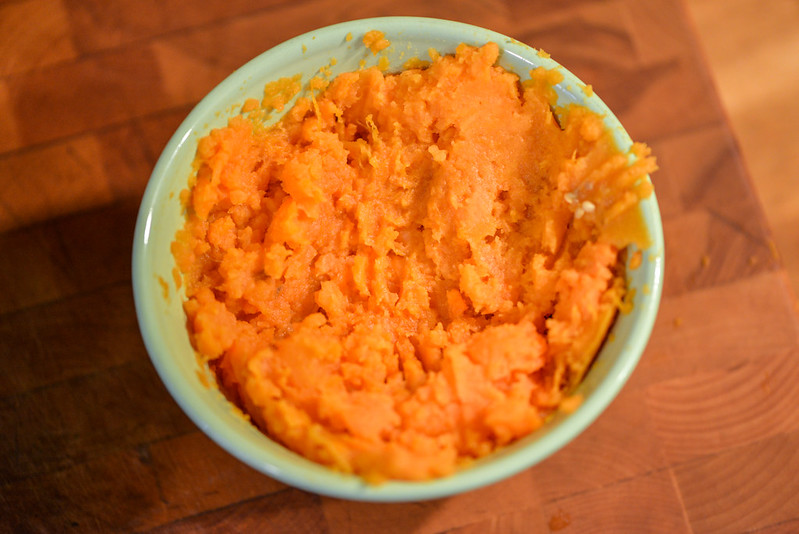 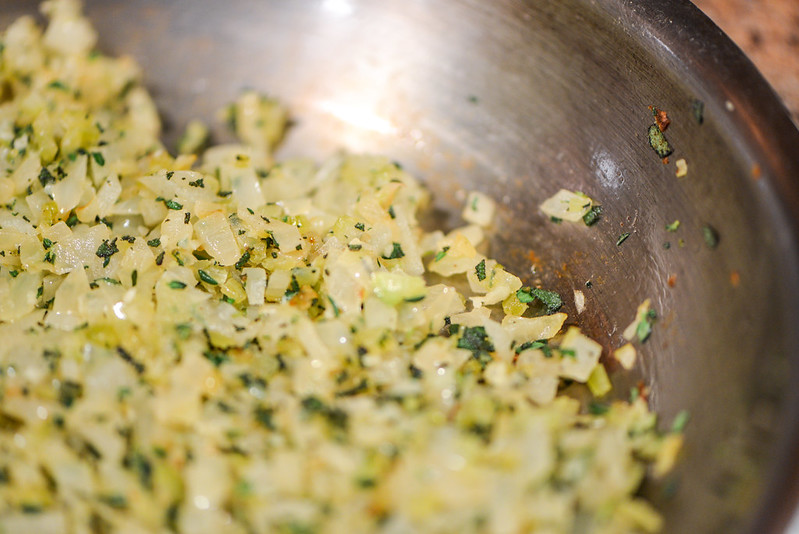 Although I planned on hitting the full range of turkey day dishes with my burger toppings, I still wanted the burger to strike the right balance of a rich, meaty base and a mellow Thanksgiving flavor. The sweet potato was just the start—I also sautéed onion and celery until softened and finished them with a healthy portion of sage, thyme, and garlic. 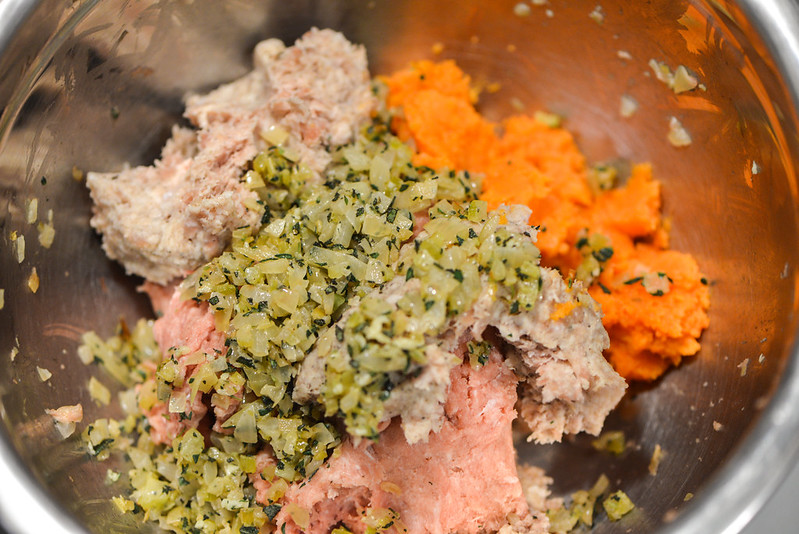 Once my veggie and herb mixture had cooled off, I divided it up into each batch of burger meat, along with a third of a pound of loose pork sausage—my favorite flavor in my family's signature cornbread stuffing. 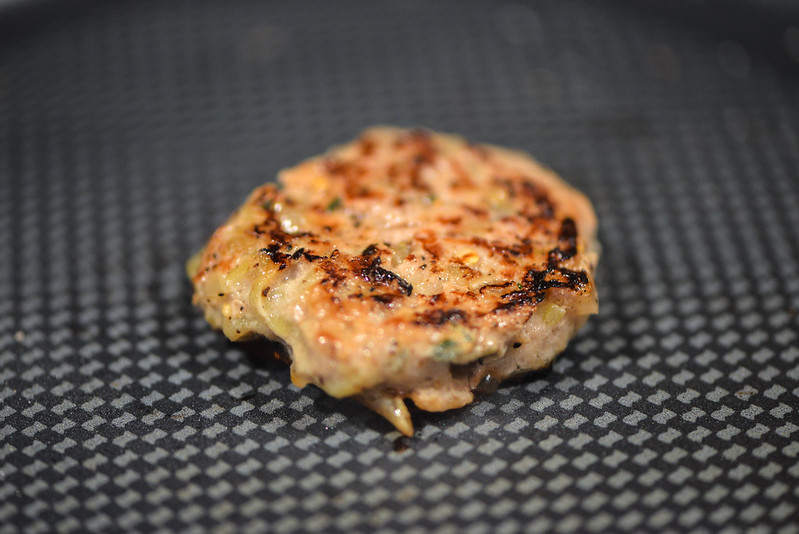 Once combined, I cooked up a couple of small test patties. Both were killing it, and the difference in moisture content was almost indistinguishable, probably thanks to the addition of the fatty pork sausage. But the potato mix had a mild sweetness that went especially well with the veggies and herbs, for a great Thanksgiving-quality flavor profile. Neither batch was excessively seasoned, allowing the turkey to really shine like I had hoped. 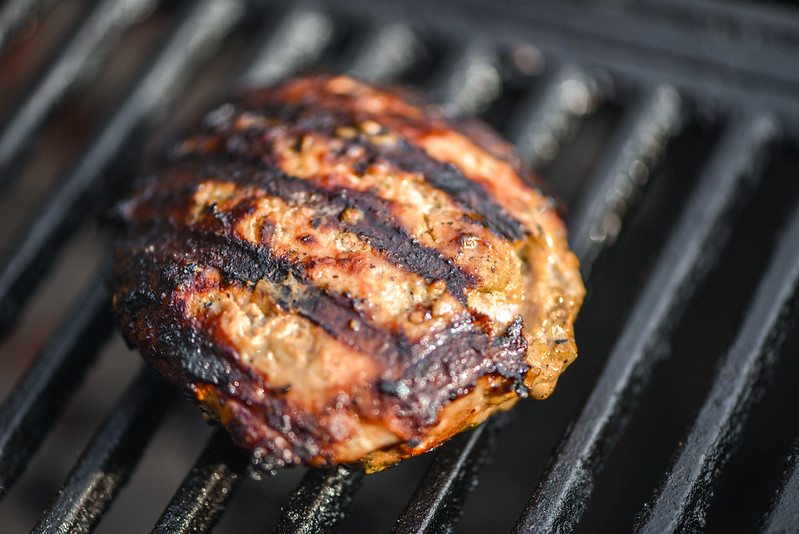 Confident in my burger's quality, I formed the ground meat mixture into patties and headed out to the grill where I cooked them over direct heat until well seared and just slightly undercooked at 145°F—I will take a minimal risk with my turkey for juicier, tastier results, but if you want to play by the rules, you can cook the patties to 165°F and they should still be great. 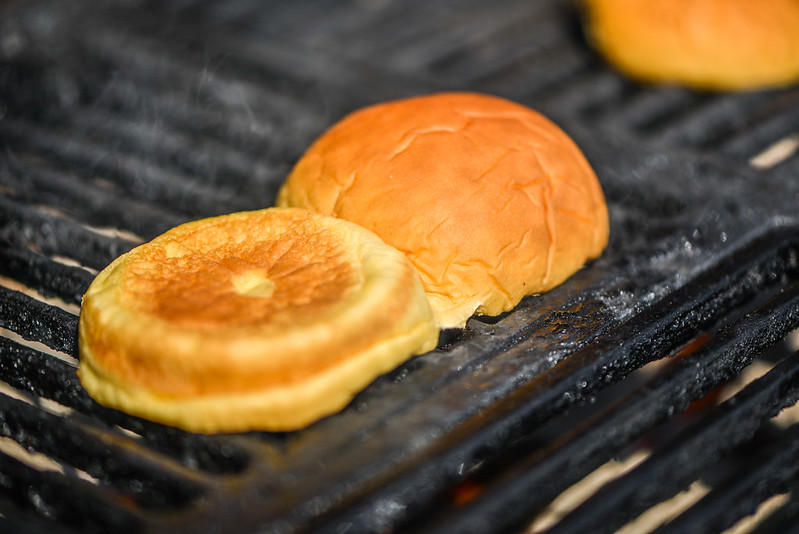 The burger was just the beginning, though: I had grand plans to put together an array of toppings that would make this the ultimate Thanksgiving-quality meal all wrapped up in sandwich form. This started with toasting a buttered potato roll until it was lightly browned and crisp. 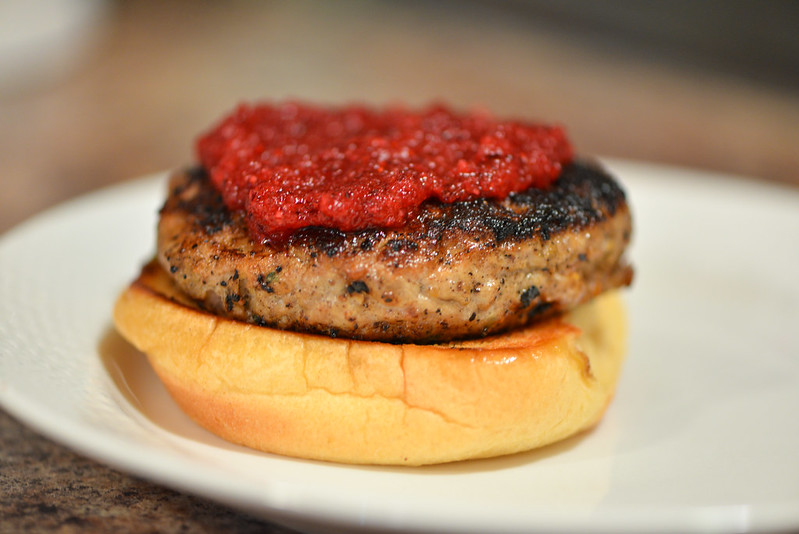 I rested the burger atop its buttery, pillowy throne and spread it with a layer of cranberry-apple relish. This relish has about half the sugar of regular cranberry sauce, so it really highlights the tartness of the cranberries and the sweetness of the apples. 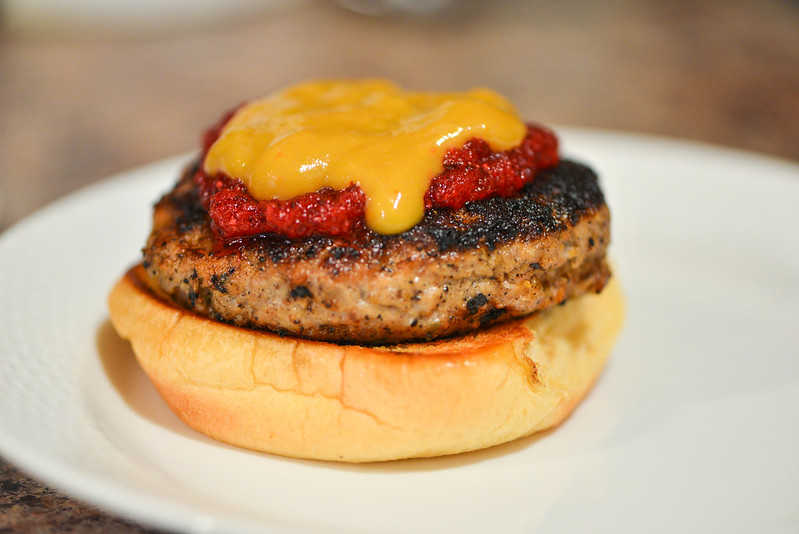 Next came the gravy. I used an all-purpose gravy because I didn't have the required turkey drippings or stock to make a standard turkey gravy. It was a little more work, but the flavor was totally worth the extra effort in the end. 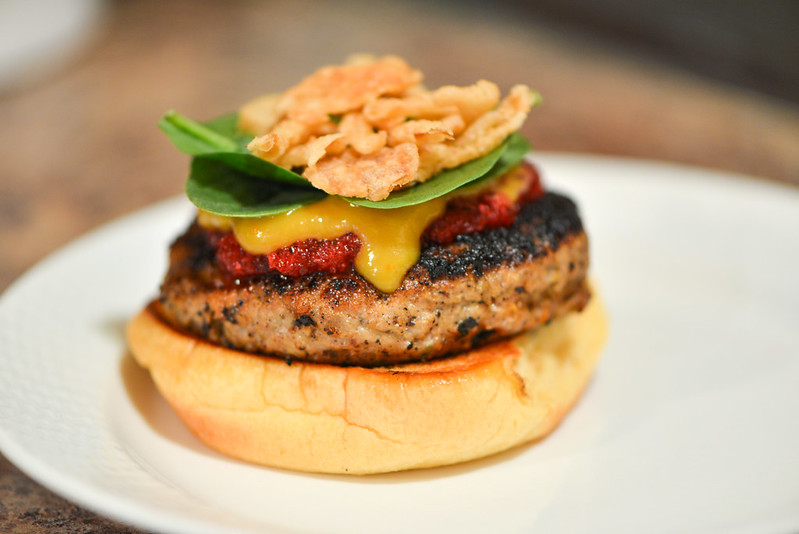 Then some spinach went on for greenery, and finally French's fried onions, because my Thanksgiving meal isn't complete without those greasy little pockets of salt to cancel out whatever healthier food they're resting on top of. 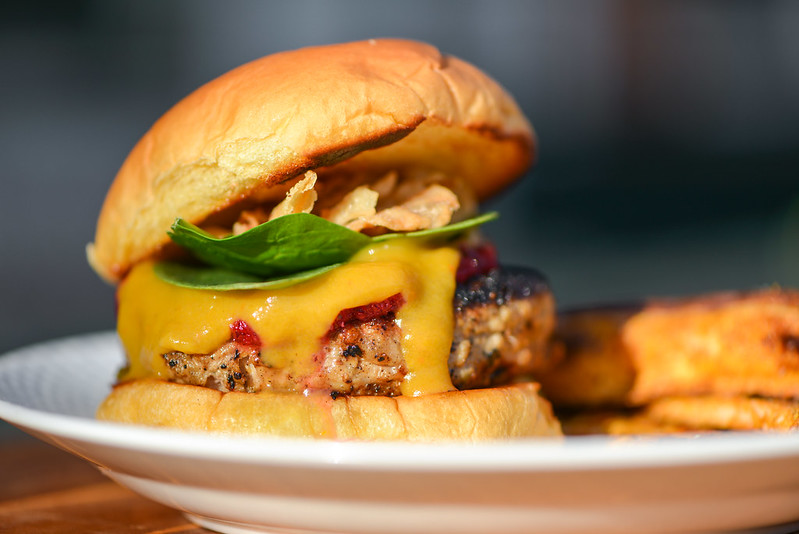 The base patty was nice and juicy, with just the right herbal touch and sweetness. The cranberry relish provided a sweet and tart contrast, while the gravy amped up the richness and enhanced the poultry flavor. Spinach lent a freshness, and the fried onions a salty crunch.

So there you have it, Thanksgiving on a bun. Actually, that's shortchanging it—this is its own masterpiece. One whose holiday influence shouldn't pigeonhole it into a once-a-year event. All the flavors work in harmony to deliver an all-around great burger experience, which is definitely not something I say lightly when it comes to turkey burgers. This is great eating, no matter the time of the year. 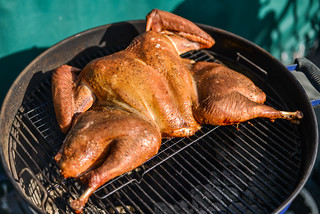 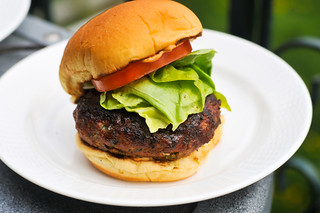