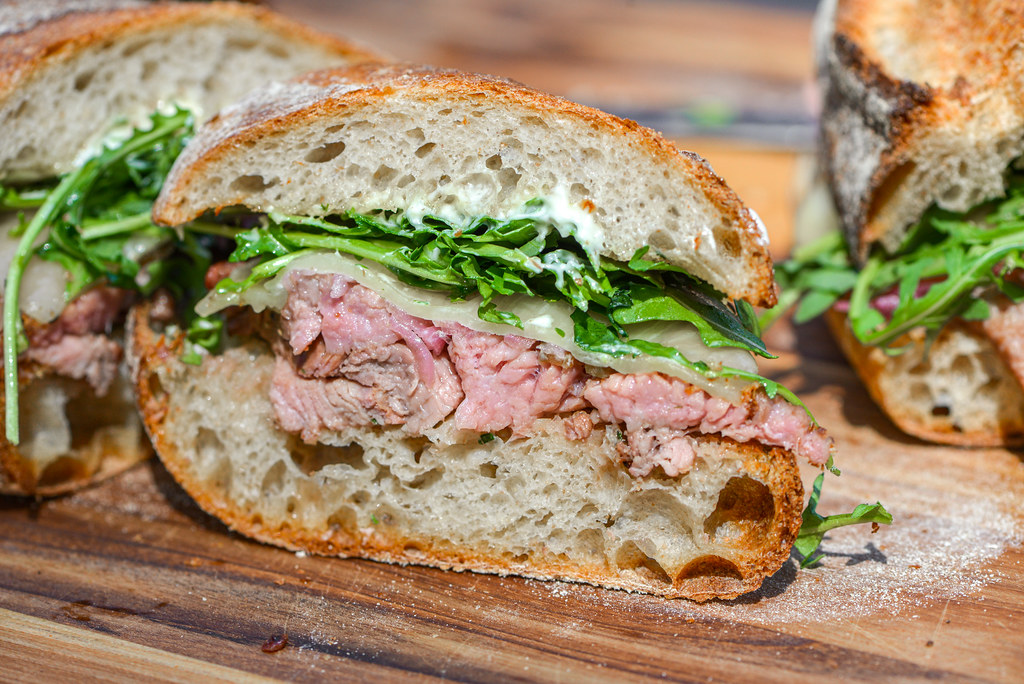 I remember clearly the first time I ever hear of tri-tip was when Amy Mills so kindly hosted me at the Best in the West Nugget Rib Cook-off in Reno and she was going down their offerings for the event which ended with tri-tip, something she said they don't cook at their restaurant back in Illinois, but was a requirement for the West Coast crowd. I became a bit fascinated by this triangular piece of sirloin that's considered California barbecue, but due to its obscurity in New York, I don't think I had it again until five years later when a newly opened Trader Joe's became a local source that didn't require any special ordering. I did a couple tri-tip recipes that resulted in a fondness for this cut in my heart, but then I relocated to North Carolina where tri-tip again felt out of easy reach. Perusing a newly opened Wegman's recently, I noticed that tri-tip was a cut they kept stocked and that's what jumped me into action, grabbing one and getting back on the bandwagon with these tasty tri-tip sandwiches. 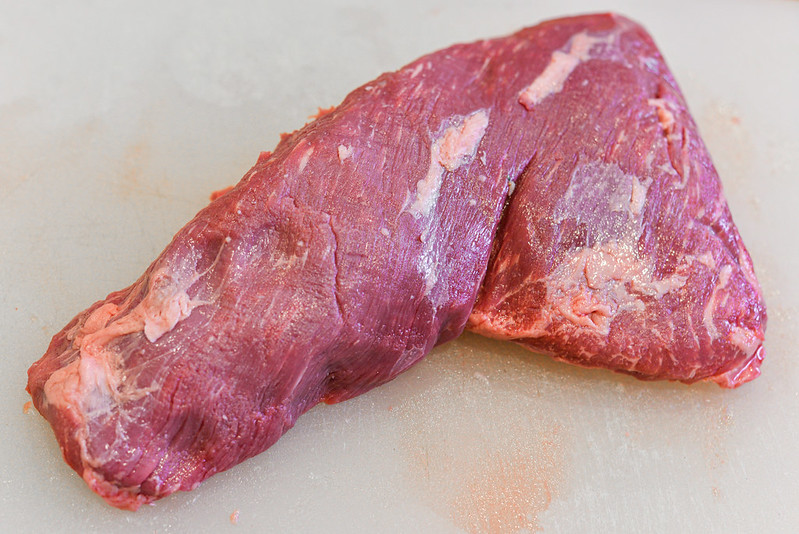 For newbies to tri-tip, this is a cut taken from hip area of the bottom sirloin and is a muscle that helps move the hind legs of the cow. While you'll likely find tri-tip marketed as "barbecue," it's actually usually cooked over high heat to a medium or medium-rare doneness because it lacks the intramuscular that allows cuts like brisket or short ribs to be slow smoked to over-doneness and come out nothing by tender and juicy. 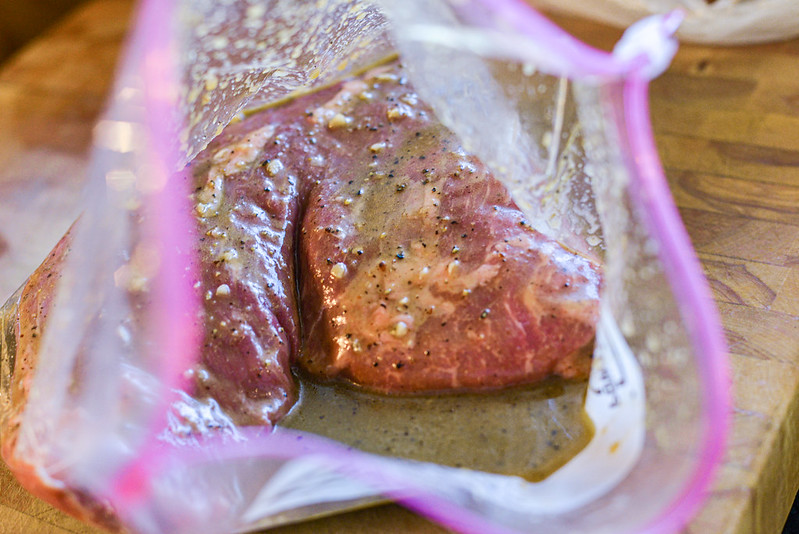 The most traditional way to do up tri-tip is Santa Maria-style, which is merely seasoned with garlic, salt, and pepper before being grilled, and then often accompanied by a salsa. In my recipe development though, I much preferred a marinated tri-tip I did, so used a very similar marinade here to inject some extra savory character into the meat by way of ingredients like Worcestershire sauce, Dijon mustard, and lemon juice. 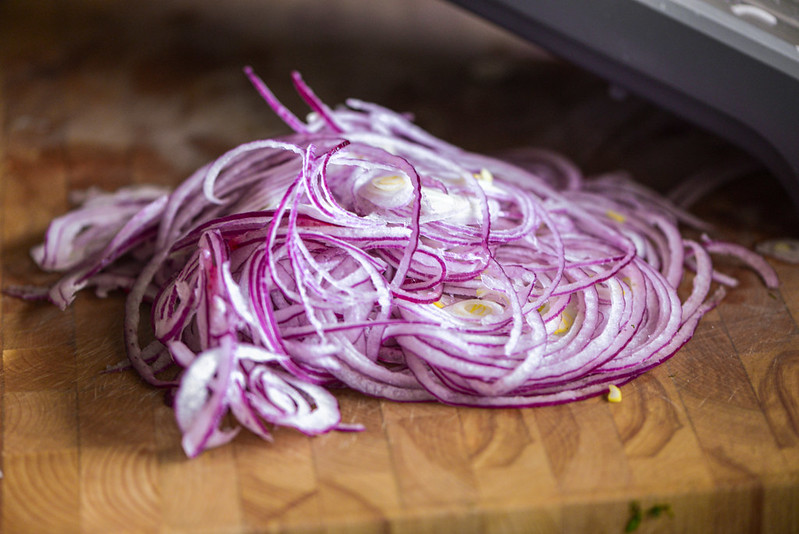 I allowed the tri-tip to marinate for four hours, but you can go as long as eight and be fine. Marinade times are usually great periods to work on other components of a recipe, and since the end product was going to be a sandwich, I had a few additional things to work on here. First of those was pickled red onions, which are super quick to put together, especially if you have a madonline so you can make the required thin cuts of red onion in no time. Once the onion is sliced up, you merely shove it all into a glass jar, heat up some vinegar, salt, and sugar together, then pour the brine into the jar. Doing this on the early side is best because the onions take a couple hours to fully pickle. 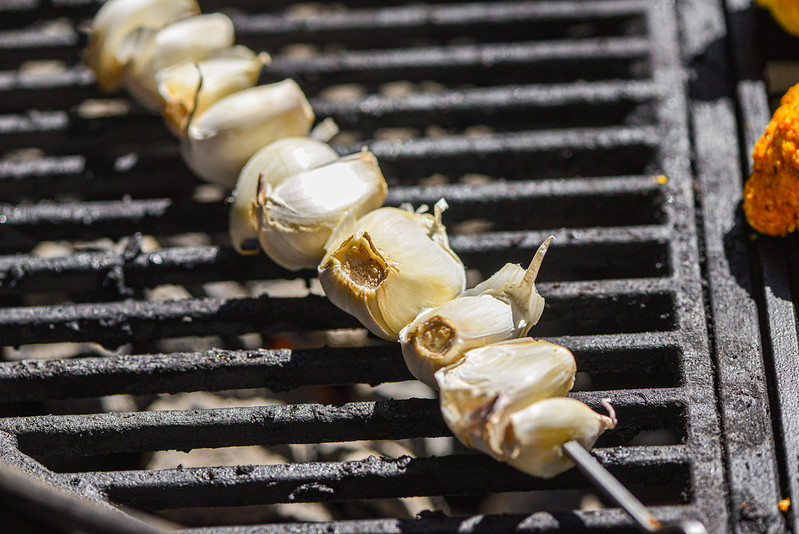 I had a thought that this sandwich would be especially good on garlic bread, and while I had the grill going, why not take the opportunity to grill that garlic! I wanted the cloves to cook quickly so I had enough heat leftover to cook the beef and make the sandwiches, so I separated the cloves and thread them onto a skewer. Once I had the fire going, it only took about five minutes over the high heat for the garlic to blacken on the outside and soften on the inside. 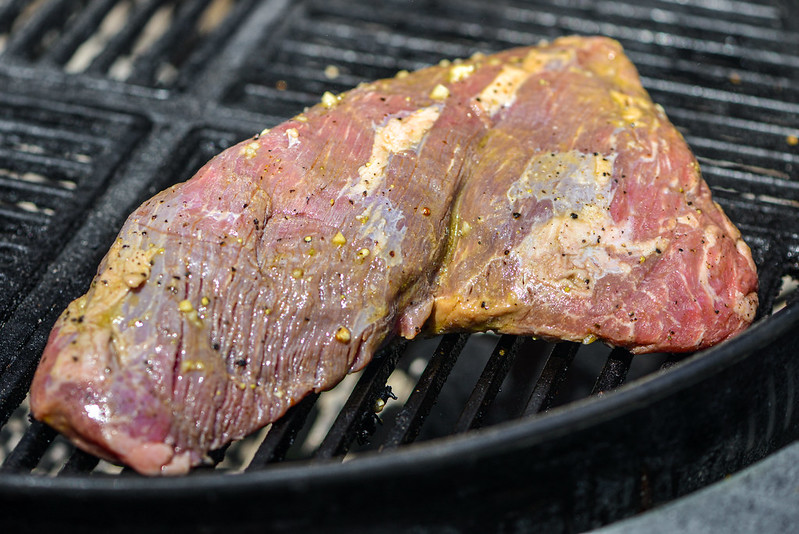 Once done, I removed the garlic and put the tri-tip on the grill over indirect heat. Since there's little fat in the cut, it cooks faster than you may expect for its size. You should certainly have at least 20 minutes to turn your attention to other things, but don't leave the grill side too long or you may risk overcooking. 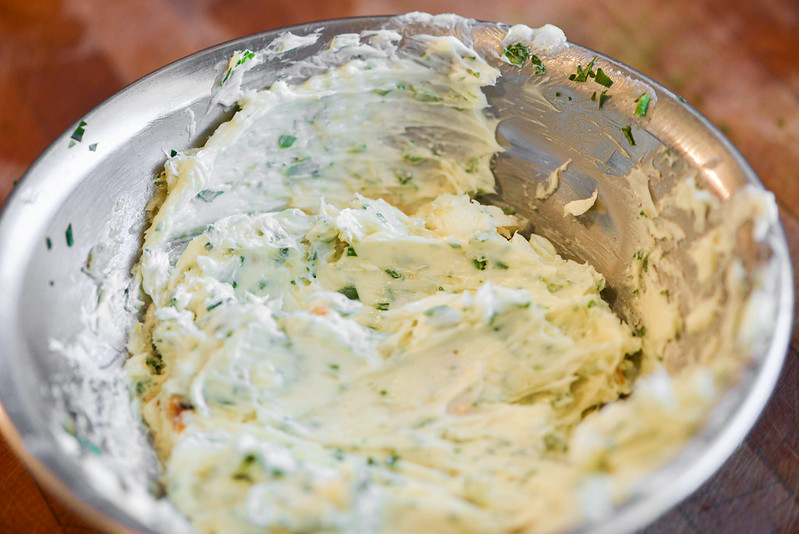 While the tri-tip cooked is when I made the garlic butter by first peeling the roasted cloves, then mashing them into a paste in a small bowl. I then added in room temperature butter and some parsley and continued to mash until everything was well combined. I then spread on a generous layer of the garlic butter onto the crusty bread I had picked up. I used a batard here, which my local bakery makes almost the length of a baguette, but a bit wider. Batards are not all a common shape and length, so you may need to adjust the recipe or bread choice depending on what you can find—the main characteristics I wanted was crusty exterior with a soft and slightly chewy interior. 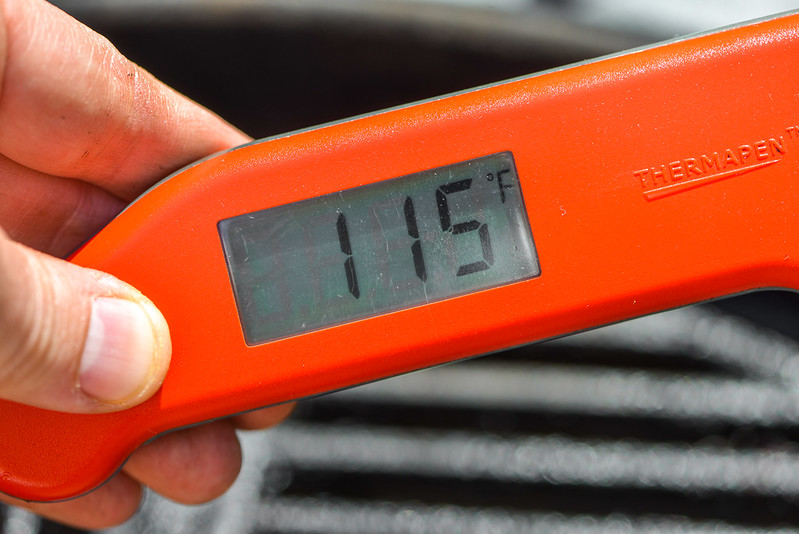 Tri-tip will be at its best in the medium-rare to medium range, where a nice rosy interior preserves both flavor and tenderness. Since the beef still needed to be seared and would gain some temperature during that process, I was looking for an internal temperature about ten degrees below my final target of 125°F. 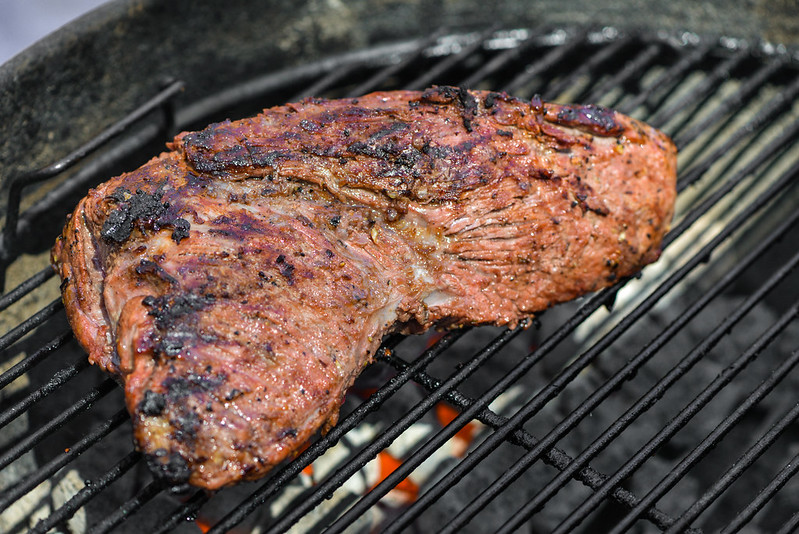 Once it got there, I moved the tri-tip over to direct heat, which was now churning out about a medium-high heat since the coals had been going for around 30 minutes already. This meant it took a bit longer to sear the beef all over, but since the exterior was already dried out from the initial cook, this still happened effectively without the need of a scorching fire. 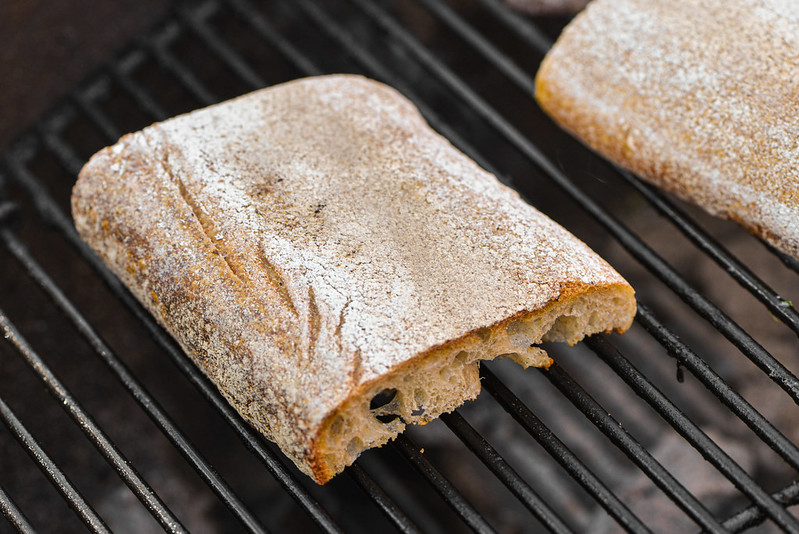 Once the beef had a crusty sear all over, I transferred it to a cutting board and placed the buttered bread on the hot side of the grill, cut side down. The more gentle heat meant the butter melted and bread lightly browned nicely without any burning. I often have to be more cautious with bread because a hotter fire can char it so fast it can be go from perfect to almost inedible before I sometimes even notice. 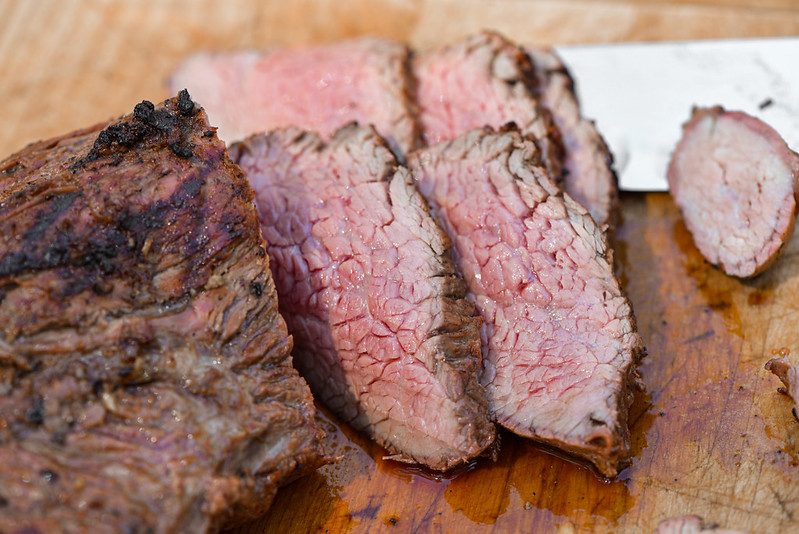 With the bread all nicely toasted, I made the first slices into the tri-tip. I was so happy to be greeted by the rosy red interior I was after, and sneaking a piece of the beef confirmed this was as delicious as I remembered the last marinated tri-tip was. As I cut slices of the meat, I piled them into in the bread, then topped the beef with pickled red onions and a slice of provolone. 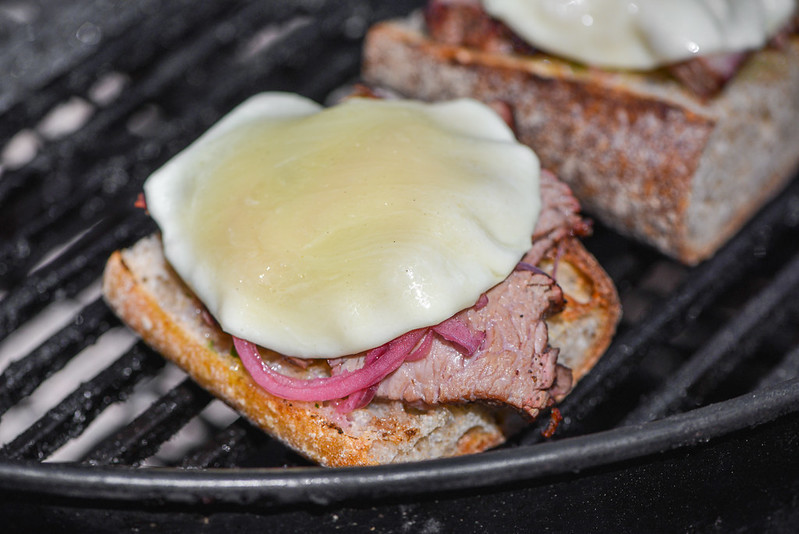 Then back on the grill those bottom halves of the sandwiches went, where I let them sit, covered, over the indirect medium heat, just long enough for the cheese to melt. The more gentle heat here was pretty key because it helped prevent the meat from cooking much more, as well as kept the bread becoming overly dry since it had already been grilled once. 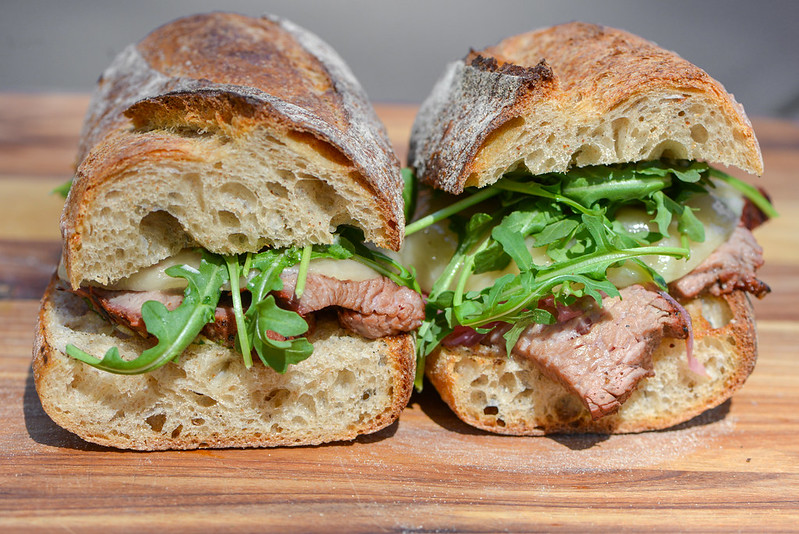 To finish the sandwiches up, I merely added a small handful of arugula on each and spread some mayo on the remaining halves of the bread before adorning them on top. Since my last tri-tip recipe I did in 2015, I did get to try out some tri-tip sandwiches in their native Californian habitat, so I had some points of comparison, although I didn't devise these sandwiches in the same image of the more minimal specimens I encountered out West. Even so, first and foremost, that wonderful tender and flavorful beef was centered in the sandwich as it should have been. The garlic bread direction was a good choice as it paired well with this particular cut, while roasting the garlic took the edge off enough that it didn't compete to much. The sandwich was not overly fatty or too rich, so the onions provided more of a crunch and tang over balancing out heaviness as they sometimes too, while the cheese and mayo added good creaminess and moisture and the arugula lent a nice peppery kick. I was fully taken by these sandwiches, and I had a nice bonus of just a little leftover meat at the end, which I chilled and enjoyed as cold roast beef the next day. 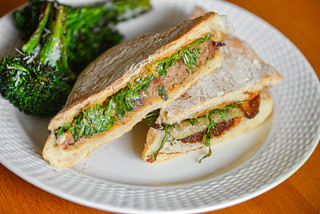 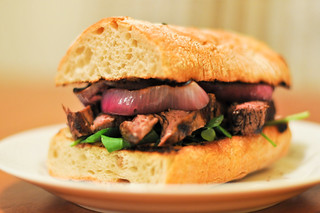