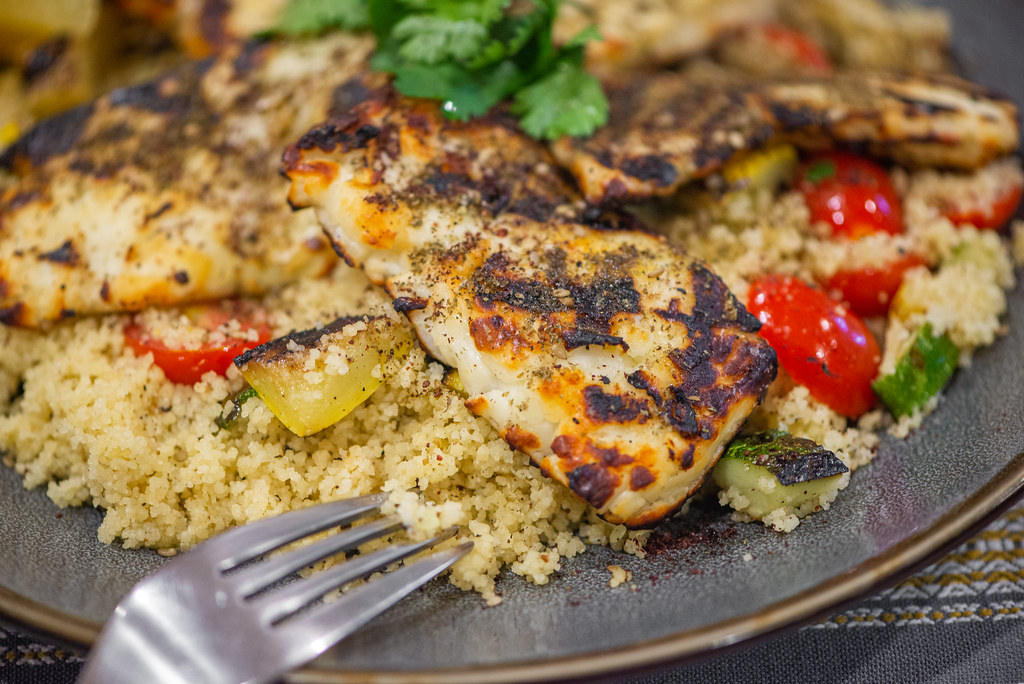 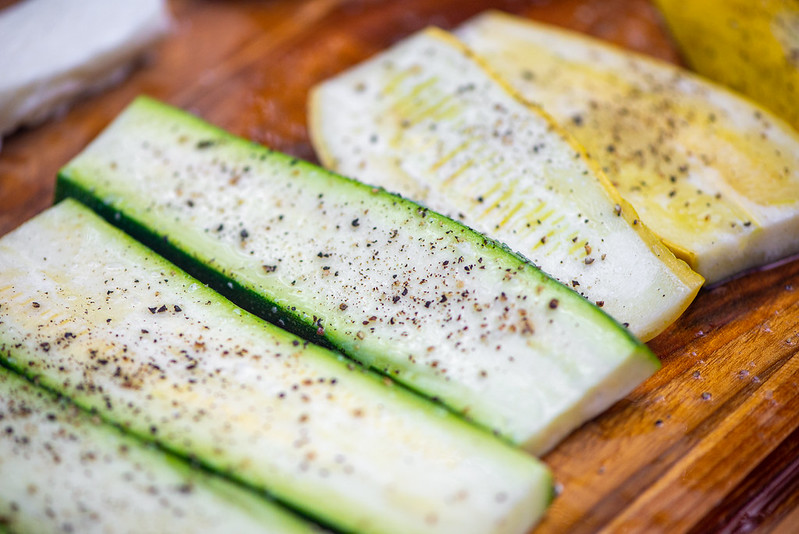 I kinda of threw this meal together very haphazardly, using things I had in the house and trying to minimize grilling and overall prep time for a quick weeknight meal. I personally could eat grilled halloumi alone and call it dinner, but that's not really a meal, so decided to serve it on a bed of vegetable-laden couscous. 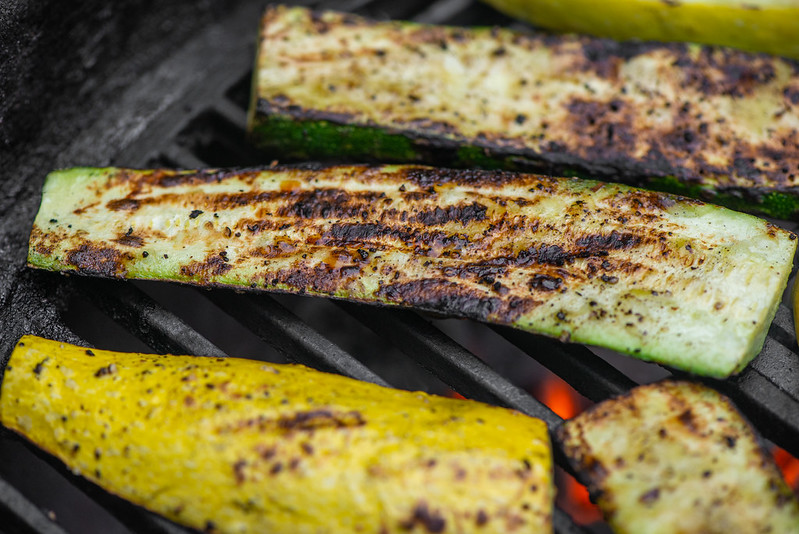 Summer squash are some of my favorite grilled veggies, so it was my default go-to to here. I used both zucchini and yellow squash sliced into quarter inch strips and brushed with olive oil and seasoned with salt and pepper. These grilled up to a very attractive deep brown in a few minutes per side, and once they were done, I removed them from the grill and cut them into a medium dice. 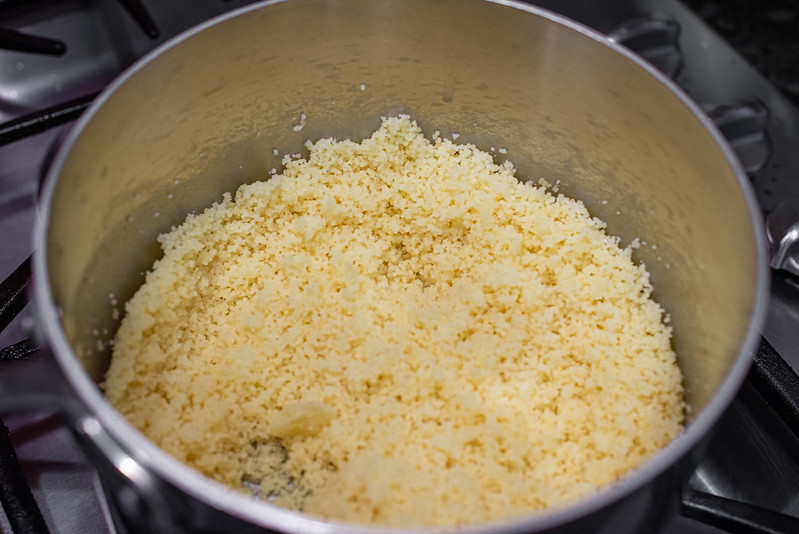 I then moved into the kitchen to quickly make the couscous, which just required me to boil some stock with a bit of butter and oil, then stir in the couscous, and let it rest off the heat for five minutes. I then fluffed it up with a fork and tossed in the squash and fresh halved grape tomatoes. The couscous needed a little boost of flavor, so I added in lemon juice, salt, and pepper. It was only after I was finished with this that I realized I probably could have done this all on the grill, so feel free to keep utilizing your hot outdoor fire instead of running back and forth like I did. 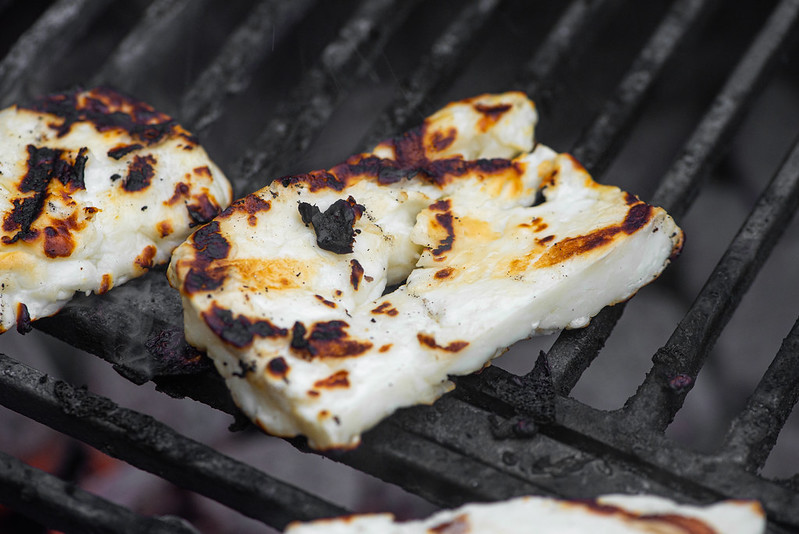 Next it was back to the grill to cook up the halloumi. This cheese is at its peak right after it's finished grilling, so it's definitely the last thing you want to do in putting together this meal. Just like fish, halloumi needs to cook until it's well browned to be able to flip it without any sticking. Depending on the heat of your fire, this can take anywhere from two to four minutes, so be patient and test before flipping—if it's not giving and clinging to the grates, just wait a little longer and then try again. 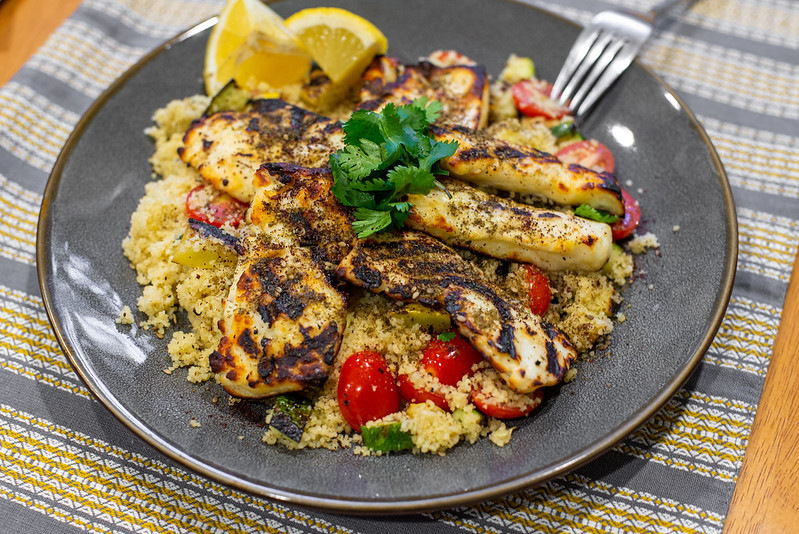 One the halloumi was done I spread a bed of the couscous on a plate and placed the hot cheese slices on top. I then sprinkled the halloumi with za'atar and gave it a drizzle with olive oil and dug in. I won't lie and say this is the most mind blowing meal you'll ever have, but for a quick weeknight dinner, it definitely impressed. I mean, it's hard not to impress when you have some grilled salty and squeaky halloumi going, but the herbal and toasted flavor of the za'atar really paired well with the cheese, and couscous provided a heartiness along with some contrasting sweetness from the squash and tomatoes that made everything work quite well together. My real excitement in the end was that I now have an affordable source of one of the greatest cheeses on Earth, which makes tossing together an experimental, last-minute meal like this with halloumi something I can bring back into my life.