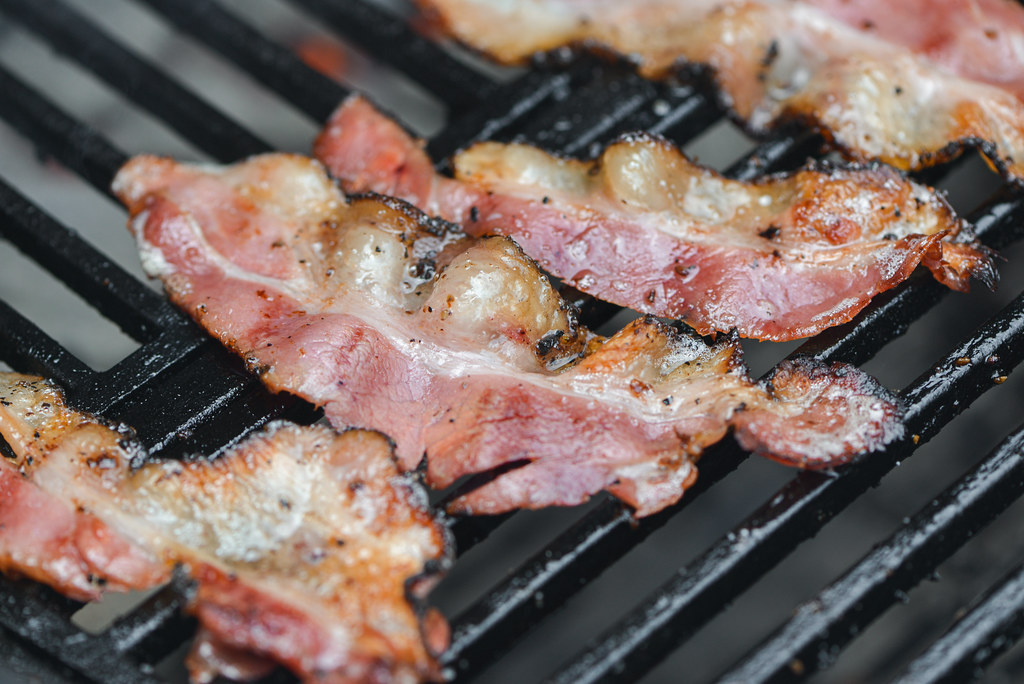 A while back, a friend of mine gifted me the bacon of the month club, and my initial reaction was more tepid than you might expect for someone who runs a site called "The Meatwave." For one, I'm not a huge fan of those mail order clubs, and also I've kind of shied away from becoming another voice in a bacon-everything chorus that needs no additional proselytizer. As each month passed though, I found myself anticipating the next bacon delivery more and more. All the bacons were so unique and delicious, it was may more of a thrill getting a new package of cured pork belly constantly than I had initially expected. To this day, one particular bacon that stood out for me was a peppered variation, which added a sharp bite to the already smoky and salty profile to turned things up to eleven. So when I finally decided to make my very first homemade bacon a couple months ago, a peppered bacon was my go-to. 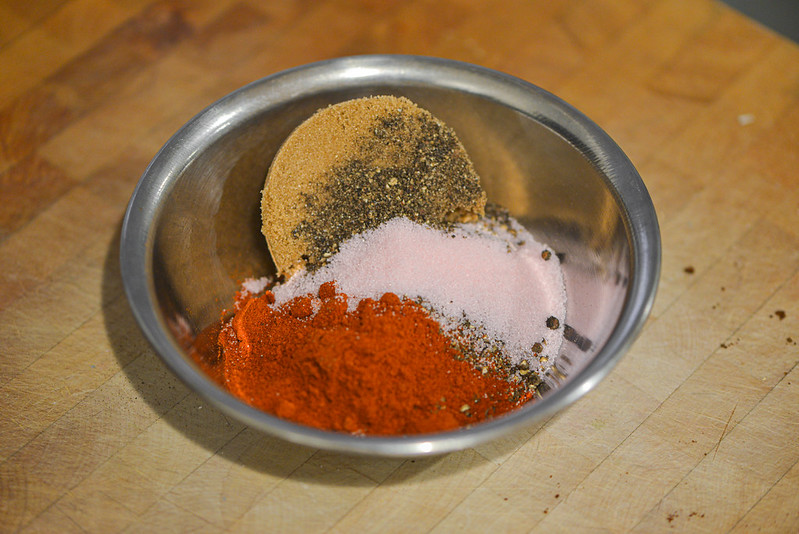 I'm a bacon-making newbie, so I'm sure there's a lot I have to learn about the process and fine tuning my recipes. I am, however, somewhat well versed in curing meats, and more often than not, I've utilized dry cures to great success. So dry cure it was for my first bacon, and on top of the required Kosher and pink curing salts, I added dark brown sugar and paprika to the cure. The sugar I hoped would add a sweetness to contrast with the salt and pepper, but after making the cure, I wasn't sure exactly what the paprika would do, although it certainly didn't hurt it in the end. 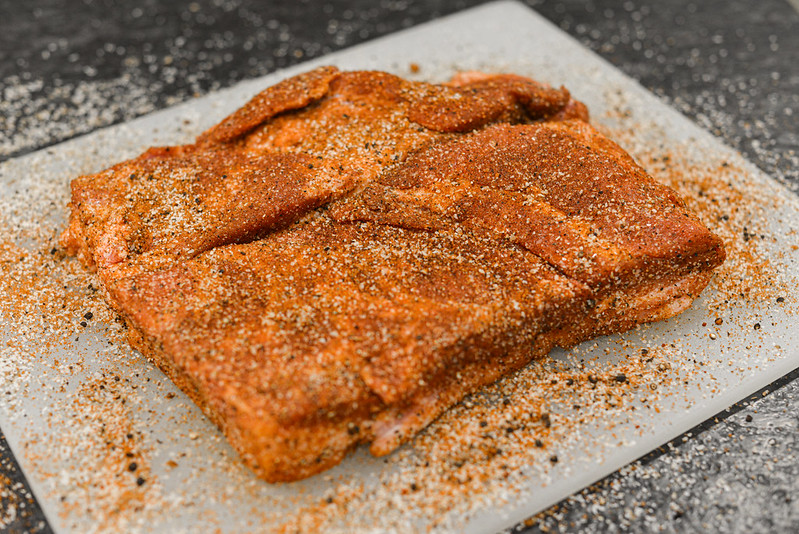 I picked up a couple pieces of boneless pork belly from my local Asian market and removed the skin, making that into chicharrones over the new couple days. I then coated the belly liberally in the cure so there was no spot that was not encrusted in the sugar and salt mixture. 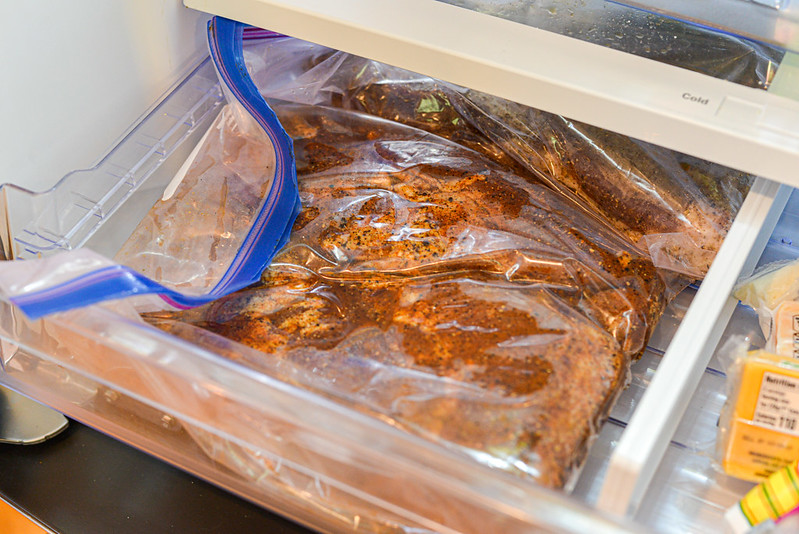 Then came the hardest part—wait. I put the belly into a large Ziploc bag and placed it in the fridge. I then let the pork cure for five long days, during which time my only interaction with it was flipping the bag each morning and evening to help ensure the meat was curing evenly throughout. 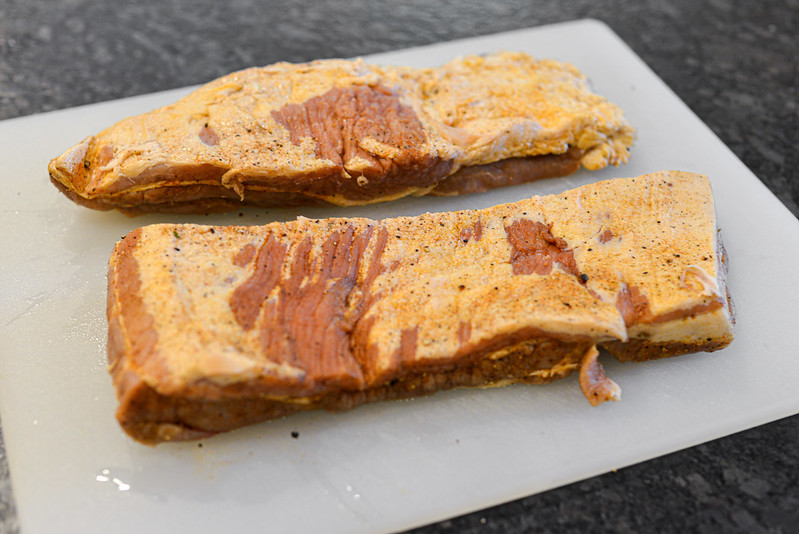 Finally, smoking day arrived! Before heading outdoors, I soaked the belly in water for a couple hours, which is a step I've always used with my pastrami to remove some of the excess salt from the meat to make it palatable in the end. This may have been my major flaw in the recipe because two hours of soaking, with changing the water every 30 minutes, rendered the meat not salty enough, although that was easily fixed with a salt sprinkle during frying. To help avoid your bacon from being under seasoned, I reduced the soaking time from two hours to 30 minutes, but that comes with a word of caution that length hasn't been fully tested. 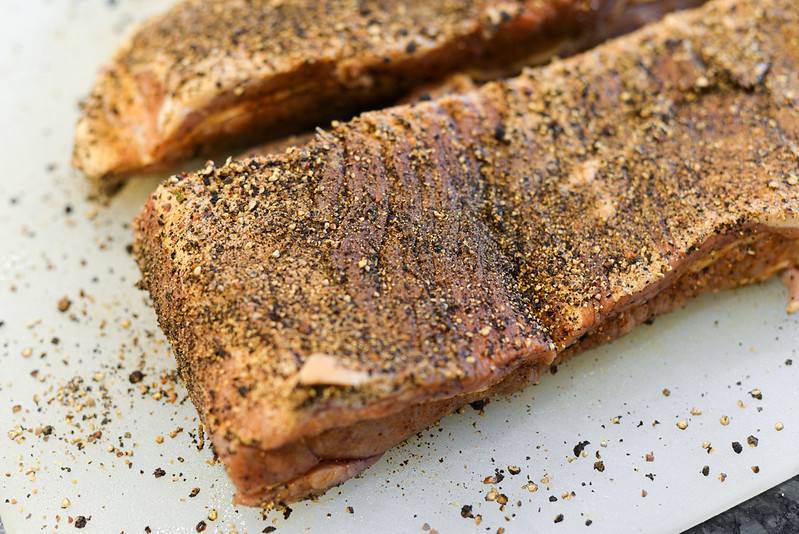 After soaking the pork and patting it dry with paper towels, I applied the coarsely ground black pepper for the pepper crust. For the most potent pepper with the right coarse grind, I highly recommend using whole peppercorns and grinding right at the time of use—the pre-ground pepper you get from the spice aisle is not what you're looking to use here. 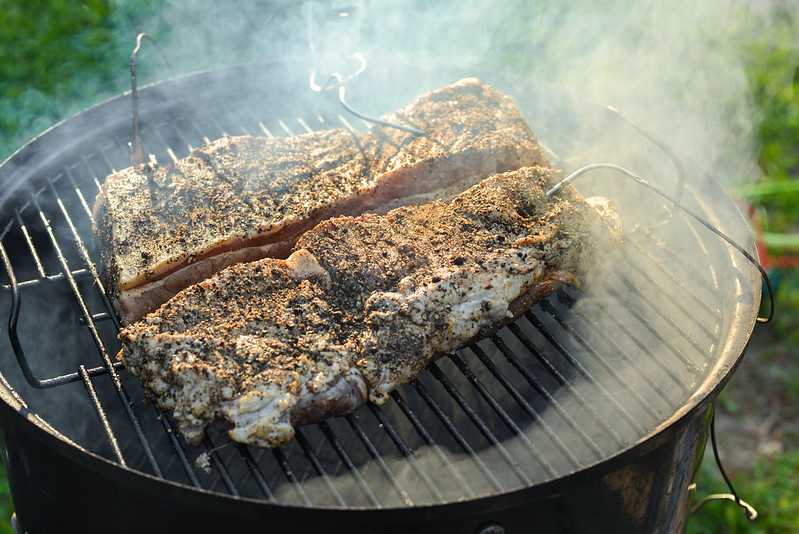 Besides not wanting to jump on a bacon bandwagon, the other reason I think I've waited so long to make bacon at home is because I thought it required cold smoking, which I'm not well outfitted to do. That perception stuck with me for a very long time until recently when looking up bacon recipes and realizing hot smoking is a pretty common cooking method with well documented positive results. I did try to run my smoker a little cooler than usual—at 200°F—but I was trying out a new charcoal type that stubbornly wouldn't get below 275°F. 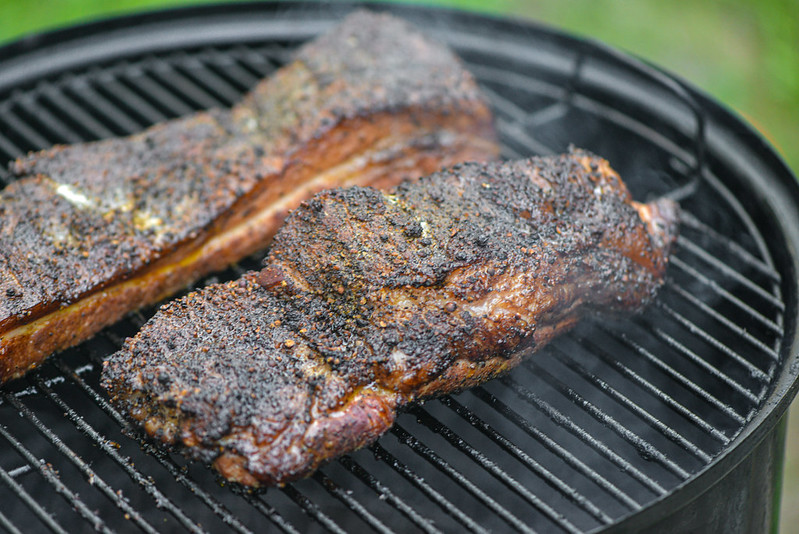 I proceeded anyway at the higher temperature, but fretted my bacon wouldn't become properly imbedded with smoke, even knowing that smoke absorption really only happens in the first few hours of cooking. It only took two hours for each piece of pork belly to reach my target internal temperature of 150°F, at which time I pulled it out of the smoker and started another period of waiting. 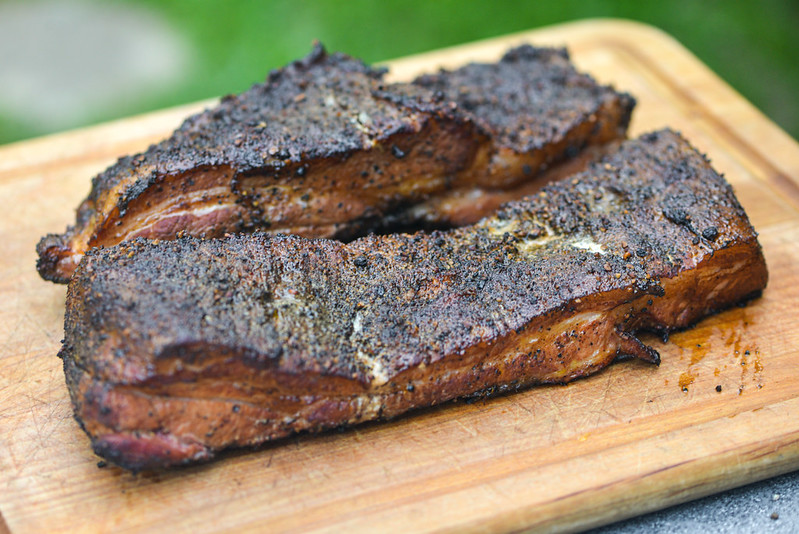 Luckily, this one was much shorter than the five day curing time. First I just needed to wait for the pork to cool enough to put it in the fridge, so after about an hour or two of sitting outside of the smoker, I wrapped it in plastic wrap and then placed it in the refrigerator to finish cooling completely—a fully chilled piece of meat is going to be much easier to slice. 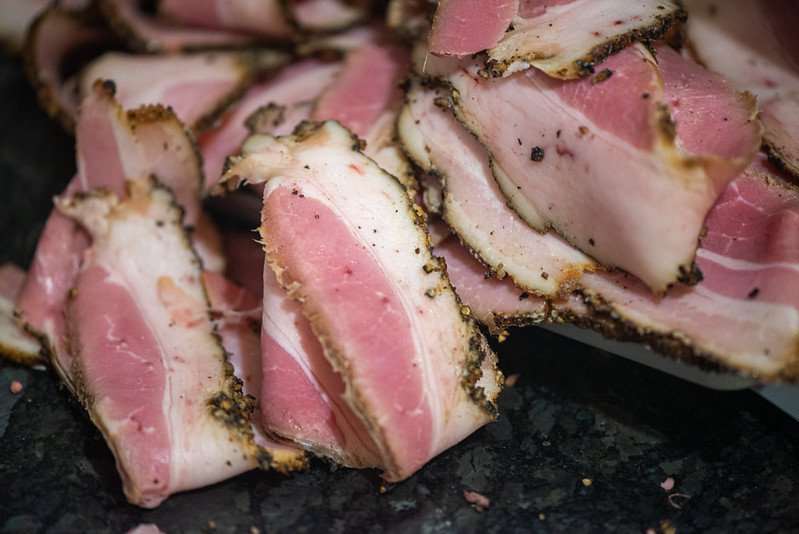 Another thing that stopped me from bacon production in the past is the lack of a meat slice. Sure, I could have hand sliced, but I'm notoriously bad at that and I prefer the normal bacon slice size over thick cut, which would be harder to accomplish by hand. I added a meat slicer to my kitchen arsenal about a year and half ago, and it's proven to be incredibly handy, and I can now add bacon slicing to the growing list of things I'm enjoying to be able to easily and consistently slice at home. 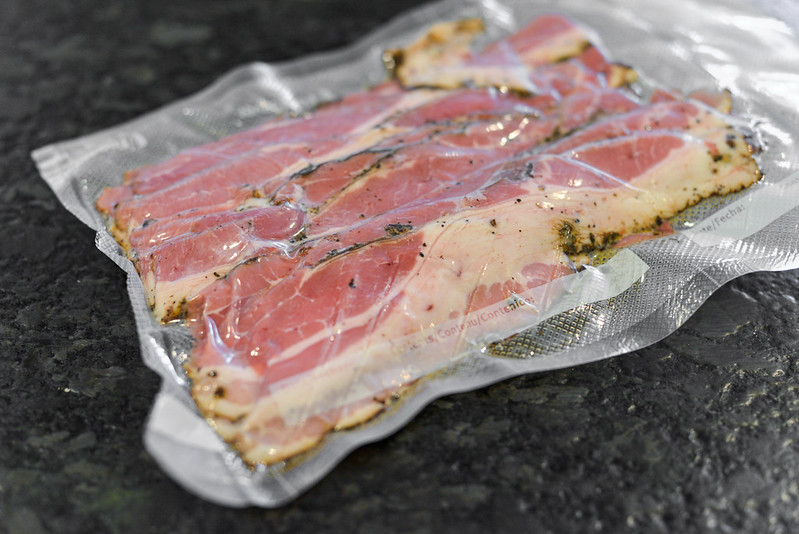 I now had about four pounds of sliced bacon, which I was super excited about, but knew it would take me months to finish it all. So I used my vacuum sealer to bag my bacon into manageable portions, making five bags to eat my way through over the new few months. 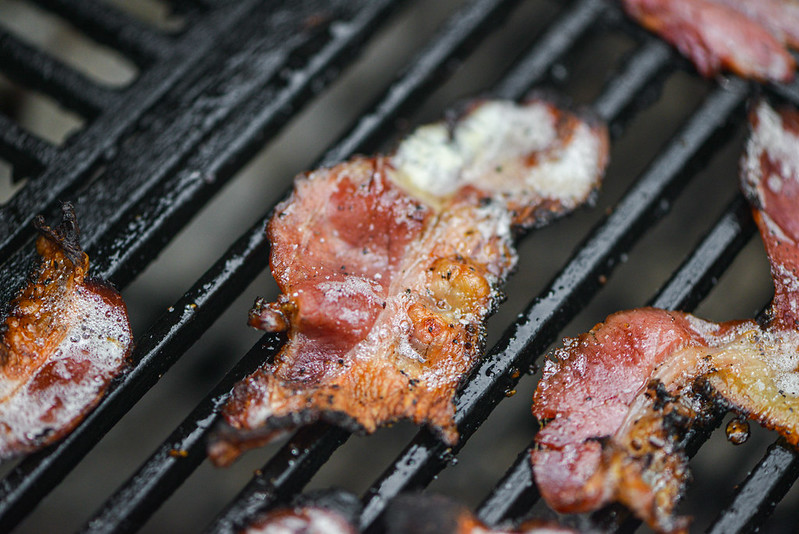 From here, you can cook up the bacon using your favorite method. I'm usually a pan-fry type of guy, but there really is nothing like the grill to cook up bacon in large batches and avoiding your home smelling like the stuff for days afterward (I personally don't mind a lingering bacon scent in the air, but not everyone in the household is on the same page as me). 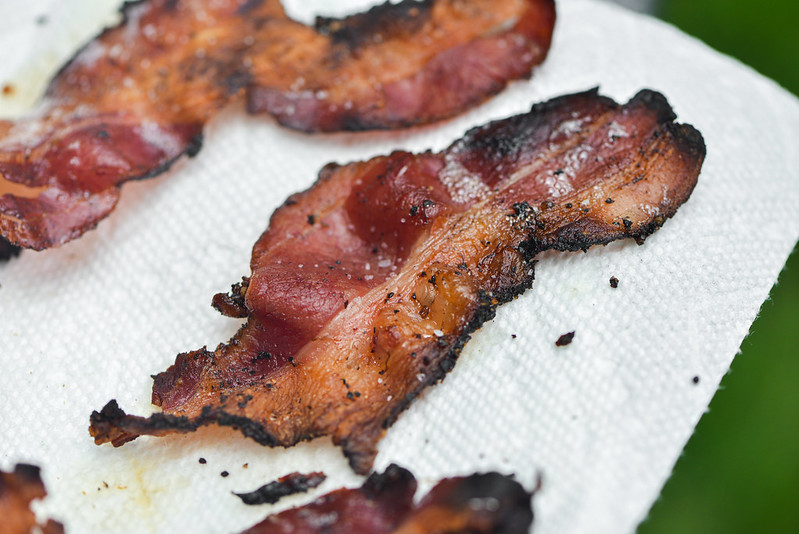 As I mentioned, my bacon turned out a little under seasoned, but a small sprinkling of salt while cooking corrected that perfectly. Otherwise, I thought the flavor and texture was really excellent for a first shot. The meat was way more complex than the standard bacon I'm used to pulling off the grocery store shelf—it had the required smokiness but also an enhanced meatiness and slight sweetness too. The best part for me was the peppered crust, which was crispy with and intense bite that makes me wonder why this isn't way more common. I came out the other side of my preliminary bacon making adventure with something that made me all the more eager to try more recipes and keep the bacon flowing—it'll be kind of like that bacon of the month club, just even more satisfying that I made each batch myself.