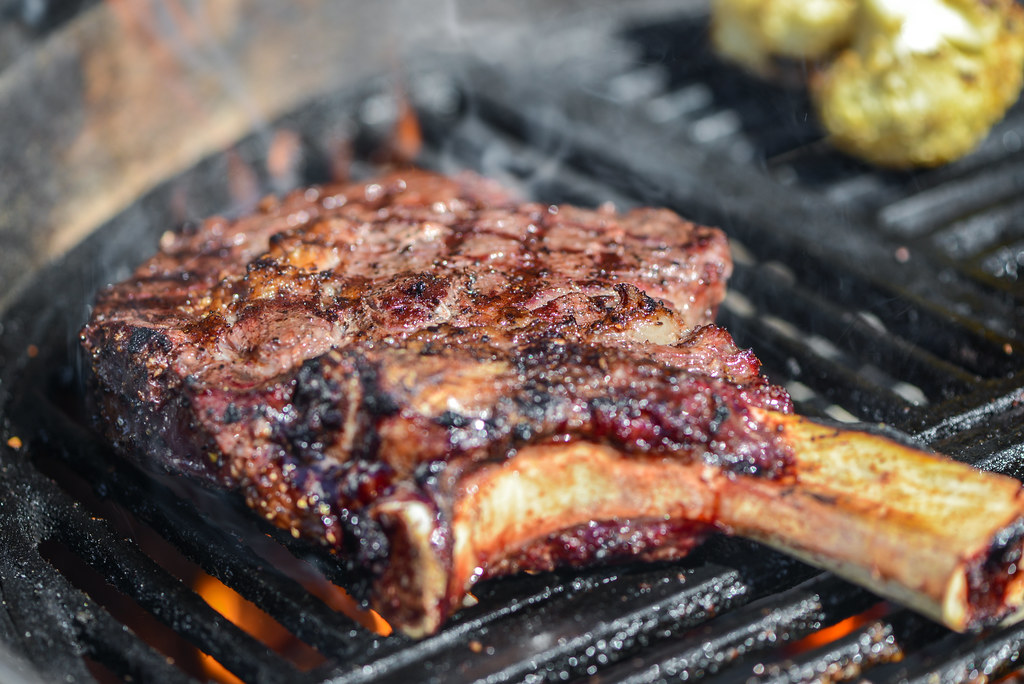 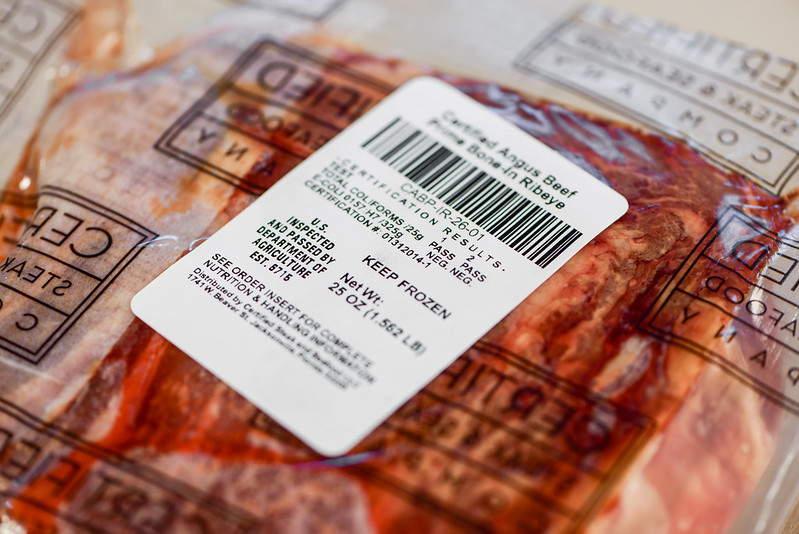 Like those strip steaks, this ribeye came courtesy of Certified Steak and Seafood Company, with whom I'm trading my photography skills for meat—nothing wrong with getting paid in beef! I'm always a bit wary of meat I can't pick out myself, but so far Certified Steak has impressed me cuts that have had top notch marbling and ideal portioning for grilling. 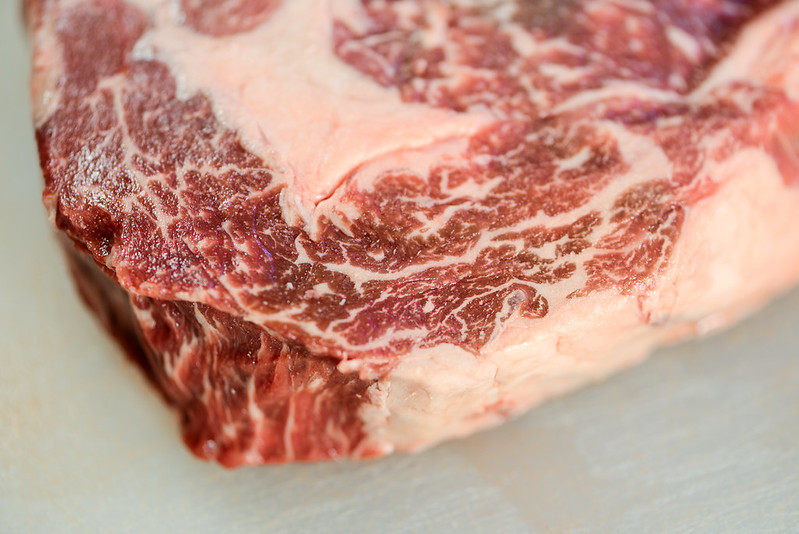 On marbling, the ribeye comes with the best parts of the steer—the ribeye cap. This area around the edge of the ribeye has incredible intramuscular fat that makes it one of the most flavorful pieces of beef. If you can find a ribeye cap sold as a steak by itself, do yourself a favor and forget price and just get it. I've been lucky enough to have a few ribeye cap steaks in the past and all were some of the finest pieces of meat I've ever had. 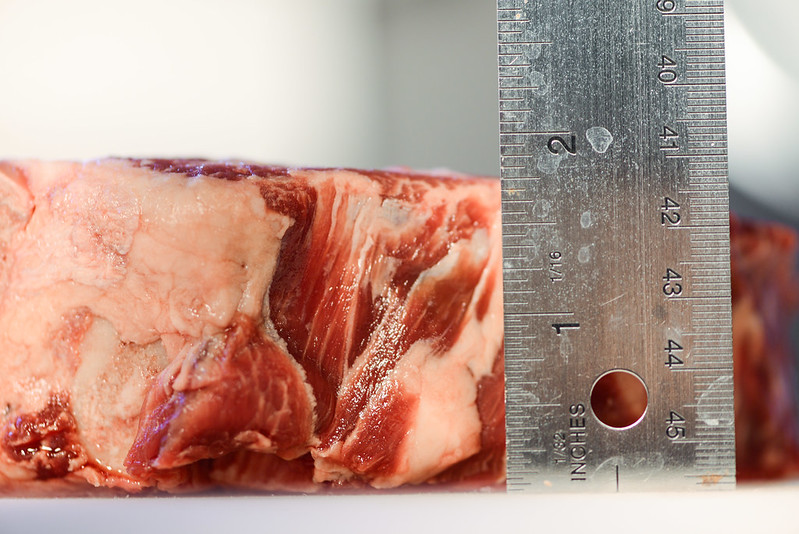 On portioning, when grilling steak, you want to go thick. One-and-half to two inches is an ideal height for a cut—this thickness range is one factor that lets you achieve a medium-rare inside while also obtaining and thick, crusty sear. Thinner steaks just cook too fast, meaning you're likely going to need to sacrifice either doneness or the sear, a difficult choice I'd try to avoid. 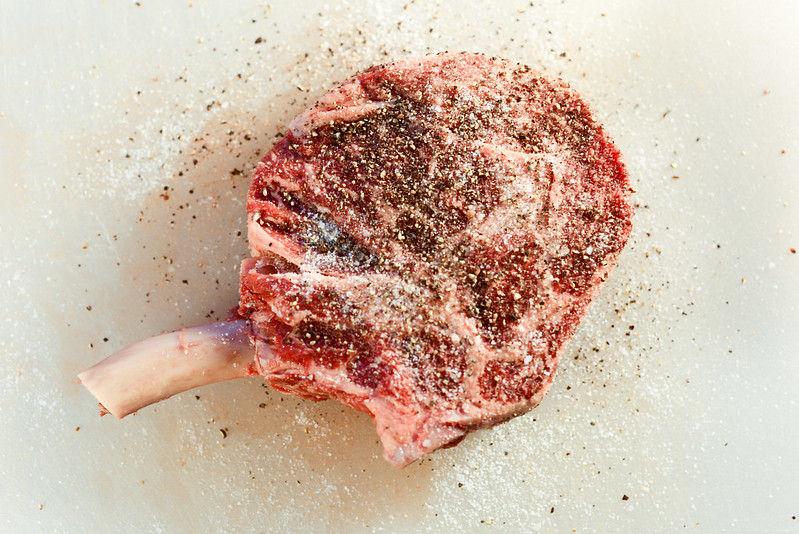 The ribeye's immense amount of fat translates to maximum beefiness—a trait I wanted to let shine and not mask at all. So I went minimal with my preparation and only gave the steak a generous coating of salt and pepper 40 minutes prior to cooking—this duration gives the salt enough time to first draw moisture out of the steak, and then break down the muscle fibers so that the now-concentrated, flavorful liquid that was drawn out can be reabsorbed. 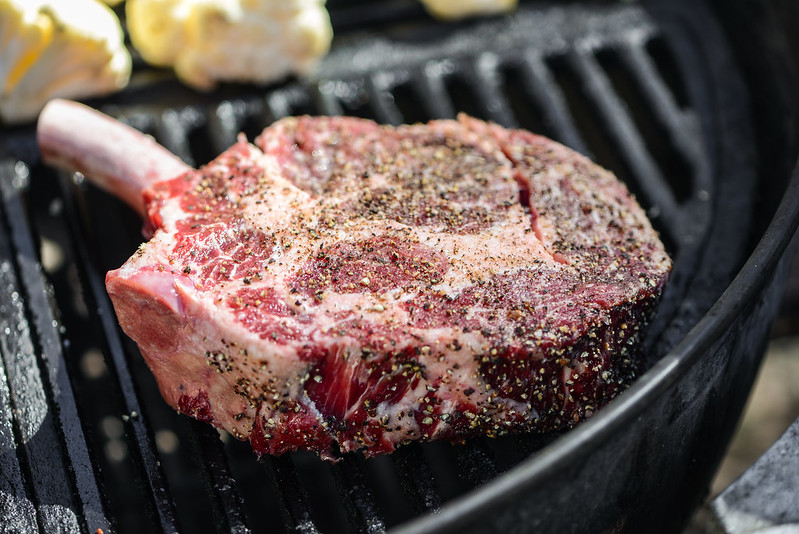 As much as fat and thickness help with getting a stellar final product, there's still no substitute for correct grilling. When looking at the ribeye specifically, I needed to ensure the entire monster cut would cook evenly over indirect heat first. The giant bone acts as an insulator, so that area cooks slower, which led me to position the steak so the bone was facing the fire—where there would be more heat—and the cap was as far away from the coals as possible—where it was coolest and would cook more slowly. 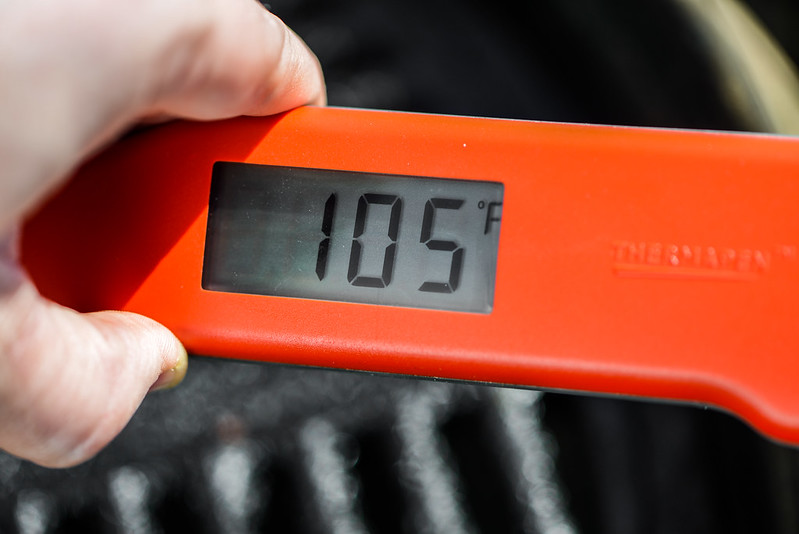 I cooked the steak in that position, flipping it every five minutes or so, until the internal temperature hit 105°F in the center of the steak. This was 15°F shy target 120°F for medium-rare, but that difference would be made up when searing the steak over the blazing hot, direct heat. 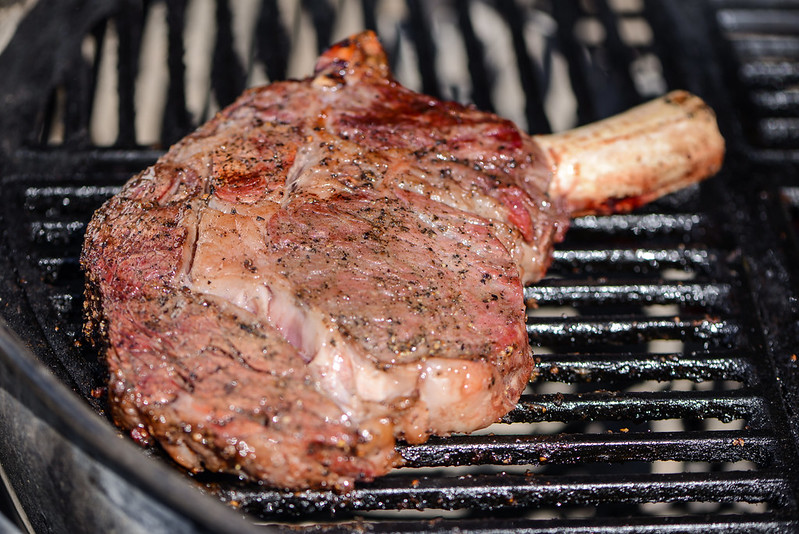 When the ribeye was done with its stint over indirect heat, it looked like this. You'll notice the area closest to the bone was already developing a bit of a sear since it was closer to the fire, while the rest of the steak was pretty pale. An important point of using the reverse sear method like this—when the steak is first roasted, then grilled—is that by now, most of the surface moisture of the steak is gone, allowing it to sear faster and more effectively over direct heat. 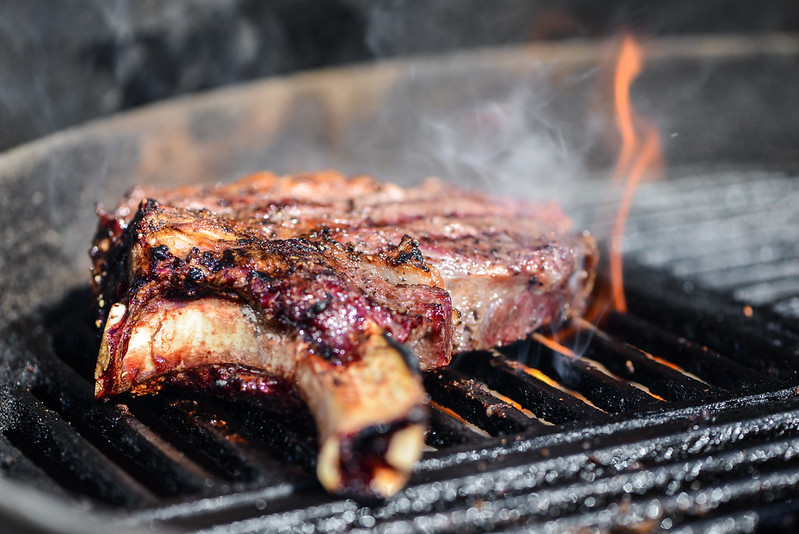 And sear it did! After only 15 seconds or so over direct heat, the ribeye was already looking crusty. For even cooking and the best sear, I flipped the steak about every 15-30 seconds, which also helped control the flare-ups— are inevitable nuisance with such a fat rich cut like the ribeye. 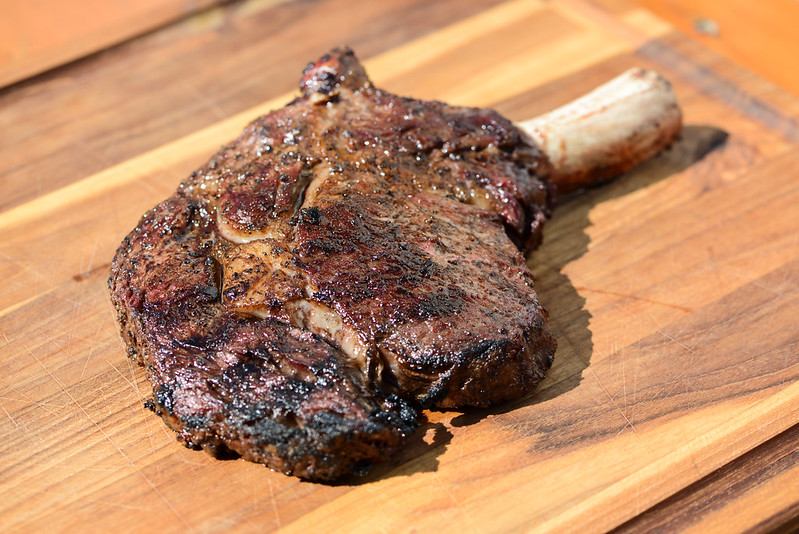 Once I had the thick, deeply browned crust I was after—it took about two minutes of cooking over direct heat—the steak had also reached an internal temperature of 120°F, which rose to its final medium-rare point of 125°F during its 10 minutes rest. 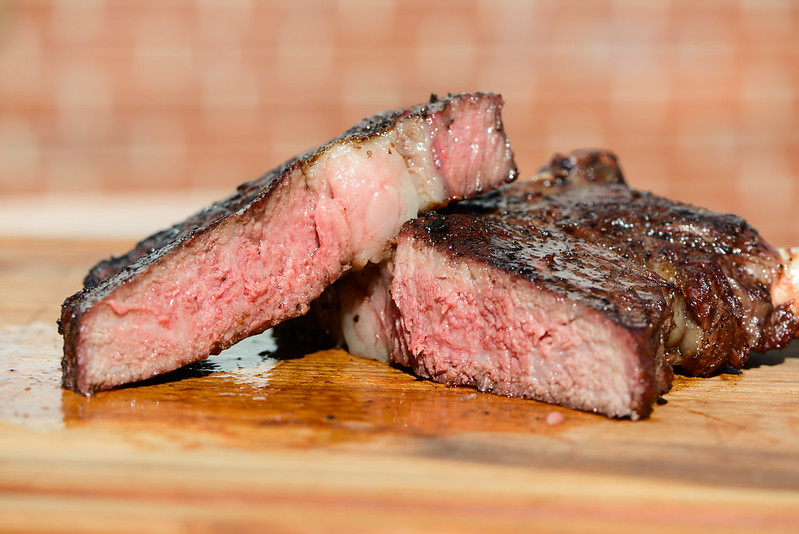 When I cut into this ribeye, I was greeted with a beautifully rosy interior from edge-to-edge with areas of wonderfully soft, luscious fat. This translated to one insanely tasty steak. The ribeye cap was the pinnacle of beefiness, but the rest of the steak wasn't too shabby—every bite I had was superb, even the ones that were all fat, which I personally love. Best of all, that interior was matched by an equally powerful exterior with a well charred, peppery crust. This is exactly what those sous-vide steaks were missing and why I would deem this ribeye to be closer to steak perfection. Luckily, I still have one more of these beautiful ribeyes laying in wait in my freezer, ready for me to try to up ante even more on what's already a winning recipe via the addition of smoke in my next go round, can't wait that! 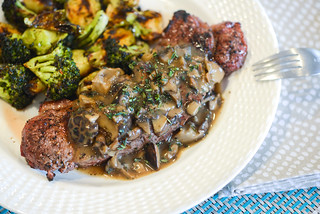