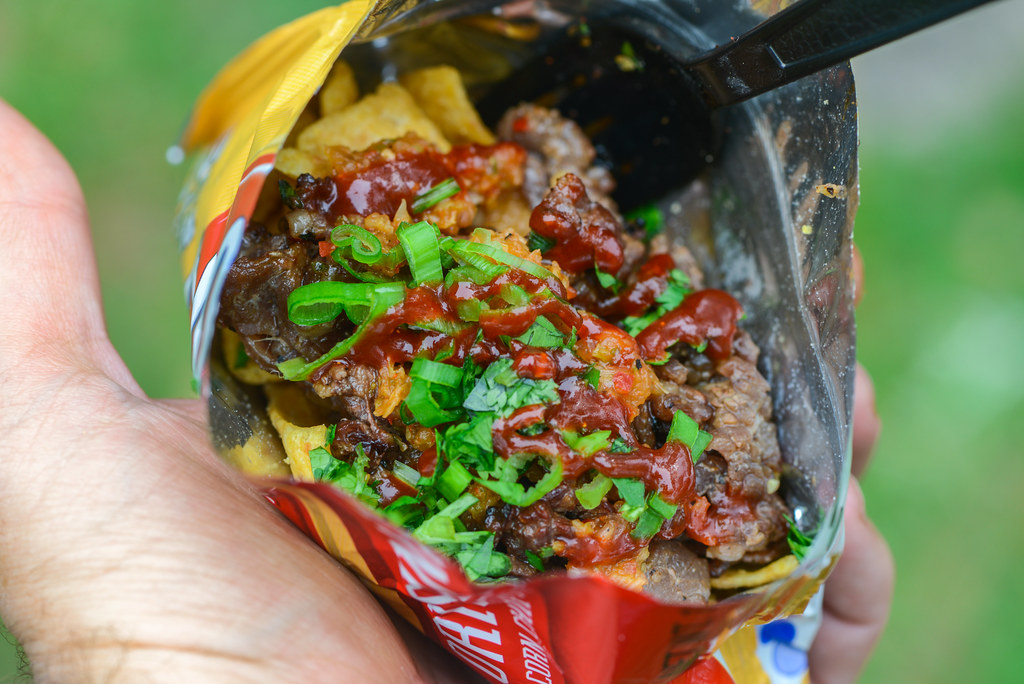 One of our favorite hang out spots in Durham is Namu, a Korean joint with great indoor and outdoor spaces to eat and drink with friends, which I recommend checking out if you're ever in town. Korean barbecue serves as the backbone of their menu, and there doesn't seems to be much they don't turn it into. Their menu covers everything from the traditional, like bibimbap and mandu, to the creative, like tacos, quesadillas, and loaded fries. This got me thinking, if Korean barbecue is so versatile, what else can it do well?

It wasn't a great leap to get from tacos to walking tacos, but I realized I had never seen Korean barbecue topped Fritos ever before and it suddenly became my mission to make it. I made both spicy pork bulgogi, which I've already reported out on, and this beef bulgogi as toppings, and I'm happy to say both worked great in the walking taco format. 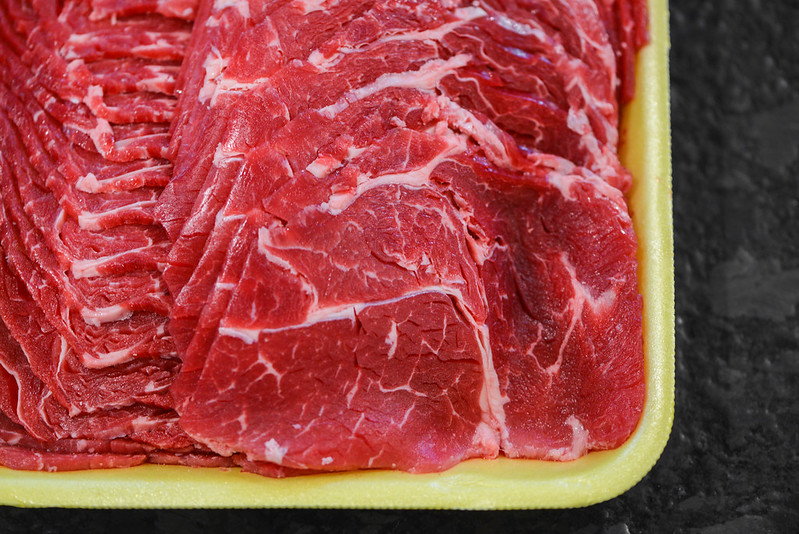 To make the beef bulgogi, I first needed to start with thinly sliced beef. While I've recently acquired a meat slicer that could do the job at home, our local Asian grocery has this beef precut, so it's just easier to pick it up from there. To ensure maximum flavor, I always opt for the fatty slices of ribeye or short ribs that are common. The more marbling of the fat, the better, but that also comes with more cost, so when I was making a very large portion for a cookout this particular day, I did pick-up the less fatty and less pricey, but still delicious, ribeye you see above. 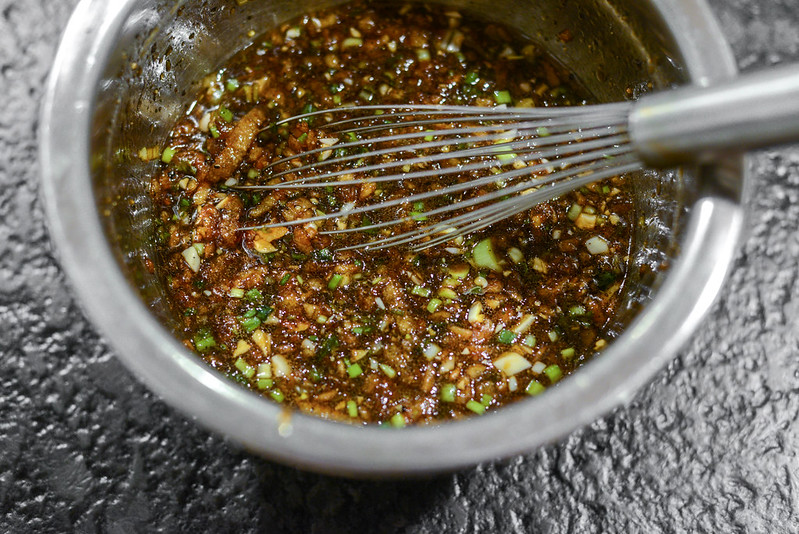 With a very flavorful piece of meat, you need one powerful marinade to really stand out, and that's exactly what we have here. I think what's so great about bulgogi is the marinade really adds a lot of savoriness to the party, while still letting the taste of the beef stand on its own. This is primarily done through heavy usage of soy sauce, which I mixed with sugar, sesame oil, garlic, grated Asian pear, pepper, and scallion. 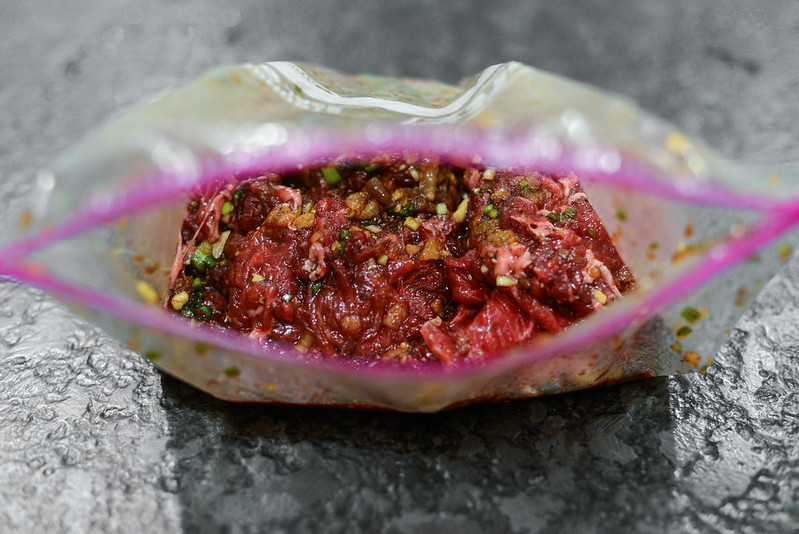 Once I had the marinade done, I married it with the beef in a resealable bag and placed the whole thing in the fridge. While I usually prep in advance and will marinate my meats overnight, I contend that with such thin slices of beef like these, you don't need all that much time for flavor enhancement. I have read though that the Asian pear has meat tenderizing properties, and that may take some time to work, but I personally have not done any side-by-side comparison of marinades with and without Asian pear at different marinading lengths, so don't have any hard facts on if there really is any ascertainable difference to be had. 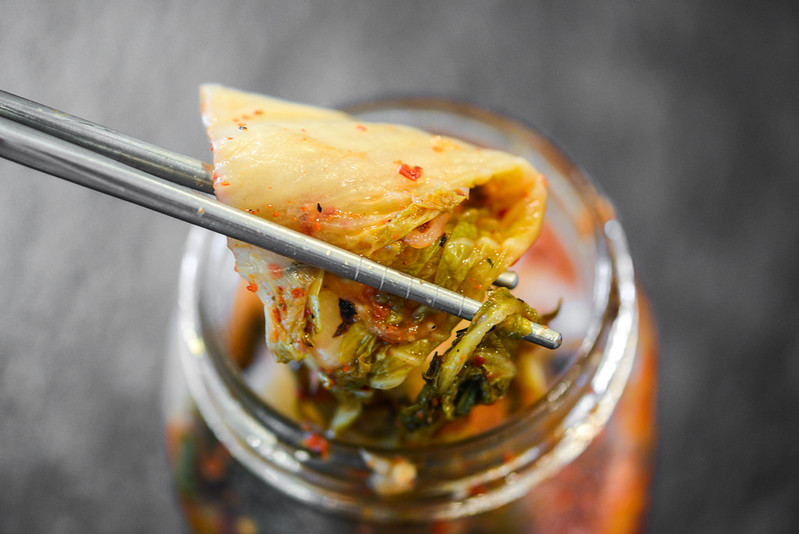 For the other toppings beyond the beef, I didn't go too wild with options. One reason for that was one of my primary toppers, kimchi, could carry a heavy flavoring load all on its own. Most any bottle of this fermented cabbage you pick up at the store will be a complex mixture of sour, sharp, and spicy, which carries a lot of weight as an addition to any dish. This specific kimchi here I made myself using grilled cabbage, and the unplanned extra-long fermentation rendered it more sour than average, so even just a little thrown into the mix was going to pack a big punch. 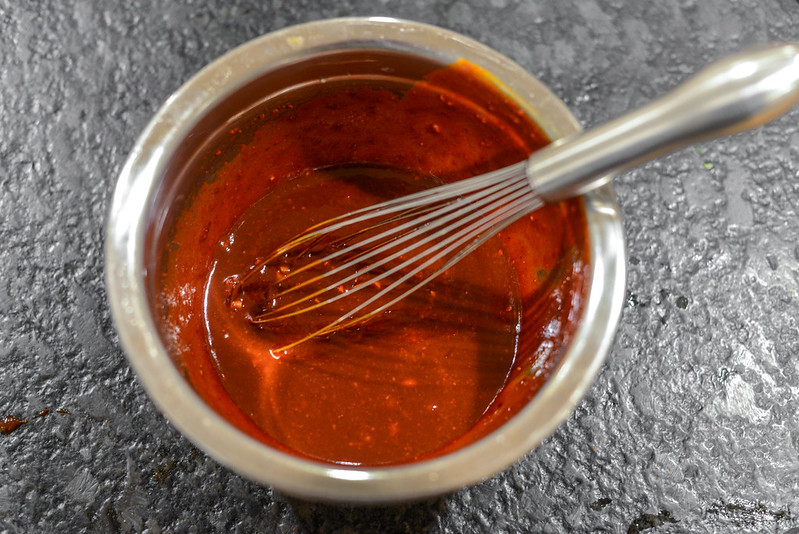 For a sauce, I needed something that could go against both the super flavorful beef and kimchi, and making something spicy using gochujang—a fermented pepper paste—seemed like the right move. I layered even more heat in via Korean chili flakes, then created a little balance to the spiciness by adding in brown sugar and mirin. Soy sauce upped the salty and savoriness, while rice vinegar brought a little tang and garlic a different type of sharp bite from the peppers. This sauce ended up being perfect for a number of dishes I made that day, as well as a baste for grilled rice cakes. 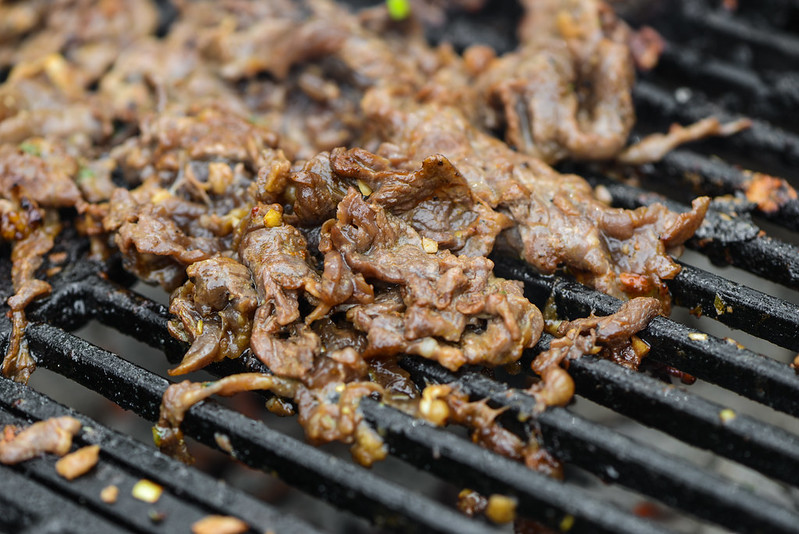 In my earlier grilling years, I actually avoided making Korean barbecue on my grill because I thought the space between the grates was large enough that a lot of meat would end up slipping through. I've since found this to be false. I actually end up putting kind of a mass of stuck together meat on the grill, which holds it together at first and also keeps it from cooking too fast, which can be beneficial when working with such thinly cut beef. As it cooks through and caramelizes, the pieces of meat naturally separate and I just transfer them to a bowl as they finish up. 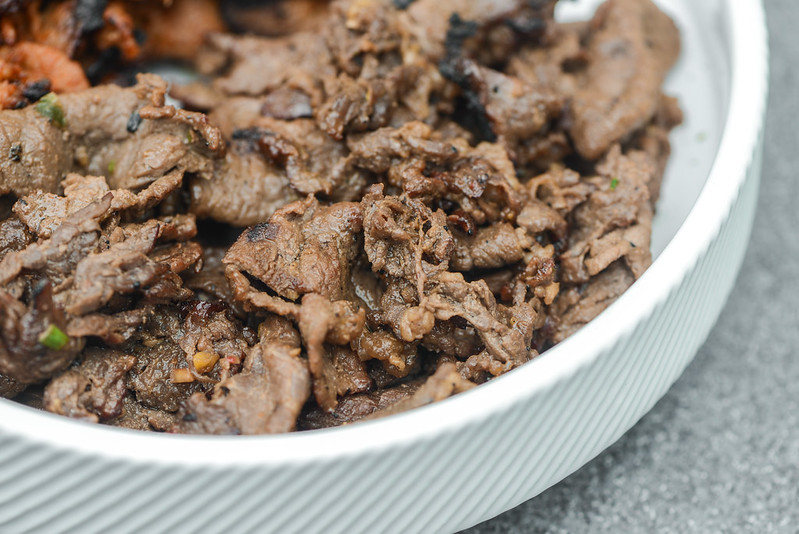 Once all done and piled up, it's hard to not just eat it all right away, but this bulgogi was destined to become even better in the walking tacos, which I assembled by first cutting open bags of Fritos and then topping with the beef, sesame seeds, chopped kimchi, sliced scallions, cilantro, and some of the spicy sauce. 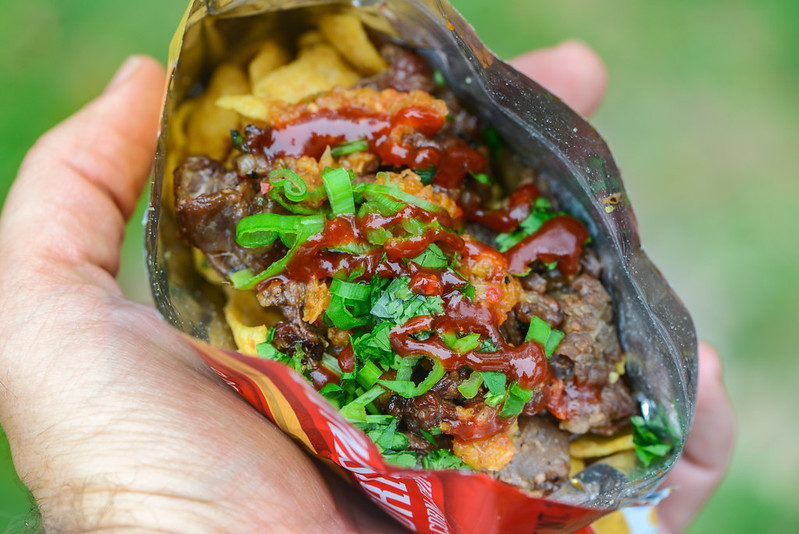 Now that's a fine looking walking taco, and it tastes even better than it looks. While I was personally partial to the double dose of heat the spicy pork offered, the beef represented an enhanced flavor with its intense savoriness and beefiness and had a great balance to its sweetness when matched with the kimchi and spicy sauce. In my opinion, the Fritos were best when lightly crushed and mixed altogether—they provided a salty crunch that was complimentary and not overwhelming. I'm not sure why Korean barbecue is a such a hot thing is so many forms, but not yet as walking tacos. Guess there's a first for everything, and I'm sure once you try it, it'll be something you'll want to share with all your friends and family too. 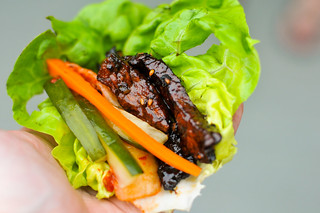