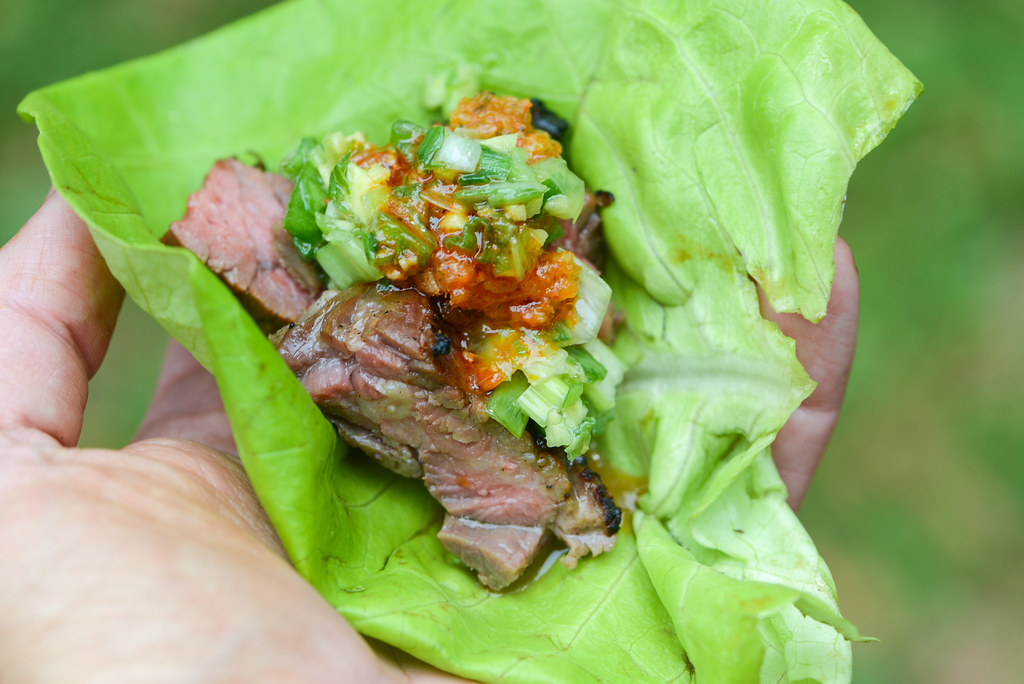 Skirt, flank, and hanger are my personal trifecta of favorite steaks. While I eat skirt and flank fairly regularly due to their easy procurement, hanger tends to be a special occasion type of thing. It's actually been a couple years since I last cooked a hanger, leaving me with an ever increasing desire to grill one up and decided that using Momofuku's hanger steak ssam recipe at my Korean-themed Meatwave would be the perfect occasion to get some of this delicious, beefy steak back into my life. That proved easier said than done as no local shop had any hangers in stock, and I was too late to place a special order. So a bit disappointed, but not defeated, I kept chugging along with the idea, but just swapped the fairly similar skirt steak in place, and really, at the end of the day, when the beef was made into lettuce wraps with a variety of toppings, the difference between skirt and hanger probably would have been pretty indistinguishable. 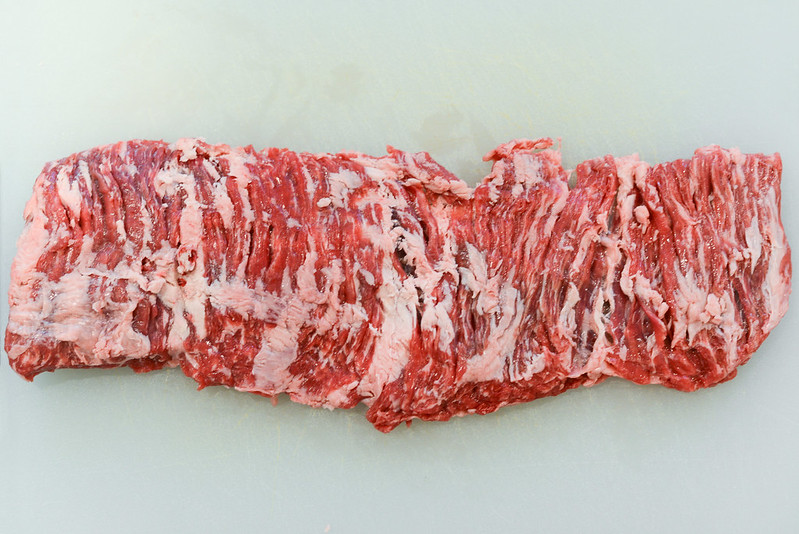 Skirt steak—which is the diaphragm of the steer—is my most cooked, and all time favorite cut. It's immensely beefy, affordable, and readily available (at least in the places I've lived), making it a no brainer as a first choice. Its long and thin shape also makes it uniquely suited for grilling, where a large cooking area and high heat can render it well seared and perfectly medium-rare at the same time. 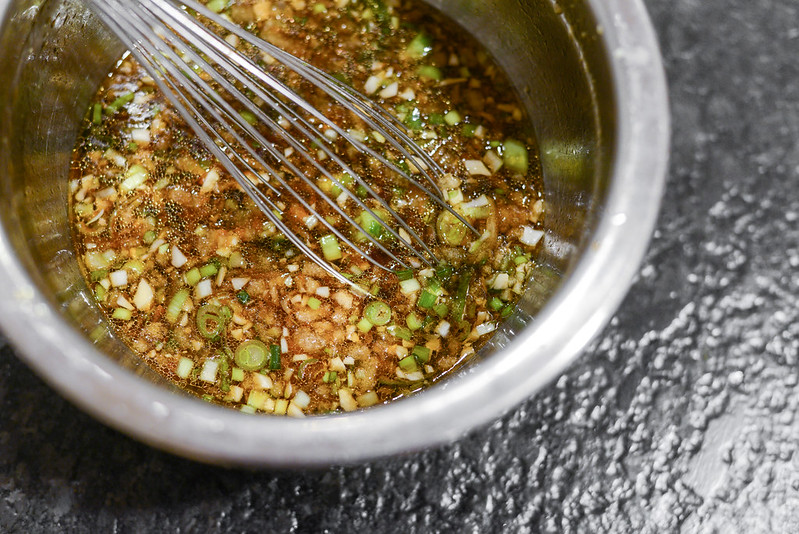 For the marinade here, I mostly stuck with the Momofuku recipe with some minor modifications. The original recipe called for a lot of apple juice, which I personally thought was overkill and would lesson the abilities of the rest of ingredients to impart flavor. So I cut that ingredient back by half and also added in Asian pear, which from experience, has some meat tenderization abilities and adds a very unique sweetness that makes something taste distinctly Korean. The rest of the marinade was comprised of light soy sauce, onion, garlic, sesame oil, and black pepper. 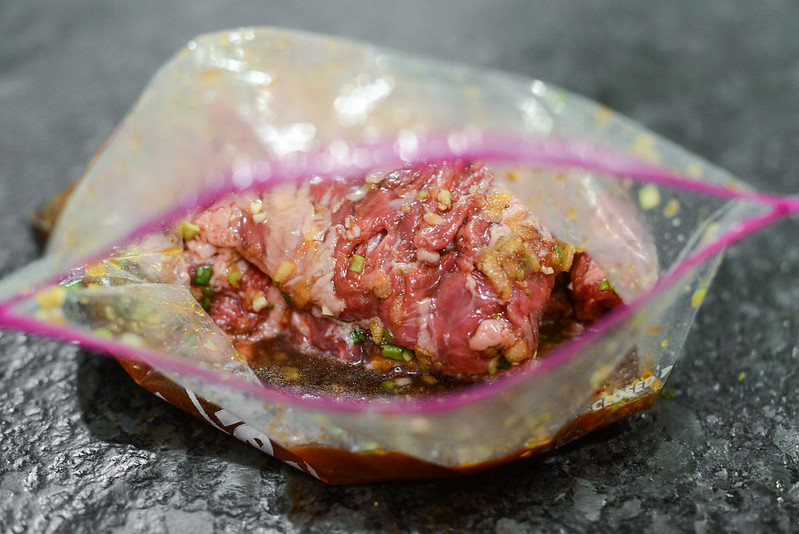 Not being an overly acidic mixture, I felt comfortable with a long marinating time for this one. So I prepared my steak the night before and let it soak until it was time to grill the next day. 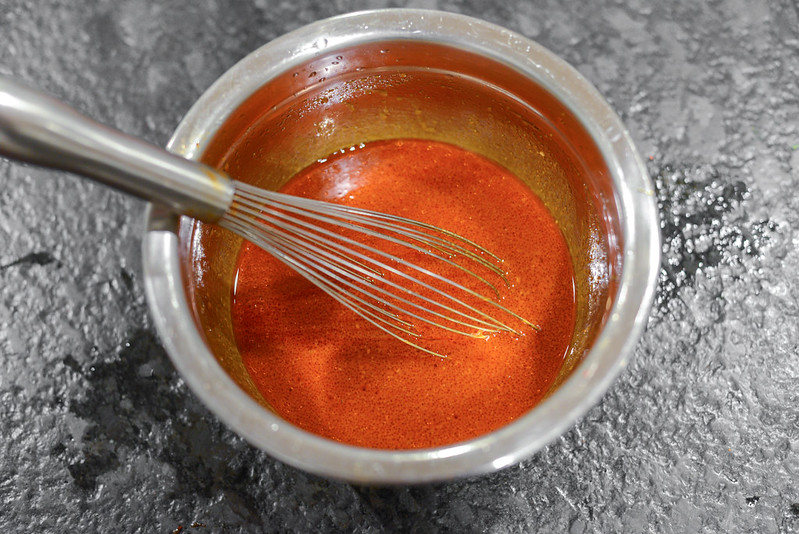 For the accompaniments, I went for a trio of Momfuku sauces. You definately don't need to put together all three, but they are simple, and it seems like in Korean food, the more toppings, the better. The first one I made was a ssam sauce, which was a mixture of ssamjang (fermented bean and chili paste), gochujang (spicy fermented chili paste), sherry vinegar, and oil. 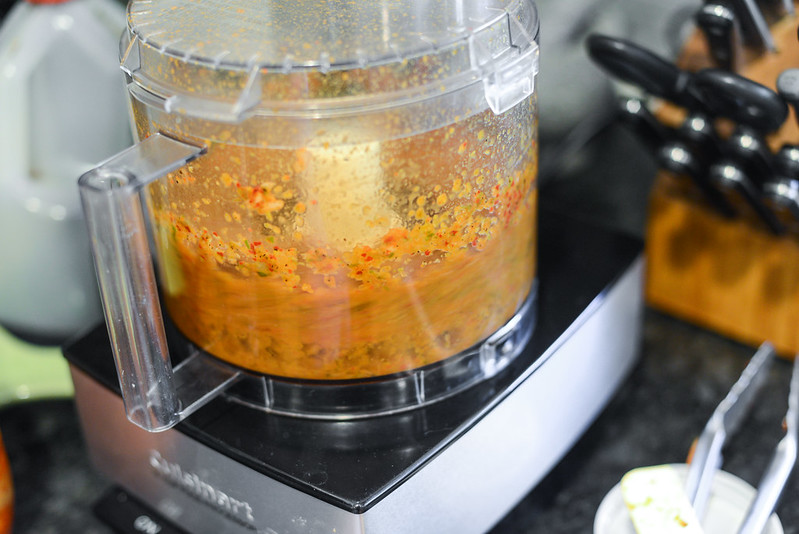 The next condiment—kimchi puree—couldn't have been easier. It was quite literally just kimchi pureed in a food processor. Mine was a little special though because I used my homemade grilled kimchi, which had been fermenting for a month, resulting in a very sharp and sour flavor where just a little bit would go a long way in the ssams. 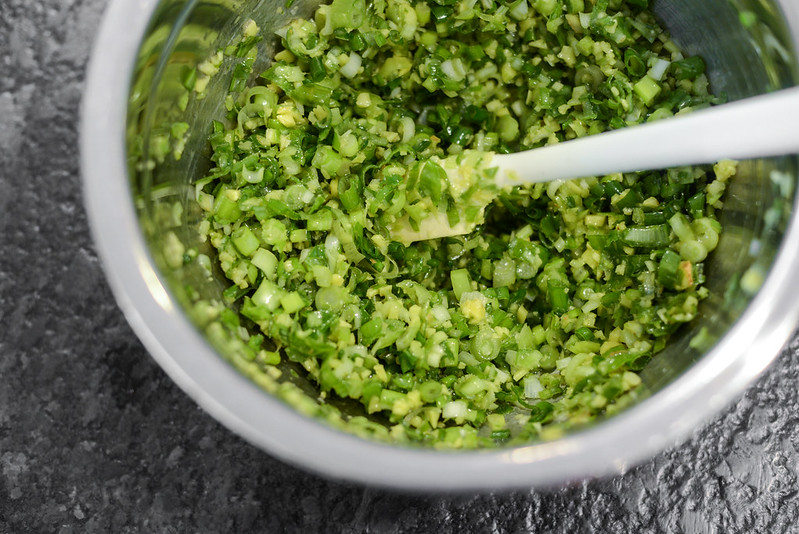 The final sauce was a ginger-scallion combo that also included oil and vinegar. It's a simple mixture that packs a lot of power. The ginger imparts and really strong bite that's complimented by the fresh and onion-y scallion as well as a light background tang. The first time I ever tried this sauce it blew me away, and shocked me even more when I found out how little goes into actually making it. 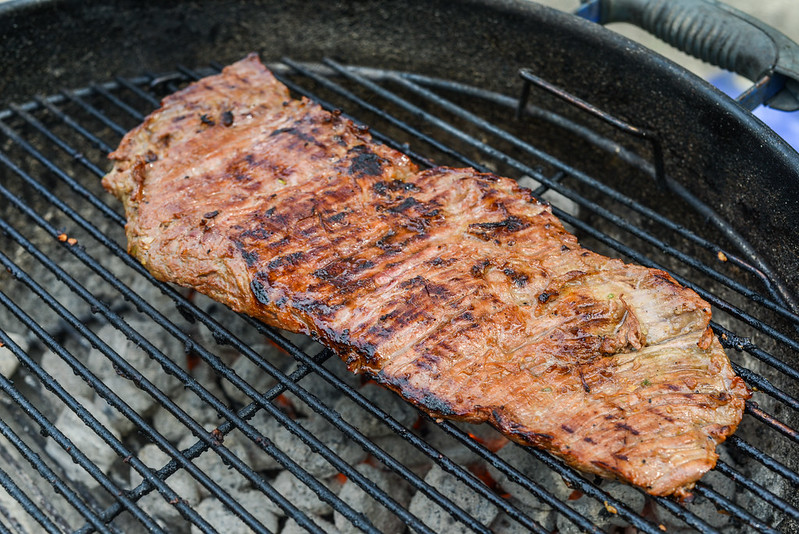 As I mentioned earlier, scorching heat is a skirt steak's best friend, and a freshly lit batch of coals is one of the best ways to get maximum heat output. The goal is get a great sear on the outside without bringing the interior above the medium-rare range—too much more would render the skirt steak too chewy and less flavorful. When you're working with a fire that's clocking in around 600°F or more, these two ideal characteristics tend to happen in harmony. To promote better browning and even cooking, I like to flip my steak every 30 to 60 seconds, and almost always by the time it takes for a crusty sear to develop, the inside is rosy red and registers around 125°F on an instant read thermometer—although I'll admit skirt steak is one cut I usually go by feel and instinct rather than temperature. 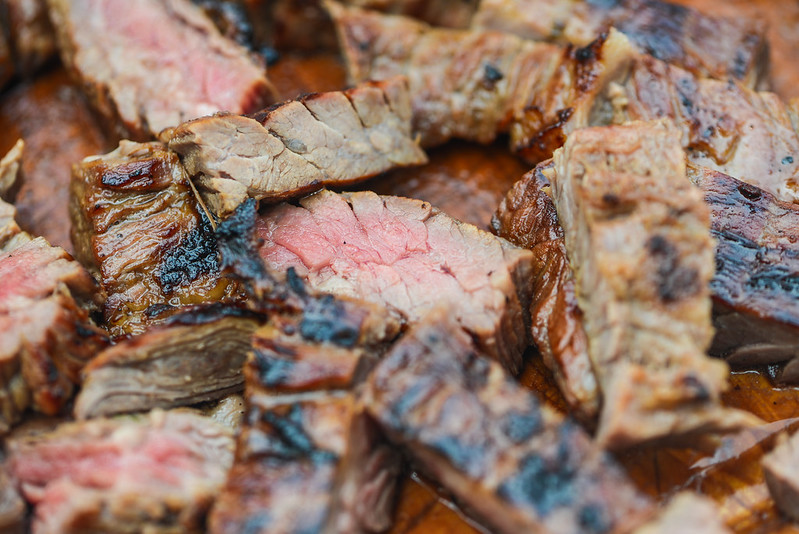 A hot grill is only half the equation to excellent skirt steak though—how you slice it is equally important. The long muscle fibers of skirt can make it incredibly chewy if they're not severed into smaller portions. Luckily, those muscle fibers are easy to see and all you have to do is cut the steak perpendicular from them in about 1/2-inch slices. 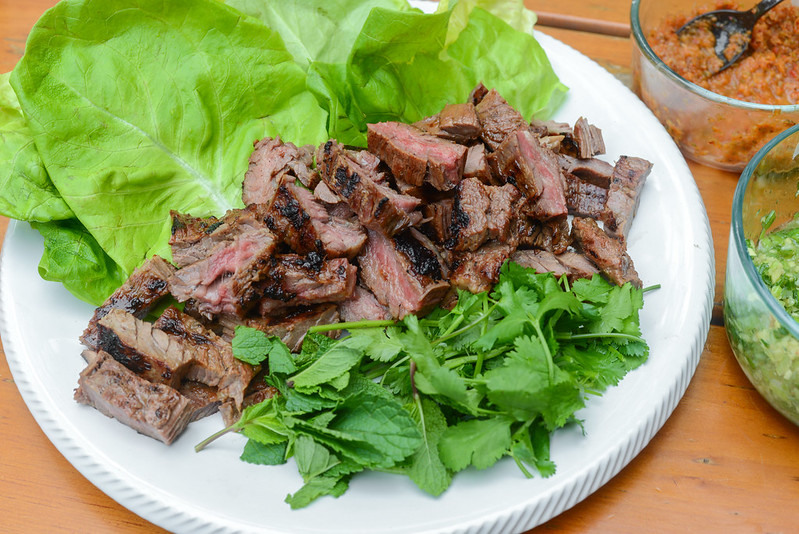 Once I had the steak sliced, everything was ready to go and I plated with the steak and bibb lettuce for the wraps presented on one large platter—along with some extra greens for garnish. I then placed the three sauces around the plate and invited everyone to dig in. 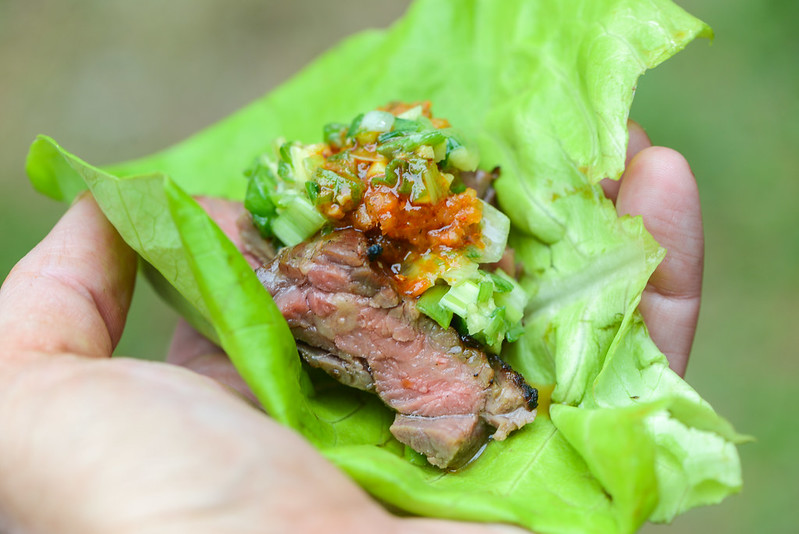 Ssam technically translated to "wrapped," which is how you're supposed to eat this. To make a wrap, I started with a piece of lettuce, piled in as much steak as I wanted followed by any assortment of the sauces. Put altogether, it was a symphony of flavors. The steak laid a beefy and savory foundation by which the sharp and fresh ginger-scallion dressing, sour and spicy kimchi, and tangy ssam sauce all found a welcome home. Like so many Korean dishes, there was a lot going on, but tasted like everything was working together to form something incredible and unique, so much so that by the end, I totally forgot this didn't fulfill my initial urge for hanger steak and was just able to bask in all of the delicious ssam glory.