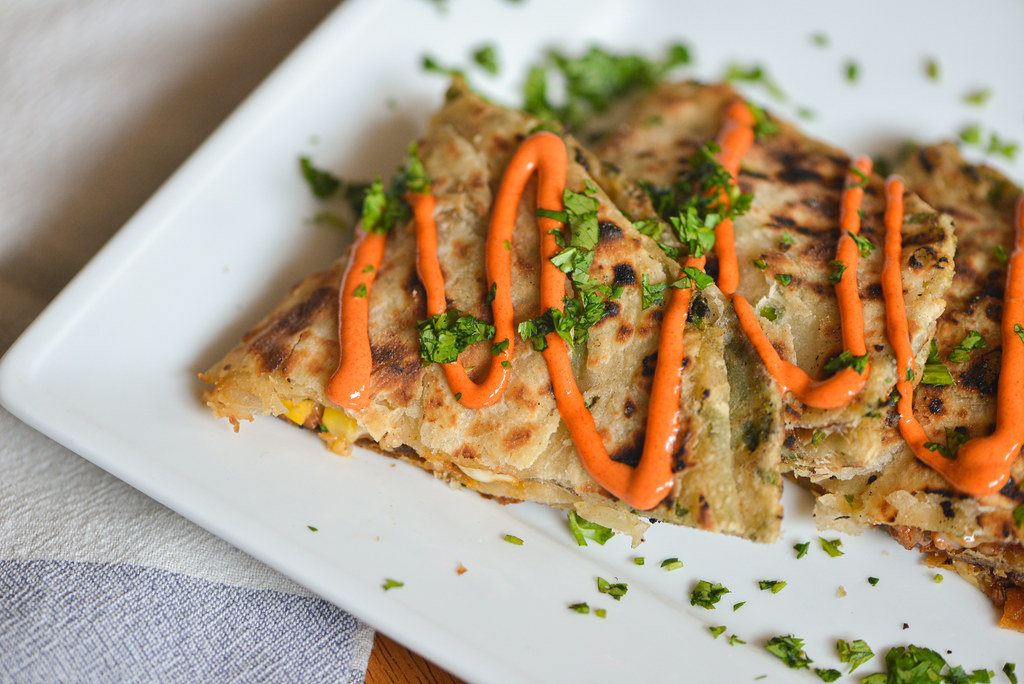 Daeji bulgogi scallion pancake quesadillas. Whew, that's a lot of things in the title of one recipe. I've actually seen Korean barbecue scallion pancake quesadillas on other sites before and thought they may be a little "too much" and never really had the desire to try it out myself. You can thank the pandemic for changing that though because I've been so missing my regular Korean barbecue outings that I had a real desire to make some at home, and while I was at it at, I grilled enough meat for multiple meals and this was one of the things that was born of that. Having now have tried one of these creations, I can firmly say that, while the title may be a mouthful, these quesadillas did taste pretty ultimate. 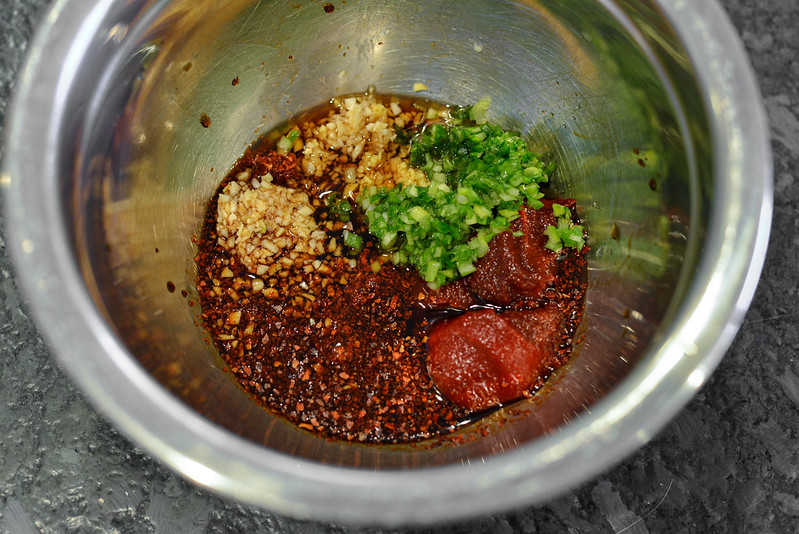 Large group Korean barbecue outings have been one of my most missed restaurant experiences while we cannot eat out together. They're so special to my heart that I decided to make Korean barbecue my Christmas dinner this past year, grilling up galbi and pork belly and serving it with all the kimchis and fixin's for just me and my wife. Since it was only the two of us eating, I had to keep the meat selection scaled small, which made me skip my favorite spicy pork daeji bulgogi. That left me with a hankering for it, making it the first thing I turned to when I decided to grill up a new batch of Korean barbecue. 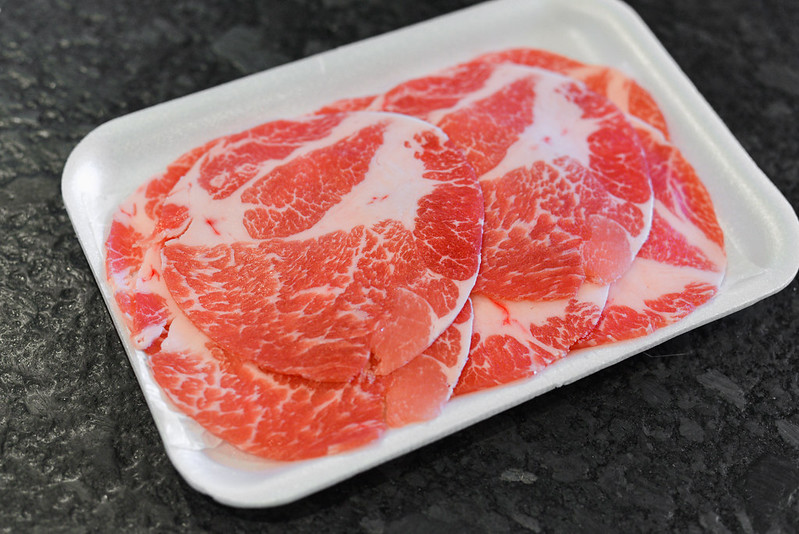 I've made my daeji bulgogi recipe so many times that I consider it a dependable workhorse at this point. The sauce is pretty straightforward, but for the best success you should be sure to pick up some very thinly sliced pork shoulder or belly that has good marbling. The fat content here is key to getting meat with the most flavor and that doesn't completely dry out as you technically overcook it on a hot fire. Plus, the dripping fat causes small flare-ups and smoke that further enhances the flavor of the meat. 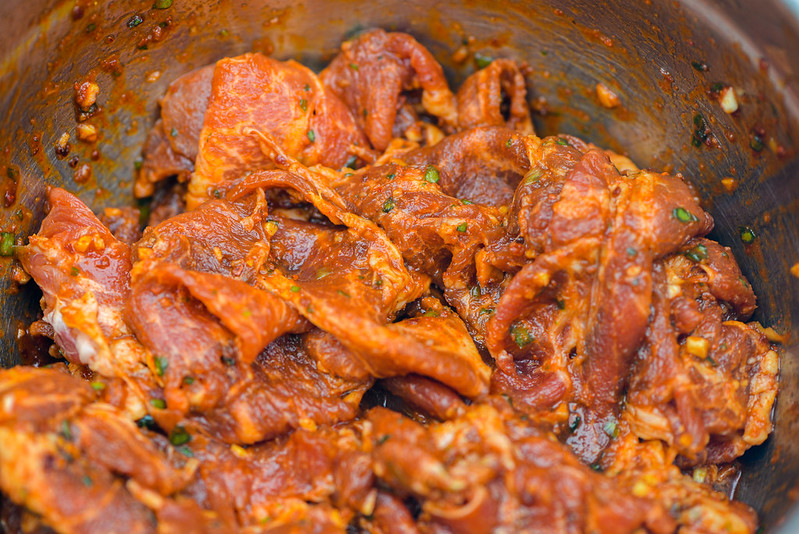 It's also important to make sure that meat all gets well coated in the gochujang-based marinade so each piece is fully flavored. For me, I assemble the marinade in a bowl, add in the meat, and then use my hands to work the marinade in throughly. The meat falls apart a bit doing this, but that's actually a desired result since smaller, bite sized pieces of pork are what you want in the end anyway. 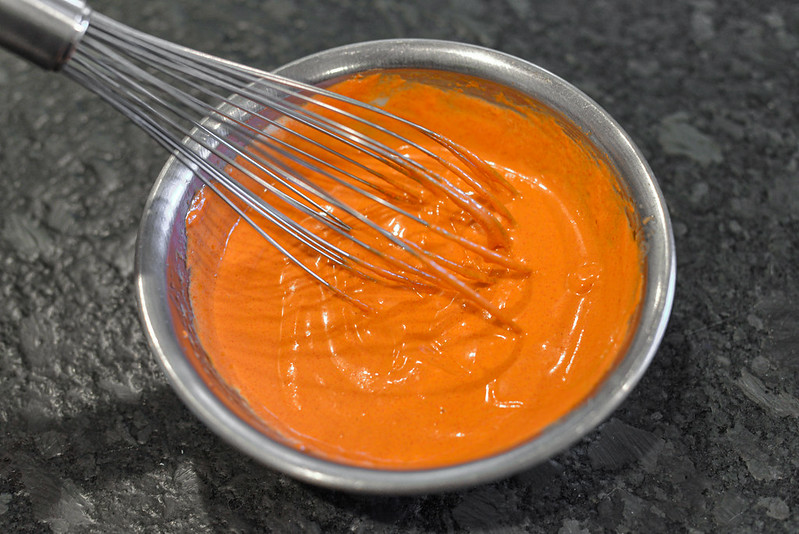 While I had various sauces out of the cupboard already to put together the marinade, I decided to make a flavored sour cream for the final dish too. A quesadilla doesn't feel completely to me without sour cream, so I think this a pretty crucial part of the final recipe, but if you're not that type of person, you can consider this part optional. I began by mixing sour cream with gochujang until it tasted mildly spicy, then added in a splash of lime juice which brightened it up, and a little toasted sesame oil, adding a complex, yet subtle, nutty undertone. This tasted pretty great with those four minimal ingredients, so I didn't tinker with it anymore and transferred it to squeeze bottle for storage. 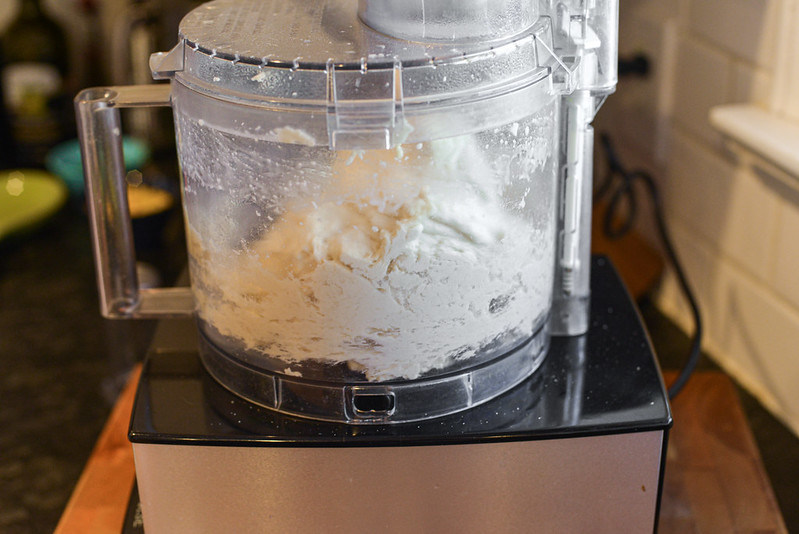 Scallion pancakes are another thing I've made so many times now that my confidence in the method and recipe, which was adapted by Kenji López-Alt's version, are on par with the daeji bulgogi. You can find scallion pancakes throughout my archive and I have the procedure well documented, but since it's not the easiest thing to understand, I thought it was worthwhile to run through it in photos again. 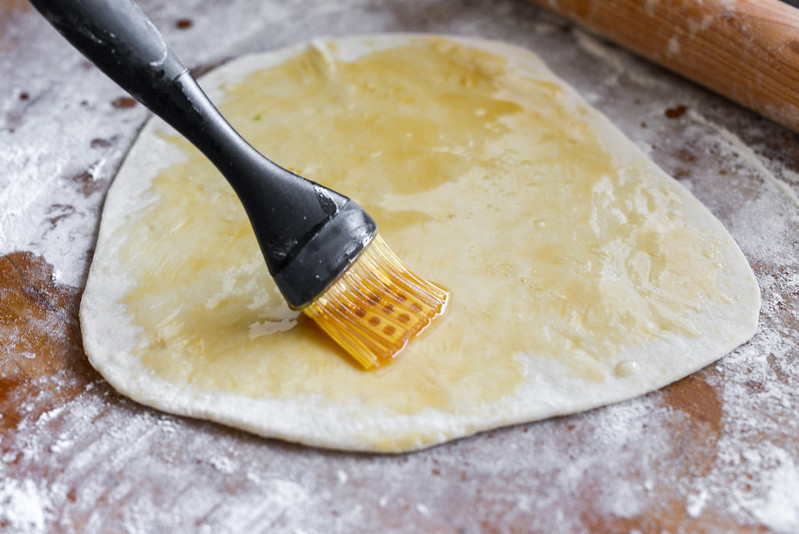 The dough is merely two parts flour to one part boiling water formed in a food processor. After letting that rest for 30 minutes, the dough is divided into individual portions for pancake creation, which begins by thinly rolling one piece out and brushing on a layer of sesame oil. 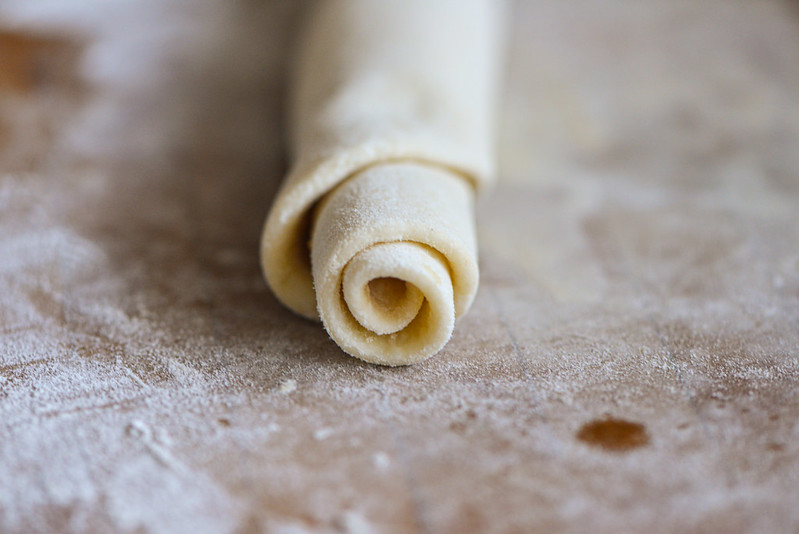 Next, starting at one end, the dough is rolled closed like a jelly roll. I've found if there's too much sesame oil, the excess ends up leaking out and makes a mess during this step, so it's helpful to make sure you're applying only the thin coating actually needed. 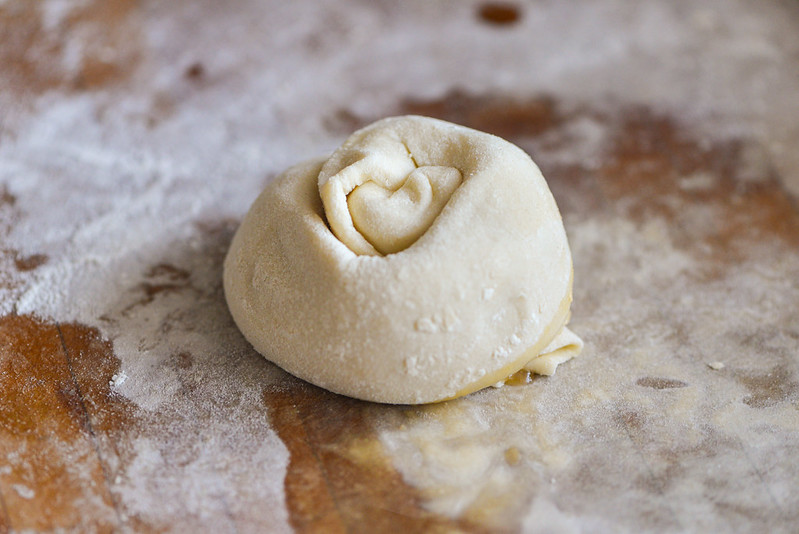 Next, that rolled dough is formed into a spiral and the end piece of that spiral is tucked under the bottom of the dough roll. Then the dough is rolled out again into a flat circle, adding more flour to the dough and cutting board as needed to prevent sticking. 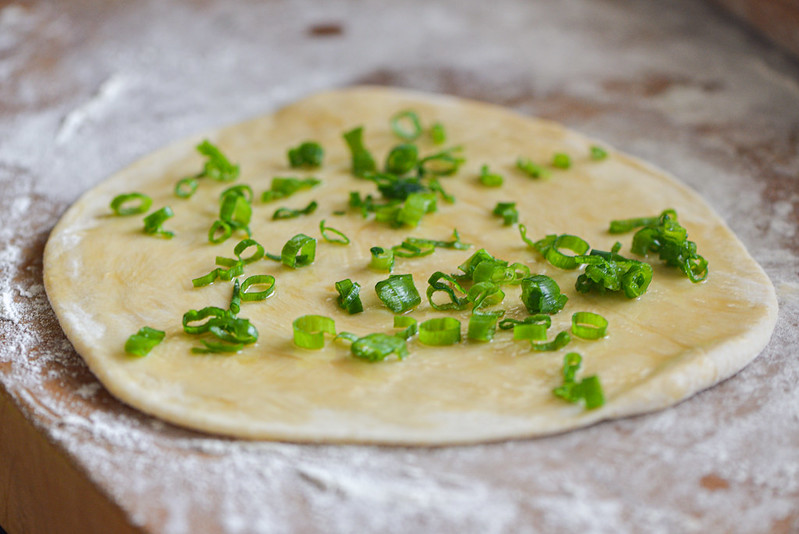 Another layer of sesame oil is applied followed by a sprinkling of salt and sliced scallions. My regular scallion pancake recipe calls for way more scallions then this one does and that's by design. The next step is to repeat the rolling and flattening one more time, and when a large amount of scallions are added, the dough cannot be rolled out as thin as before, which is what you want for a traditional scallion pancake. For use as quesadillas though, I wanted the final product to be a little closer to a tortilla, so going light on the scallions allowed me get a thinner, and larger, scallion pancake that was better suited for it's quesadilla-making function. 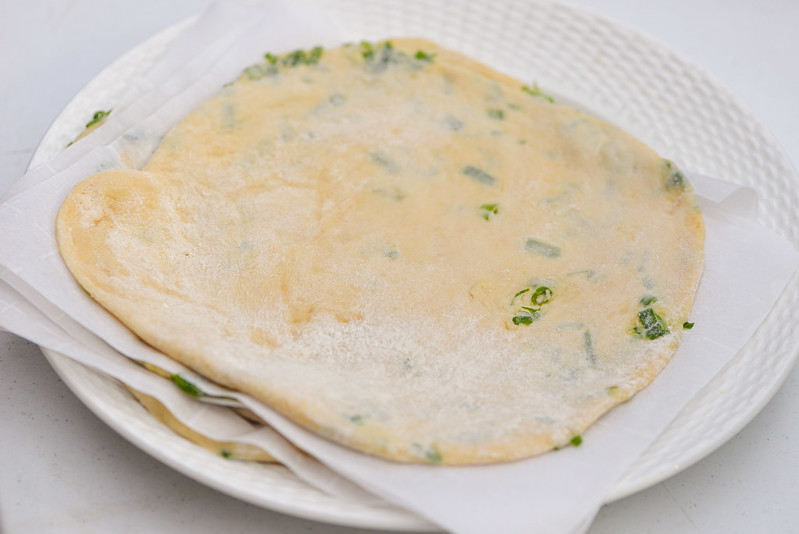 You can expect the first couple times of working through the scallion pancake procedure to take some time, but once you have it down, it's pretty simple and goes fast. I actually lit my fire first, then went inside and rolled out the pancakes, stacking them on a plate with parchment between them to prevent sticking. Then I gathered everything I needed for grilling and went outside to my now fully lit batch of coals. 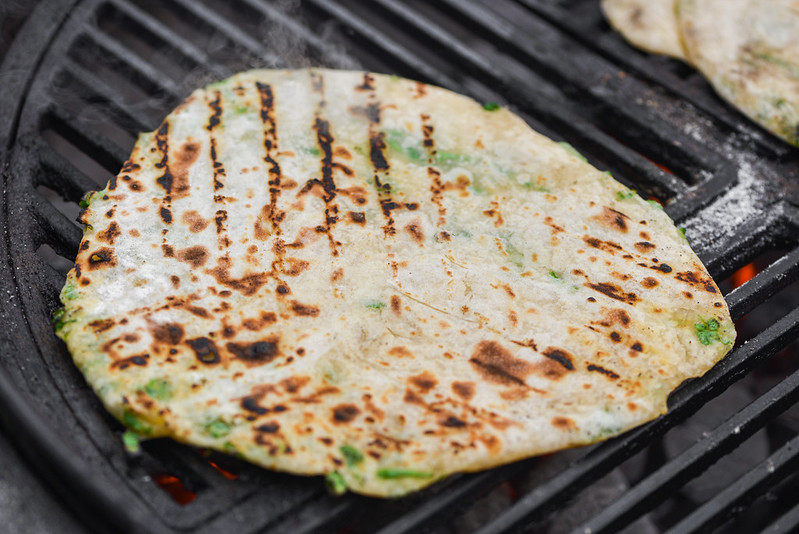 The scallion pancakes turn out best with high heat, so freshly lit charcoal is key. The high heat also means they can char very quickly, so I'm vigilant when cooking them, flipping and moving them around often to ensure they're cooking evenly and not burning to a crisp. 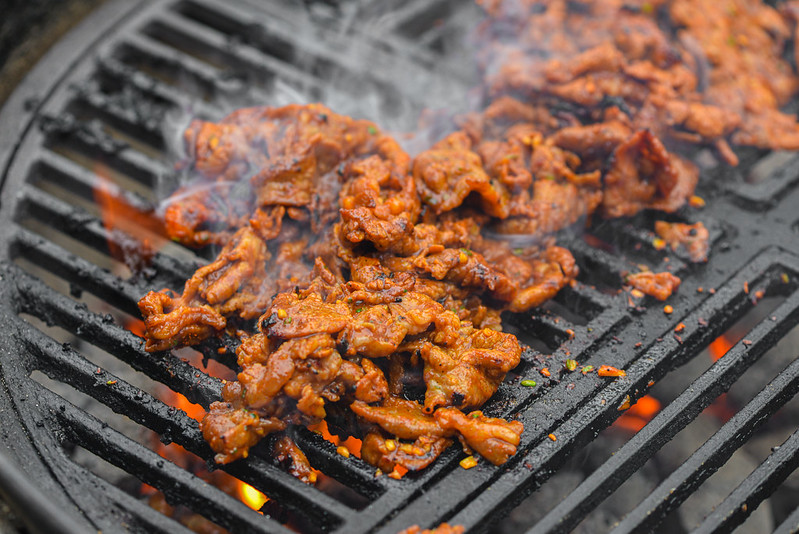 The pancakes only took a minute or two per side, so once all were cooked, the fire was still blazing hot, which is what I wanted for grilling the pork too. You would think these thin, small pieces of meat would not be well suited for grilling on American style grates, where the extra space can let food easily fall through, but I've found keeping the meat together in one mass prevents it from falling through and also leaves you with pork with an ideal doneness where all of it is cooked through and tender with just enough charred bits around the edges to give you that identifiable grilled flavor. 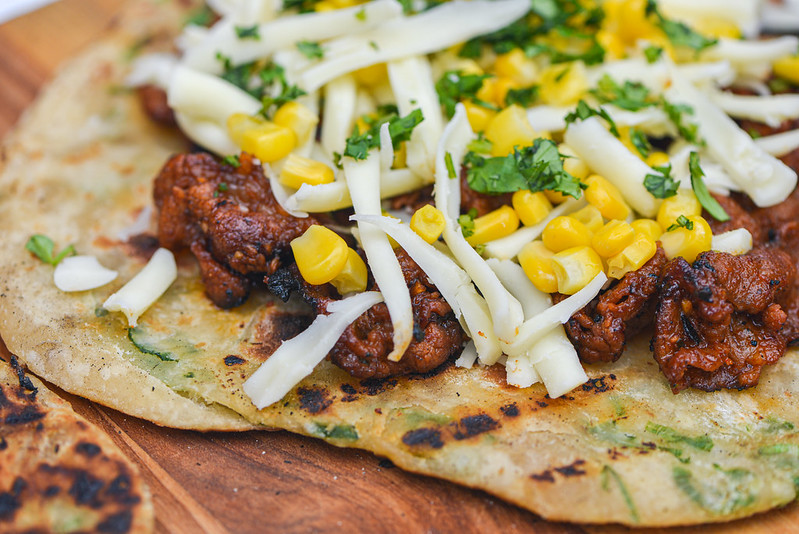 Once the pork was done, I spread a layer on a couple scallion pancakes and then topped with grated low-moisture mozzarella followed by a little cilantro and corn kernels. The corn is a nod to the corn cheese often served alongside Korean barbecue, and I find the sweetness of that dish to be a good contrast to the savory, and sometimes spicy, meats. 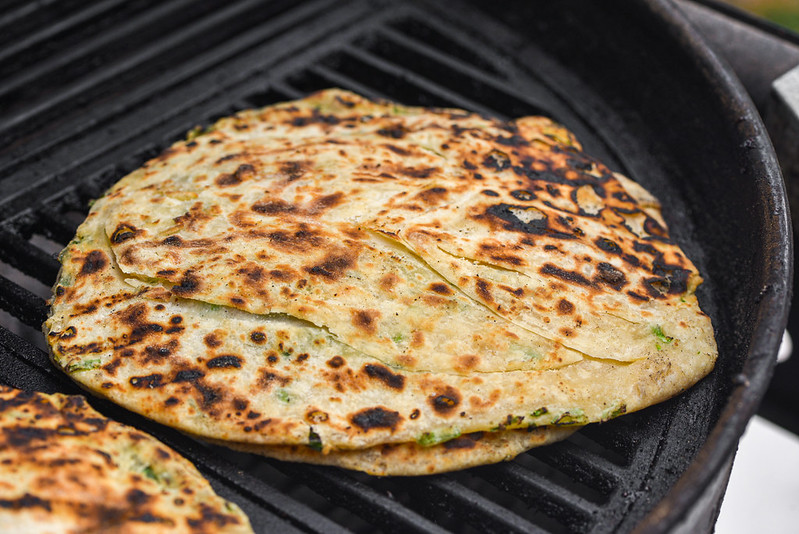 Then I put the fully assembled quesadillas on the grill, over indirect heat, and covered. I just needed to get the cheese melted, which took about five minutes. I checked how they were doing a couple times during cooking and rotated them as needed so the parts closest to the fire didn't start to brown or burn. 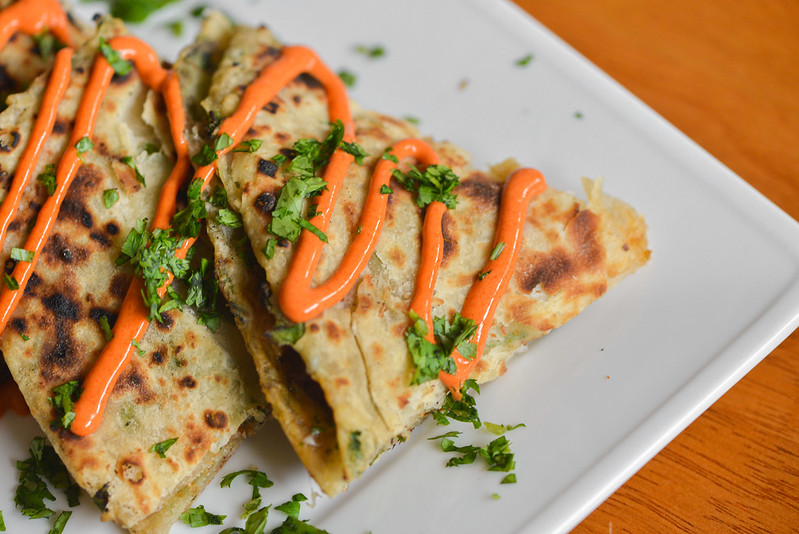 Once done, I cut the quesadillas into quarters, plated, and squeezed on a layer of the gochujang sour cream. What I considered might be a little "too much" when seeing these elsewhere ended up not tasting that way. The daeji bulgogi was the bedrock of the flavor with its heartiness and distinct spicy character delivering the Korean barbecue taste experience I was craving. The mozzarella tempered the heat though, which was even more balanced out by the pockets of sweet corn. The scallion pancake was tender and flaky, just as it should be, but it was still substantially heavier than a flour tortilla, giving this quesadilla more heft than a normal one. I had made two of these, thinking both my wife and I would each eat our own, but splitting one was enough for us and we got to reserve the second for leftovers. Now that I've made these and realized there's a lot going right in what may look and sound like an over-the-top mashup at first glance, I may act on some similar ideas that have given me pause in the past and see if I may be wrong about those too.