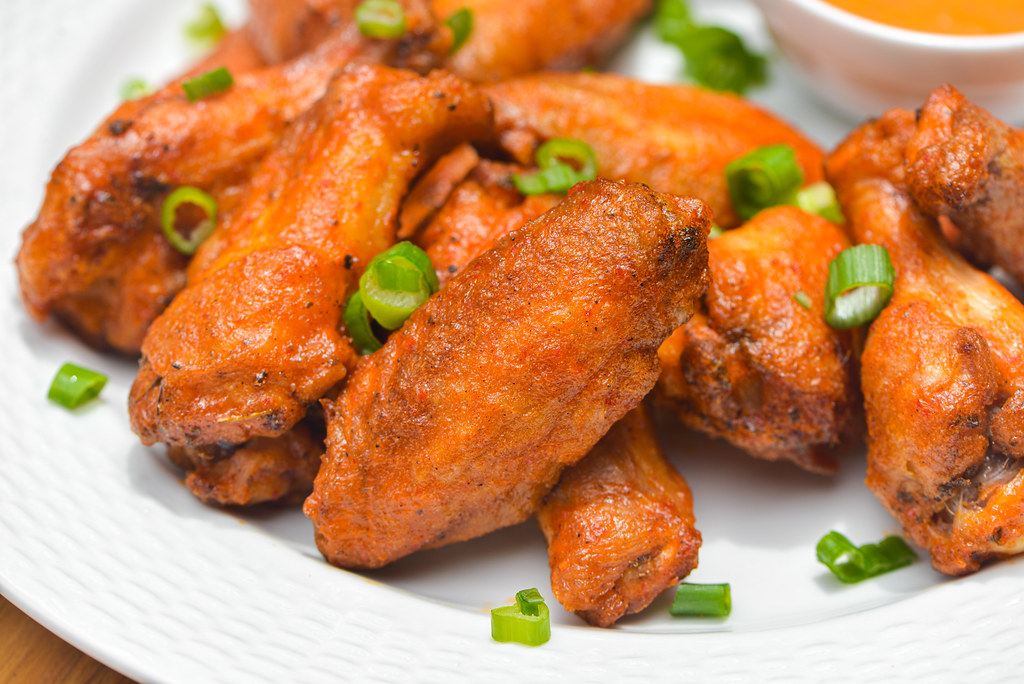 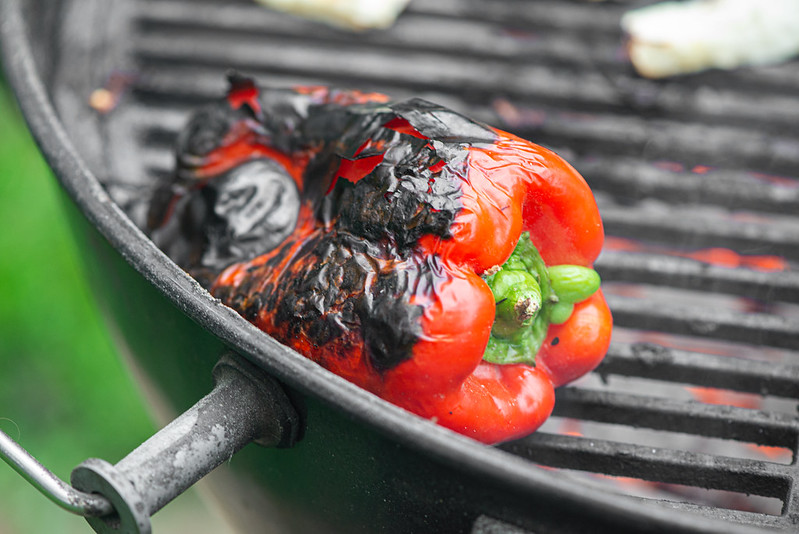 Unsurprisingly, piri piri sauce comes from piri piri peppers, which are a pretty hot variety that were originally cultivated in Africa by Portuguese colonialists. The sauce made from these peppers seems to be Portuguese in origin, but there are local variations around Southern Africa, and I'm not sure if what I made resembles any one specific locale's version or just some bastardization of all them combined. I followed a path to my recipe from various internet inputs, which have steered me wrong before, but all pretty much said you need some roasted red pepper along with the spicy peppers, so that's where I started. I grilled up a red pepper until it was completely charred, then let it rest in a covered bowl prior to peeling, stemming, and seeding. 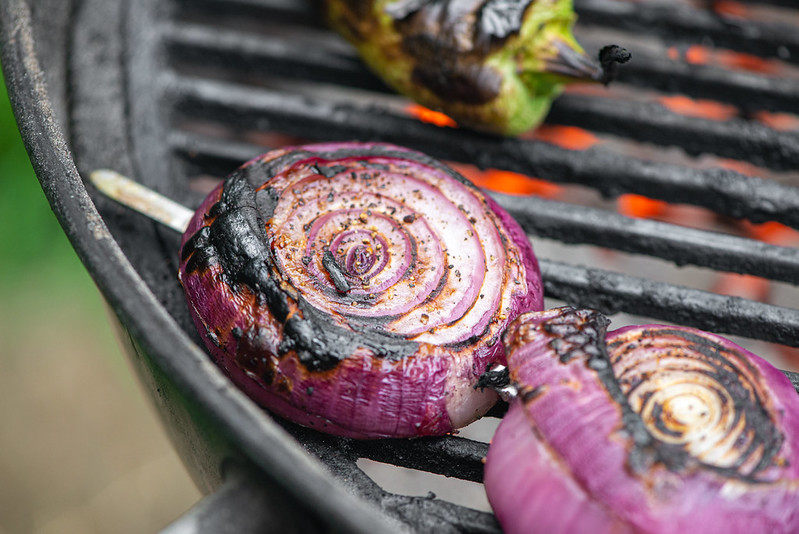 Roasted onion was also a common trait across many recipes, so I figured while I had the grill going, might as well cook up a few onion slices as well. I grilled these until charred on each side and fairly soft throughout, which took around five minutes per side. Pro tip here, skewer your onion rings horizontally before grilling, which keeps them in tact and laying flat throughout cooking. 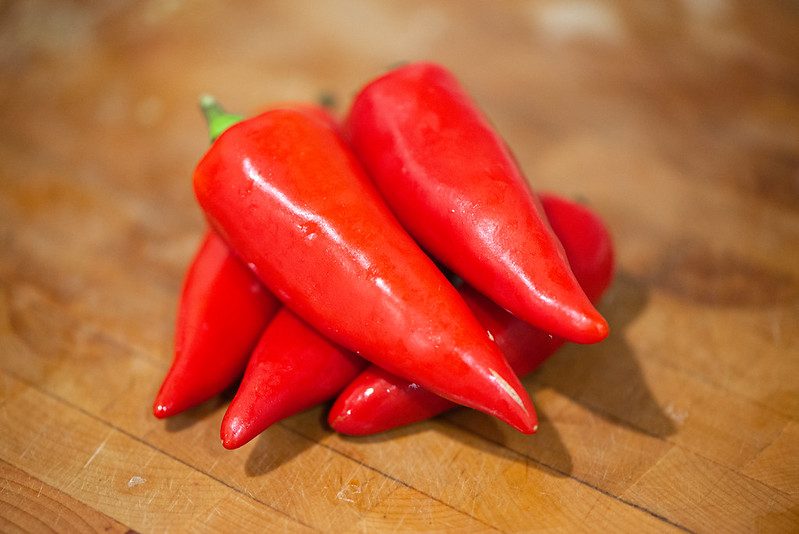 Now it would seem piri piri peppers should be an absolute requirement for this sauce, but I had a hell of time trying to find fresh ones anywhere in stores or online. It seemed like in colors, size, shape, and heat output, Thai birds-eye chilies may have been the best substitute, which I can normally get easily, but my local source was all out of the red ones while I was working on this recipe. So I went with the next option available to me, Fresno chiles, which are much lower on the Scoville scale, so I made up for that by using even more in my recipe to up the heat. 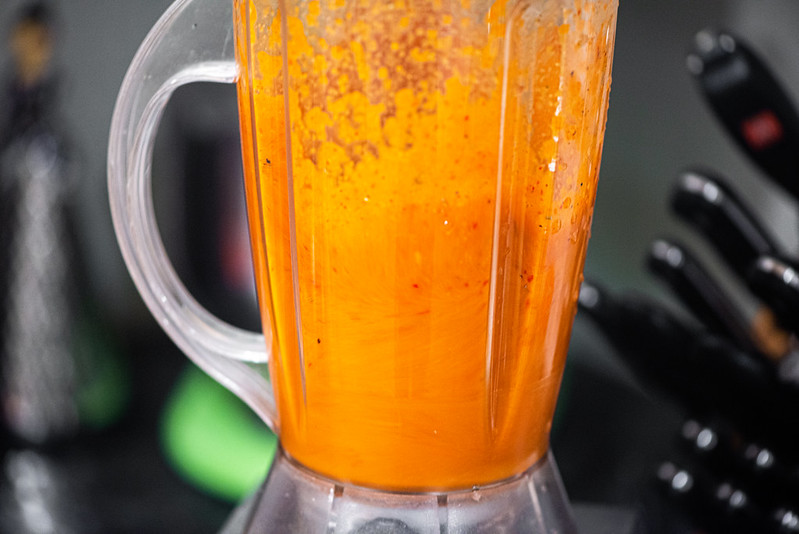 I created the first phase of this sauce by pureeing the roasted red pepper, onion, Fresnos, garlic, lemon juice, lemon zest, oregano, and smoked paprika together in a blender until completely broken down and as smooth as it was going to get. 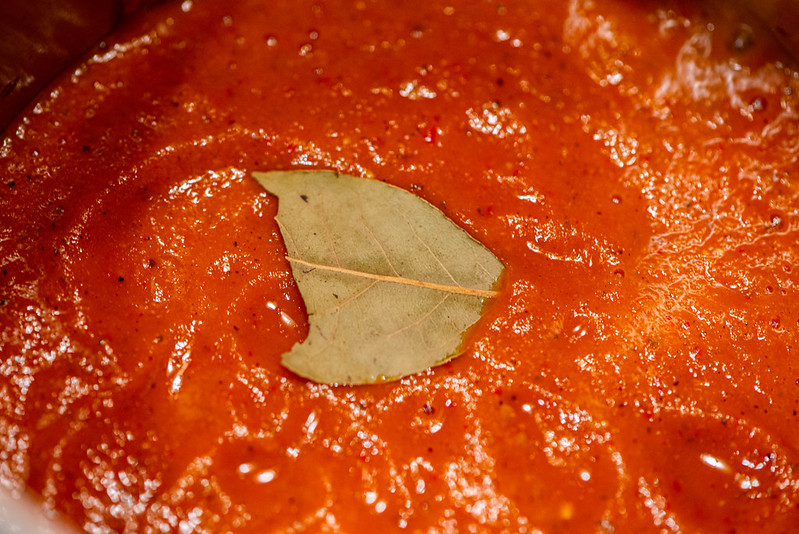 I then transferred that mixture to a saucepan, added in a bay leaf, and simmered for 15 minutes to both slightly thicken the sauce and intensify its flavor. At the end of the simmering time, I removed the bay leaf and whisked in oil and vinegar, which put the cap on the sauce creation. 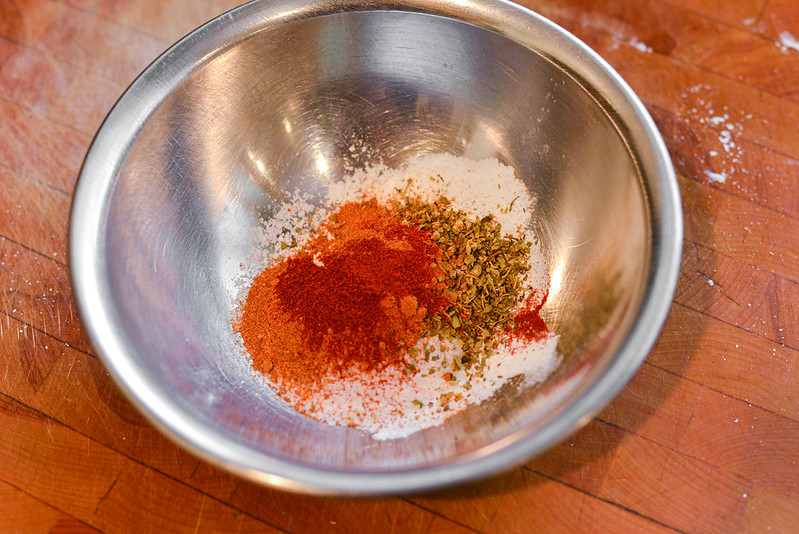 I went with my standard spice coating and air drying method for preparing the wings, which is the recipe for the crispiest skins you'll get on the grill. For the spices, I mirrored the flavors in the sauce, utilizing oregano along with smoked and hot paprikas so the wings would start a foundation to what I was tasting in the sauce. 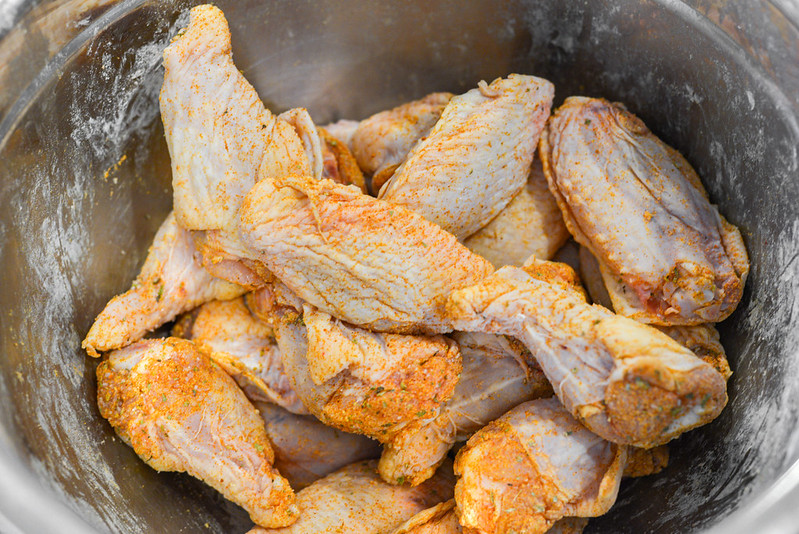 After making the seasoning mixture, which also included salt and baking powder, I patted the wings dry, tossed them in a large bowl, and coated them thoroughly. 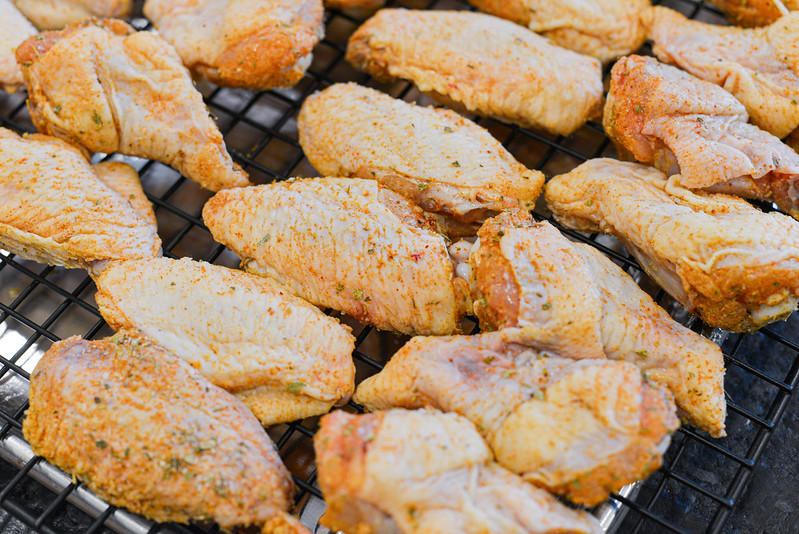 Next I arranged them in a single layer on a wire rack set in a sheet pan, then placed the pan in the fridge to air dry overnight. If you've never done this step before, you'll definitely notice a big difference in the moisture of the skin between when the wings go into the fridge and when they come out, and that is one reason why they grill up to be so crunchy. 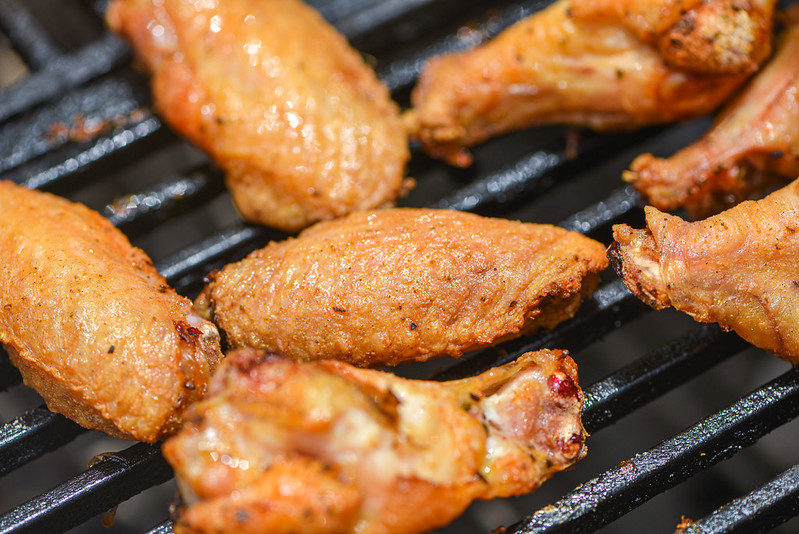 To get that great crackling skin, the wings need about 45 minutes of cooking time over high, indirect heat on the grill. Because wings have a fair amount of fat, they can take this long cooking time and still remain plump and juicy inside, and that's one reason I love cooking them so much—they're really hard to screw up! 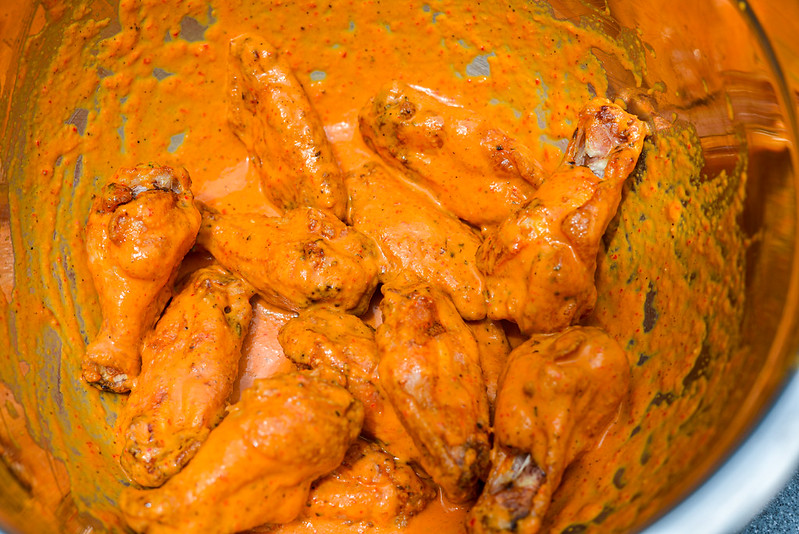 Once crisped to my liking, I moved the wings into a large bowl and poured in enough sauce to coat them well. At this point, a lot of my wing recipes would be done, but the few times I have had piri piri chicken, it's never been saucy like these currently were, so I put the wings back on the grill for a bit to allow the sauce to bake down. 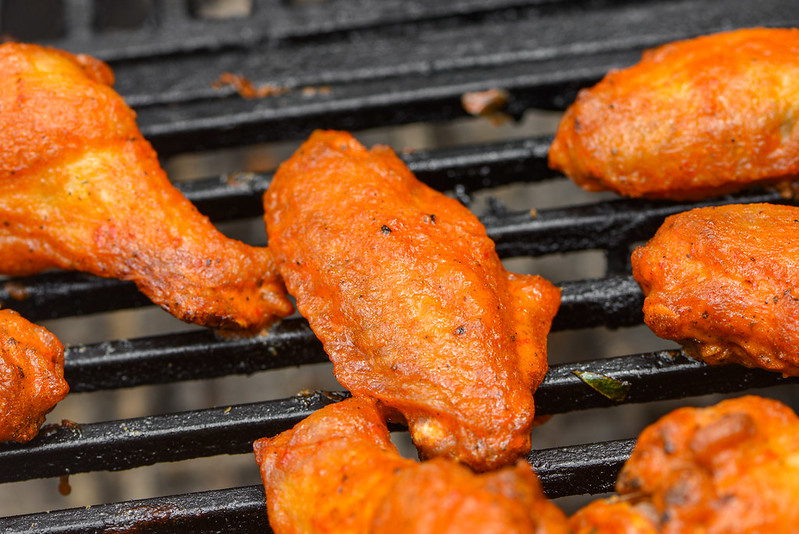 I did this part over direct heat, which by this time was running at around a medium 325°F. Even though it wasn't all that hot, it only took a few minutes for that sauce to thicken up and for these to be done. I then plated them and served with some extra sauce for dipping. 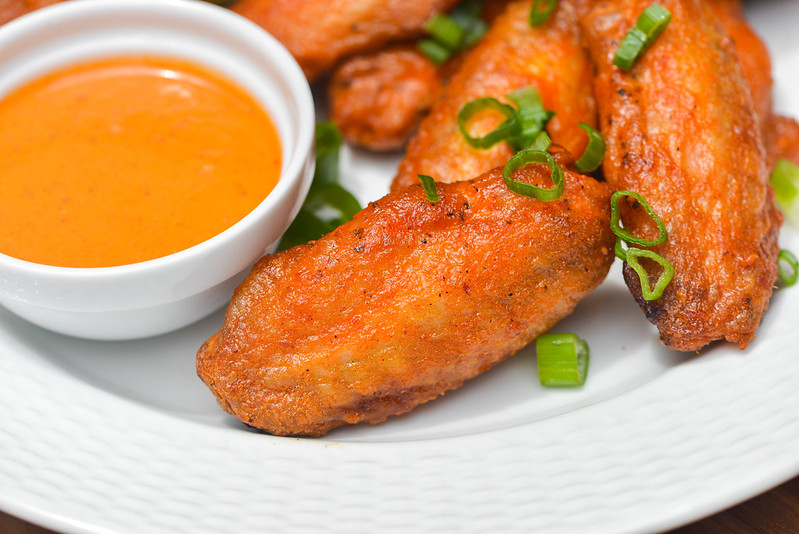 Y'all can tell me whether these represent any type of traditional recipe or not, but no matter if they do, I implore you to give them try because they were crazy good. That sauce was super addictive with a mixture of heat that was balanced with the sweet and fruity bell pepper and given so much depth from the onion, smoked paprika, and lemon. The sauce lost a little of its punch after being grilled, so I think some side sauce for dipping was key to deliver the full spectrum of flavors. In a way, I'm kind of hoping I'll walk away with egg on my face by "messing" up a piri piri recipe here because that would offer me an excuse to give them another go and try out more, and probably just as amazing, variations. 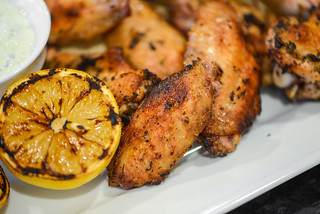 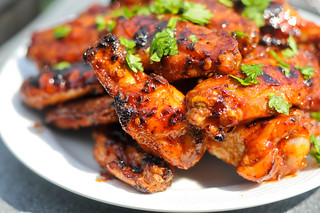