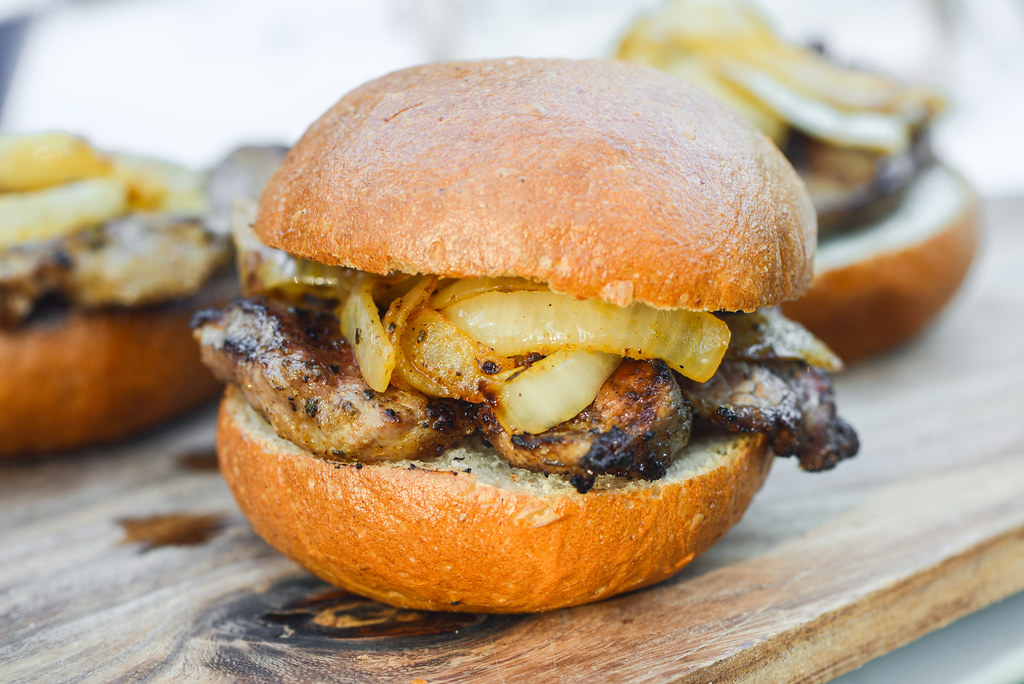 I'm no master of German cuisine, and when I decided to host an Oktoberfest cookout of sorts, my first, and only, recipes I thought of were all of the wurst variety. I felt like I both wanted to cook and offer more than sausages to my guest, so did some research on other ubiquitous German grilled meats and came across schwenkbraten—marinated and grilled pork neck steaks. It seemed like schwenkbraten consisted of three things, all dubbed schwenker—the unique suspended swinging grill over a live fire for cooking, the person actually doing the grilling (or most correctly, the swinging), and the meat itself. Seeing as I had two out of three and, having never had schwenkbraten before, I was freed a bit of the confines of authenticity, it seemed like a decent choice to help fill out the menu with at least one thing that fit the theme was not an encased meat. 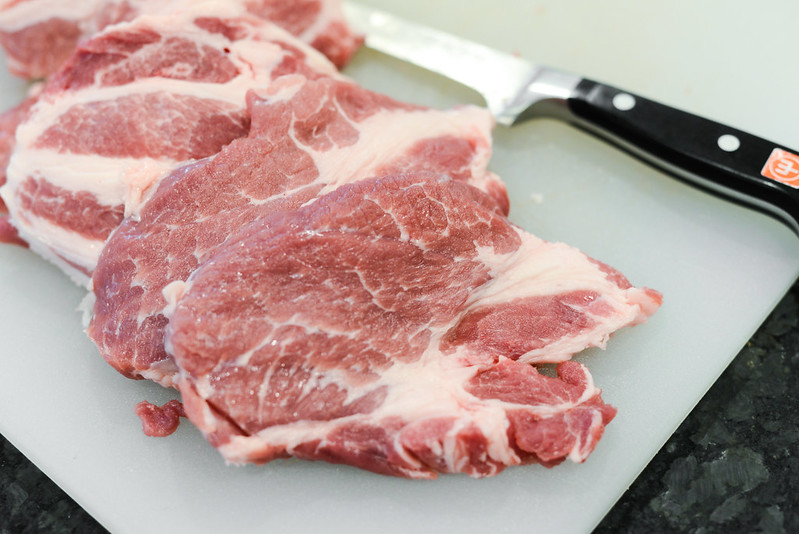 To start this recipe off, I attempted to get some true pork neck steaks, and while pork neck wasn't all that difficult to find, procuring it in a steak fashion, and not cut into little pieces, was. So I did what I figured was the next best, and closet thing. I trimmed off half-inch thick steaks from a pork shoulder I was also using to make sausages. Seeing as the shoulder is pretty close to the neck and the steaks had a similar amount of fat and connective tissue, I felt good that this was the right direction. 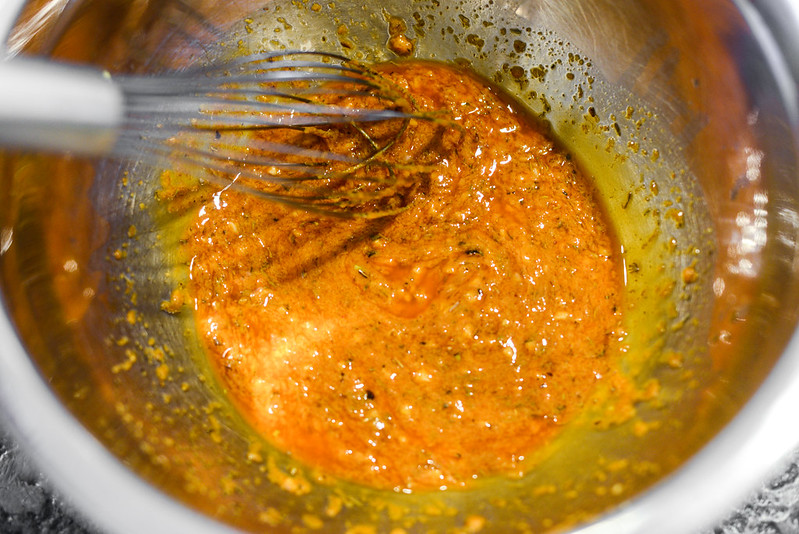 The flavoring of the marinade seemed a little bit like a cook's choice. I read recipes and watched some German Youtube video for research and what went into the sauce was wide and varied. Most everyone had oil (of course), garlic, juniper berries, and mustard. So I began there added in dried thyme and oregano for the herbal component that looked common, as well as paprika and cayenne for a touch of spice and heat. 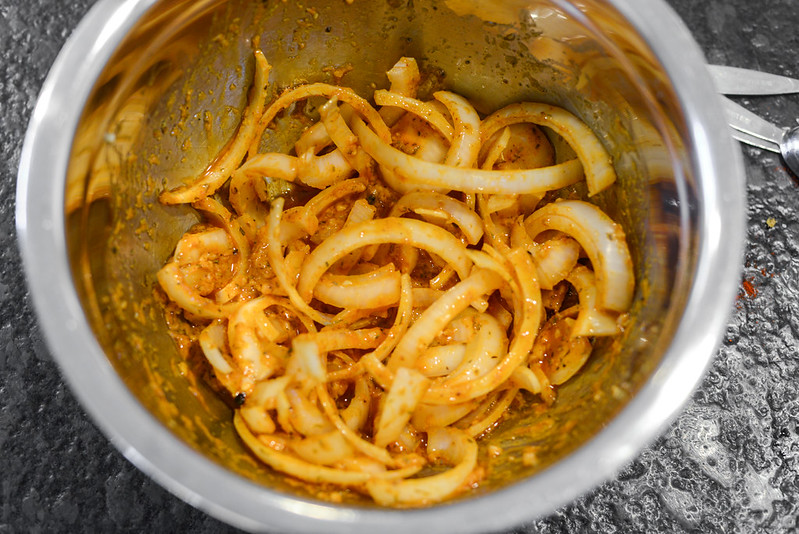 Onions also seemed a must, so I tossed one sliced onion into the marinade and coated it, along with the pork, in the liquid. My plan later was to make use of those onions by grilling them and using them as a topping for the sandwiches. 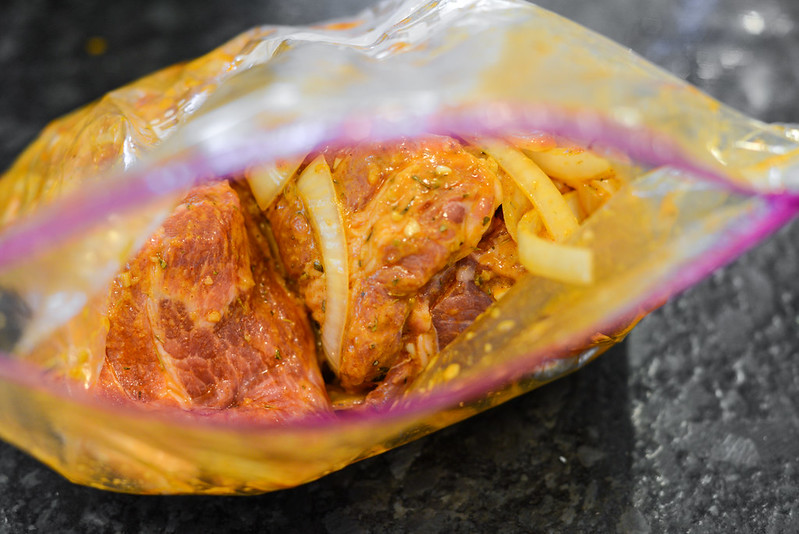 Another hallmark of schwenkbraten recipes was a long marinade time. Seeing as there wasn't a whole lot in the marinade that would actually react with the meat to make significant changes over time, I question if that is really a necessity, scientifically speaking. I did marinate mine almost 24 hours since I prepared it the afternoon before the event, but I would imagine less time wouldn't produce dramatically different results. For good measure though, I left he ideal timing from overnight to two days in the final recipe. 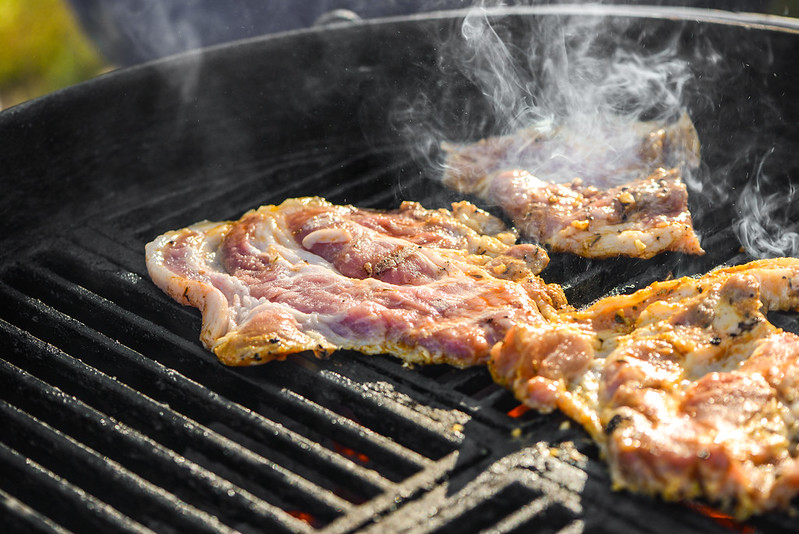 My major area of concern in making these was how they would turn out cooked over high heat. Pork shoulder, and neck, is full of fat and connective tissue that is chewy and tough when cooked quickly, but renders when cooked low and slow. If using a traditional schwenker, I assume the grilling is a bit slower than on a grill since the coals are further from the grill grate, but it's still hot and fast cooking and not what I was used to for shoulder meat. 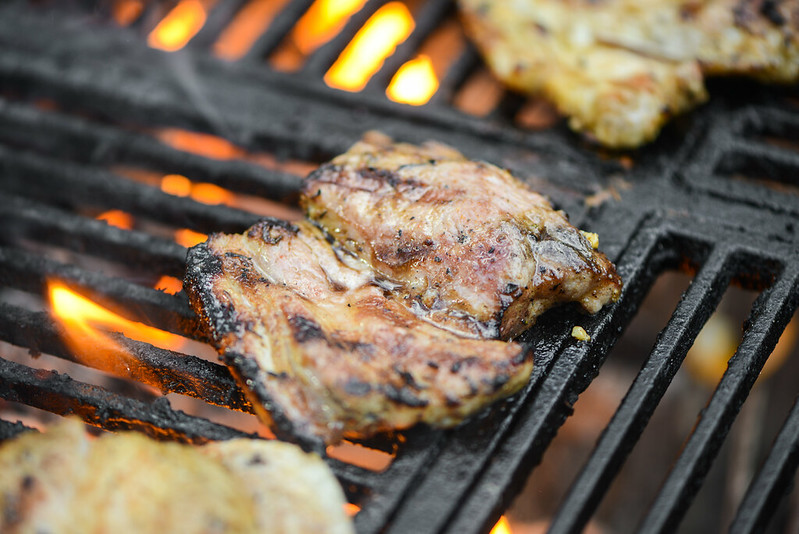 I must say though, they did grill up to be really beautiful. In just a few minutes per side, the thin steaks developed a nice sear with attractive browning and were also just cooked through, without being over done—so the hot fire did its job in this respect. 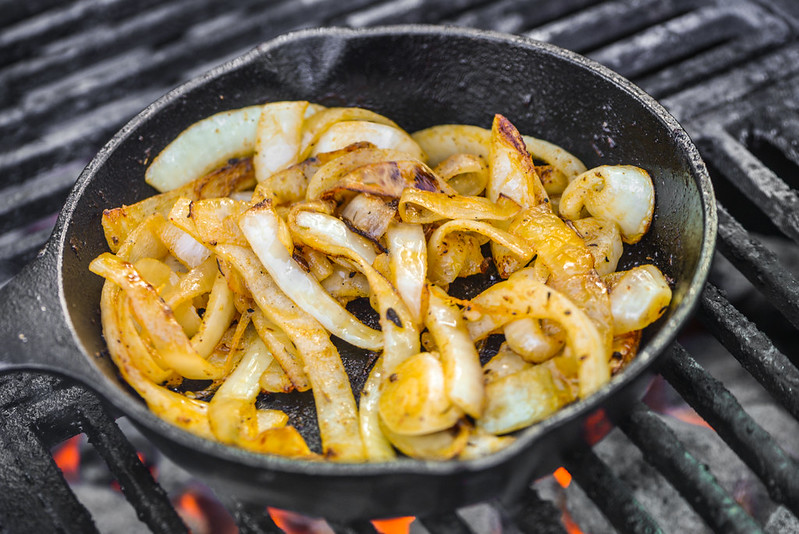 Once the steaks were done and I had room on the grill again, I put a cast iron skillet over the coals and let it preheat for a few minutes. I then took the onions from the marinade and cooked them in the hot skillet until they were crisp-tender, which took about five minutes. 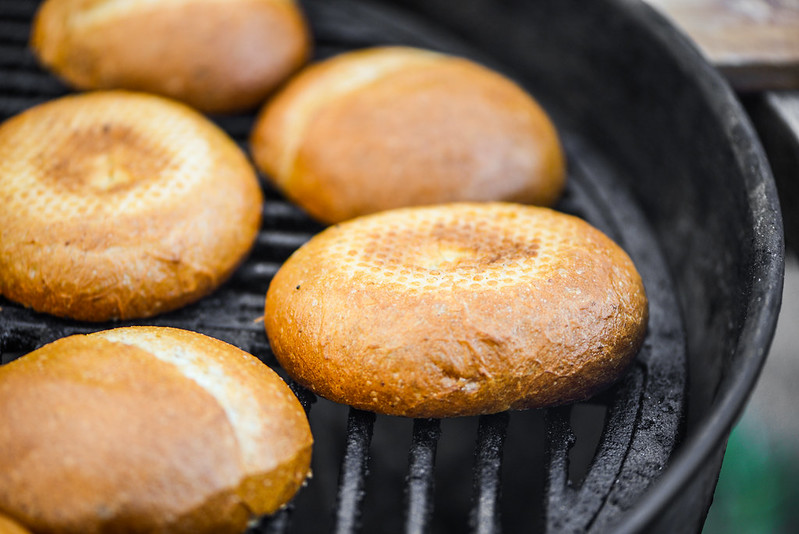 And now for what's become a standard PSA of mine—if you're making sandwiches on the grill, use that massive space and heat source to grill your bread! That bread in this scenario were Kaiser rolls, which I toasted over direct heat until lightly browned, warmed through, and a bit crusty. 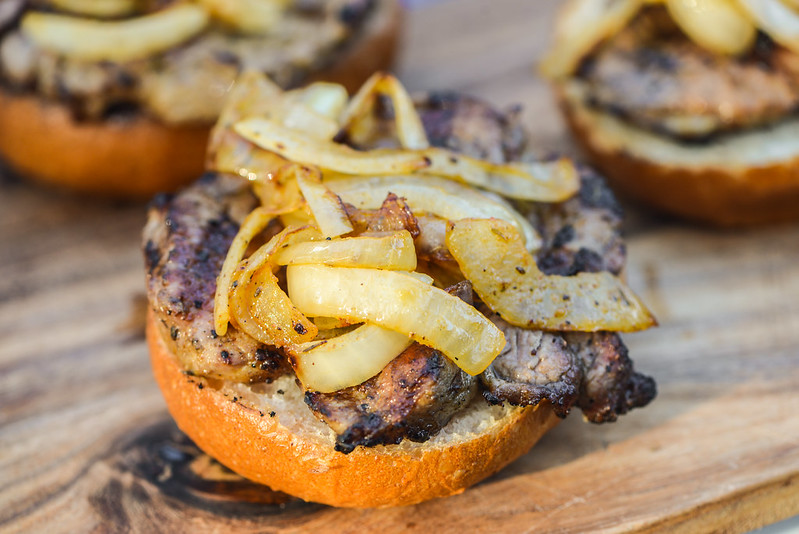 I then turned my three grilled elements into sandwiches by topping each bun with a pork steak or two and a portion of the onions. Whether they tasted good was still a question, but they certainly looked great and very meat forward, which is how I imagine a lot of German dishes are. 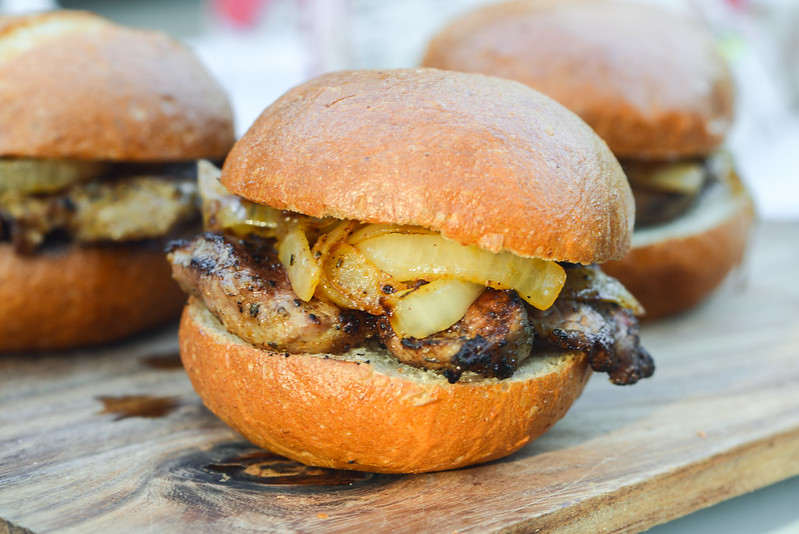 And the flavor was pretty great too. The marinade was powerful and lent a nice pungent and herbal profile to the meat and onions, along with a slight hit of heat. The pork itself was well cooked, but as I expected, there was a bit more chew to it than I'm used to. That's not to say that's a bad thing—there was no bit of this sandwich that was inedible—it was just different, and what I assume is all part of the experience. My main point of contention was the sandwiches felt a tad dry when taken altogether, but that's something a little spread of mustard or mayo could easily fix, and I would add that in if I were making these again. All-in-all though, they provided the non-wurst dish I was looking for and introduced me to something new that I now must seek out and try to see what real deal schwenkbraten is all about.