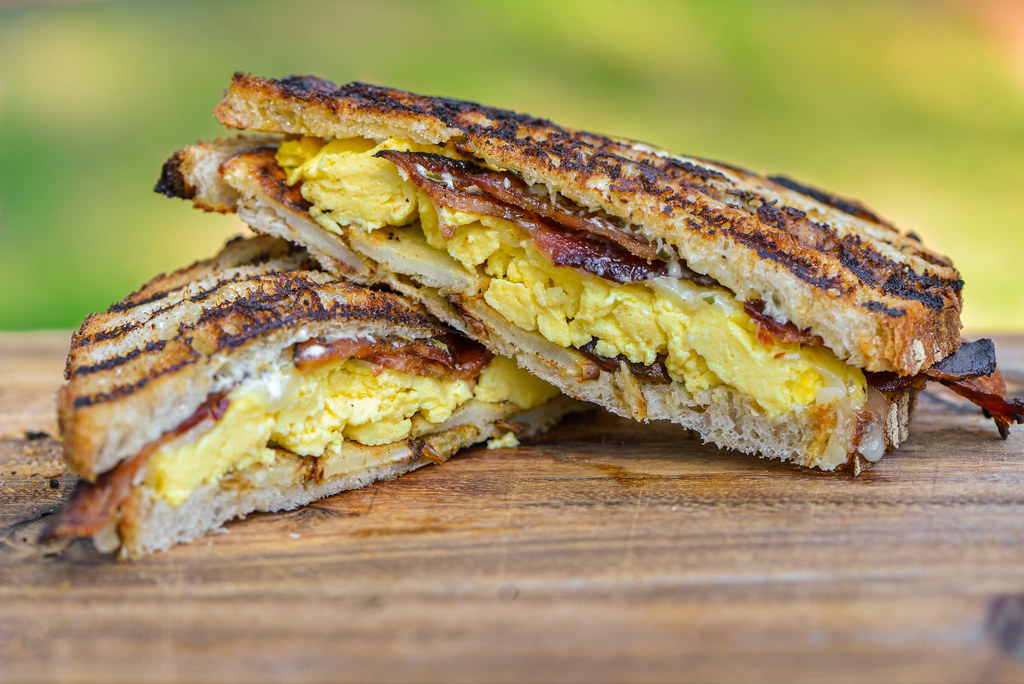 With an ample amount of homemade bacon now hand, I was looking for ways to put it to good use. These grilled potato and bacon paninis certainly did that and also let me add to my woefully small breakfast recipe collection. I'm sure a lot of you are like me and don't think of taking to the flames the first thing in the morning, but these sandwiches proved that I need to find the motivation to do that more often because there's a lot of untapped grilling potential I'm missing out on. 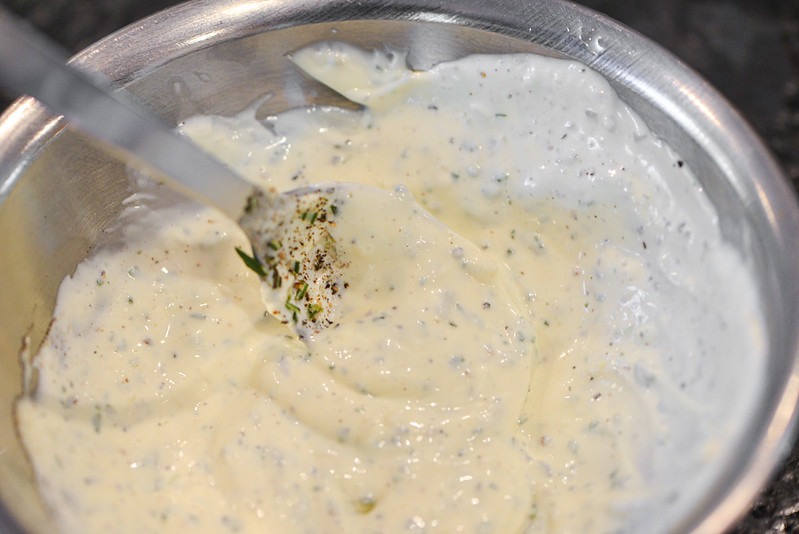 While this recipe technically started with the curing and smoking of spice-rubbed bacon, I did that and froze the bacon slices way before I even conceived of this sandwich. On the actual panini cooking day, the first thing I did that morning was make a rosemary-garlic mayo to serve as the sauce. In a normal recipe I usually tout making mayonnaise from scratch, but let's face it, you're already putting in extra effort to cook outdoors in the morning, why make the process take more time than it needs to when using mayo out the jar will churn out more than decent results. 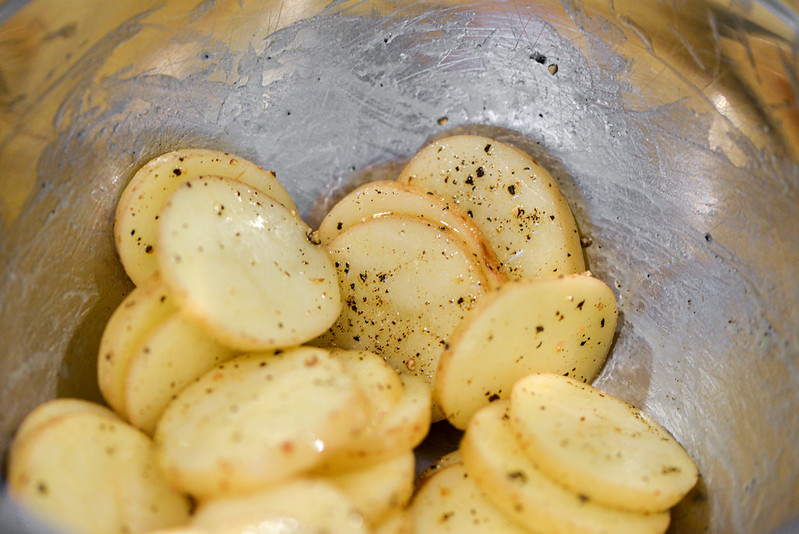 When I decided to feature potatoes in these paninis, I didn't want to wait for a long roasting time, which is common for spuds. So to avoid that, and also increase crispy surface area, I cut these small Yukon golds into quarter-inch slices before tossing them with oil, salt, and pepper to get them prepared for grilling. 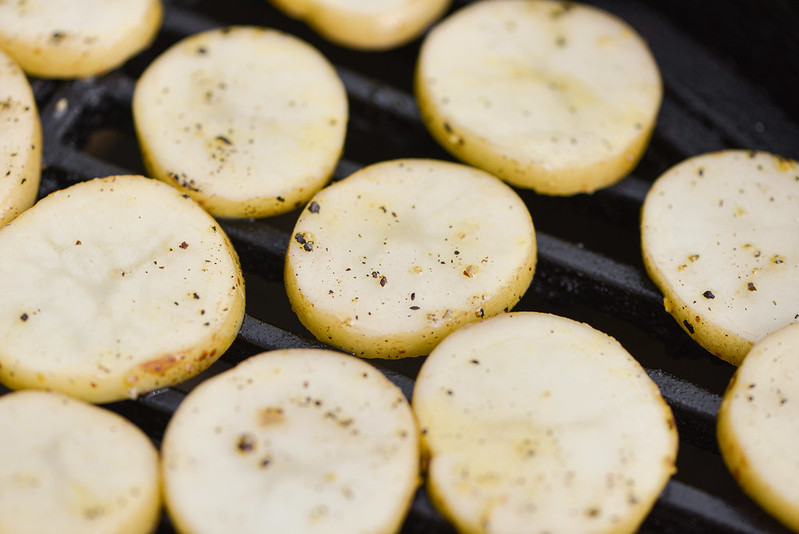 I then place the potatoes close to, but not directly over, a two-zone fire to cook. Where larger potatoes pieces can take upwards of 30 to 40 minutes to become tender throughout, I hoped these would clock in at a more manageable ten to fifteen minutes. 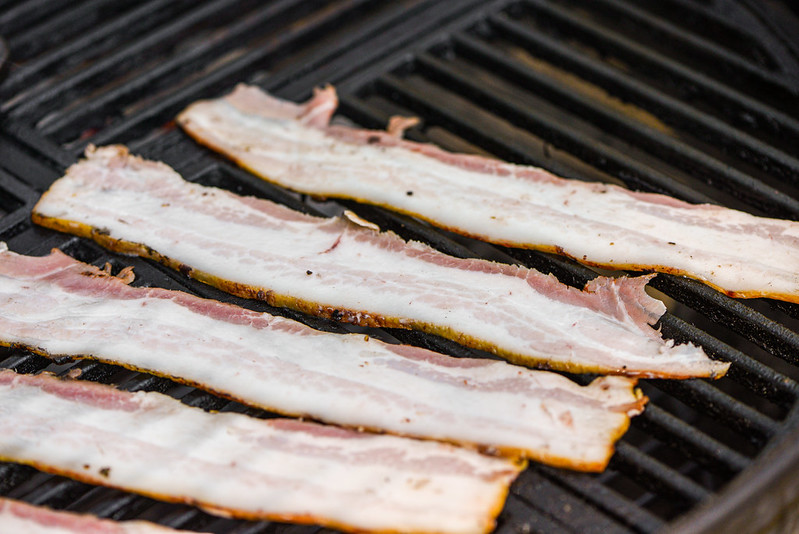 Ten minutes is also the amount of time is usually takes for me to grill bacon, so I utilized the extra free space over indirect heat and placed strips of bacon there. I was cooking for only two people, so I was afforded this convenience, but if you're making the full recipe for four, you'll probably find you'll have to cook the spuds and bacon in batches due to capacity constraints. It doesn't really matter which one you do first because they'll both get heated up again when it's panini pressing time. 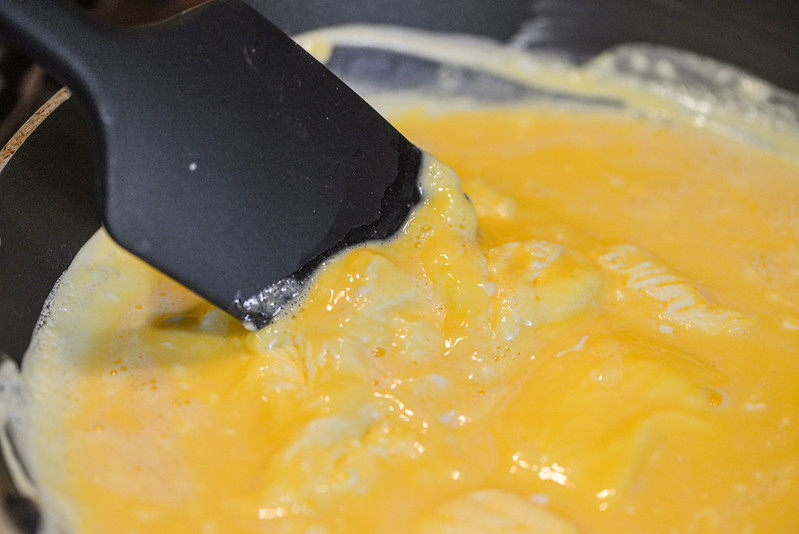 I feel like it would be a sin to make a breakfast sandwich without eggs, but I had an extra consideration for the eggs going into this sandwich since they'd essentially be cooked again when made into a panini. Because of that, I opted for scrambled where I could add sour cream into the mix for both added flavor and moisture. I also undercooked the eggs a little so they wouldn't turn out dry and hard in the final sandwich. 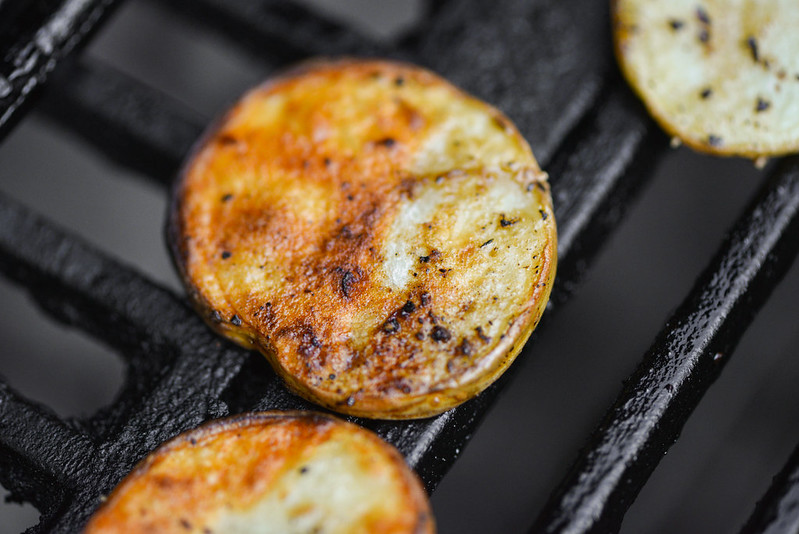 Since scrambled eggs only take a few minutes tops to make, I actually ducked inside while the potatoes and bacon were cooking to whip them up. Once they were done, I went outside and happily found that most of my potatoes and bacon were close to ready. After some rearranging for even cooking and a little extra time, both were done, with the bacon being fully cooked first and the potatoes becoming nicely browned and perfectly tender just a few minutes later. 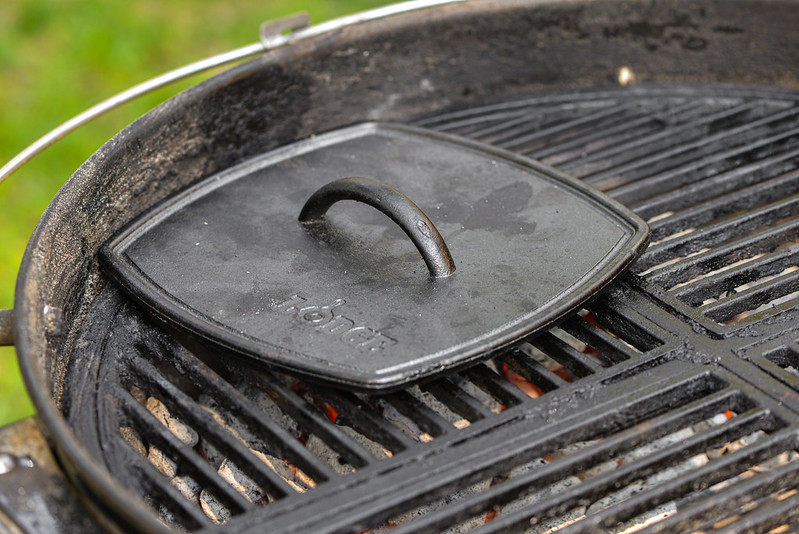 I did make a mistake in these panini though by super heating my press. I put it on the grill before I began cooking the potatoes and bacon, and by the time I went to press the sandwiches, it was so hot that it burnt the bread almost instantly. Any press or brick you use for making the paninis does need to be pre-heated though, so I adjusted the recipe to do this during the panini assembly—the five minutes that will probably take should be enough time to heat up the press to a more desirable temperature. 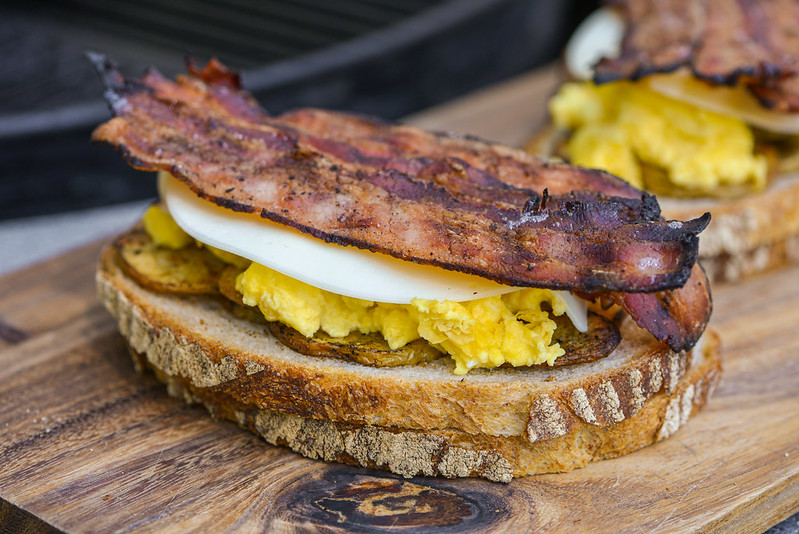 In an ideal world, I would have gotten some sandwich-size ciabatta rolls—a heartier bread well suited for panini making. I did this recipe during peak quarantine times and my local bakery didn't have what I needed that day and I wasn't about to run around town to find the perfect bread, so I used a crusty, rustic sourdough loaf instead. Assembly comprised of a layer of potatoes, eggs, sharp provolone, bacon, and a spread of the mayo. 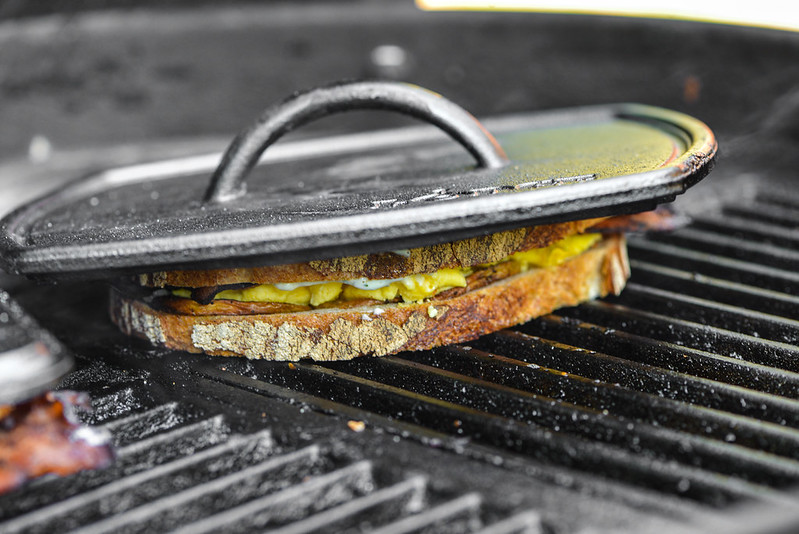 A medium heat is best for panini making, and luckily in the time it took to cook the ingredients and then assemble the sandwiches, the fire was down into the right 350-375°F range. I placed the sandwiches close to, but not directly over, the fire and then used my welding gloves to safely put the presses in place. I then covered and let paninis cook. In a normal scenario it can take a three to five minutes for the sandwiches to fully heat up, compress, and get crusty, but as I said, I super heated my press, so this was done in a minute with some burning of the bread, which isn't my usual panini experience. 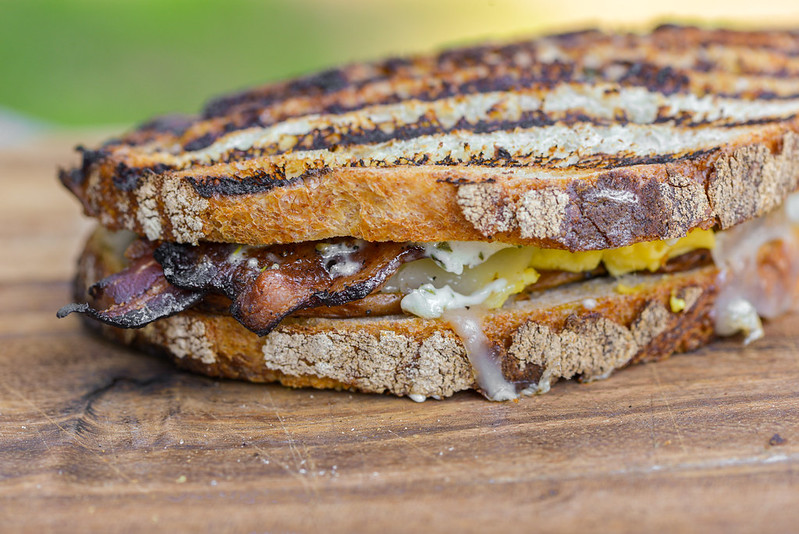 The job got done though, and I had one great breakfast awaiting me. I was kind of surprised how flavorful these ended up being. With eggs and potatoes being the main components, I was expecting a lighter flavor, but the sharp provolone really lent a bite that paired well with the also strong rosemary and salty bacon. So the crisp potatoes and creamy eggs really provided the mellowing contrasts, and taken altogether, it tasted incredible. It certainly made me think I need to stop being lazy and get out and grill more breakfasts because if this is an example of what's possible, there's a whole world of amazing recipes I've yet to unearth and share.