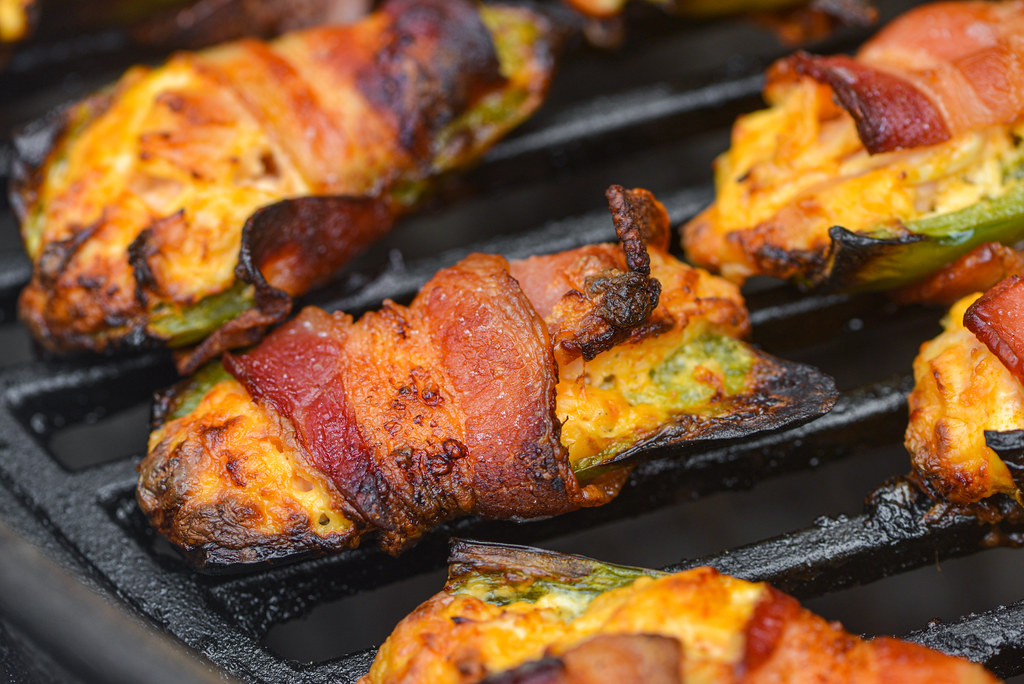 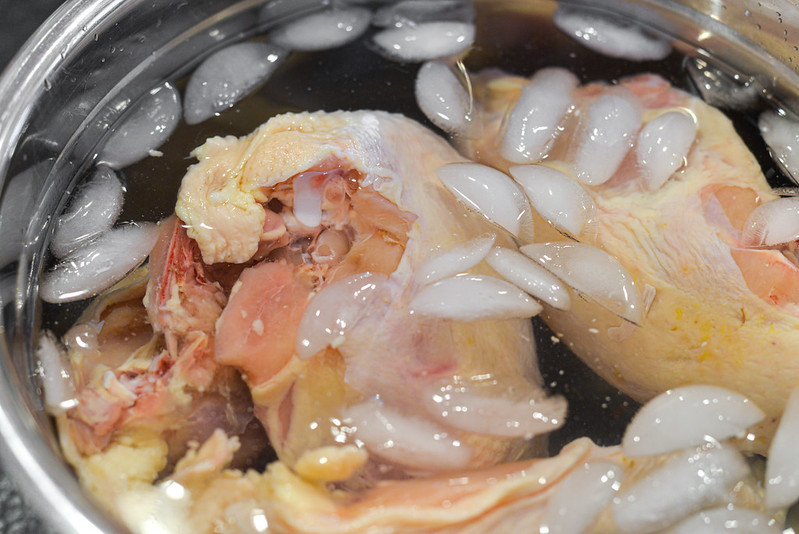 Seems like chicken is the right place to start off Buffalo chicken recipe. While you would be well served by just picking up and pulling a rotisserie bird from the grocery for this, I decided to go for gold and actually smoke my chicken first. I've shied away from wet brining meat in recent years, preferring dry brining and cooking to lower temperatures for improved flavor. However, in this particular scenario, where the chicken was going to gain a lot of flavor from the smoke and dip, and also needed to survive being cooked twice, I thought the added moisture wet brining provides was called for in this instance. 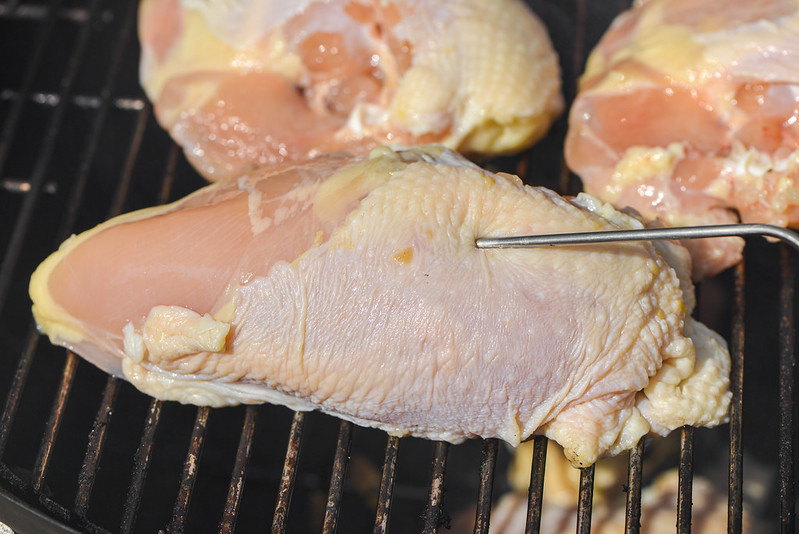 After I had brined the breasts for 30 minutes, I pat them dry and moved them to a smoker I had running at 225°F. While I normally use a couple chunks of a medium smoking wood for most meats, I deliberately went lighter on the smoke for this recipe, using just one chunk of apple wood on top of the coals. Smoke can be a heavy handed seasoning if you're not careful, and with a very light meat like chicken breasts, just a little can go a long way. 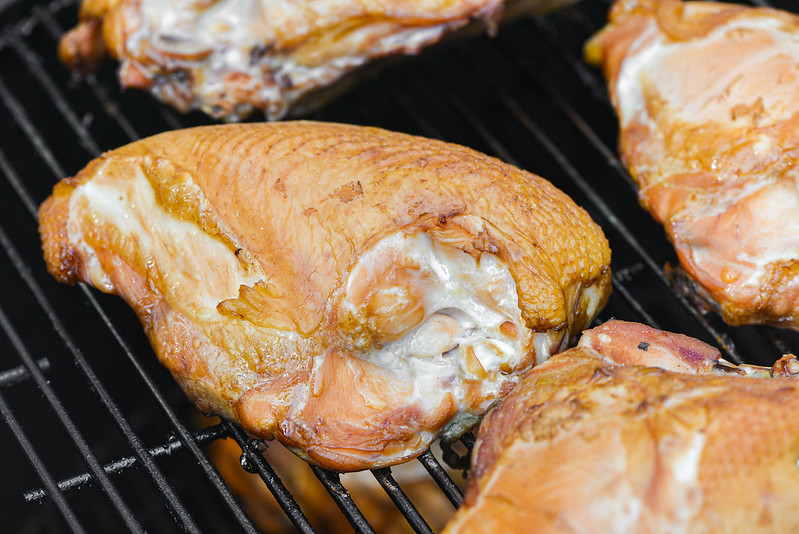 And chicken breasts can take some time to cook, so a fair amount of smoke can end up being absorbed. While these breasts weren't all that big, running at a low temperature, they took an hour and half to reach the 145°F internal temperature I was shooting for. Once done, I let the chicken cool for a bit prior to pulling to meat from the bone. 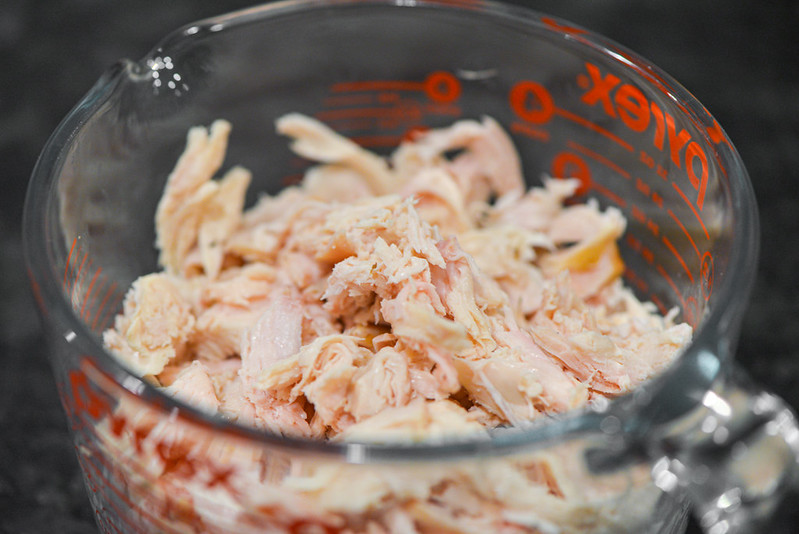 The brining seemed to have paid off on initial impression, as these were some of the juiciest chicken breasts I had ever pulled. That left me with a lot of confidence that this recipe was heading in the right direction in its initial stages. 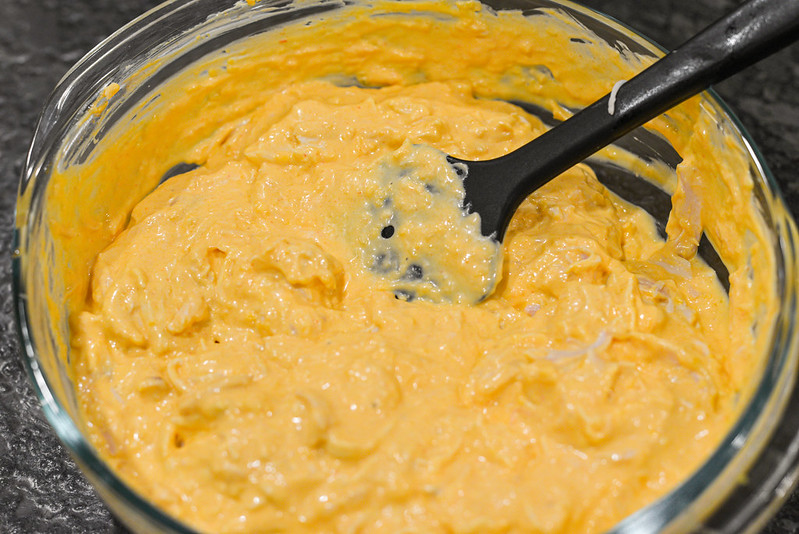 For the dip, I didn't see any reason to do anything out of the ordinary from the standard Buffalo chicken dip recipe, which has the right flavor and consistancy I was after for a filling. If you haven't made this dip before, it brings together cream cheese, Frank's hot sauce, cheddar, ranch dressing, and the chicken. Just like Buffalo wings, this dip is highly addictive with its spicy and rich flavor. 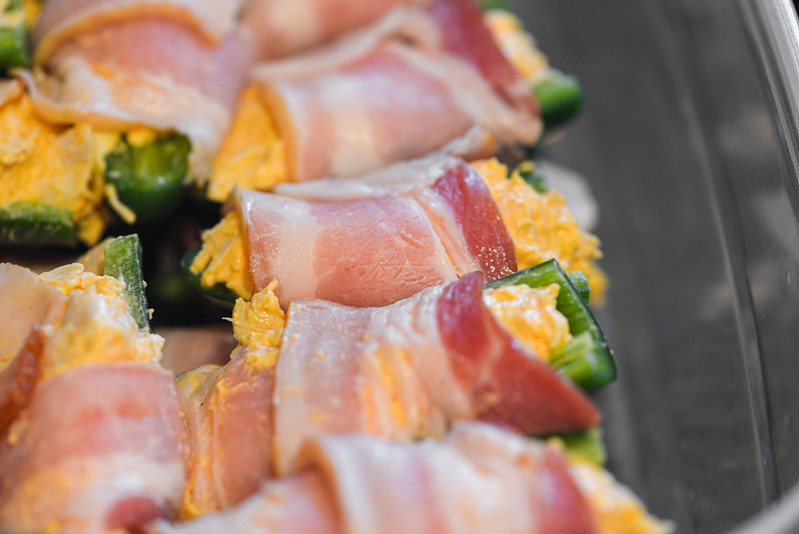 Once the dip was done, I moved on to popper assembly, I had picked up about 20 jalapeños that I had stemmed, halved, and seeded before filling each half with a helping of the Buffalo dip. I then proceeded to wrap each stuffed jalapeño with half a slice of bacon. In my earlier popper days, I used 1/3 a slice of bacon and secured it with a toothpick, but using more bacon not only tastes better, it doesn't require the added insurance of a toothpick to keep it in place since a couple wraps around the fruit usually is enough for it keep clinging in place as it cooks. 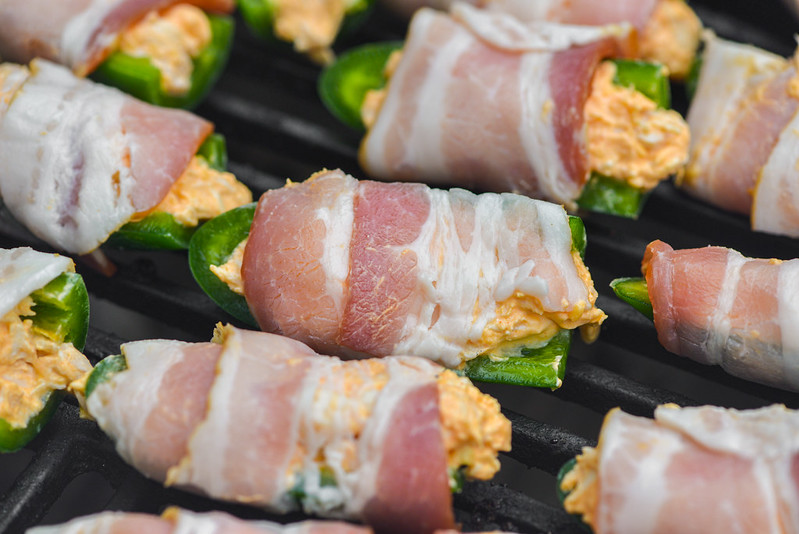 This is a grilling blog, so it should come as no surprise that I grilled these babies. You can, of course, use your oven set to 425°F and rest the poppers on a wire rack placed in a baking sheet, but if you have a grill, there's some distinct advantages to using it: more cooking space, keeping the smell of cooking bacon outside, and bonus grilled flavor. 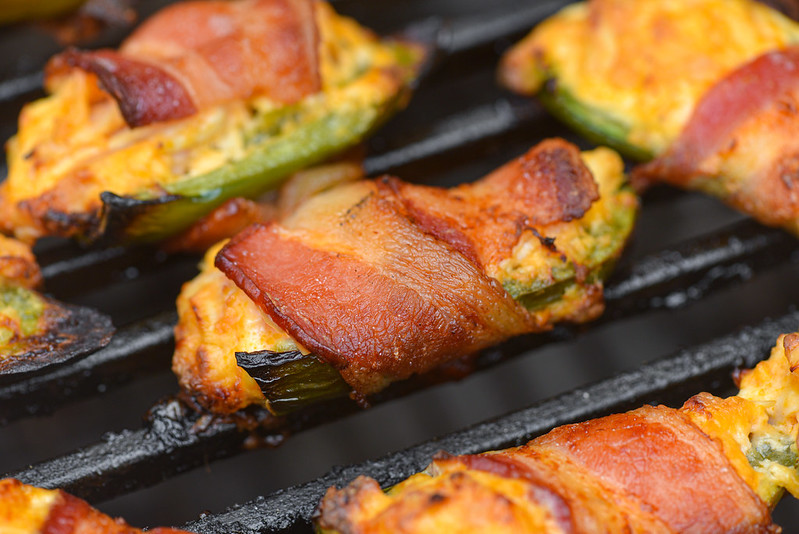 Since the chicken was already fully cooked, I measured doneness by the looks of the bacon—I wanted that cured pork belly well browned before serving. It took about 30 minutes over indirect high heat for the bacon to reach that stage, at which time the filling was undoubtedly hot and the jalapeños were nice and soft. 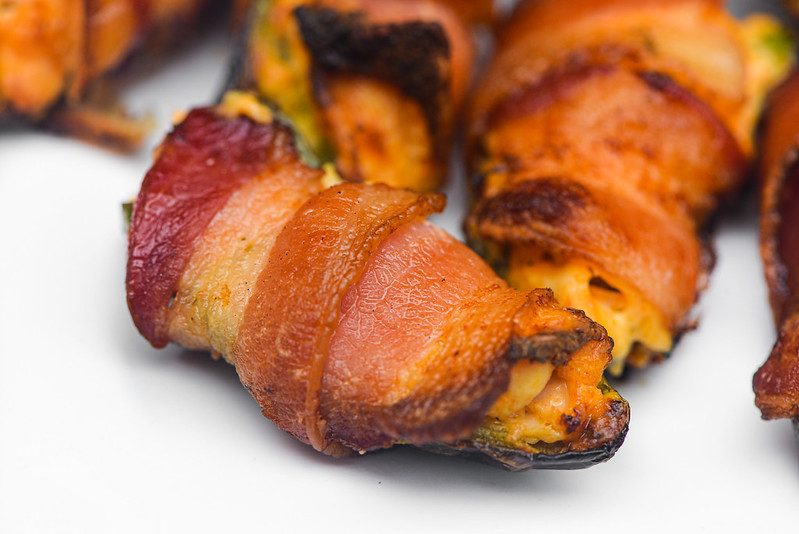 At the outset of this recipe, my main worry was the double dose of heat would be overkill, but that definitely was not the case when biting into one of these. Yes, the plain cream cheese jalapeño poppers deliver a more straightforward and cleaner flavor, but the Buffalo chicken stuffing made them all the more interesting to me. The multiple layers of heat were a boon, not a fault, as the Frank's had a very different taste than the fruity jalapeño which melded with the cream cheese, ranch, and cheddar to mellow its heat output significantly. Also, like using sausage or lil smokies in past incarnations, the chicken added a heartiness to the poppers that made them more filling, leading to a similar scaled recipe to result in more servings than standard jalapeño poppers. This appetizer ended up being a really harmonious marriage of two classic party foods to make one mega party food, which is a good thing to have in your arsenal as we head into the prime holiday and football season.