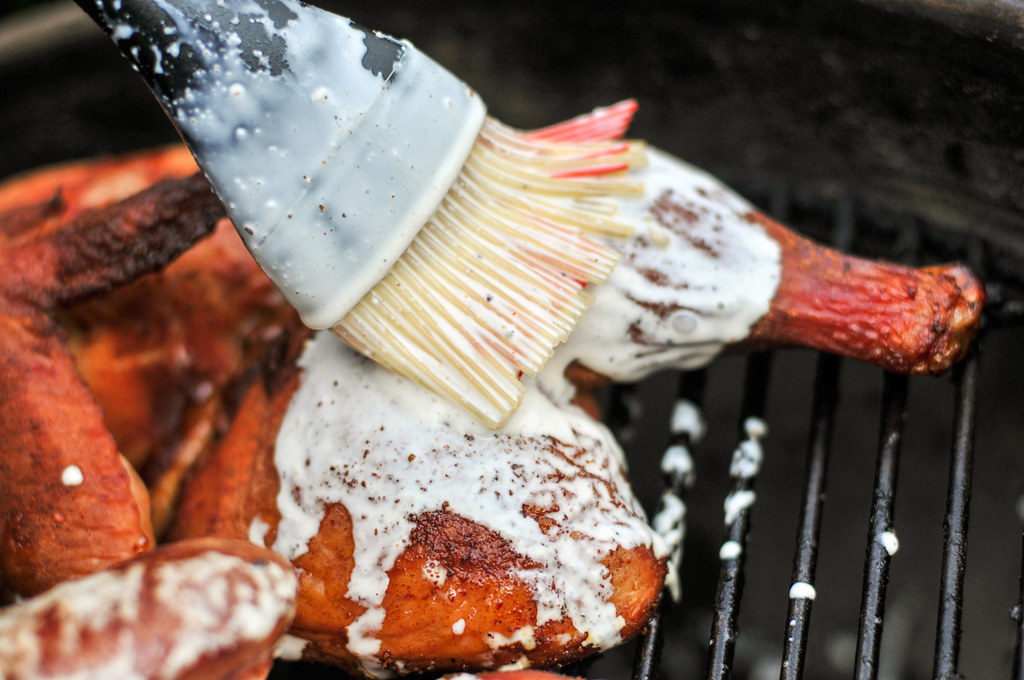 Believe or not, before I started grilling, my diet consisted of almost entirely chicken, pizza, and ham (ok, throw some Hot Pockets in there for good measure). I grew up pretty food adverse—that guy who needed a restaurant with some form of fried chicken on the menu in order to eat. It was grilling that got me out of that shell, but my early years of cooking still veered heavily on the familiar. That meant a lot of chicken, and smoked chicken with a white barbecue sauce was one of those things I found comfort in. While the eater I was wouldn't recognize the eater I have become, I still find myself back at where I started from time to time, but luckily the years of experience have also made those blasts from the past all the better. 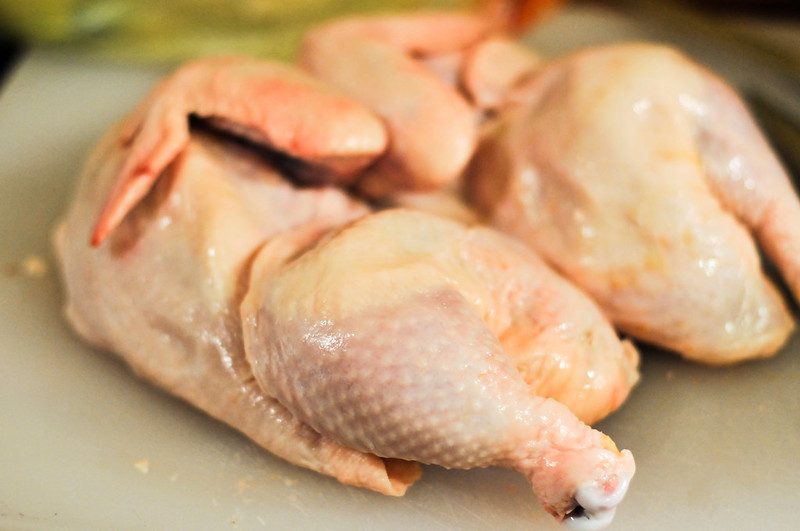 I first made this smoked chicken from a recipe out of my most beloved cookbook, Peace, Love, and Barbecue. It's a rather simple process of slow smoking a bird, then "baptizing" it in a bucket of white barbecue sauce. This is a staple of Northern Alabama—where white barbecue sauce was invented by Robert Gibson at Big Bob Gibson's Bar-B-Q in Decatur. Now I don't argue they have their process down to perfection, but over the years I've adjusted my smoked chicken recipe to get what I consider even better results for the backyard. 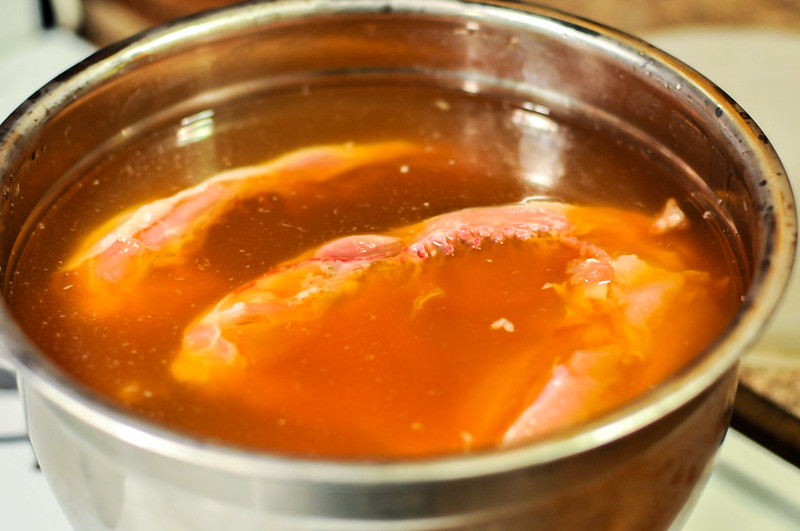 First, a butterflied or halved bird is set in a brine. Not content with the standard salt water mixture, I've come up with an apple juice-based brine that adds not only moisture, but flavor to the chicken as well. Although laden with sugar from the juice, brown sugar, and molasses, the brined bird picks up just hints of sweetness that makes a big difference in the end. 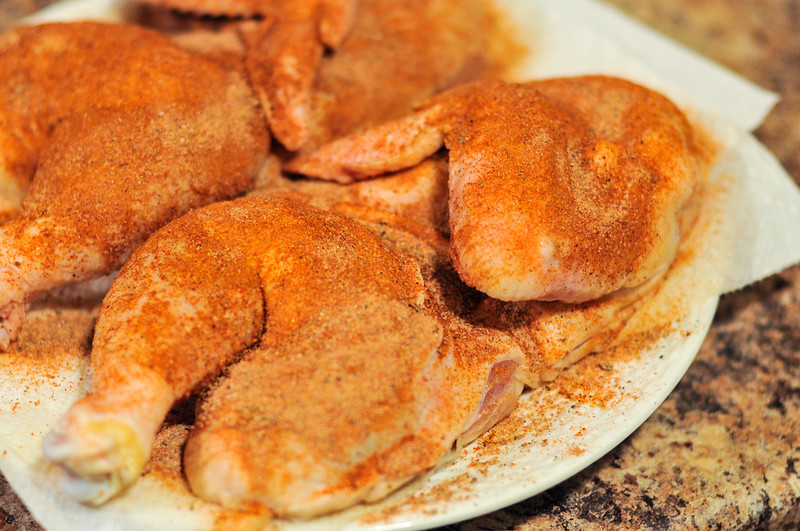 After brined, the bird is patted dry and covered with a barbecue rub. I used my new "secret" Meatwave rub, but any of your favorites will do just fine. In all honesty, I actually meant not to rub down these birds, but a rub is so second nature that it wasn't until I had the chicken coated that I realized my error, which ended up being more of blessing. 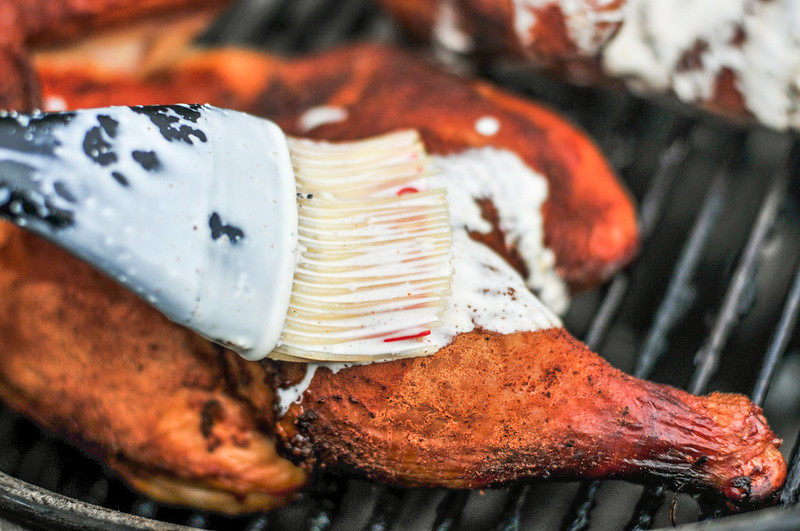 My biggest gripe with barbecue chicken is that I don't think low-and-slow is the best cooking method. Unlike pork shoulder, ribs, or brisket, which all have a lot of connective tissue and fat that requires low temperature to properly break down, chicken is comparatively lean and doesn't benefit in a long and low cook in the same way. On top of that, low temperature and increased exposure to smoke has almost always resulted in flabby, slightly rubbery skin and overly smokey meat. So instead, I like to pump up the temperature and scale back the smoke, cooking over indirect heat on a medium-hot grill with just a chunk of a light smoking wood, like apple or cherry. With this, I get the great combo of juicy meat, slightly crisp skin, and just enough smoke to impart flavor, but not overpower the delicate meat. 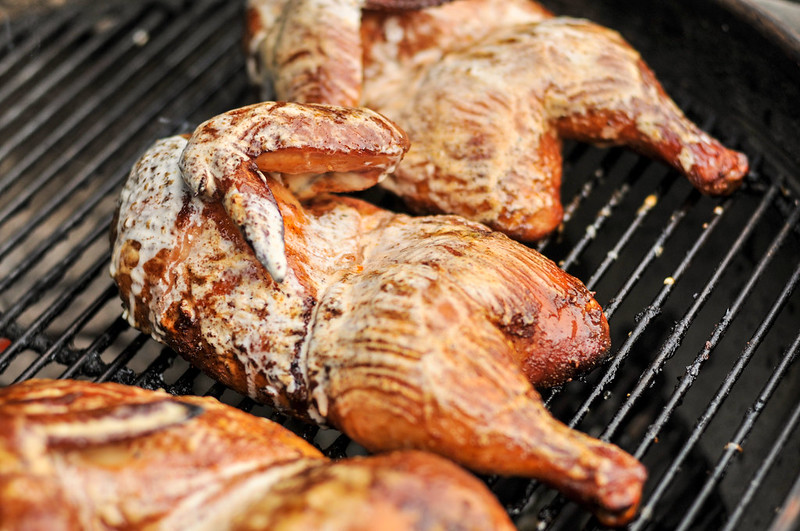 Really, a bird cooked this way is good enough right off the grill, but if you haven't tried it with white barbecue sauce, you're doing yourself a disservice.

Unlike tomato based sauces, which sit on top of the skin, a white sauce— primarily a mixture of mayonnaise, vinegar, salt, and pepper—soaks into the skin and meat, deeply embedding it's tangy character into the chicken. 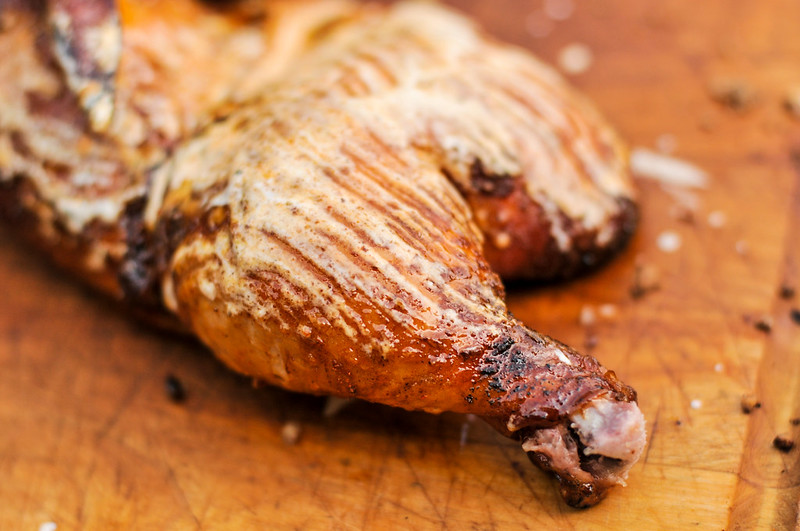 Admittedly, a finishing with white sauce may not leave the most attractive of birds, but it does create one of the tastiest. All the flavors worked through in this process come together into one fantastic piece of chicken. The brine creates a juicy and slightly sweet meat, which is contrasted with the spiciness of the rub and the ubiquitous barbecue tang delivered by the final brushing of white sauce. When cooking up these birds, I also had some practice competition thighs going, and there was unanimous preference for the white sauce chicken against the more standard red sauced thighs (both were done with the same brine and rub). While the red sauce may have reminded me more of the foods I once limited myself to eating, the white sauce combined part of that old comfort with my expanded palate to form a chicken that I know is something very special.