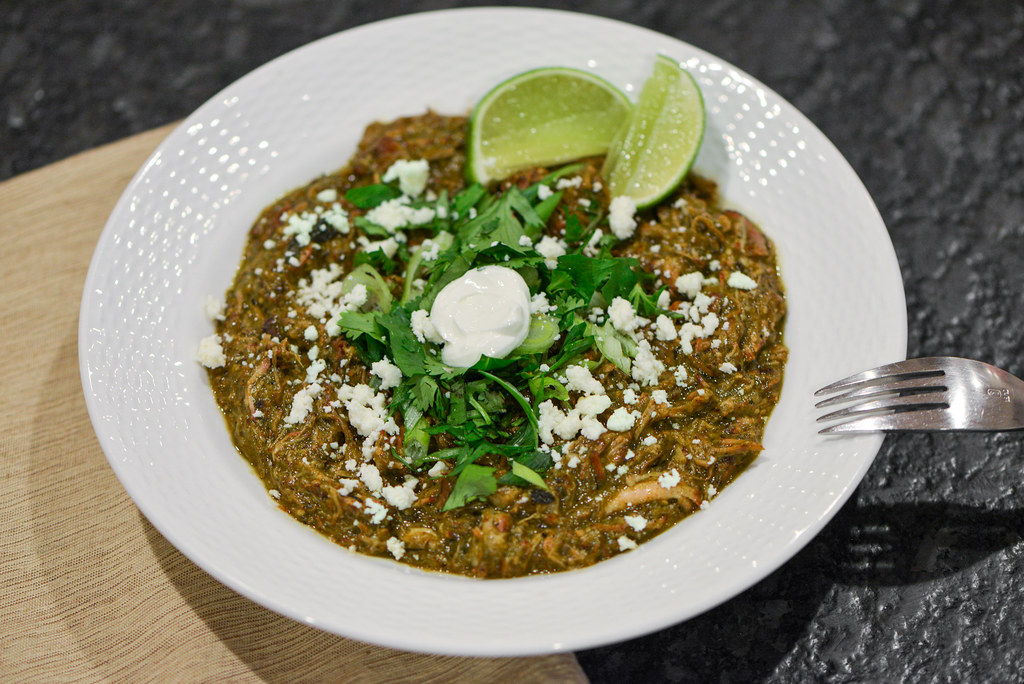 After a series of successful chili dishes that were enhanced by utilizing smoked meats, I felt like I was on a roll and should keep the trend going. Those previous creations were all beef-based and revolved around rich, earthy, and spicy Texas-style chili, so for my next shot at the genre, I moved a little west and took influence from New Mexican chili verde, which still delivers a complex character with a good touch of heat, but in a manner that has a brighter and fresher flavor. And, once again, I found the addition of smoke only to be a positive in enhancing the overall flavor. 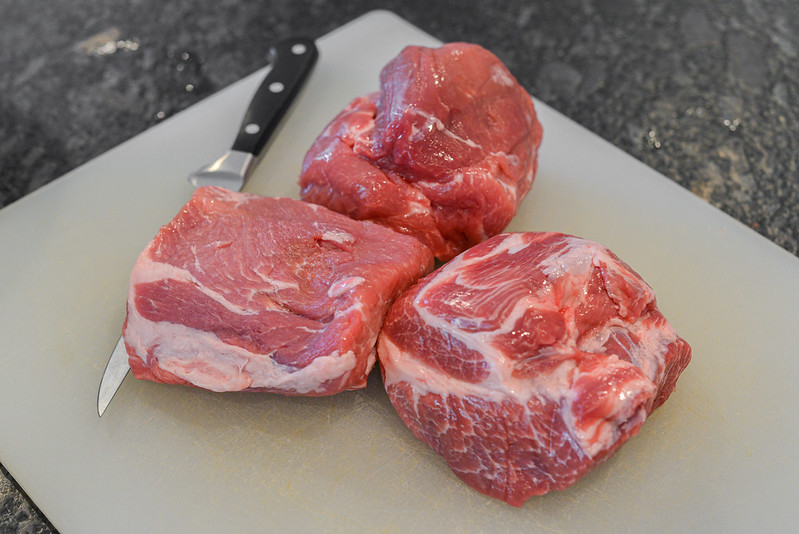 This chili trend of mine came about because I had a lot of excess smoked brisket on hand and was looking for good uses for it. This recipe diverges from that as it was more purpose built to be a chili from start to finish. The main procedure remained the same—smoke the meat, then braise it—but I was able to think of ways to better cook the meat for the final dish. For the chili verde, I went with the standard pork shoulder that I prepped into large two-inch chunks to allow more surface area for the smoke to embed in. 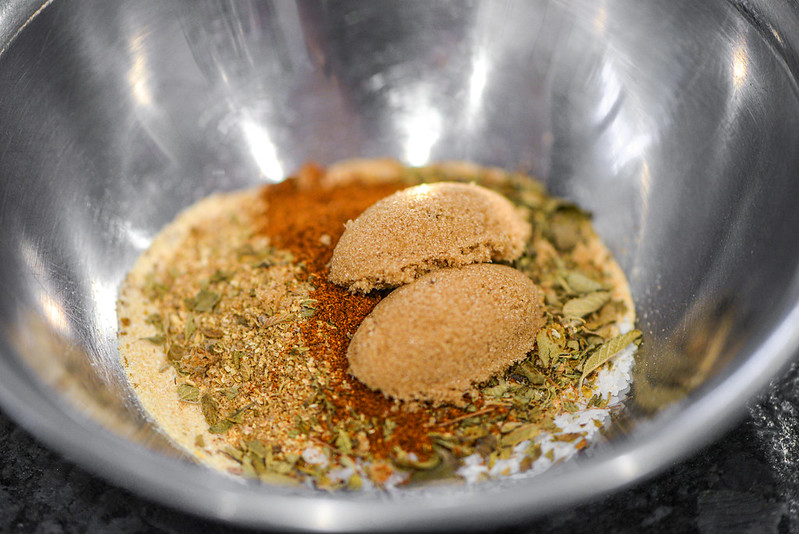 I also created a rub that was specifically meant to pair with the bright flavors of the green chili sauce, adding touches of sweet sugar, earthy cumin, sharp garlic, and onion that would be at home in the final stew. 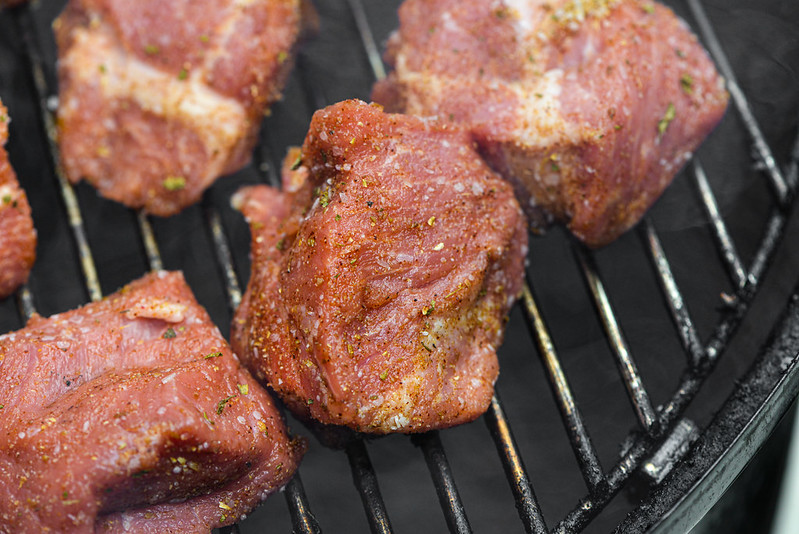 To finish the pork prep, I placed all of the cubes in a large bowl and poured in the seasoning, then tossed to coat all the meat evenly. Next, I transferred the pork to a smoker that I had running at 225°F with a large chunk of pecan wood tossed onto the coals. The initial phase of this cook was to embed the pork with a smokiness, and most of that happens in the first hour or two of cooking, so two hours ended up being the total time I decided to go with in this first cook. 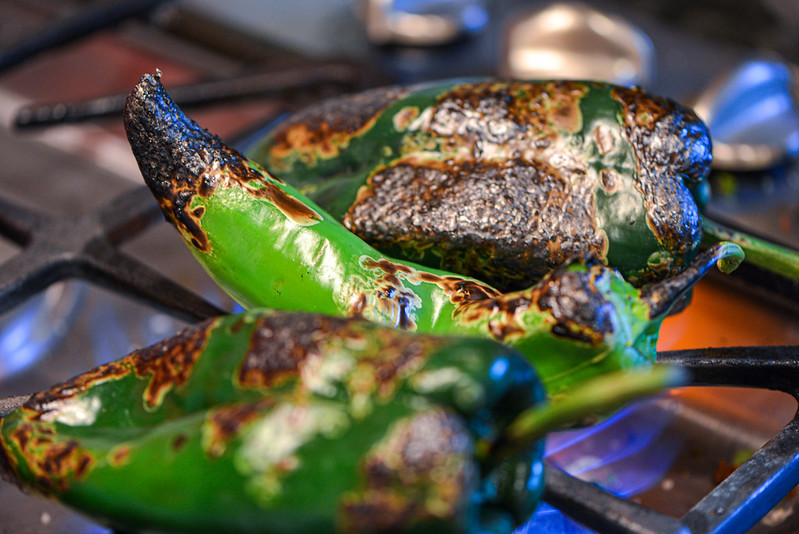 A couple hours also provided ample opportunity to put together the chili braise. In the Southwest, you'll mainly find this variety of chili made with Hatch chiles, but I didn't have a source for those, so I went with a trio of green peppers—poblano, Anaheim, and jalapeño. I roasted all of them on the stovetop until they were charred all over, then transferred them to a large bowl, covered, and let them steam until cool enough to handle. 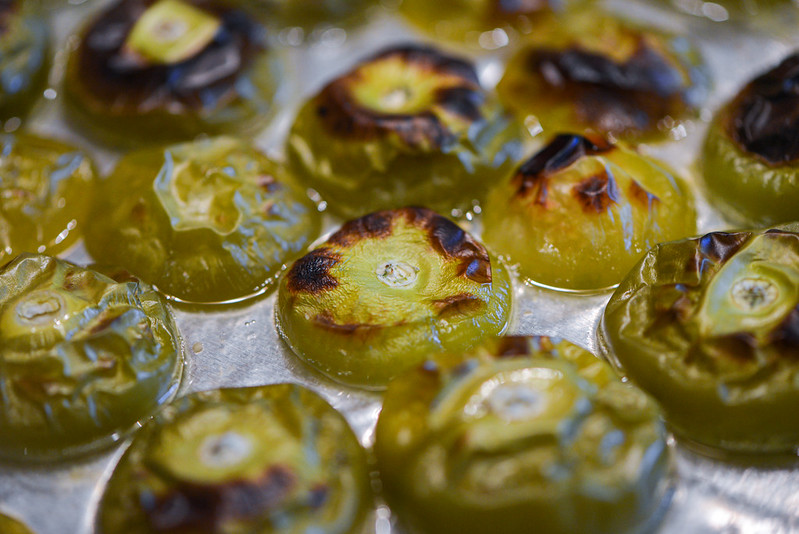 During that down time, I roasted the required tart tomatillos by first removing their husks, washing, and halving them horizontally. I placed all the tomatillos cut side down on a baking sheet and then placed them under the broiler and let them cook until they completely softened and charred on the top. Once done, they got moved into the jar of a blender. 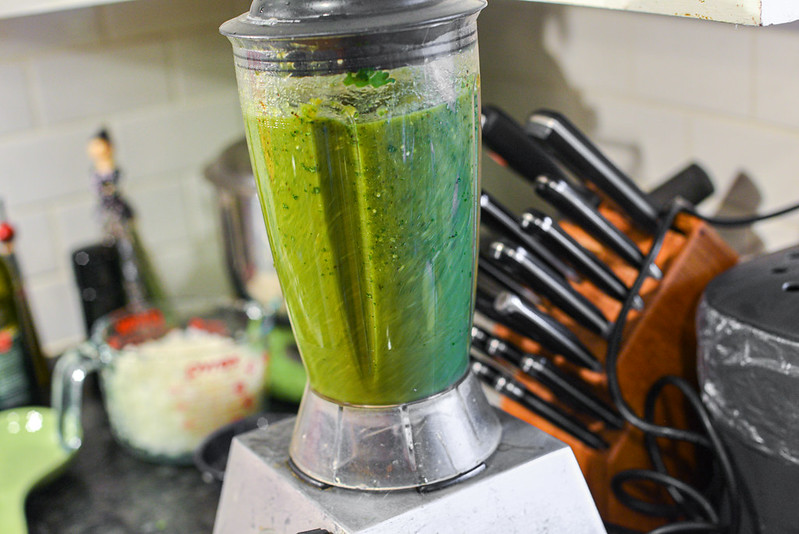 By now, the peppers were cool enough to handle, so I removed the skins, stemmed, and seeded each one and placed them all in the blender with the tomatillos and added in a couple handfuls of fresh cilantro. That all got pureed until smooth to form the green base to this chili recipe. 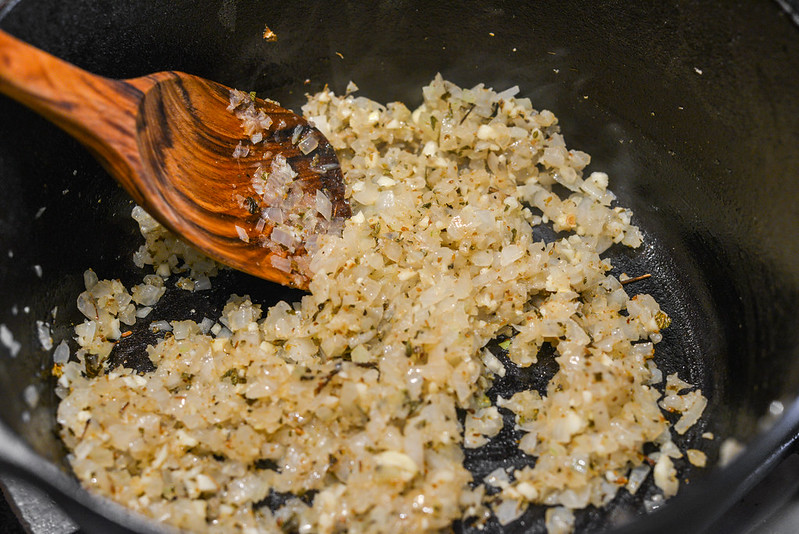 Next I sautéed a large diced onion in the Dutch oven that I was going to cook the chili in. Once the onions began to brown, I added in garlic, cumin, and oregano and let those cook until their aroma was present. The chili mixture went in next, along with chicken stock, and I brought the entire thing to a boil, then reduce the heat to merely kept the liquid warm until the pork hit the two hour mark in the smoker. 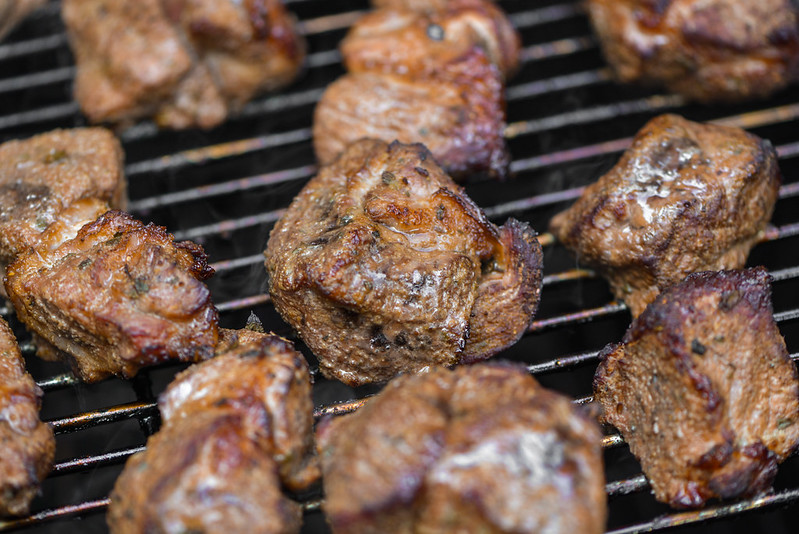 By that time, the cubes of meat had picked up an attractive color, but when squeezed with tongs, they were still quite firm and tough. The braising that was coming next was how they were going to be rendered properly tender, so I transferred all the pieces into the Dutch oven, then set it inside the smoker, positioning the lid to be slightly ajar, and covered the smoker to continue cooking. 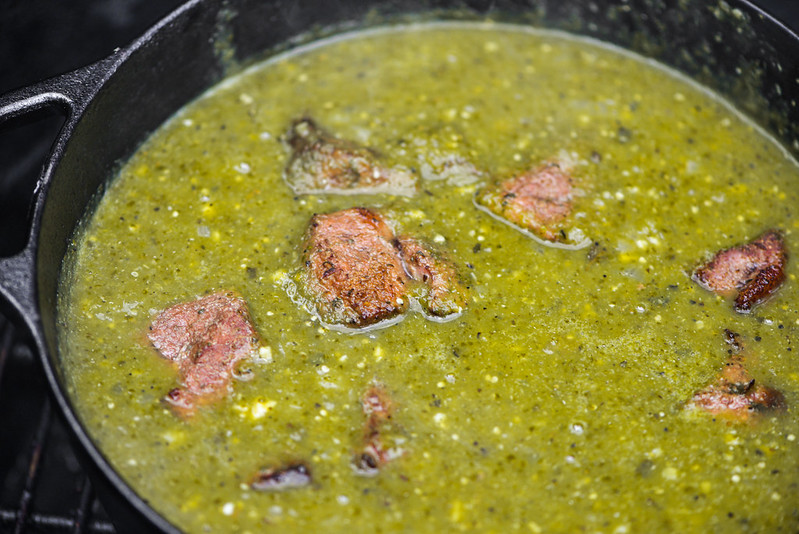 My brisket chilis only took about an hour for the meat to warm and start to fall apart, but that was with fully smoked beef, so I assumed this would take longer since the pork was only partially cooked. I started checking around the two hour mark, but the pork didn't start to have that falling apart quality until around three hours in. The sauce was not reducing much though, so instead of leaving the pot in the smoker to finish up, I chose to bring it inside so I could get the liquid to a boil so it would reduce and thicken more quickly. 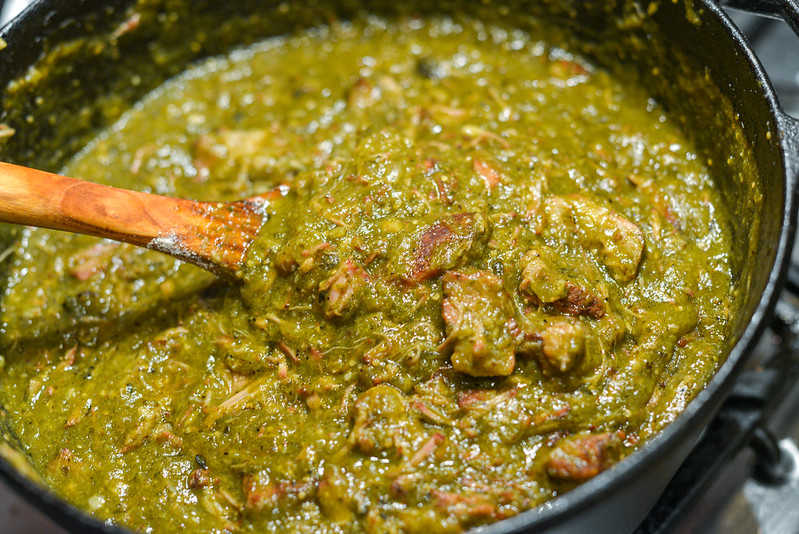 It took about thirty minutes of boiling for that to happen, and in that time, the tender pork really broke down and started to shred by merely stirring the pot. Not all the meat completely fell apart though, leaving some nice larger chunks for a textural contrast that I personally like in my all-meat chilis. 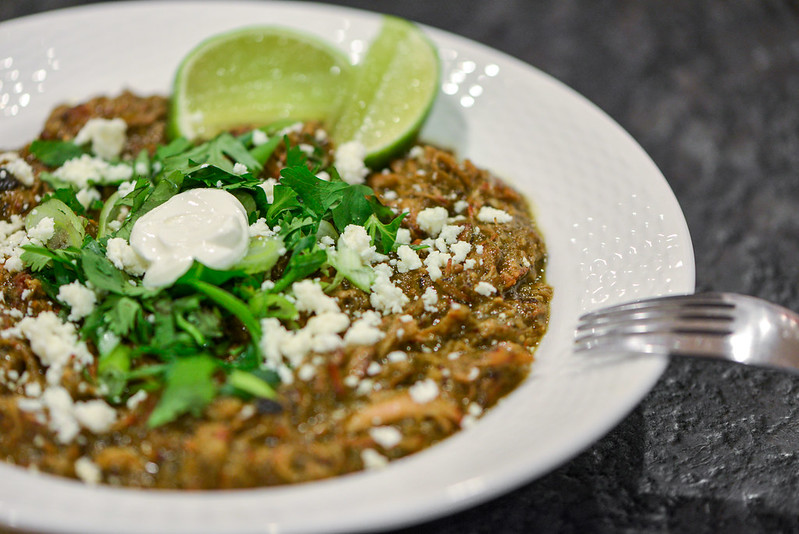 I added a splash of lime juice for a brightness at the end, and seasoned with salt before digging in. I really enjoyed the brisket chilis I had been making, but chili verde is actually what speaks to me more, so this was my favorite in the line of chili recipes to date. While the rich complexity of red beef chili is certainly comforting, this chili verde delivered that, but in a manner that had a fresher touch with a fruitiness that was more upfront and center. Because its flavor was not quite as heavy, I felt like the smoke had a bit more of presence as well, really separating this chili verde from the standard bearer. My only problem with this chili came when I went to have leftovers—the Fritos I had served on the first run were all gone, and chili just is not the same without them. So my bowl I used for photos went Frito-less, which is a shame, but my toppings of onion, scallion, cilantro, queso fresco, and sour cream still all served the chili verde well and made me a happy eater. 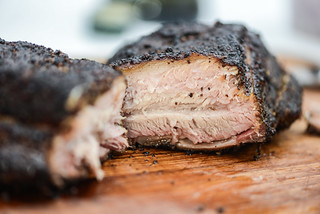