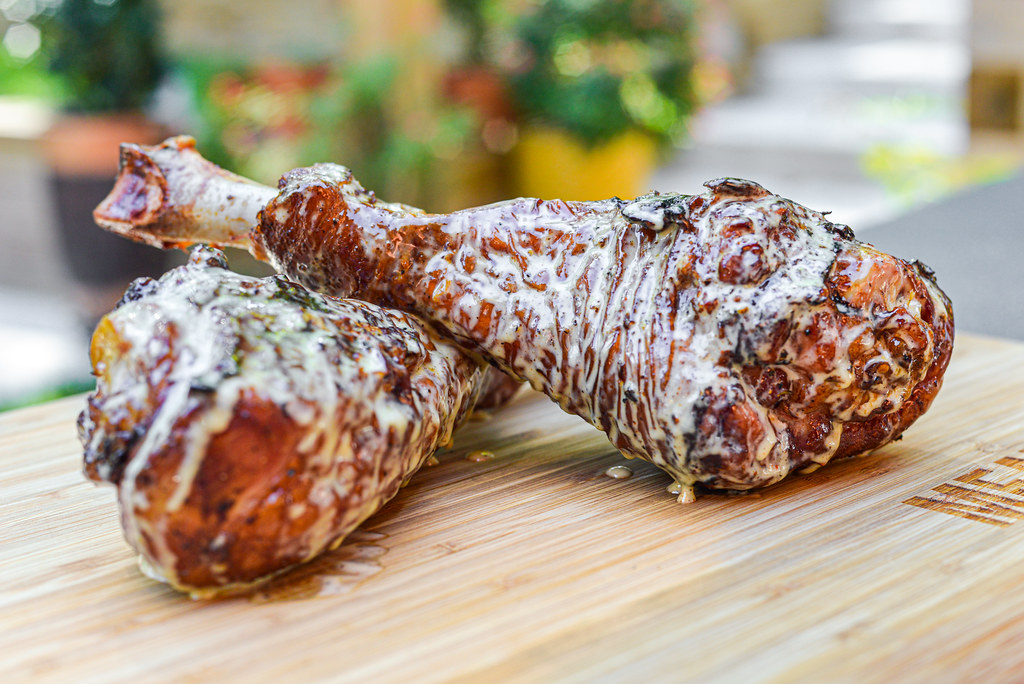 As a dish, turkey legs in and of itself is not something I've really been that into. I'm not talking about the dark meat from a whole roasted bird—I often do take the legs at Thanksgiving—but rather those monster sized grilled and/or smoked legs you see at Ren Fens, fairs, and amusement parks. They are quite a commitment and, when presented with the various other fried alternatives usually around, there's likely something else I'd rather be eating. That has led me to more-or-less ignore turkey legs on this site, save for the one recipe for an apple-brined version I did in my earlier years. Having some extra turkey legs on hand recently though made me give this dish another look, and with so many years of cooking know-how under my belt, I thought I could come up with something really great, and did with these smoked turkey legs finished with an Alabama white sauce. 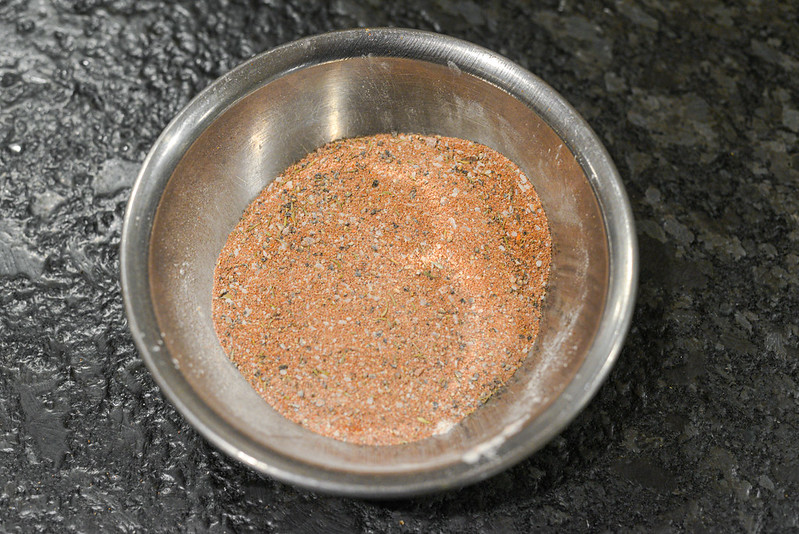 I've done numerous white sauced poultry recipes and I love the way this mayonnaise-based baste really enhances the richness of whatever it touches while not imparting as strong of a flavor as a standard barbecue sauce. Due to that, I like to pair it with a rub that has a lighter touch to get in some barbecue complexity without doing any wholesale overpowering of the white sauce. So I used a fairly standard spice mixture here with the heavy hitters scaled back a bit and a last minute addition of thyme, which I thought would go well with the turkey. I also mixed it a couple tablespoons of baking powder. That not-so-common ingredient helps create a textured and crisp skin, which was a primary goal in this recipe since turkey skin, especially smoked, can be a bit tough and unpleasant. 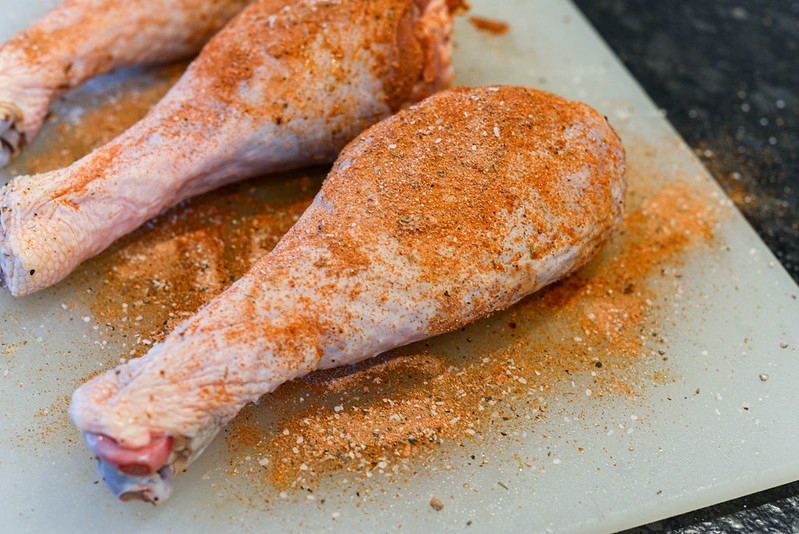 I had a whole turkey from a 2020 Thanksgiving that never was that I defrosted and divided into pieces. The legs from that bird were a reasonable size, which also made them not enough to feed the crowd I had coming over. So I needed to source turkey legs and that proved to be difficult outside of the Thanksgiving season when I made this recipe. The ones I did find were of the ginormous variety—I should have put one of the more standard sized turkey legs in the photo so you could see the full scale of these dino bones. After defrosting, prep was merely seasoning with the rub and then placing the legs on a wire rack set in a baking sheet, which I transferred to the fridge to air dry overnight. That drying out of the skin was the second important part of the recipe to hopefully get me a great skin. 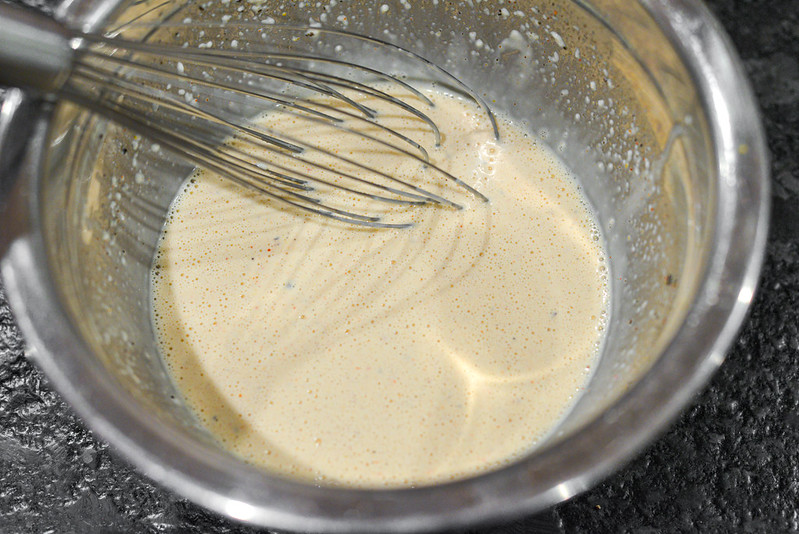 One nice thing about a mayo barbecue sauce is how easy it is to put together. Compared to other sauces I make, a white sauce has way less ingredients and requires no cooking. After years of trying white sauces for my reviews, I've found that I'm personally drawn to ones with a little sweetness and a peppery kick to go along with the extra-tangy mayo base, so this recipe is tailored to that flavor profile. 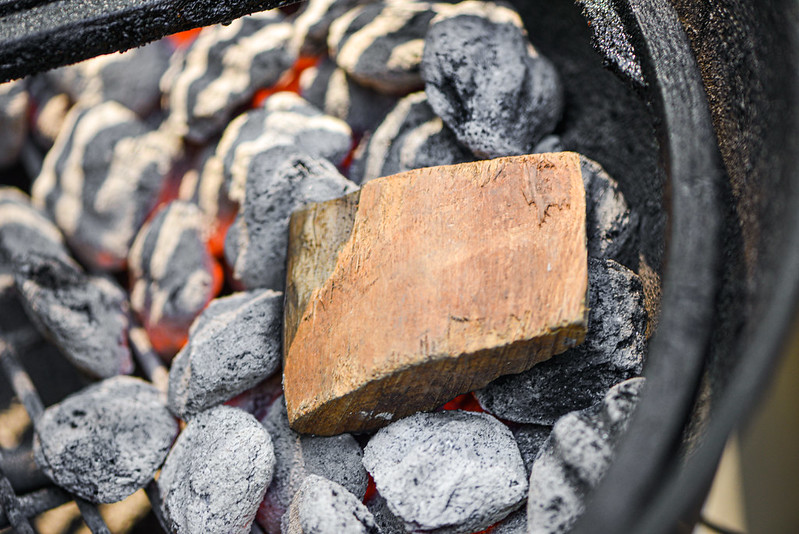 When it came to cooking, I definitely wanted these to be smoked, but almost all low-and-slow turkeys I've made come out with tough and leathery skin. So I opted for hot and fast, but with a chunk of apple wood tossed on the fire for an enhanced smokiness. 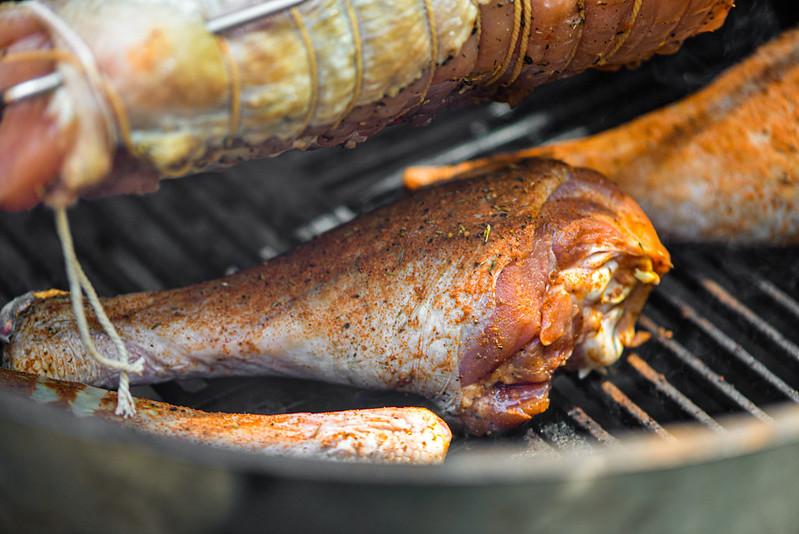 Since I didn't have to worry about any white meat, which can overcook and dry out before dark meat is done, I felt good going with a hot fire knowing that the legs were well suited take the heat. Plus I had a bonus that I was using the grill to make a rotisseries porchetta that was rotating above the legs at the same time, raining down flavor enhancing juices. Obviously that probably won't be part of the equation when you make these, but I did want to explain what you were seeing in the photo. 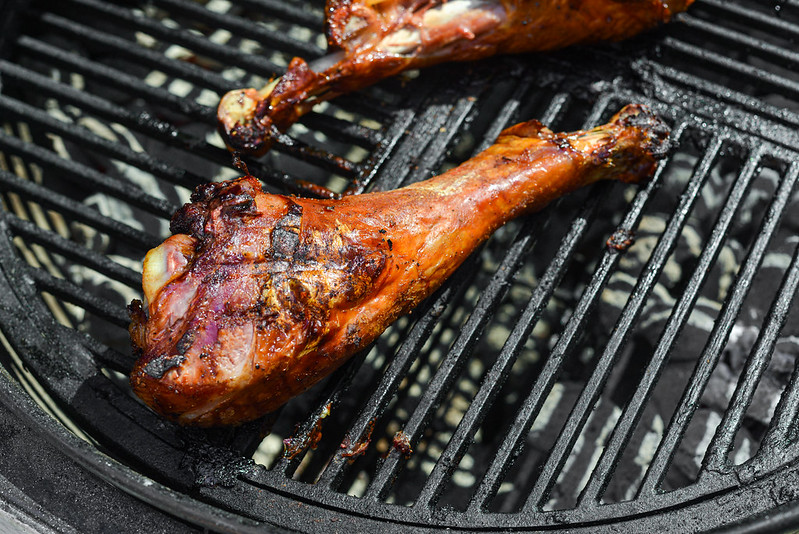 I was kind of expecting these to clock in around 45 to 60 minutes of cooking time, but I was going for an internal temperature between 170 and 175°F, and I didn't get that until about one and half hours into the cook. When the meat reached its target temp, the legs were looking great with a beautiful mahogany skin that felt like it had a decent crispness to it. 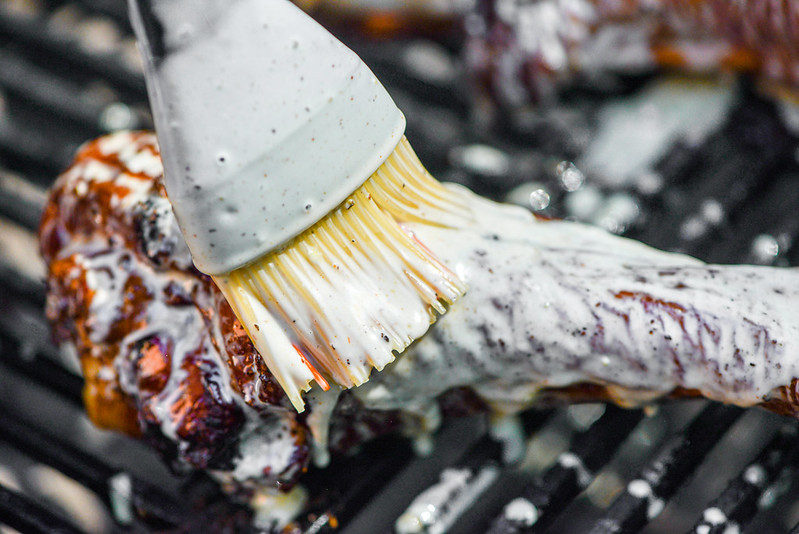 To finish these up for serving, I gave them a couple brushes of the white sauce, with some cooking time between applications. If you haven't used white sauce before, instead of sitting on top of foods like a normal sauce, it's more likely to get absorbed and whatever it's being brushed on to doesn't really stay white for all that long. 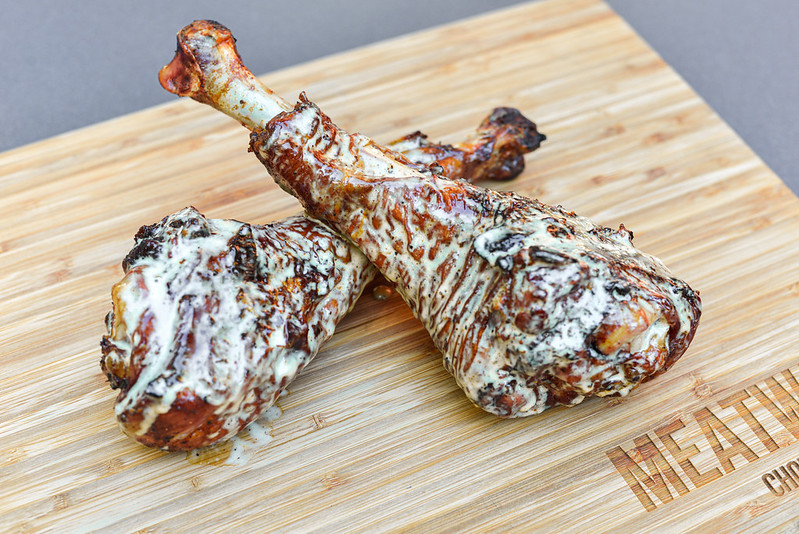 So after the second brushing, I got some pics quickly while you could still tell these had been coated with white sauce, then dug in. This was a sharing situation, so we cut off the meat into small portions rather than going caveman style and gnawing the meat off the giant bone. Like with most poultry finished with white sauce, these legs had a nice richness and mellow tang to them that paired well with the meat that was still juicy and also had a noticeable kiss of smokiness. I kind of expected all that from experience, what I was most excited about was the skin, which was tender and easy to bite through, retaining just a tad of crispness after the sauce took away some of the initial crunch I had achieved. To me, that was the perfect skin for the legs and not one I think I would have gotten if I had gone low-and-slow and/or omitted the baking powder or air drying. I was throughly content with these legs, and while I don't think they'll become a regular for me, I was happy I made them and that this site now gains a much improved turkey legs recipe.