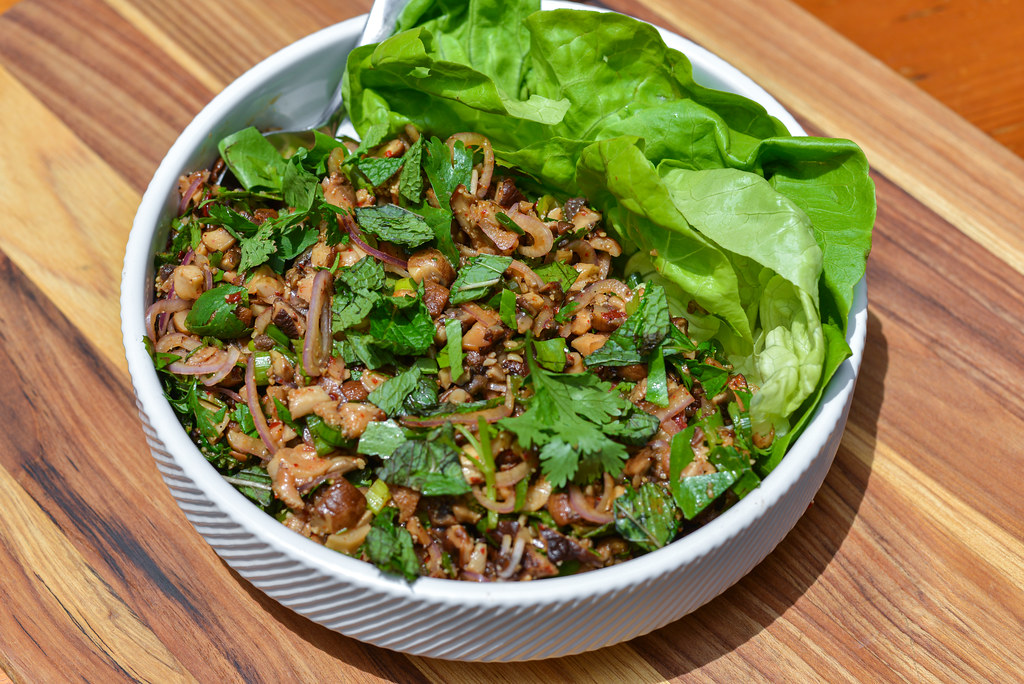 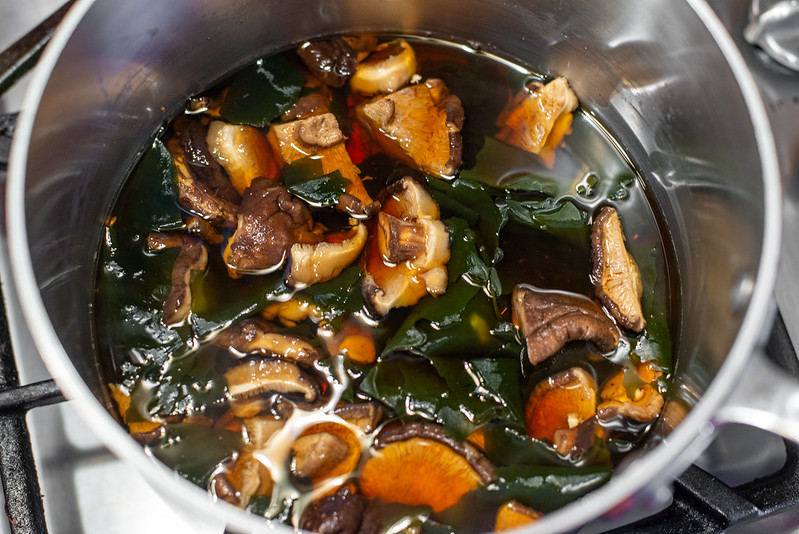 I actually started off this recipe by making a vegetarian version of fish sauce. This dish was going to be one of the main meat-free offerings at a recent Meatwave, which made the normal use of fish sauce out of the question, so I needed something that didn't use animals, but did provided the required salty and savoriness the larb needed to taste right. I didn't document the vegetarian fish sauce as part of my final recipe, but it was pretty close to this version that combines dried shiitakes, dried seaweed, soy sauce, white miso, and water to get something that, while it didn't taste like fish sauce, did provide that savory quality called for in a proper larb. 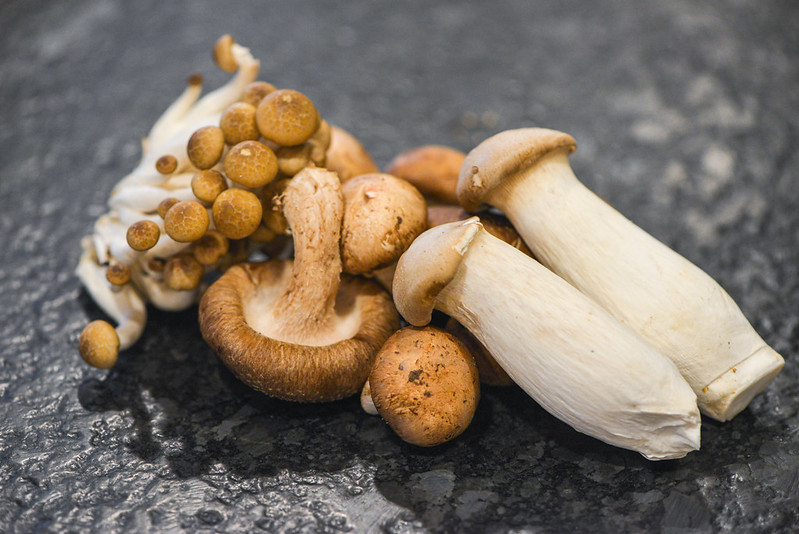 For the mushrooms, I chose to use a whole host of varieties to give the final dish even more complexity in flavor and textures. I basically just grabbed about five different types of mushrooms while at my local Asian market, and a couple of them I had never even cooked with previously at all. 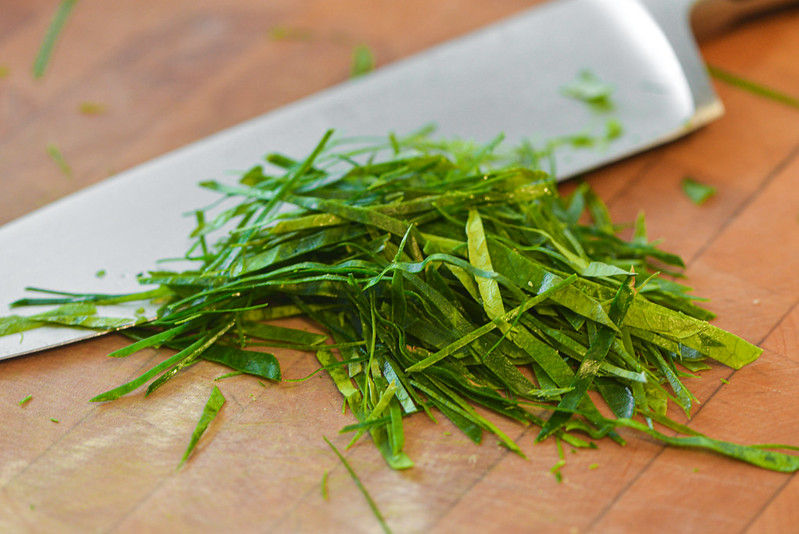 One major thing I've learned so far on my Thai cooking adventure is that most of the cooking is a pretty quick and easy proposition, but you really need to search out the right ingredients to deliver the full spectrum of Thai flavors. For larb, that means a lot of herbs, and for the best result, I don't recommend leaving any out. I used a mixture of cilantro, scallions, mint, culantro, and makrut lime leaves—all of which have their own unique flavor to make the larb as tasty as can be in the end. 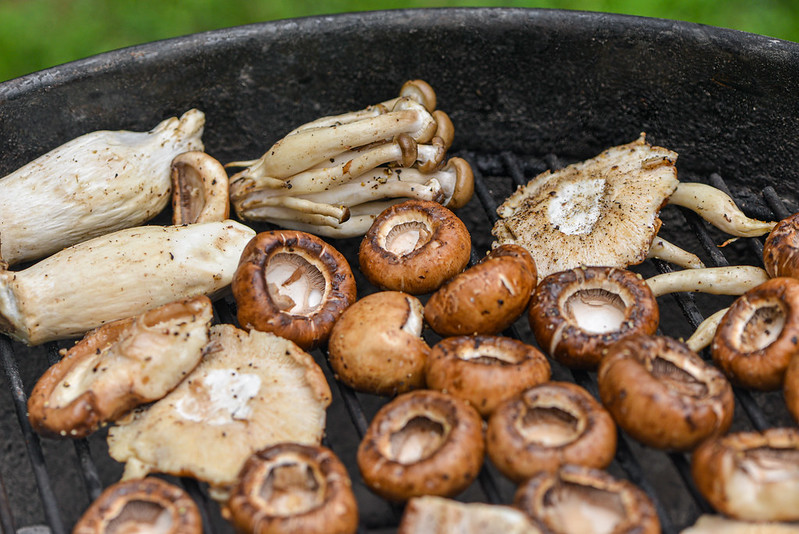 Being an avid griller, it made sense to me to use a live fire to cook the mushrooms. One distinct advantage to this was the large surface area that let me cook a lot of mushrooms at once. The high heat also meant they cooked quickly, and both of those were assets when making this recipe en masse like I was doing that day. Of course, you could also cook the mushrooms in pan on the stove too. 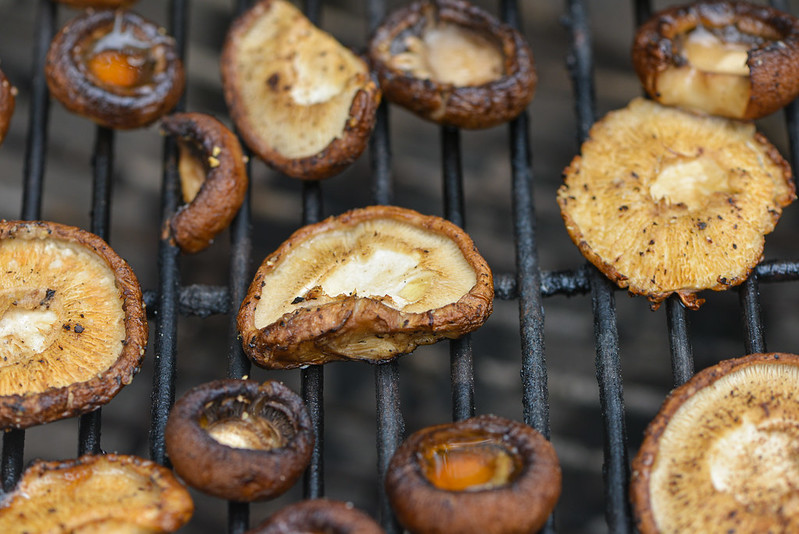 Whichever method you use, you're looking for the same thing to happen—the mushrooms need to release their moisture and then brown. It's kind of amazing how full the grill was when I put the mushrooms on, and then after about ten minutes of covered cooking, how much the mushrooms all shrunk and all the empty space there now was. 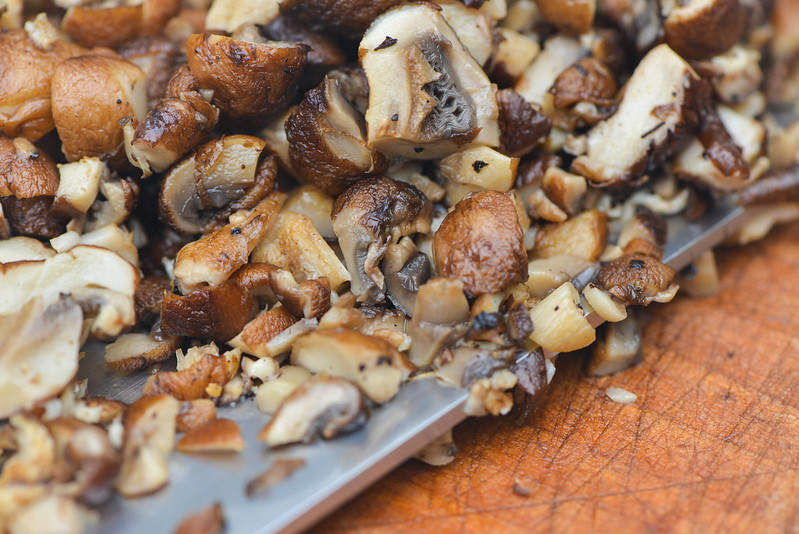 Once the mushrooms were done, I transferred them to a cutting board and roughly chopped them all. I then placed them to a large bowl and started adding all the rest of the ingredients to complete the larb. 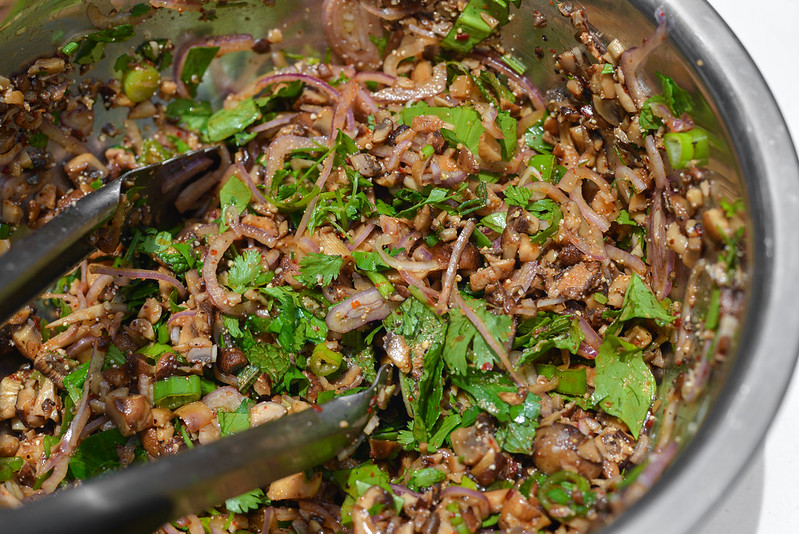 In went a hearty amount of shallots, all the herbs, toasted rice powder, and a dressing that was a simple mixture of the vegetarian fish sauce, lime juice, sugar, and toasted hot chili flakes, added to my desired heat level. I then transferred the mushroom larb to a dish and served it with bibb lettuce for making wraps. 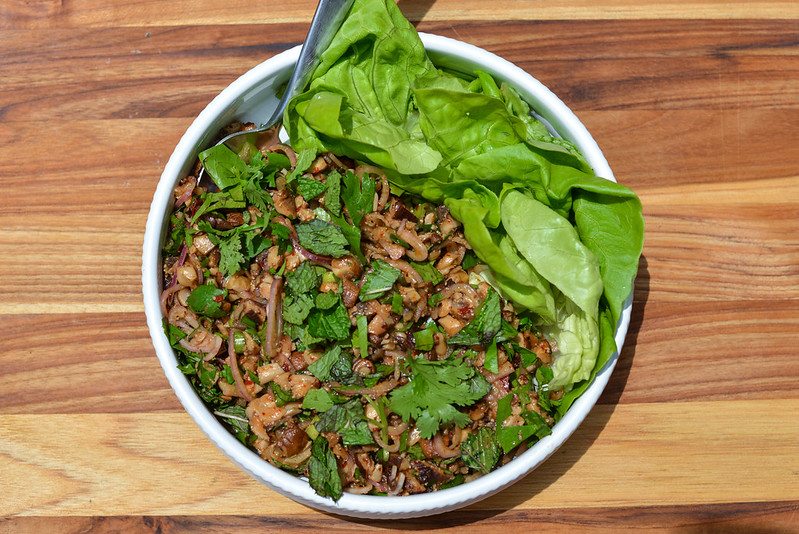 Just like most Thai dishes I've made to date, this didn't take too long or too much effort to put together, but having all the right ingredients sure made it taste incredible. I'm a larb lover, and this was actually one of my favorite ones I've ever had. It had that bright and savory flavor I'm instantly attracted to with a medley of fresh notes from the various herbs used. I think where this really rose above other larbs was the use of mushrooms though. I'm used to getting chicken or pork larbs, which are great, but I bet if you give mushrooms a try too, you'll instantly understand why they're even better. The mushrooms provided this additional earthiness that furthered the complexity in a way meat doesn't, and they also soaked up some of the dressing, which I think made the overall dish meld even better together and also be more intensely flavored. So mark this as another win for homemade Thai food, and I'm hoping to just keep the hits coming and sharing the results as they happen. 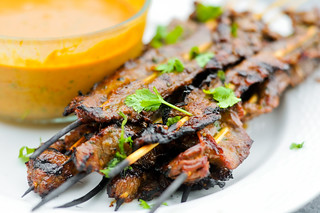