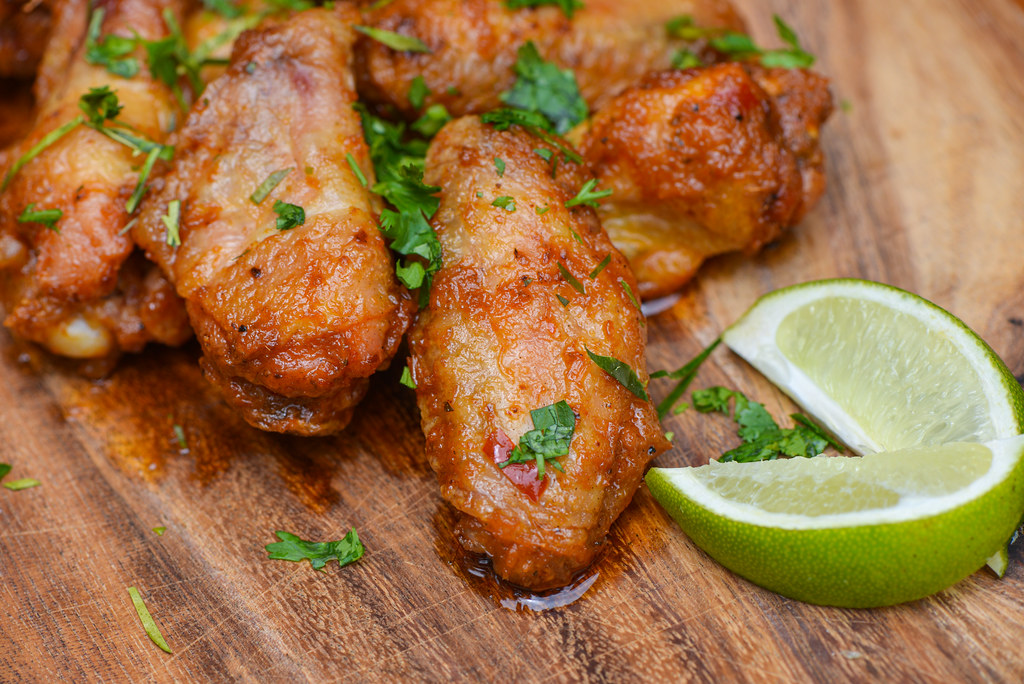 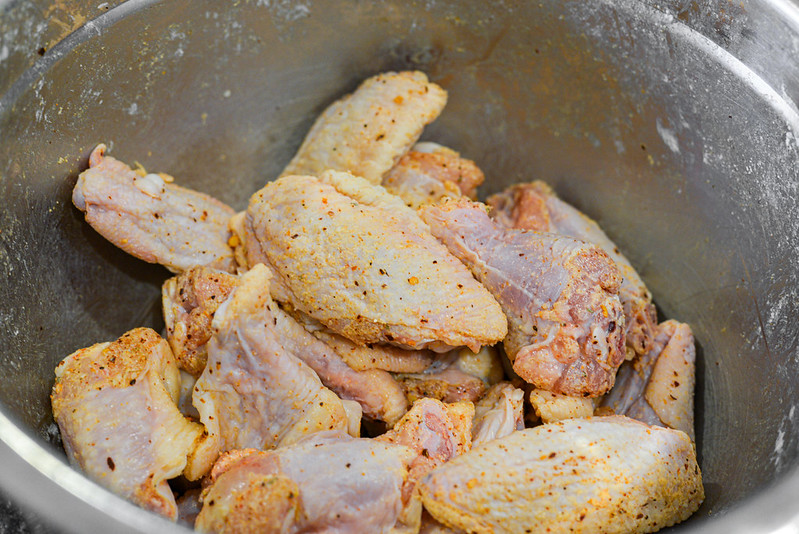 While the recipe is built off of traditional ingredients, it is not a Thai recipe. The method for preparing and cooking the wings is my standard that procedure to get the crispiest skin and juiciest meat you can get when grilling. This started with coating the chicken wings with a mixture of baking powder, salt, and some hot red chili flakes. 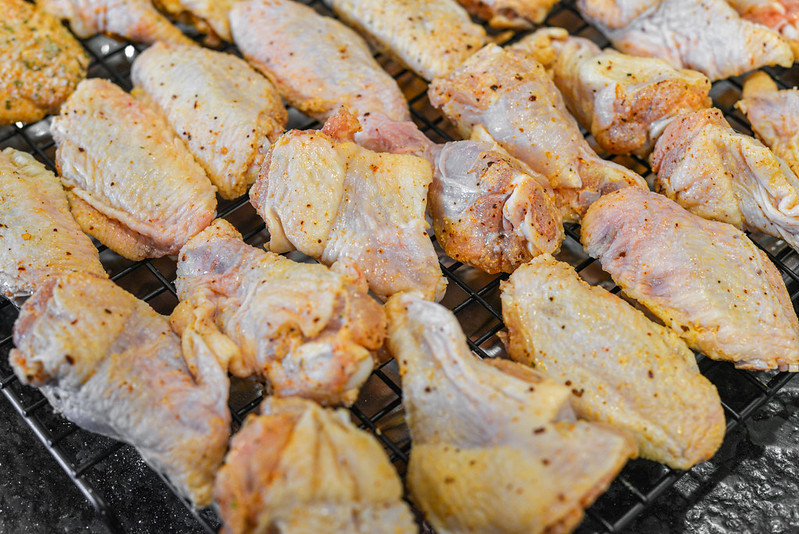 I then placed the wings on a wire rack set in a sheet pan and stuck the entire thing in the fridge to allow to air dry overnight. The combination of the dried exterior and baking soda are what produce both a crackling and textured skin that holds its own against traditional fried wings. 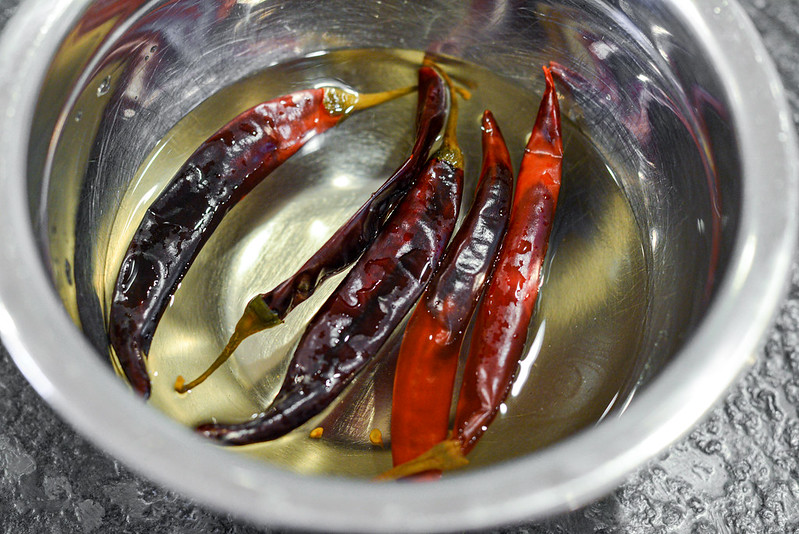 The red curry paste is really the heart of this recipe, and is where I stuck to a fairly traditional recipe. I took a cue from Andy Ricker's Pok Pok Cookbook and used dried puya chiles as the pepper of choice for both its heat and color. I soaked the chiles in hot water for ten minutes prior to using them. 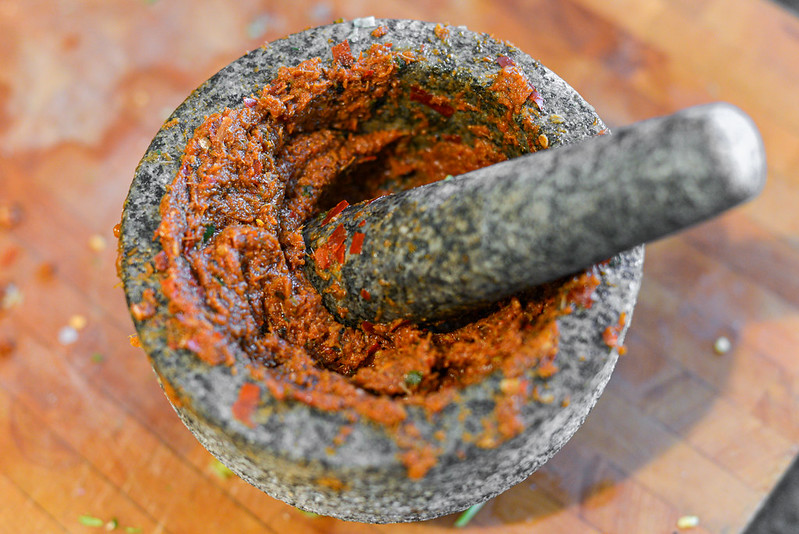 I mashed together all of the ingredients for the curry paste in my mortar and pestle. There really is no substitute for this to get the right flavor and consistancy for Thai curry pastes and I've now grown accustomed to the effort needed to break down all the ingredients into a homogenous paste, which is not inconsequential—your arm will be pretty tired after putting this together. My biggest issue previously with paste production was that my mortar and pestle was too small and I often have to work in batches, but I just got an upgrade as birthday present, so going forward I can avoid what was previously double or triple the work. 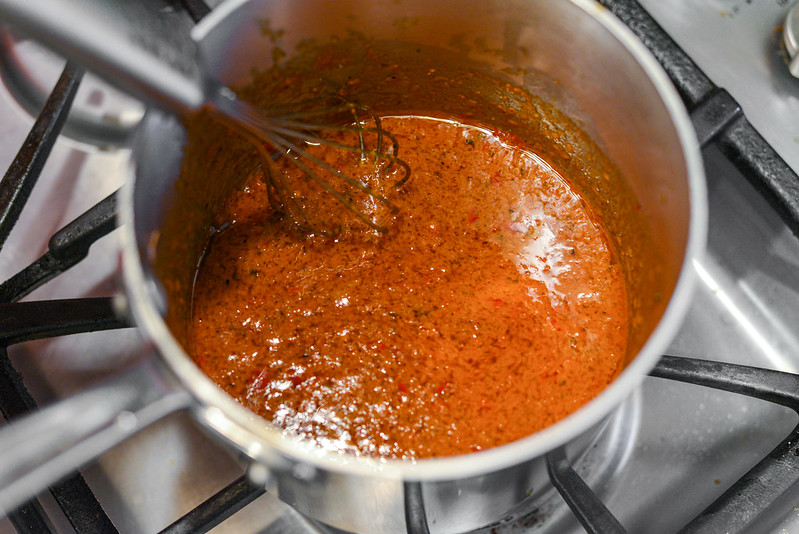 I considered just using the paste alone as a coating for the wings—I've done this with a couple Thai dishes I've made in the past—which would have delivered a very spicy and intense flavor, but then decided to go a route a bit more fitting for wings. I began by melting some butter in a saucepan, then added in the curry paste a tablespoon at a time until it tasted sufficiently seasoned. To that, I enhanced the sauce with a little coconut milk, palm sugar, lime juice, and soy sauce to end up with something very savory and balanced on the whole. 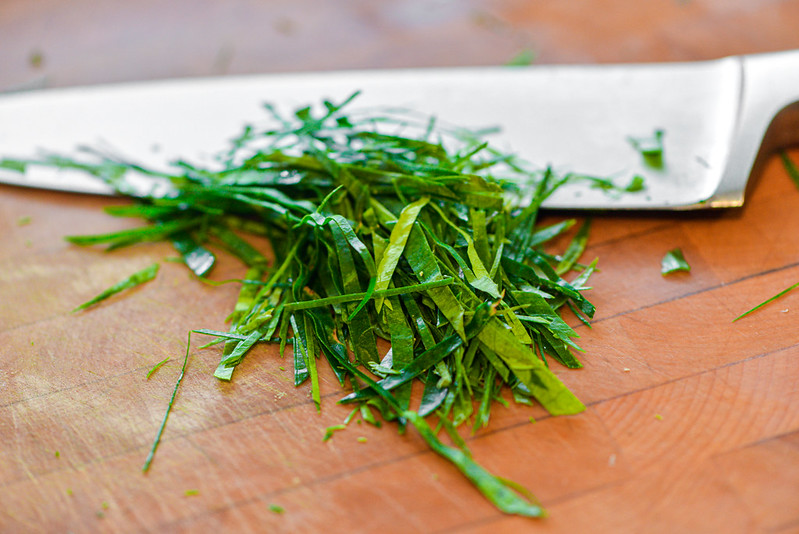 I've found an important part of Thai dishes are the herbs mixed in at the end and wanted to add a bit of that magic into this recipe. So I decided once the wings were done, I'd use both makrut lime leaves and cilantro to give the wings a touch of freshness and additional layers of Thai flavor. 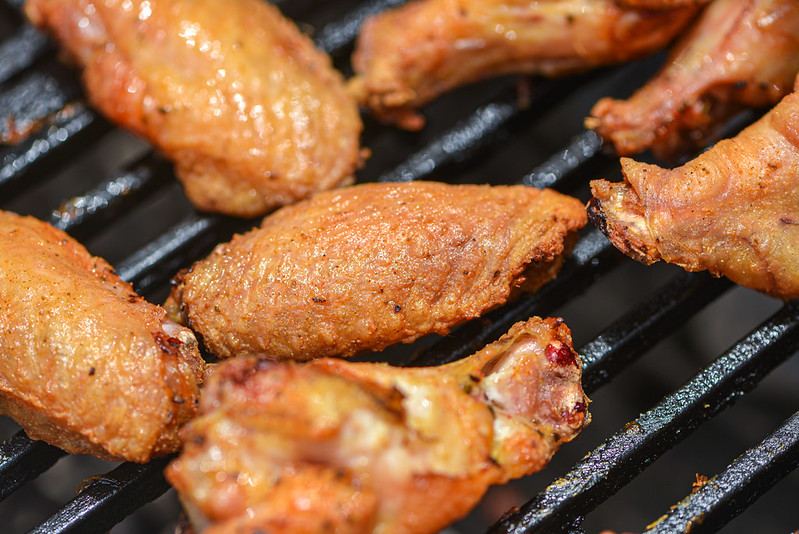 Just as I'm used to after years of wing recipe development, these little pieces of chicken cooked up to be crackling crisp and well browned after 45 minutes over indirect high heat on the grill. 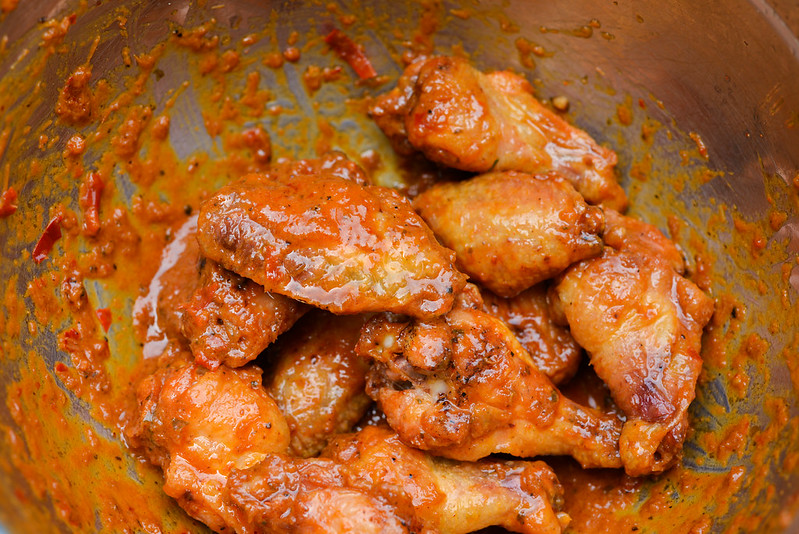 Once done, I transferred the wings to a large bowl, poured in the sauce, and tossed to coat. I then plated them up, added the garnish, and served. 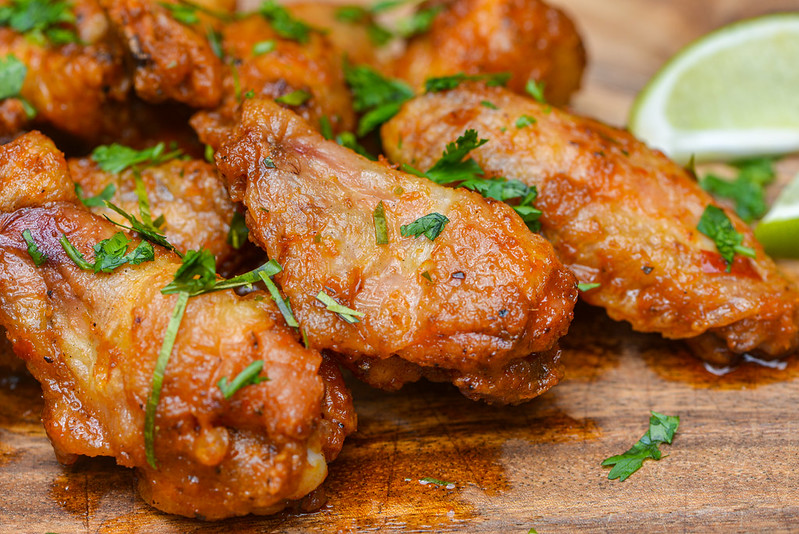 When I originally conceived making Thai red curry wings, I was envisioning something fiery hot and very intensely flavored, but what I ended up creating was a bit more subdued. That red curry paste certainly delivered the authentic and complex Thai base I was after, but the butter and coconut milk really tempered its heat and created a more balanced, and universally enjoyable, experience. If I were making these just for myself, I probably would have added a bit more chili powder to intensify the spiciness, but as they turned out here, they really did a great job with showing off how special a taste is created when starting with traditional Thai ingredients and putting in the work to make your own curry paste—the flavors overall were immense and incredibly fresh. These weren't my only idea for Thai-influenced wings, so you'll likely be seeing another recipe along these lines next year!