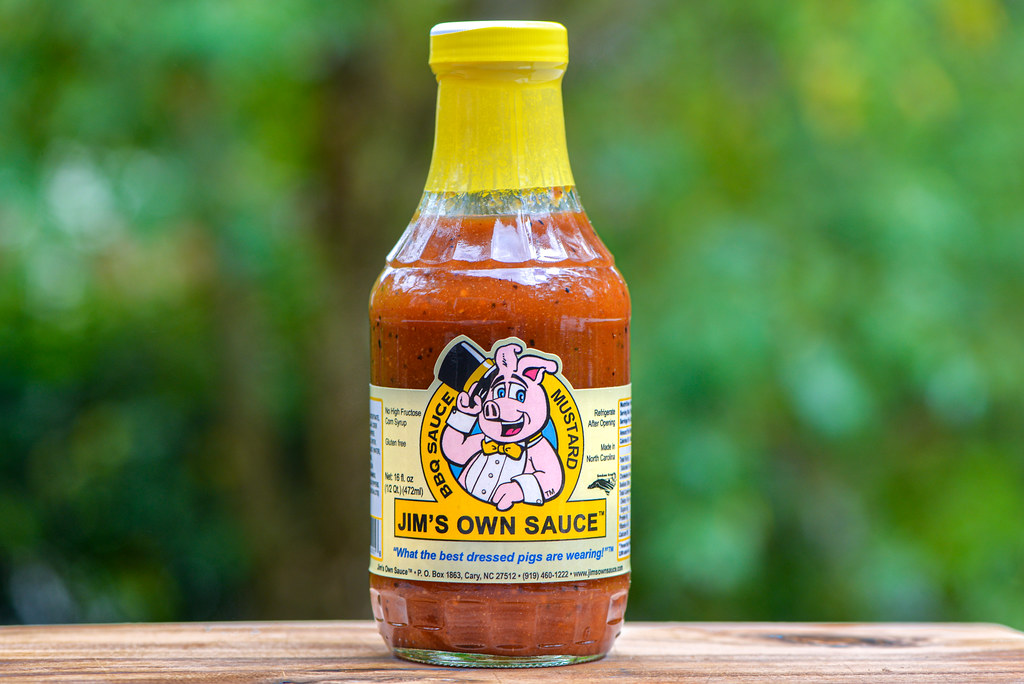 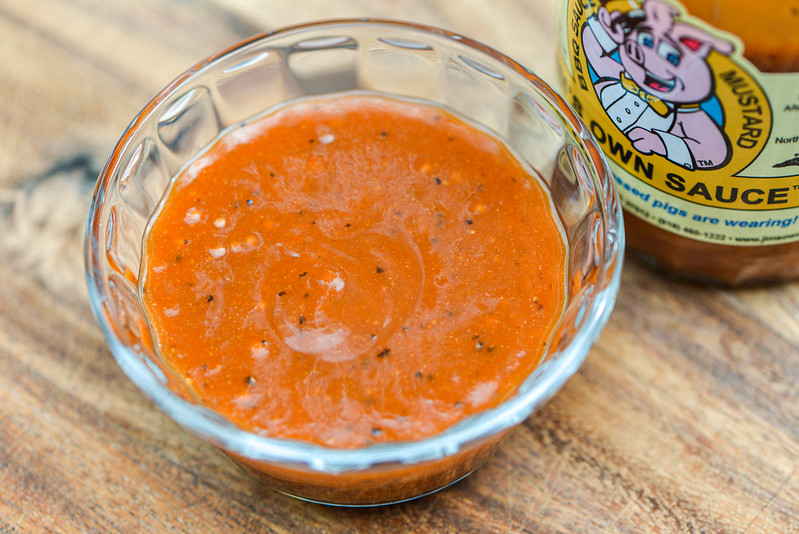 Jim Arnold, a teacher in Durham, NC, was running a small batch sauce operation out of his home until one day in 1997 when he found himself with an order for 40 gallons of his creation. This happened after his wife, Amy, brought her husband's ribs into work and one of her co-workers was so taken with the sauce that adorned them that they placed that large scale order. Jim then started to ramp up production of his sauce, which was based off of his Mother's recipe, and took on the Jim's Own brand as a full time job. Jim unfortunately lost his wife in 2010 to an illness, and soon after decided to sell his business to Willem and Marilene van Schalkwyk, owners of Gentlewoods Food, Inc. based in Cary, NC. That couple has kept the Jim's Own brand alive and continues to produce six different sauces under the name, in addition to lines of rubs and seasonings.

The distinct harshness of mustard has a prominent presence into the aroma, but there's an almost equally strong sweet tomato smell that keeps that mustard from traveling too far into pungent territory. A vinegar tang is the next most dominant trait, giving the sauce added depth that's built even deeper by a lesser layer of Worcestershire. Furthering the overall complexity is a varied mixture of spices where earthy and spicy peppers play the lead role, while both garlicky and oniony bites add to the very robust, but not over the top, aroma.

This glossy sauce has a light rusty orange hue that's semi-transparent, making it very easy to see a plethora of spices that come in all different size in white, black, and orange specs. Those spices also lend a texture to the slightly watery consistency and medium-thin thickness. From a suspended spoon, the sauce falls in a fast and uneven pour that doesn't take long to switch to a lot of fast drips followed by just one or two slower ones before ceasing and leaving a thin coating of sauce left adhered to the silverware.

Despite the harshness of the mustard and vinegar in the aroma, it's the sweet tomato that takes center stage at the outset of the flavor profile. This sweetness lingers as a boost of fruitiness gives the tomato more presence and then a mild mustard pungency enters and starts the progression of building barbecue complexity. All flavors that have come before remain intact as Worcestershire next brings the savoriness, then a mild tang and garlicky bite add their own varieties of sharpness. The sugars don't leave, but do become diminished as the tartness gets dialed up and a mild pepper layer enters and adds new fruity dimensions along with a medium heat at the end. That melds with the still present tomato and mustard combo to leave a well layered barbecue aftertaste. 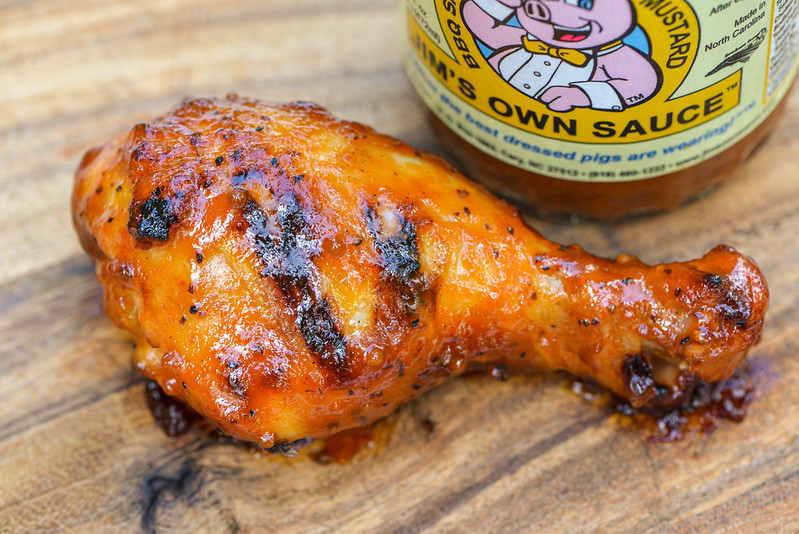 This sauce coated the chicken in a thin, even layer that was very light at first, but built up heft and color by the second brushing. The happened thanks to the sauce's ability to bake down very well over indirect heat, then over direct heat there was no sauce loss and attractive caramelization, mostly where the meat touched the grates. Both tomato and mustard entered simultaneously after being cooked, but with a little extra sweetness in play, there was no sign of mustard sharpness, even if the mustard flavor was still there. It only took a few bites for the vinegar, Worcestershire, and spices to all come into play and deliver a similar full-bodied flavor profile to what was tasted out of the jar.

It took me awhile to pick up a bottle of Jim's Own at the grocery, but once I did, I immediately regretted the lost time because I really loved the hot version. I now think I'm going to need to include a bottle from this brand each time I do a sauce review session after the mustard recipe has left me similarly impressed. If you're looking for a pure mustard-based barbecue sauce, that's not what you're getting here. Rather, it's a tomato sauce with enough mustard to give it a pungency that only adds to the ton of depth and savory elements already present. To me, it makes this recipe a bit more like a standard barbecue sauce that will really draw your crowd's attention, and based on how great is tasted both out the jar and after being grilling, I think this sauce is going to do good in any scenario you toss it into. I can imagine particularly liking my ribs slathered in it or using it to dress a pile of pulled pork, both which are medium flavored meats where you could still taste all the nuances in the sauce, but also get the great flavor benefits that would pair exceptional well with swine.