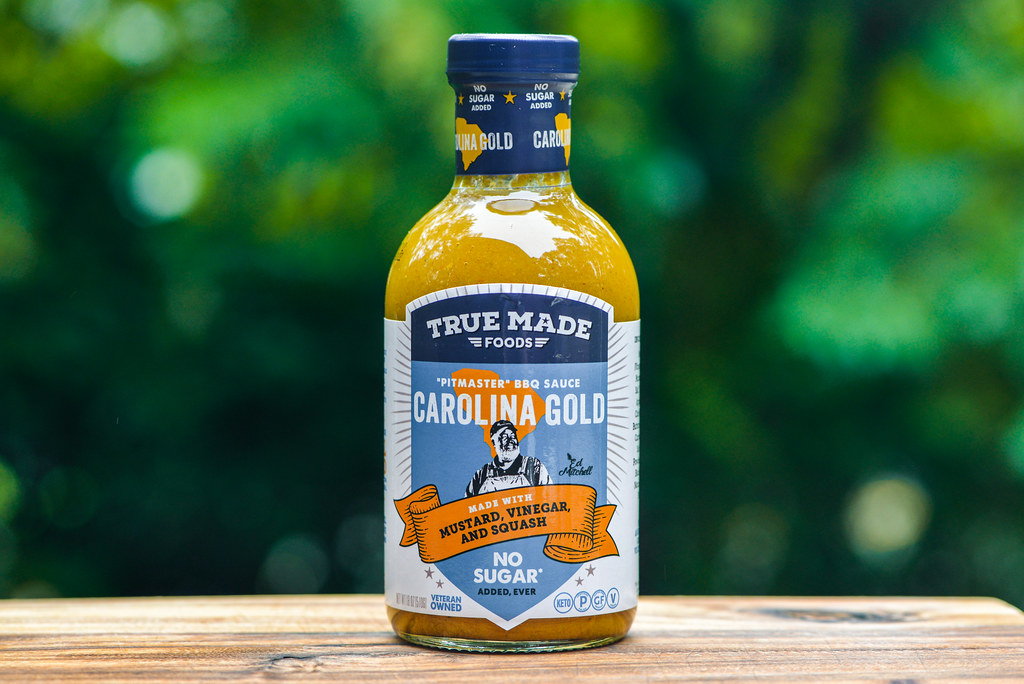 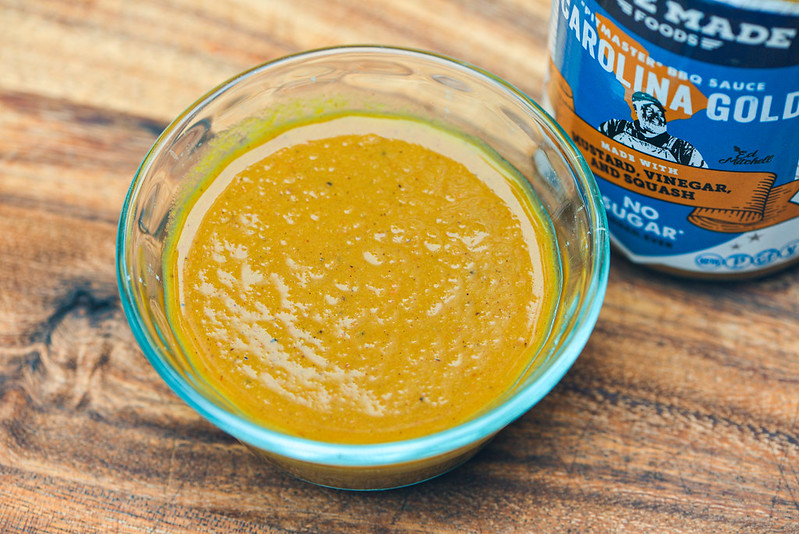 It's Pitmaster Ed Mitchell's portrait that adorns this bottle of barbecue sauce, and that mug is one I'd recognize anywhere because he was the first person to give me a true taste of North Carolina whole hog barbecue. Ed used to cook every June at the Big Apple Barbecue Block Party in NYC, where I looked forward to partaking in his incredible vinegar dressed whole hog each summer. The True Made Foods brand isn't Ed's alone though, it was actually started by Abe Kamarck, a veteran who grew up learning how to naturally sweeten foods from his Sicilian mother and wanted to bring that healthier eating to his family, leading him to create a brand that focused on common condiments made with no, or low, sugar. Abe formed a partnership with Ed Mitchell and Ed's son Ryan when he decided to venture into barbecue sauce, tapping the seasoned pitmasters to expand True Made Food's offerings, which now includes four distinct barbecue sauces along with the three other condiments in their line-up.

A tangy, pungent mustard aroma fills the nose on the first whiff of this sauce. There's a light sweetness keeping the vinegar and mustard from becoming overly dominant, while a peppery kick lets you know there's going to be at least a little heat in the taste. There is a fruitiness to the sweet layer and although it's very mild, it's enough to make the sauce venture into tomato-based sauce aroma territory.

This glossy sauce has a mustard yellow hue and is opaque, but the light color makes it easy to see lots of spices in mostly small red and black specs, but also a few larger black pepper bits too. The sauce has a thin and watery consistency with a texture to it probably from the veggies that make up part of its base. From a suspended spoon, the sauce falls in fast drips, then after one or two slower drips, the pour ceases and only a thin coating is left clinging to the silverware.

For its strong smell, the initial taste of this sauce is unexpectedly neutral. There's not much happening in the first few seconds, but once the sauce begins to settle in on the tongue, a mellow mustardy flavor comes in with a contrasting sweetness that keeps the taste from turning too sharp. It's only when the vinegar comes in does the sauce start to have a bite to it, and that makes the mustard taste more pungent. Right before the sauce exits the mouth, tastes of garlic and black pepper enter, adding more complexity which mixes with the mustard, sweetness, and vinegar to create a full bodied and well balanced aftertaste. 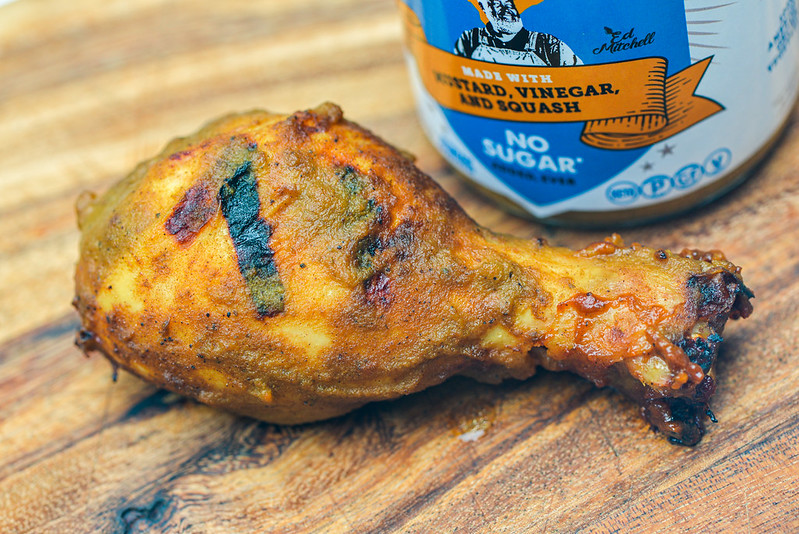 This sauce coated the chicken in a thin and even layer that baked down well over indirect heat. The sauce did have a somewhat dry appearance to it, making the leg look like it had more of a spice coating than saucy one. When moved over direct heat, there was light caramelization with no burning and no sauce loss. The sauce gained a bit of sweetness after being cooked, which gave the chicken a very pleasing balanced delivery of mustard, tang, and sugar. It was an uncomplicated profile that let the flavor of the meat come through, forming a good partnership between the two. By the time the leg was finished, that light peppery heat kicked in to further extend the flavor profile.

I've mentioned before that I try not to look at ingredient lists when first reviewing sauces to allow me to be more objective. With "no sugar" written large on the label, I was fully expecting this mustard sauce to be very tart and pungent, so was surprised when it had a good amount of sweetness to it. I couldn't help myself from seeing what it came from because the sugars certainly didn't have a distinct flavor to them. I learned it was a combo of butternut squash, carrots, and dates at work, but you would never know that though because mainly this just tastes like a well crafted mustard sauce in the South Carolina tradition. I found the balance of flavors out of the jar really nice, but with just a tad more sweetness after grilling, the sauce really shined. The flavor also was notably not over the top, making it a great pairing with the light taste of the poultry, and it would work equally as well with other mild meats like pork and fish. I can imagine you might lose some of the more subtle spice nuances if the sauce was applied to heartier items brisket and burgers, but that mustardy tang would still be strong enough to come through. 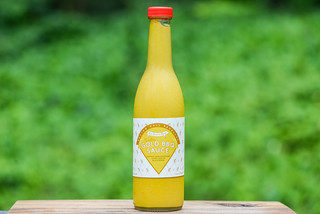