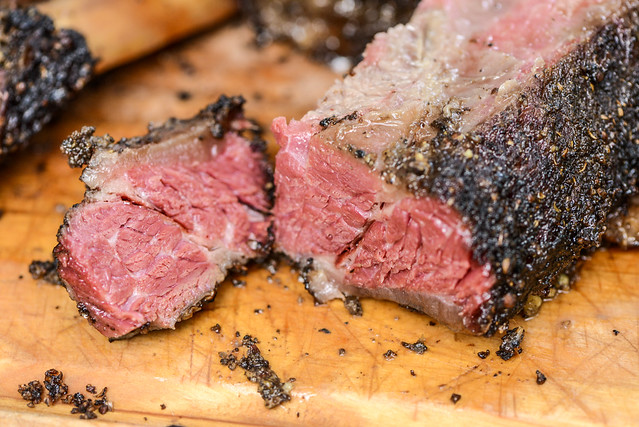 The fact that this blog is representative of an evolution in learning is both a boon and point of frustration. At the same time that it documents how my methods have changed to get better results, it also keeps alive recipes that I know need fixing. For example, someone searching for "pastrami" will come across my first attempt at it four years ago, and while I was proud of it at the time, it did not represent the juiciest, most tender product I consider ideal. I've learned much about smoking beef in the time that's passed, and there's a constant nagging desire to do a pastrami redux to get it more right. I finally did that, but changed the medium from beef brisket to short ribs, and the results were pretty stellar. 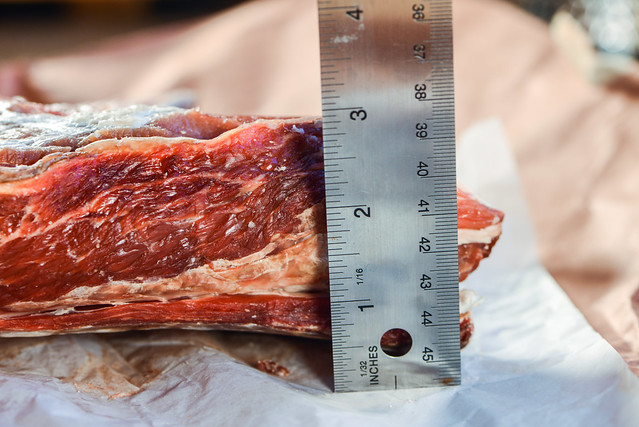 I was convinced that I was starting with a losing proposition from the get go though due to the rack of short ribs I had procured. Back in NY, big, meaty short ribs were always available at my local butcher, but a survey of a few places in Durham left me empty handed. So I headed to the higher end butcher that deals exclusively in grass-fed beef to get them. While I was happy with thickness and size of the cut, the meat was fairly devoid of intramuscular fat—something that is usually plentiful in short ribs and a reason they taste so beefy and stay so juicy during a long, slow smoke. 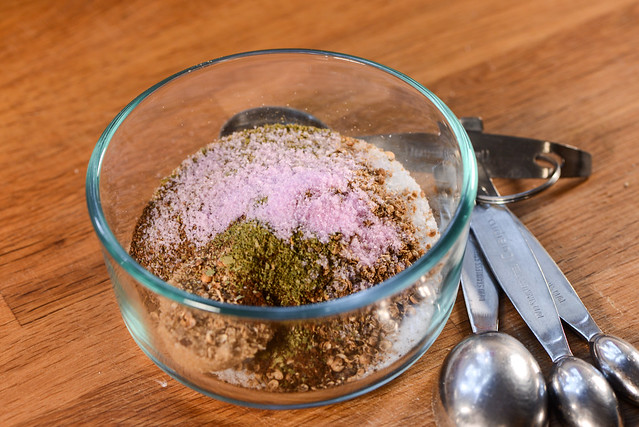 Since it was slim pickings, I had to go with what I had though and started the process with pretty much the exact cure I used in that originally pastrami recipe—while the meat's texture in that attempt wasn't perfect, the flavor was pretty dead on. 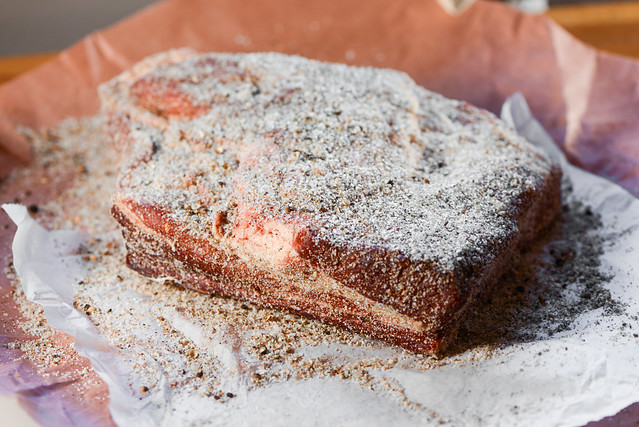 I coated the ribs liberally in the salt-heavy spice mixture, utilizing the dry cure method that has worked flawlessly for me in beef pastrami, duck pastrami, and Montreal smoked meat in the past. 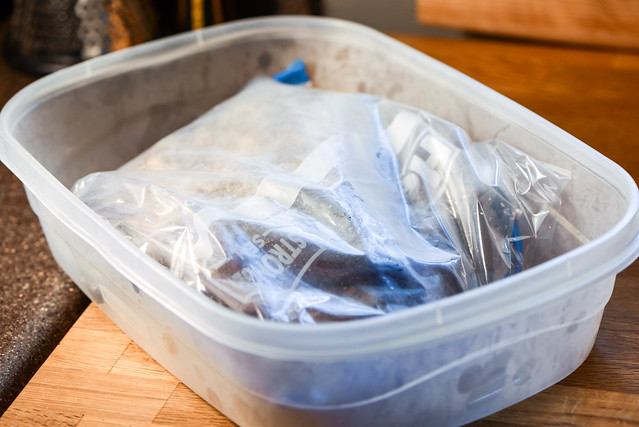 After the rack was covered in the cure, I moved it to a large Ziploc bag, sealed, and rested it inside a container (to avoid any leaking juices and potential cross contamination). I then placed it in the fridge and let the meat cure for four days, flipping the bag twice a day to promote even curing. 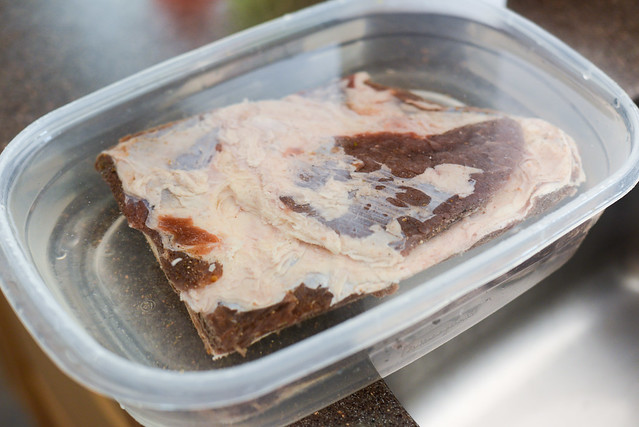 On that fourth day, I removed the ribs and ran them under water to remove all the spices that were still clinging to the meat. Then I soaked the rack in water for two hours to remove excess salt, changing the water every 30 minutes. 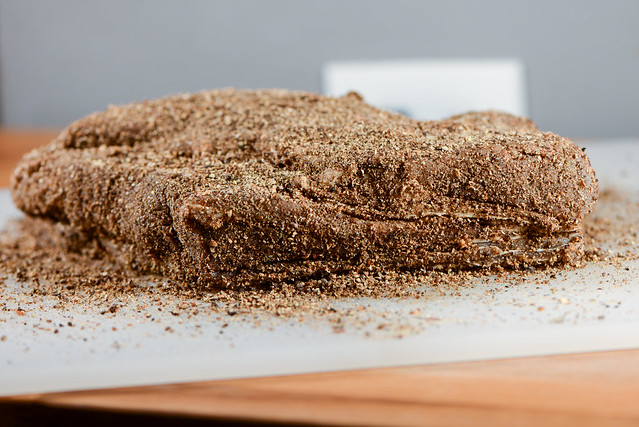 Then the ribs got recoated, this time with the ubiquitous pastrami rub that's made up of coarsely ground black pepper, coriander, and granulated garlic. 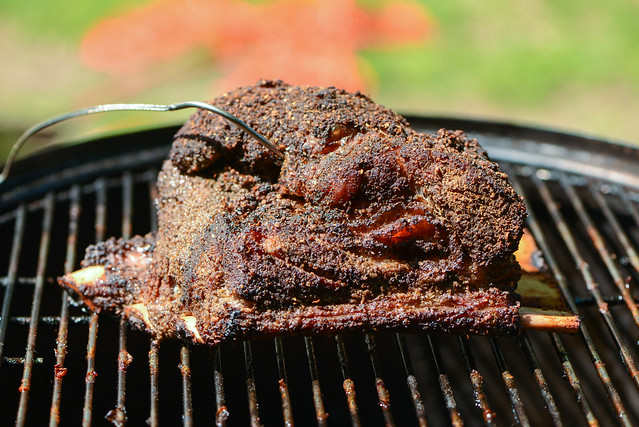 So far, this recipe is pretty identical my past pastrami one, but from here on lay the rooms for improvement. My original folly was not smoking the beef long enough—you need an internally temperature of around 200-205°F to sufficiently render the fat and leave a tender piece of meat that has a little jiggle to it when it's first removed from the heat. So I let these ribs first smoke until they hit 185°F in the thickest part of meat. 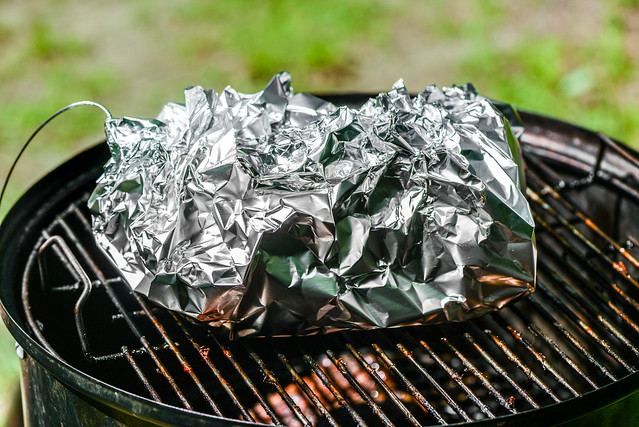 The second big mistake was not steaming the ribs, which goes a long way to making them juicy along with tender. A reader pointed out how easy it would be to steam them in the smoker by wrapping them in foil and adding a little liquid to the packet, and so that's exactly what I did this time around. While getting the ribs to the point where they were ready to be wrapped—smoked long enough to develop a thick, blackened bark—took a little over 5 hours, after being wrapped, it took only about 1 1/2 hours more until they reached the temperature I wanted to pull them at, 203°F. 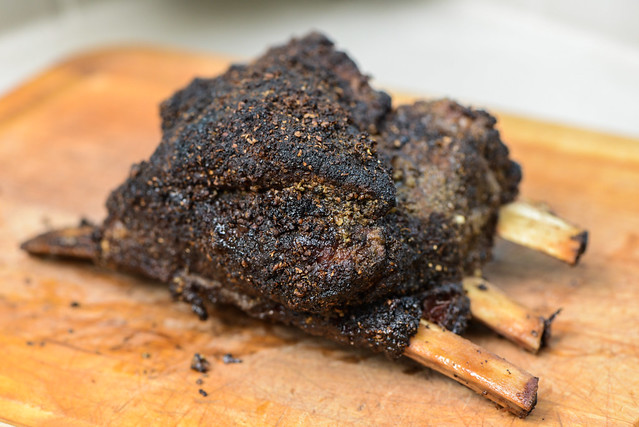 Once done, I drained out the liquid, resealed the foil tightly, and tossed the ribs in the oven to keep them warm while resting. After an hour, I unwrapped a glorious looking piece of pastrami. The meat felt tender, yet still firm enough to be sliceable, and the exterior retained its dark, crusty character, even though it had been steamed. 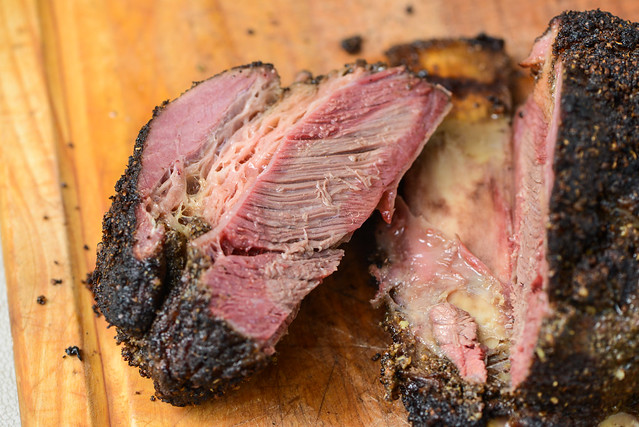 Initial excitement was put into check though when I made the first slice and saw something disheartening—the cure had not penetrated throughout all the meat. After cutting some more, I realized this was only a problem in the exact middle, possibly due to the bones and an extra large layer of fat that sat atop that area of the meat. 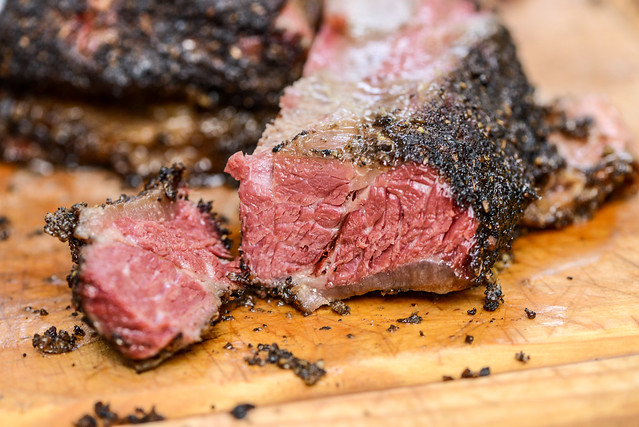 The rest of the meat was perfectly earthy red from edge to edge, but even better, the beef had a great juiciness and tenderness that my original stab at pastrami lacked, which also set my fears of using leaner grass fed beef to rest. It retained all the salty, peppery flavor that makes pastrami awesome, making this meat a treat on its own, or piled into a sandwich. Still, since there was that one mishap, I feel like I have work to do in making this recipe even more flawless. That means there may be another pastrami recipe in store that corrects that problem, rendering this one obsolete while it still lives on. I guess that's all part of the adventure though, and I feel grateful to be able to share it all with you along the way!