A Meats to an End 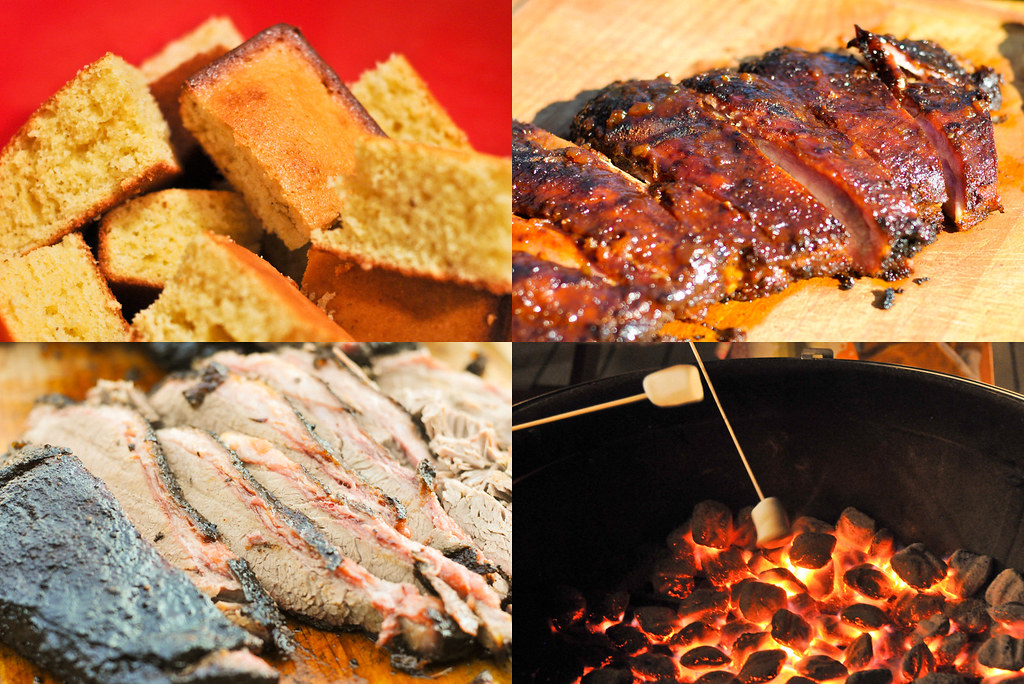 The end of the Meatwave season was come and just because it happens every year, doesn't make it any easier. A summer full of excellent grilling and barbecue finally succumbs to cold, darker days where sitting outside around the grill becomes an effort of endurance rather than pleasure. Throughout the season, I subject my loyal followers to a smorgasbord of meats, always curiously trying new recipes for better or worse, but when it comes to the last hurray, I like to give Meatwavers exactly what they want, lots of good old fashioned barbecue! 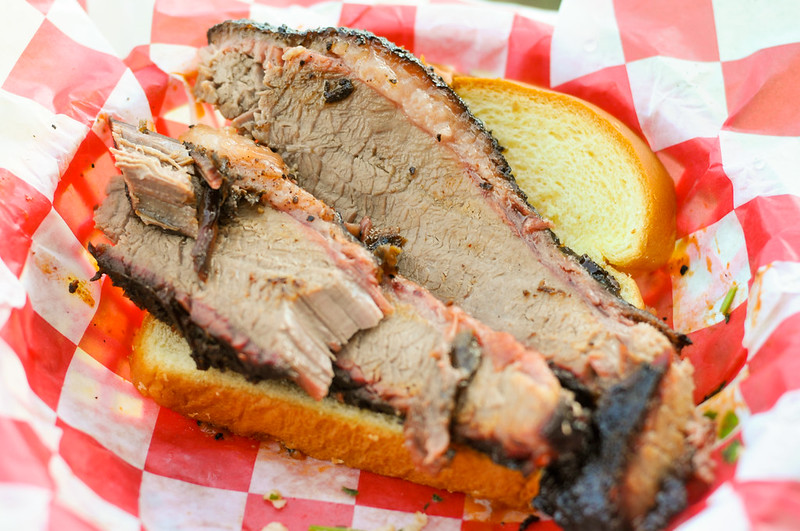 The centerpiece of this effort was brisket. Shamefully, this is only my second brisket I've ever made, and like the first one, this also became somewhat of a learning experience for me. My first brisket took a solid 16 hours to cook, so I put this chunk of beef on the smoker at 8pm the night before, ensuring it would have the proper time to finish before guests arrived. I woke up at 6:30am to check on how the brisket was going, and while the smoker was holding steady at 225 degrees, the brisket was already at 195—bordering on overdone. I quickly wrapped it in foil and kept it warm for 8 hours until a critical mass of Meatwavers had arrived, at which point we sliced into a tender and juicy piece of meat that put my first brisket to shame. 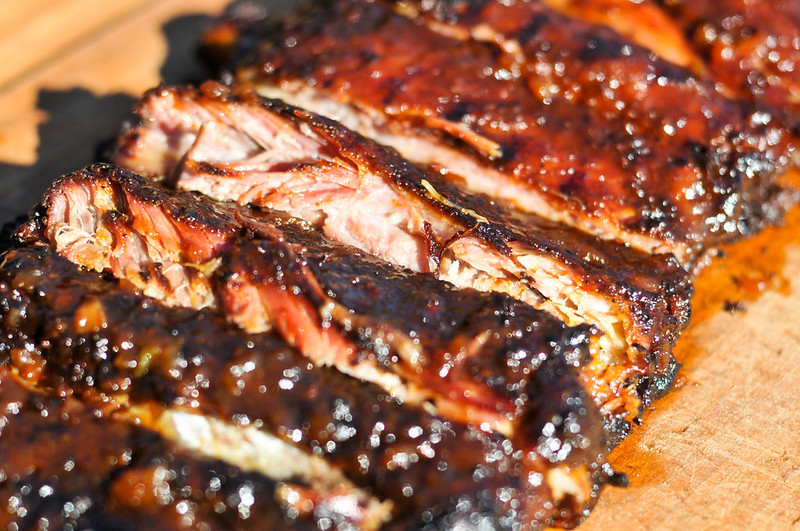 Due to my inexperience with brisket, I wanted to make something else I knew I had down, and that something was 4 racks of ribs. Having saved some dough on these by getting them at Costco over my butcher, I decided to trim them down into a St. Lious cut, which I much prefer over cooking the whole spare ribs, but usually don't do because I can only afford 2 or 3 racks instead of 4. As great as ever, we blew through all 4 racks in no time. 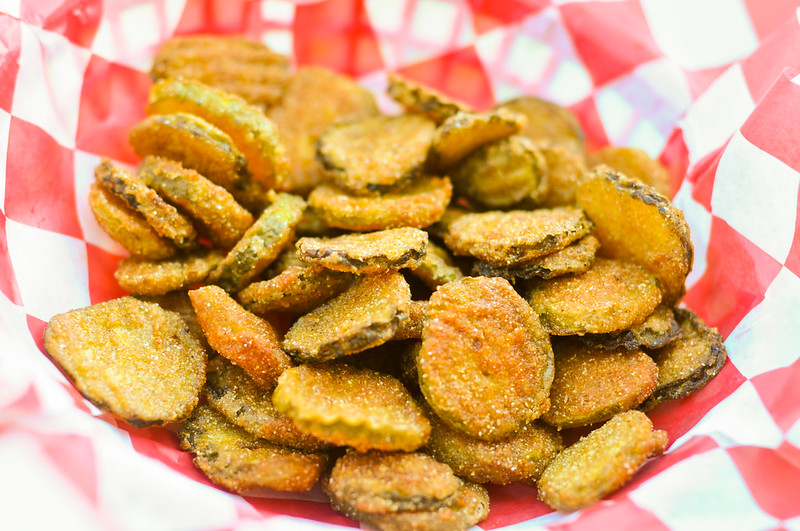 The ribs and brisket combinde accounted for 25 lbs of meat, so instead of adding more to the pot, I set my focus on sides. Fried pickles were the first idea I had, seeing as they were a favorite at the final Meatwave last season. After quickly emptying 2 whole bottles of dill chips, we were forced to go on a pickle run to reload and get us through the rest of the evening. 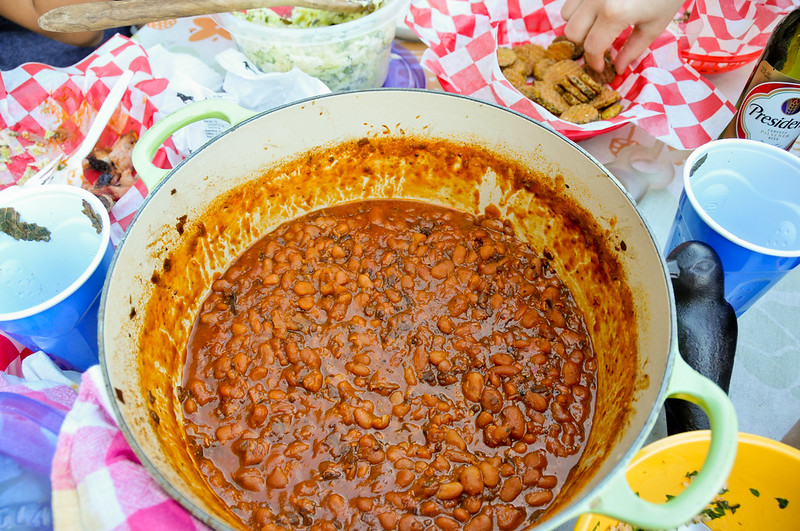 Next on the menu were my most favorite recipe for barbecue beans. These spicy beans start from pre-soaked Great Northerns, then spend about 7 hours in a low oven to become spicy, barbecue flavored beauties. Pairing great with the brisket and ribs, this was also quite the crowd pleaser, although those pickles really stole the show. 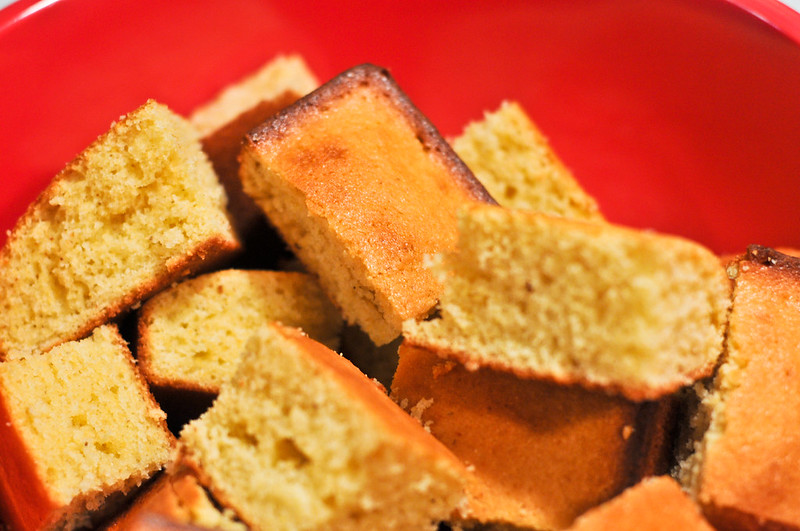 Cornbread was my choice to add something in the bread category. It's usual for cornbread to show up a few times during the season, but I realized I'd gone through the entire time without ever making it. That injustice was corrected with this moist and sweet buttermilk cornbread, which is just the way I like. 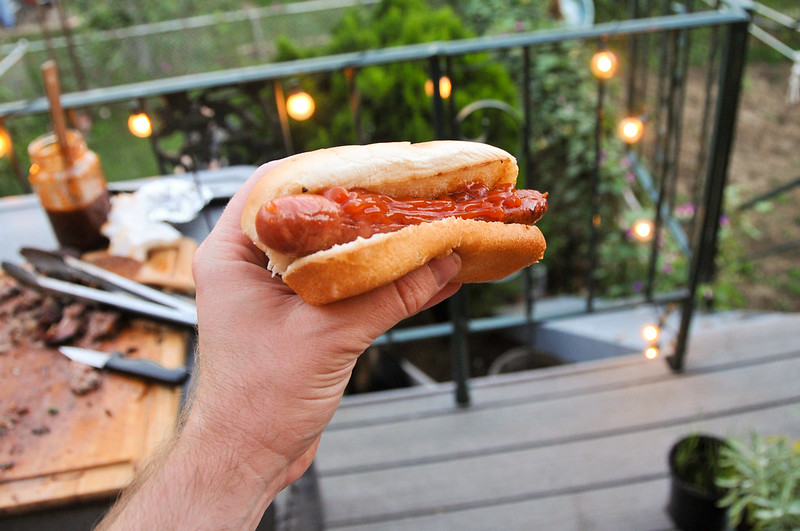 So I said that after 25 lbs of meat, we needed no more, but I just happened to have some hot dogs on hand that I felt like having as well. In the middle of the summer, I saw my local grocery had stocked natural casings Nathan's, and had bought a few packages that I've been storing in the freezer ever since. I thought this was as good a time as any to defrost a package and break into it. If you can ever get the natural casing Nathan's, I recommend you do the same thing, because these are everything a hot dog should be, and they're exactly what you get down in Coney. 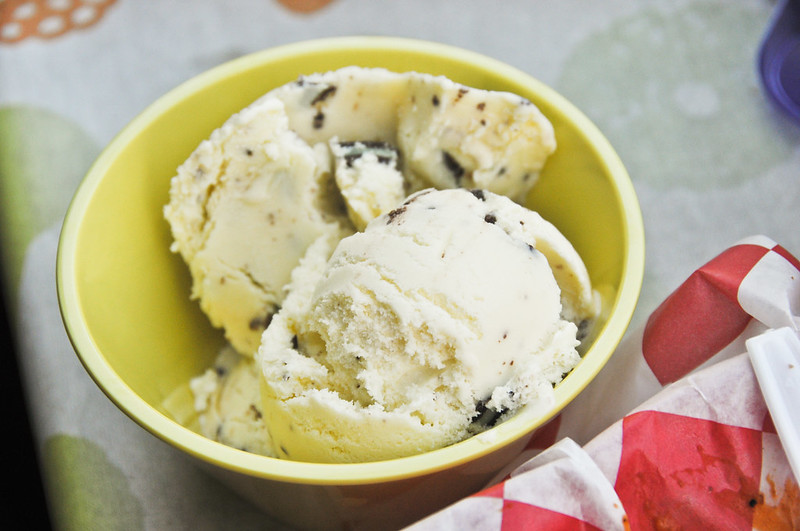 My ice cream has been really hit-or-miss this season. I've gone out on a limb and tried flavors like avocado, watermelon, and cantelope that haven't always panned out. So for the final batch, I went with one of my originals that can't be beat, mint chip! That's mint chip using Andes mints for the chips, a secret that I picked up from Mr. Alton Brown that makes all the difference. 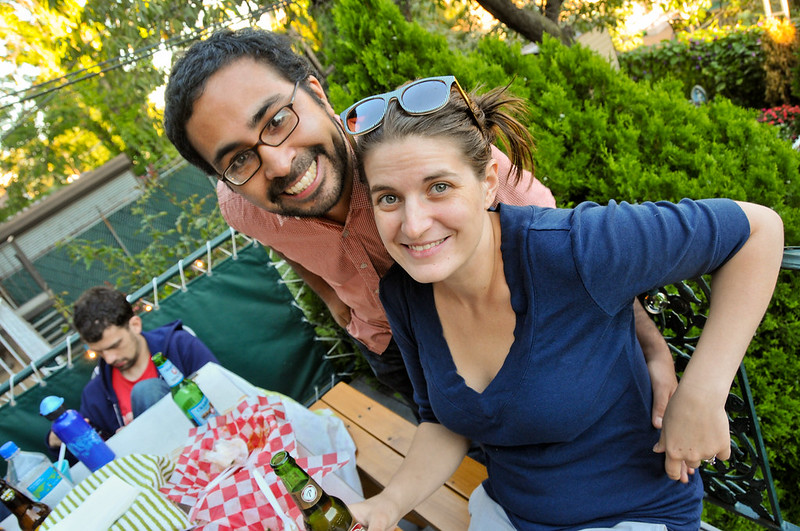 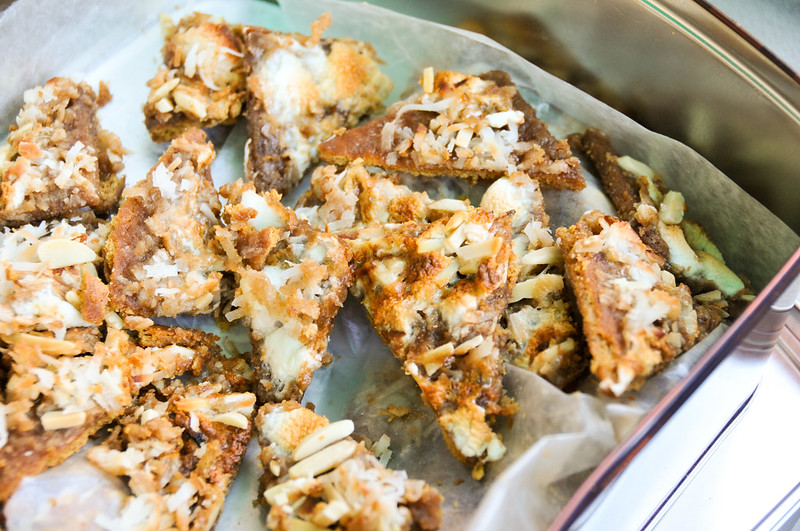 Now for the final Meatwave roll call, starting out with the two who have the record for best attendance, Brandon and Lindsay. Not only has their dedication rewarded them with the most meat of anyone, but they've also been excellent contributors. This time around they brought graham crackers topped with marshmallows, almonds, and coconut (I believe)—basically s'mores on crack. 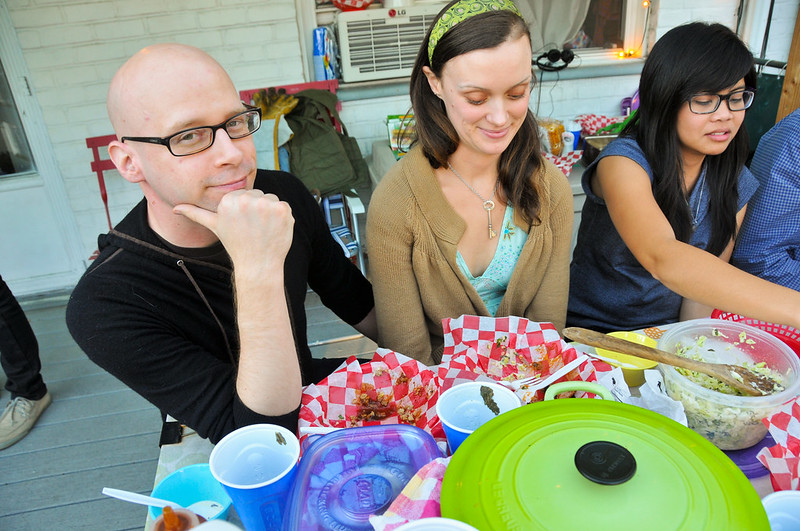 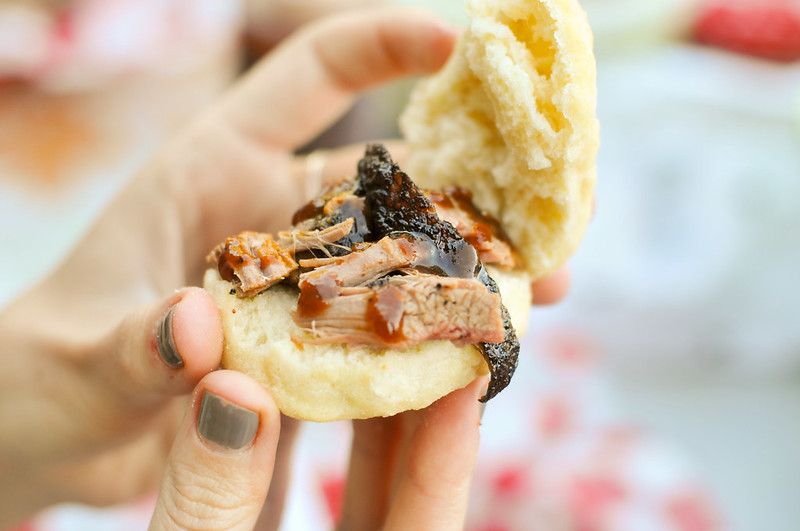 Making a comeback after years stuck in the black hole that is medical school is Suzun. Her and her man Gunny have been welcomed regulars, and although Gunny hasn't slipped from his vegetarianism quite yet, I can feel he's reaching the breaking point. This past week they provided some libation with margaritas and another side with biscuits, used here as a vehicle for brisket. 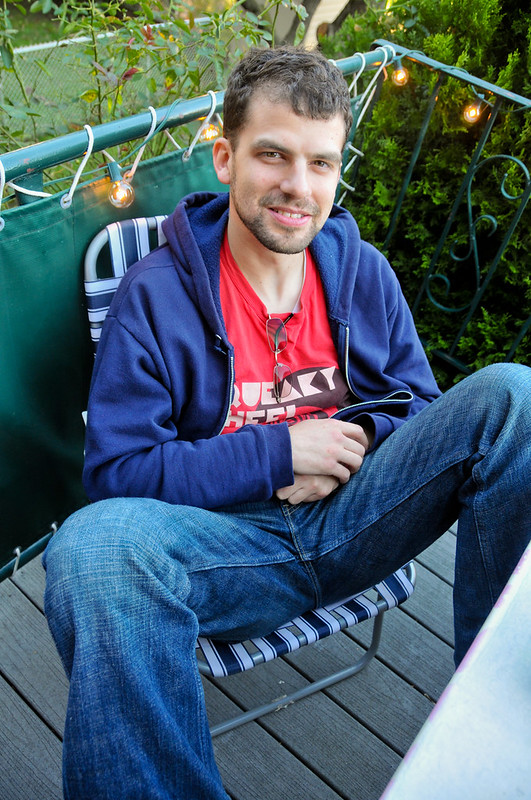 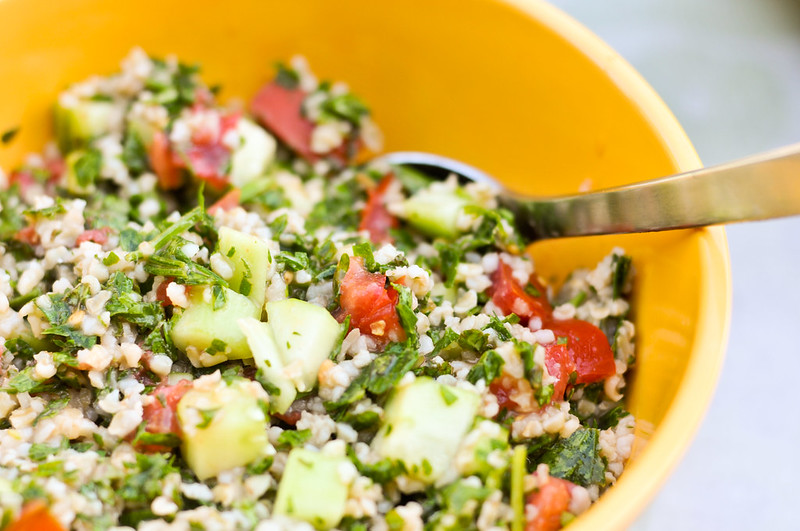 Mike also made a comeback after being on the campaign trail last year, and he graced us with some of his famous tabouleh, which added something light and fresh to an overly heavy meal. 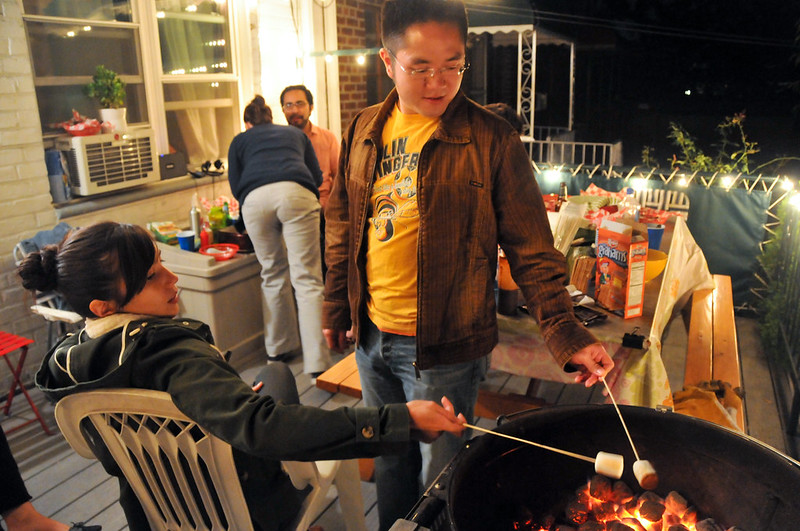 The night and season came to a close with the roasting of s'mores. The gooey treat warmed the soul as the departed sun left us in a cool darkness. Despite my love and devotion to the Meatwave, and a wish it would never ended, at moments like this it becomes clear that the time has come to put it into hibernation. It wasn't long after this photo that we were forced to move the celebration inside, where we continued the drinking and festivities, which were good times, but alas, no longer really a Meatwave. Sadness doesn't run too deep though, because I always know that we have next year to look forward to.