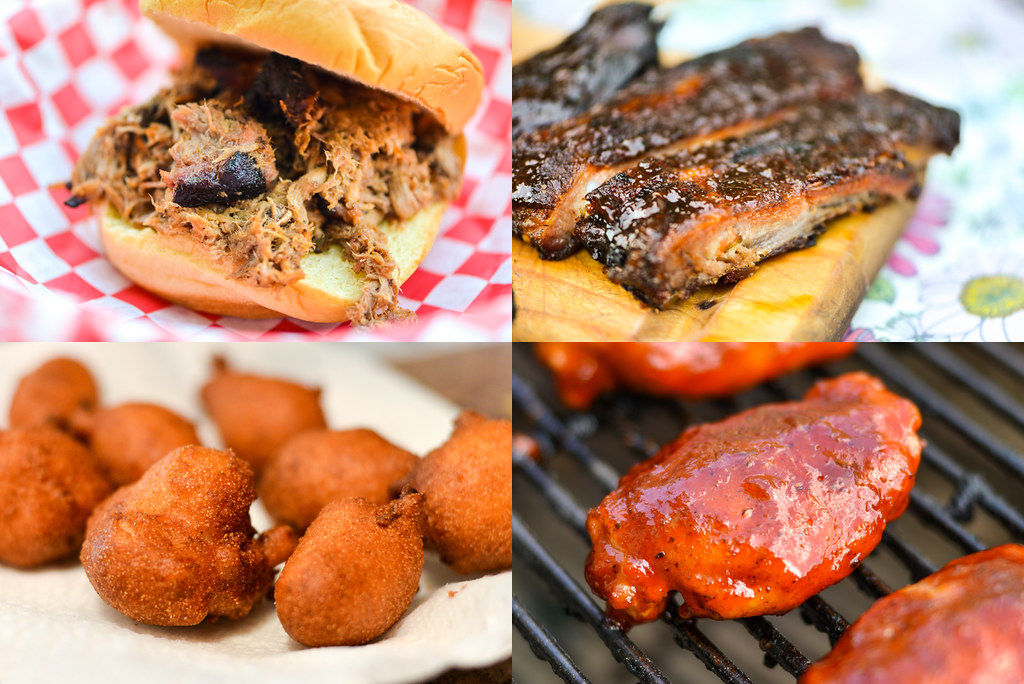 It's not a summer without the festival of all that is meat, Carne-val! I like to throw one absolute blow-out Meatwave each summer, where I spend many days preparing and smoking up a feast of everyone's favorites like pulled pork, ribs, and chicken. With a competition coming up and needing to practice all of those things, it made sense to keep with tradition and try out new barbecue recipes while continuing to deliver the irresistible feast that defines this annual event. 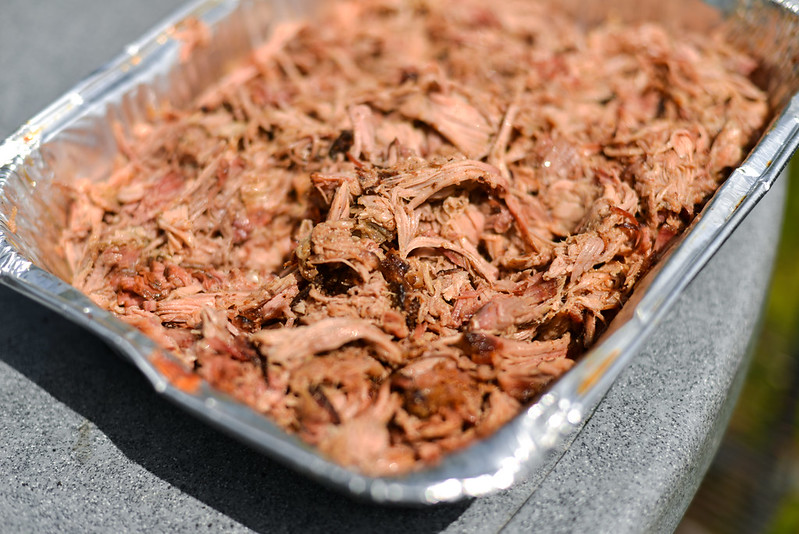 I learned from my competition experience last year that my pork shoulder was in need of some dire attention. I thought I was hot shit in pork—every one of my friends loved my pulled pork more than anything else I make—but apparently the judges of barbecue did not agree and consistently made it my lowest ranking category. I tasted some of the pork getting high scores and I know I needed to both sweeten things up and insure a juicier end product that will remain incredibly moist between the time its pulled and when it reaches the judges' mouths. I'm on the right path, but not quite there yet. I switched up my normal vinegar mop and finishing sauced with one comprised mostly of apple juice, which gave the pork a sweet flavor without tasting overly sugary. I also wrapped the butt in foil after spending six hours soaking in smoke. While this helped the juiciness and cut down on cook time significantly, it also softened the bark to point that it didn't deliver the spice and bite I need it to. This new recipe has given me a game plan for my upcoming competition, and while I hope it raises me up a few notches, I bet I still fall short from being in the top ranks. 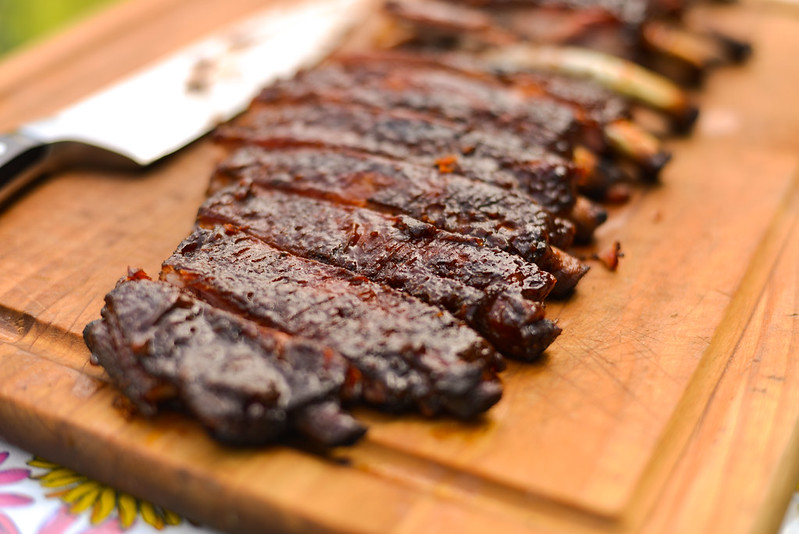 Next up in the Carne-val lineup were ribs. I faired well with ribs last year, so I only made a few minor adjustments to my rub and sauce that I think injected more spice into the final project, enough to stand out through their sweet finish—an agave and brown sugar glaze that I didn't use on the ribs I smoked here, since I personally don't think those sugary sweet type of ribs are all that great. I over cooked the ribs a bit, but the flavor was pretty spot on for what I'm looking for and I'm feeling good about these, plus the Meatwavers loved them. 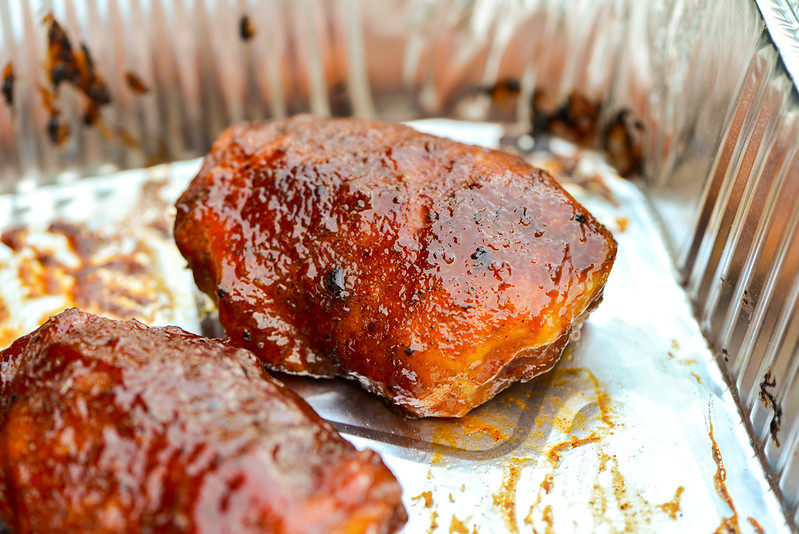 Then comes the dreaded chicken, a category where I went from top 10 ten at one competition, to near the bottom at that next. I did a full range of variables on these thighs ranging from rub, to temperature, to cooking method. I think I found a combo I'm happy with, the only thing I need to look out for is over cooking the chicken, which I did with too many of my practice thighs. 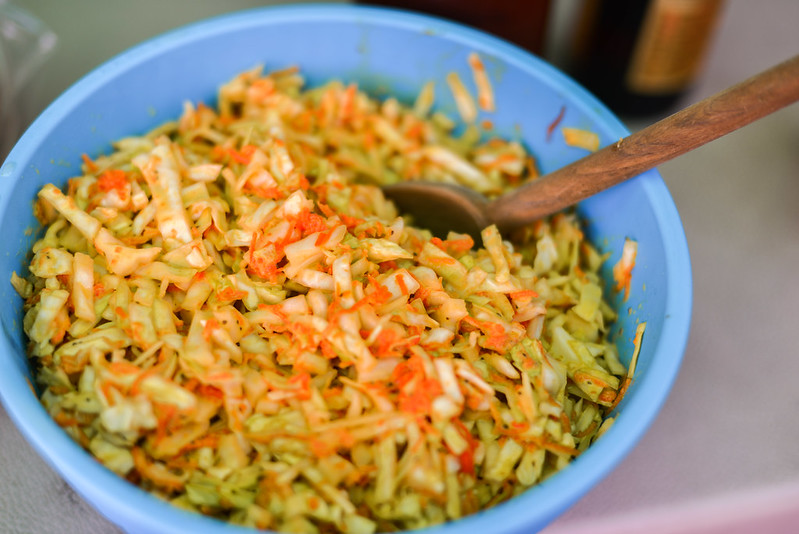 You can't have a barbecue feast without some pickings, and coleslaw seems like a side that always fits the bill. I tried out a new recipe for a mustard slaw that mixed mustard, vinegar, mayo, sugar, celery seed, and Texas Pete to make a creamy and tangy dressing with a bit of bite and slight heat. Of all my slaw recipes, I'm digging this one the most so far. 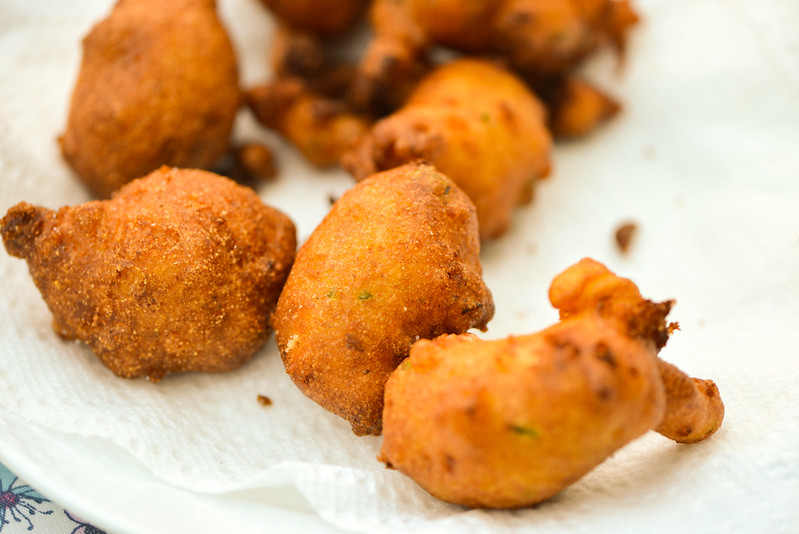 Whenever there's pulled pork, I can't stop myself from frying up a batch of hush puppies. These are like cornbread on crack— a crackling crust gives way to a pillow inside that's sweet and chewy. After the first batch was gone, I tried a second with jalapenos and cheese mixed in that were also a hit, although there was a preference to the original. 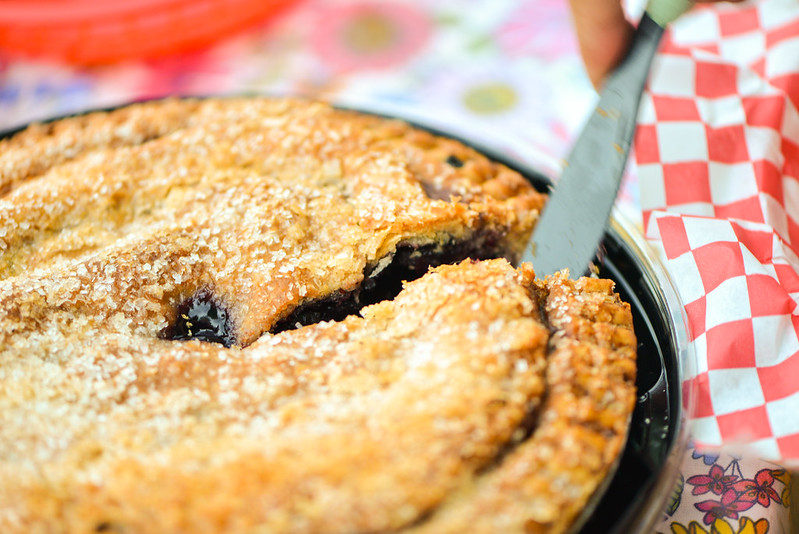 Desserts were provided by celebrating Meatwavers, and Kevin and Lauren did well with this blueberry pie that came along with a side of dulce de leche ice cream. 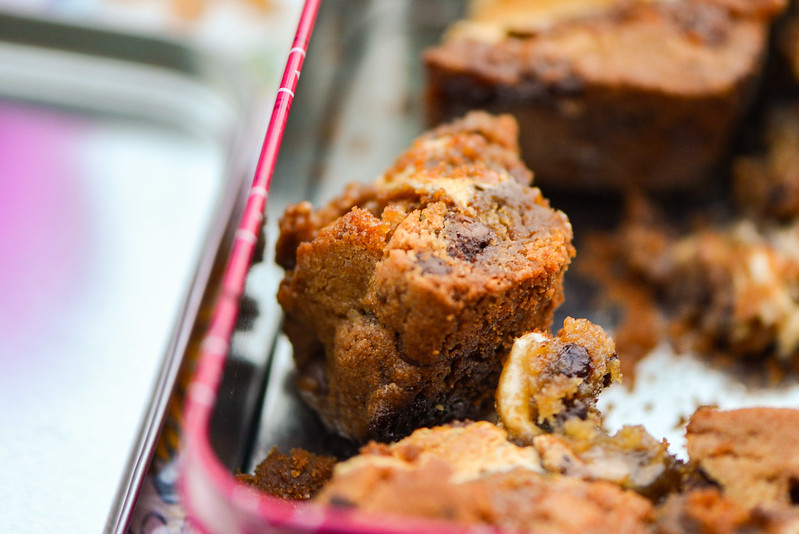 My sister and Chuck upped their game this week with these s'mores bars. Soft and chewy and loaded with sugary sweetness, they were so awesome. It was also a great way to get the addictive graham cracker, marshmallow, and chocolate combo in without having to sit over the fire on such a hot day (this Meatwave also kicked off a relentlessly hot extended heatwave in New York). 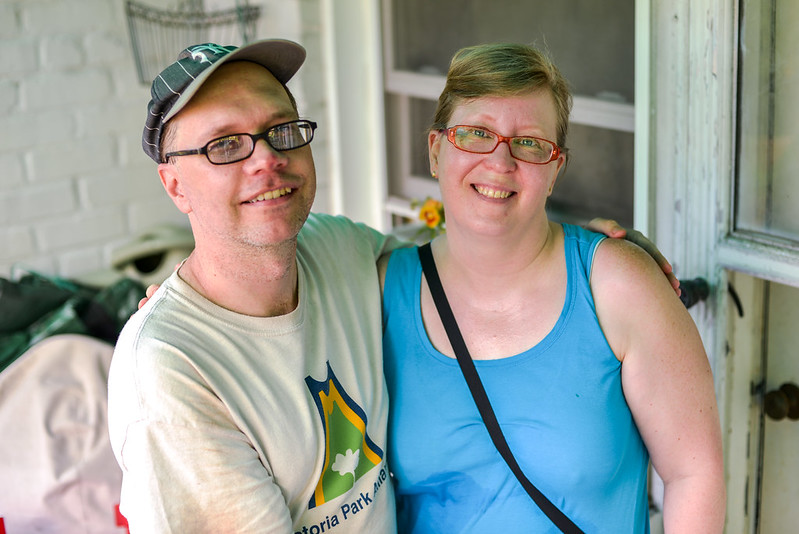 While I intended hoards to come out to dig into such a grand feast, we actually ended up with a much more intimate crowd, which I always like too since less hurried pace allows me to have more time to sit down and chat. It was a good thing Meg and Tom came by early, since I've never really had time to talk to them before in depth and they're a great source of knowledge of everything Astoria. I'm always up for talking about the latest neighborhood openings and closings and it was fun to spend the early afternoon with this type of Astoria "gossip." 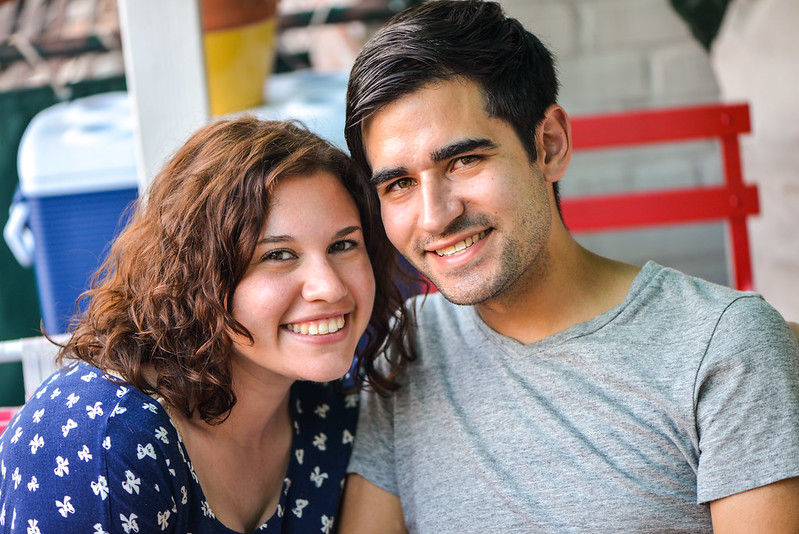 Then came my Sister and Chuck, who I believe are now the most dedicated Meatwavers of the summer. Since the wife and I aren't much for leftovers, I'm always all too happy to send these two home with anything remaining since Chuck seems to really love meals the second time around. 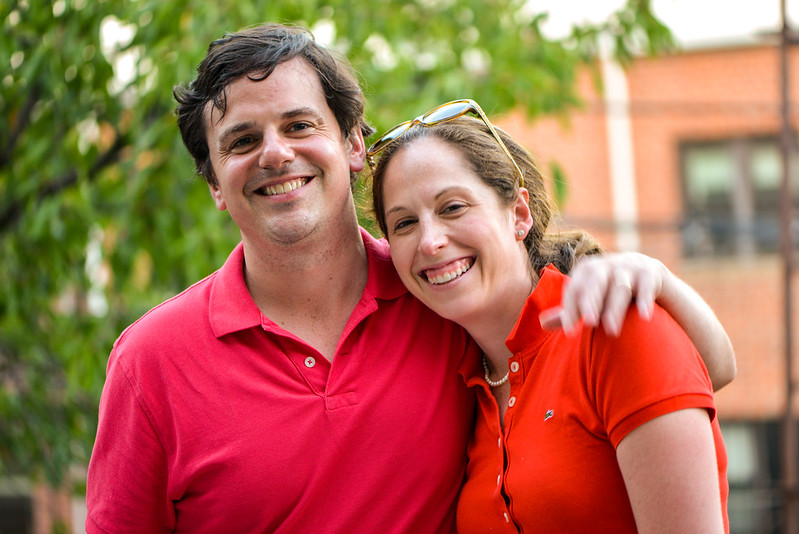 Finally we have Lauren and Kevin, who we've had the fortune of seeing more this summer than we usually get to. They stopped by after a long hot day in my buddy Pete's shop, where Kevin bribed him into creating more booze books with tons of beer.

So Carne-val has come and gone, and a grand feast it was. I came out of that hot Sunday with a little extra added to the waistline and a gain in confidence for my first competition this summer, both good things in this context.