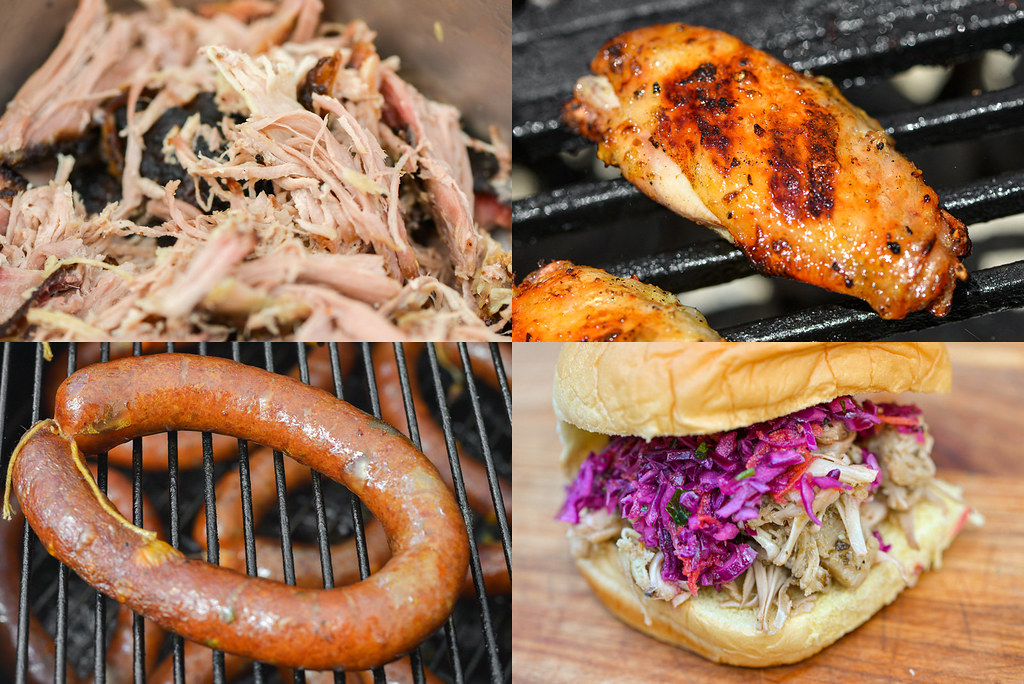 The Meatwave ceased to exist in its original form since the beginning of the pandemic. In 2020 we there was never a true Meatwave gathering, but instead, grilling and barbecue dinners with friends, usually just one family at a time. 2021 brought a slight return to form, but I kept the invitation list to a minimum so we'd max out at around ten folks in order keep things as safe as possible. We started 2022 in that way, but I was finding more friends inquiring on joining in and decided it was time to give it go at returning to the more-or-less open invitation cookouts that were the pre-pandemic norm. Now excited that this was happening, I thought it would be fitting to go all out and bring back Carne-val, our annual celebratory bash, and cook up a menu of larger format recipes I've been sitting one for a couple a years. 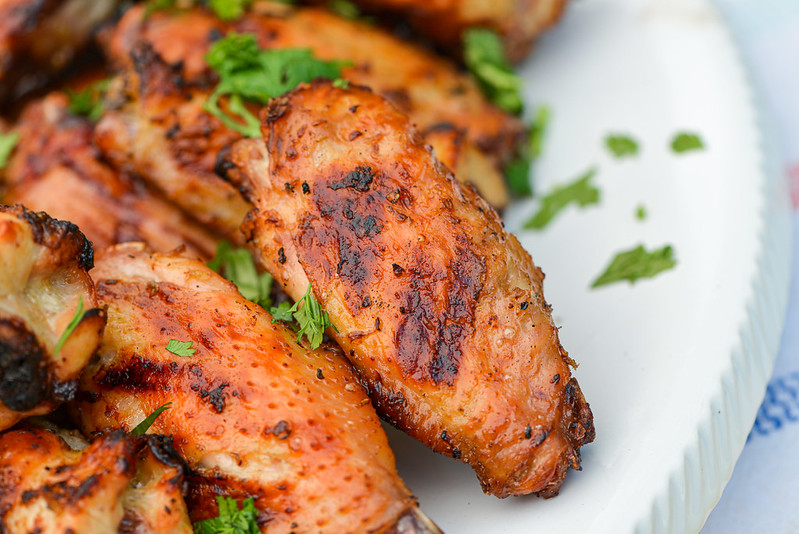 The core of this menu was a large batch of mojo sauce—a Cuban creation made primarily of sour orange juice and garlic—that got divided between three different dishes. The first of those were these mojo wings, which I knew I would love based on my unending adoration for rotisserie mojo chicken. Without the self-basting action of spit roasting, the wings did not reach quite the same level of awesomeness, but they were still great none-the-less with a super citrusy and garlicky skin whose intense flavor made up for lack of crispness. 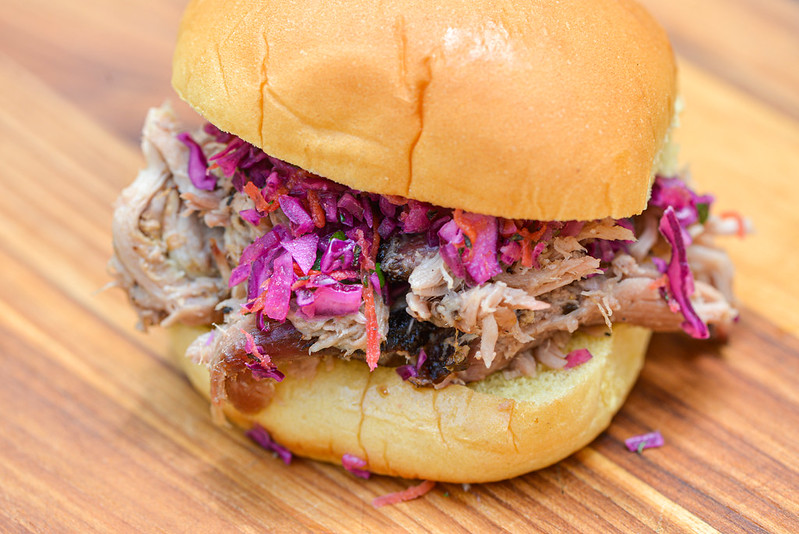 The second item was mojo pulled pork, where I used a variation of a mojo sauce recipe to create an injection that seasoned the meat from the inside. I paired that with a sugary rub that created a dark bark which added a good touch of sweetness to the light sour notes in the juicy pork. It got even better when formed into a sandwich and topped with a red cabbage slaw that had a mojo dressing, really bringing the flavor I was after to the forefront. 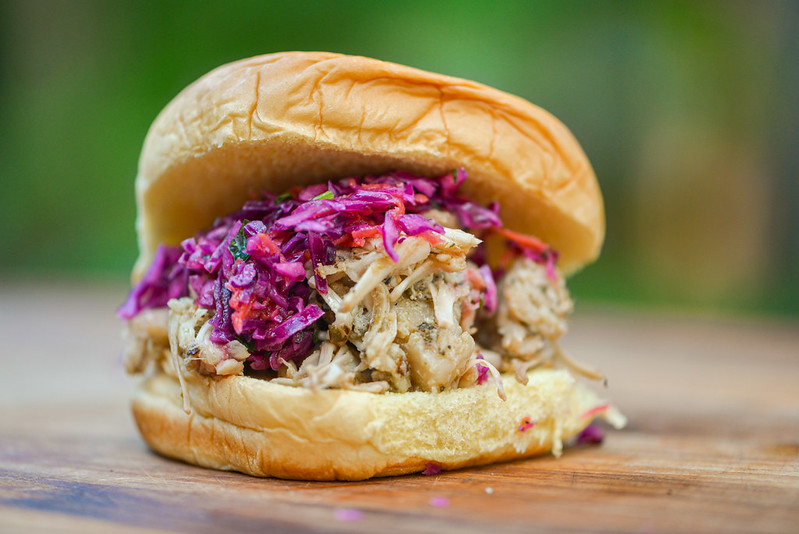 Finally, I didn't want the vegetarian constituency to miss out, so I made a version of the mojo pork with jackfruit instead. Having done a barbecue jackfruit previously that was very well received, I kept the same process, just subbing out the barbecue sauce for mojo. People were actually confused which was pork and which was jackfruit just by looking at it, but the jackfruit actually delivered a more intense mojo flavor as more sauce was able to get embedded into the fruit than the pork. 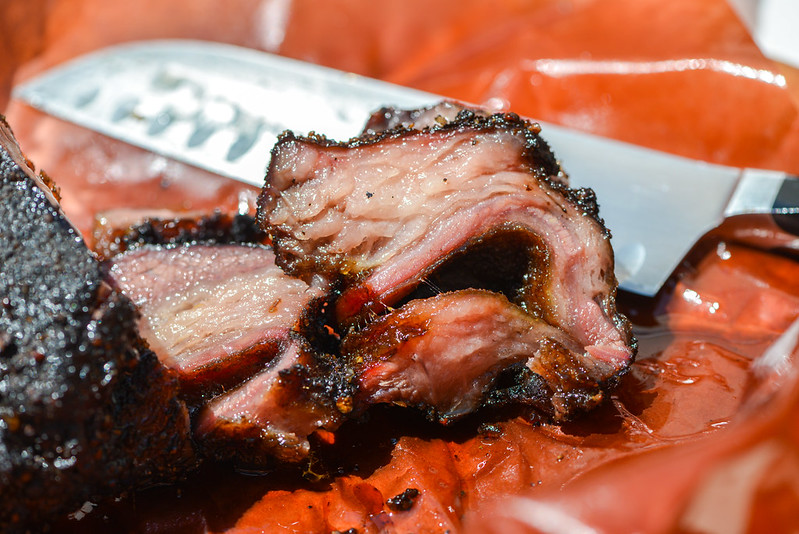 I probably could have ended the main course offerings there and have had a happy crowd, but I really wanted some Texas-style barbecue too, so kept on cooking. I normally would have smoked up a brisket for an occasion like this, but I didn't not need another monster cut of meat, so I picked up a couple small pieces of beef cheeks instead. I have never cooked these before, but they were certainly after my heart with an immense amount of fat that became soft and luscious after smoked for about seven hours. Paired with the black pepper kick of the simple salt and pepper rub, I was in heaven eating these cheeks. 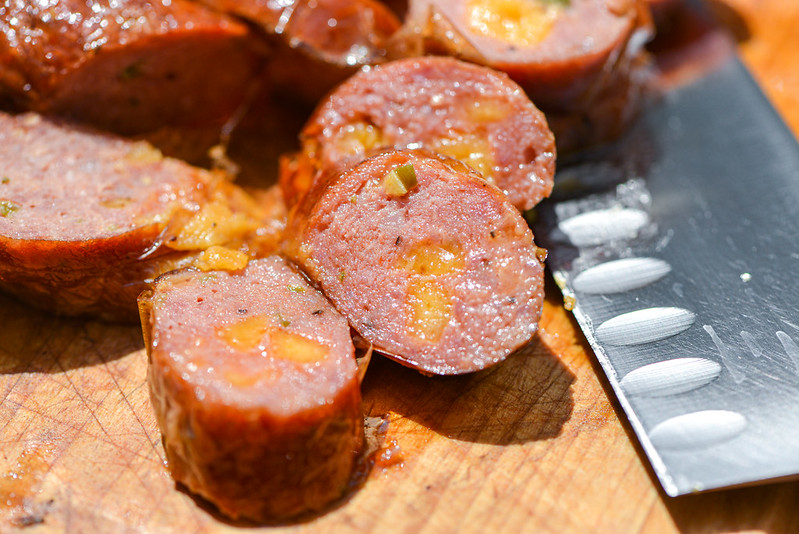 With smaller crowds, I dropped my sausage making efforts altogether because doing sausage in small batches is just not worth the effort in my opinion. So now that I was going to have 25-30 people in attendance, I wanted to get back on the sausage wagon and worked on my jalapeño and cheddar sausage recipe. With many more years of experience since I first posted a recipe for this variety of links, this was a much, much improved version that I can't wait to share with all of you in the near future. 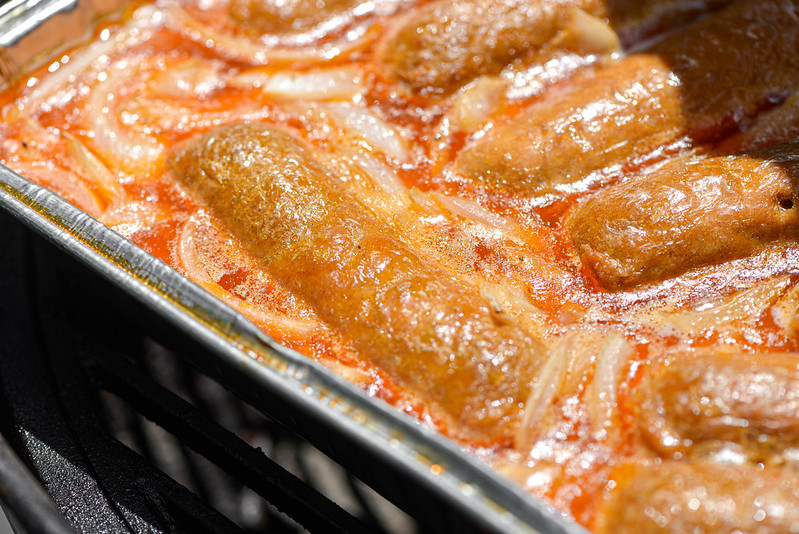 Like with the pulled pork, I wanted to offer a vegetarian sausage option, so tried out Beyond Meat's bratwurst. I cooked them as I would with meaty brats—in a pool of beer and onions, where they stay warm until charred quickly on the grill just before eating. I didn't not eat any of these, but the few folks who did seemed pretty happy with the end product, so I think I'll be trying some more of the plant-based sausage at future cookouts. 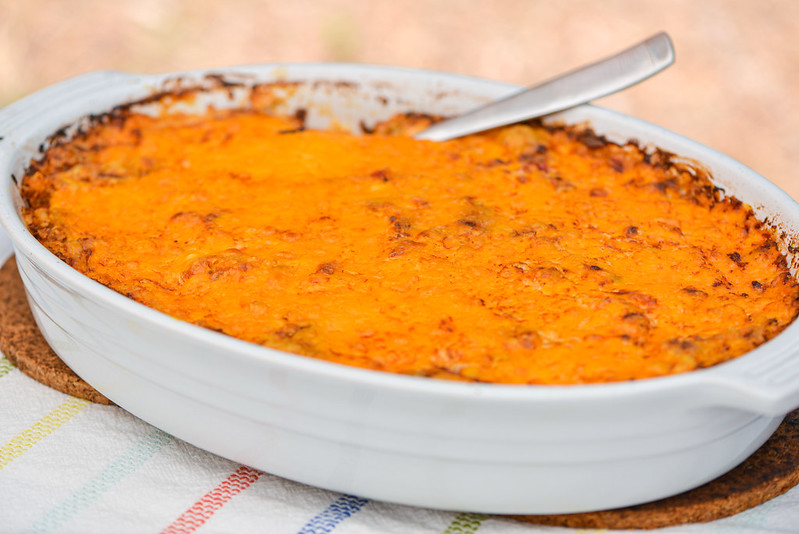 Moving on to sides, I only made a couple and asked my friends to help out fill out the menu from there. The one side that I made that was the most well received was this tater tot casserole, which I used the Truth Barbecue recipe for, just minus the bacon to make it vegetarian-friendly. It was an unusually hot May day, and that paired with the already heavy menu, I thought this casserole would be a bit much to add on top of those things, but everyone really loved it, leaving only a tiny bit left at the end of day. 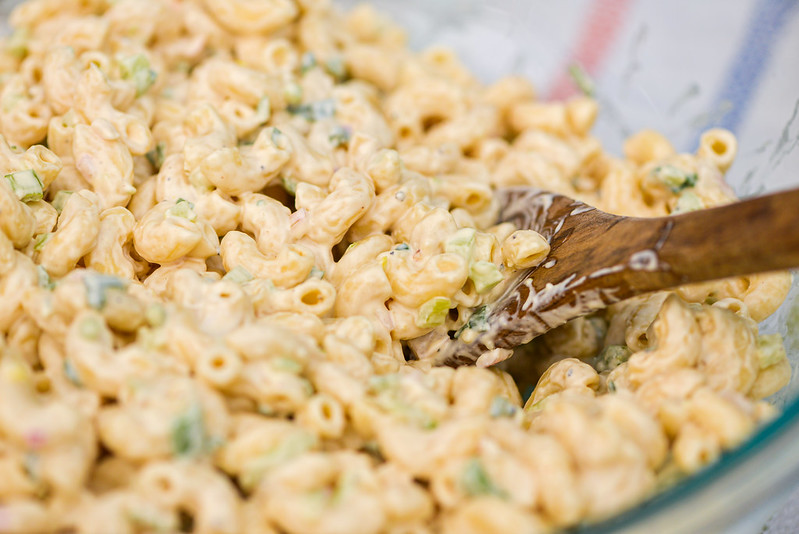 I personally bet on everyone wanting a cooling and tangy macaroni salad instead and did a double batch, only to have half still remaining once the crowd cleared out. This was my favorite macaroni salad recipe that embeds the macaroni with extra tang by coating the pasta in cider vinegar while it's still hot. Then the creamy mayo and sour cream dressing gets some nice crunch by way of shallots, celery, and scallions—it's a simple, but effective combo. 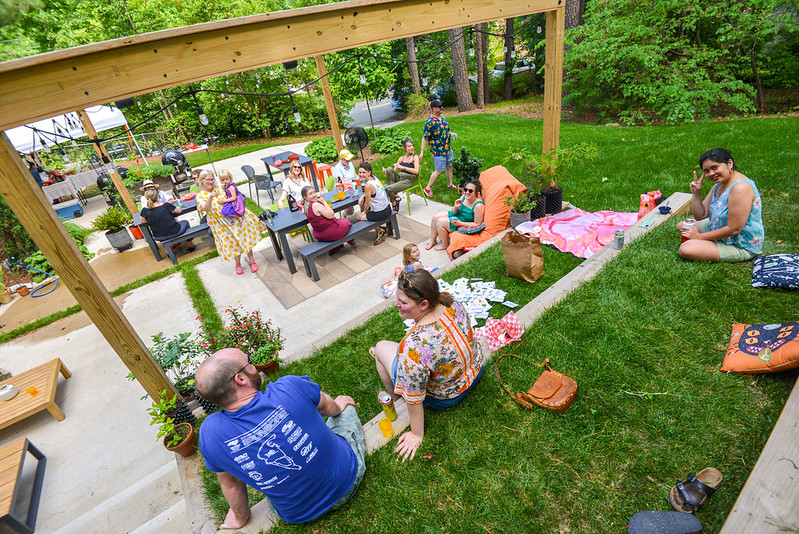 I was pretty concerned about having enough space for everyone to spread out if they wanted to, but with twenty-plus folks in attendance at once, I found things worked out quite well in that respect. This wasn't the full crowd we had on hand, but even in this one photo there's more friends than we've had at a single Meatwave since 2020. I was so happy everything worked out and I got see some folks that I haven't in so long, and best of all, being able to share collective good times and eats. Carne-val really just whet my appetite to get to the rest of the 2022 season!