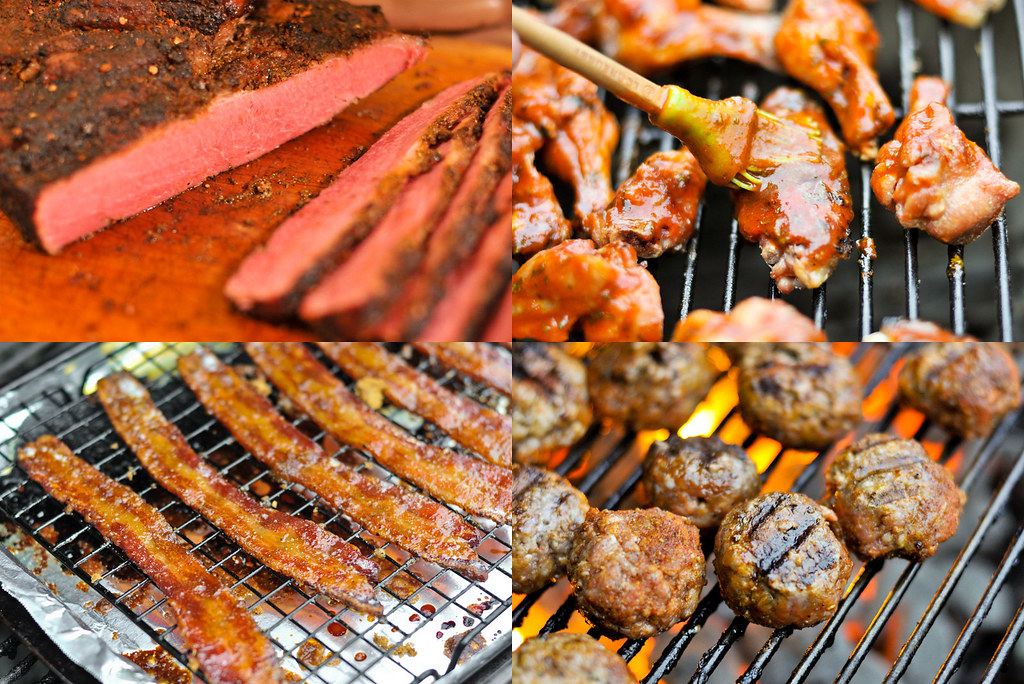 I'm not one to shy away from my birthday. Each year I plan myself a large blowout party, make an odd invitation, then mail them out to everyone I've ever been friends with. This has been the tradition for over 12 years, but this year I found myself about ready to take off for the holidays without a card produced—thanks mainly to my focused efforts on the barbecue team front—then came back from Texas pretty sick and in no mood to party. So I thought this was the year the parties of Josh would come to a close, but then I found myself with a nearly 16 pound brisket that changed it all. 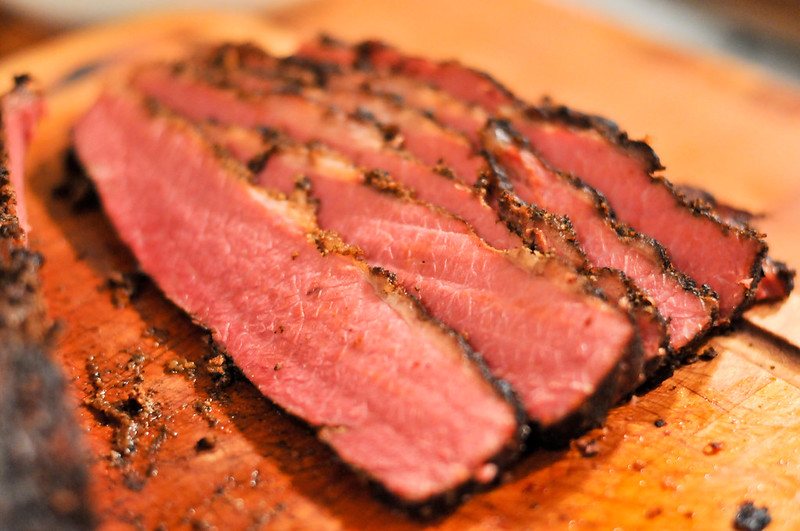 Brisket is usually one meat I have no problem acquiring from my local butcher—I normally get 2 or 3 packers taken out of the walk-in for my choosing. For some reason they were totally out when I went to go get one to make Montreal smoked meat two weekends ago. A search of a couple more butchers also proved fruitless, then finally I found one that had a lone brisket remaining, and it was a real mammoth. While I was looking for a 10-12 pounder, I came home with a 16 pound beauty, promptly carved out at least three pounds of fat, then coated it in a dry cure. The next day, I realized even inviting a few people over, we'd never finish this beast, so being on the mend, I made a quick decision to throw myself a birthday party once again in the form of a Meatwave.

The Montreal smoked meat turned out pretty killer, improving on my pastrami from the summer. A 5 day cure was followed by a long stin int the smoker until the meat reached 165 degrees, then steamed until it hit 180 degrees. The brisket was then left on a low steam the entire day so it was always warm and moist anytime anyone wanted any. 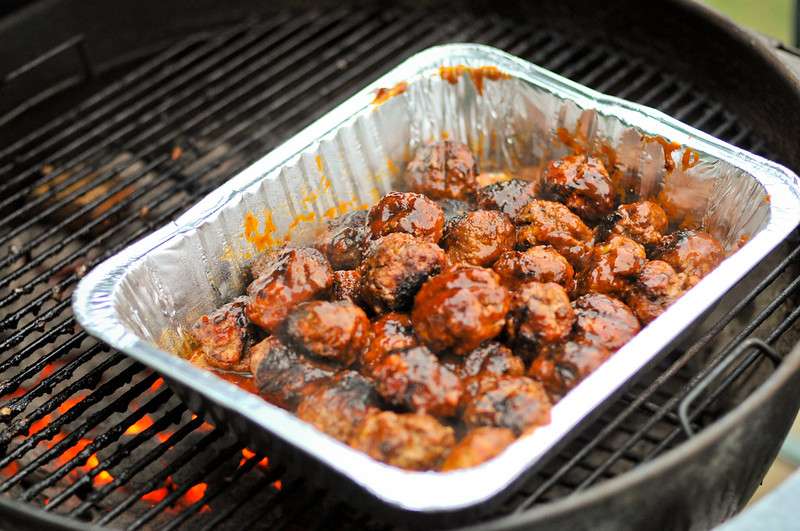 Of course, making my party an official Meatwave also meant I needed to go overboard with way more meat! Second up, it came in the form of barbecue meatballs. My recipe goal was to create a real version of barbecue meatballs, as opposed to frozen meatballs thrown in a crock pot with barbecue sauce. The beef and pork mixture was seasoned with a dry rub and grilled over direct heat until seared all over, then placed in a tray, tossed with barbecue sauce, and let cook until the sauce baked in. Unfortunately, I forgot about them on the grill and they dried out, but the flavor was all there, so if I had pulled them at the right time, I think they would have given the smoked meat a run for its money. 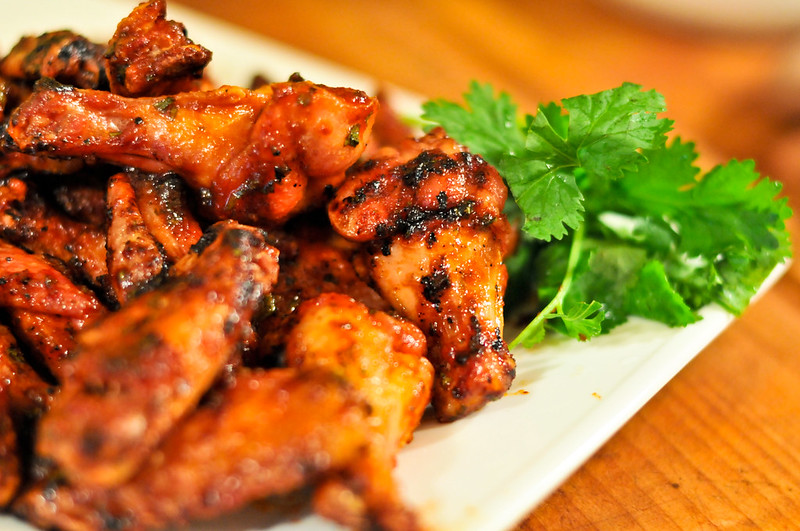 I also bought a mess of wings and divided them up into two different recipes. First were these Sriracha wings, that were brushed with the sauce on the grill, then also tossed in the sauce when done, for multiple levels of great Sriracha flavor. These were the clear stand out of the wings. 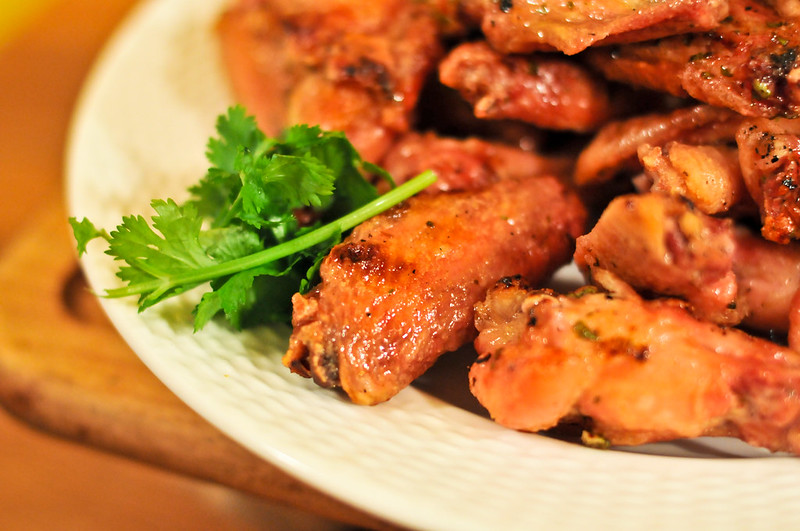 The second batch were finished with a jalapeno-honey hot sauce. My homemade jalapeno hot sauce was so hot that I tempered it with honey, but it ended up being a little too much, as these were pretty sweet on first taste, with the heat only hitting at the very end. I think I'm on to something here, so I plan to keep working on the recipe to get it just right. 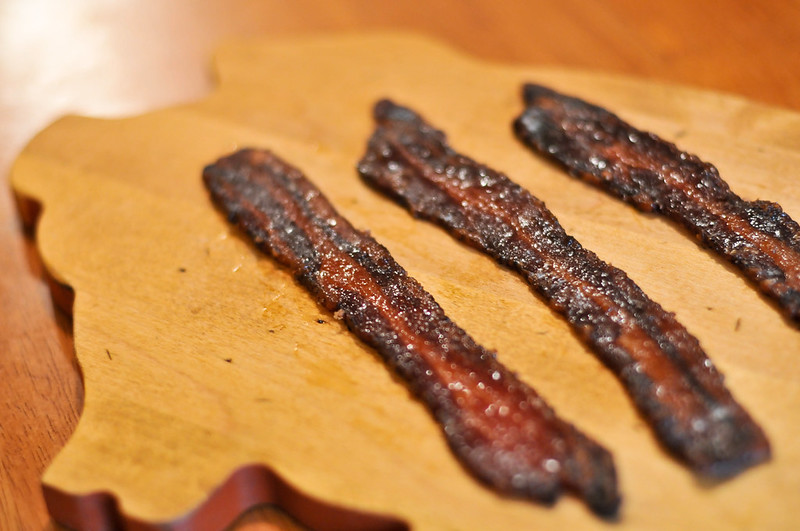 All of these foods were taking longer than I had anticipated to be ready, and I started to get scared I'd have nothing ready when people arrive, a no-no in throwing a good barbecue. Luckily, this pig candy came off the grill just as the doorbell first rang, then quickly disappeared. No worries though, I already had another batch cooking for the fashionable late crowd. 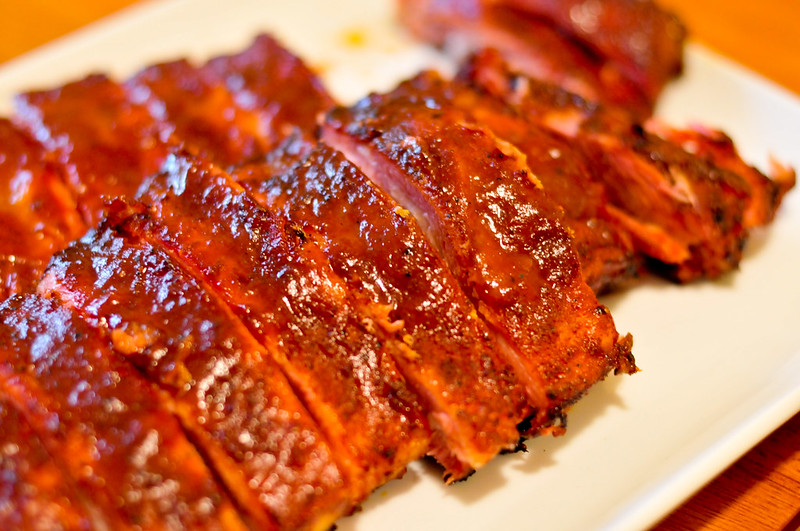 I had originally planned to get some Canadian bacon on the smoker with the Montreal smoked meat, but I didn't get it together in time. Not one to let smoker space go unfilled, I picked up three racks of spare ribs and used them to keep working on my competition recipe. My previous batch was pretty awesome, but too spicy for the sweet teeth of competition judges. These delivered on the sweet, but the lack of heat made them too one note in my opinion. Guess I just have to grab a few more racks and try to find that perfect balance before the first competition at the end of March. 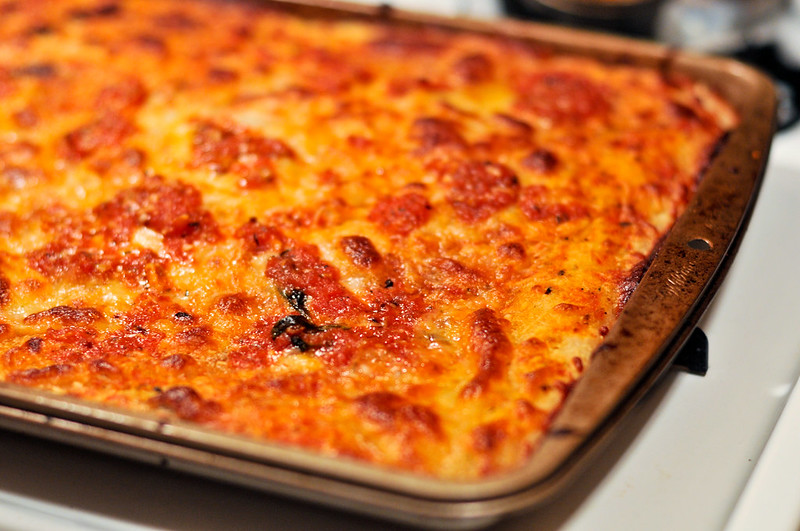 So much meat, I totally had nothing for non-meat eaters this time around. Adam fixed that with this excellent pan pizza. It was my birthday, so I stole the first corner slice, which I savored for its incredibly rich and flavorful crust. 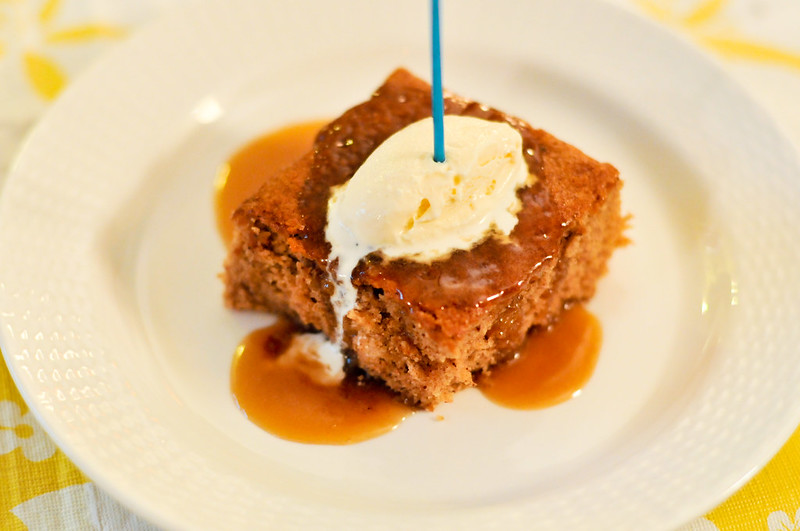 Kristin was on cake duty, baking up one of my favorites—Baby Jesus Cake. While that's the name given to it at a local Italian favorite, Vesta, it's more commonly known as stick toffee putting. Served warm with a dollop of ice cream, it's just heavenly. 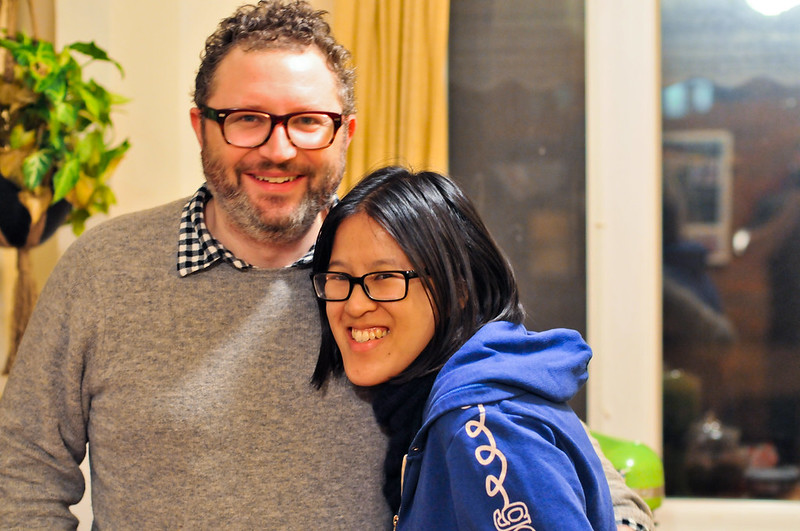 Spending my birthday eating meat is certainly a great day for me, but having my friends there is what makes it special. I was happy Adam and Claire made it by, not just for that great pan pizza, but they're the best to both bemoan and celebrate the ups and down of Ditmars-area Astoria (we got a shittiest 7-Eleven ever, but there's supposed to be a good ramen place opening next month). 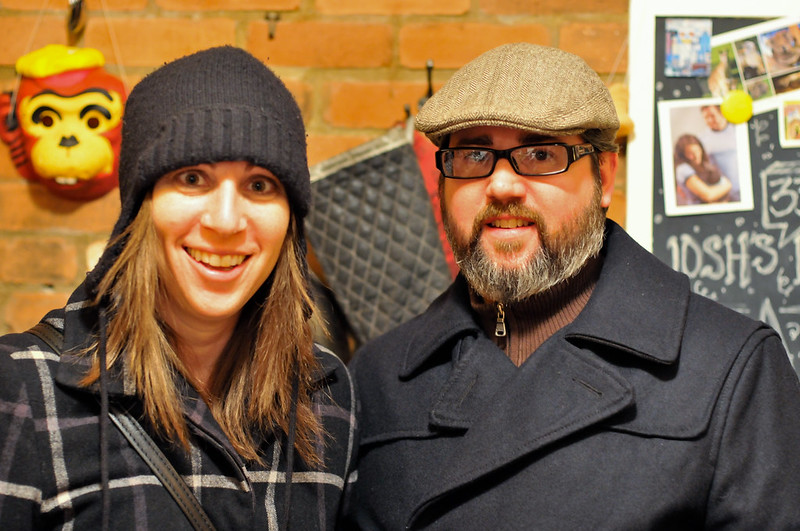 A super special and surprise addition was Ruth and Mark. Coming all the way DC, Ruth has been on the Meatwave list from the beginning, but made her first appearance just now. It was great having them and catching up and talking shop—Marl just so happens to have excellent taste in grills. 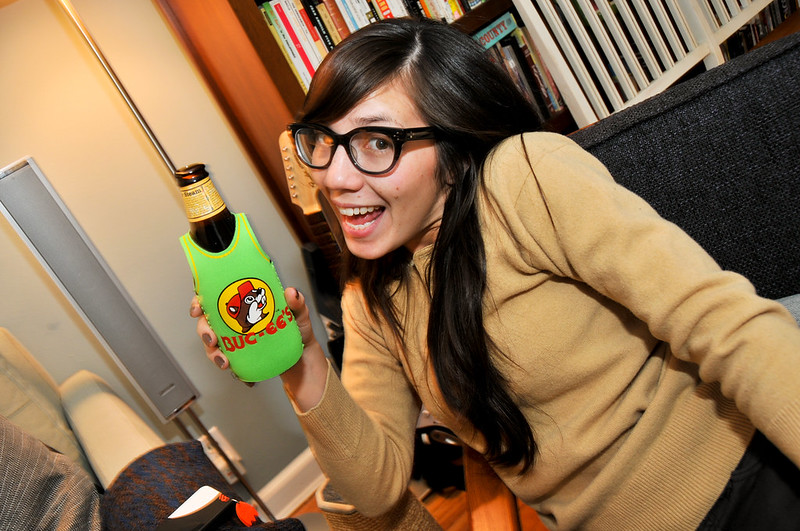 I can always count on Marissa and Joe to come out for some meat. Here's Marissa showing off the spoils of my recent bout in Texas, the greatest beer koozie ever from the best rest step ever—Buc-ee's. 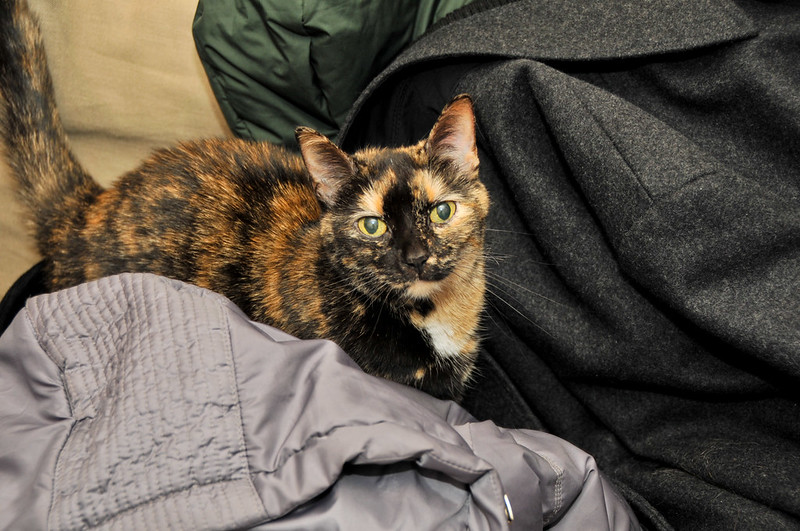 My lovely cats, Kate and Bianca, rarely play a part in the Meatwaves, as we keep them holed up in the bedroom to avoid them getting out of the house with all the comings and goings. I had them secured in the room for this party too, but at some point they escaped. Kate then settled into the massive coat pile and protected her territory for the rest of the evening. 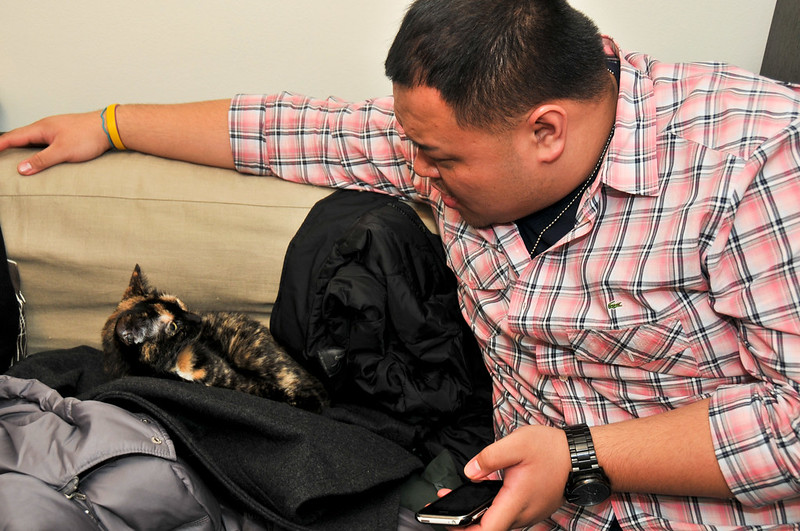 Tito getting a little too close for comfort. 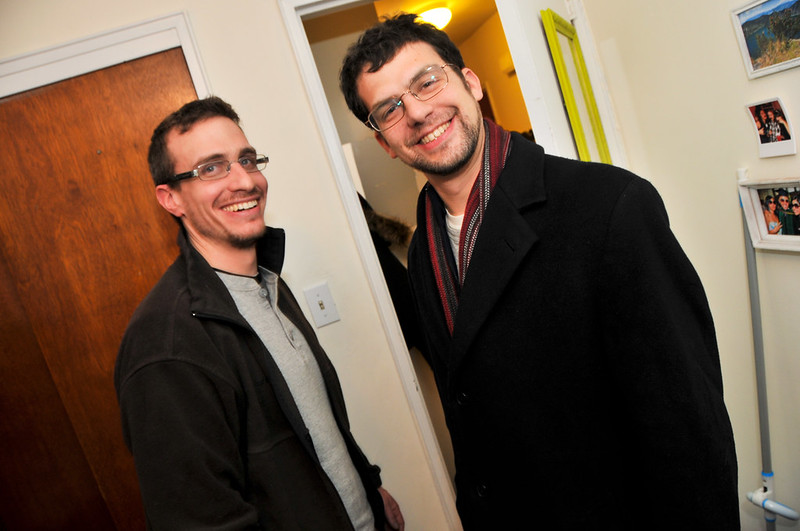 Mike is pretty much a given at all Meatwaves, but I was super physced Peter got to come. See, old man Kevin has been working him hard after a recent Kickstarter success. While Kevin was out doing research in Long Island, Pete got to stick to the man, drop work, and come party down. Ok, maybe that's not the real dynamic, but it's story I want to tell. 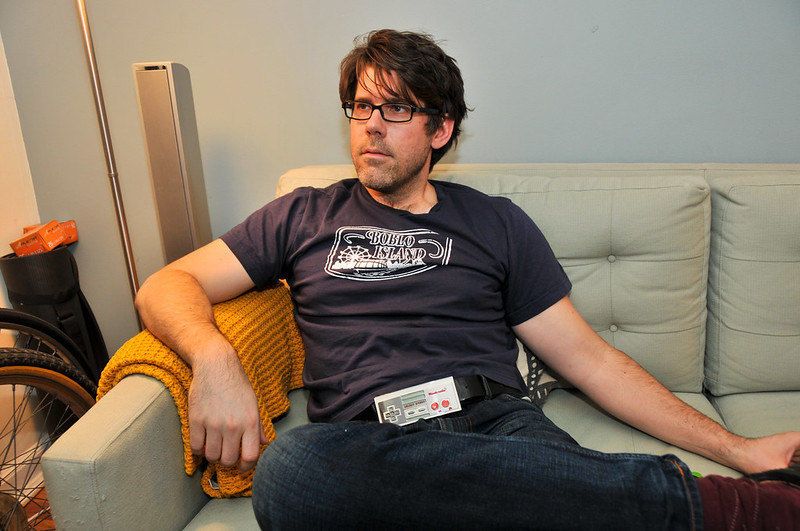 We can always look forward to Matt sporting a different, and totally awesome, belt buckle. So far, this was one of my favorites. 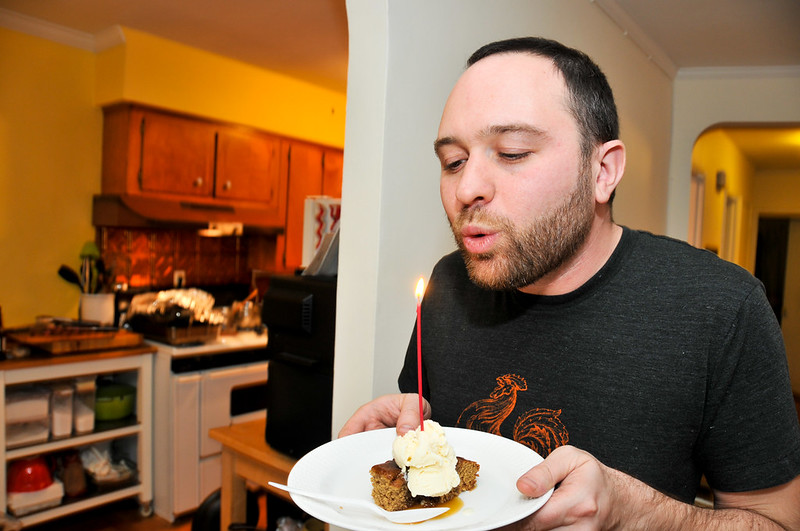 I'll close with me, who ended the night stuffed, a little buzzed, and totally happy. While my actually birthday earlier in the week was kinda shitty with being sick and a rough day at work, this Meatwave fixed all those bad memories and made this another killer year. There's also a lot to look forward to this year—I'm just starting to carve out the Meatwave calendar for the summer and making preparations to start working the competition circuit—and this party had to be the best way to start it out.