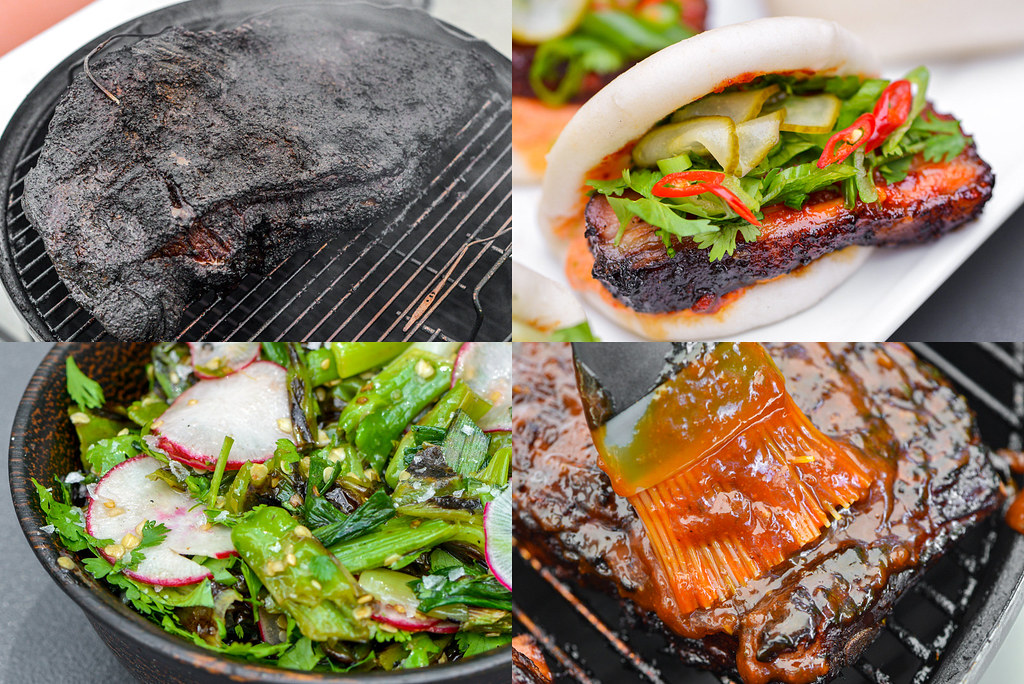 I played things pretty safe throughout the pandemic, but as we came closer to a year in, I told myself seeing my family would be an acceptable risk because it had just been too long since we had all been together. So I invited everyone down to Durham for Thanksgiving, but as the holiday drew closer and infections grew steadily worse, I called off the plans and decided it was worth waiting until we could be more assured of our collective safety. Well, like for most folks in the United States, that time has finally come and I put out the call to gather for Memorial Day weekend as an entire clan for the first time in over a year and half. Luckily there was no Thanksgiving repeat and we got to spend three great days together, just hanging out and and eating our way through the holiday weekend in what I consider a Meatwave of sorts that I aptly dubbed Meat Familia. 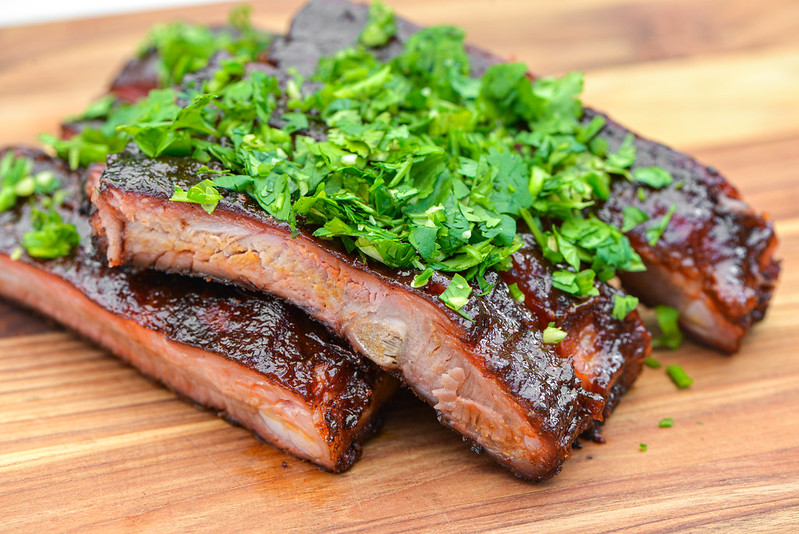 Wanting to maximize family time over recipe development, on our first day of backyard cooking I only tried out one new thing, honey-jalapeño ribs. These weren't a far cry from my standard rib recipes, but the sauce featured a strong fruity and spicy jalapeño component that was tamed by a large amount of honey. To further get that jalapeño flavor in, I adorned the finished ribs with a mixture of the fresh peppers, cilantro, and garlic. 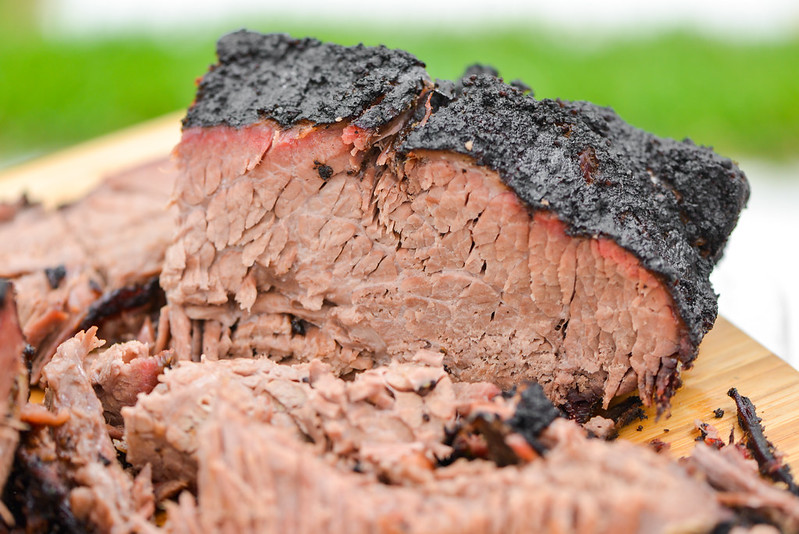 Last summer I really wanted brisket, so I made a 17-pound monster cut that only my wife and I were able to enjoy. It felt great to have people to share this summer's first brisket with, which I prepared in the ubiquitous Texas manner using only a salt and pepper rub. This one was slightly smaller, weighing in at 15 pounds, but that was still way more than my family of seven could finish in one sitting, so there's plenty of leftovers to make new recipes with down the road. 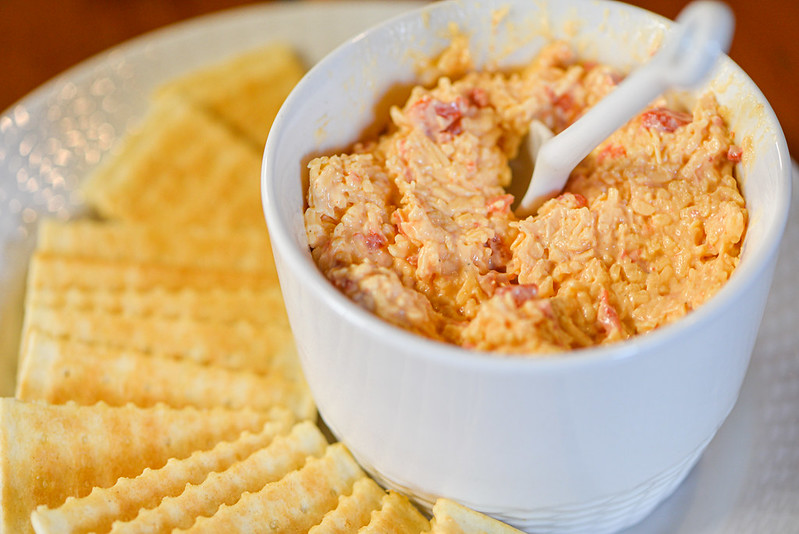 I kept the mains limited to those two meats, but went a bit overboard with the sides. Those started with a batch of pimento cheese, which was something I was able to put out while we awaited the main meal. Then what cheese we hd leftover served as a rich and fulfilling snack throughout the rest of the weekend. 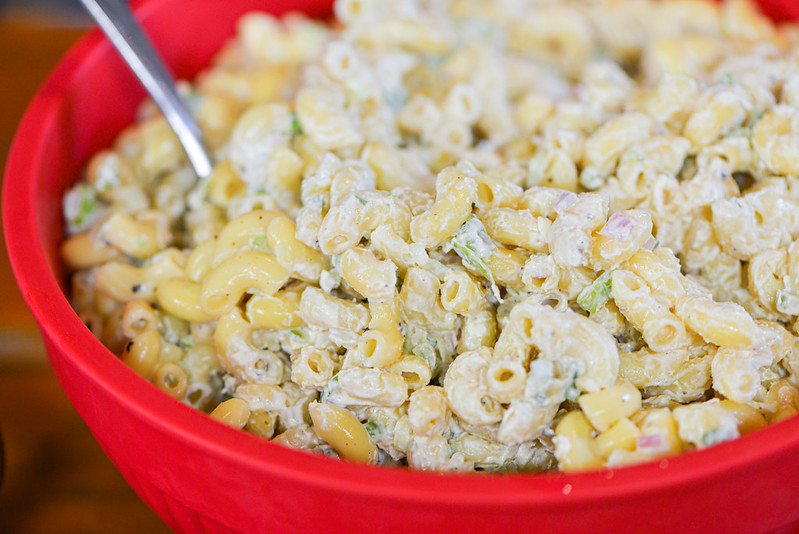 I wanted to try out a tater tot casserole this day, but my wife noted that it would be another really hot and heavy dish and what I really needed was something to add balance. So I made a creamy and tangy macaroni salad, which isn't all that light, but since it's cold and sufficiently acidic, it did provide contrast to all the fatty meats, so I was happy I went in this direction. 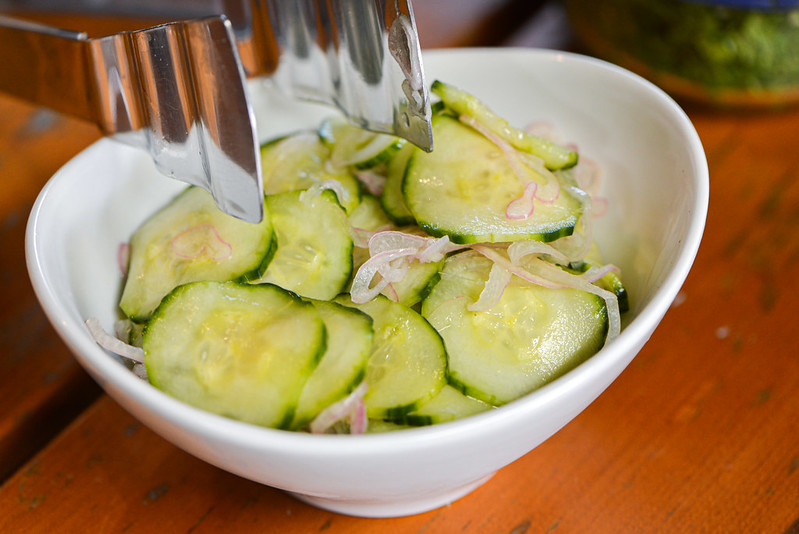 That mac salad ended up being the hit side of the day, but I had made this cucumber salad for a similar reason that it would help cut through the richness of the other foods. Being lighter eaters, I thought my family would go for this more, but it was sparsely consumed, leaving me with a fair amount that I've been eating at random times of the day since I find this sweet, tart, and cold side dish a very refreshing snack. 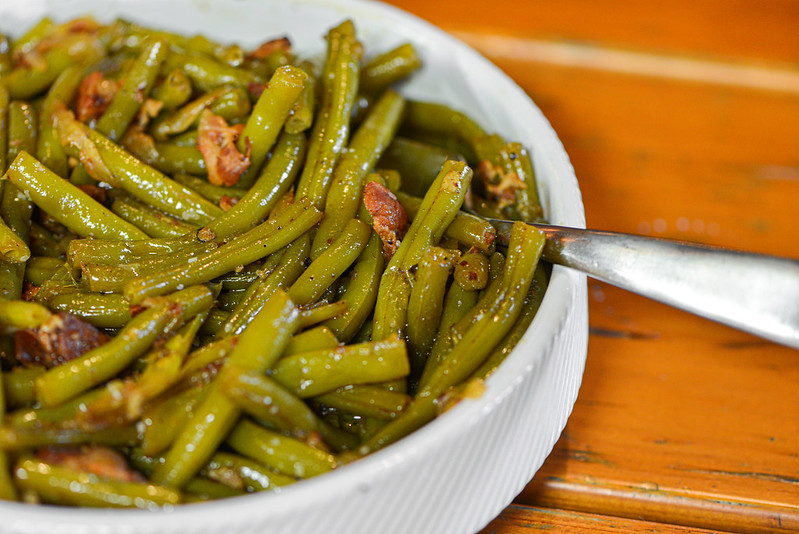 I wanted to get a green veggie in, so I went with green beans. I made one of my favorite recipes here, Kenji's bacon-braised green beans. I used to shun green beans that were anything but bright green and crisp tender, but once I tried this recipe, I became a convert to braised beans that get well embedded with their braising liquid's flavor. 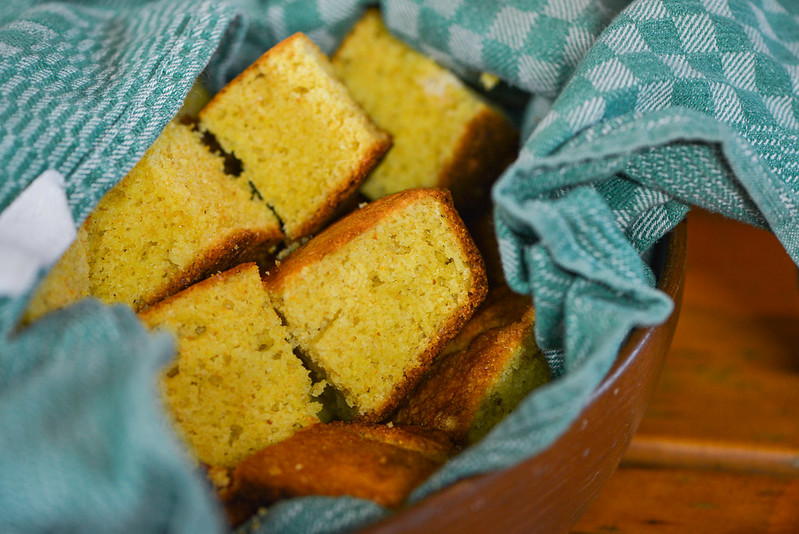 I can't have a barbecue feast without some type of bread, and while just some slices of Texas toast would have been the most fitting choice for this spread, I really wanted to cook up a batch of my sweet and moist Northern-style cornbread. This stuff is almost cake like, and I served it with honey butter, which just upped the sweet factor and added a good contrast to all the savory things happening in this meal. 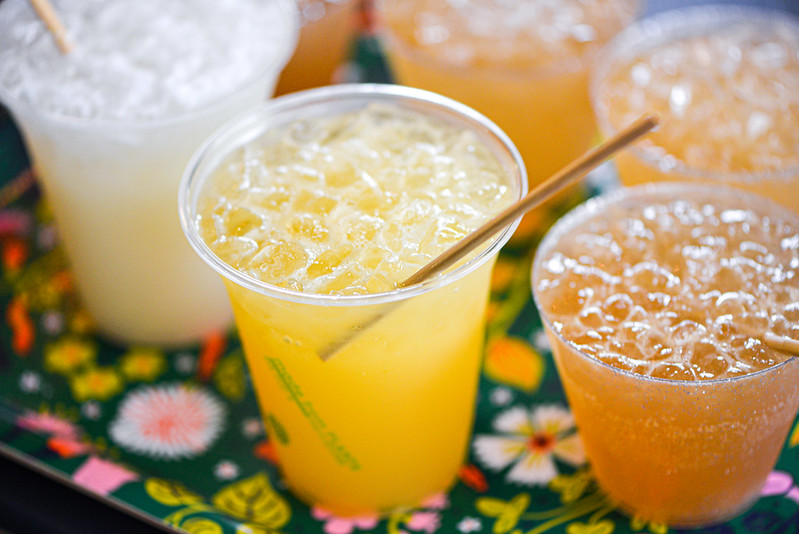 My sister's husband Chuck is a master of Tiki cocktails and he likes to bring the show on the road. He drove down from New York with a full bar packed in the car and kept the fruity and refreshing cocktails flowing all weekend. I'm mostly a social drinker, so I barely drank during the pandemic and kind of forgot what it felt like the morning after having six cocktails. These were so delicious that it was worth it though. 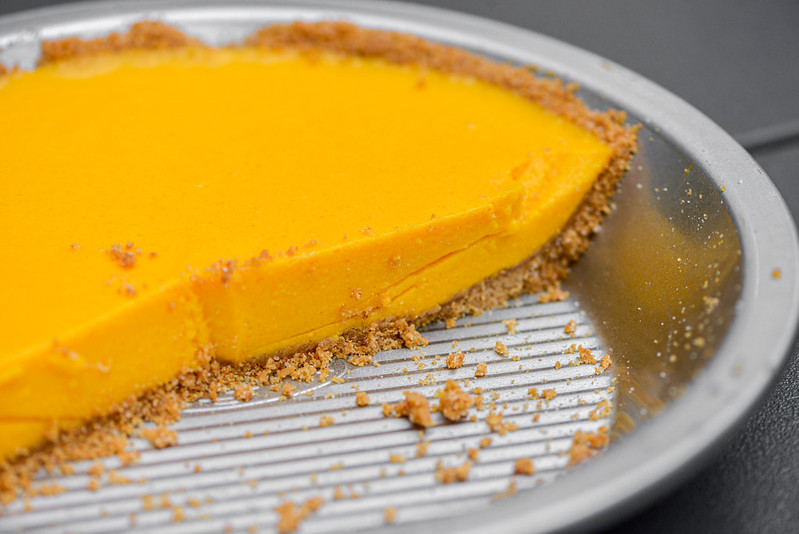 Chuck and Rachel were taking this weekend as a break from cooking, but they ended up getting in on the action still by making this mango pie with a graham cracker crust. This was the perfect dessert after the heavy meal since it was cold and sweet, providing a refreshing finale. 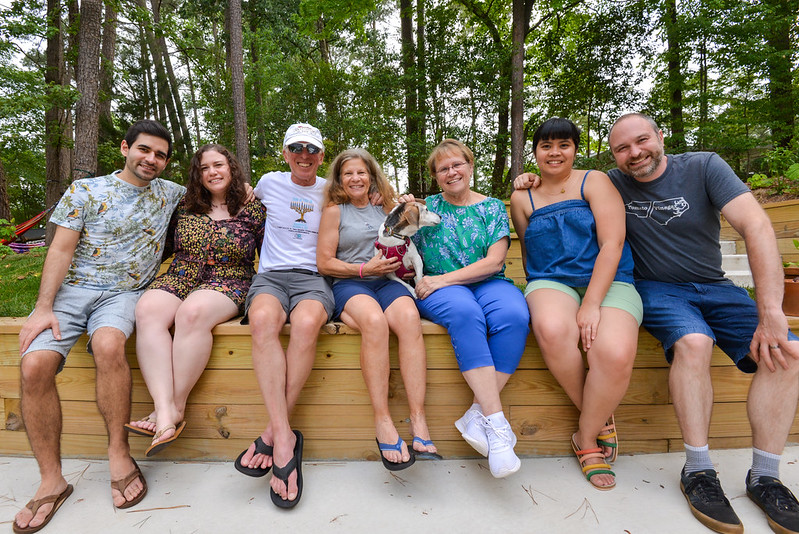 And here's the proof we were all together—Chuck, Rachel, Dad, Merrilee, Gracie, Mom, Kristin, and Me. It was supposed to thunderstorm all day on this Saturday, but the weather held out and we all got to fully enjoy the time together and the backyard space we had built over the pandemic. 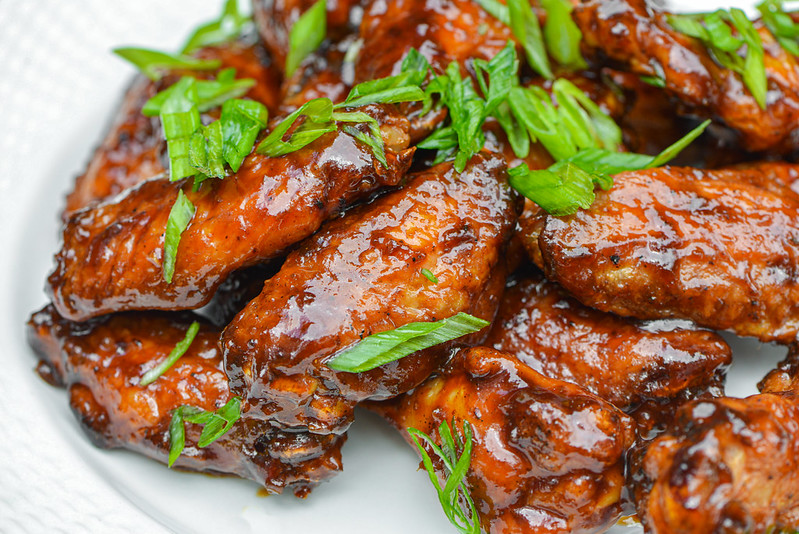 Following a bagel breakfast the next morning, my Dad and Merrilee took off to skip the traffic to come on Monday, and that left those of us remaining planning yet another cookout for Memorial Day itself. We decided to stay on theme with Chuck's drinks and made a Tiki-inspired menu, which began with these wings that were adorned with a sweet and tangy pineapple glaze. 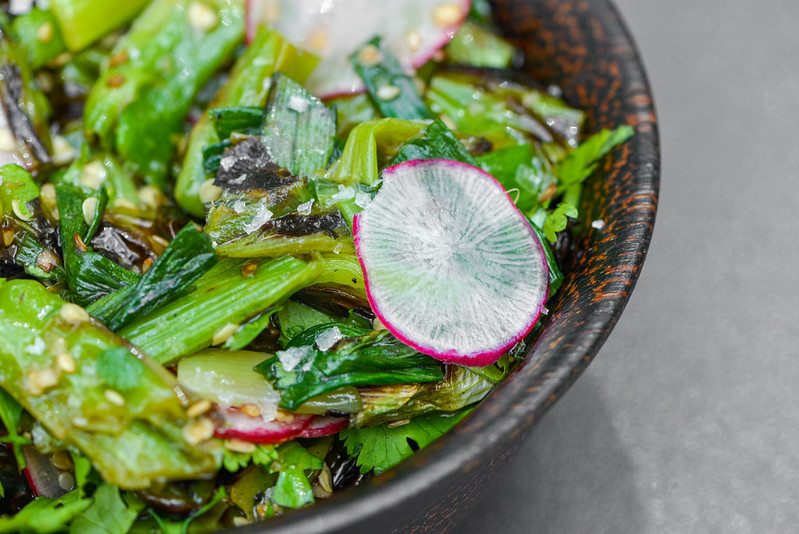 I made a salad to get some greens in and decided to try out an idea I had for a grilled shishito and scallion combo. It ended up working out well, getting an herbal boost from cilantro, cool crispness from radishes, and bright and roasted flavor from a sesame-lime dressing. 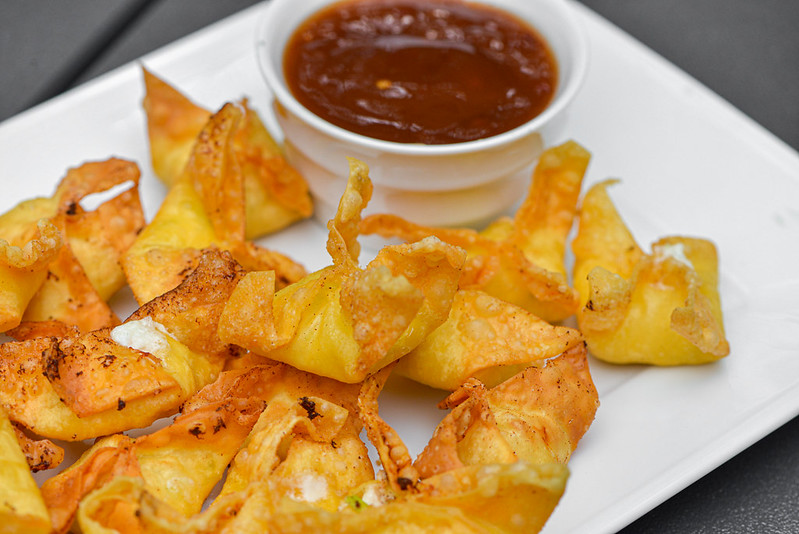 This menu was formed by requests, and Chuck asked for crab rangoon and I was only too happy to oblige. Learning how to make some American-Chinese classics at home has been a thing for me during the pandemic, and crab rangoon has been part of that. I've actually done multiple batches of these in the past year and have found my favorite shape and crab-to-cream cheese ratio, which give this homemade version a lot more crab flavor than what you get most of the time when eating out. 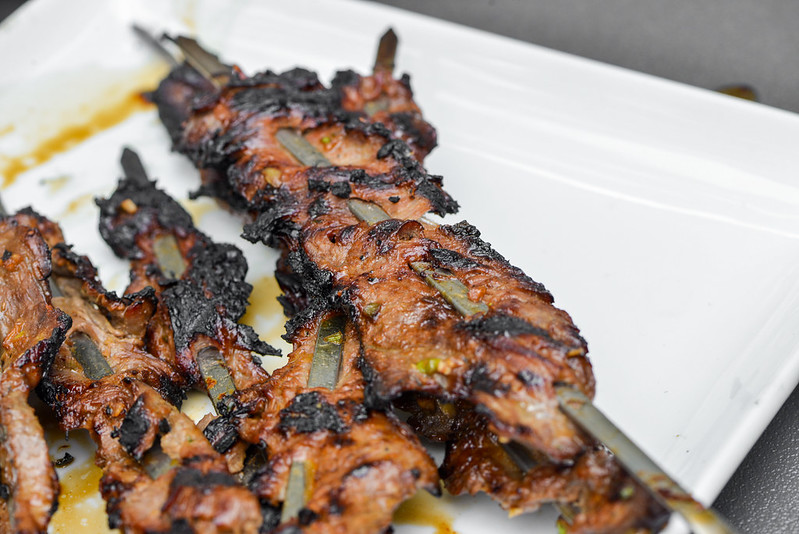 My Sister requested these hoisin marinated flank steak skewers, which have been in the rotation from the earliest days of The Meatwave. They're also a favorite for me and the wife, and Kris especially likes them with a lot of char which actually has a great concentrated sweetness that doesn't leave it tasting burnt even if the appearance might lead you to believe they are. 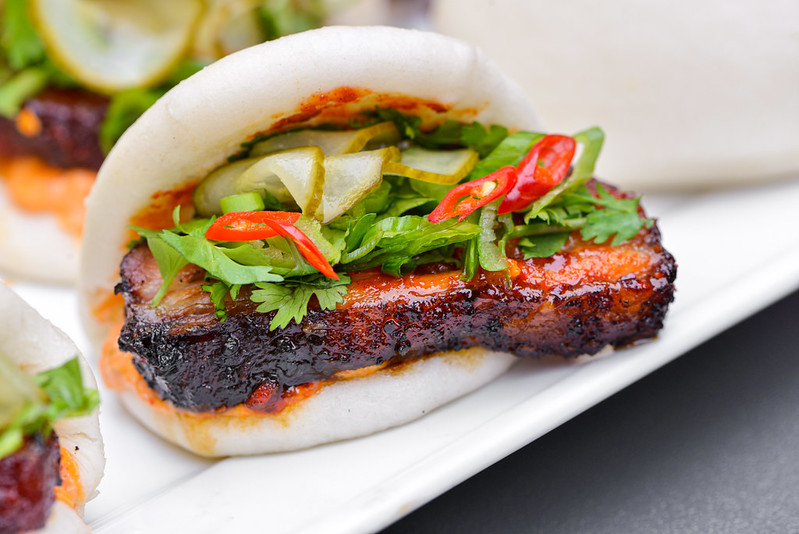 The week prior to my family coming, we hosted Kris's brother and his wife and I devised a recipe for spicy pork belly buns to eat with them that turned out so well that I wanted to share this dish with my family too. This photo was from that first cooking session, but I picked up another piece of pork belly and recreated these luscious and spicy baos, giving me confirmation the recipe is repeatable along with making me super happy to get to have these again in such a short span of time. 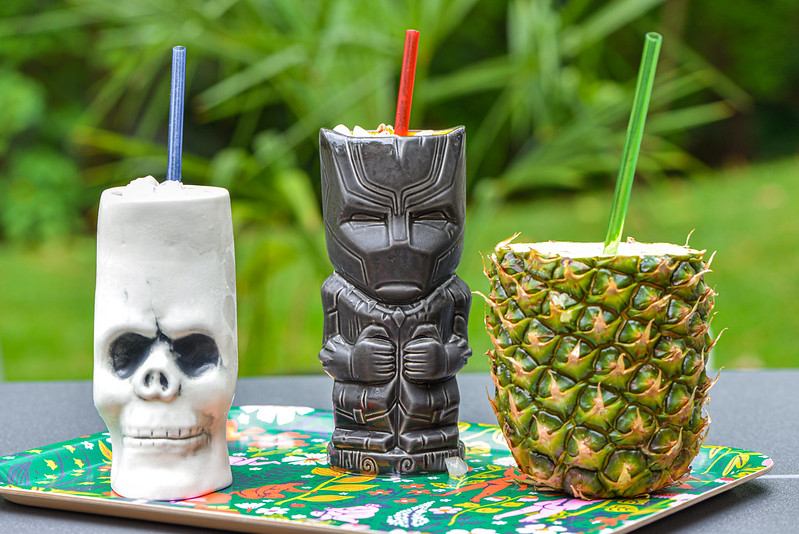 And it wouldn't be a Tiki party without the drinks. I personally don't make a lot of Tiki cocktails, so my Tiki barware doesn't get much use. I enjoyed washing them out and getting to use them for their intended purpose with multiple rounds of drinks on this Memorial Day—although I held back more than I did on Saturday because I had to work the next day.

And there you have it, a full weekend of good eats and long overdue family time. It also very much felt like a Meatwave with the amount I cooked, which is making me feel like I'm getting even closer now to biting the bullet and starting things up full swing again.