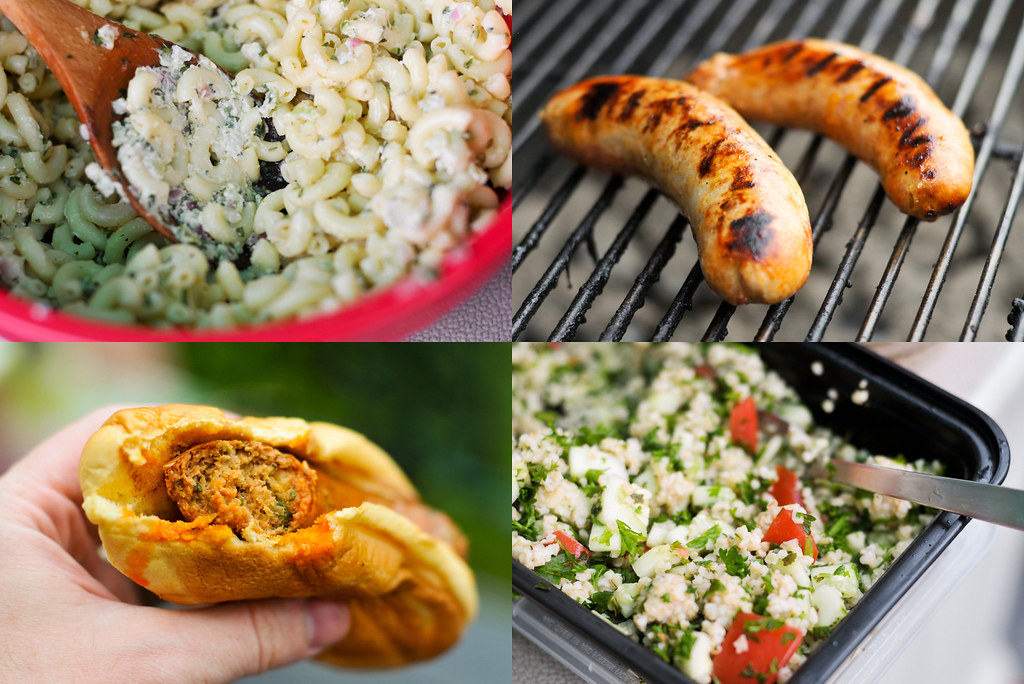 Nothing stops the meat! That's my mantra through rain, sleet, or snow—the meat must go on. The proof came through quite clearly at Meat in the Middle, when a passing shower became a soaking rain for the whole afternoon. Through the downpour, the meat never stopped rolling off the grill, with everyone getting their fair share of meat between two buns in the end. 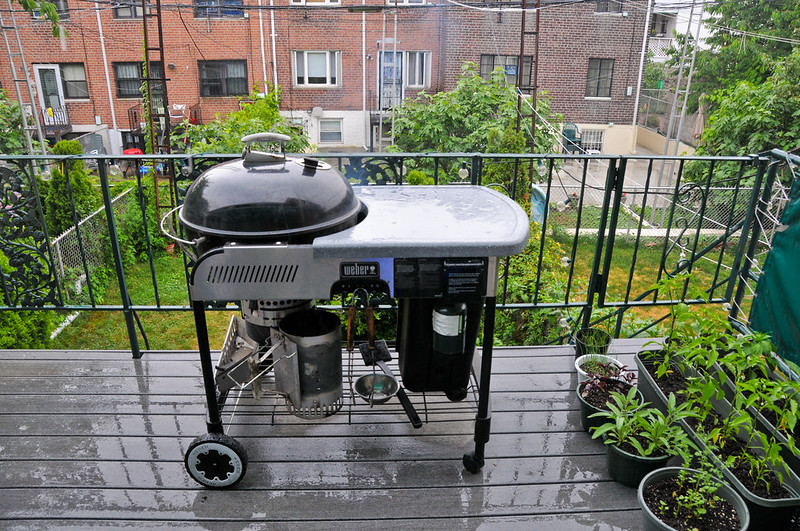 The meat never ceased due to rain, but my photographing did. Therefore, despite just about everyone partaking in one of the excellent burgers I had ground just hours before, I failed to get a photo of it. The fatty ground chuck created some incredibly juicy and flavorful patties, which my grandfather raved how it put a burger he had yesterday to shame. So just imagine a beautifully grilled burger, piled on a buttered and toasted bun with some grilled onions, lettuce, tomatoes and squirt of ketchup peeking out from on top of it all. Now that you have the image, are you hungry yet? 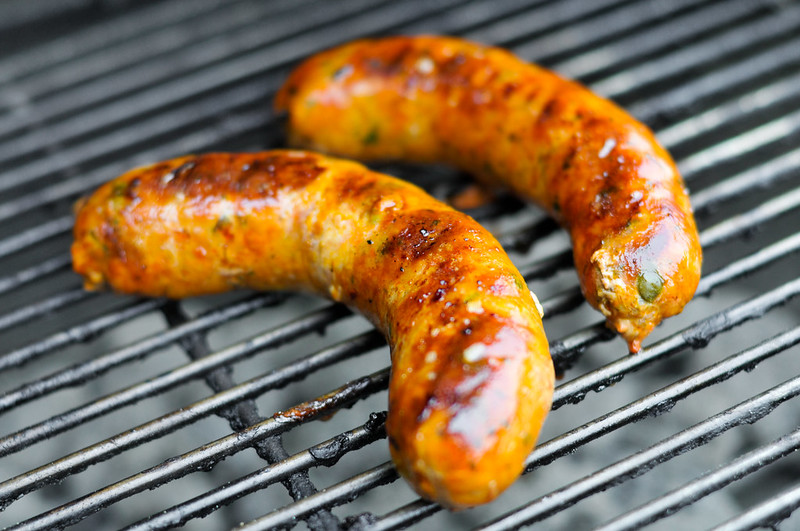 Everyone pretty much started with a burger before moving on to the sausage portion of the day. It's because of this, that sausages were still being grilled when the rain let up, and I was able to snap a few nice shots.

The first of two sausages were spicy roasted pobalano links. Taken from the excellent Charcuterie: The Craft of Salting, Smoking, and Curing, these babies were right up my ally with two types of chilies that produced a mild, yet robust spiciness. Representing my best attempt at a pork sausages to date, these were a thrill put away, deep down in my tummy. 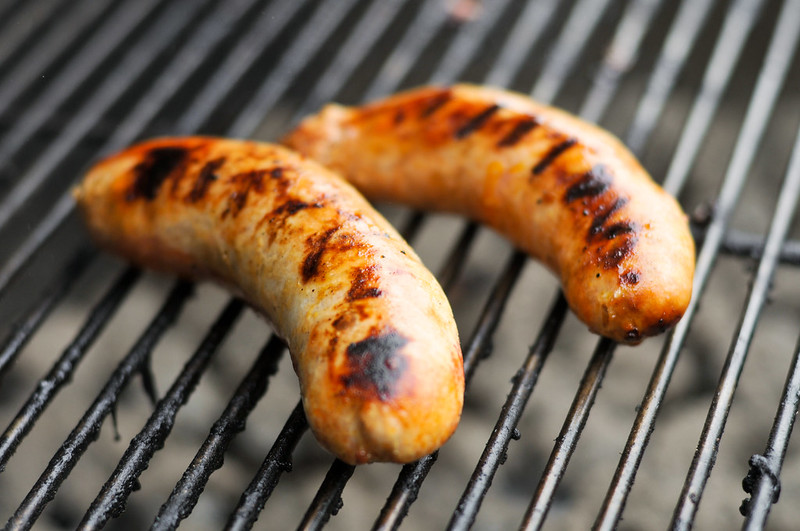 The second sausage offering were of a buffalo chicken variety. Super Meatwaver Marissa has been singing the praises (quite literally) of buffalo chicken sausage for years now. I've developed an excellent buffalo sauce and chicken sausages are my specialty, but for some reason the two combined here with a less than stellar result.

I'm pointing my finger at the butter in the buffalo sauce, which was an added fat that was probably not needed. I theorize that the butter was the culprit behind exploding links and a texture that was thrown out of harmony. Thinking I've identified my mistake, I'm ready to take a second shot at these and get the upper hand in buffalo chicken sausage making. 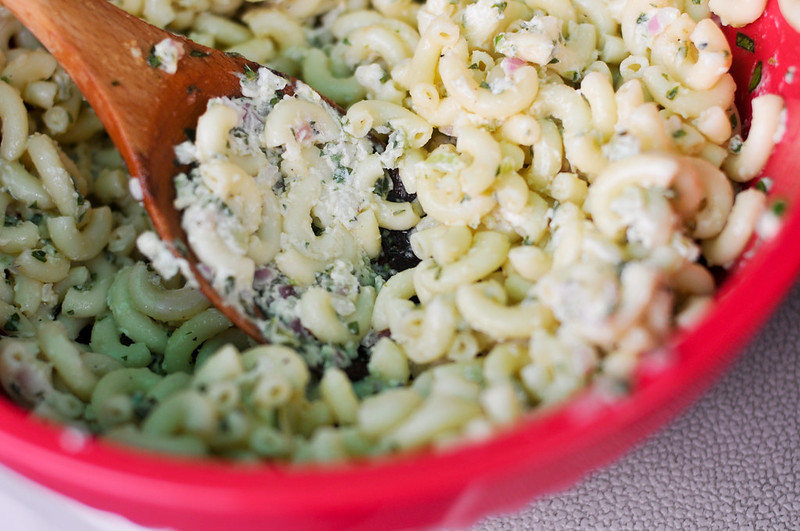 Hot dogs, hamburgers, and sausages equaled a classic cookout, and brought me to making a classic side—macaroni salad. Not a favorite side of mine, but pleasant none-the-less, I realized that in all these years, I've never made it. In contrast to my rather lackluster approach to making the salad, it was very well received by the Meatwavers who gobbled it up. Such a quick and easy side that's also a crowd pleaser is a good thing to have on hand, so I plan on sharing out the recipe soon, even if it is *gasp* meatless. 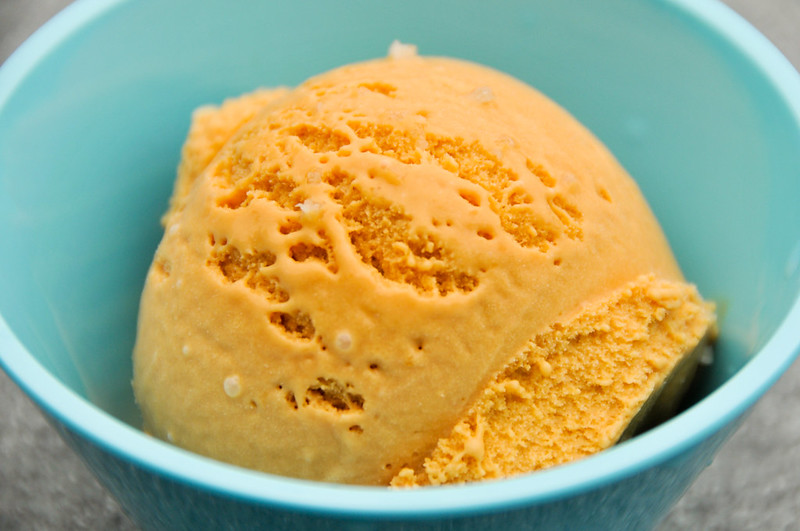 Then comes the piece de resistance of the afternoon, salted caramel ice cream. So rich and luscious, salty and sweet, this was an ice cream of the gods. I thought I had achieved ice cream nirvana with bacon ice cream, but that's going to have to take second billing from now behind the salted caramel. 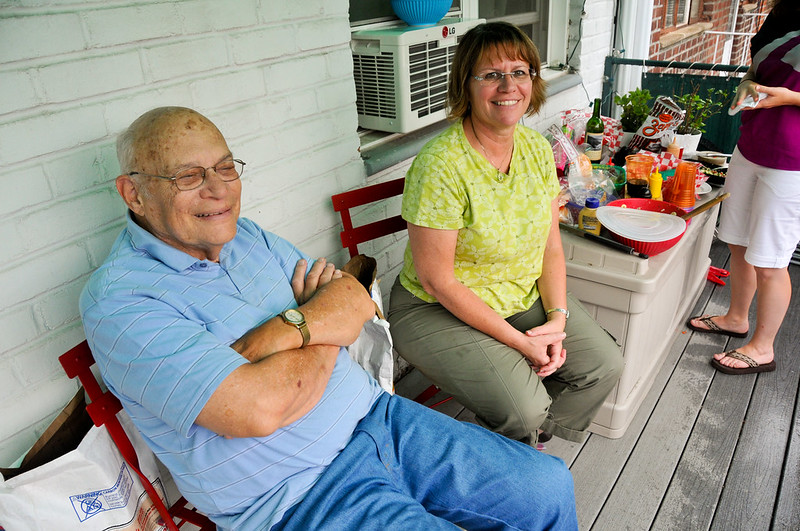 This Meatwave was one of the rare family affairs, with my mom, Poppy, and sister all coming to chow down on the meat. Like any good mom, mine is my biggest supporter, and having her around makes me feel like a wold class chef that can do no wrong. I enjoy criticism as well as accolades—without it, I'd never become a better cook—but sometimes it's nice to have that endearing outpouring of praise with disregard to whether the food is actually any good or not. 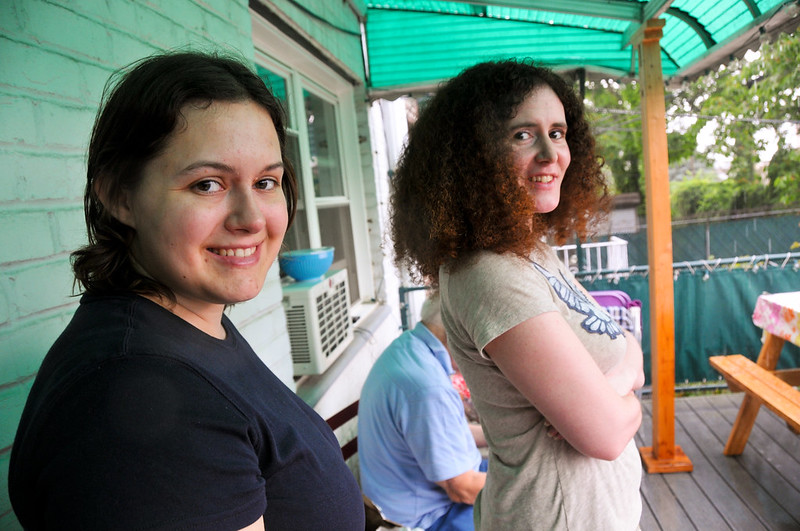 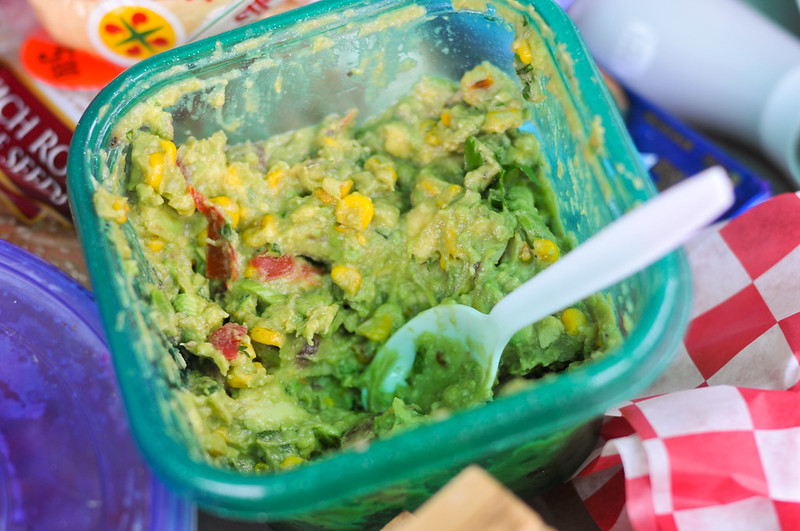 This Meatwave welcomed back our most prolific cook (besides myself), Tea. She brought with her some guacamole and chips, coleslaw, and friend, Jess. Shhh, don't tell anyone...but because the rain kept the crowds away, that meant the guac went unfinished and I greedily sneaked it away to my fridge so I can keep enjoying it throughout the week. 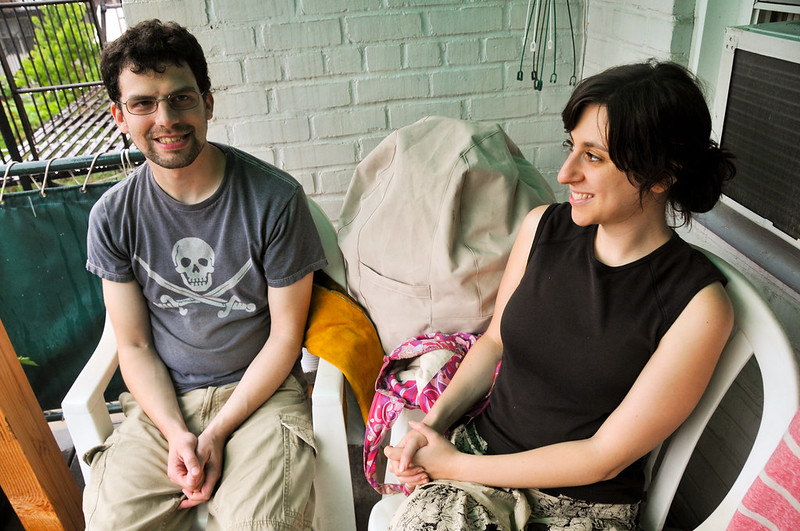 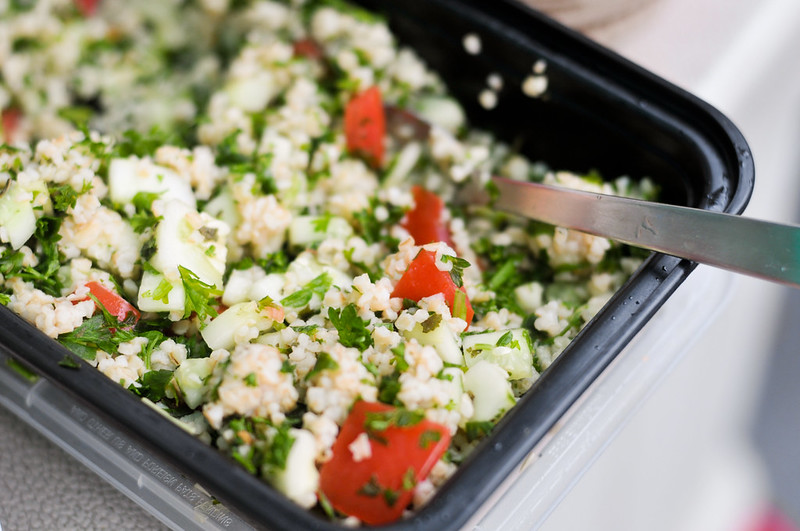 In special attendance was Amy. The man has been responsible for keeping Amy away from the Meatwave almost all of the time, but this weekend she showed him who's boss, the meat! Coming in tow with meat-lover Mike and some of the famous Tabouli De MFS, I was happy that they decided to spend an unusual free Sunday loading on hot beef injections. 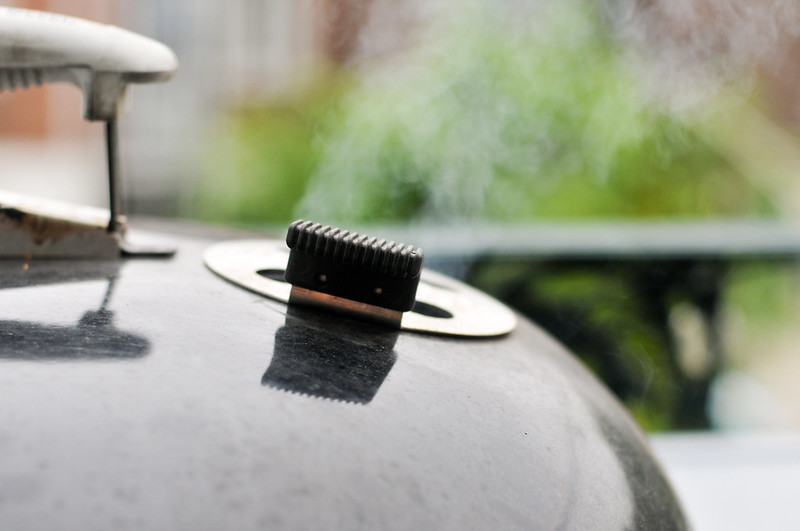 When waterfalls start gushing from the heavens above and all you can think about is meat, you'll know where to find it. Our love for the meat knows no bounds, and neither should the times that we can enjoy it. Although the show went on through the rain, I'm looking forward to a hopefully drier Meat-a-thon coming up all weekend.