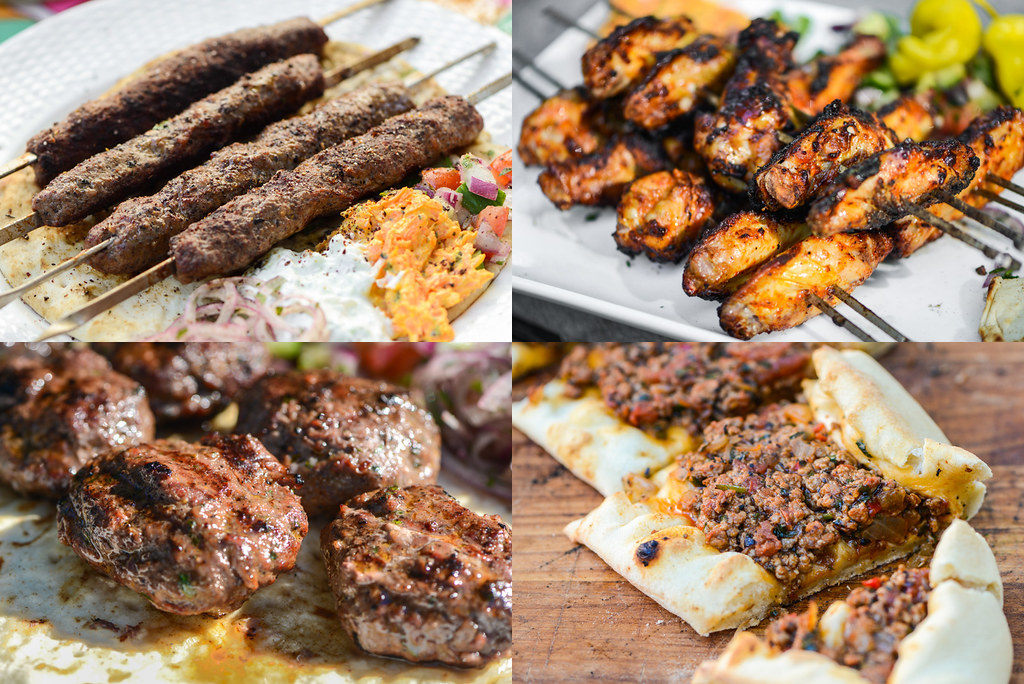 The long Meatwave draught is finally over! For those following the blog, you already know my wife and I decided to haul ass out of New York and down to North Carolina in the middle of this past summer, and with all the packing, unpacking, job searching, and general settling in, I had put the Meatwave on hold until I felt comfortable hosting it in our new home. In mid-Sept, I decided that time had come, but the weather gods felt the need bestow upon us epic rains for nearly two weeks that dampened my efforts to get this 11-year tradition back on track. So it took until October 18—three months after the last one—on a brisk fall day, for the Meatwave to jump back into action with an excellent assortment of Turkish-inspired meats among a host of awesome new friends. 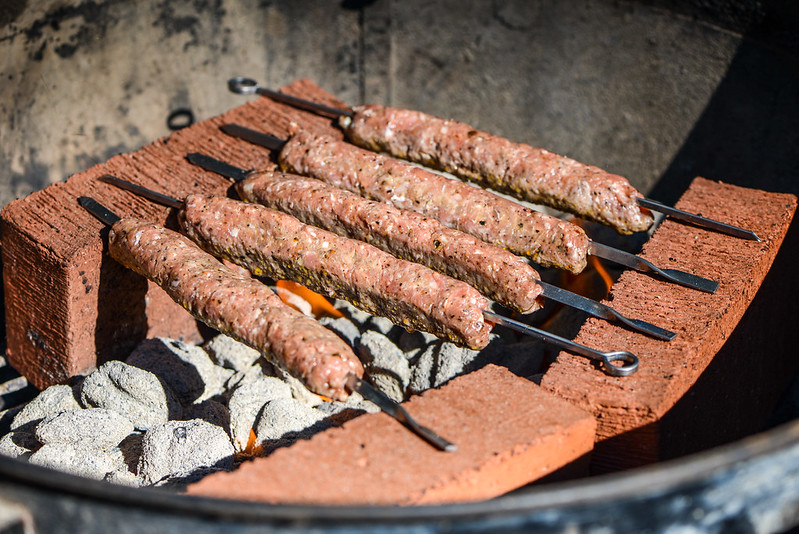 I had ambitions of a Turkish menu for the last Meatwave in New York, but a time crunch forced me to scale back that cookout to a simple burgers and hot dogs affair. So I was extra ready to get back to grill with new challenges, and I went all out for this feast.

From the outset, I only knew I wanted to make these adana kebabs—a recipe Kenji Lopez-Alt posted on Serious Eats after returning from a trip to Turkey. While the traditional spices required was part of the draw, what I really wanted to do with this recipe was attempt the grill my kebabs sans-grate, as they do in Turkey.

My aspirations were dashed though as the meat started to detach from the skewers during cooking, so I ended up needing to put the grate back in place to be able to grill them without fear of loosing any meat to the fire. 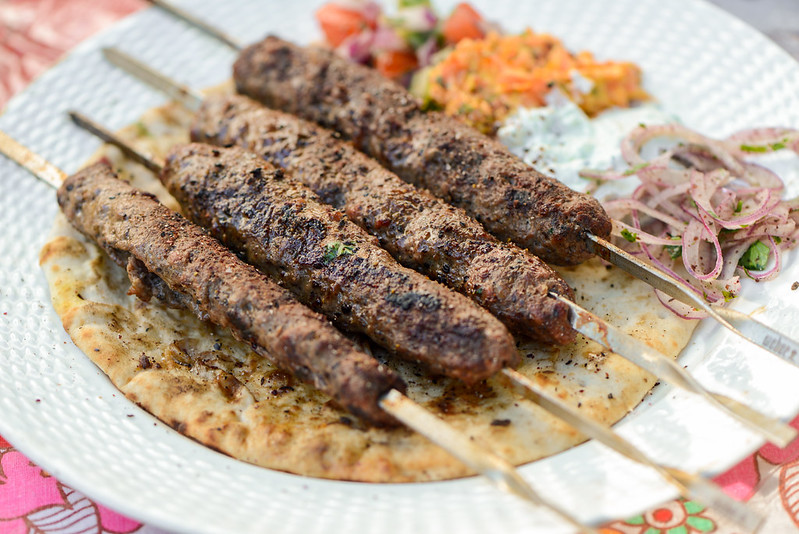 No matter how they were cooked, these were some pretty damn tasty skewers of meat. I ground lamb for the base and mixed in salt, cumin, sumac, and Urfa pepper flakes. It wasn't a lot of spices, but they were potent and gave the skewers a very unique flavor that included layers of earthiness with just a little heat and mellow lemon-y touch. 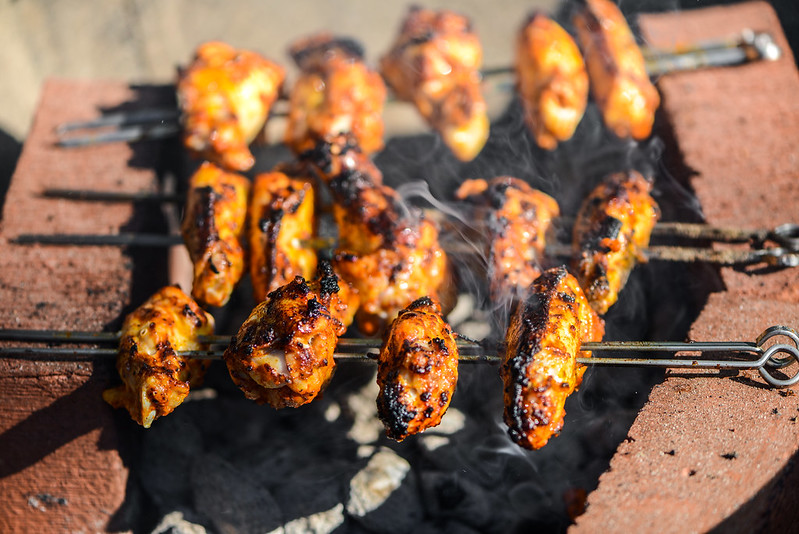 Where the adana kebabs failed in grilling without the grate, these kanat—Turkish spiced chicken wings—triumphed. While I'm used to roasting wings for a long time over indirect heat to get them crispy, these wings were done relatively quickly. They didn't grill up to have a universally crackling skin, but rather areas of char that delivered bits of crunch along with a great semi-hot pepper flavor. 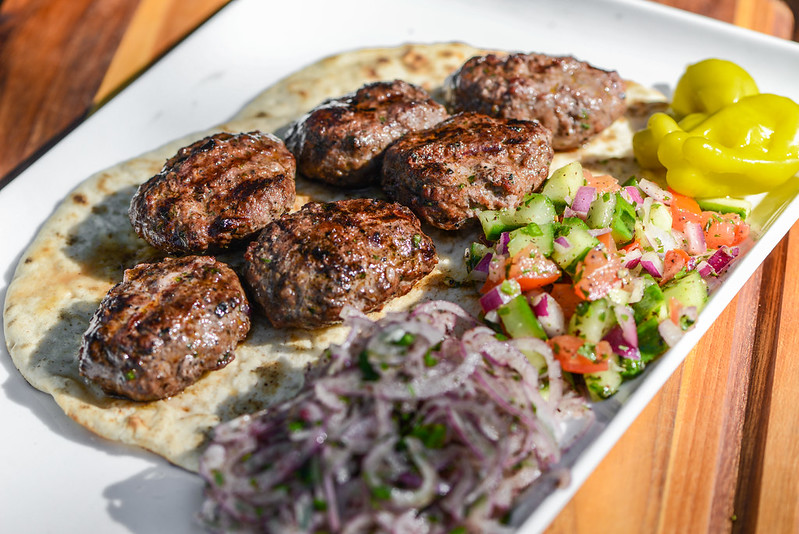 Since I already had all those special spices on hand for adana kebabs, I decided to use them to make another ground meat creation—kofte. Unlike adana, kofte are not skewered and can be spiced in a variety of different ways. I used ground beef chuck as the base and the same spice mixture of cumin, sumac, and Urfa pepper flakes, but also added red onion and parsley into the mix. The resulting meatball had its own distinct flavor that fit perfectly into the rest of the meal. 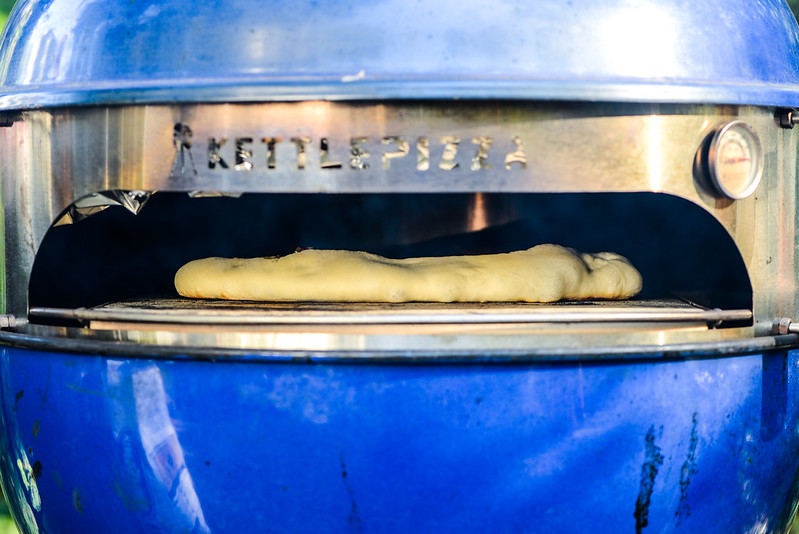 At a normal Meatwave, those three meats probably would have been enough for me to tackle in one day, but I was feeling ambitious, and also in need to feed a fair amount of vegetarians, so decided to try to make three varieties of Turkish pides too—plus it gave me an excuse to fire up the KettlePizza. 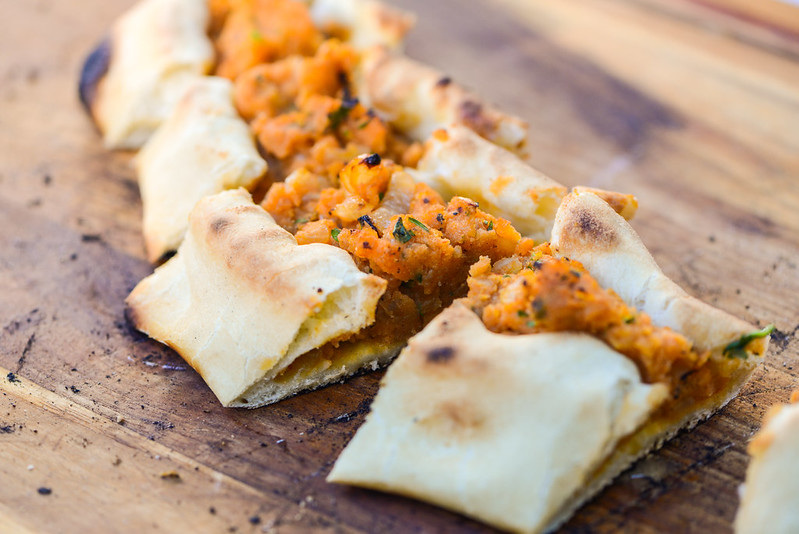 The first one I made was a patatesli (potato) pide. To make the filing, I mashed boiled potatoes with sautéed onions, hot red pepper paste, tomato paste, and spices to create a super flavorful mixture. I spread this out on rolled out pide dough, formed the dough into the typical boat-like shape, and then cooked the pide in the blazing hot pizza kettle, which resulted in my favorite of the three different pides. 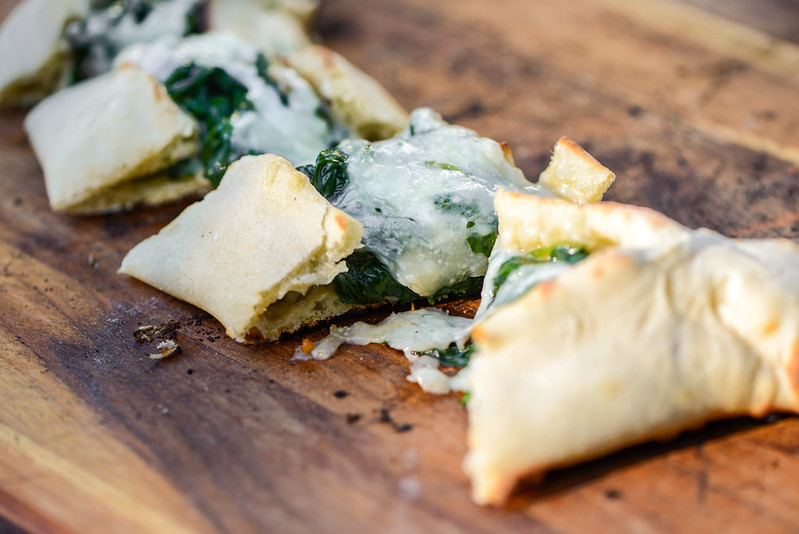 Next up was a spinach and cheese pide. The spinach was sautéed in butter until wilted along with red onion. Then I piled it into a pide dough with a generous sprinkling of salty kasseri cheese. It was great, simple fresh flavor combination that was a welcomed contrast to the rest of the more heavily spiced foods that I made that day. 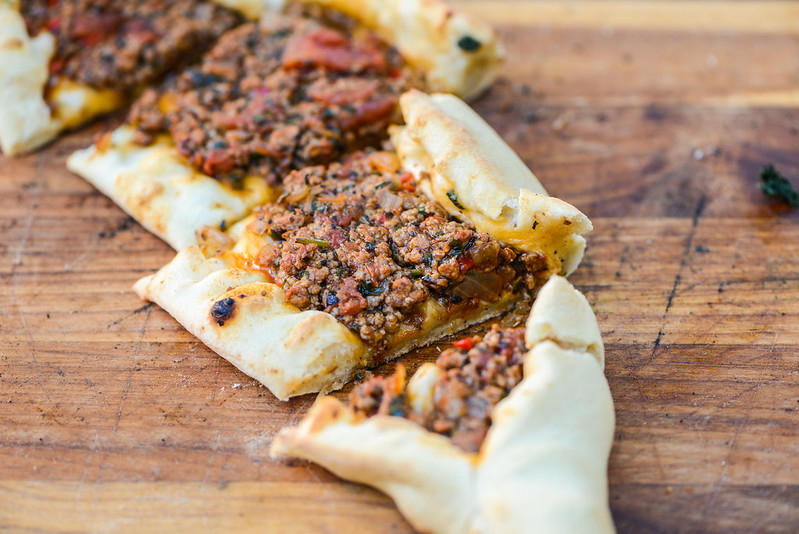 Finally, I used some leftover ground lamb to make this minced lamb pide. Seasoned in a similar fashion as the potato pide, the lamb created a completely different flavor profile. It had a great lamb-iness that was depended by pepper and tomato pastes, and then enhanced by a touch of mint. 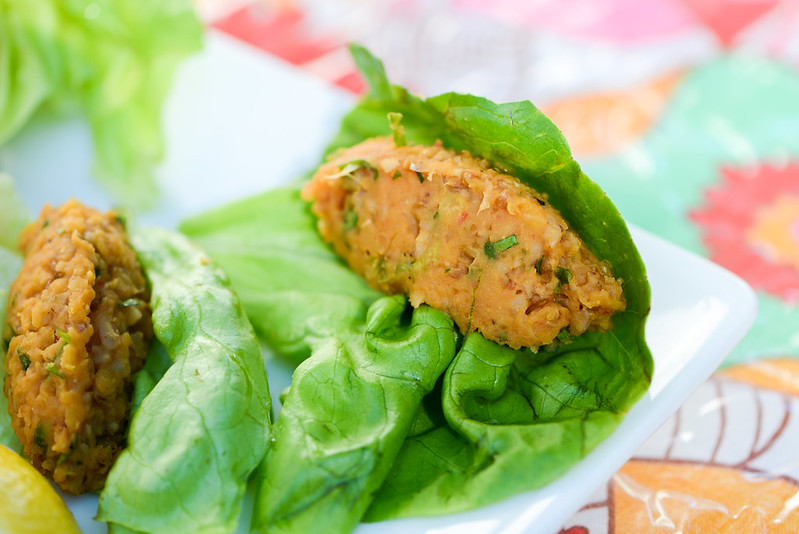 That was one large spread full of things that required me to be grill-side the entire Meatwave. Looking back, I probably should have done a menu that let me step away and socialize more, plus I was so busy I did a totally horrible job on photographing. So while I had many guest who brought many delicious things, I have very few photos to prove it.

Above is one of the few other foods I got a photo of—red lentil balls made by Kristin. We used to get these back in Astoria at a place called Mundo, where they were dubbed red sonjas. I don't think we ever went to Mundo without getting an order of Red Sonjas, so it seemed almost required to have them at our Turkish-themed Meatwave. 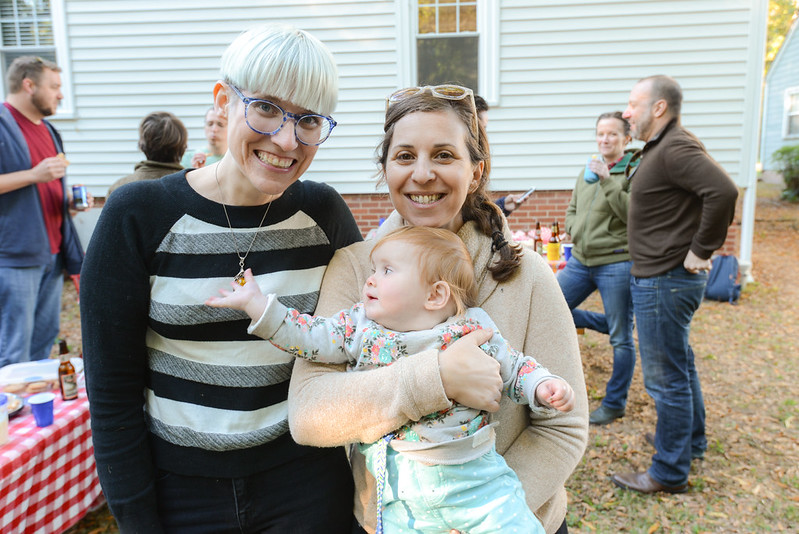 While I didn't get photos of more than half of the Meatwavers in attendance, I did capture these great people—Jenny, Leslie, and little Annabel. Jenny and her man Bryan are the reason we chose North Carolina as our new home, and it's been great living close to them. Leslie was one of the first people Jenny introduced us to, and we now regularly get together with her crew for happy hour almost every Wednesday. 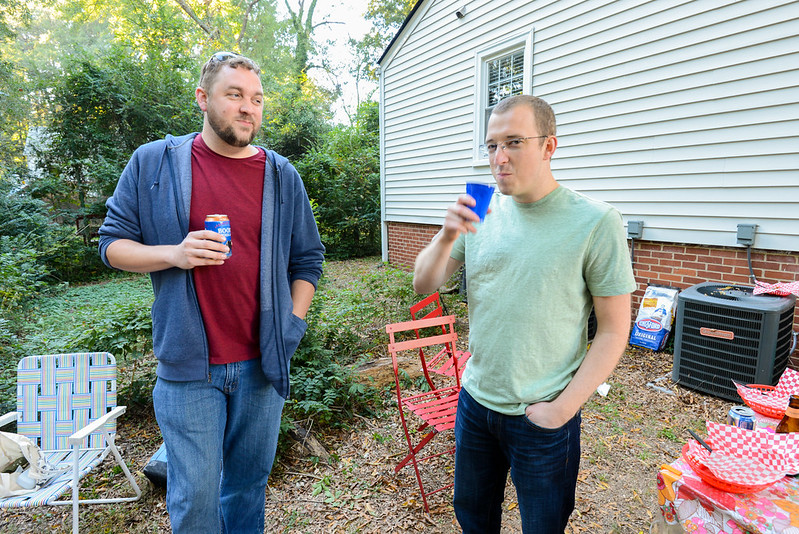 Now here's where I feel really bad. I'm horrible at remembering names in general, and being so focused on the grilling that day, I really can't remember everyone's name who came by (in my defense, it was also a lot of new people). So I apologize in advance for my forgetfulness, but we have here Josh and his buddy. Josh reached out after seeing that I had moved to the area, and I extended an invite to him to join us for the Meatwaves. This was a wise move because beyond the good extra company he brought, they came with a fine home-brewed sour and some incredible Vienna sausage-stuffed corn muffins with a chipotle honey butter. 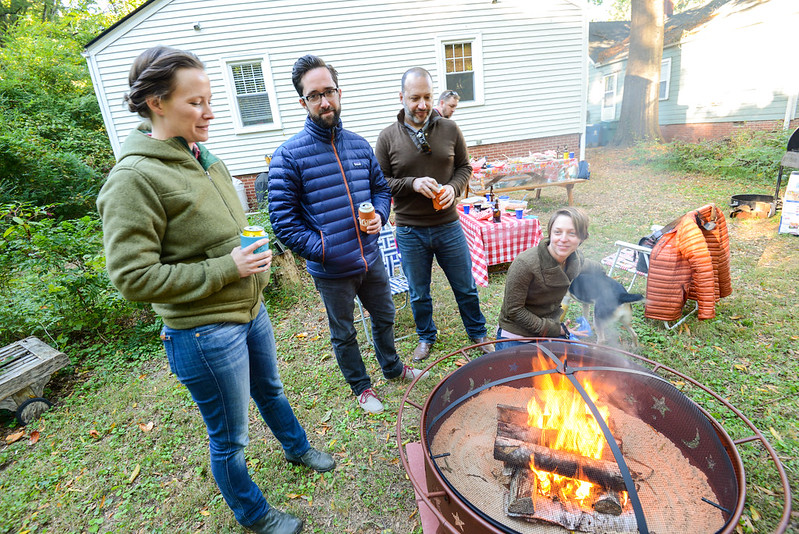 When I imagined my life in North Carolina, sitting around a fire in my backyard played prominently into those visions. So when I saw it was going to be chilly for the first Meatwave, I ordered myself a huge fire pit without delay and don't regret that impulse buy one bit. As the sun began to set and the temperature was dropping, Kristin got a cozy fire going and we all gathered around. Here we have Meredith, Matt, and Annemie (three out of four names isn't bad, is it?) huddled around the fire, helping to perfectly fulfill my idealizations of what life would be like for me in South.

As everyone parted when it grew darker, Kristin and I remained by the fire, drinking beers and enjoying our new home immensely. I feel lucky to already have meet such great people that I'm able to share my love of grilling with. Hopefully this excellent start to the Meatwave in Durham is just a snapshot of all the good times that are still to come.