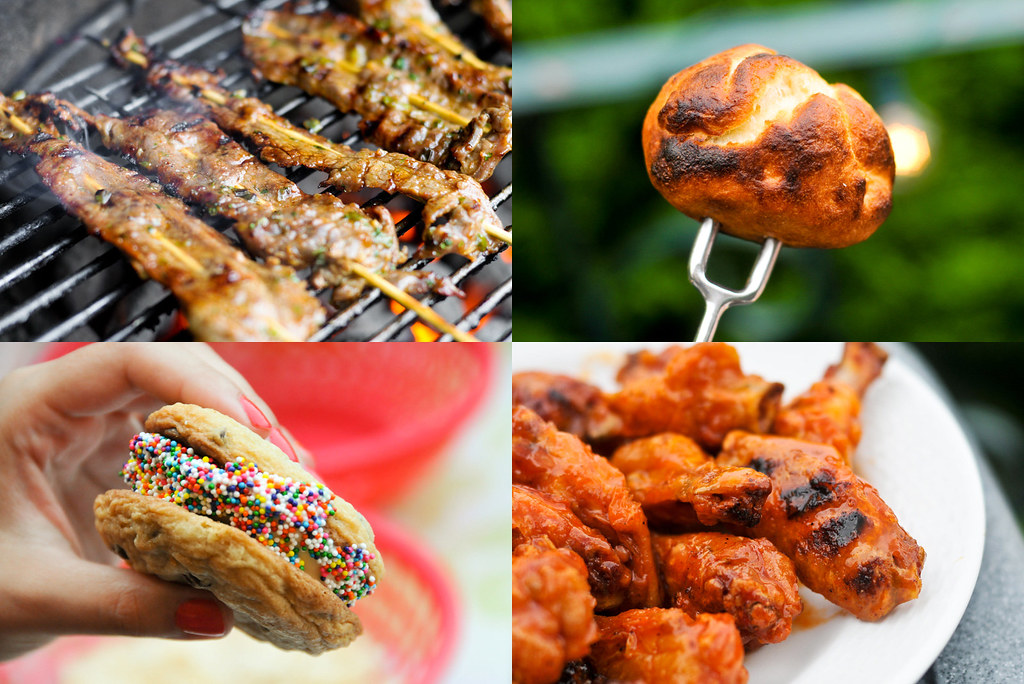 Whew, time has flown! It was only a year ago that I was wed in Holy Meatrimony, and our first Meativersary in already upon us. Sounds like a call for a party to me! Party down we did this past weekend, Meatwave style, with one wave of grilled party food after another in celebration of the union between of husband, wife, and meat. 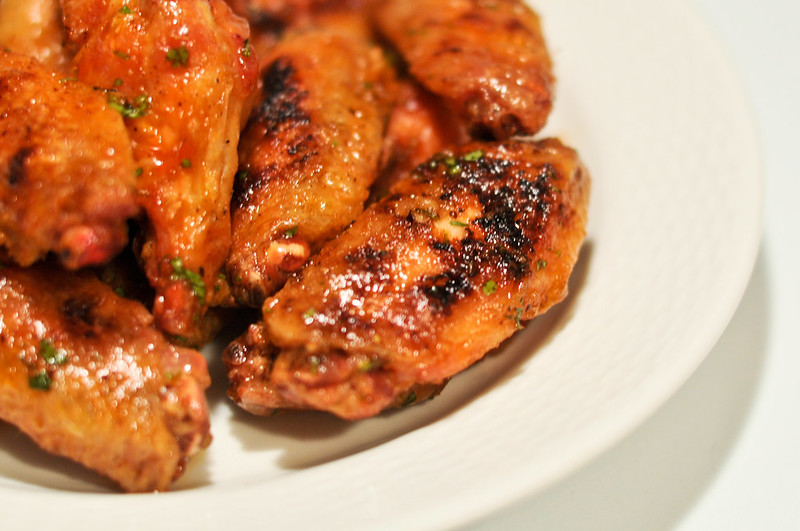 The day started off with the grilling of wings. Thanks to the brilliance of Serious Eats' J. Kenji Lopez-Alt, my grilled wings have taken a step up from pretty freaking good to near perfection. The trick he uncovered was to coat the wings with baking powder and give them a nice rest before taken to the heat. On the grill, this produced an extra crisp and textured skin that held the sauce in all the little nooks and crannies. The first batch of wings were of an Asian variety, using a mixture of soy sauce, honey, hot sauce, sherry, vinegar, ginger and cilantro as the coating. 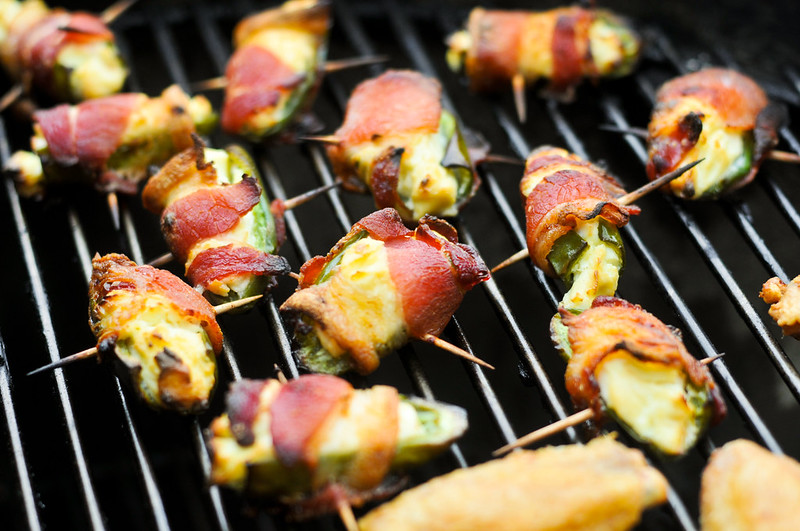 Grilled up side-by-side with first batch of wings were these jalapeno poppers. These chilies stuffed with cream cheese and wrapped in bacon have become a must at my parties. Every time I make them, I forget how simple and just how delicious they are, which is probably a good thing, otherwise I'd be eating them way too often. 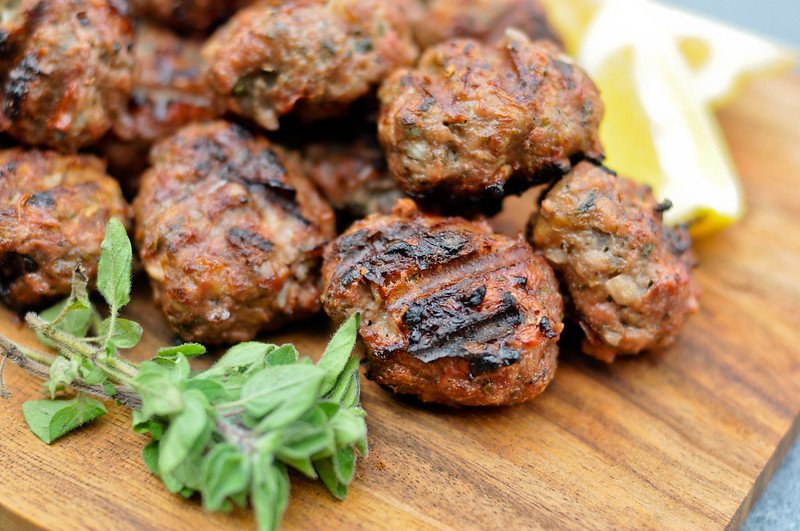 After an outstanding success Joe exhibited with Italian style meatballs at the Meat-a-thon, I had to show him up try my hand at it as well. I opted for a Greek style, Keftedes for those in the know. Freshly ground beef was mixed with a crap load of oregano, onions, and mint using white bread and eggs as a binder. A tad too soft for the grill, it was a delicate procedure of cooking them without withstanding breakage, but all was good in the end. Served with tzatziki as a dipping sauce, I marveled at how much these matched the flavor of those I'm used to at some of the best Astoria joints. 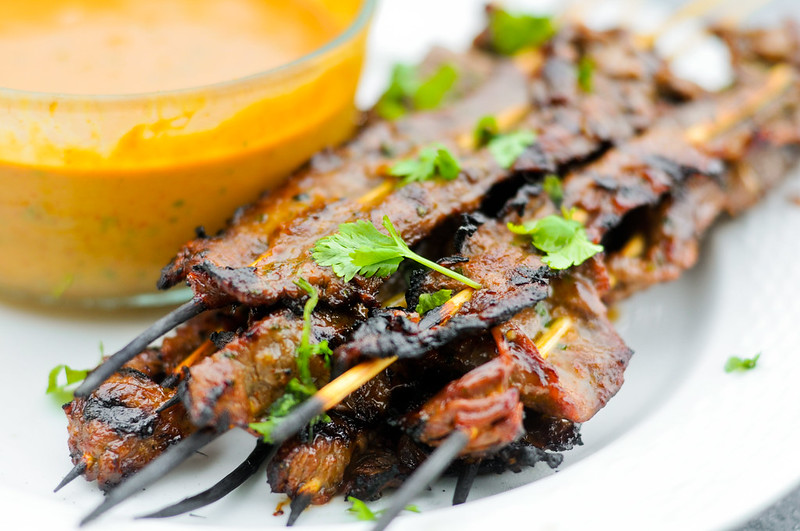 While at the butcher, I spotted a nice looking piece of flank steak and couldn't resist buying it up. My original plan was to make a Meatwave favorite, Asian beef skewers, but took a slight diversion after coming across an appealing recipe for beef satay. I never thought to make satay before, mainly because I'm not the biggest fan of peanut sauces, and what's satay without that? The spicy peanut dipping sauce that accompanied these has totally changed my tune though. It paired so well with the flavored beef whose marinade added just the right touch of Thai flavor to some superb steak. 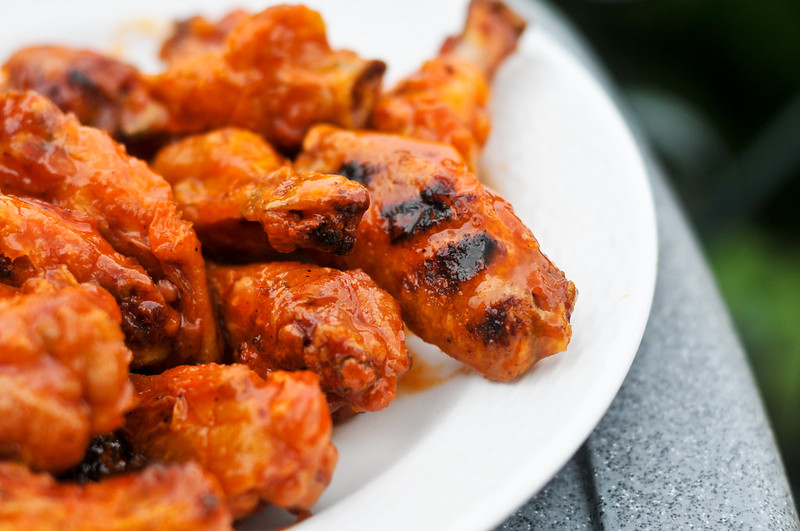 You can't make wings without Buffalo sauce—it's impossible, I dare you to try. So it went, my Asian wings ended up going against some Buffalo, sparking a never ending debate among the ranks over which was superior. I take up sides with the Buffalo, but the fine lady on the other end of this Meativersary might have my head over that. 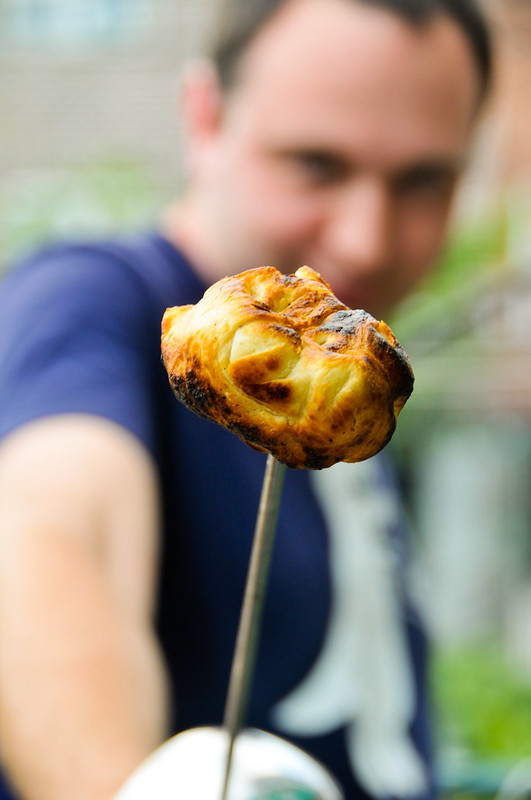 Last on my prolific list of party meats were these Meatwads. I've kept some of you guessing as to exactly what they are, and I'm going to keep you at it just a little bit longer, mwahaha. (Although now you have these photos for further clues.) All I'll tell you is that everyone loved making and eating them. 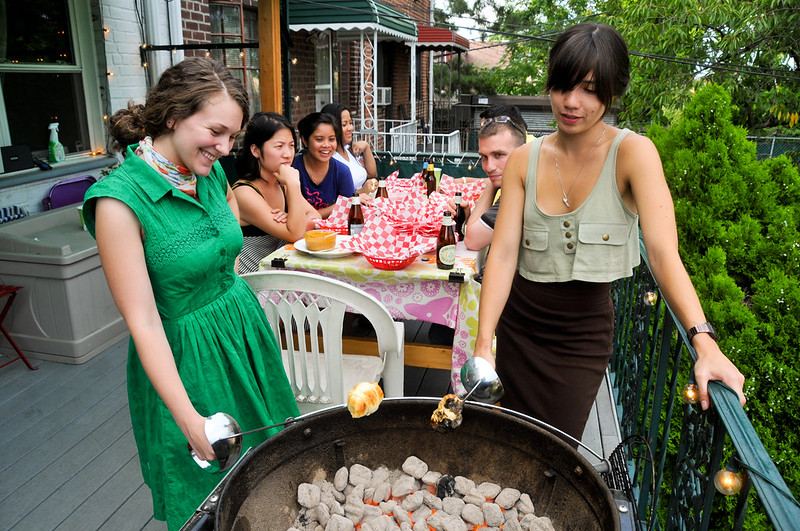 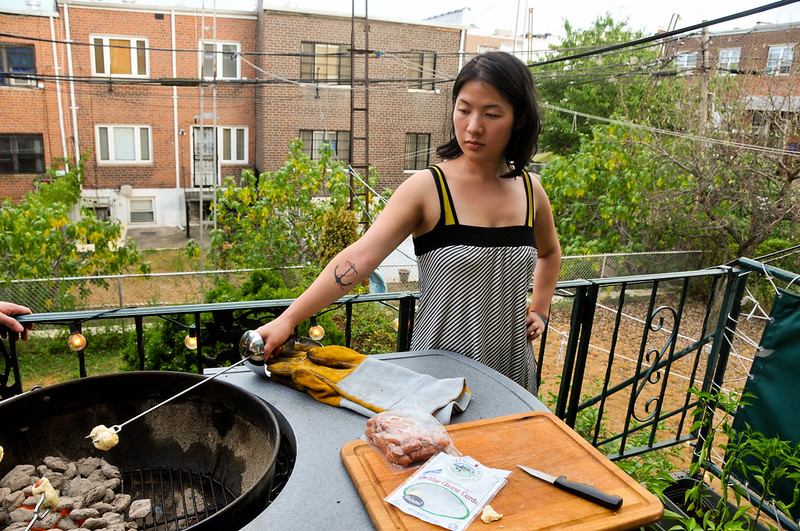 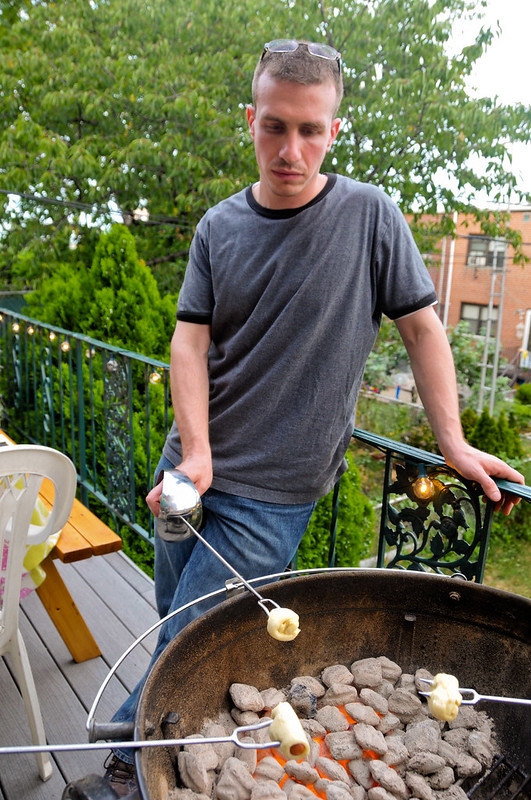 Peter loved meatwadding (even if his wads were light on the meat)! 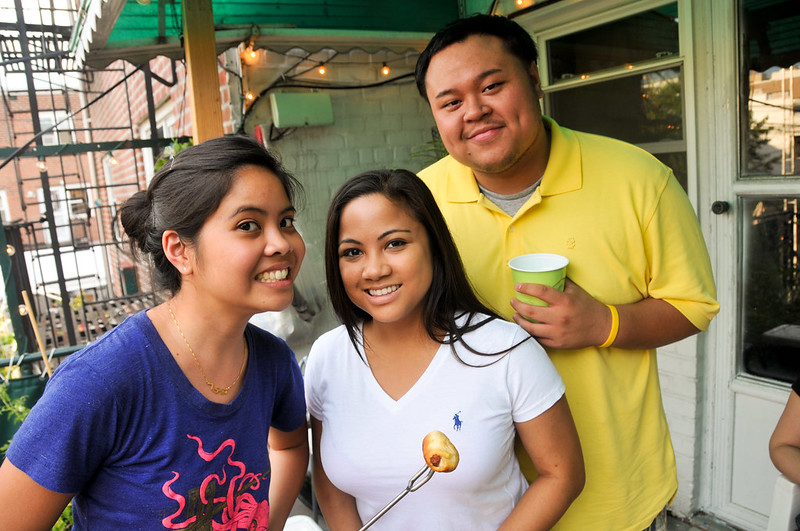 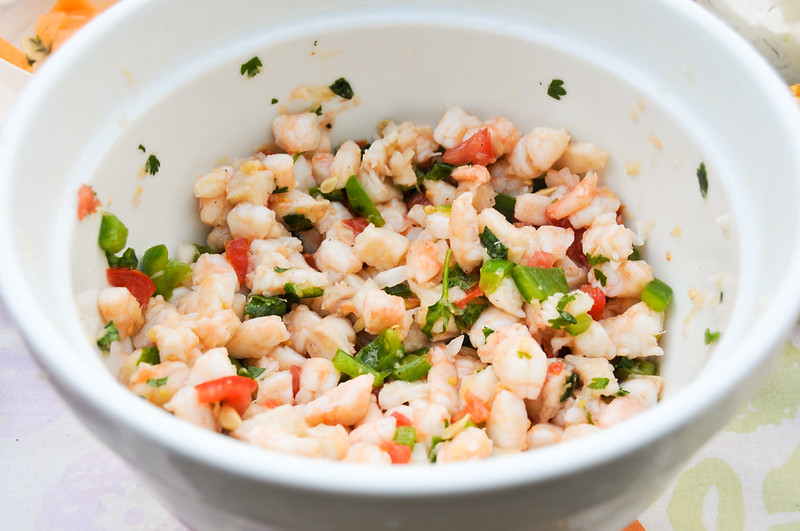 Ok, enough with the meatwads, onto something completely different, a "meat" that rarely sees the light of day around these parts, fish. Now I have been trying to break myself from a horrible seafood aversion, but my efforts are falling short. So I'll have to take the word of my meaty minions, and the nearly empty bowl at the end, that this ceviche of shrimp and tilapia that Brandon contacted was top notch. 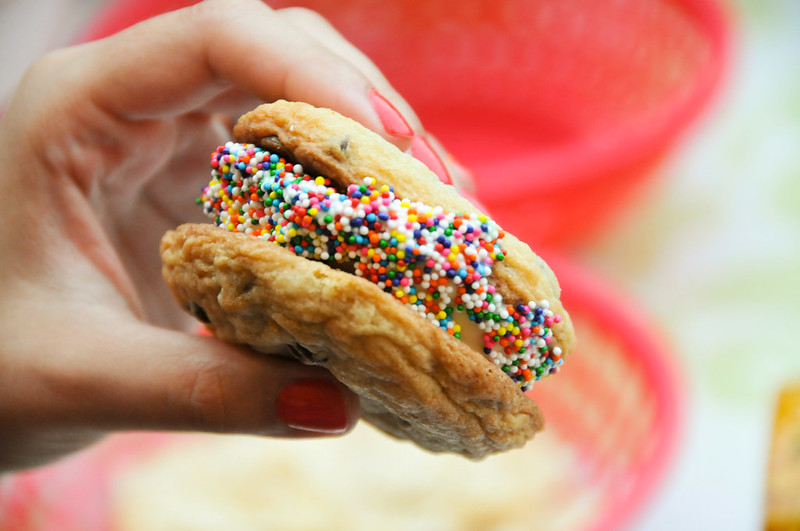 After all that, it could have been hard to make room for dessert, but not when dessert was homemade ice cream sandwiches by Lindsay. Armed with a shiny new Kitchen Aid, Lindsay is prepared to conquer the baking world, and judging from these babies, she's in it to win it. 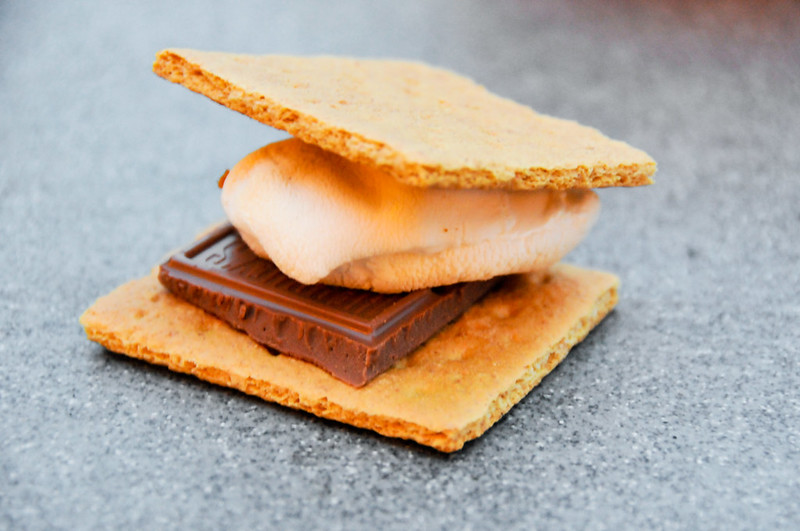 Marissa came with one of her favorites to grill, giant jet-puffed marshmallows. Skip the chocolate and graham crackers, all she's interested in is gooey balls of sugar. I, on the hand, prefer my toasted mallows with the appropriate s'more accompaniments, which I got thanks to Treyci and Tito. 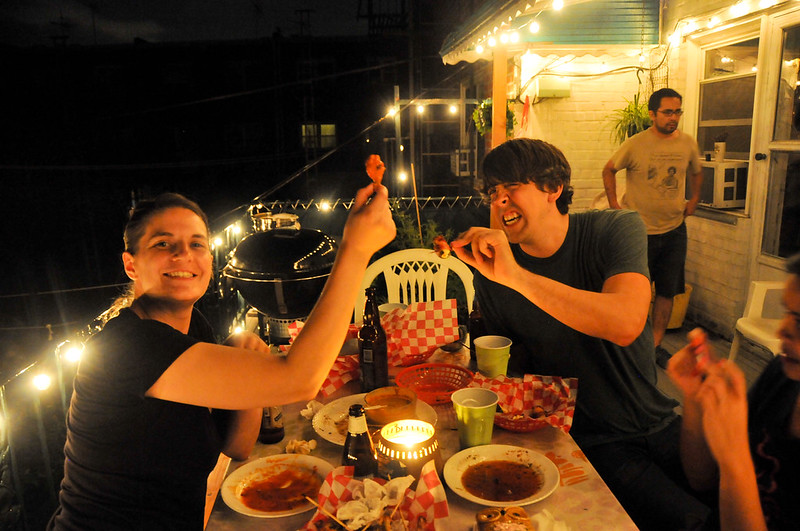 It was a late night with our second Saturday Meatwave in a row. As the evening was coming to an end, a couple wings and jalapenos still remained. Beyond stuffed, no one wanted to touch them, until Lindsay challenged Joe to a collective finishing of the meat. With a meaty cheers, the last morsels went down, and the Meativersary came to a delicious close.