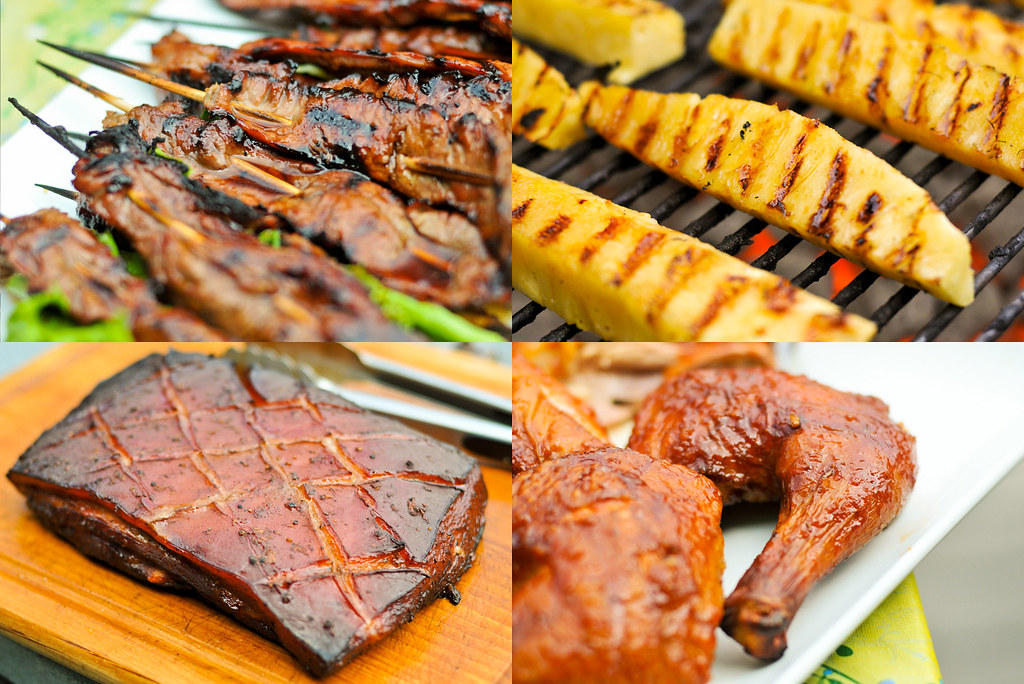 With so many Meatwaves under my belt, you'd think there isn't that much uncharted territory, but inspiration is limitless and we're constantly mixing up Meatwave classics and brand new spreads, and Total Meatclipse of the Heart delivered on the new in a big way. Taking a tropical spin on things, this weekend we grilled up a Hawaiian-inspired feast covering three different animals, a lot of sweets, and more pineapple juice than I've ever seen used before. 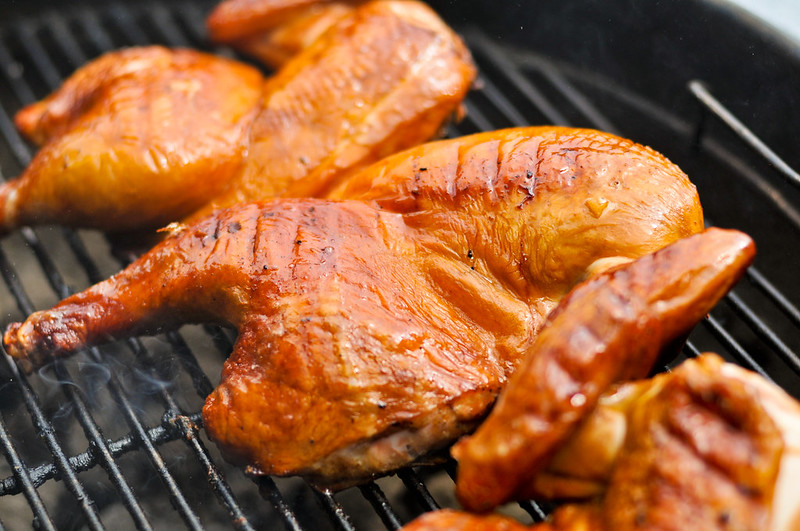 It all started with this chicken. I received a free sample of Cook's Country a while back, which had a recipe for Huli Huli chicken—a Hawaiian smoked chicken finished with a pineapple-based glaze. I've had it in the reserves as something I really wanted to try, finally deciding this would be the weekend and ended up building the the rest of the menu around the desire to grill this chicken. The Hawaiians sure know what's up with chicken, as this was smoky, juicy, fruity, sweet, and tangy, coming together to make a really stellar bird. 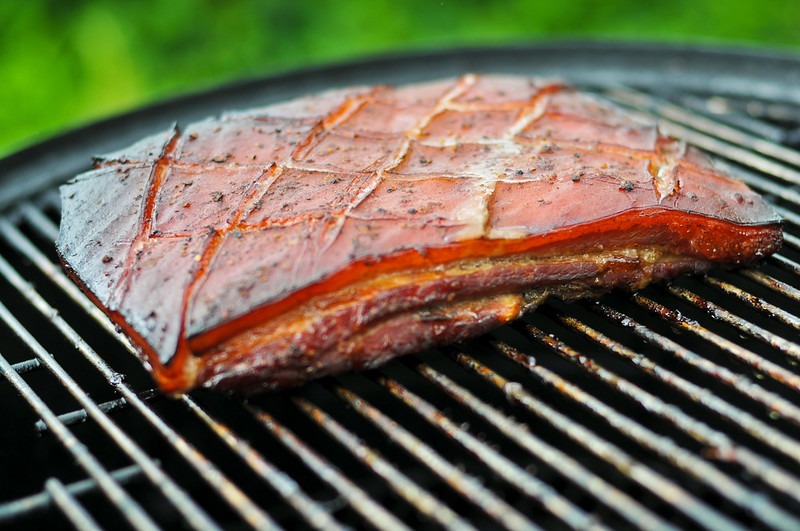 From there, I was thinking a whole pig roast, but that seemed a little unattainable with just a week of planning time, so went for the belly instead. This was the first pork belly I ever made, and chose to marinate it in a char siu sauce mixed with pineapple juice, then smoked it over apple wood, and finished it by crisping the skin on the grill. For a first attempt, this was pretty killer stuff, but then again, how can something with about 50% fat not be the best thing on earth? 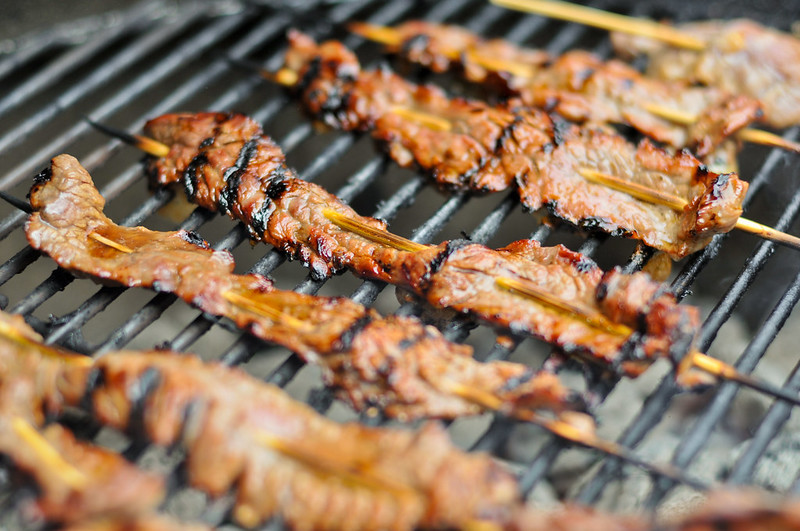 In my continually fear of not having enough meat, I added teriyaki beef skewers late in the game (then added an extra 1 1/2lbs of it the night before). For this, thinly sliced flank steak was marinated in teriyaki/pineapple juice mixture, then skewered and grilled over high heat. A final brush of sauce made these irresistible, as the entire 3lbs were gone by the end of the night. 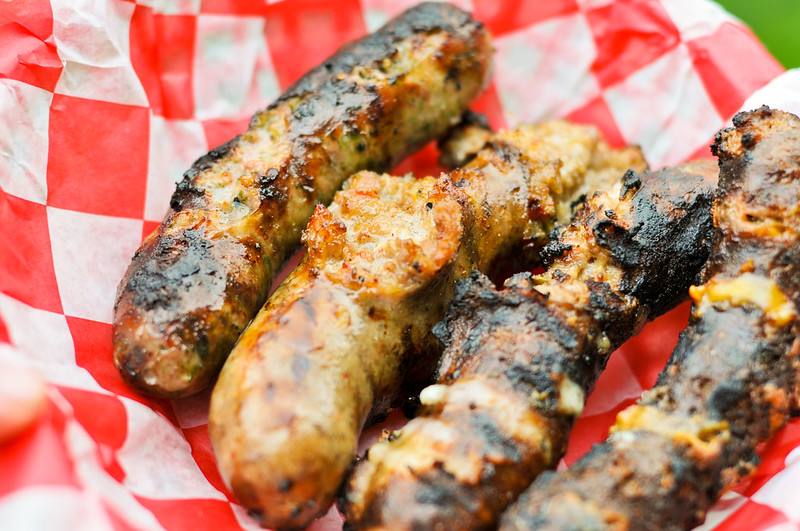 Suzun and Michael added to the meatiness with four excellent sausages from the Meat Hook. While they exploded over a fire that was a bit too hot, they still tasted awesome. I partook in the cilantro sausage, which MFS called "a triumph of the Meatwave," until he found out that I didn't actually make it. 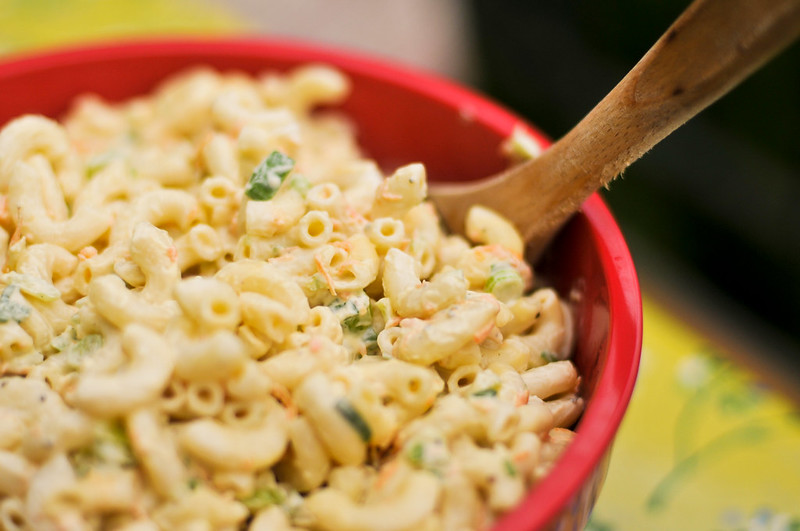 With Hawaiian meats there must be some Hawaiian sides. I wanted both rice and a macaroni salad for the full plate lunch experience, but my wife talked me out of rice (it would have been too much food) and I focused on the salad only. I used the recipe that was inset into the one for Huli Huli chicken, which turned out a mighty fine macaroni salad that had a cool, creamy tang and good contrast between soft and crunchy. 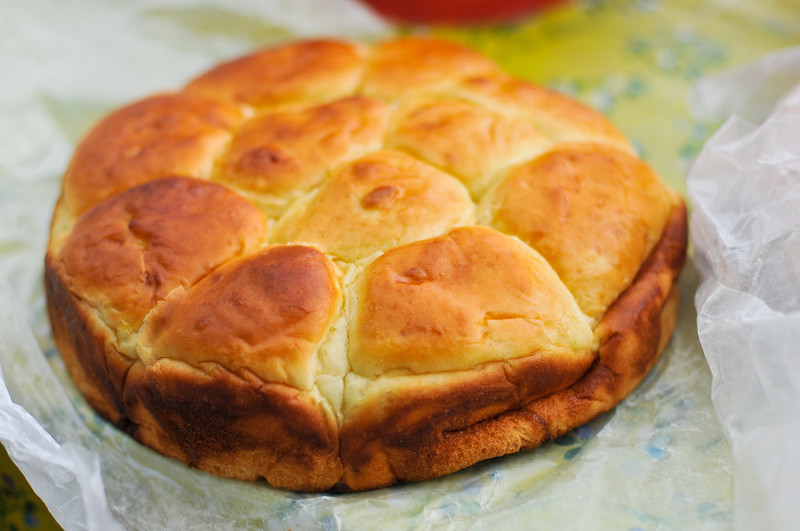 Lindsay provided the Hawaiian bread. Becoming ever more skillful in her craft, she made an excellent sweet bread that had a light texture with a good chew that complimented everything else that was on our plates. 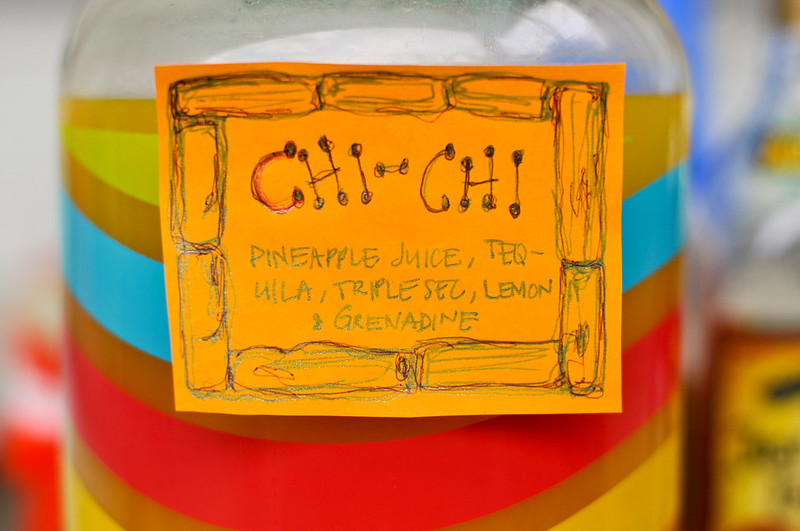 The Meatwave is becoming ever more conscious of our drinks. While keeping myself busy with the meats, the wife mixed up this fitting mixture of pineapple juice, tequila, triple sec, lemon and grenadine called Chi Chi. Along with that, Karla and Craig had some killer mojitos, and Suzun made pina colada. 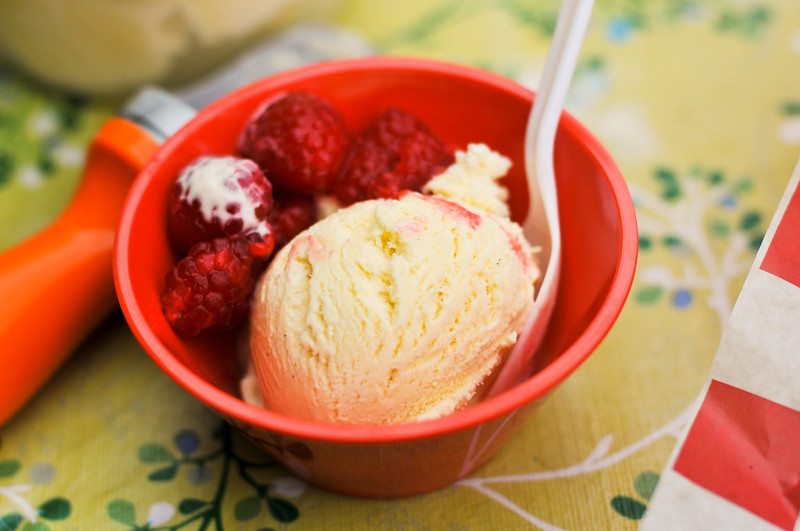 Lindsay also brought this stellar coconut ice cream which served as an interlude between meat courses. I believe it was a first attempt at ice cream making and she's already kicking my ass with a flavor and texture that was spot on. 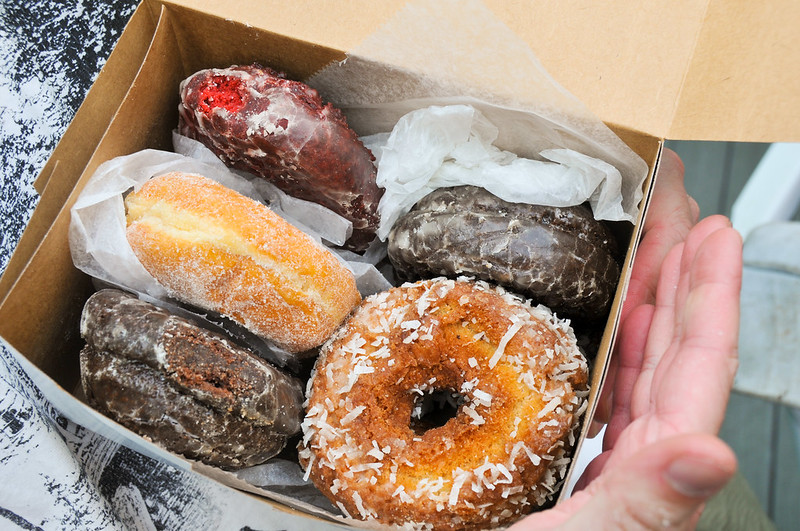 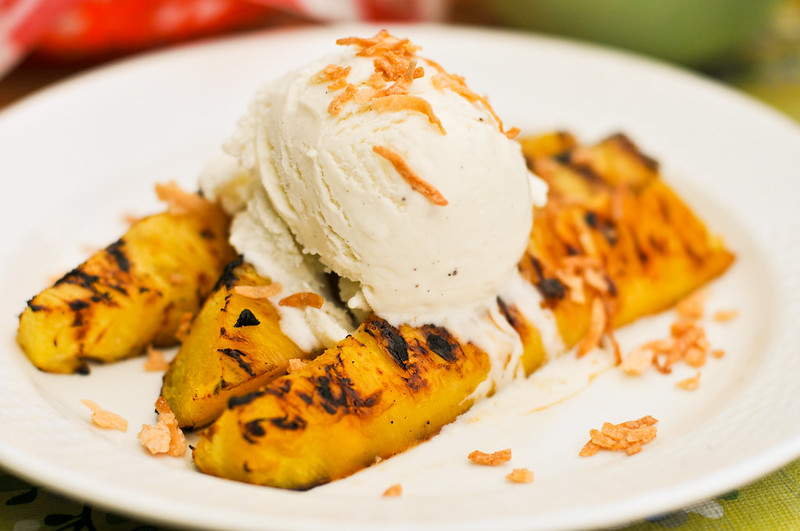 Last but not least, more pineapple! This pineapple was brushed with a rum glaze, grilled, and finished with vanilla ice cream and toasted coconut. It provided a sweet end to a long day of eating that brought new, excellent flavors to the Meatwave. All that was missing were grass skirts and coconut bras! 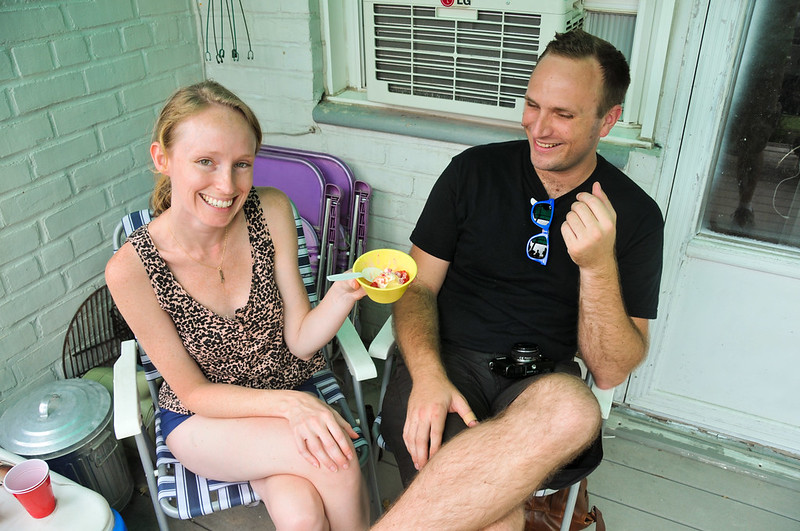 After Marissa mentioned "5lbs of pork belly" to Karla and Craig, they were all over this Meatwave. Good thing to, because their mojitos were excellent and without them, the boozy factor would have been way too low. 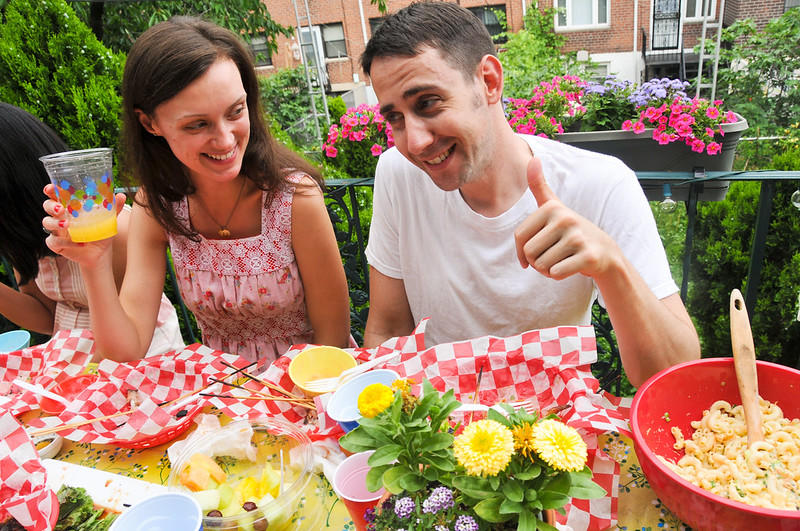 Suzun brought Michael to his first real Meatwave. They were at the BBQ Block Party, and that's a hard act to follow, but I think they both left impressed and throughly full of meaty goodness. 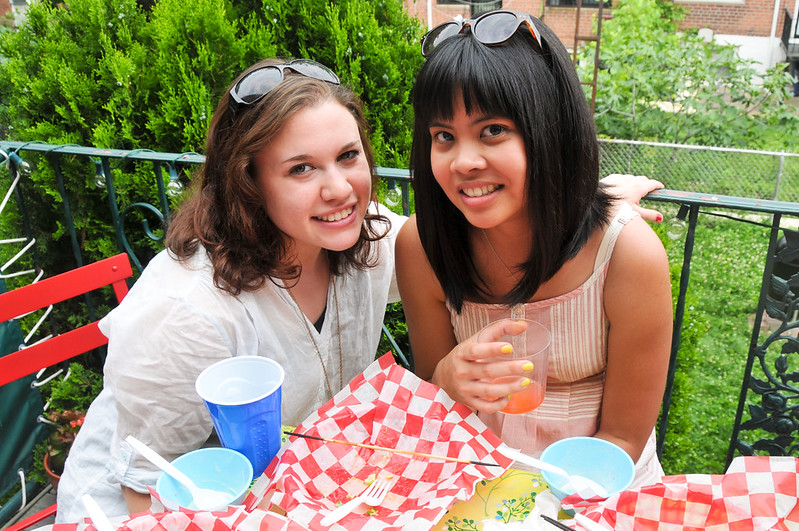 My sister made it out to her first Meatwave of the season as well, providing the important ice cream for the grilled pineapple finale. 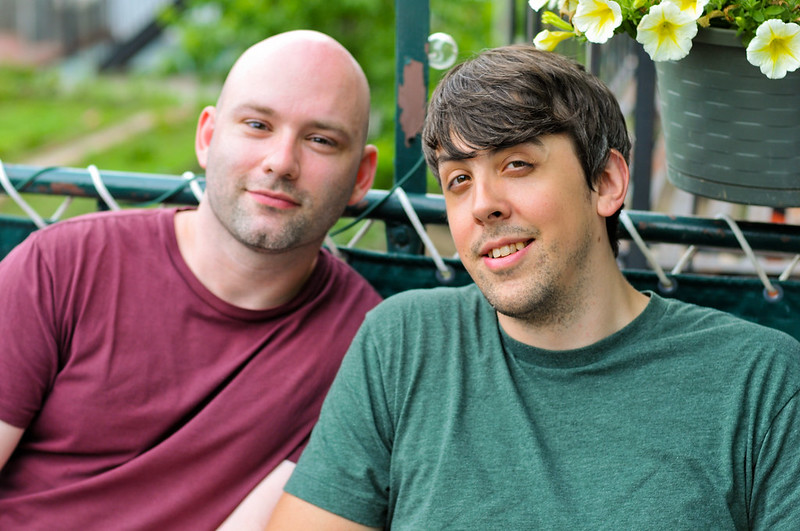 The other Josh (seen here with Joe), now officially "Bad Josh," and his wife Silvina only added to the drunkenness of the affair with dark and stormies—ginger beer and rum. It's been a while since they made it out, so it was great to have them back in the good hands of the Meatwave. 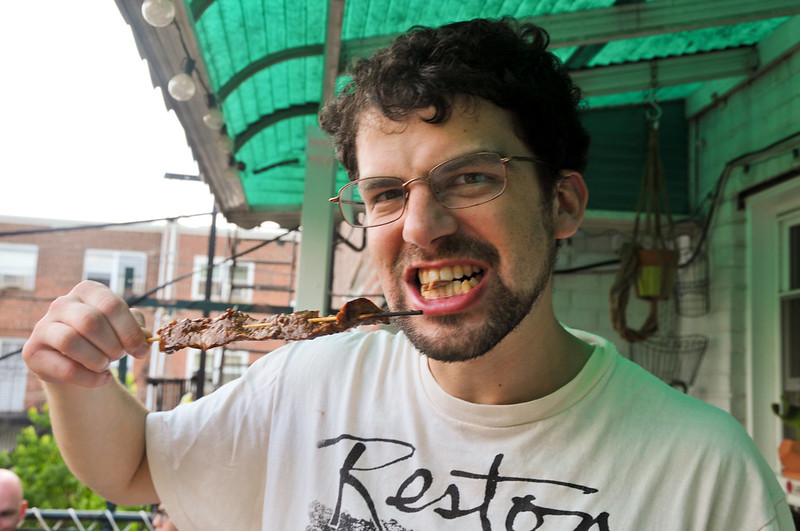 A beef skewer is no match for a man who just dealt with the NYC budget. With the ferocity of a lion attacking its prey, Mike dealt a blow to that stick of meat, releasing all the pent up aggression that local government is sure to instill. 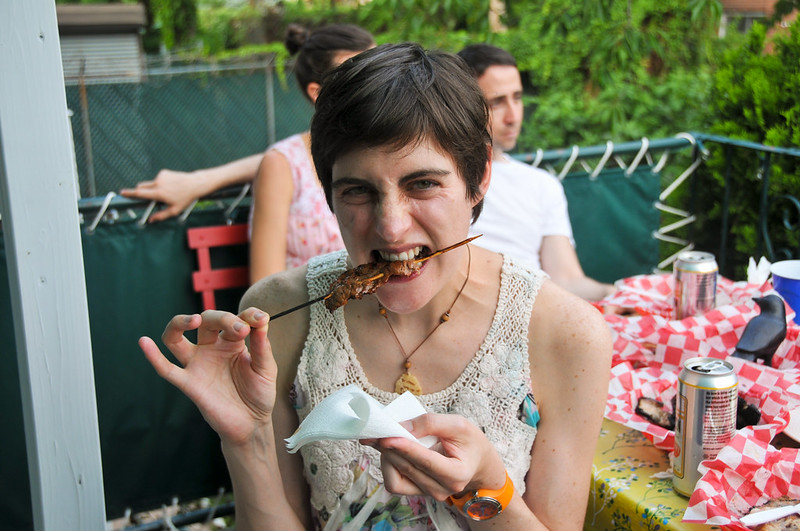 Mike's passion was contagious as Jennifer took the same approach to her beef, saying what we all collectively were thinking, "the meat is ours and it's f'in awesome."