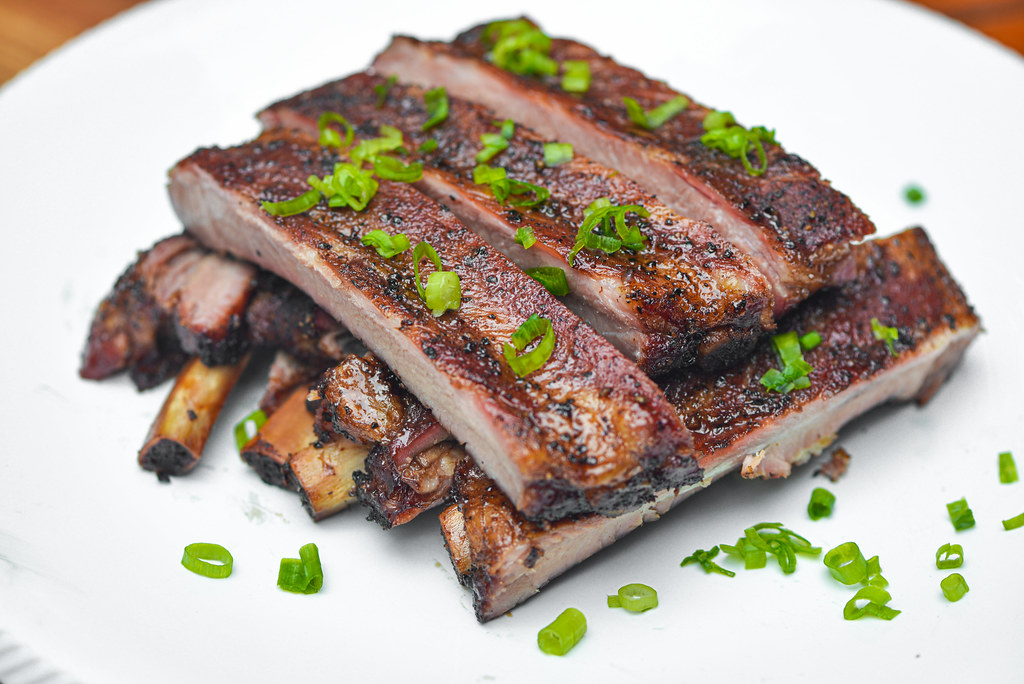 When crafting a menu of Filipino-inspired dishes to introduce my NC friends to this cuisine, there was little doubt that adobo needed to be included. I would bet that for many, like it was for myself, adobo is the gateway into Filipino food—it's ubiquitous and easy to come by, familiar enough to make it a comfortable first choice in what can be an otherwise unfamiliar menu, incredibly delicious, and the perfect introduction to the tangy and savory qualities that form the backbone of so much of the cuisine. The only problem was adobo—most commonly a meat braised in a vinegar and soy sauce mixture—is not an easy thing to adapt to grilling or smoking. After racking my brain with a few ideas of how to do it, I finally settled on trying out an unorthodox adobo technique on ribs, and the results were incredible! 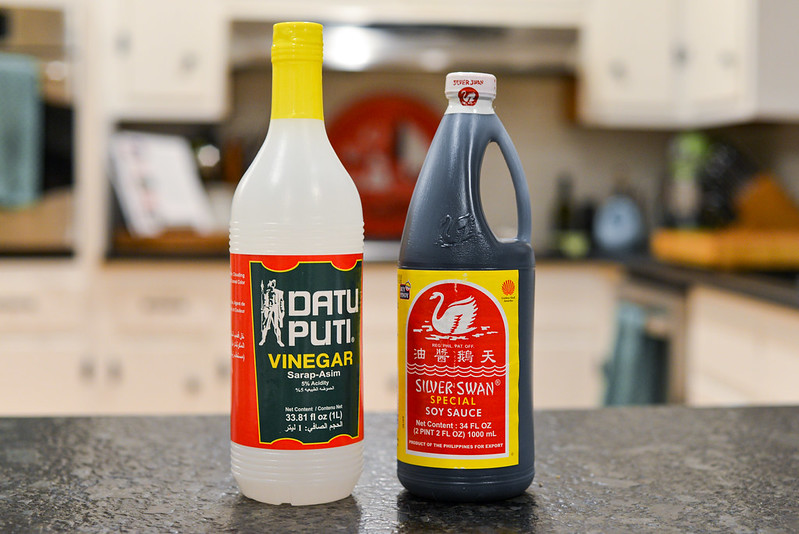 Vinegar and soy sauce are the two primary flavorings in adobo, and if you want it to taste as truly Filipino as possible, you'll want to seek out sugarcane vinegar and Filipino soy sauce. Luckily, both are pretty common at most Asian supermarkets, and even though there is only a very small Filipino population where I live, the grocery just a couple miles from house is flush with the brands I see most often at my in-laws houses. 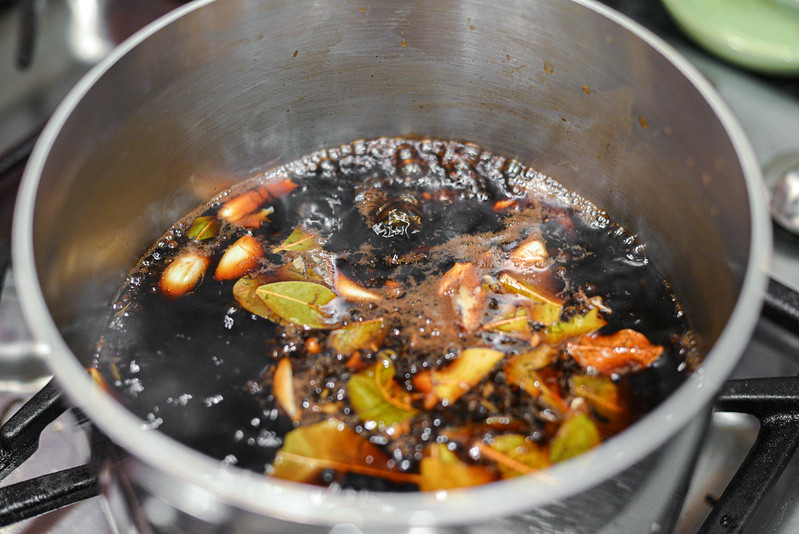 Now a normal adobo recipe calls for simmering meat in a braise comprised of vinegar, soy sauce, garlic, black pepper, sugar, and bay leaves. Since I was going to be going a different route with the method for this ribs recipe, I needed to first get all those braise ingredients infused together prior to actually cooking the meat. So I combined everything in a small pot and let it simmer for about ten minutes before removing the braise from the heat, allowing it to cool, and then straining out the solids. 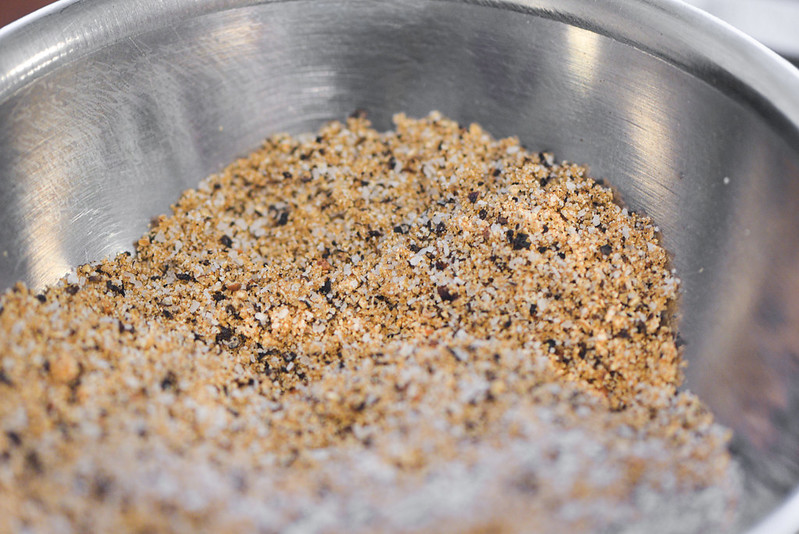 That's usually the extent of the seasoning for adobo, but since this was a non-traditional recipe, I decided to take things a step further and use a rub on the ribs. I did keep the rub simple and confined to ingredients that would just enhance the flavor, which led me to making it a mixture of dark brown sugar, pepper, salt, and garlic powder. 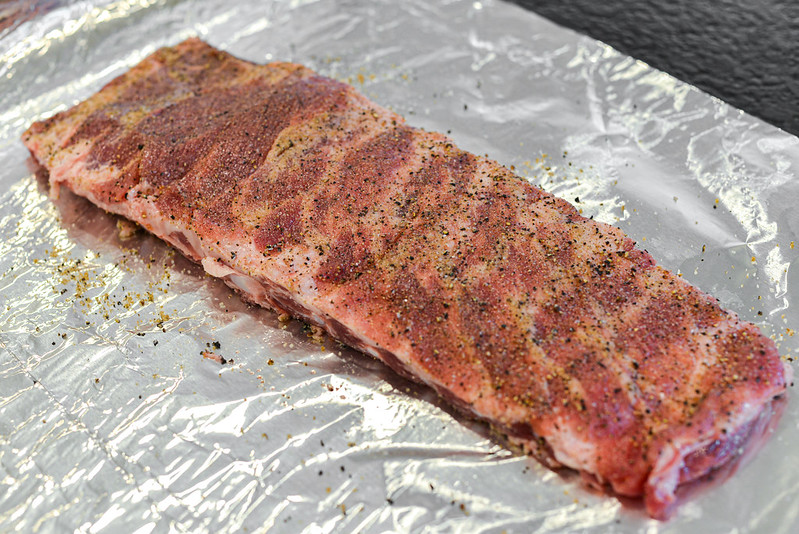 Since this rub was designed to only give the ribs a bit of a boost, and not be the primary seasoning, I only applied a light coating of it on my two racks of St. Louis cut spares, which was way less than I would have used if I were doing a normal barbecue recipe. 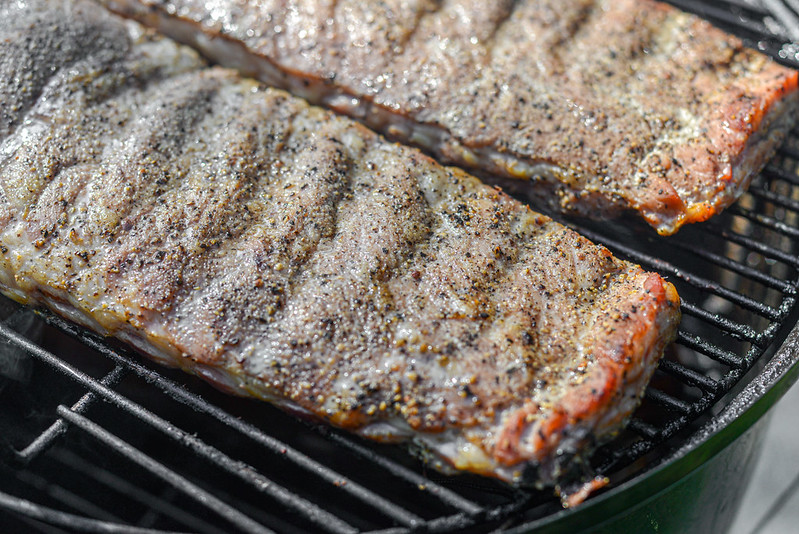 My goal for the final flavor of the ribs was to impart both some smokiness, along with the savory tang of adobo, which guided me to a multi-step cooking process. I started the ribs off in a smoker running at 225°F with a few chunks of pecan thrown on the fire. Smoke adsorption happens primarily during the earlier stages of cooking, so I let the ribs smoke for two hours before moving on. 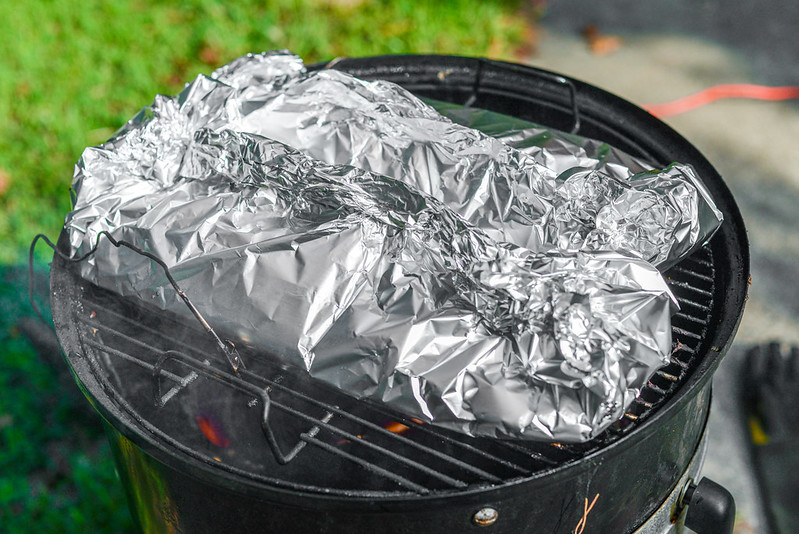 The next step was to braise the ribs. To do that, I wrapped each rack in heavy duty foil and left one end of the foil open, where I poured in half the braise into each packet. I then sealed the foil completely and placed the ribs back in the smoker, covered, and let them cook for another two hours. My hope was that this would be enough time and liquid to make the ribs sufficiently tangy like a normal adobo. 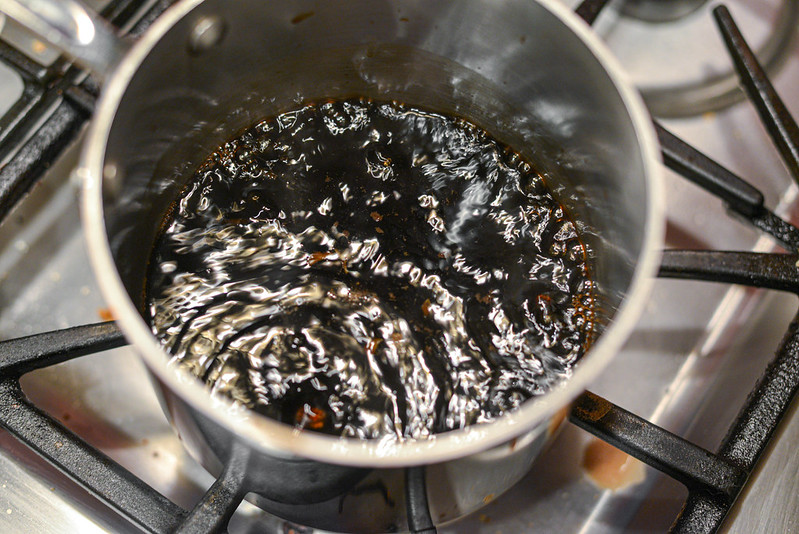 After those two hours, I poured out the braise into a small pan, unwrapped the ribs, and covered the smoker to let them continue to cook. I then went inside and put the braise over medium heat, added in some dark brown sugar, and then let the liquid simmer until it thickened into a glaze. I figured this glaze would only give the ribs a deeper adobo flavor and it also felt right to finish the ribs with a shiny slather. 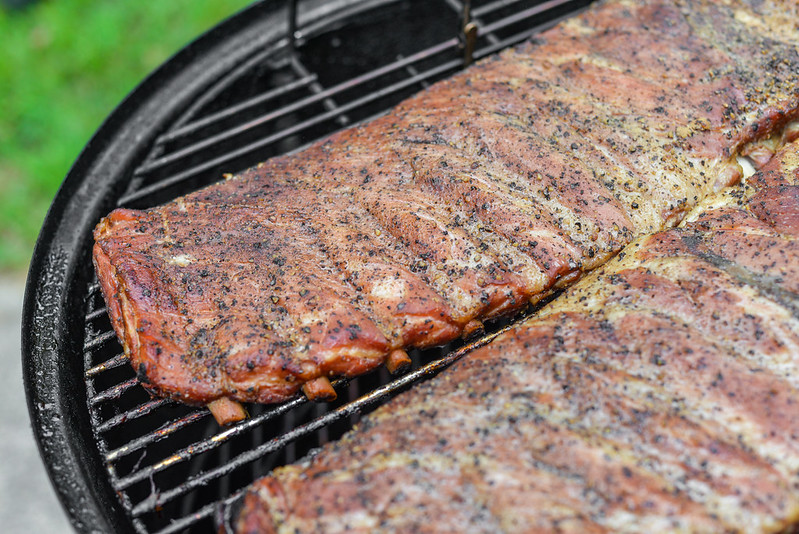 During the entire cooking process so far, the ribs remained fairly gray and unappetizing looking, which is very different from when I coat racks in a heavy red-orange spice mixture and they turn a beautiful mahogany color. Luckily, in that last hour of smoking unwrapped, the racks picked up a healthy orange hue to finally make them start to look mouthwatering. 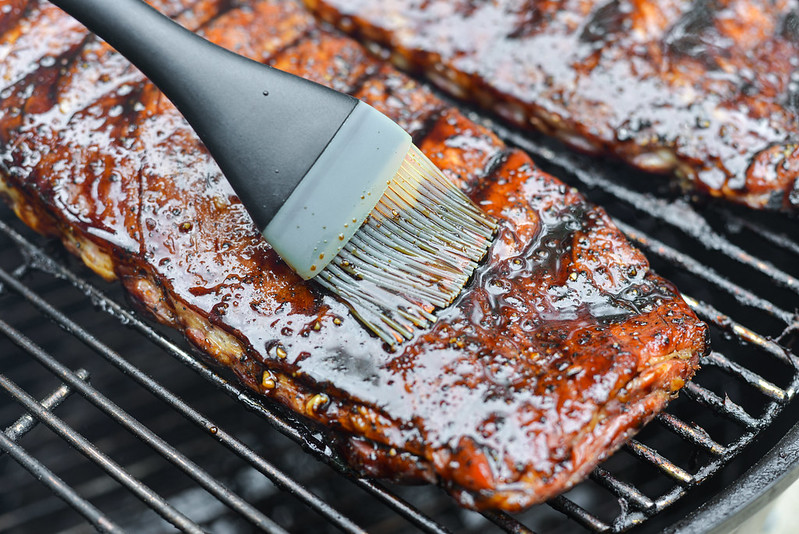 The application of the glaze just pushed things along even further, adding a darker, glossy coating that really had me excited to try them as soon as possible. After slathering on the sauce, I did let the ribs cook another 15 minutes though to give the glaze time to bake down. 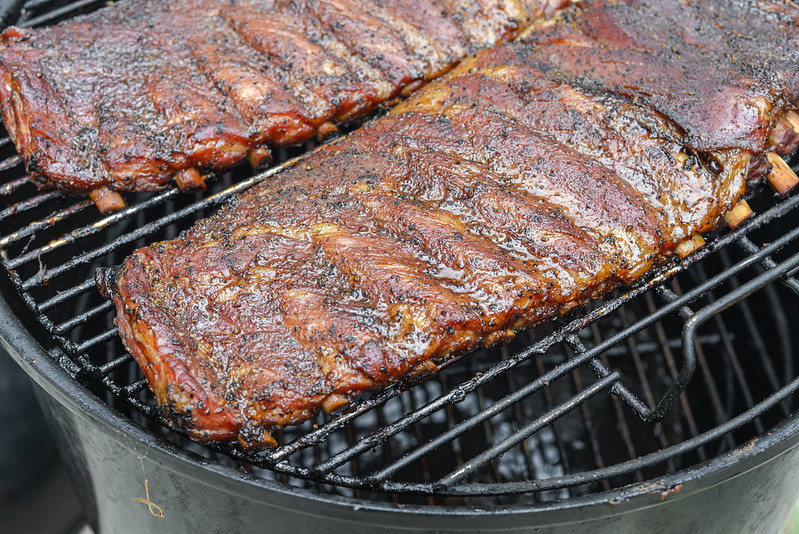 And once that was done, they were real beauties—semi-glossy with a deep orange color. Because of the braise, they were more tender than the doneness I'm used to. I'm usually shooting for meat that is still sticking to the bone, but is soft and flexible—which I test by lifting the racks from one end and judging the doneness based on how they bend. The braise rendered these racks fall-of-the-bone tender though, which, while is not necessarily desirable for standard barbecue, is what I was hoping for with adobo ribs, since falling of the bone is a trait of the best adobo meats I've had. 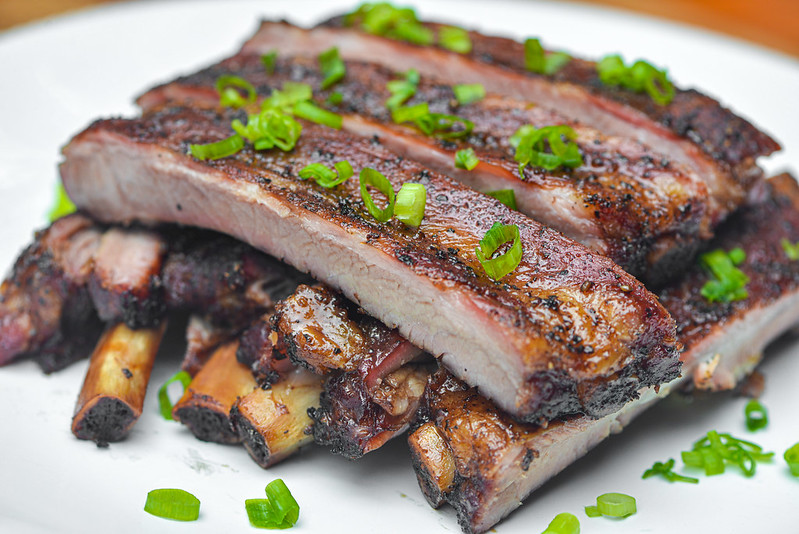 If you've had Filipino adobo before, these ribs will definitely deliver on a familiar and comforting flavor. While they didn't have the intensity of tang I was used to, they did still have a pronounced vinegar and savory soy sauce flavor. The use of garlic and pepper in the rub was a good move, because I think without out, those two additional defining notes may have gotten a little lost. The glaze was really one of the most notable parts of these, not only providing their good looks, but also a concentrated sweet and savory finish that really rounded out the experience. At some point, I'll still need to go back and make my friends some proper Filipino adobo, but as an experiment in mixing my barbecue and Filipino cooking skills, I couldn't have been happier with how this hybrid came out.