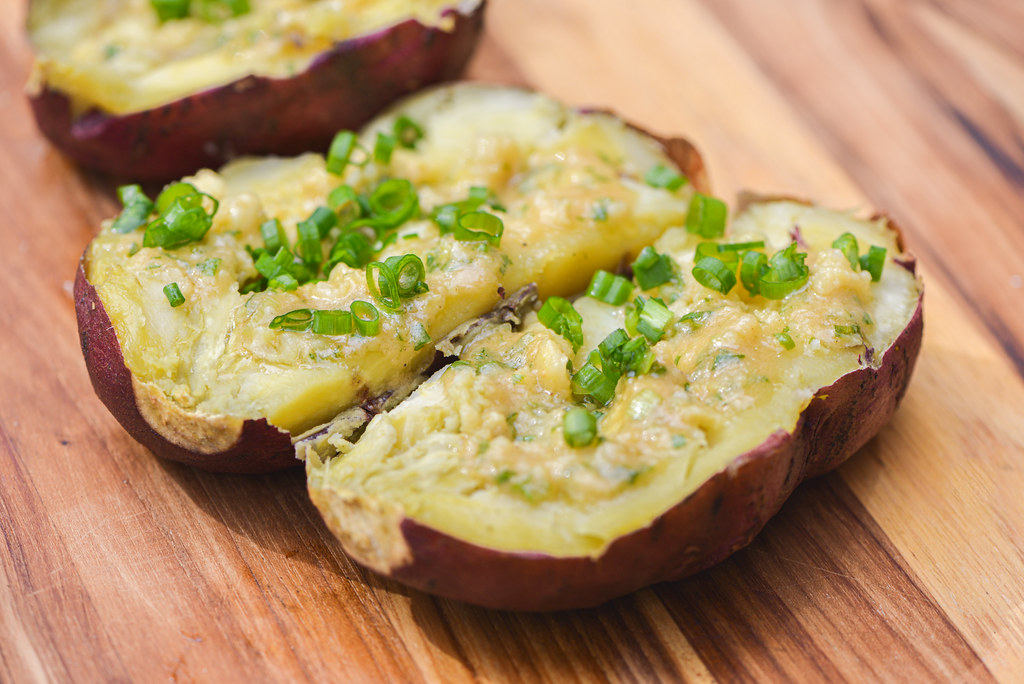 If you scroll through my recipe archives, you'll see my unending love for the sweet potato. You'll find these sugary tubers wedged, hasselbacked, and mashed along with being made into salads, tostadas, tacos, and more. My enthusiasm for these orange sweet potatoes is not shared by the wife, who finds them too overtly sugary and not ripe for her salty-slanted palate. It probably looks bad that I ignore that fact so often and keep making these sweet potatoes frequently, but I think I may have found a very suitable middle ground recently by way of these Japanese sweet potatoes with miso butter. 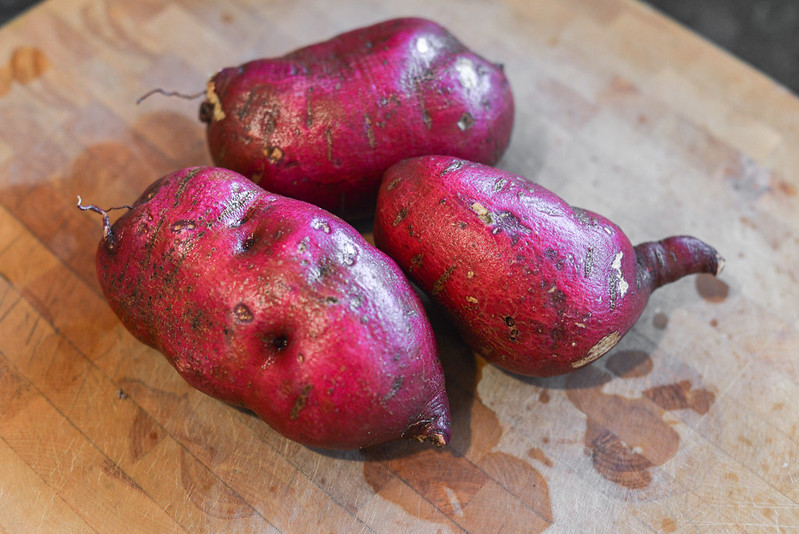 In my early grilling days, I experimented with different sweet potato types, but I let that fall to the wayside and have mainly stuck to the standard orange variety for awhile now. So it felt refreshing going to the grocery store and just picking up something different. The day I went shopping, the display of these Japanese purple-skinned potatoes were filled with mainly monster-sized specimens that left me digging deep to find four smaller ones, which I still would consider being medium on the size scale. 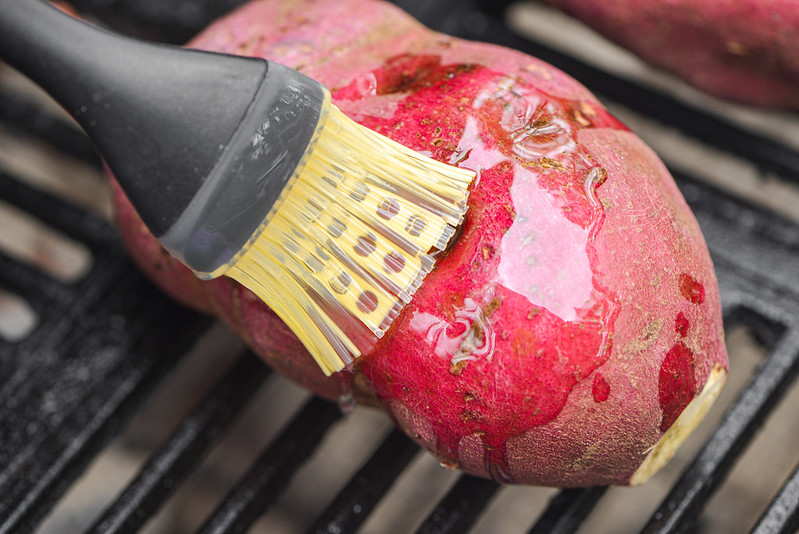 Prep for grilling was super minimal with just scrubbing off any dirt before resting them on the cool side of a two-zone fire. Once on the grill, I brushed the potatoes all over with canola oil, then covered and let them roast in a fire that was outputting a temperature just north of 450°F to start. 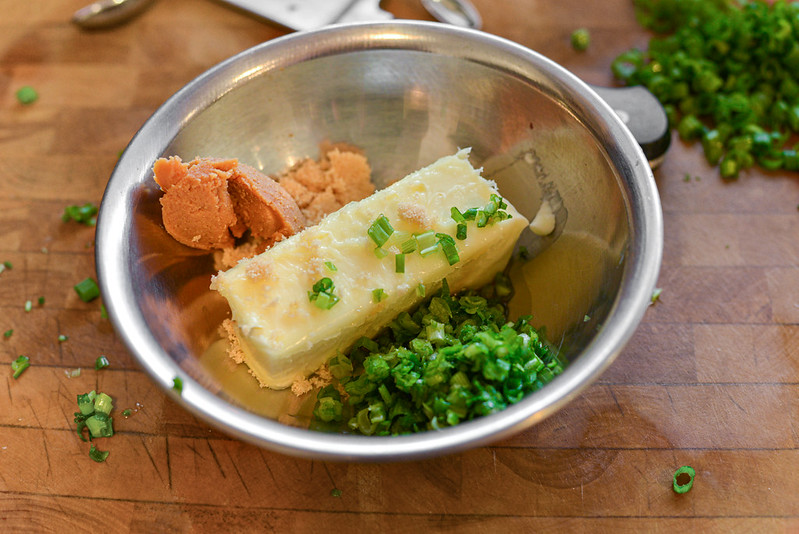 While the natural sweetness is the main attraction of sweet potatoes for me, my goal here was to give them a more savory tilt, and what better way to do that than by some miso paste. Recipes for Japanese sweet potatoes with miso butter are numerous across the internet, so there's nothing really ground breaking about mine, just that I tasted as I went and found the sweet and savory balance best suited to my taste buds. I still couldn't help but toss a little brown sugar into the mix, which really didn't make it overly sweet, just tempered out some saltiness and added an apt contrast. 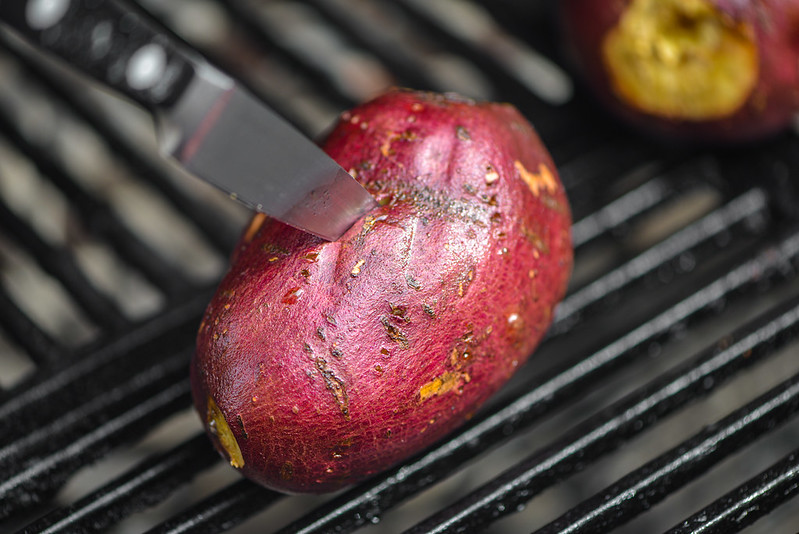 After about 45 minutes of cooking, I began to test my sweet potatoes for doneness by piercing them with a paring knife and judging the resistance—I basically wanted the knife to slide all the way through with almost no effort. It took a full hour of cooking until they finally reached that magic point, but luckily my fire kept chugging along and didn't need replenishing, although it was down to around 375°F by the time they were done. 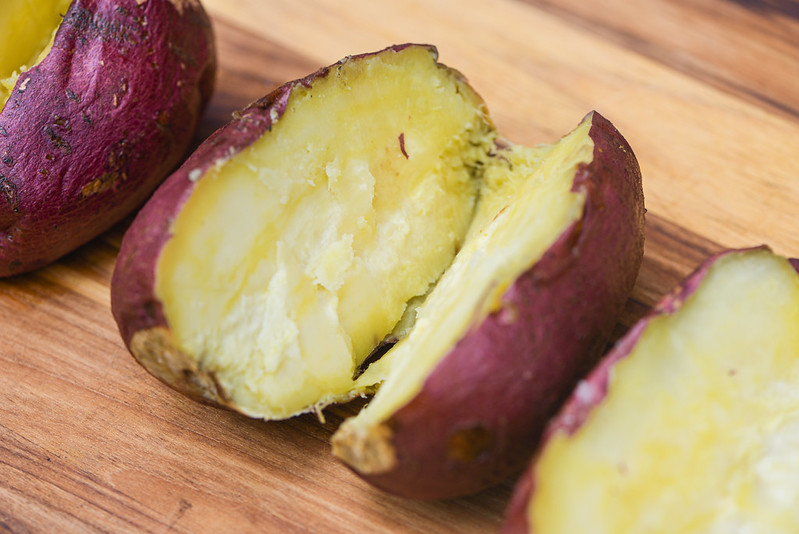 I used tongs to remove the potatoes from the grill and hold them steady while I sliced them in half. I actually tried to slice just a slit along the top at first and push them open at then ends, but that wasn't working well for me, so I went with the easier route of halving. I then let them rest until I could more safely handle them at which point I lightly mashed some of the miso butter into the flesh of each spud. 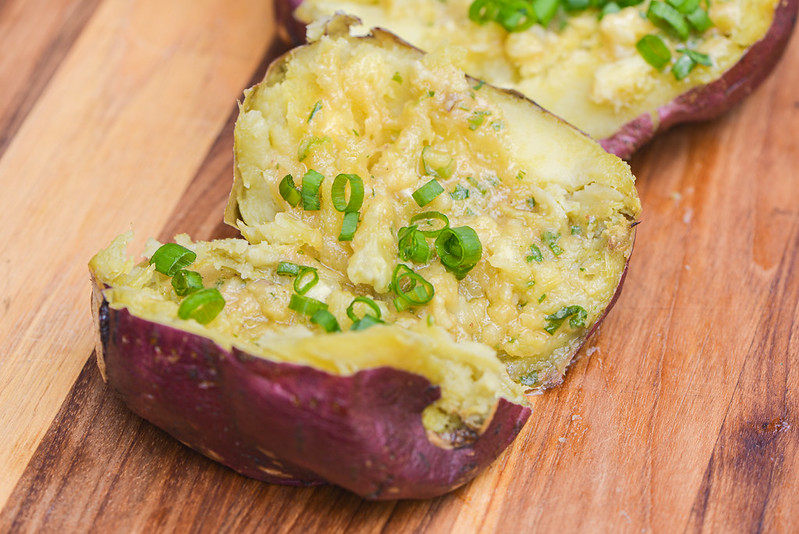 Trying to figure out how to take an attractive picture of these was a challenge, and I garnished with some scallions on top to help out. I ended up liking the extra crunch they added, so left them in the final recipe that turned out really tasty. The Japanese sweet potatoes were not as sugary as the orange variety, which made the miso butter pairing really transform their character to something more savory than sweet. That won big points with the wife, who I'm sure is hoping these will become more of the norm in our household, and that just may happen because I was pretty sold by the balanced sweetness and saltiness that had an oniony tilt that was well suited for potatoes in general. So I guess you'll be seeing more of the Japanese sweet potato variety around here, which really just releases a whole new area for recipe exploration—something I'm always looking for now being over 600 recipes deep.