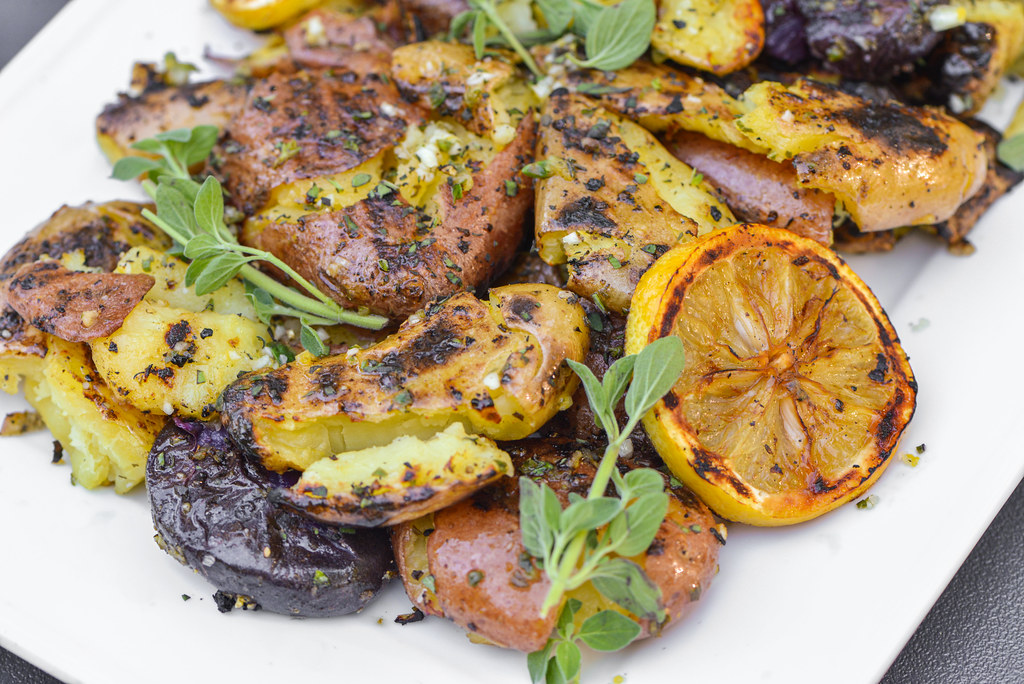 From the amount of potato recipes you can find on this site, it's pretty clear they're a go-to side for me. Actually, anytime I can't figure out what to serve along with a main, there's a good chance I'm going to pick potatoes as the answer. You would think I would tire of these tubers, but really they just represent a blank slate to gussy up in endless different ways from salads to wedges and beyond. So it stands to reason that when I needed something to round out a meal of chicken and halloumi sandwiches that potatoes once again filled that void, this time as lemon and garlic smashed potatoes—taking on some Greek influence to pair with the main dish. 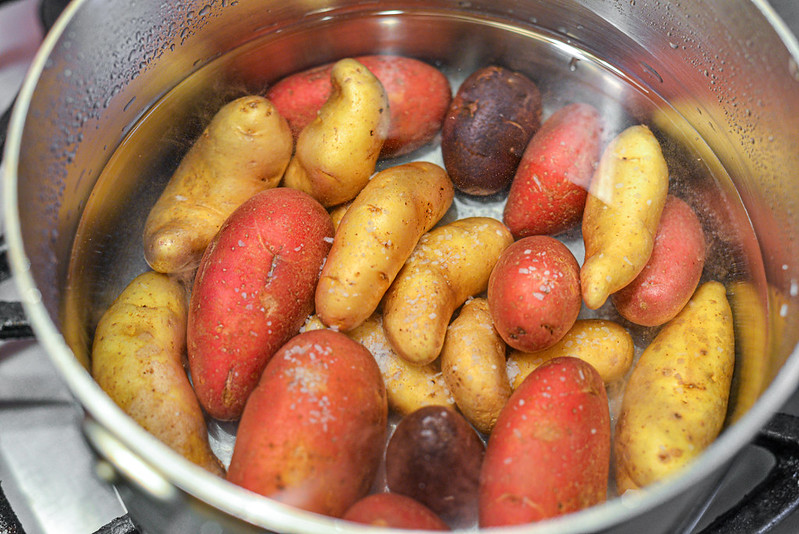 When I thought about the spuds I wanted with those sandwiches, those Greek lemon potatoes that are embedded with a bright citrusy tang from edge to edge was on my mind, but wanting to utilize the grill, I had to think creatively for a way to get that type of flavor using a very different cooking method. I thought smashed potatoes might offer an interesting solution as they're twice cooked, first boiled until tender, then smashed and grilled, and when the spuds are broken open and still hot is a good time for them to quickly absorb flavors, like lemon juice, into the flesh. 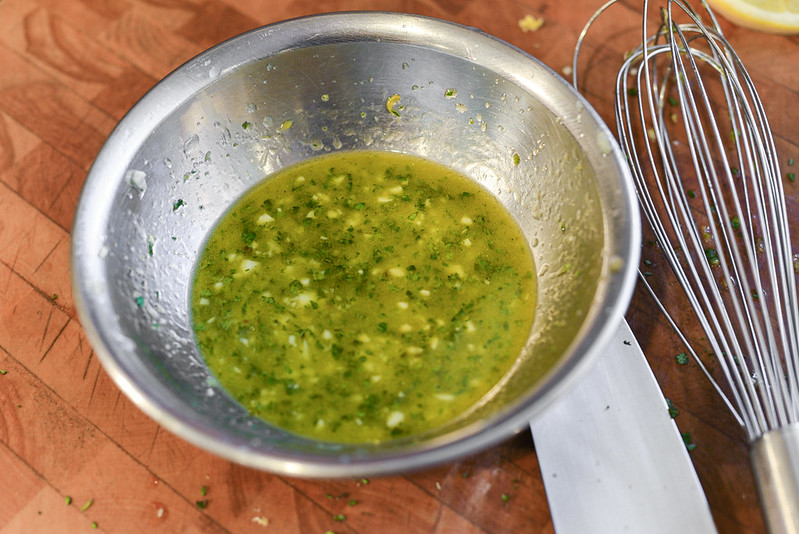 I chose a mixture of new potatoes for this, but the recipe should work with whatever variety of small potatoes you wish, being Yukon Golds, reds, whites, fingerlings, etc. While I simmered the potatoes in water to get them tender, I put together the seasoning, which consisted of a lot of lemon and garlic, hitting bot of those primary notes heavily, then also extra-virgin olive oil and dried Greek oregano. 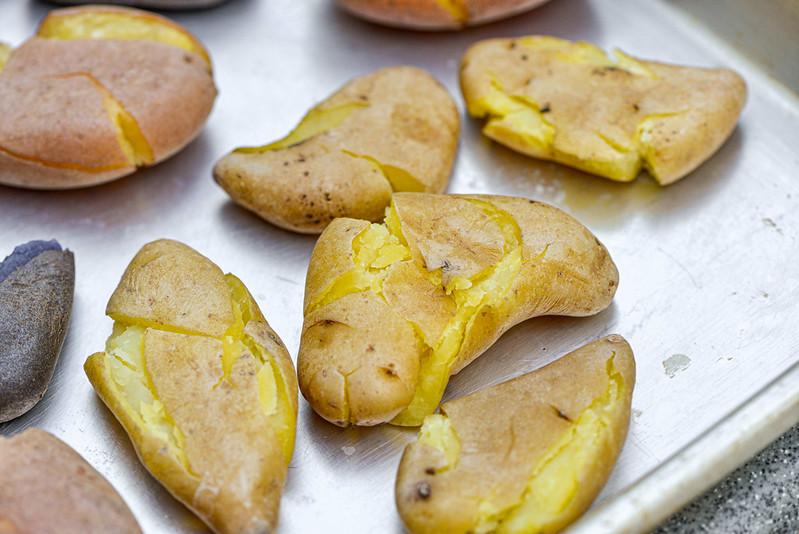 I tested doneness on the first cook by piercing the potatoes with a paring knife, and once it slide through the largest of the lot with no resistance, I strained the spuds and let them sit until they were cool enough to handle. I then arranged the potatoes on a baking sheet and gently pressed down on them to just break open the skins and expose some flesh, but stopping before they fell apart—that's a delicate balance that might take a few shots to get right, and even then it's easy to mess up since each potato is different. 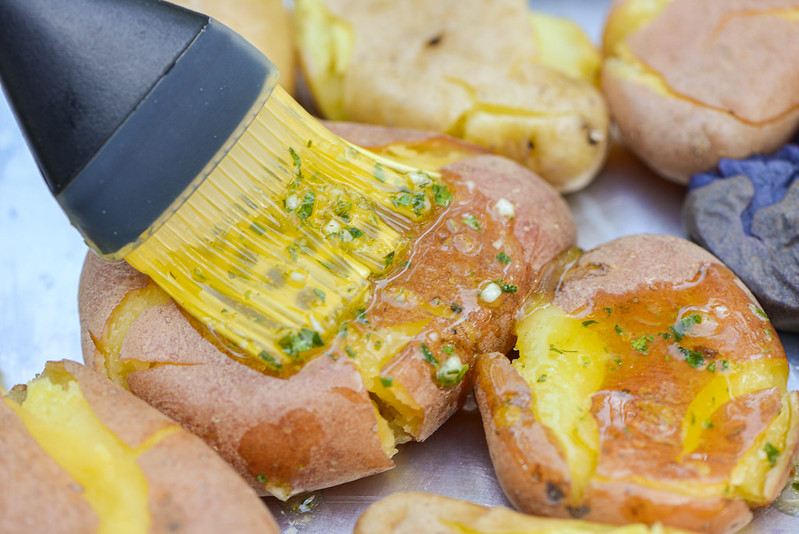 The smashed spuds were somewhat fragile, so I needed a way to get that seasoning on that wasn't my usual tossing in a bowl, because that action would have certainly broken them apart. I opted to brush on the lemon mixture, applying about a a third of the liquid on one side, flipping the potatoes, and brushing on about another third of the seasoning, reserving the rest for later. 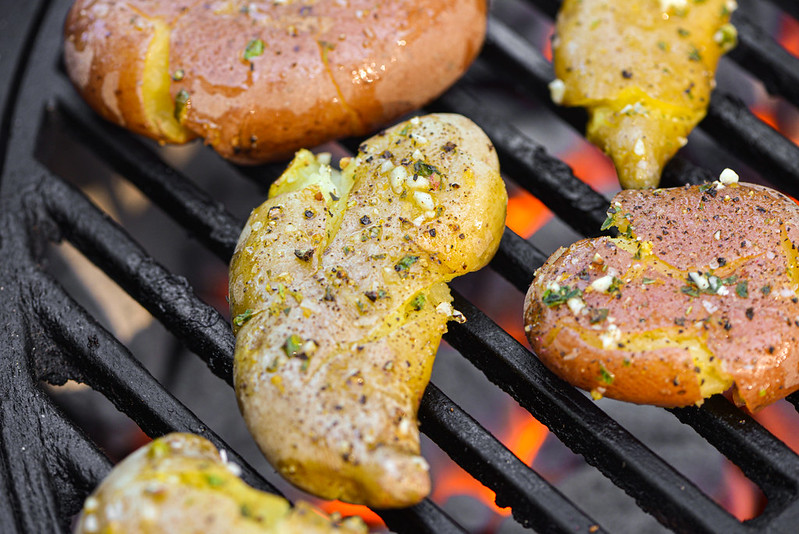 I then placed the potatoes over a hot fire. Since these were already tender throughout, the goal here was not to cook them, but to give them another layer of texture and flavor from the high heat of freshly lit charcoal. 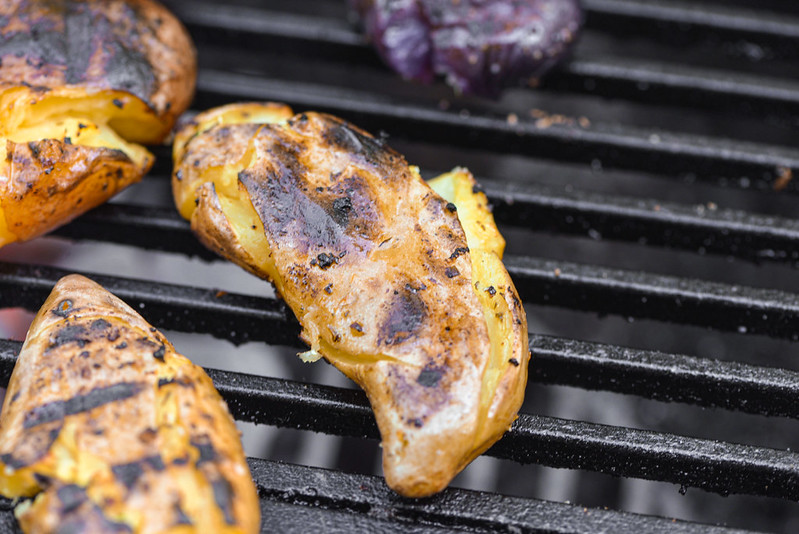 It didn't take long for the potatoes to brown and char in places, which is what I was after. I flipped and moved them around carefully as necessary to avoid burning. Not all the potatoes cooked at the same rate, but it took a little under ten minutes total until all the potatoes had picked up the level of color and char I wanted to get in each bite. 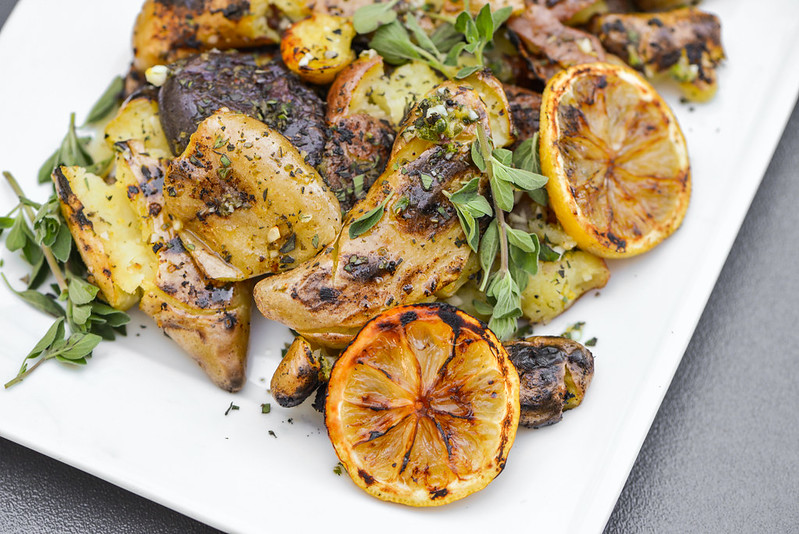 Once all done, I piled up the spuds on a platter and brushed on the remaining lemon mixture. With that, I had one delicious side on my hands that, while it was an ingredient I use incredibly frequently, tasted like nothing that had come before. Unlike traditional Greek lemon potatoes, that citrus tang wasn't fully embedded in every inch of the flesh, but it was strong and very present, giving a touch of lightness to an otherwise fairly hearty side dish. There was a good garlicky bite and herbal component that firmly gave these a Greek tilt, but I thought the best thing about them was the front and center grilled character that came thanks to the charring and the addition of a mellow smokiness that was due to some dripping oil causing a little smoking action from the coals during the grilling process. The fact that I can take the blank slate of the potato and adapt it fit into almost any meal means that, while there's already a ton of potato recipes to choose from on this site, there will probably never be a cessation of new creations utilizing them. 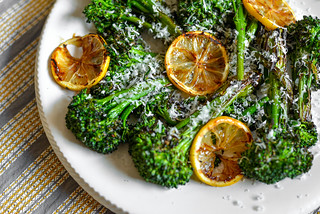 Grilled Broccolini with Lemon and Parmesan