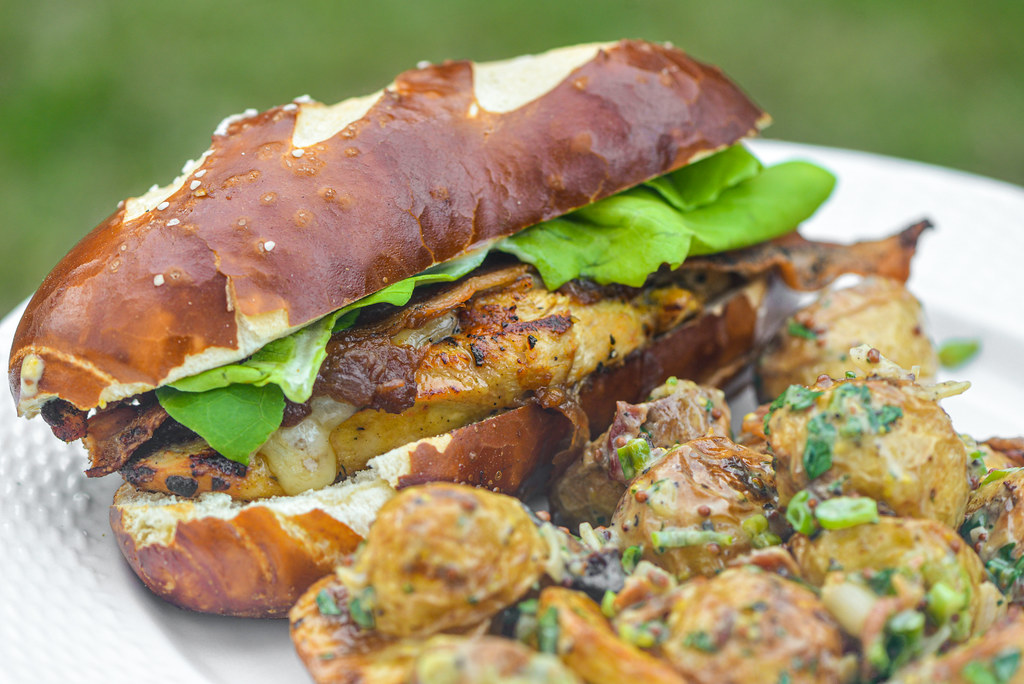 If you're a regular follower of this blog you may have noticed that about 90% of the recipes I share out are cooked within five to six Meatwaves throughout the year. I do this purposefully for a couple reasons: I find it easier to cook in large portions and it also gives me an audience for feedback on each dish, allowing me to know what's working and what's not, which leads to the best final recipes for sharing. In recent years, grilling for just me and wife has become more sporadic, but the last month and half of a stay-at-home order has changed that dramatically. I'm now grilling way more often, focusing on recipes that can be made for two with little food waste, but can also be easily scalable up for the usual recipe portions. These mustard-marinated chicken sandwiches fall into this category since they gave me the opportunity to use up some ingredients I already had on hand and were a perfect thing to make to serve a couple. 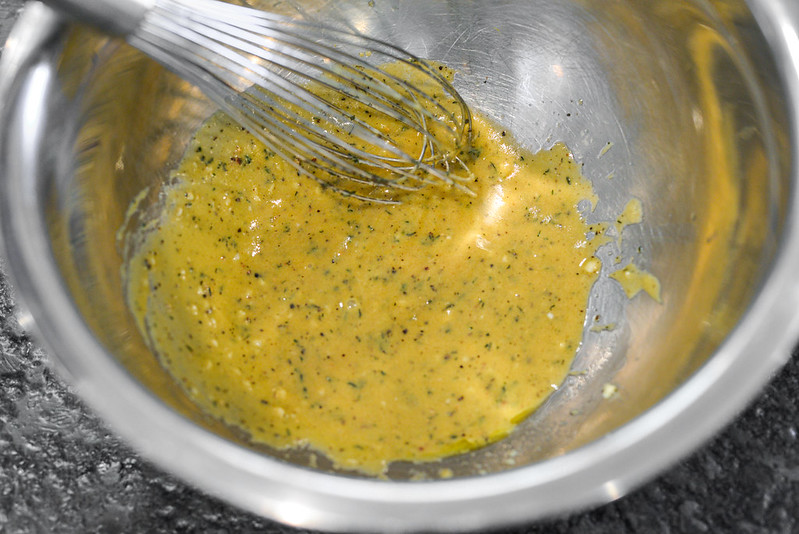 The marinade was partially devised based on what I had on hand in the fridge. I thought of what things would taste really good together on chicken and landed on a Dijon heavy sauce whose pungency was contrasted by dark brown sugar, given acidity from lemon juice, a sharp bite from garlic, and thyme for a background herbal component. 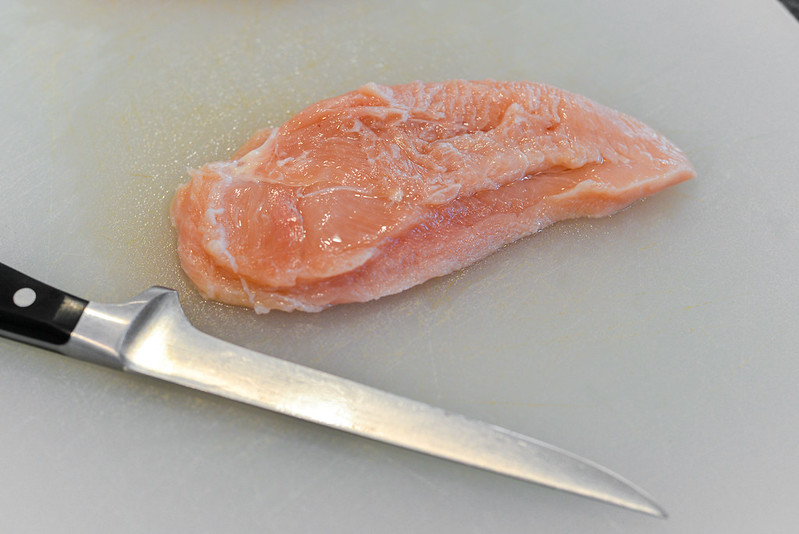 The chicken breasts I had in the freezer were on the larger size, so I opted to use only one for two sandwiches, but split the breast in half horizontally first. This had the benefit of creating a chicken breast piece that was also a fairly even thickness, which is a big help in cooking it evenly and avoiding drying it out. 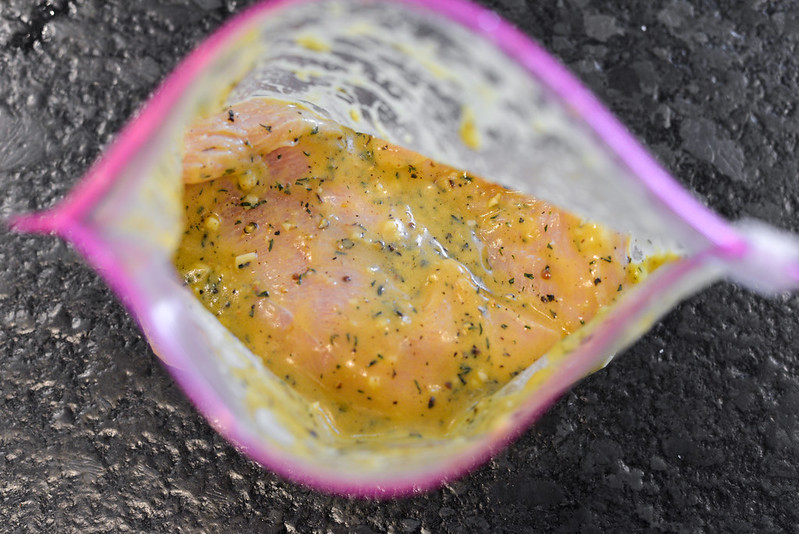 This somewhat thin chicken breasts didn't need all that much time to marinate—I figured a couple hours would be more than enough. The sauce wasn't so heavily acidic though that an overnight stint wouldn't work, so if you're all about prepping ahead of time, you could go ahead and get this step of the recipe done the day before. 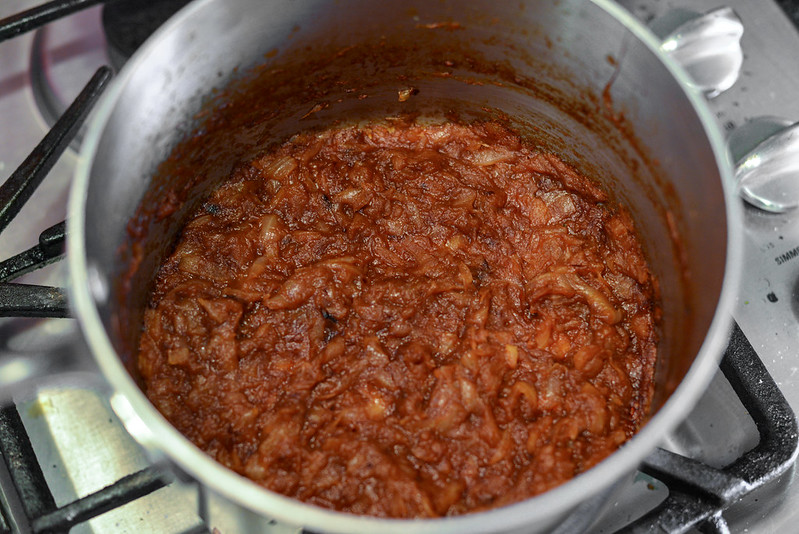 I had made a batch of caramelized onions for mushroom Swiss burgers the week before and only used half of them in that application. So I was thinking of a way to use up those deeply browned onions and on these sandwiches they seemed like they would add a nice touch of sweetness to counteract the sharpness of the mustard. 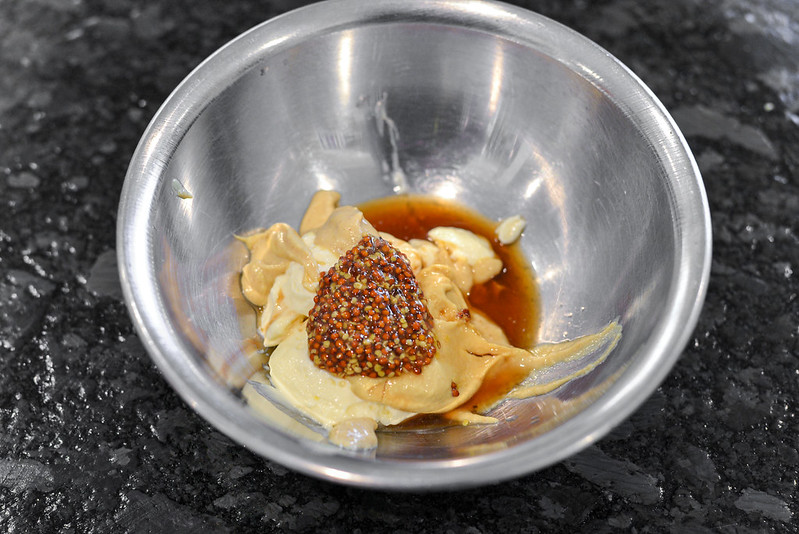 Using the sugary onions made me feel confident that another hit of mustard would be the right call for the sauce. I went in double with the Dijon here, using both the whole grain and smooth varieties, which I mixed with some mayo, lemon juice, and Worcestershire, which gave the sauce a nice savoriness too. 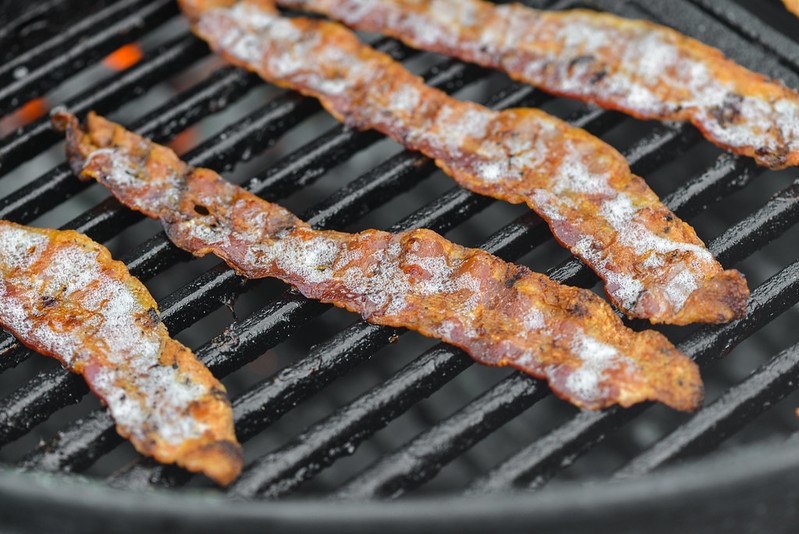 Also on the list of things I needed to use up was bacon—I had bought a mega pack and figured I'd find many things to use bacon in over a couple weeks period. If you haven't tried grilling bacon yet, it may end up being a life changing revelation. It's so easy to cook a large quantity and you don't have to deal with the mess or smell that can be negatives of stovetop cooking. On the grill, you just need to cook it over indirect heat, covered, and with a hot fire it'll be well browned and extra crisp within ten minutes or so. 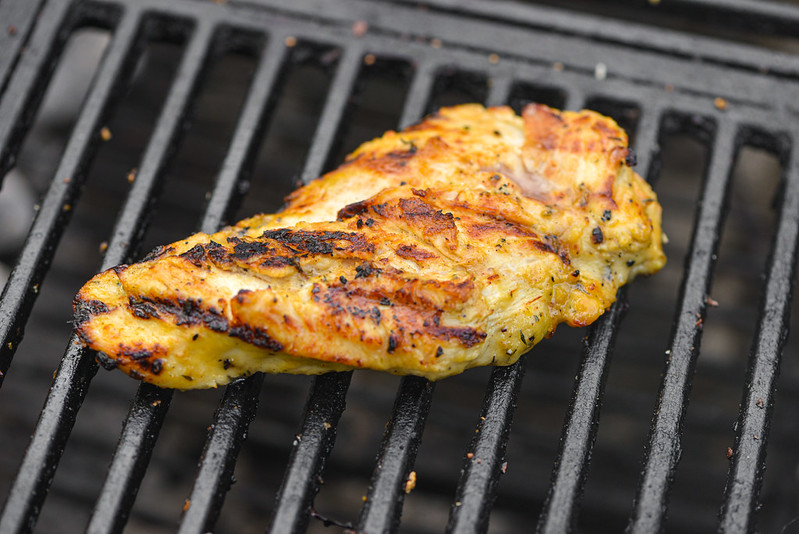 After I finished the bacon and had it draining on a paper towel-lined plate, I placed the marinated chicken breasts over the hot side of the two-zone fire I had going. I'm not a big fan of chicken breasts on the grill because they can overcook so quickly, so I kept a very watchful eye on these, flipping them occasionally, and moving them to the cool side of the grill when then were about ten degrees shy of my desired final internal temperature of around 155°F. 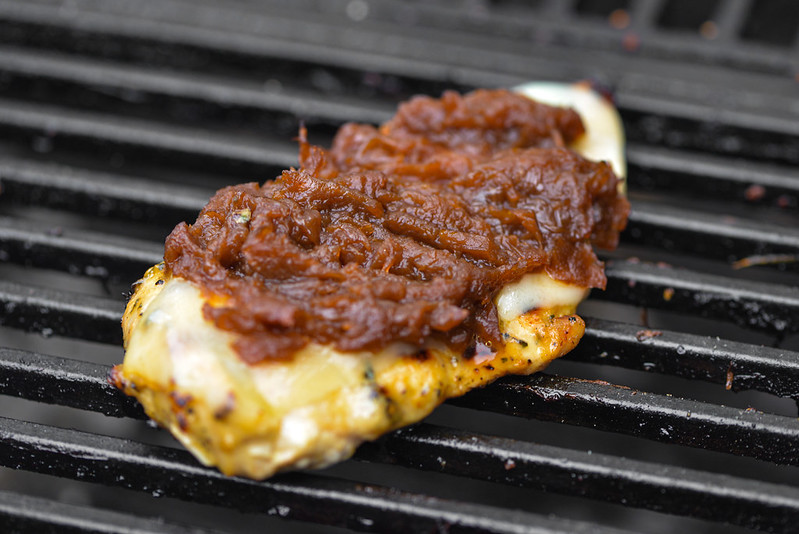 Once over indirect heat, I topped the breasts with Swiss cheese—also leftover from those mushroom Swiss burgers—and caramelized onions and then covered. I let the chicken continue to cook until the cheese was completely melted, and during that time, the meat also reached its intended final temperature. 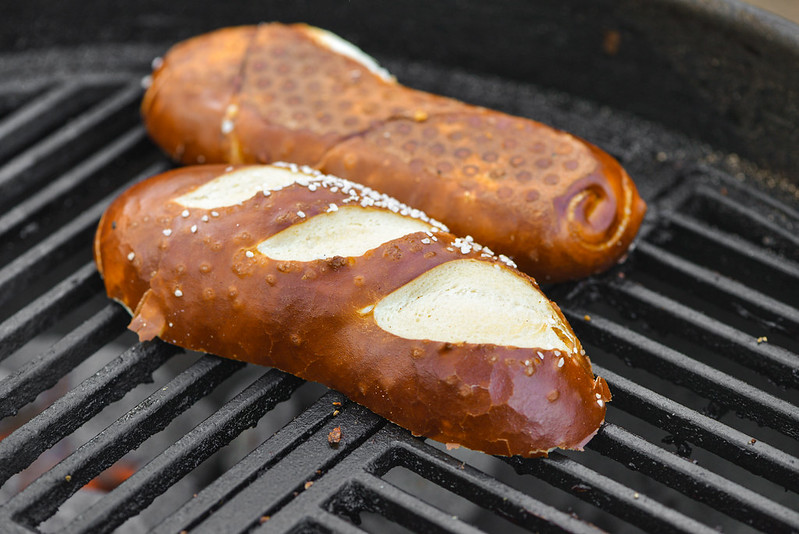 Then, just before serving, I quickly toasted the buns, which I had chosen a pretzel variety to pair with all the mustardy flavors going on. Once they were warmed, I assembled the sandwiches with the topped chicken, bacon slices, and some lettuce, which I had leftover from making nam khao (Laotian crispy rice salad) lettuce wraps the night before. 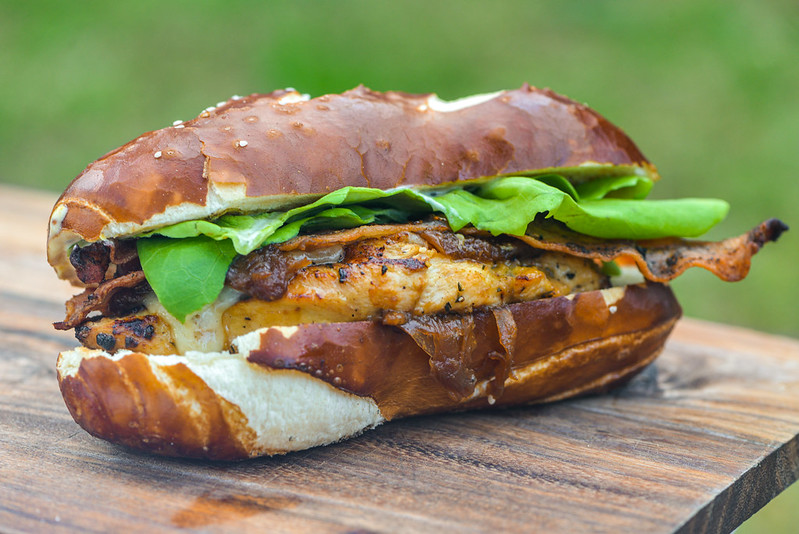 These sandwiches really left me thinking that maybe I need to readjust my cooking habits a bit. I'm usually an advance planner and have a very clear idea for everything I'm going to cook, but I really cobbled these together due to current needs of making small meals that use up ingredients I have on hand, but the sandwiches tasted as fully realized as anything else I make. The mustard marinade did the chicken a lot of justice, giving it a sharp and lightly sweet flavor that worked well with the natural flavor of the meat. Swiss was the right mellow paring for the chicken, bacon brought that irresistible salty crunch, and the caramelized onion the hit of sweetness to make it really feel complete. Under normal circumstances, these sandwiches may have never come to my mind, so I do think a return to more routine, everyday grilling is called for in my future to see what other delicious things my brain can come up with. 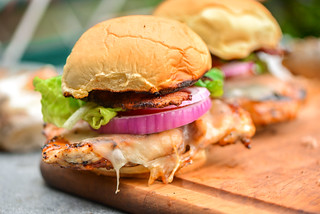