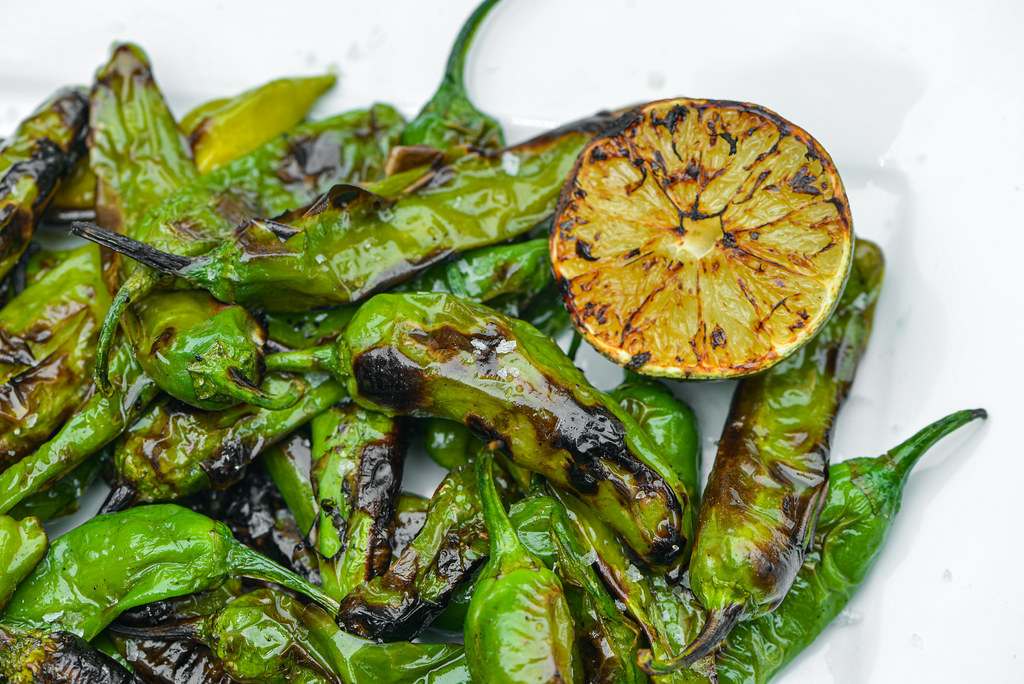 Whether they're shishitos or pimientos de Padrón, I really love these type of blistered small green peppers as a side or appetizer. I find their soft flesh, fruity flavor, and the occasional wave of heat incredibly satisfying, and the fact that I'm way more into them than my wife just makes me happier because it means there's little to no competition when I devour an entire plate myself. For as much as I adore shishitos, I realized I have never posted a recipe for them, and that may be because making them doesn't really require much of a recipe, but there's definitely more than one way to gussy them up that makes sharing preparations a worthy cause, and these shishitos with sesame, lime, and sea salt are one of my favorite flavor combinations. 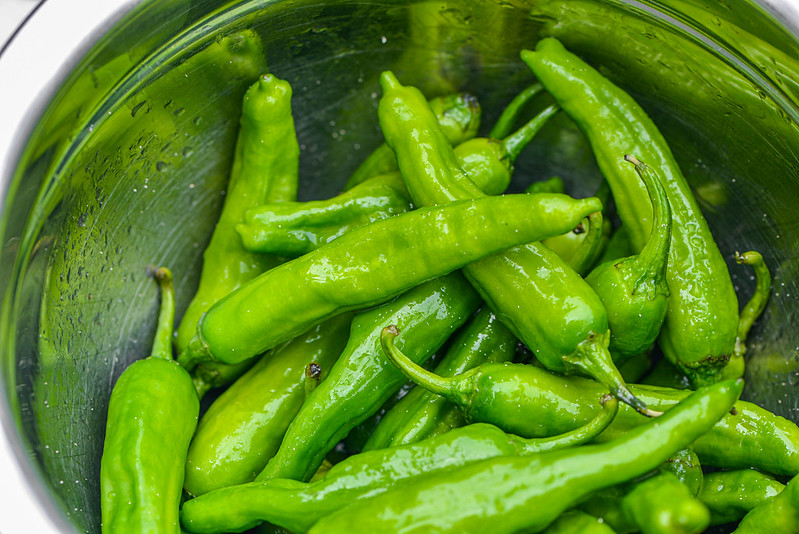 Making shishitos just requires a little oil and a hot cooking source—pan frying or grilling are the most common methods. There's the ability to start layering in flavors in the initial seasoning phase of the process by the choice of oil and cooking medium. Instead of using just neutral canola or vegetable oil here, I added in a bit of sesame oil, which gave the peppers a toasty and nutty sesame taste in the end. 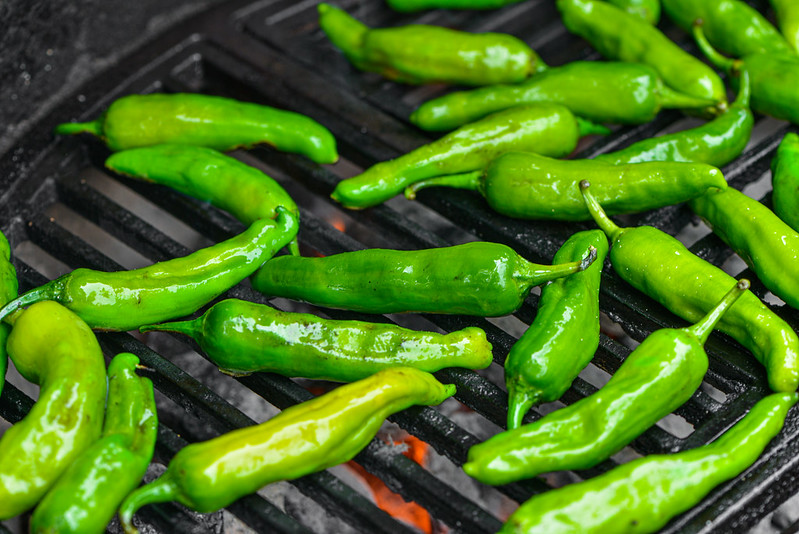 The cooking method also effects the end flavor and texture with frying leading to a more blistered pepper, while grilling imparts a little smokiness and and char, giving the shishitos a distinct grilled flavor. It should come as no surprise that I almost always opt for grilled, and I cooked this batch of peppers over direct heat utilizing a freshly lit fire while it was at its hottest. 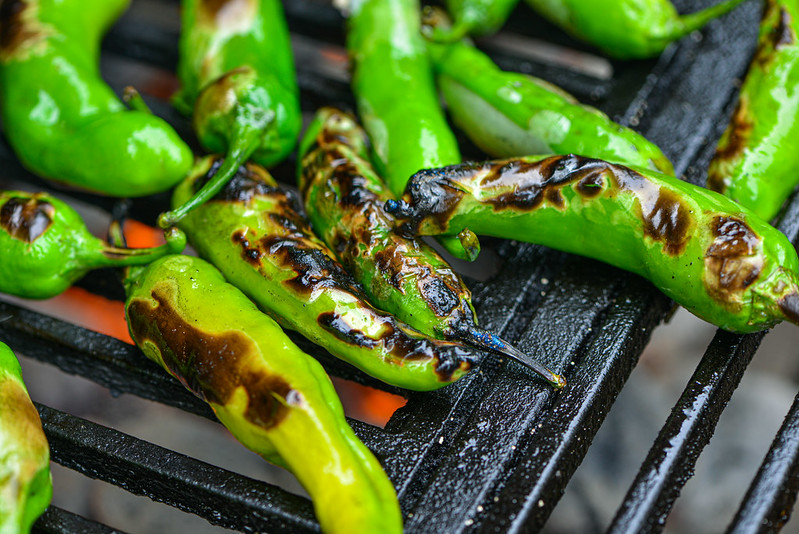 A super hot fire meant these cooked incredibly quick, so I kept a close eye on them and turned and moved them around constantly to get peppers that were charred, blistered, and completely tender, but not burnt, which can happen very fast. As the peppers were done, I transferred them to a serving platter, and once the last one finished its journey from fire to plate, I squeezed on some lime juice and sprinkled the peppers with a flaky sea salt—I used Maldon for this. 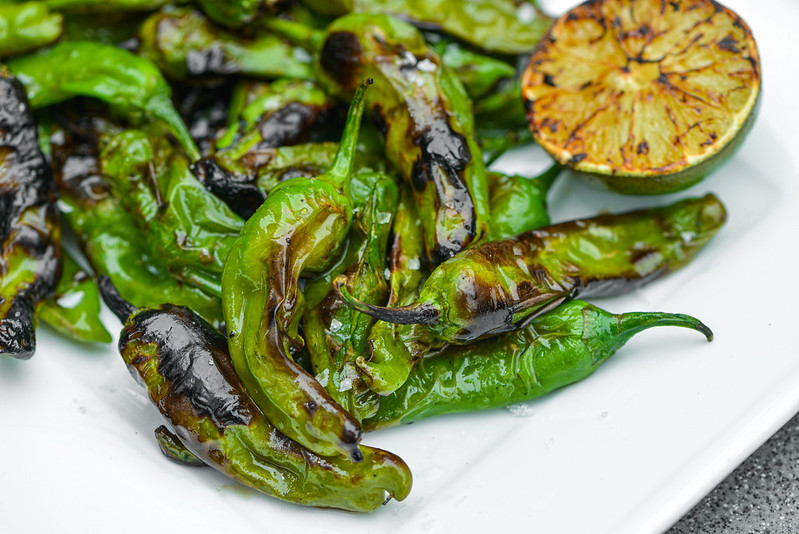 I don't have many recipes that clock in under five minutes from start to finish, and I bet if I go through the archives and do find some, they wouldn't be as delicious and satisfying as this super fast recipe was. After these shishitos were finished, I put some burgers on the grill, and I couldn't help myself from finishing almost all the peppers in the time it took to finish cooking the burgers. The fruity flavor of the pepper felt at home with the toasty sesame undertone while the lime brought a great bright and fresh acidity. Hitting those large pieces of salt made sure all of those flavors really shined, but my favorite part of eating my way through the tray of shishitos was encountering the couple spicy ones, which left a tongue tingling heat that enhanced the flavor of the next few peppers I would eat after that. While it was common to find shishitos in my farmer's market in the past, I've noticed them being pretty consistently available at my grocery store now, so I'll likely be experimenting more with using them in other cooking scenarios and sharing out all the excellent things that come from that.