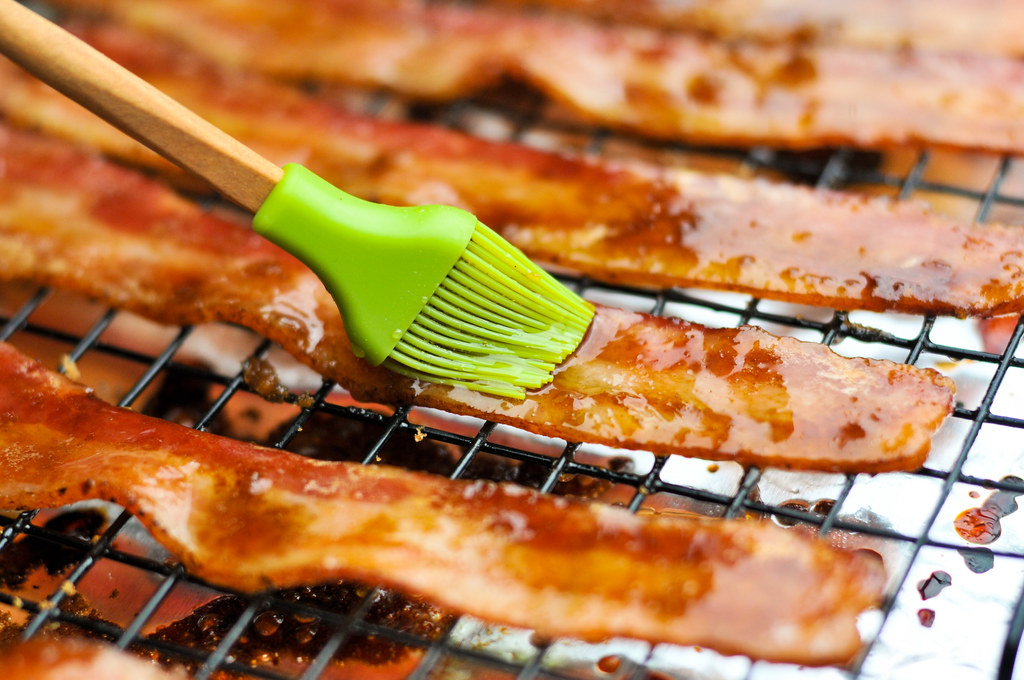 There are few pleasures in life quite like pig candy. This sugar coated treat hits so many culinary high marks it's insane—smokey, salty, sugary, spicy, crispy, and (most important) meaty. Pig candy, otherwise known as candied bacon, first came into my life while helping out on the competition barbecue circuit, where more than one neighborly team cooked up a batch and shared a couple strips with me. So when I wanted to learn the ropes of pig candy myself, I turned to a favorite barbecue blog with solid roots in competition, Patio Daddio BBQ, where pitmaster John Dawson has amassed a treasure trove of great grilling recipes. 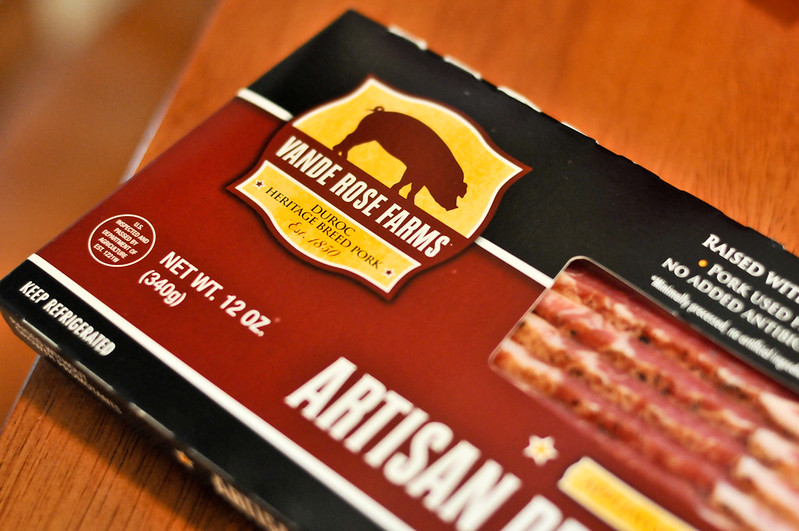 You can start your pig candy with regular or peppered bacon, but I recommend no matter which direction you go, using high-quality thick cut strips. There's going to be a lot of sugar introduced into this bacon, and with thick-cut, you ensure a better balance between meaty, salty, and sweet, along with a heftier final product that's sturdier compared to more brittle thin-cut strips. 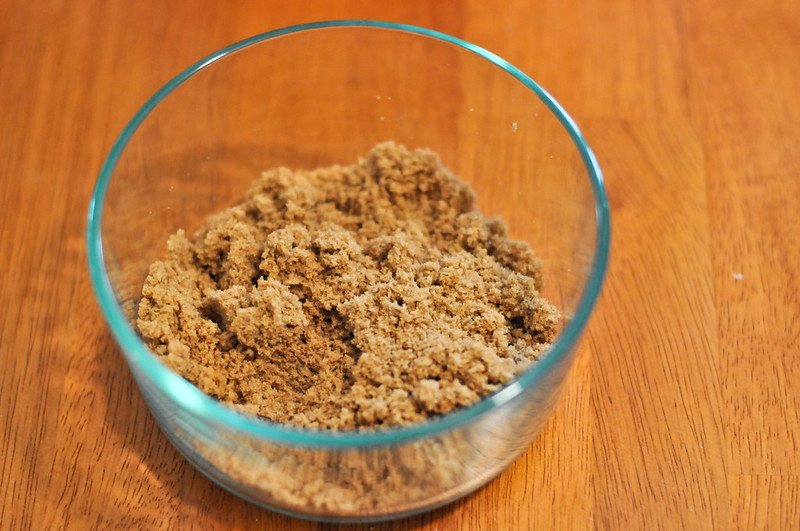 So let's talk sugar now. When it comes to grilling and barbecue, dark brown sugar is almost always my number one choice for its molasses flavor, and it's perfect for pig candy. To add a little extra something, cayenne pepper is mixed in with the sugar, which adds the faintest heat that you may not detect in the end, but would miss if it weren't there. 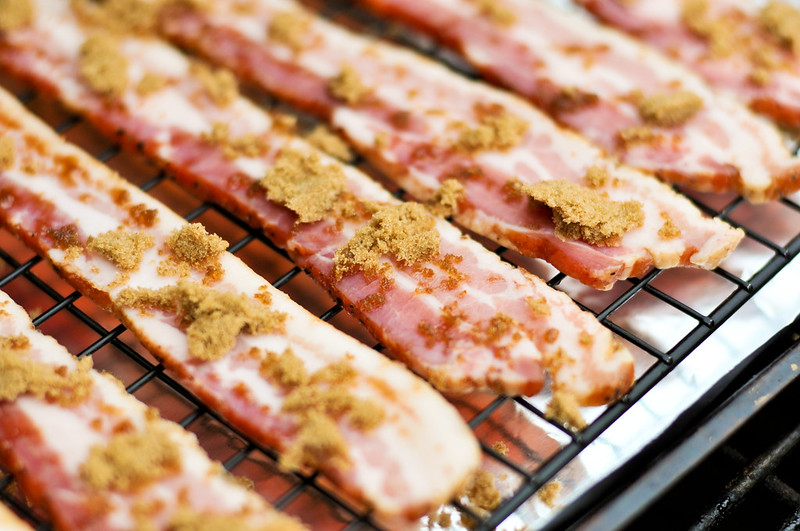 To create flat, evenly cooked strips, I lay the bacon on a cooling rack set inside a rimmed sheet pan (lined with foil for easy clean-up). Two-thirds of the sugar and cayenne mixture is then sprinkled on top of the bacon. Don't worry about evenness too much here, the sugar will melt and coat the bacon pretty completely as it cooks. 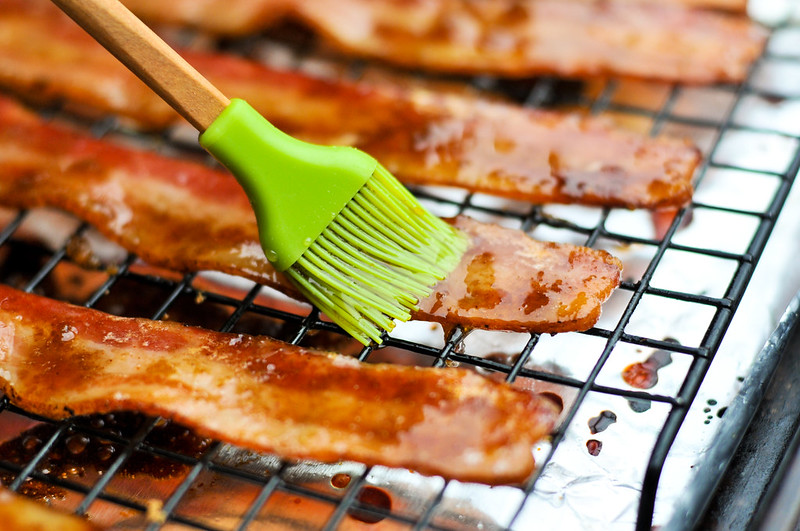 Once the bacon starts to crisp around the edges, it's given a second coating of sweetness via a brushing of maple syrup. This is the most important tip I picked up from Patio Daddio BBQ, since this extra sugary layer adds a depth of flavor that's not found in a lot of pig candy I've had. Once the first side is brushed, the bacon is then flipped, brushed again, and sprinkled with the remaining sugar. 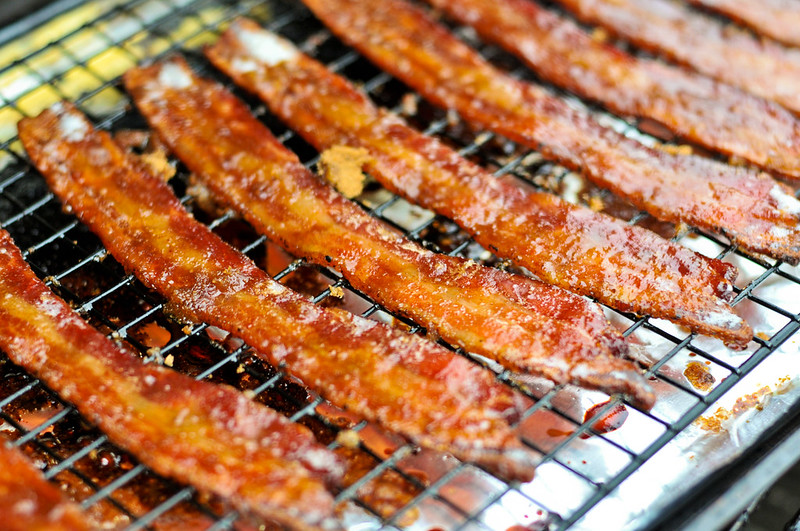 About fifteen minutes more, and this bacon comes out throughly crisp and candy coated. The caramelized sugar is amazing against salty and smokey bacon, creating a savory treat that's hard reconcile where it belongs within established meal categories—appetizer, side, snack, or dessert. It really cuts across all boundaries of flavor and designations, which is partly why it's so great—anytime is a good time for pig candy!