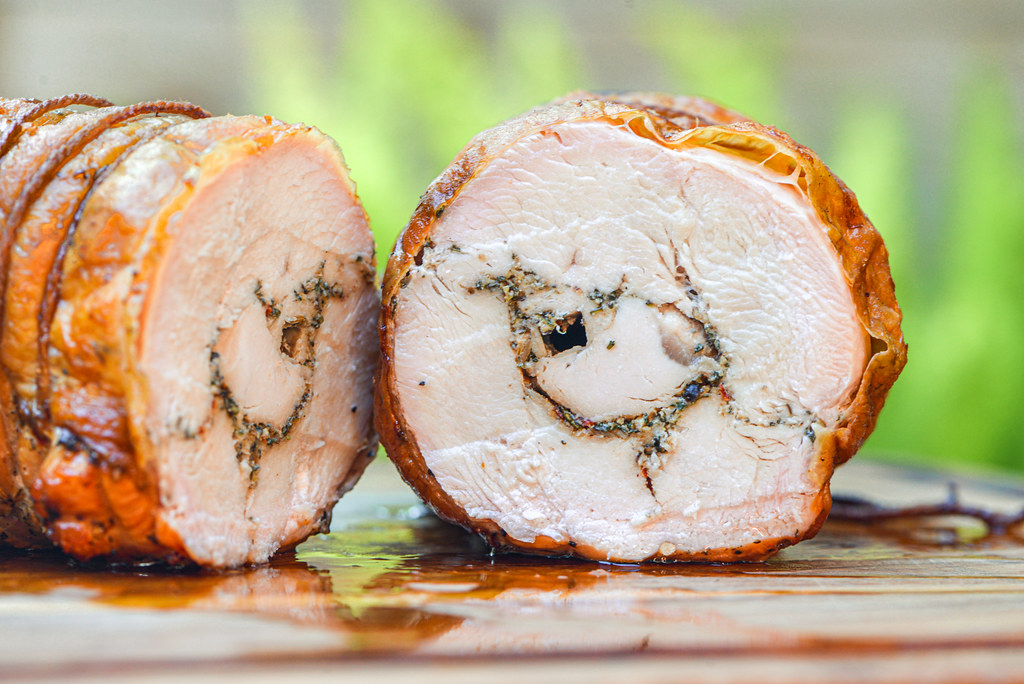 I keep coming back to porchetta for good reason—the seemingly minimal seasoning stuffed inside is actually a powerhouse herbal, garlicky, and spicy combo that's as addictive as it is delicious. So far I've done a fairly traditional porchetta, a smoked variation, and one where leftovers were made into sandwiches, and after all of those recipes, I was left still wanting more. This latest incarnation came from a recipe by Kenji Lopez-Alt that subs out the standard pork for turkey to make a Thanksgiving-worthy main dish that has a whole lot more character than your standard centerpiece bird. 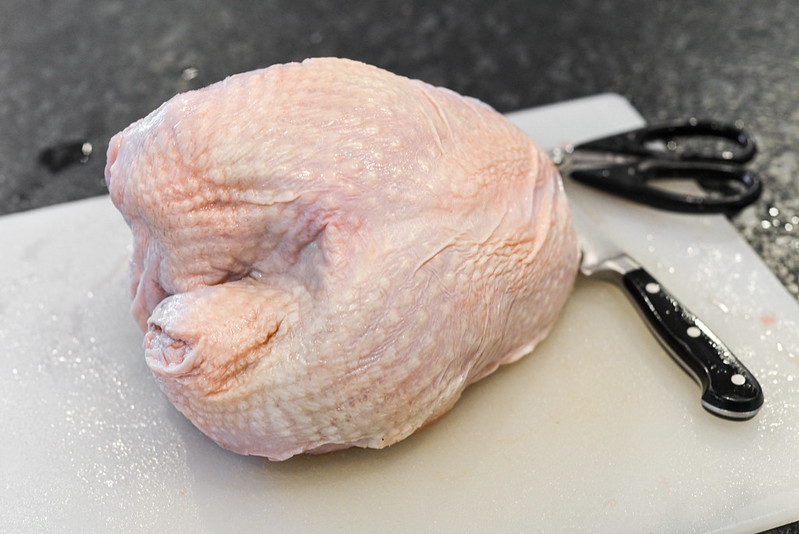 The real reason this turkey porchetta is coming up now is because I had a turkey hanging out in the freezer from a cancelled 2020 Thanksgiving that I was running out of time to do something with. Rather than defrost it and roast it whole, I opted to butcher the bird into pieces and use each set of parts for a distinct recipe with the legs getting grilled and brushed with a white barbecue sauce, the thighs and wings being smoked and turned into an empanada filling, leaving the remaining breasts to be detached from the bone and rolled into skin that was originally surrounding them to make this porchetta. 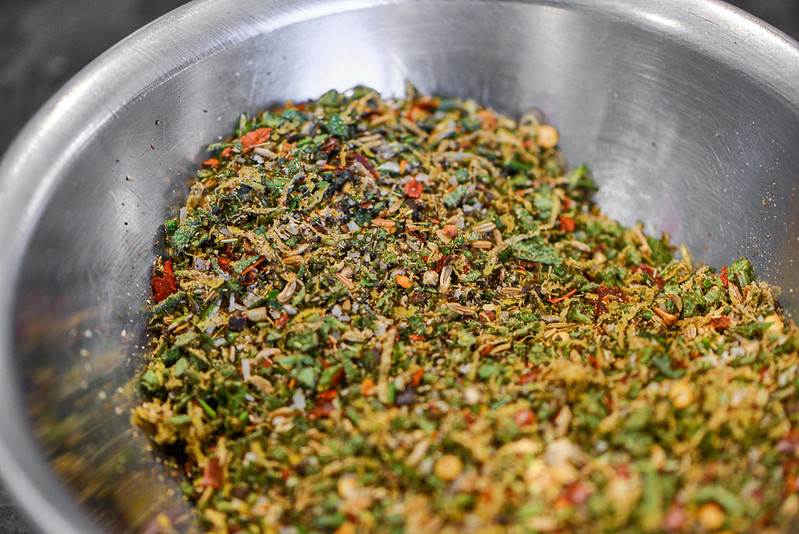 Before doing that though, I had to make the seasoning mixture, which I used the recipe I've developed and prefer. To make it, I began by toasting and then grinding black pepper and fennel seeds. Those were then combined with an herb trio of sage, thyme, and rosemary along with a good portion of garlic, lemon zest, and crushed red pepper. 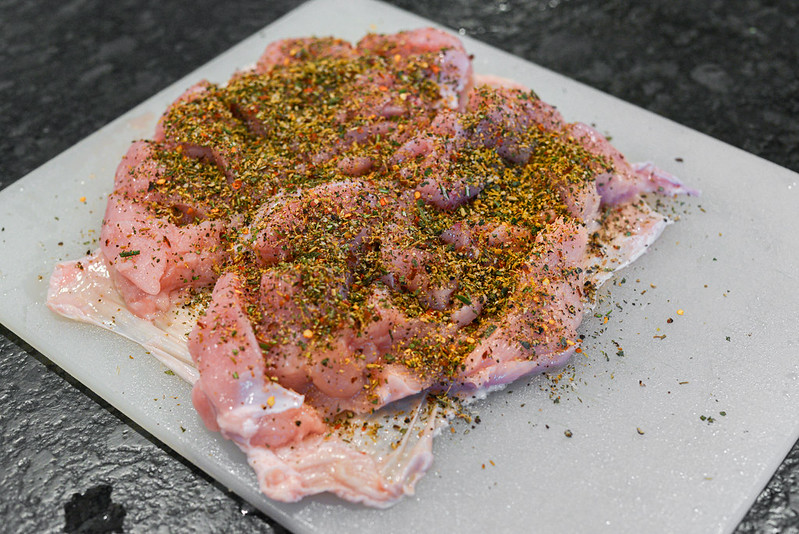 After carefully removing the skin with my fingers, I laid it flat on a cutting board and then used a boning knife to detach the breasts from the bone. I situated those on top of the skin and scored them in a diamond pattern to create valleys for the seasoning mixture to fall into. Next I spread the rub all over the exposed meat, using my fingers to get it in those cut crevices for maximum coverage. 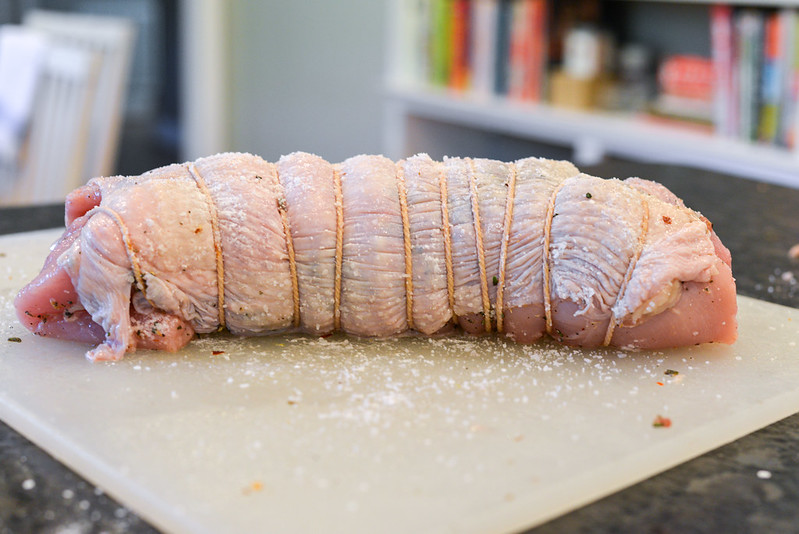 Next came the hard part of rolling the breasts inside the skin and securing it closed with butcher twine. This part is much, much easier with pork belly, which has a thick skin that makes the job fairly simple, but the turkey slipped around a lot at first and took a couple tries to get those first few knots right, but once the foundation of the roll was there and secure, the remainder of tying it together went pretty smoothly. After I had it all securely tied up, I seasoned the exterior with salt and baking powder. That last ingredient helps get a crispy skin. I then placed the roll on a wire rack set in a baking sheet and stuck it in the fridge overnight to allow the exterior to air dry and to give the salt time to act as a brine to enhance moisture retention and flavor. 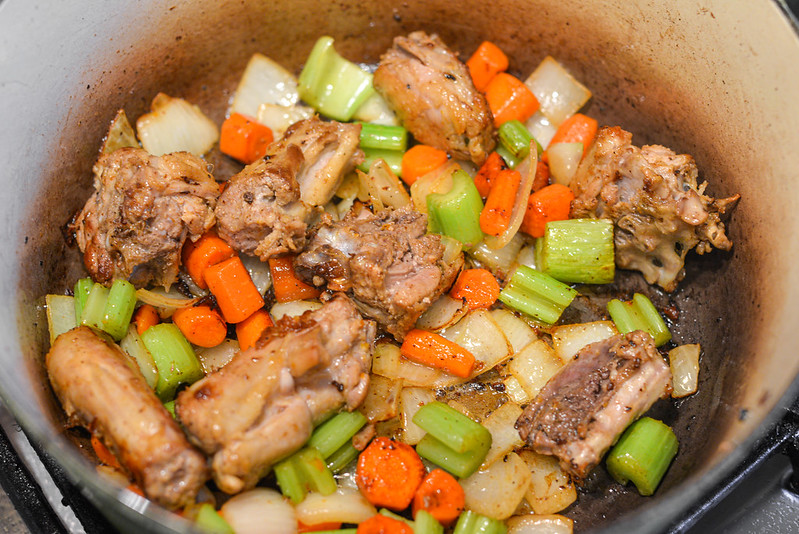 I didn't write a gravy into the recipe because it just added to overall length and the gravy really isn't all that necessary with porchetta. However, you will be left with bones that you can make good use of by making a stock to turn into a gravy. To get a brown stock for gravy, I like to start by cooking the leftover turkey pieces and vegetables until browned and a good fond develops on the pan. I then deglaze the pan with chicken stock and allow the stock to simmer with the turkey and veggies for about 30 minutes to an hour. 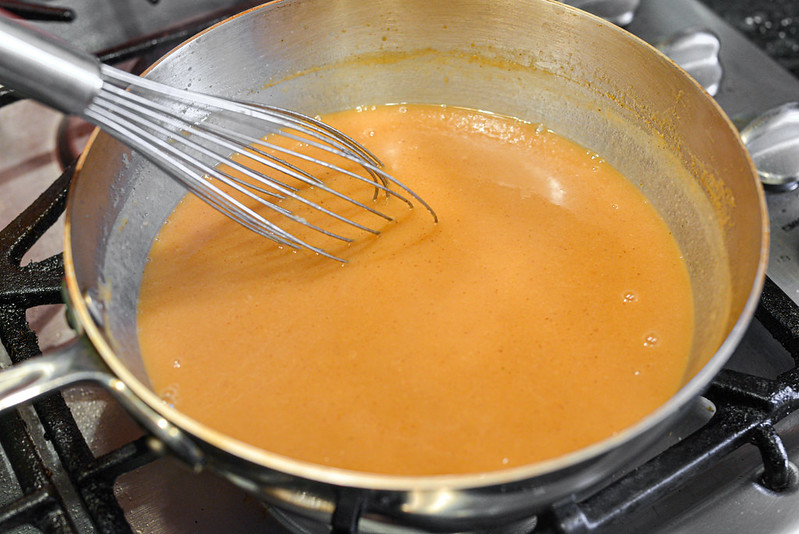 After straining the solids from the stock, I then make a roux with equal parts butter and flour whisked together over medium-high heat until pale golden brown. Next I whisk in the turkey stock slowly until I reach a consistancy just slightly thinner than I want my final gravy to be, knowing it will thicken up a bit still and will likely be less viscous when it's actually served at a lower temperature. 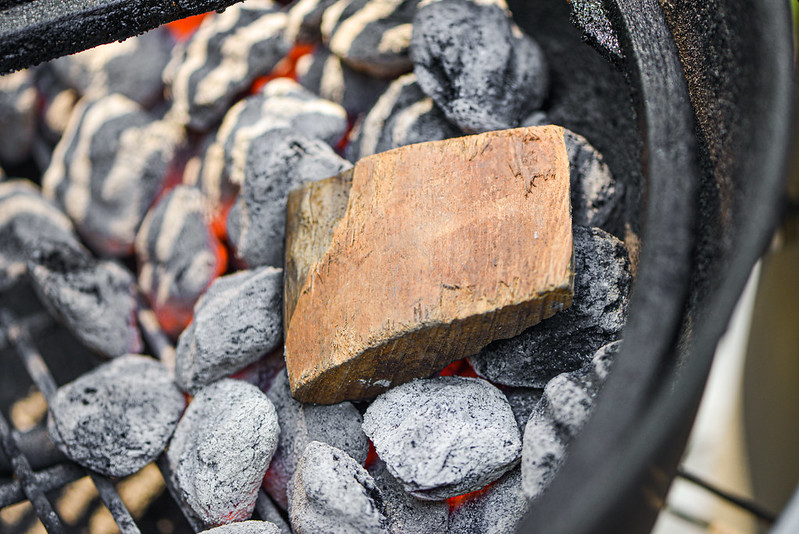 The next day I got my grill set-up for cooking by lighting a full chimney of charcoal and then arranging the lit coals into two equal piles on either side of the coal grate. I then placed a chunk of apple wood atop on of one of those stacks of coals to add some smoke into this porchetta equation because doing so with my last pork porchetta worked out so well. 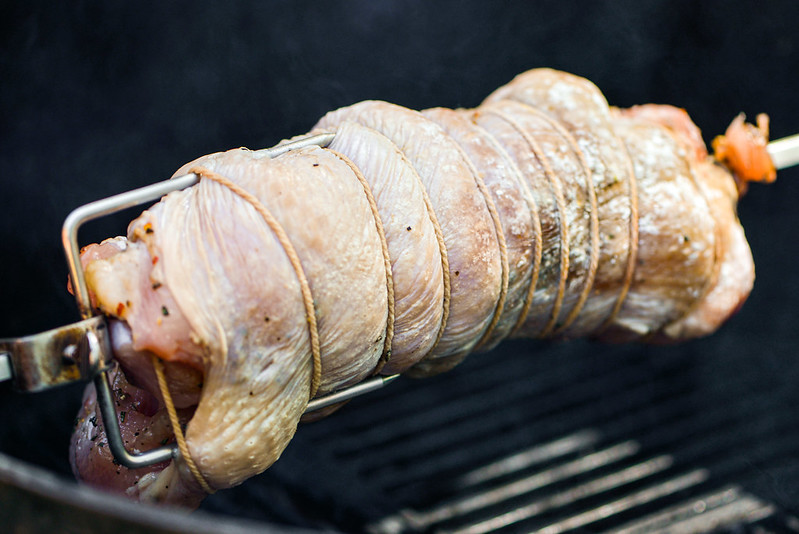 After skewering the porchetta on the spit next, I worried my rotisserie forks were going to be too large to further secure the roast, but I was able to get a sliver of one fork through a piece of meat and that did the trick—the rotisserie fork was definitely needed because the porchetta just stayed in one place without it. 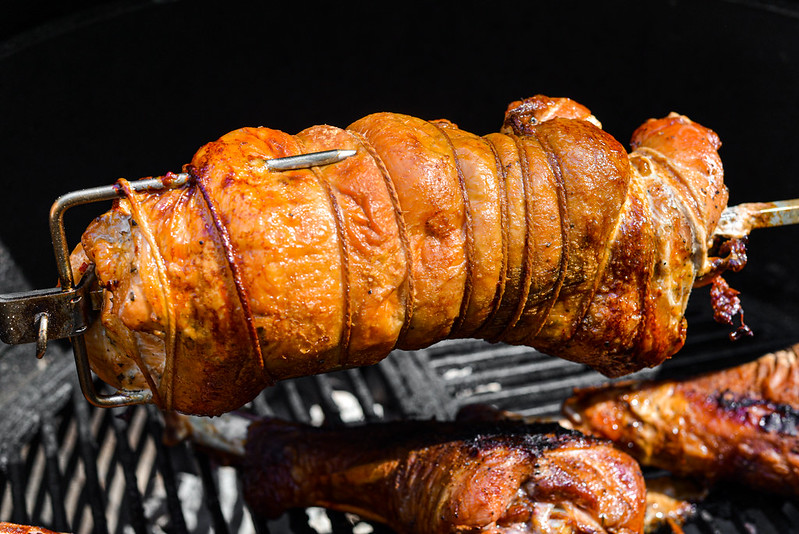 After about 45 minuted of cooking, the skin had picked up a golden hue and was pretty crisp, so I started to check the internal temperature of the meat then. I was shooting for between 145-150°F in the center, but it was still shy of that, so I kept the turkey spinning. It took this porchetta about 1 hour and 15 minutes to get to my desired temperature—it actually went a little over and I worried I may had dried it out since I'm now pretty used to the juicier results of a slightly undercooking by FDA standards. 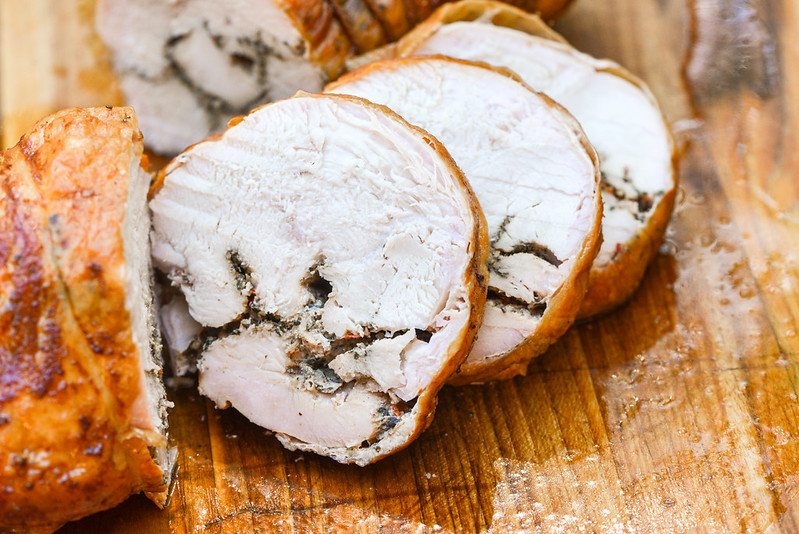 Luckily, I was pretty sure that was not the case as I saw moisture accumulate on the cutting board as it rested, and then was assured when I made that first cut and saw the juicy interior. I'm not sure I have much to say about porchetta that I haven't already said and this one fell in line with my previous positive experiences. The turkey did have a lighter touch which made the peppery kick of the seasoning stand out a little more, but also had the herbs feeling even more at home since they were akin to a Thanksgiving-style combination. I was really pleased with the thin and slightly crispy skin, as well as the mellow smokiness that I think did make this recipe a bit tastier than the last time I made this turkey porchetta in the oven. It was certainly another win for porchetta, and due to some last minute guest cancellations the day I was serving this, I had more leftovers than I was expecting, so I sliced the chilled meat the next day for sandwiches and can also report that was yet another incredible way to enjoy this truly winning dish.