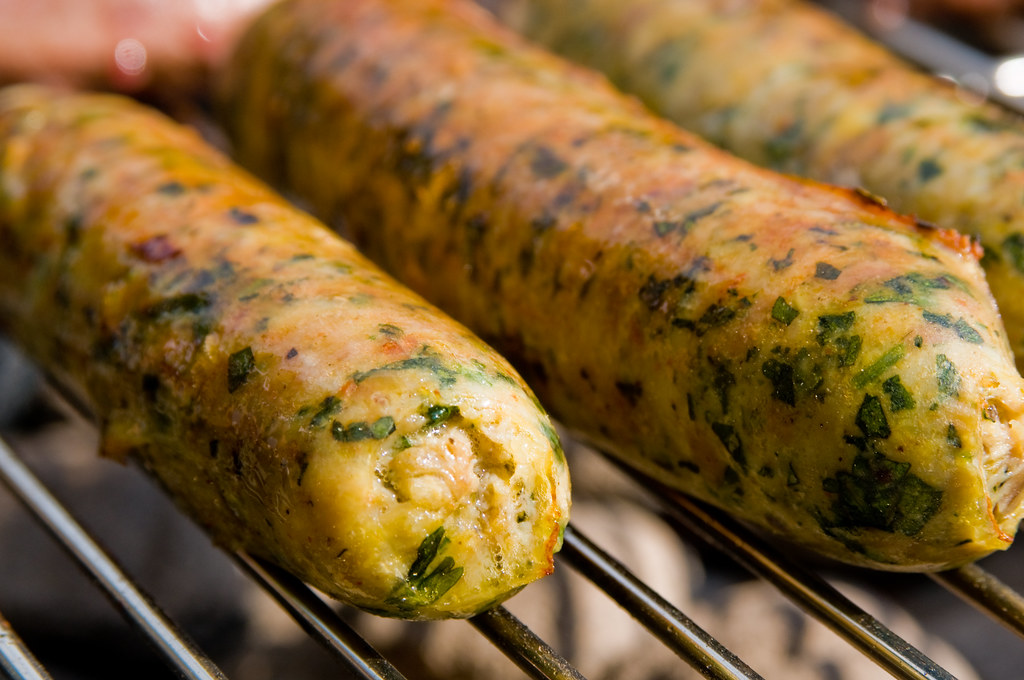 Being a creature of habit, I was comforted when an email arrived announcing that the Dr. Popsicle birthday would be returning for another year of bbq in Prospect Park. This event not only signifies the turning of age of its radical host, but also the one year anniversary of my first foray into sausage making. It seemed only fitting for me to take out the grinder and have another go, in the name of tradition and the good Dr. 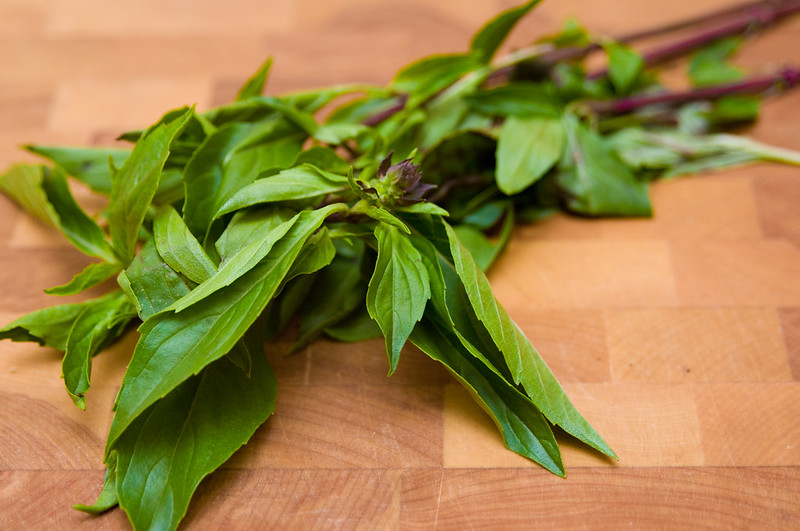 Although inspired by tradition, I still needed to switch things up to keep them interesting. Last year I went with a chicken-apple sausage, this year I decided to keep the chicken, but go Thai. The recipe I found forced me to make a journey out to Flushing on a successful search for Thai basil. After a nearly two hour trek under my belt for one ingredient, I started the sausage making process, which I'm still a bit shaky on, with a pressure to get this right. 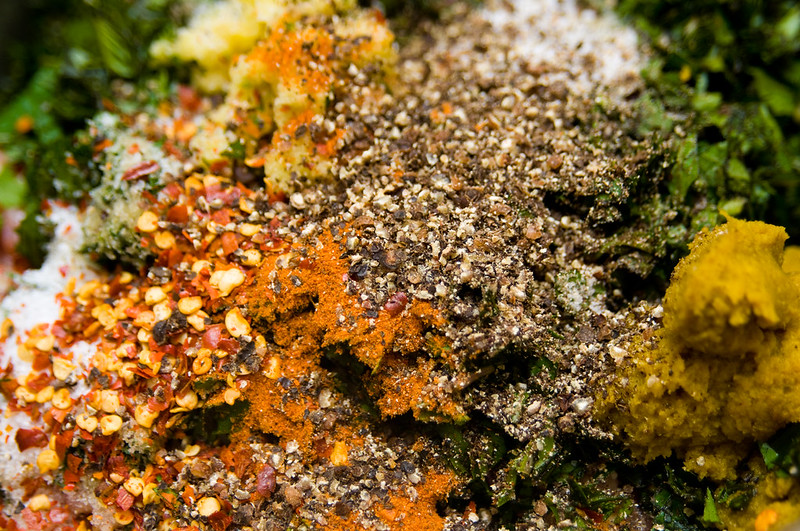 I started by prepping all of the herbs and spices, so once the chicken was ground, I could quickly mix everything together, keeping the meat as cold as possible. As each herb was chopped, and each spice portioned out, the kitchen began taking on the sweet smells of Thai. Once everything was mixed together, I fried up a test patty and all those wonderful smells transferred to my tongue; the sausage was exactly what I wanted it to be. 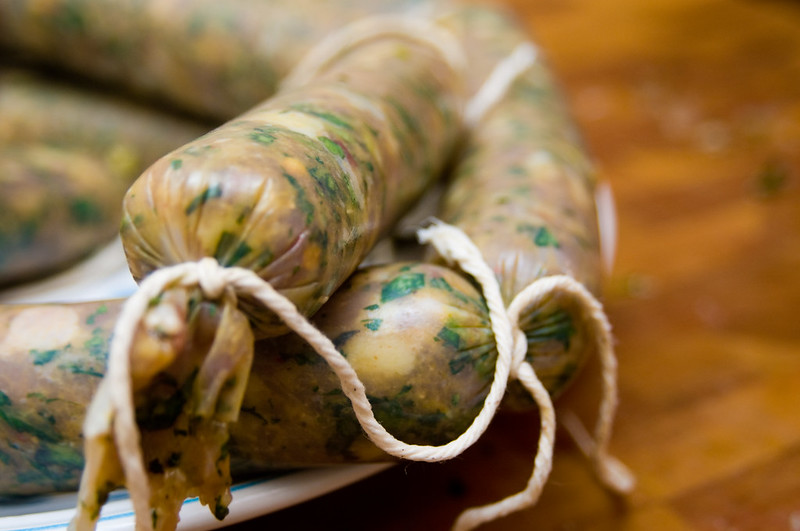 Then came the stuffing and linking, which went surprisingly well. My past experiences with this step have been filled with expletives, as I still have not acquired the finesse needed to keep the casings from tearing. I was able to stuff the sausage in one big link, no problem. I took up a different method of linking this time around, and instead of twisting them, I pinched and then tied each link with a piece of twine. In the end I only broke the links twice, which is my best effort to date. 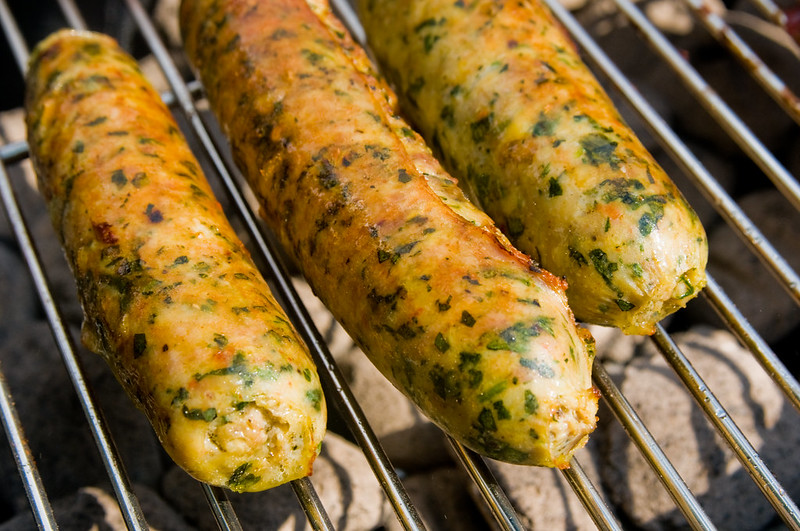 Since these sausages were going to make the journey to Brooklyn, and then sit outside in a cooler for hours on end, I decided to poach them beforehand, just to be safe no funny food illnesses got the best of them. It was at this exact moment that all of my proud work came to a crashing halt. I brought the water to 180 degrees, placed the sausages in, the water dropped to 170 and all looked good. It only took a minute or two until, one-by-one, each sausage burst right open. Despite these sausage explosions, they all held their shape, so I kept them poaching for 20 min and then took them out and hoped for the best for when they hit grill. 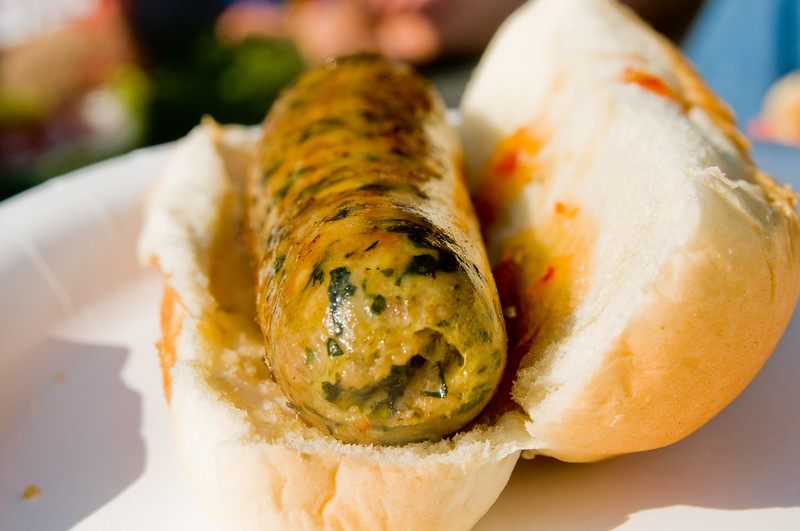 Lucky for me, these must have been some real chicken fatties. The sausages grilled up moist and delicious, ending up being a hit. I served them on a roll with sweet chili sauce, which balanced out the spiciness of the meat pefectly. If I were to do it again, I would also add some cilantro on the bun, which would round out this dish with some freshness. So it has been another year, another sausage, and another excellent birthday bash and as long as there's another one next year, you can count on me being here with yet another sausage.