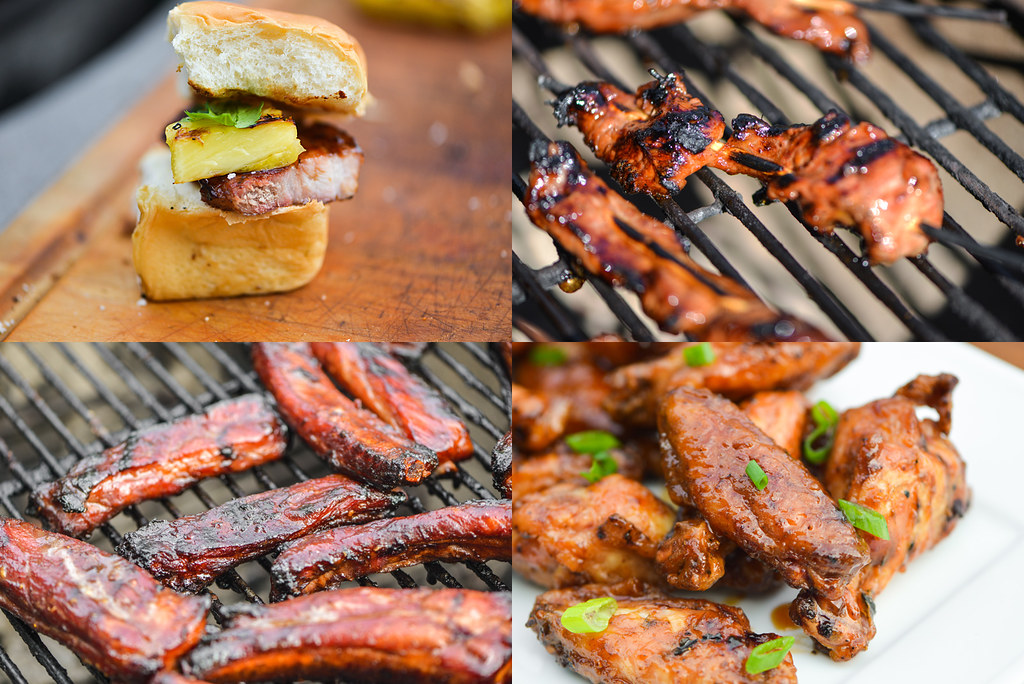 The last Meatwave was over two months ago. That's what I believe is colloquially referred to as a "bloody shame." You loyal readers may not have noticed because I've kept those meaty recipes coming consistently throughout the summer, but the last time I hosted my friends for an all out meat-filled bash was all the way back at the end of July. It had been way too long, so I rectified the situation this past weekend with an immense Tiki-inspired feast, served against the backdrop of a beautifully sunny and unseasonably warm 80 degree fall day. 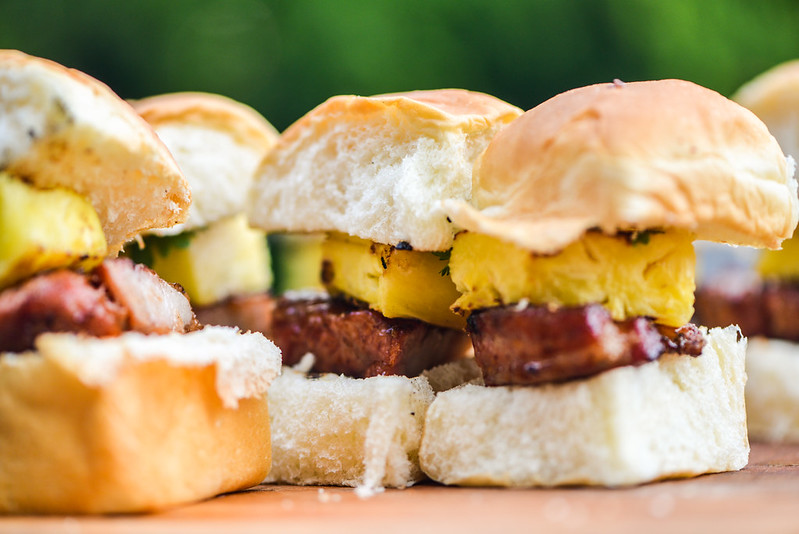 The Tiki theme was born out of my random thought that I wanted to make these. I had a vision of chili and sugar rubbed pork belly being grilled over indirect heat, then glazed with a sweet honey, soy, and hoisin sauce until glistening. Those incredibly beautiful mahogany slices of belly would be cut into squares, placed on toasted sweet Hawaiian rolls, then topped with a chunk of grilled pineapple and a sprig of cilantro. Isn't it nice when you make your dreams come true, and even better when they outlive the fantasy! 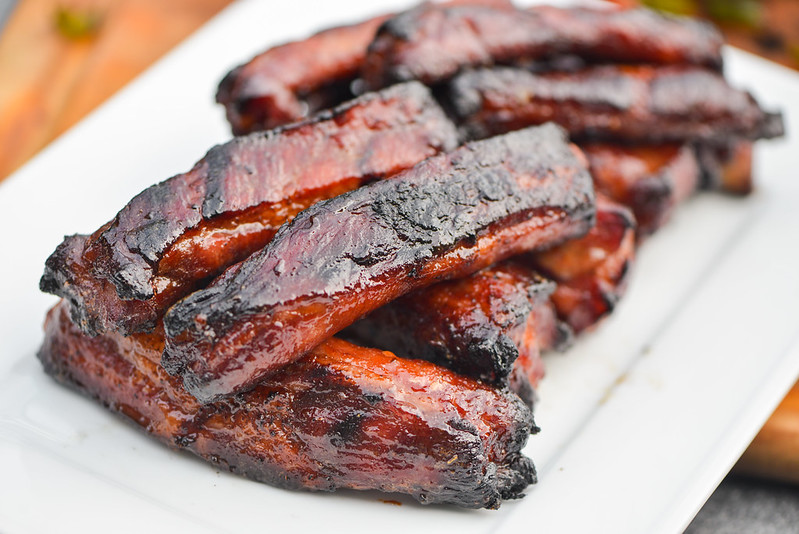 Of course I couldn't float an entire Meatwave with one dish, and once I started thinking of other things I wanted on my Tiki menu, the ideas didn't stop, and I seemingly felt the need to act on every single one. The next in line were these char siu spare ribs. If you've ever had American-Chinese takeout, I'm sure you're familiar with them already. After being marinated in char siu sauce, these ribs then went over indirect medium heat and cooked until they were tender enough to eat. They're definitely not the slow smoked ribs Meatwavers are used to, but they turned out exactly how they should—with a light chew that brought the distinct sweet and earthy char siu flavor with each bite. 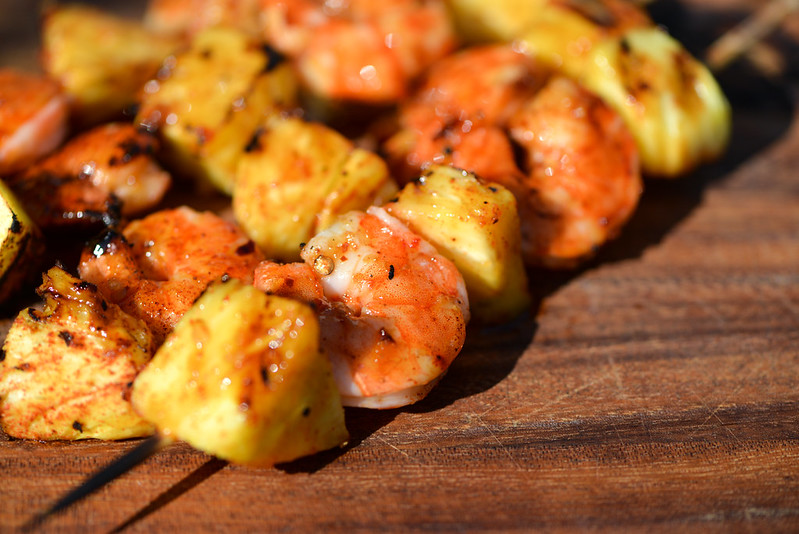 These glazed shrimp and pineapple skewers are a bittersweet story. I went through the process of skewered all the shrimp and fruit, dusting them with a sweet chili rub, grilling them, and finishing them with the same glaze that I used on the pork belly. My guests loved these skewers, gobbling them up faster than almost anything else. That's the sweet part, the bitter comes in as I was cleaning up after everyone left and realizing the bacon I bought to wrap those shrimp in was sitting in the refrigerator, unopened. 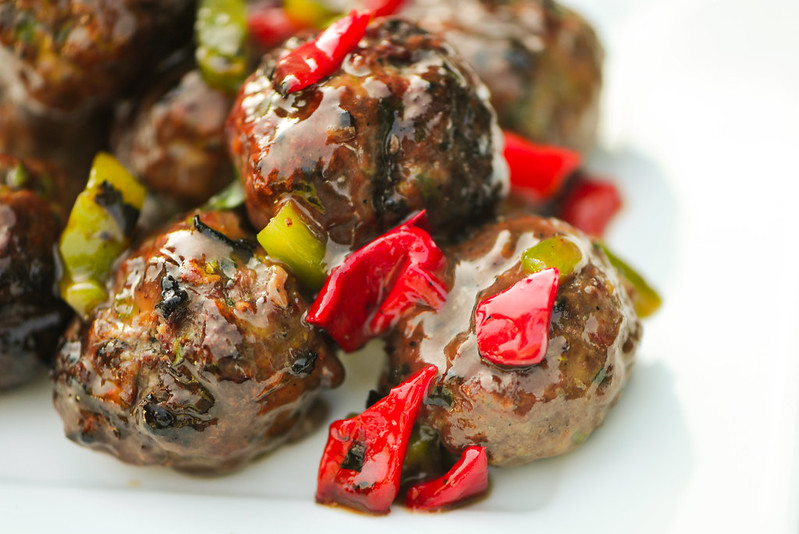 Just because I hadn't had a Meatwave doesn't mean I haven't been grilling. The weekend prior to this one, I worked on a recipe for tsukune—Japanese grilled chicken meatballs. They turned out so great, I wanted to share them with everyone, but decided to take the meatball idea and go a different direction with it by creating these sweet and sour meatballs. Taking influence from tsukune, I seasoned the meat with ginger, garlic, and scallions, but swapped the chicken for more forgiving beef chuck. After grilling the meatballs until done, I then tossed them, along with chopped grilled bell peppers, with a standard sweet and sour sauce. I can't say it was the most appetizing dish I created in terms of appearance, but the flavor was spot on and they won over the crowd. 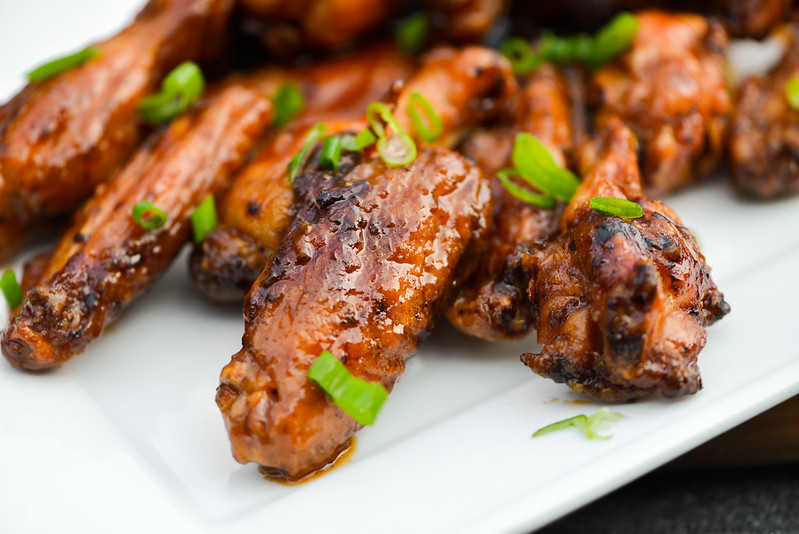 The next item to pop in my head were these Tiki wings. A few summers ago I tested out a Huli Huli chicken recipe that left me thinking the pineapple and ginger sauce that was used as a finishing glaze would make really great wings. That sauce fit the theme perfectly, so it only made sense to add this item to the list, and I was glad I did because these were probably my favorite meat of the day, but I'm a total sucker for wings. 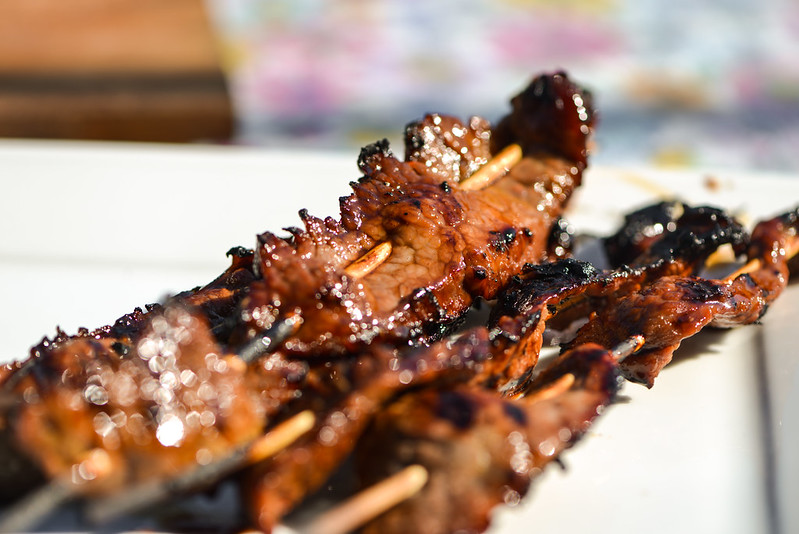 Finally I wanted to add a batch of teriyaki skewers, which was a recipe I tried out previously as well and knew was awesome. I picked up three pounds of flank steak, sliced it thinly against the grain, then marinated it a teriyaki/pineapple juice mixture. On the grill they cooked up in mere minutes, and were finished with a teriyaki glaze that left them shiny and salty-sweet delicious. 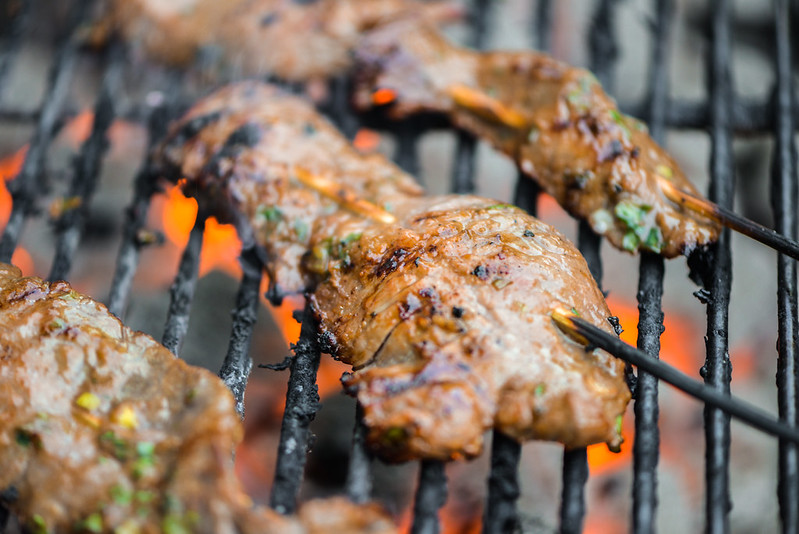 For some reason I couldn't leave well enough alone, and as I sliced the steak for the teriyaki skewers, had an urge to make these Asian beef skewers as well, another one of my personal favorites. So I ended up dividing that sliced flank up in two, marinating the second batch in a hoisin based sauce that grills up to be an incredible match to the beef flank, giving it a deep sweet, fermented flavor. 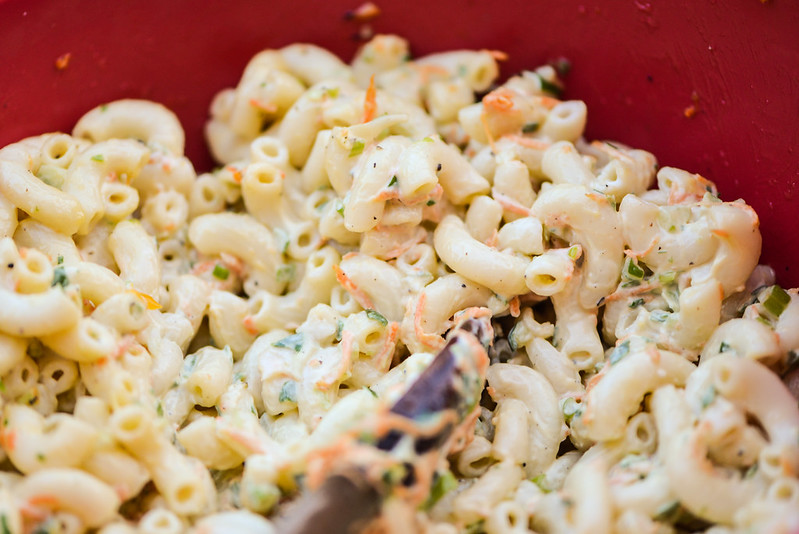 Whew, that was one hell of spread—seven unique meats to make up a grand Tiki feast. You can imagine after prepping all of that I was bit tired, so I went easy on the sides. The only thing I cooked up was this Hawaiian macaroni salad, because I thought it would be a big whole if this extra tangy and creamy salad was not part of the menu. Treyci then brought the perfect compliment, Hawaiian coleslaw. 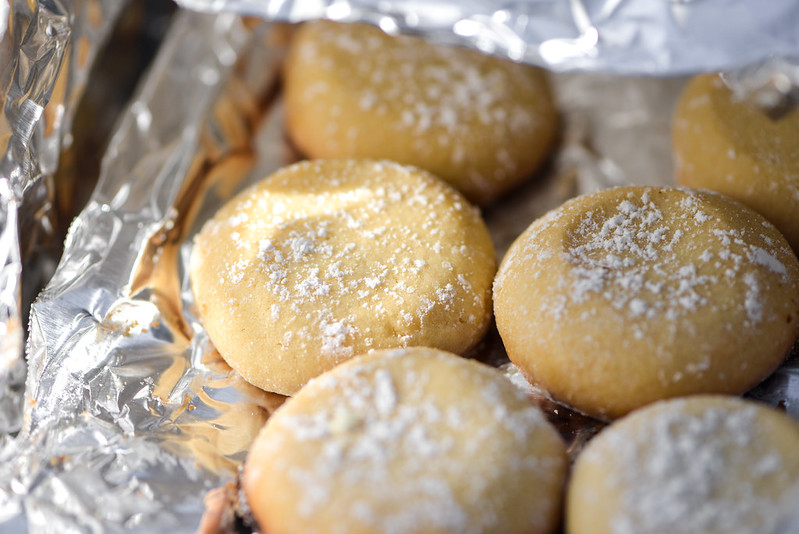 The Sirabian sisters came in tow with a giant shoebox filled with these Armenian cookies to start off the desserts. As much as they wanted people to believe they actually brought shoes, that didn't stop even one Meatwaver from peering inside and uncovering the vast sea of cookies that awaited them. 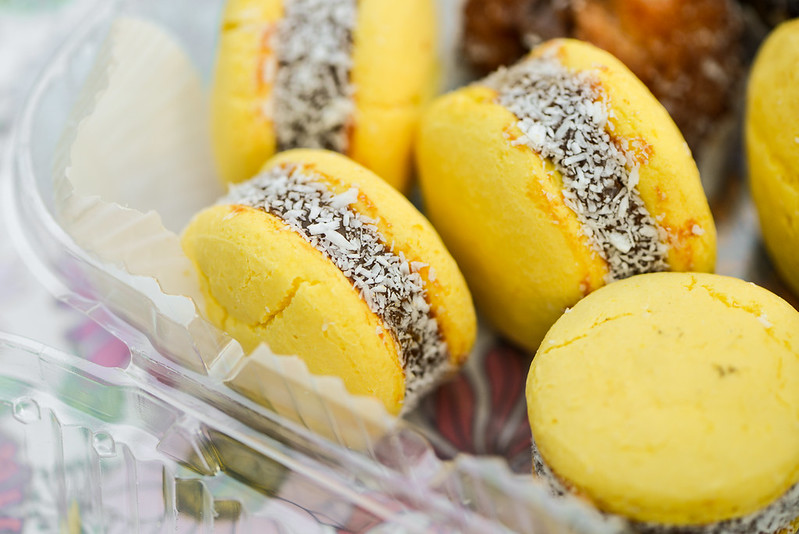 New Meatwave Ian brought a box of Uruguayan treats, which included these totally awesome alfajores cookies. The super light cookies on each end were held together by a creamy and thick dulce de leche center. I actually ate one of these before the meat even began flowing because I knew they wouldn't last long around these parts. 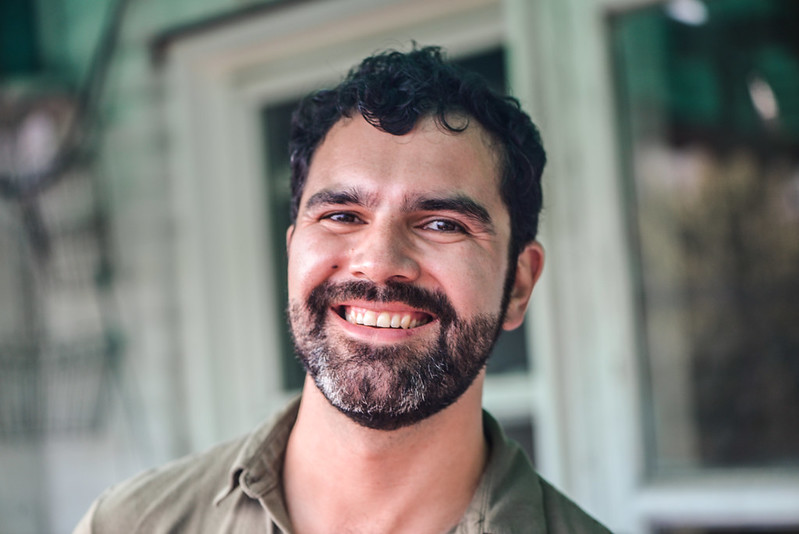 And here's the man responsible for unleashing those addictive cookies on us, Ian. The wife and I randomly met Ian at a party early in late spring and have tangentially kept in touch since then. It was great to have him out at the Meatwave and catch up after the long, busy summer. 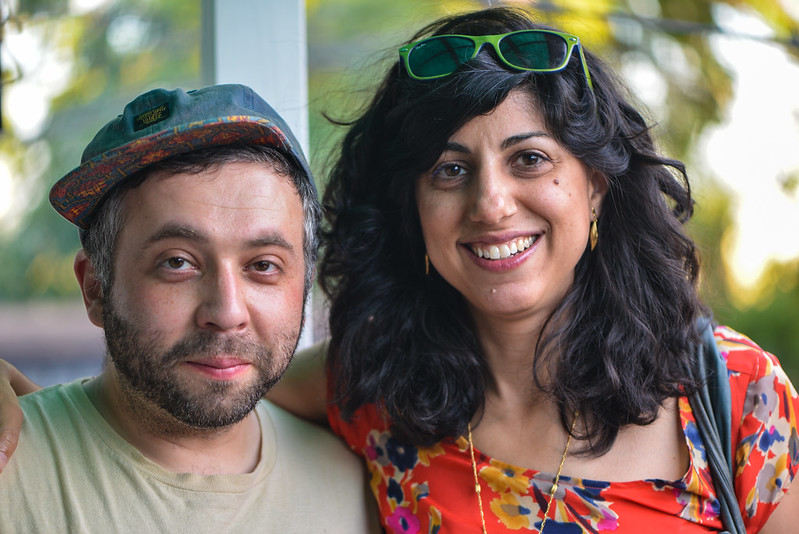 Next we have Jonny and his friend. Jon and I go way back, so far that he was my counselor at camp. I recently dug up a card Jon created at a truck stop business card machine during a day off at camp. It simply states "Jon T...I'll fix ya real fuckin' good..." It's safe to say that this card still holds true 20 years later. 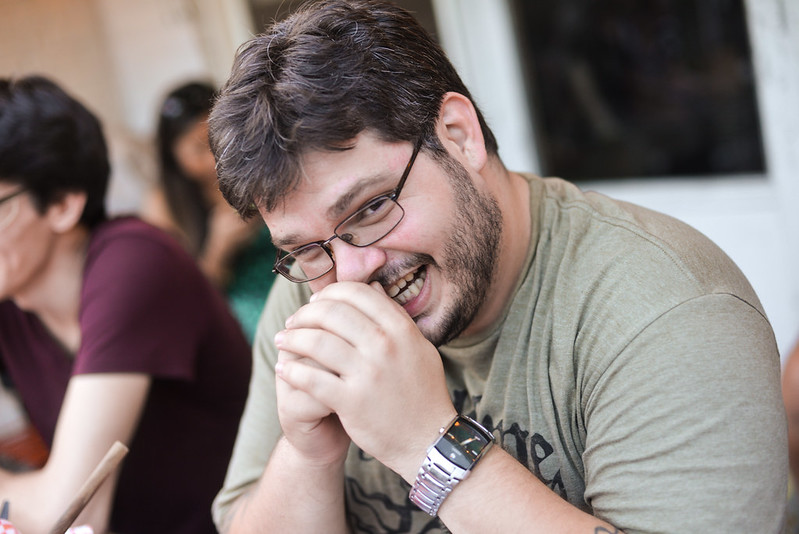 Here I caught Joe in the middle of cracking up about something, have no idea what. 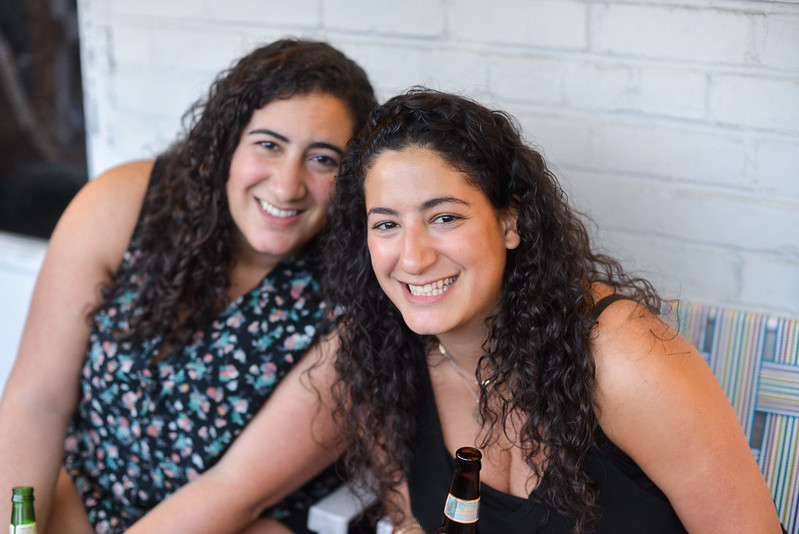 I'll save Christina the embarrassment of posting the photo of her donning a pig snout and waving her hands behind her head as if they're pig ears. Instead this is probably one of the more tame photos of Christina and her sister, Steph, both of whom have brought extra fun and laughter to the past two Meatwaves. 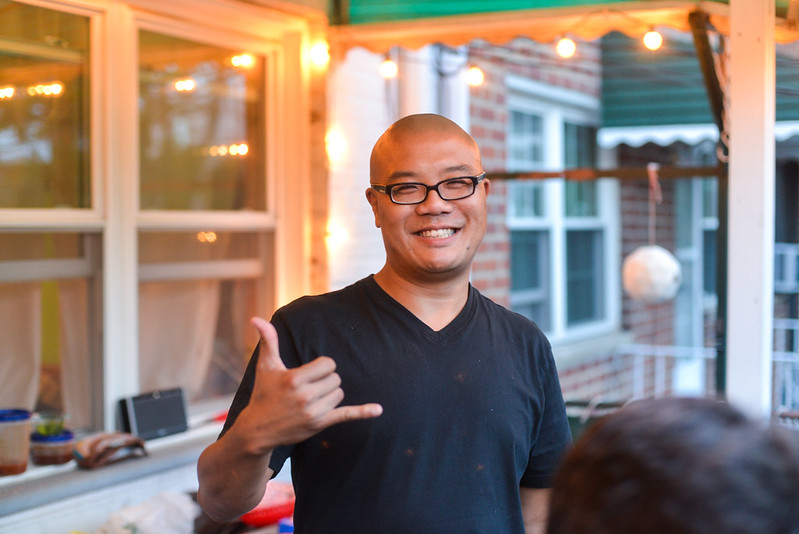 I didn't quite believe it was true when I got a call from Tyson saying he was downstairs. Tyson has been busy working on his new barbecue joint, Arrogant Swine, which is only a week away from opening. I've heard the tales of the endless 16 hour days he's putting into the project for about eight months now, and just figured he wouldn't make it to any Meatwave this summer as a sacrifice to his own meaty ambitions. It was a pleasant surprise then for him to show up and regale us with stories of construction wows, custom built pits, and what is shaping up to be a carnival of an opening—there will be a tattoo artist, paid in booze, giving out real tattoos...brilliant. 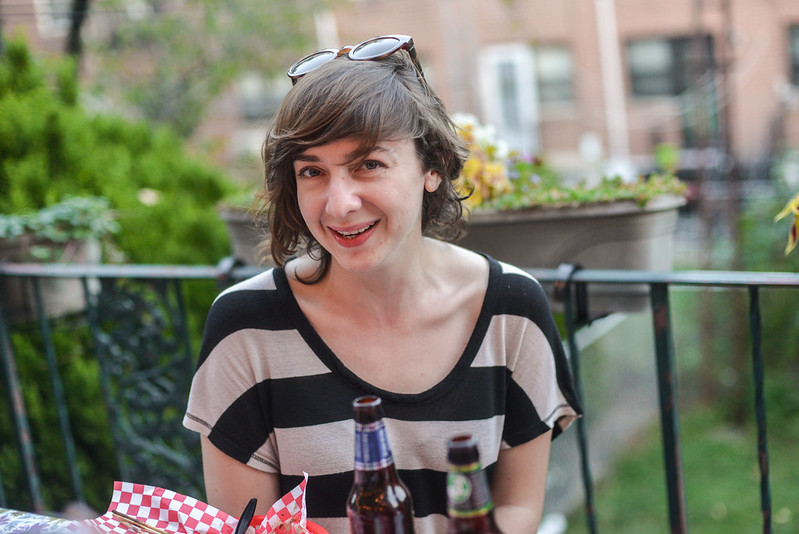 It's always a pleasure to host Anna, who threw here own Tiki party earlier this summer that I sadly missed. We recounted the Meatwave last year where I got so wasted that I have no recollection of over half the events that transpired. Good times. 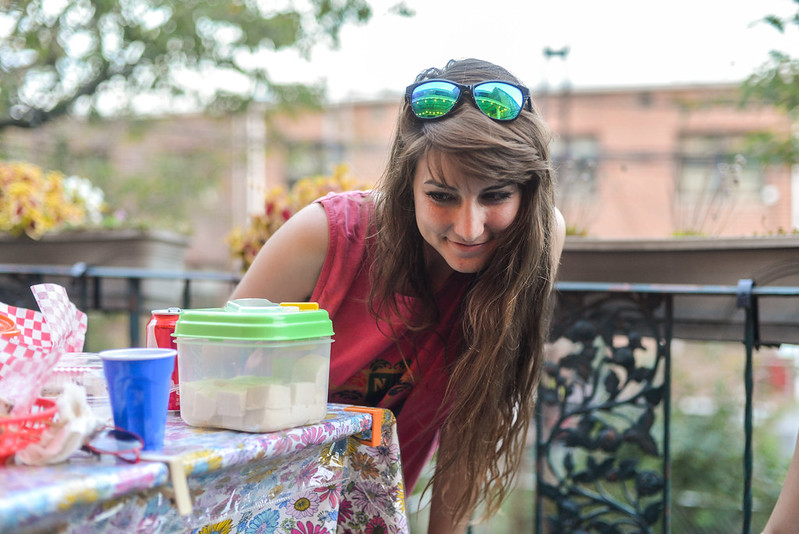 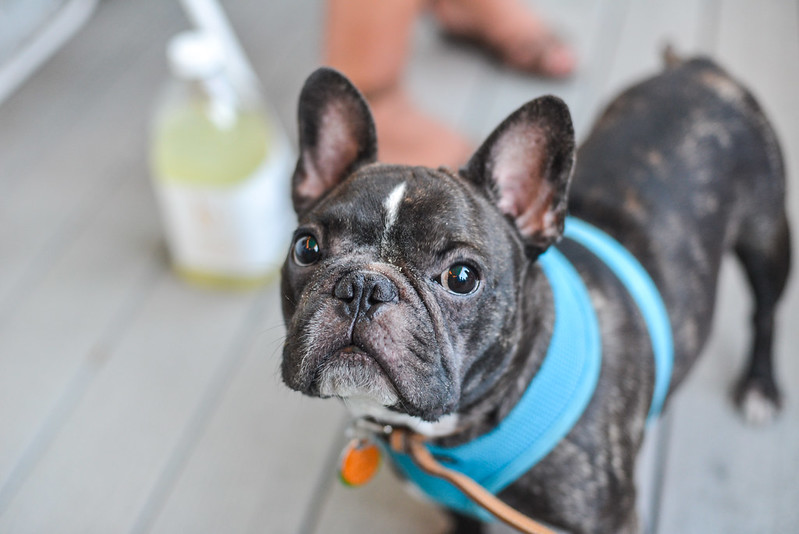 ...and it's Pork Chop! Best Meatwaver ever. Sorry everyone else, but you know it's true. 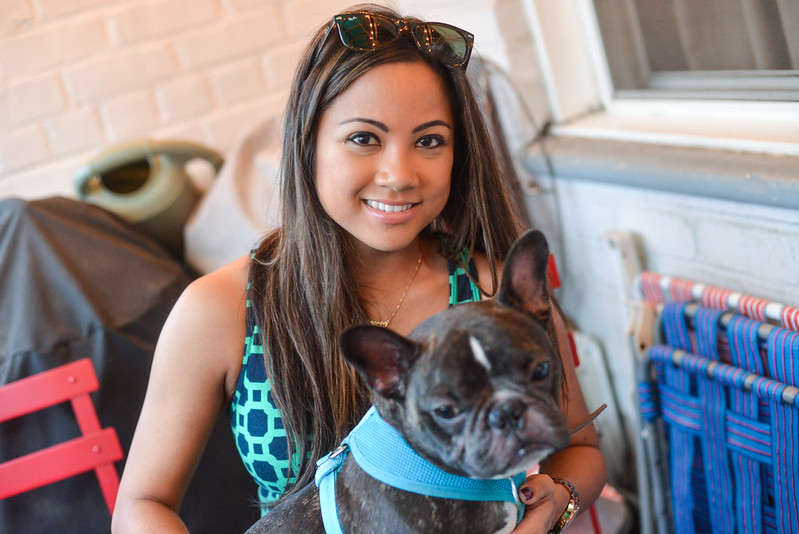 Of course Pork Chop didn't roll in alone, he dragged Treyci out with him. Luckily Treyci has returned to Queens after a few misguided years in Manhattan. I now have another neighbor to call on to help me eat all the food I cook outside the Meatwave, which is something is harder to do than you'd expect. So I'm asking, don't you want to be my neighbor too?