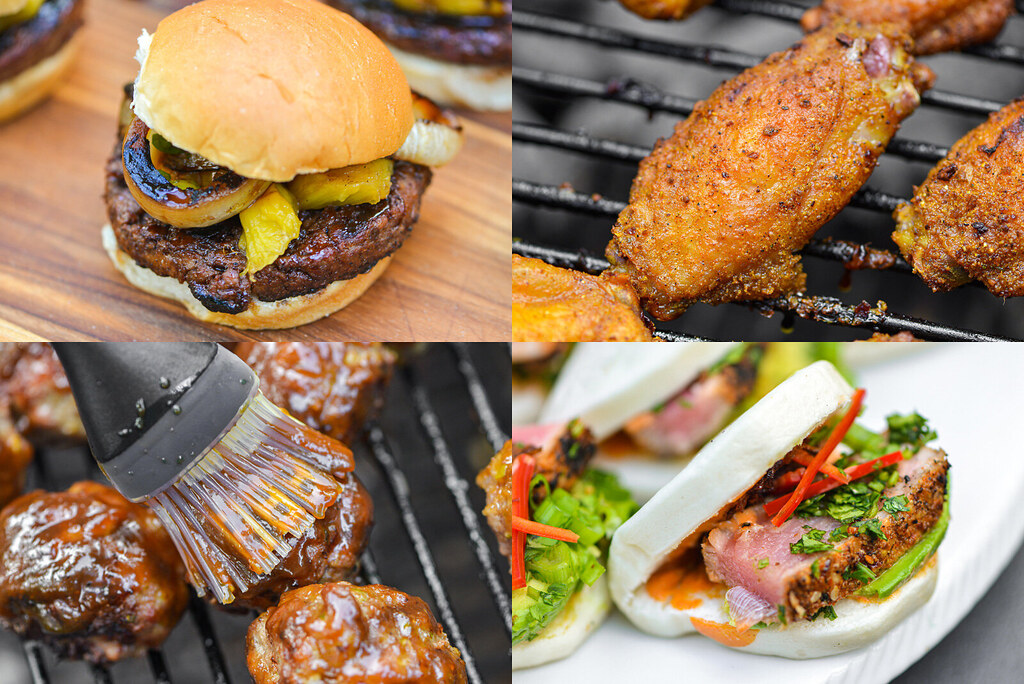 The dead of summer is so unpleasant here in central North Carolina that I suspend The Meatwave during it because it's not much fun sweating it out in the heat and humidity when there's no real reason to do so. I had planned to get my cookouts started up again when cooler weather begins in late August, but a Covid sickness plus unforeseen plans had me rearranging my schedule so much that October was the next time I would be able to play host unless I sucked up my distaste for the heat and gave it a go in the season that would be more aptly named "hell on earth." I did make some adjustments to my norms though for survival purposes, like starting as the temperature and sun began to dip in the evening, and adding on a karaoke component for extra fun and to keep the good times going well into the night. 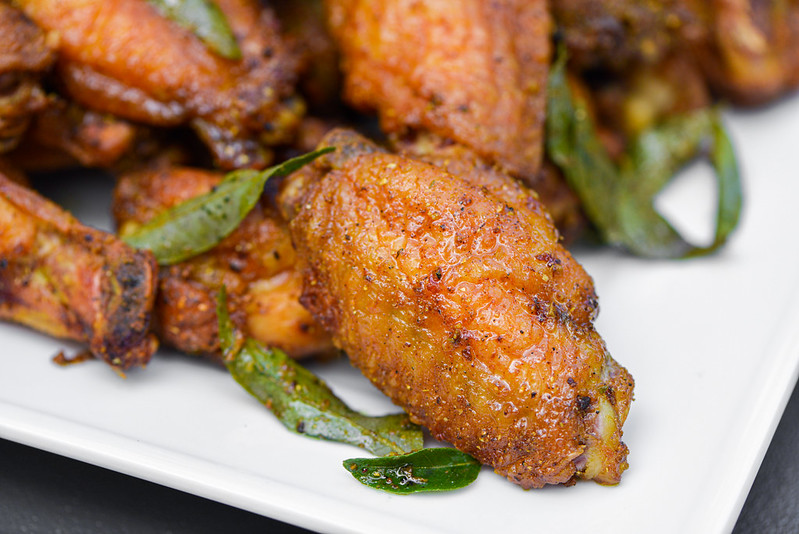 The tiki-themed Meatwave of a few years ago was such a hit that I've had it on my radar to do a repeat, and this was that time. The dishes ventured further from standard tiki fare than before, but you can see the influence in most of them like these crispy curry wings. I created my own Japanese-style curry powder that got applied to chicken wings both before and after cooking to give them an incredibly deep and complex flavor that was made all the more intoxicating when tossed with curry leaves, which amped up the aroma. 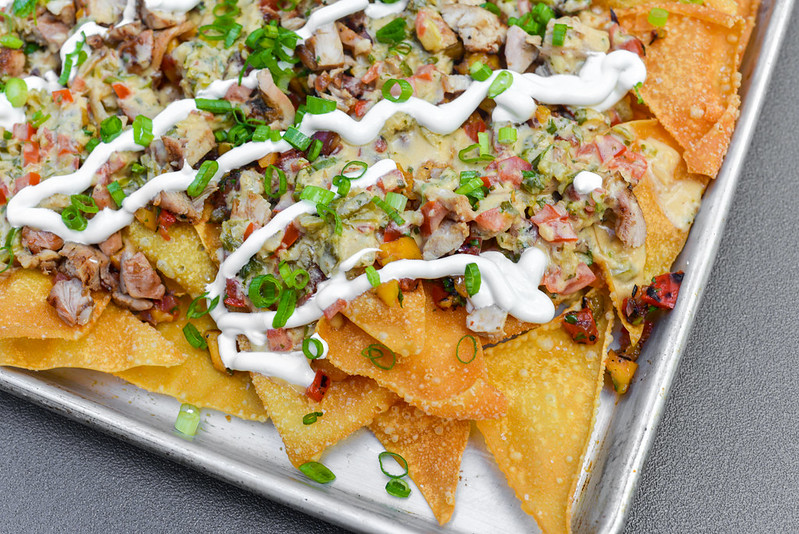 I made my family a tiki Christmas dinner this past year that included mango chicken wonton nachos as part of the festive meal. Those were such a hit with the fam that I knew they were going to have to make a Meatwave appearance, and this was the most fitting day to do so. There was double mango action going on in this dish with both a grilled mango salsa and mango-glazed chicken that got adorned on top of fried wontons and also joined by queso and sour cream. 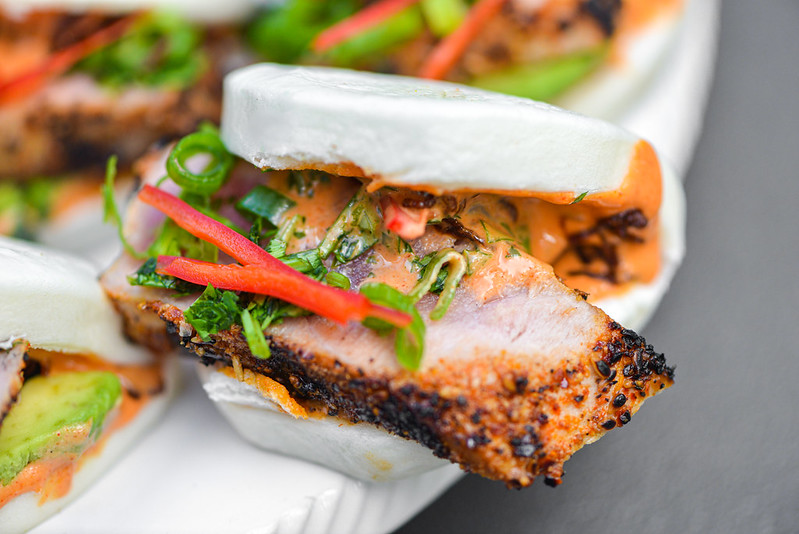 Seafood is definitely a lacking genre on this site because I just don't have a taste for a lot of it, but when it's done up in dishes like these spicy tuna baos, I'm all on board. A pepper heavy rub on the tuna started the heat, which was built upon by a gochujang mayonnaise and strips of fresno chiles. An avocado slice helped temper the spiciness a tad, while cilantro and scallions brought in a touch of freshness in one damn tasty treat. 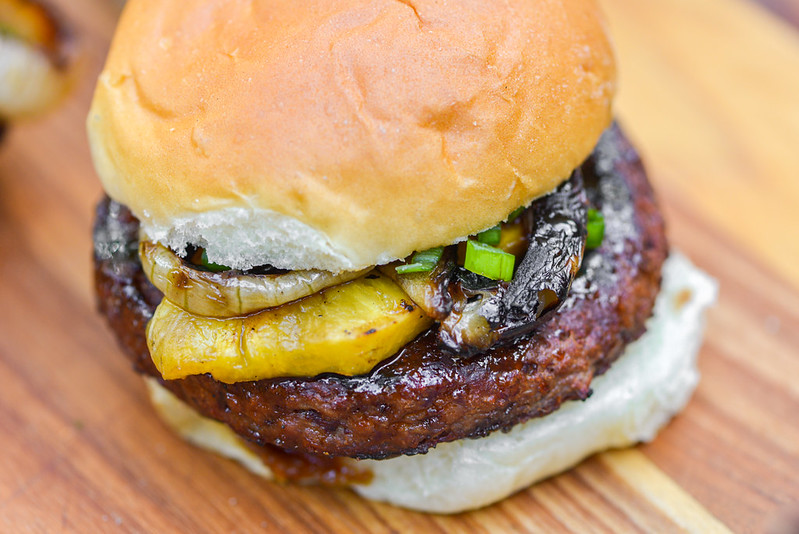 My last Meatwave was a hot dog and burger affair, for which I had bought a lot of Impossible patties for the vegetarian constituency that ended up going mostly uneaten. Looking for a way to make use of those, I conceived of these teriyaki veggie burgers where the savory and sweet sauce was well paired with grilled pineapple, grilled sweet onions, and scallions. 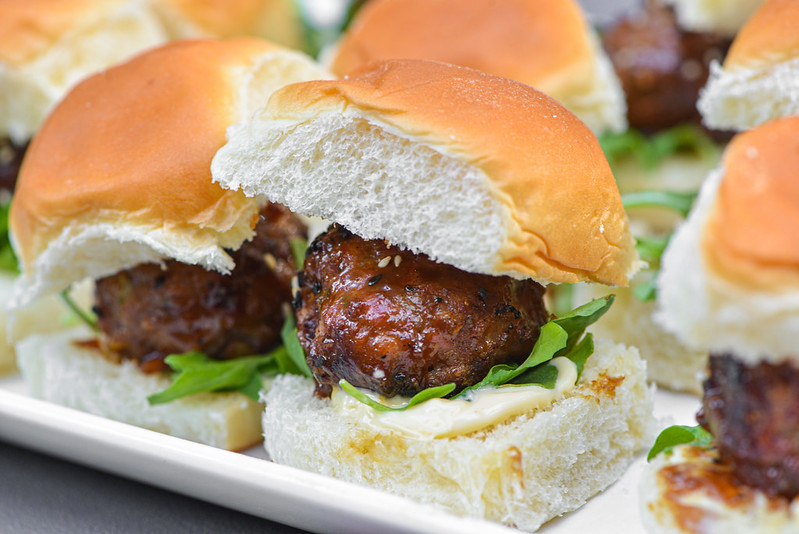 The last meat to hit the grill ended up being the highlight of the day—miso-glazed meatballs. These were meatballs with the savoriness turned up to eleven with miso going into the meatballs and then also brushed on at the end as part of a sweet and salty glaze. Kewpie mayo just built upon the savory elements and extra sweetness was introduced by serving them on Hawaiian sweet rolls. 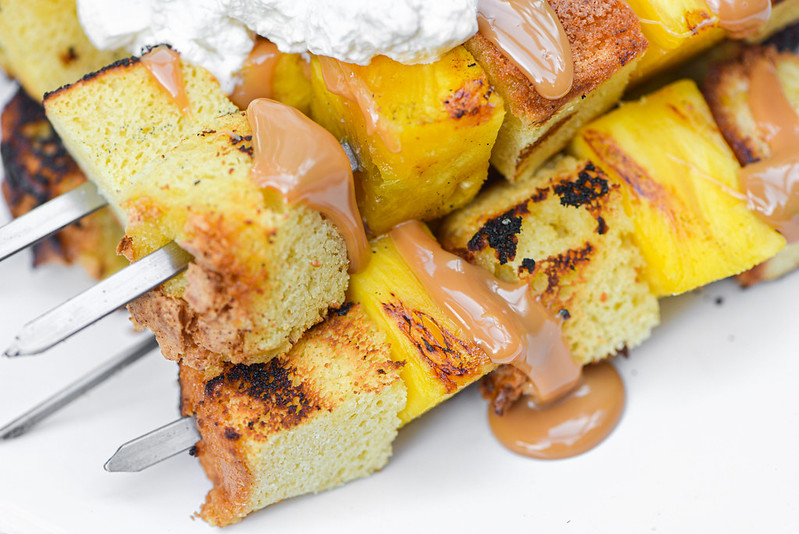 I haven't been doing a lot of desserts lately, but I knew I was going to have extra pineapple and thought using it on skewers with pound would be a good idea, and it was. To give the recipe a little more complexity, I introduced dulce de leche and whipped cream after the skewers were grilled, and I think the whole thing came together in a really nice way. 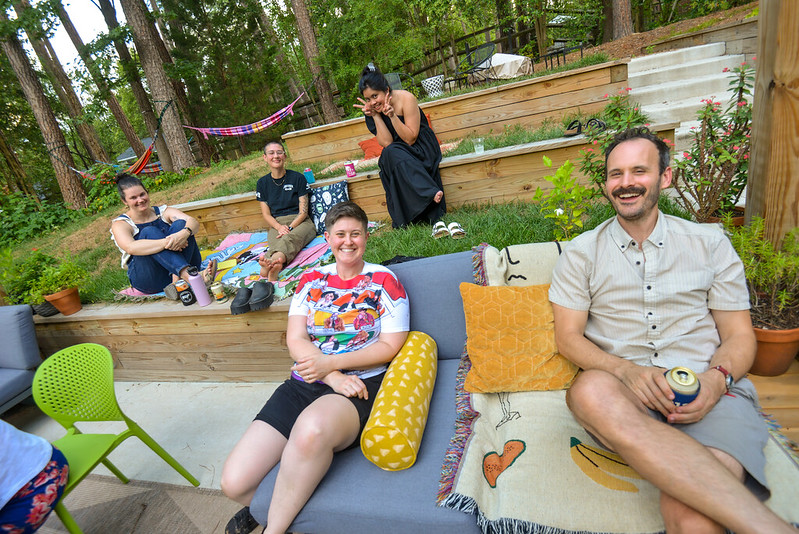 I had made an assumption the heat would keep most folks from attending, especially since there's still a couple more Meatwaves coming in the fall, but I was proven wrong when we had our largest crowd since getting back into the swing of things following peak pandemic times. I've been able to capture most attendees in a single photo lately, but this Meatwave had me back to taking many snaps to get a good sampling of my awesome friends, starting here with Evan, Christina, Kristin, Kelly, and new Durhamite Michaela. 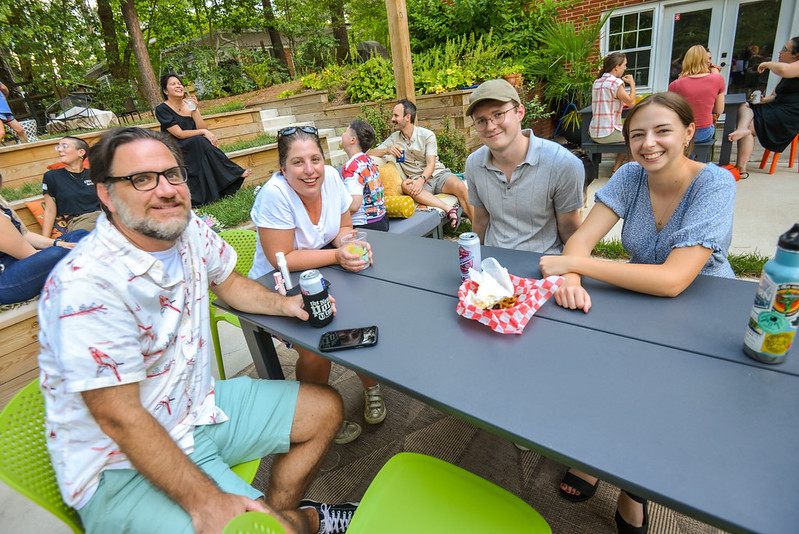 Now we move on to Lindsay and Chris on the left, and Evan, and his lady on right. The later were in town from Charlotte and it was great to be able to host them. 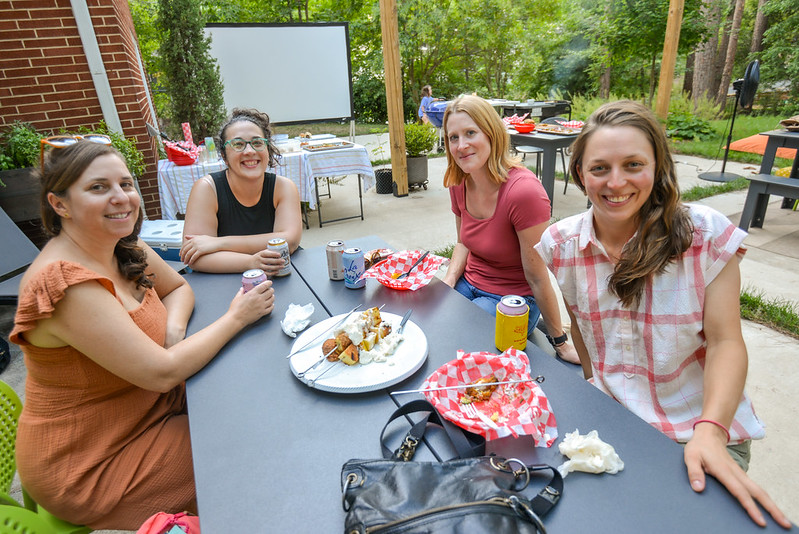 At the next table we have Jenny, Kaitlin, the birthday girl Lindsey, and Meredith. Meredith gets extra points for bring along my biased opinion of who the greatest Meatwaver is... 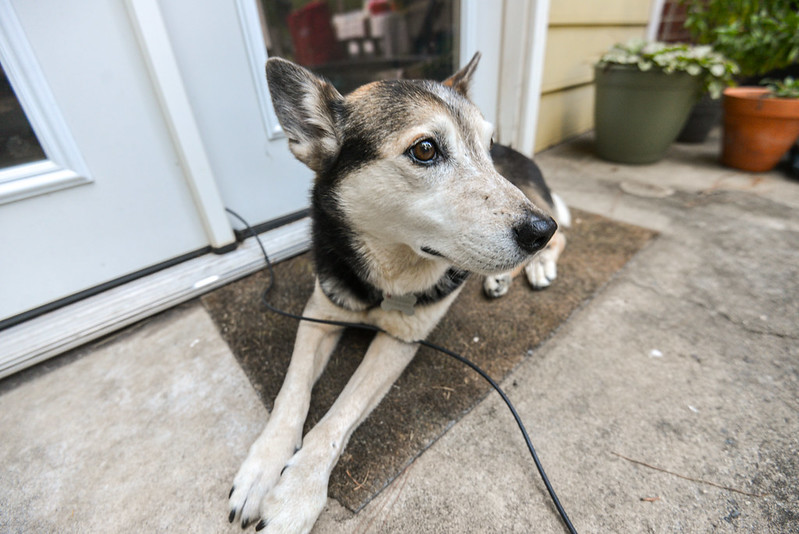 Betty! I always know it's going to be a good day when Betty comes running down the hill excited to be part of the festivities and bring happiness and joy to all. 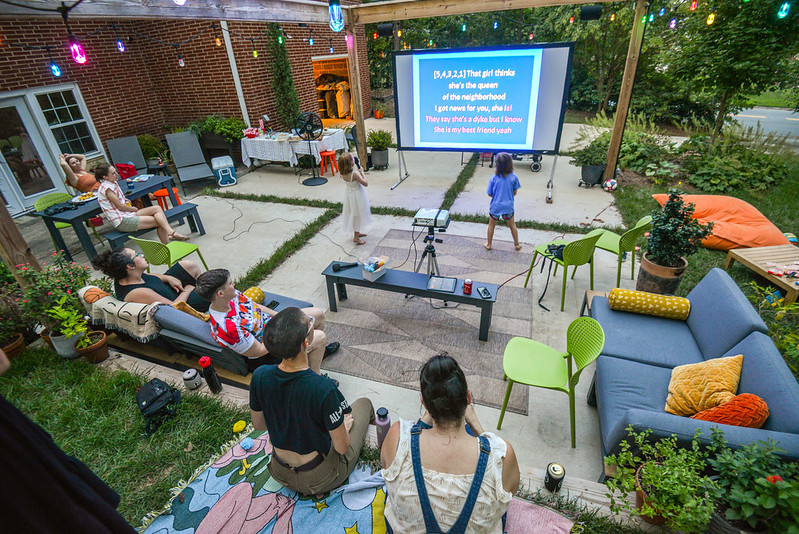 As the sun began to set, we moved away the tables, set up the projector screen, and jumped right into a karaoke session for the books. Alice and Annie got us started with a some great choice tunes, and even after the day went past their bedtime, we had a core crew stay and keep singing all the way to around 11:00pm. Luckily no neighbors came out to complain about our most wonderful signing voices filling their homes in the late hours, letting us put a great cap on a pretty incredible Meatwave that proved to me that maybe I don't have to completely halt the cookouts in the summer, just adjust my strategy to make them doable. That, in turn, also makes them kind of different and extra fun in their own special way.